Team X44 continue their 100% record as the fastest qualifiers in every Extreme E event to date after winning their race in qualifying two.

Sebastien Loeb and Cristina Gutierrez built on their second-fastest individual run in qualifying one to then see off a stacked field in the five-car heat to earn their sixth consecutive top qualifier accolade.

Reigning champion team Rosberg X Racing were fastest in Q1 and beat Andretti United Autosport on the line in Q2 but incurred a 17-second penalty after new recruit Mikaela Åhlin-Kottulinsky was caught speeding in the switch zone. That promoted Andretti United up to first in their heat, and second fastest qualifiers overall, with RXR having to settle for fifth place overall. 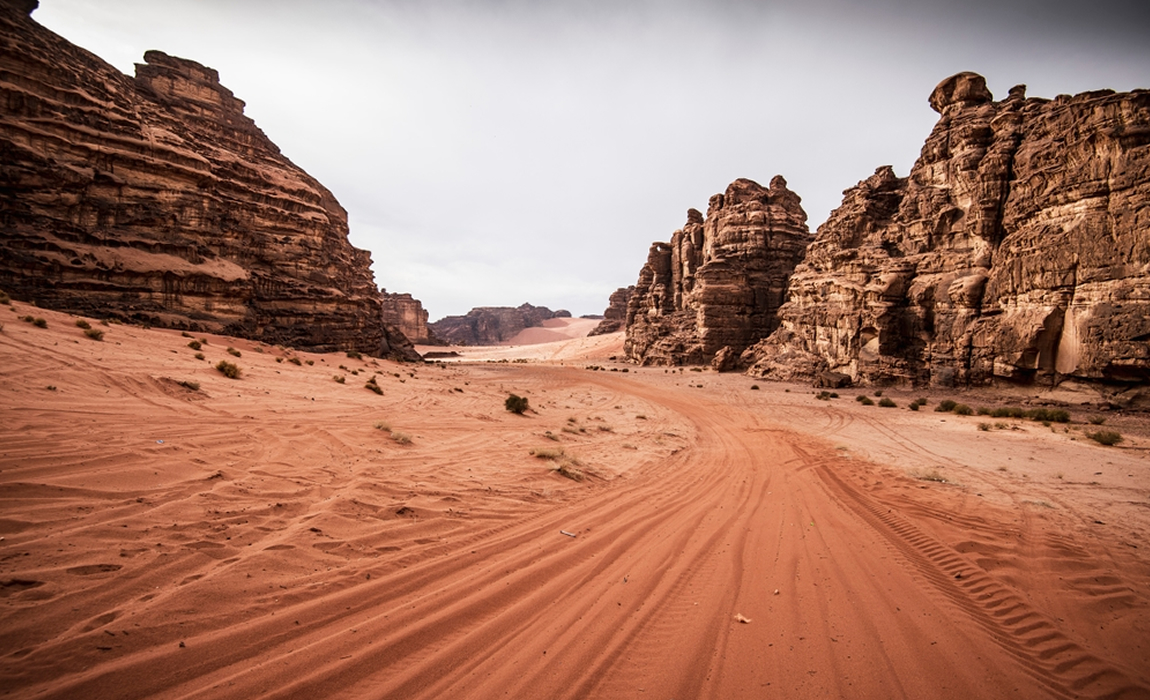 Q1’s format was unchanged from last season, with each team getting an individual run on track, with a view to posting the fastest time.

Rain midway through the session caused some havoc as the desert sand became much rougher and bumpier, and a steep drop heading towards the switch zone caught several teams out as they couldn’t get the car slowed enough. Nasser Al-Attiyah missed the switch zone altogether, and had to double-back on himself, costing him and his ABT Cupra teammate Jutta Kleinschmidt dearly, as they qualified in eighth.

However, the big story from the session was Christine Gz’s massive roll, which broke her foot and caused damage to the Veloce Racing car that was too great to be fixed ahead of Q2. At the time of the crash, she and Lance Woolridge had propelled the car up to P1 with just a few corners left to navigate, so despite the crash, there were reasons to be positive in the Veloce garage. 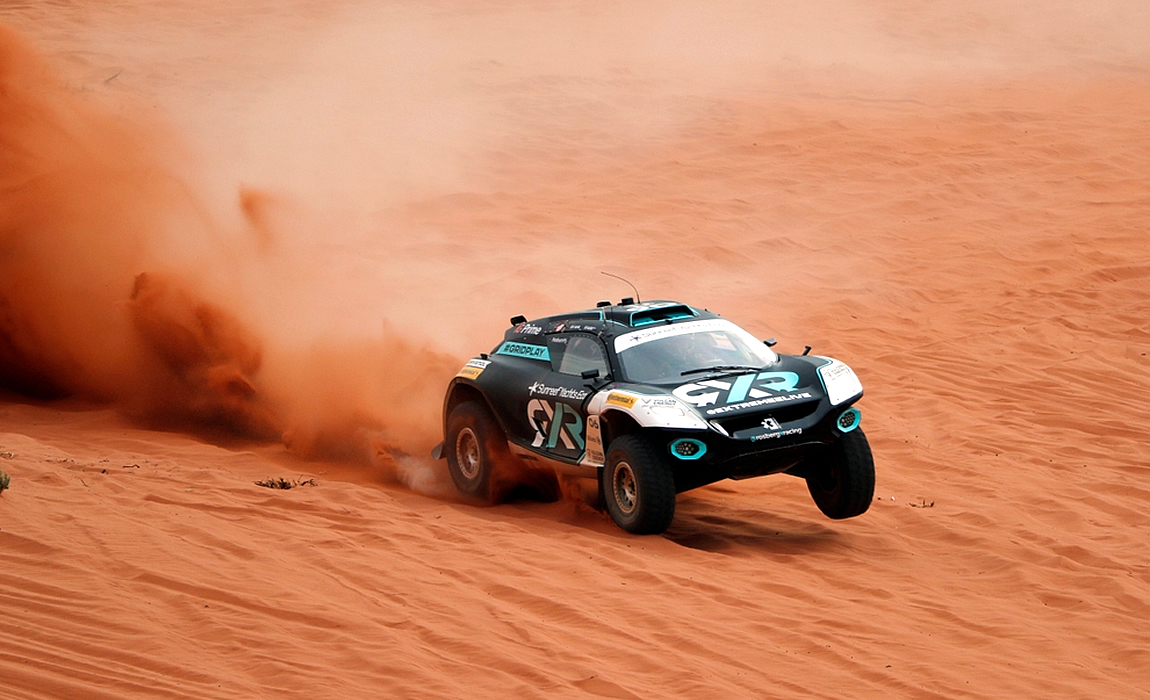 A new format for Q2 saw the field divided into two groups of five, based on their finishing position in Q1, to race for further points and decided the overall qualifying standings.

Heat one saw Dakar rally rivals Loeb, Al-Attiyah and Carlos Sainz Sr all take the start together, alongside Chip Ganassi Racing’s Sara Price, with the Veloce team ruled out due to the damage sustained in Q1.

Loeb led Sainz from the start, with Al-Attiyah battling with Price behind before the Qatari driver began to close in on Sainz. A move down the inside of his Spanish rival saw Al-Attiyah briefly in front, but he couldn’t reign the car back onto the course as he shot wide at the exit of the corner. 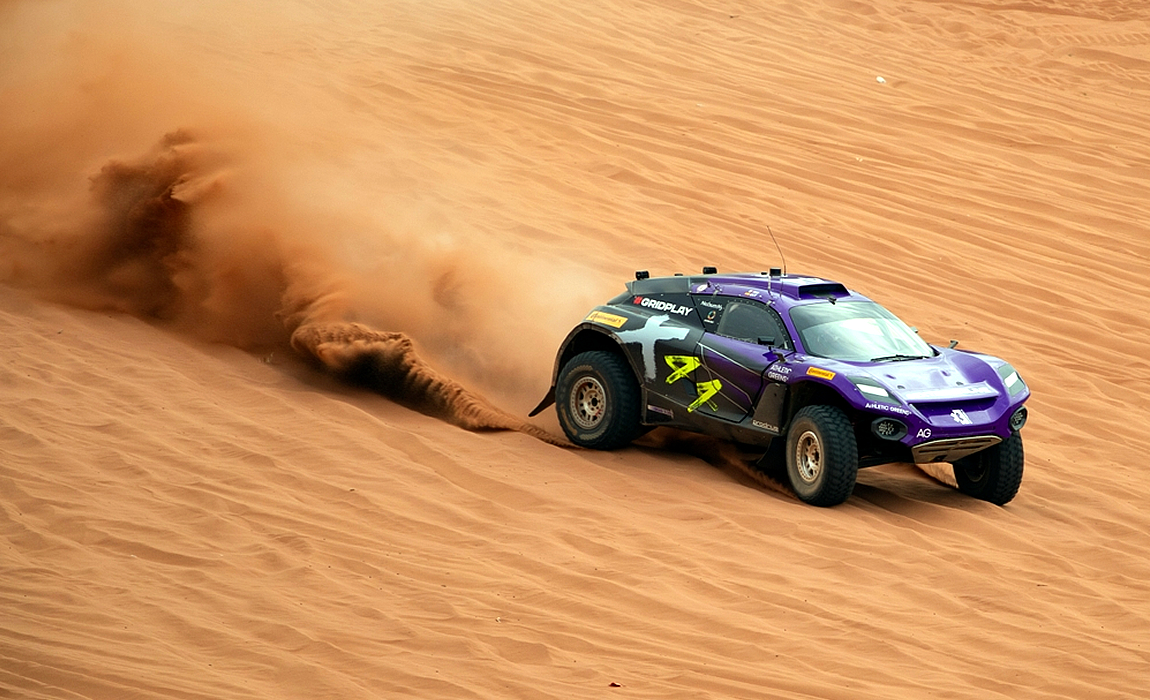 The 2022 Dakar Rally winner kept the throttle open, as the car lifted onto two wheels, skidded around the outside of a track marker, and veered back onto the course, straight into the side of Sainz’s car.

Sainz was knocked off the course and forced to limp the car back into the service area, whilst Kleinschmidt received a car with no power steering to try and finish the race. She was inevitably caught by Chip Ganassi’s Kyle LeDuc, and with Acciona Sainz and Veloce Racing both unable to finish the race, ABT Cupra took third place in the heat.

In Q2, an error from Emma Gilmour in the switch zone saw the brand-new McLaren car fall down the order as she struggled to restart the car.

Catie Munnings was therefore handed a huge advantage heading into the final lap, but reigning Extreme E and World RX champion Kristoffersson was determined to close the gap. 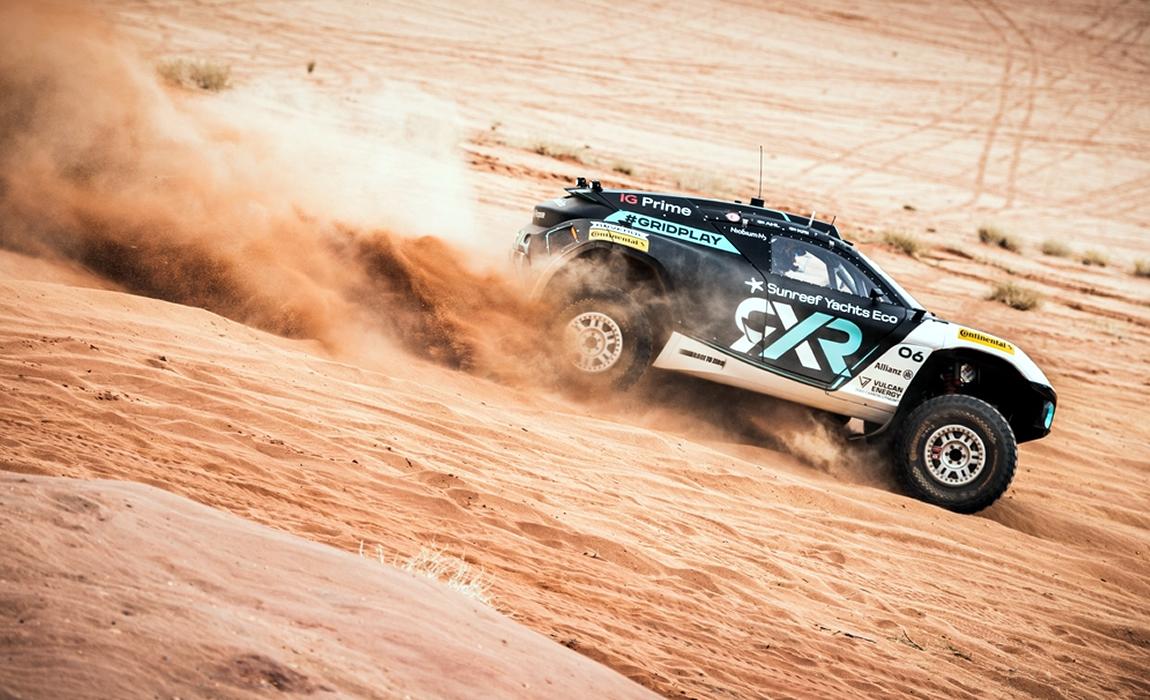 Out of the final corner, Kristoffersson carried more speed into the final descent towards the finish and overtook Munnings.

However, a penalty acquired by Åhlin-Kottulinsky for speeding in the switch zone saw the team relegated to last place in the heat.

XITE Energy Racing’s Oliver Bennett and stand-in driver Tamara Molinaro were able to capitalise and take second place in the heat and fourth place in the overall qualifying standings, ahead of RXR.