On the 15th April 2018 Falcon Motor Club held its annual spring car trial at Aston Farm, Ivinghoe, a venue set out in the shadow of Ivinghoe beacon in the beautiful Buckinghamshire countryside. Made up of grassy hills, the venue offers up its own little amphitheatre which lends itself perfectly for off-road car trials of this kind.

The event formed part of the following trials championships: MSA South East, ASEMC, AMSC and the BTRDA and once again this was well supported with a full entry being announced in the run-up to the event. With good numbers from both the local car club, Falcon MC and others from further afield such as N.Wales, Maidstone, Sevenoaks, Eastbourne and Stroud; including a bumper group from West Suffolk, the day promised to be a good day trialling. The National B section of the event attracted 24 across 4 classes, class 1 being the largest with 10. On the Clubman’s front, there were 26 competitors across 4 classes, Class 4 was the largest with 14 entrance. 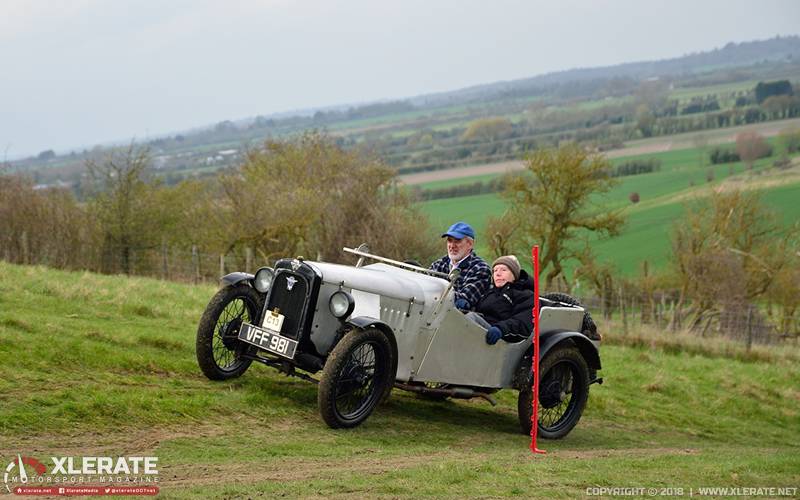 On the day the weather was fare to begin with; with a little bit of dampness to the hills that had been laid out, some of the more trickier sections did start to get a big muddy early on over the first couple of runs.

Round 1 early leader for the different classes were as follows: Nat B – Class 1 Shawn Franklin in the Citroen Saxo lead Barrie Parker in the Fiat 600 by just a single point. Class 2 Neil Mackay in the Citroen AX GT started off with a good lead over Derek Hunnisett in the Ford KA. Class 3 was a lot closer with Mark Hoppe in the Dutton Melos leading both Steve Courts & Dave Oliver in the Hillman Imp by a single point.

The Clubman’s Class 2 was being led off the blocks by Robin Howard in a Citroen Saxo, the all Imp Class 3 was being led by Cliff Morrell and Barry Redmayne was out in front of Class 4 in the Liege just a single point ahead of Peter Hanman in the Dellow Mk1. 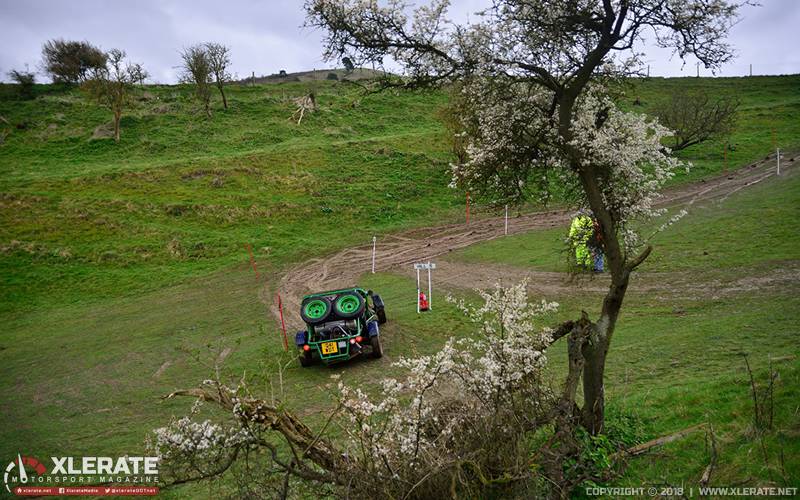 At the midday break, Shawn Franklin was maintaining his lead in the Nat B Class 1 fight, while his closest rival Barrie Parker had slipped back a few points. In Class 2 Neil Mackay remained strong despite second place Derek Hunnisett improving ever so slightly in Round 2. Steve Courts pulled out a perfect round of hills in Class 3, while rival Mark Hoppe dropped just a single point in this close-fought battle, they were neck and neck and both on 3 at the midpoint in the day.

Looking at the Clubman’s Class 2, all looked to be struggling a bit on the same hills, but Robin Howard was just about pippin Andy Mount who was also in a Saxo. Class 3’s Imp battle was livening up as Cliff Morrell and Adrian Gobson matched each other’s scores in Round 2, just two points separated them. Barry Redmayne was the only competitor to remain in single figures in Class 4 as he extended his lead into the lunch break; while brothers Peter & Tim Hanman were tied on 13 in second. 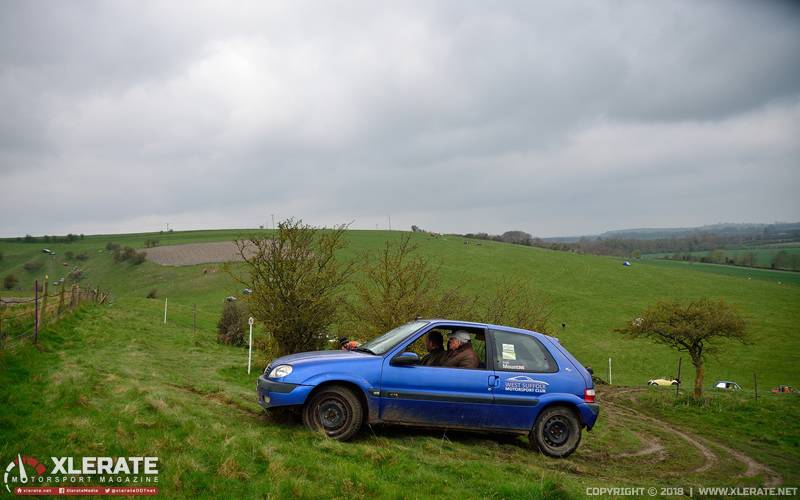 Back after the break for the next round of hills (Round 3) and everyone in the Nat B Class 1 started off with a 0 score on the first hill, except for Nick Pollitt in the Swift, who scored 9, not sure if he was just caught napping after lunch? Franklin and Parker were the only two really in with a shot with winning this class at this point with only one round remaining. Neil Mackay was running away with the Class 2 lead and there was no way anyone was ever going to catch him as he continued to build up on his lead from the morning. Class 3 was looking like a three-way fight between the Imp drivers of Courts (on 10) & Oliver (On 11) and the Dutton driver, Hoppe (On 12).

The Clubman’s Class 1 lead had been extended by Howard over second-place Ben Cutting in his Micra and the Imp Class 3 was looking like Cliff Morrell was going to take the win. In Class 4 although Redmayne was still leading by just two points, Tim Hanman had just taken second over Brother Peter on hill 6 of this round. 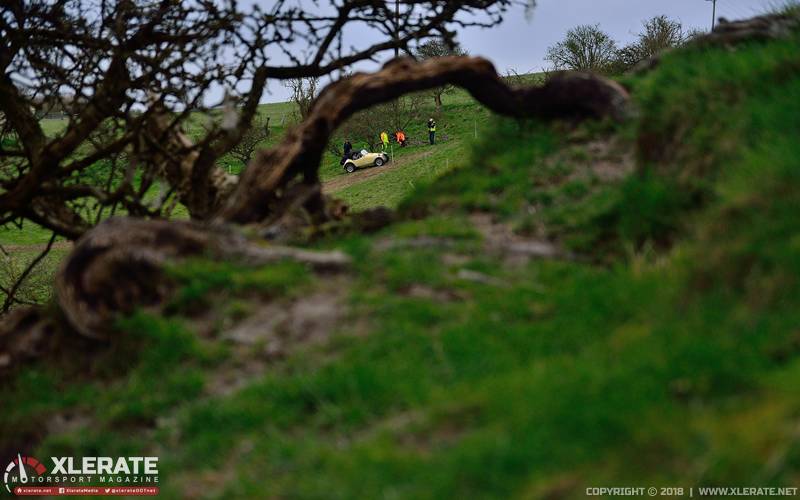 As the competitors went into the final round of hills for the day there was a few spots of the wet stuff which added to the challenge of the hills. On the very last hill, a lot looked to struggle with the conditions, it was proving to be very slippery even on foot for the marshals. This resulted in a lot of high scoring hills for the final run of the day, with only a handful mastering the conditions and the final scorecards reading a mass of 11’s; but amongst them, there were some 0 scores to be had. 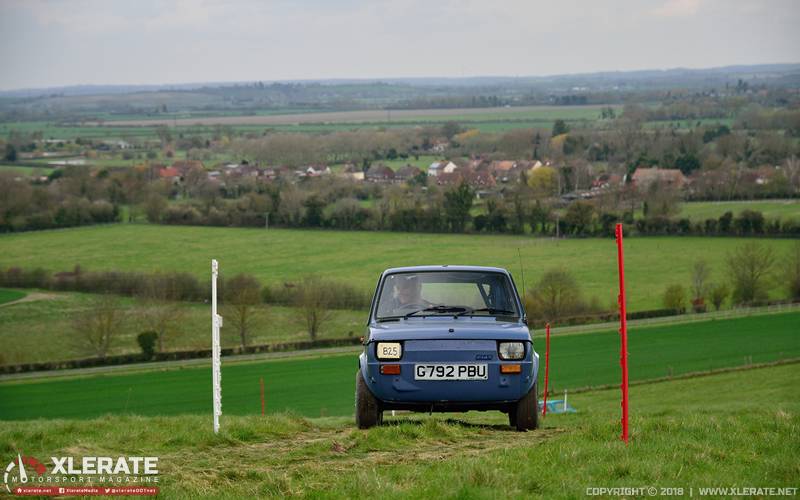 National B Class 1 win went to Barrie Parker (also the National B & overall winner) who overtook Shawn Franklin in the final round of the day, the last hill in the rain proved to be the one where Fanklin lost out mostly, where his 9 score was no match for Parker’s 0. Neil Mackay won with a considerable lead over second-place Derek Hunnisett in Class 2 and a last round surge from Dick Glossop in the Liage snatched the lead and win from Steve Courts.

Clubman’s Class 2 was Robin Howards day, who had a comfortable win over Ben Cutting in the Micra while Cliff Morrell won the all Imp Class 3. Class 4 was no real surprise that Barry Redmayne maintained his lead throughout the day to take the win over the Hanman boys who were in second and third, Redmayne also takes the overall Clubman win for the day.