The second day of Rally Sweden reconvened for another full day of action out on the snow and ice in sub-zero temperatures. The day featured 6 stages which began with a 10km technical sprint through Brattby.

Day 1 retiree Craig Breen opened up the proceedings from way down in 40th and played the role of the snowplough. He would be followed into the stages by a slightly cheesed off Ott Tänak (34th). The Estonian was forced to retire from the opening day’s action due to the failure of his Hybrid system and was politely showing his disappointment shall we say. However, the conditions were much better compared to the opening day of the rally, especially on the second passes; but the pair of “Super Rally-est” would need nothing short of a miracle to get back into the points scoring positions.

Effectively there were only 5 cars in the fight at the beginning of the day. Rally leader Thierry Neuville would have the three Toyota Yaris GR’s of Kalle Rovanperä, Elfyn Evans and Esapekka Lappi breathing down his neck right from the off; with the only other points-scoring Hyundai of Oliver Solberg a little further behind in 5th.

It was a great start to the day for Toyota, all four of their drivers getting the better of the Hyundai’s driven by Neuville and Tänak on that opening test. On perhaps a stage which suited the Yaris more, Evans had scored the fastest time but Rovanperä had taken back the lead of the rally from Neuville by just 0.7 seconds. 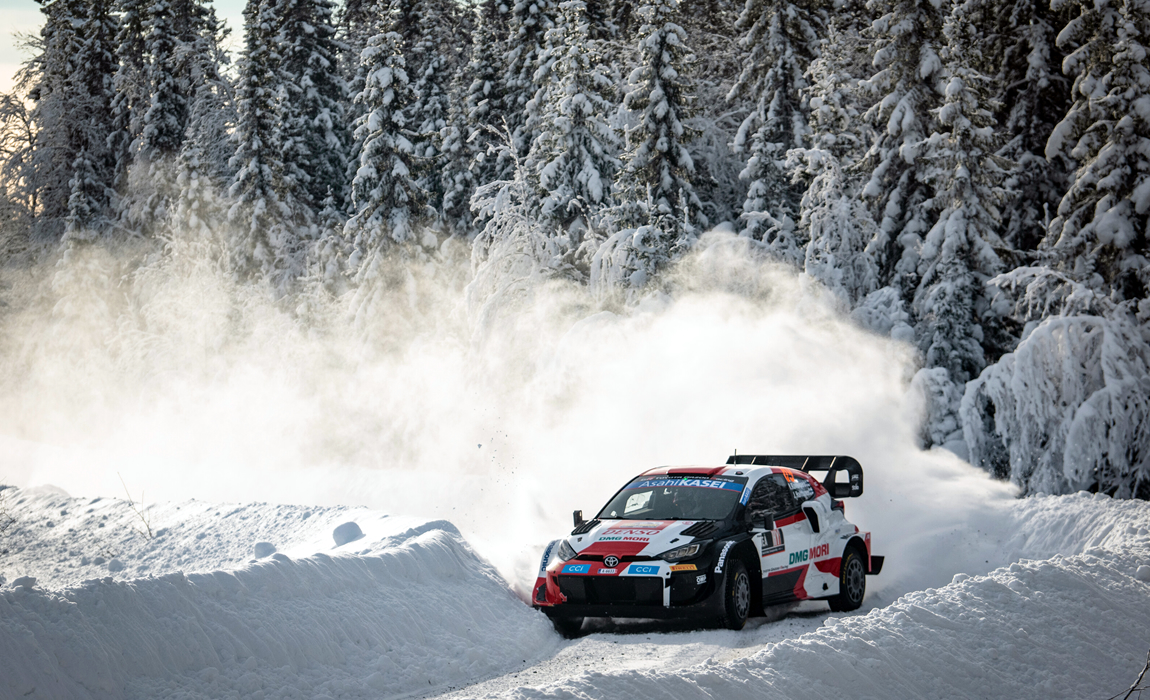 Just 1.4 seconds separated the top three cars and the day was shaping up well for a ding dong battle for the Swedish honours.

The crews were able to stretch their legs out a bit on the next Länged Stage; at nearly 20km in length, there was big commitment from the top drivers reaching speeds at times in access of the 190km/h mark.

Rovanperä just nipped Tänak for the win, but perhaps because he was the only driver that appeared not to lift off the accelerator in the final fast section of the stage. Despite the Hyundai i20’s appearing to have a slightly higher top speed compared to the Toyota Yaris, Neuville’s times was not there and he dropped yet another place down to third behind Evans. 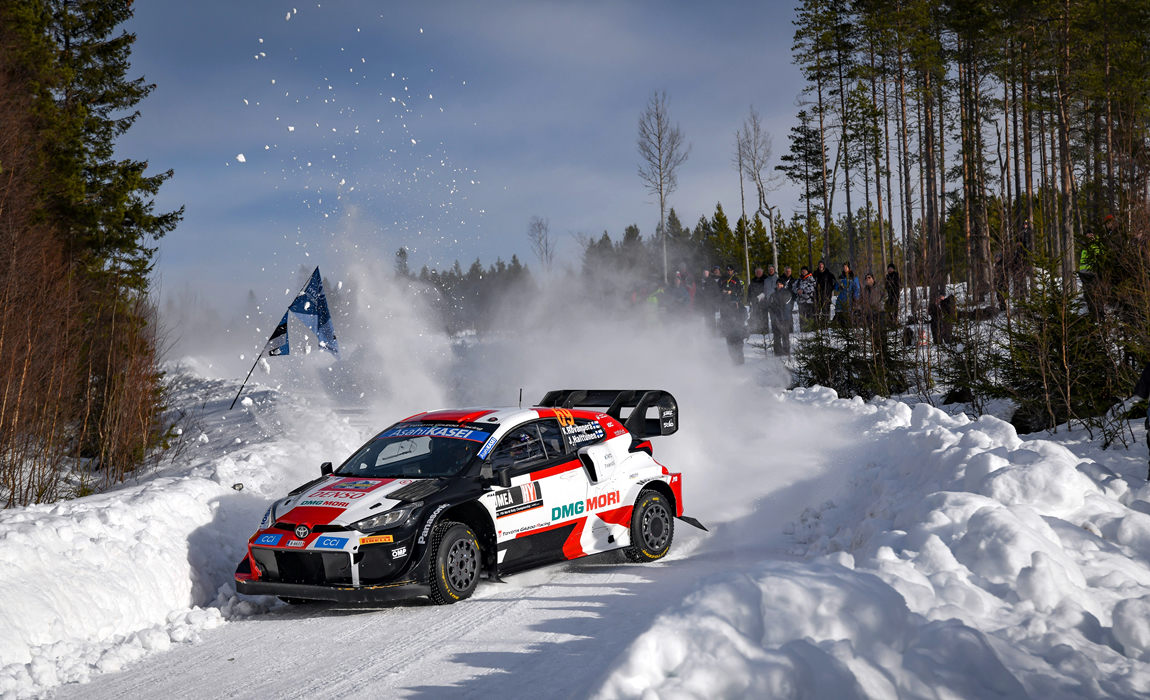 After the final Umeå stage of the morning loop where Rovanperä’s efforts had resulted in an extension to his lead to 4 seconds, the young Finn surprising found himself not only fighting for, but actually in contention for the rally victory.

Craig Breen picked up the final stage win of the morning, his maiden in the M-Sport Ford Puma and was just 0.2 seconds faster than the rally leader, Kalle Rovanperä who said that “It was quite an enjoyable loop”. He had extended his lead over teammate, Elfyn Evans heading into the mid-day service.

Hyundais Thierry Neuville was the big loser of the morning’s action, after beginning the day on top he had slipped down to 4th overall, losing the podium place to Esapekka Lapi.

A complicated morning for us, ok we were trying, but the Toyota were going quick, all three of them so it was very hard for us. We tried to improve a little bit the handling but nothing really which we could do to match the speed.

Veiby would be looking to mount a challenge against his Norwegian countryman and did just that in the very next stage, a stage win that was 5.5 seconds faster than Mikkelsen had put him back in front of Mikkelsen. However, just 0.8 sec separated the pair heading into the final stage of the morning loop in Umeå. 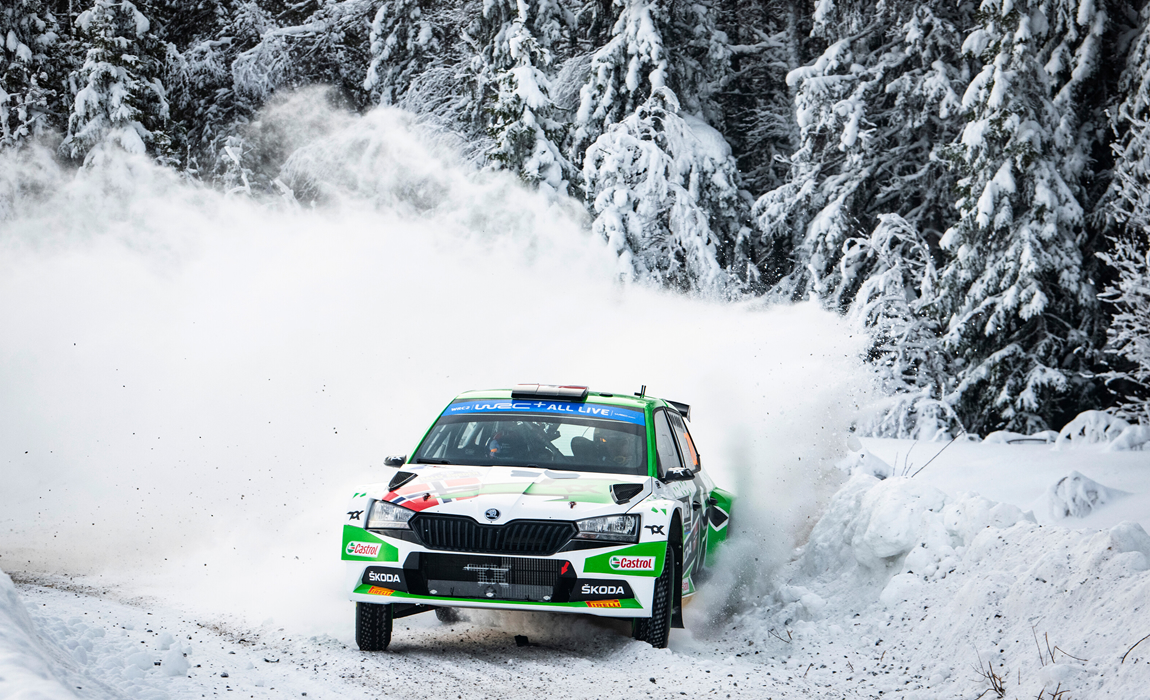 Mikkelsen reacted regaining back that time to end the morning loop back on top with a 4.8 seconds lead over Veiby as they headed into the midday service. Meanwhile, Nikolay Grazin in third was at times a little somewhat perplexed at the speed of the two Norwegians in front of him.

In the Juniors class, Britains Jon Armstrong needed to chase down Finlands Lauri Joona. The Fast Finn had gotten away from Amstrong a little bit throughout the Friday afternoon stages and had begun the second day with a 7.7sec advantage over the Brit. 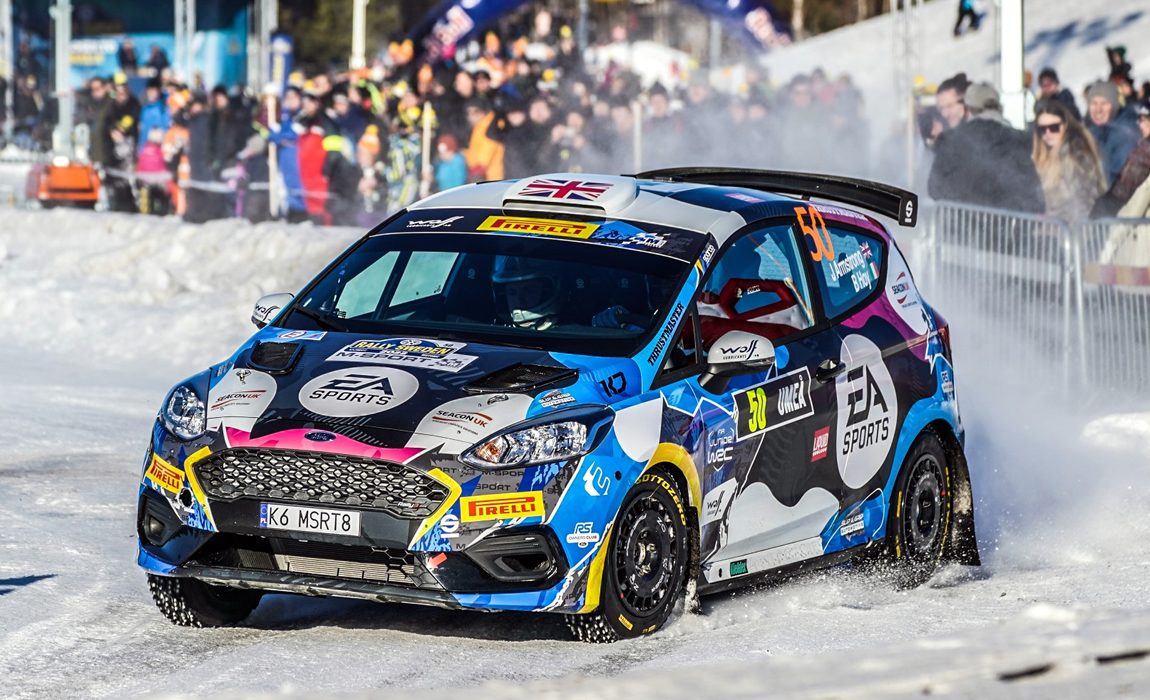 Armstrong kicked his day off with a strong stage time on the short 10km opening Brattby test. By getting the better of Joona by some 8-seconds he had finally gained the lead of the rally, but only just, by a tiny 0.3 seconds.

Joona came back at Armstrong in the Längad test, in fact, the best Armstrong could manage in this high-speed test was the fourth-fastest time. Sami Pajari had netted his second stage win of the morning but the battle for the win had been extended by Joona to 4.3 seconds ahead of the final stage of the morning loop in Umeå.

Pajari completed his morning’s efforts with a full house of stage wins while Armstrong struggled to match the pace of not only the leader Joona but the super rallying Pajari and Vives.

With deep tramline like ruts and high snow banks, it was a bit of a claustrophobic drive over the repeated run over the Brattby test. Irishman Craig Breen was first to experience the conditions that had been left behind after the Historics had had their fun and could be heard saying “Jesus Christ”  as he coasted over the finish line; whilst Estonia Ot Tanak thought that “it was harder work than in the Gym!”. 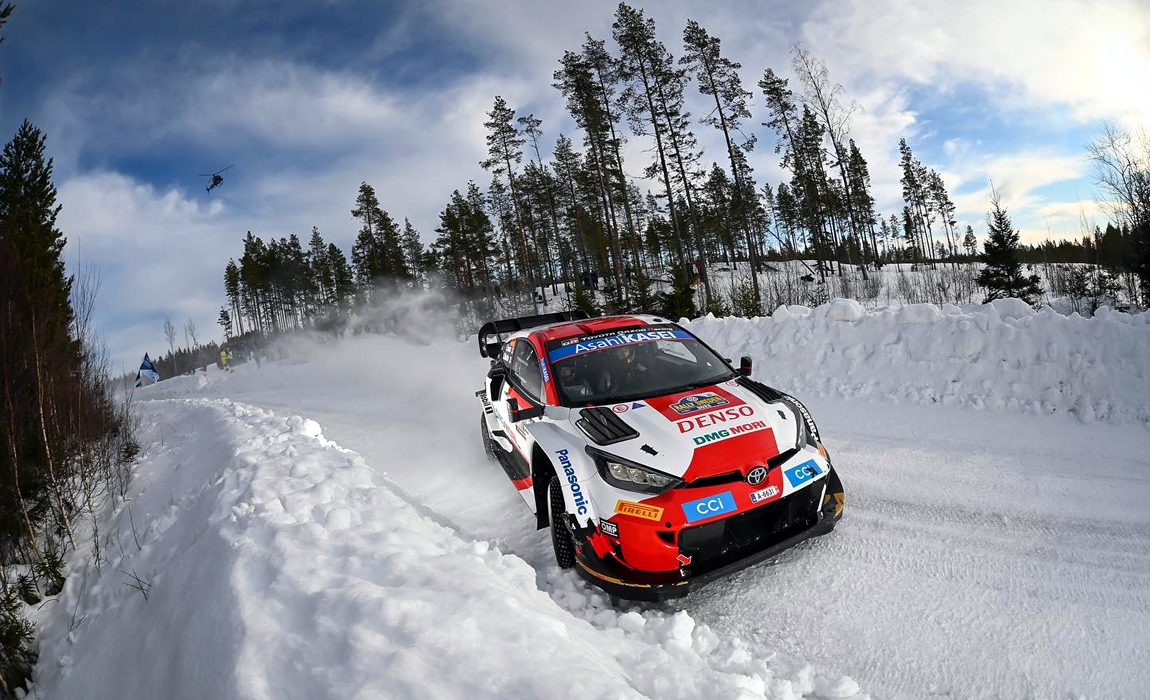 Welshman Elfyn Evans picked up another stage win, his third of the rally to close the gap down to his teammate Kalle Rovanperä but Hyundais Theirry Neuville was seemingly beginning to get back in the game. The crews then headed into the darkness for a second pass through Länged where Neuville passed Lappi to take third. Breen retired from the event for a second consecutive day following mechanical failure and Rovanperä picked up another stage win getting the better of Evans to extend his lead going into the final night stage of the day through Umeå. 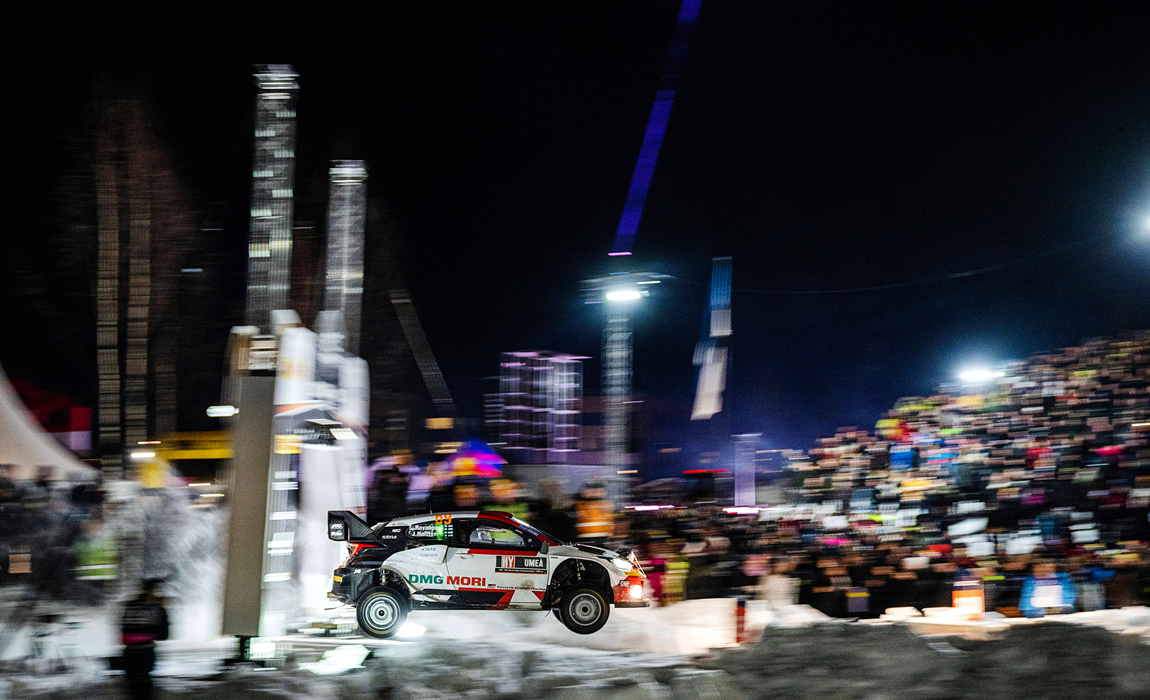 The final stage of the leg once again belonged to Rovanperä, ending the day for which he had delivered a strong performance in his Yaris GR. Young Finn had scored his 5th stage win and was heading into the final day of Sweden with an 8.3-second advantage to his teammate, Elfyn Evans who ended the day on that Umeå test in a spectacular fashion.

I think driving should always be at 100%. On the middle one it was maybe even 105 or 110, but yeah happy to be here without mistakes. Tomorrow is still a big fight!

Welshman Evans who had fought for the lead of the rally with his teammate over the course of the event this far got all out of sorts on the final bend and went off the stage, going up and over the snowbank as he crossed the finish line. He still recorded the second-fastest stage time ahead of the third-place man, Thierry Neuville.

The battle for the WRC2 class lead between the two Norwegians intensified as the afternoon progressed. Andreas Mikkelsen kept his foot in and extended his lead over Ole Christian Vieby. 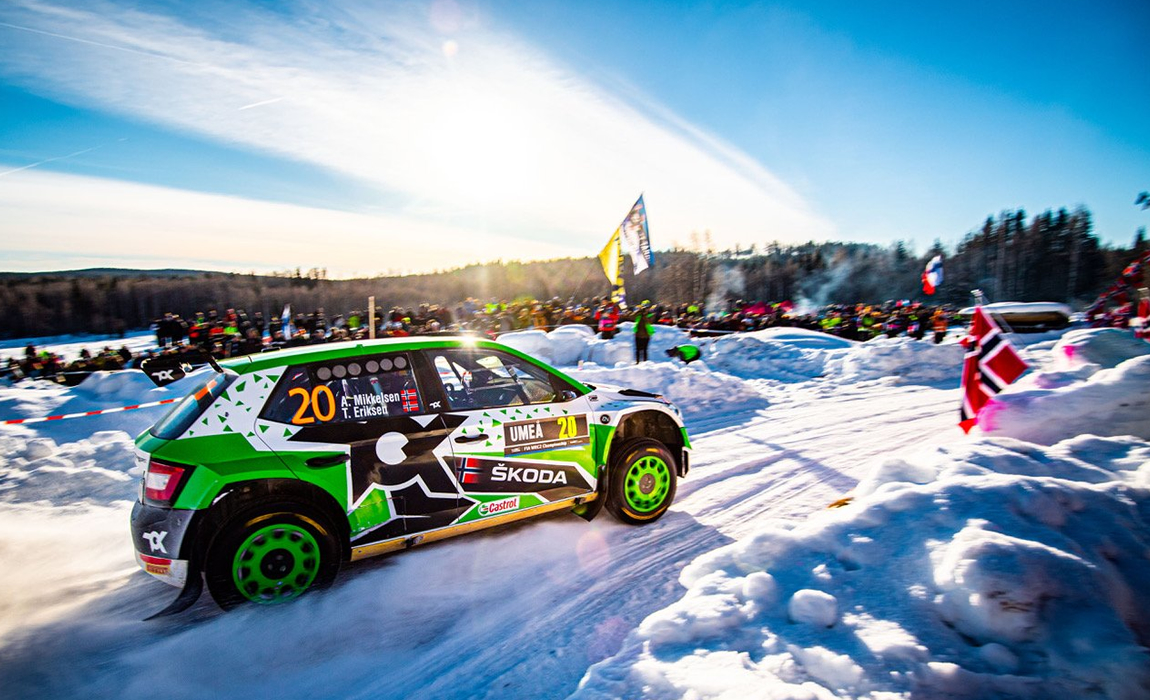 At times Mikkelsen said he could have pushed a little harder but as for is challenger, Vieby, he knew that he was in a big fight, but was happy with his performance.

We tried to stay away from mistakes and have a clean drive. We were a bit safe in the last stage”

Jon Amstrong went into the midday service with a 5.5 seconds deficit to Finlands Lauri Joona, but the Ulsterman was able to bring the fight throughout the afternoon loop of stages.

Whilst Sami Pajari was on a mission to rack up the stage wins, Armstrong continued to get the better of Joona on every stage in the loop. 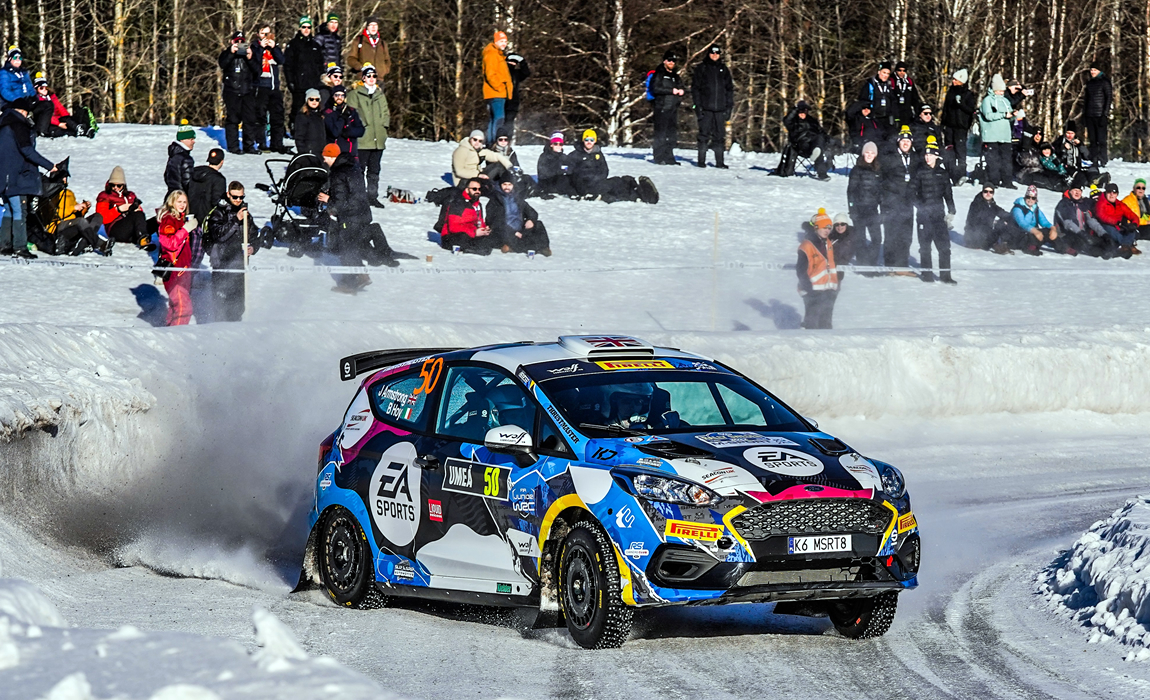 Armstrong’s persistence and efforts were rewarded in the final stage of the day over the Umeå test with an outright class stage win. This earned him the lead of the rally heading into the final day with a 3.5 second lead over Joona.

It’s a nice surprise to be leading Junior WRC after Day 2 of Rally Sweden. Things are working well between Brian, myself, and the Rally3 Fiesta so there is no reason why we can’t keep this up tomorrow.