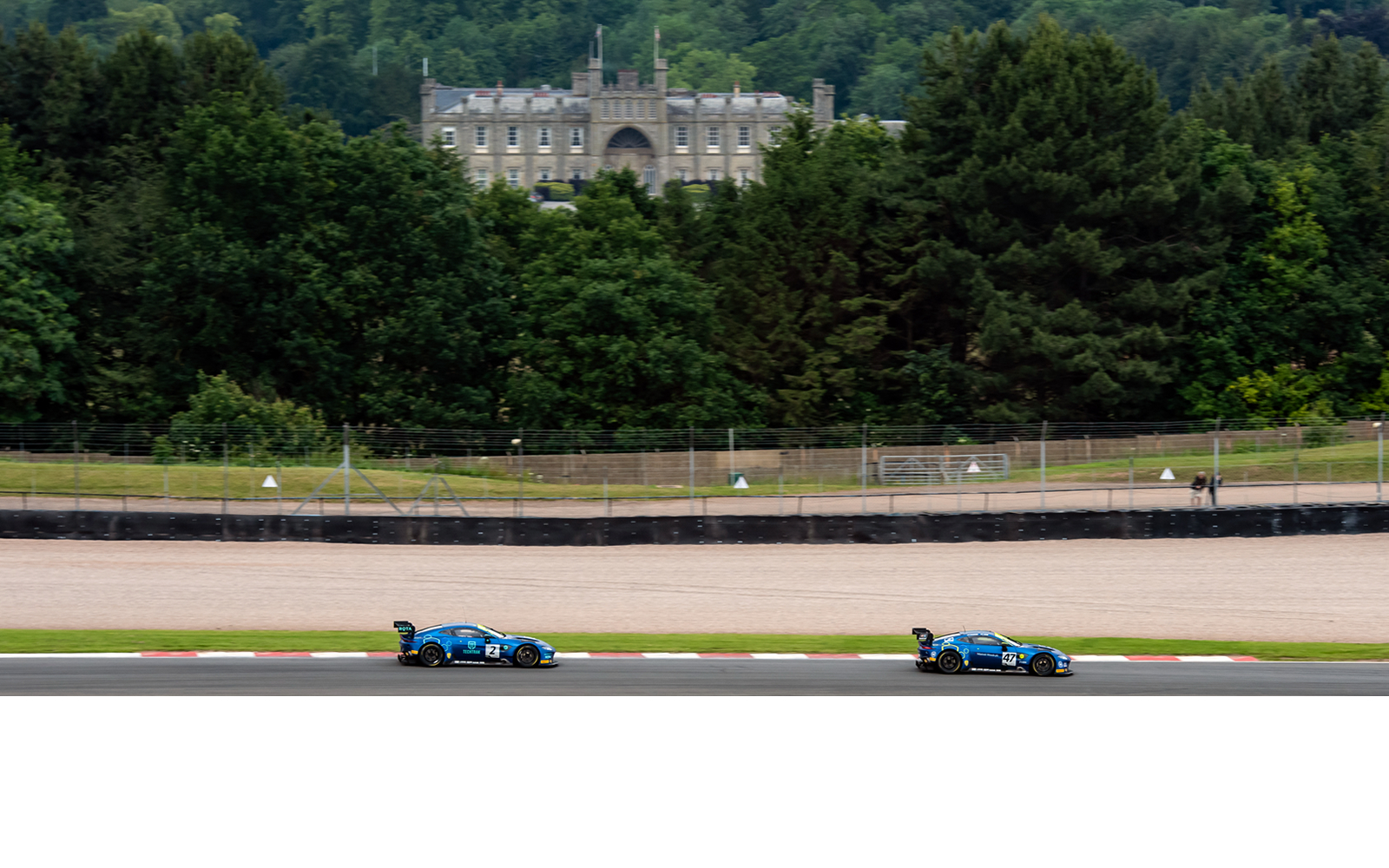 With no Rockingham on the calendar for British GT this season, Donington hosts the first of a doubleheader, with the track again being used again later in the season for the more traditional deciding round. The two-hour race is the second enduro race of the season and marks the halfway spot in the championship in which the Barwell Lamborghini’s sit in first and second spot in the overall championship, Phil Keen and Adam Balon above Sam de Haan and Jonny Cocker.

As in the qualifying for the previous round, both the Pro and Am drivers combined times would determine their grid position for Sunday’s race. In the AM session, it was Graham Davidson who set the fastest time in the qualifying session, ahead of Ollie Wilkinson in the Optimum Motorsports run Aston.

The GT3 Pro’s were next to take to the track for a ten-minute qualifying session. This was halted about halfway through for a red flag caused by Callum MacLeod taking a trip to the gravel, meaning the team wouldn’t emulate their front-row position they achieved at the previous round at Silverstone. The pole position was claimed by Jonny Adam, who was fastest of all the Pro drivers meaning the TF Sport Aston would start at the front for the second race in a row. An impressive qualifying from Dennis Lind in the WPI Lamborghini gave the team second position on the grid.

In the GT4 Am session, Angus Fender in the Century Motorsports BMW set the quickest time, ahead of the once again very quick looking Ford Mustang driven by Scott Maxwell. After the Pro session, it would be the Mustang which would claim pole position, Seb Priaulx setting a time that when combined with his teammate would allow them to lead the pack from the front in Sunday’s race. James Dorlin propelled the Tolman Motorsport McLaren ahead of the BMW and up into second place on the grid.

Much like in the previous round at Silverstone Davidson made a great start in his Aston to convert his pole position, leading into the first corner ahead of second-place man Igoe in the WPI Lamborghini, and Balfe in the McLaren. There were a few cars which had trouble pointing in the right direction in the early stages of the race, whether it be on their own or with help from others. Littman and Neary both spun one lap after the other, while Geddie also ended up spinning the Bentley, dropping all three cars to the back of the field in the early stages.  All while others were squabbling and having offs Davidson was increasing his lead lap by lap.

In the early exchanges in the GT4 category, the number 4 Mclaren of Tolman motorsports managed to get ahead of the Mustang driven by Priaulx and Maxwell, which then dropped back into third place behind the HHC McLaren piloted by Callum Pointon.  Not too long after, these positions were reversed and Maxwell moved the Mustang back up into second at the expense of Pointon.

A determined drive by Michael Igoe saw him try and defend his second position for a number of laps, eventually, the defence was broken and he was passed by both Balfe in the McLaren and Ollie Wilkinson in the Aston. Once Balfe was clear of the Lamborghini he set about trying to clear the gap that Davidson had pulled out in the early stages of the race.

Meanwhile, the winners of the previous round at Silverstone were having a torrid race, having to serve a ten-second stop and go penalty for an on-track incident the Ram Racing Mercedes driven by Loggie then had to make a second pitstop due to a puncture. Add this to the success time penalty they would have to serve, it was highly unlikely they would be able to repeat the win in the last race.

There was soon to be drama in the GT4 race as the leader would end up in the pits and eventual retirement after being hit by one of the GT3 cars which were trying to lap them. Further drama would befall another of the GT4 cars, Nick Jones had to pit with their Mercedes beginning to smoke. A great shame after such bad luck already this season in a car which looked rapid in the second qualifying session. With the Tolman McLaren retiring, Maxwell inherited the lead of the race.

The two GT3 leaders pitted on the same lap and handed over to the Pros for the remaining hour of the race, neither of them had any success time added to their pitstops so the race was between the crews as to how quickly they could get the cars back on track. Adam came out on top, maintaining the lead that Davidson had given him in the first stint of the race. Another fire in the pits saw the retirement of the third-place Aston Martin driven by Ollie Wilkinson. The success penalty for the WPI Lamborghini meant that the team would relinquish their third position to the Barwell Lamborghini of Jonny Cocker.

The success penalty handed to the Multimatic Ford Mustang meant that it would hand the lead of the race to the BMW driven by Mark Kimber, although it was only two seconds ahead after the stops and Priaulx has already proved to be quick in this series, it made for a great battle for the lead of the GT4 class. Eventually, Priaulx made the move on the inside at the Melbourne hairpin and sprinted away from the BMW.

The lead of the GT3 class was well managed by Adam, keeping the second-place McLaren behind him. This was helped by his teammate Nikki Thiim who despite being a lap down managed to provide a buffer between Adam and Balfe in second place. Eventually, Adam made a small mistake allowing Thiim to go ahead of him and unlap himself, this also allowed Balfe to catch right up in second. Despite this mistake, Adam then slowly eked out a gap and drove home a lights to flag victory in the Aston, a welcome victory after a DNF in the previous round at Silverstone in which the TF Sport team were leading with only minutes to go before being taken out whilst lapping a GT4 car.

The GT4 category was sewn up by Priaulx after a hard-fought battle with the BMW driven by Kimber. The BMW, unfortunately, came to grief at McLeans and ended up in the barriers in the final few laps, meaning the HHC McLaren would take second place ahead of Lewis Proctor and Jordan Collard in the Tolman run McLaren in third. In the championship standings the Multimatic Mustang driven by Priaulx and Maxwell jump above Callum Pointon and Dean MacDonald in the HHC Motorsport McLaren. Both ahead of Jordan Collard and Lewis Proctor in third in their Tolman Motorsport run McLaren.

Despite the race win for Davidson and Adam, it is still the two Barwell run Lamborghini’s sitting at the top of the standings. Balon and Keen in first with 104 points after finishing fifth, ahead of Cocker and De Haan on 95.5 points after they picked up the third podium place at Donington. The result has however moved Davidson and Adam up into third in the championship, and with the next round being at Spa, Davidson will be hoping to emulate the victory he had last year in the Jetstream Motorsport Aston and move the TF Aston further up in the championship mix.