Just one week on from Croft the teams had a quick turnaround as the series headed to Silverstone. Ash Sutton came into the round with a comfortable lead in the championship after a good point scoring weekend at Croft, Jake Hill propelled himself into contention and sits in second place in the championship. 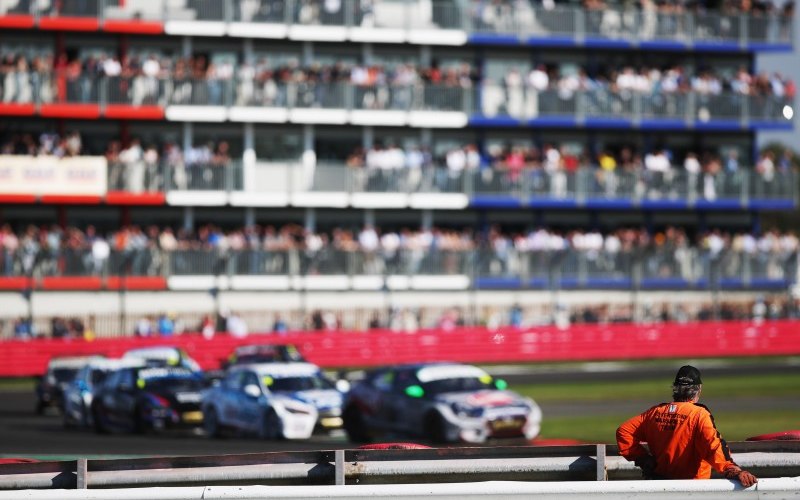 Qualifying saw Rory Butcher put his Speedworks Toyota on pole and championship hopeful Tom Ingram in second, with Aiden Moffatt and Josh Cook just behind. Poor luck once again struck Rory Butcher as fluid had been left on the track from a previous race in his pole position spot. Despite moving the cars one row back, his wheels still spun as he went over the patch allowing Ingram to take the lead going into the first corner.

Dan Lloyd had a great opening lap as the top two pulled away and got his Astra into third position from the third row of the grid. Butcher looked determined to claim victory and on the third lap, he went up the inside of Ingram as they went into Brooklands. Ingram didn’t put up too much of a fight, likely realising the success ballast he was carrying was going to hamper him too much. 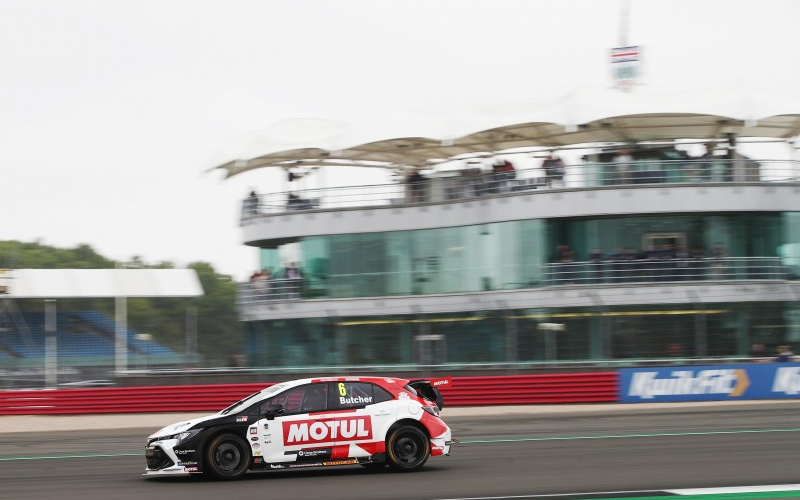 Despite carrying maximum ballast, Ash Sutton managed to put in the fastest lap of the race even with 75kg on board. He was in eighth place but was once again extending his championship lead as Jake Hill could only qualify in 23rd spot. He made the most of his speed and got past Rowbottom to move himself up to seventh. 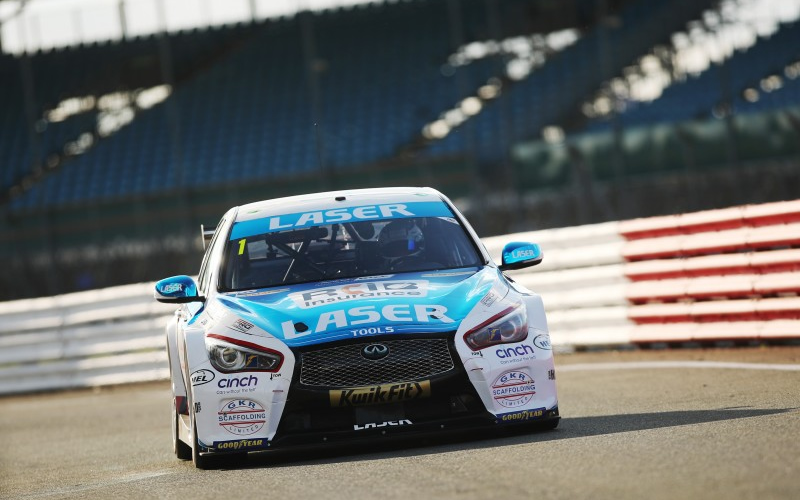 As Butcher pulled away in the lead, a battle started to gain momentum for second. Ingram, Lloyd and Moffatt bunched up as they all looked to gain an advantage. Despite one or two looks, none of the drivers could make a clear-cut move, so their positions stayed the same. Butcher comfortably held on to win the race. Championship leader Sutton finished in seventh, with his closest rival Hill ending up in 21st. 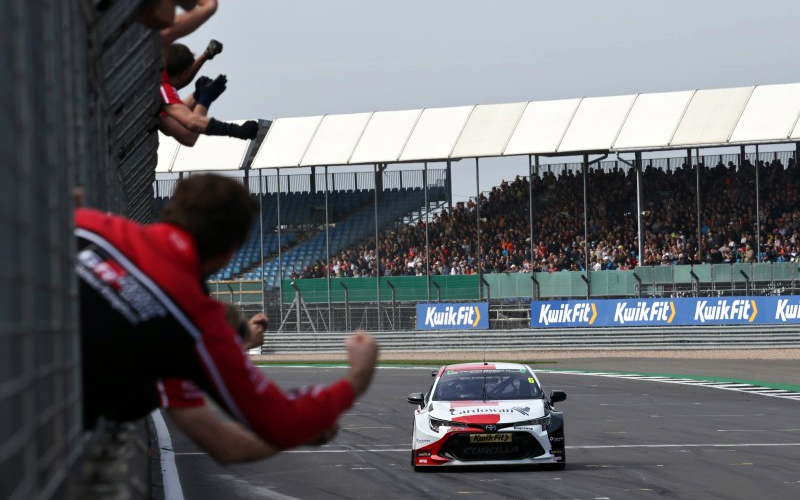 In the second race of the day, Butcher led the field away from pole position with Tom Ingram in close proximity. Lloyd would see himself drop down the order after getting a poor start. Josh Cook managed to make his way up into third spot by the end of the first lap. 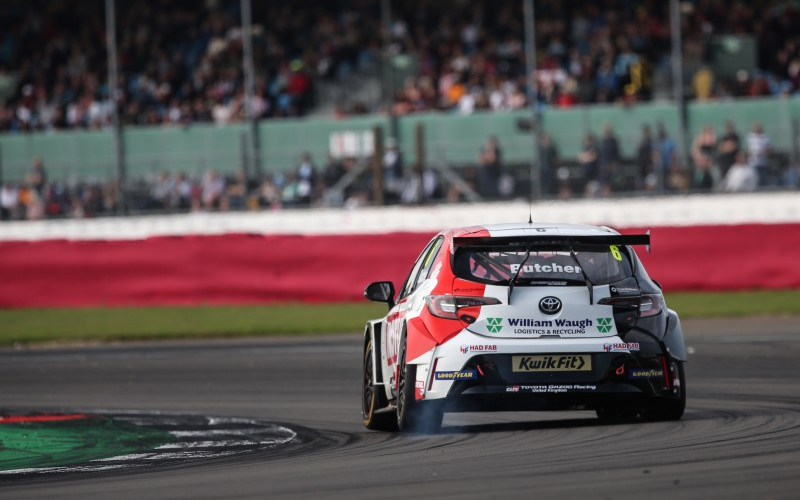 The safety car was called into action on the third lap as Nicholas Hamilton found himself beached in the gravel after being spun around. It didn’t take long to get the car clear and they were back underway just a lap later.

Josh Cook briefly moved up into second spot as he got himself ahead of Ingram as they went into Brooklands but the Exceler8 driver fought back and claimed the inside line as they went through Copse, regaining the position. In the squabble, Moffatt tried to take advantage and drew alongside of Cook, but the BTC driver managed to hold onto his position.

The safety car was once again called into action as Jade Edwards was unceremoniously bumped off the track by Gordon Shedden. Butcher made another good restart and gave himself a bit of a gap ahead of Ingram, who had to be aware of Cook behind. Cook managed to take advantage of his lighter car and got ahead of Ingram after being side by side for a number of corners.

As Ingram was fighting for his third-place the cars behind started to bunch up and Turkington managed to make a move around the outside of Moffatt as they went around Brooklands, claiming the inside line for the next corner at Luffield. 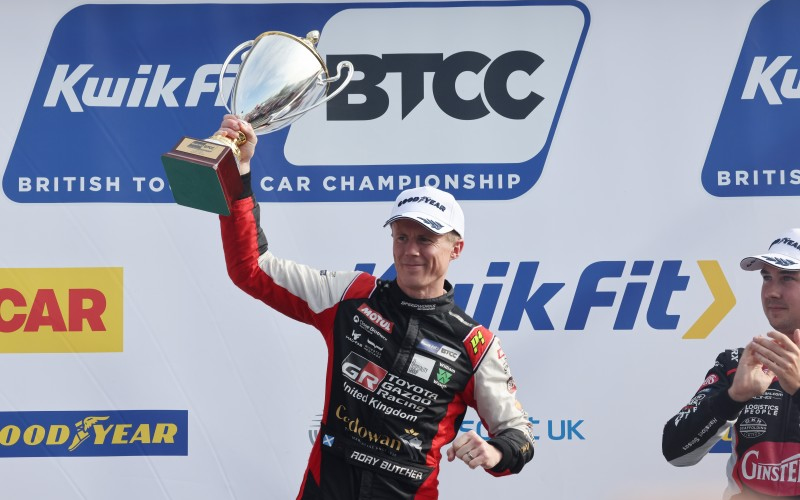 Butcher held on despite a late lunge from Cook to take his second win of the day. Although Cook finished second on track, he was later disqualified due to a ride height infringement. This meant Ingram took second and Turkington claimed the last podium spot as Sutton pipped his teammate on the line for fourth.

Lloyd claimed pole position courtesy of the reverse grid draw in the final race alongside his teammate Plato. After a difficult start to the weekend, Hill found himself in third with Jelley in fourth. 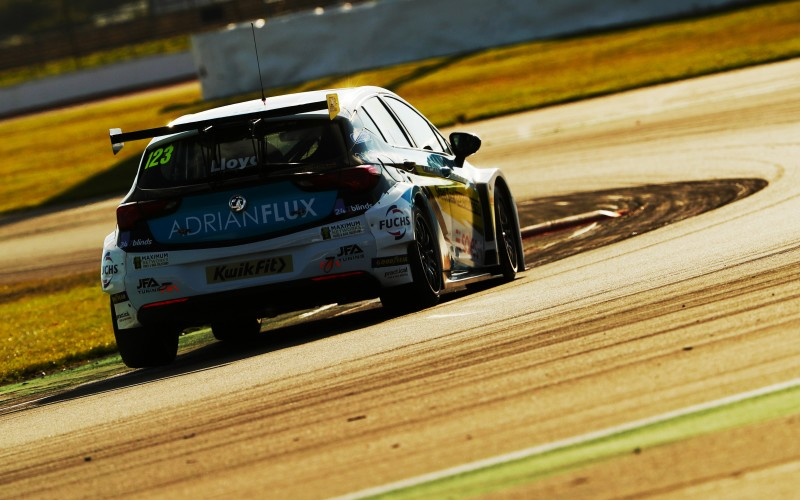 There was drama further down the pack on the fourth lap. Max Chilton swerved to avoid a slower car as they exited Copse and caught the front of Sam Osbourne, sending him spinning across the track and onto the grass, luckily, he wasn’t collected by anyone.

After setting the fastest lap Hill was soon on the back of Lloyd looking for a way past to take the lead. Hill patiently waited for an opportunity and made the most of an opening on the 11th lap. He got the inside line as the cars went through Luffield and held onto the lead as the cars entered Copse. 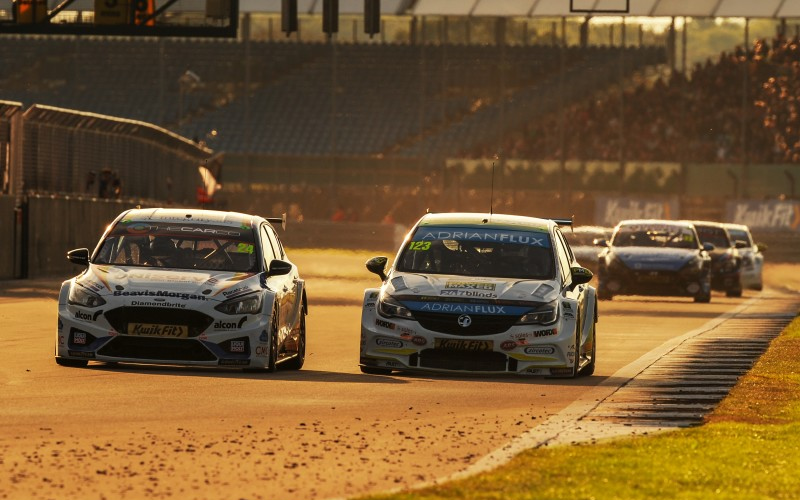 There was a three-way battle for the final podium position as Smiley, Jelley and Sutton were all nose to tail. Sutton managed to get himself ahead of Jelley on the 12th lap, the extra points helping him consolidate his championship lead. Just a few laps later Sutton got third spot from Smiley. Despite being pushed onto the grass he held the inside line as the cars entered Becketts and bravely took the position.

Hill managed to hold on to take the victory to give himself a chance in the title race, Lloyd finished in second in his best performance of the season. Sutton managed to take the final podium position. 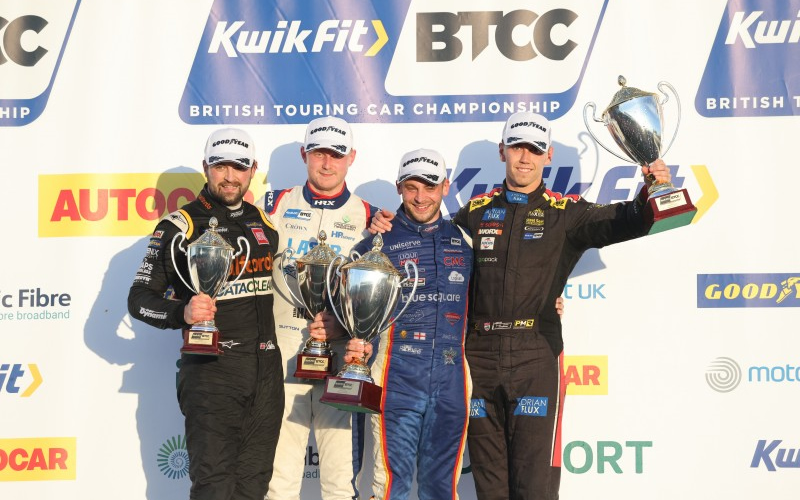 The BTCC returns for the penultimate round at Donington Park in two weeks time. Sutton looks comfortable in the lead of the championship, 36 points ahead of Ingram in second. Hill is still in with an outside chance in third place, but unless disaster strikes, it is hard to see Sutton not retaining his title.