The BTCC descended upon the indy circuit at Brands Hatch for the third meeting of the season and rounds 7, 8 and 9 of the championship.

The weather on race day was in stark contrast to the heatwave the drivers experienced at Snetterton, and were met with changeable conditions and a mostly overcast day. 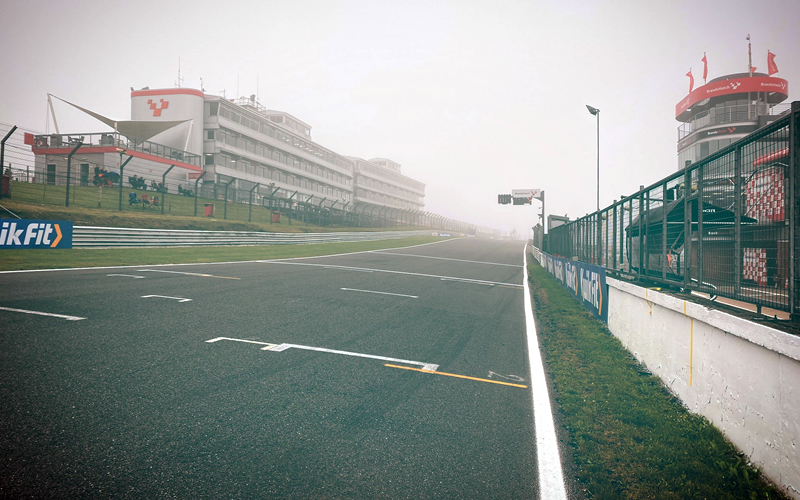 The qualifying session saw a front row lockout for the Halfords Racing with Cataclean Honda Civics, Daniel Rowbottom securing his first pole position with his teammate and three-time title winner Gordon Shedden alongside him.

The pole spot at Brands is notorious for often not being the best spot on the grid and this was proved by Rowbottom. He seemed to get bogged down and was quickly overtaken by three or four drivers before even getting to the first corner. 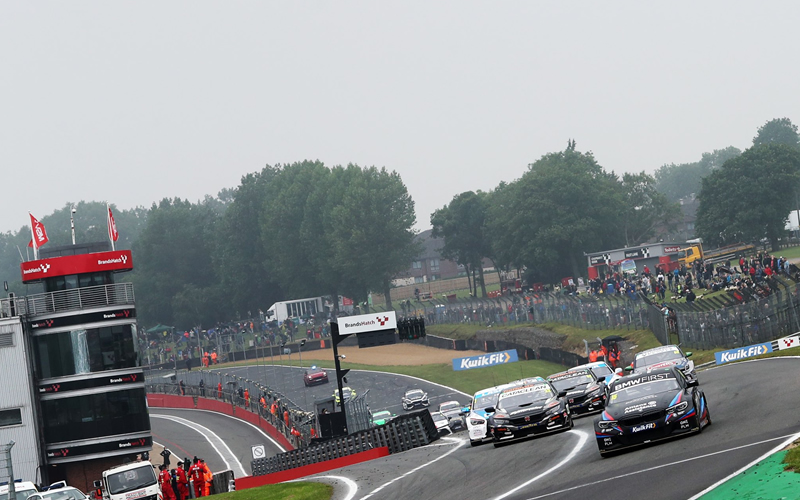 It was the rear-wheel drive of Tom Oliphant in the BMW which saw him get past the three front-wheel drive cars ahead of him and into first place by the first corner.

A great start by Aiden Moffatt saw him put his Infiniti up into second, getting ahead of fellow Scot Shedden by the time the cars exited Druids. Ingram took this opportunity to dive up the inside of Shedden going into Graham Hill Bend but lost out a couple of corners later as the former champion gave the Hyundai a tap in the bumper sending Ingram sideways and down a couple of spots. 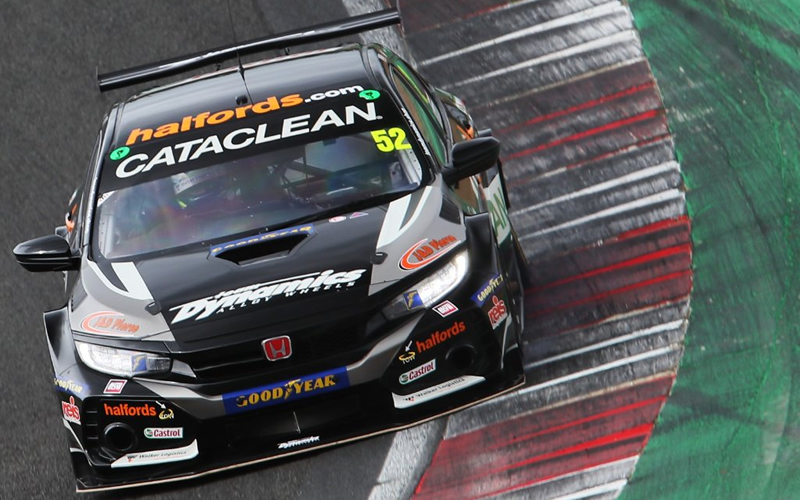 Oliphant soon started to create a gap as the Scots behind battled it out for second spot. Ash Sutton tried to make the most of the two fellow countrymen’s battle by opportunistically getting ahead of them both around the outside of Druids, but Shedden made the most of the distraction Sutton caused and got the Honda past Moffatt into second.

Rowbottom started to look to make up for his poor start and on the eighth lap took advantage of his lighter car and managed to get himself ahead of Jake Hill and into fourth. A couple of laps later he made a clean move up the inside of Druids and into a podium spot.

Despite a late charge from Shedden, Oliphant had created enough of a gap at the start of the race to hold onto his first win of the season. Shedden and Rowbottom completed the podium. 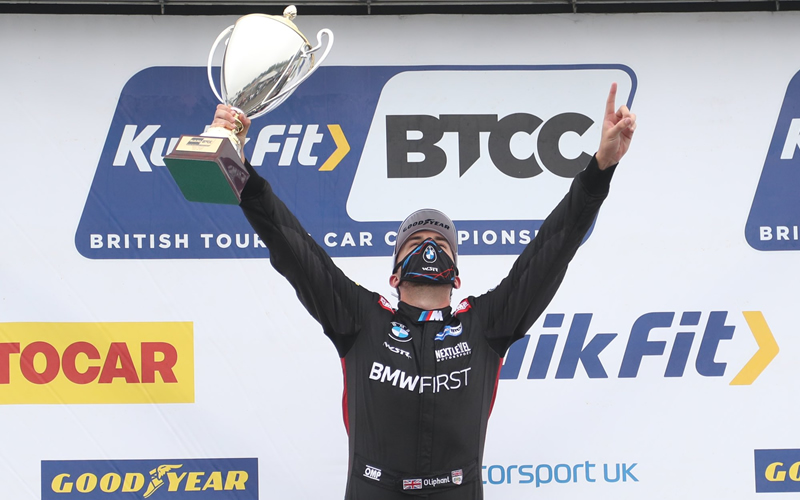 In the second race of the day, Oliphant again made a great start and kept onto his lead going into Paddock Hill bend. Rowbottom learnt from his earlier poor start and managed to get himself ahead of his teammate and into second. Shedden got tapped into a slide by Hill and managed to gather it up before the Honda span in front of the rest of the pack. 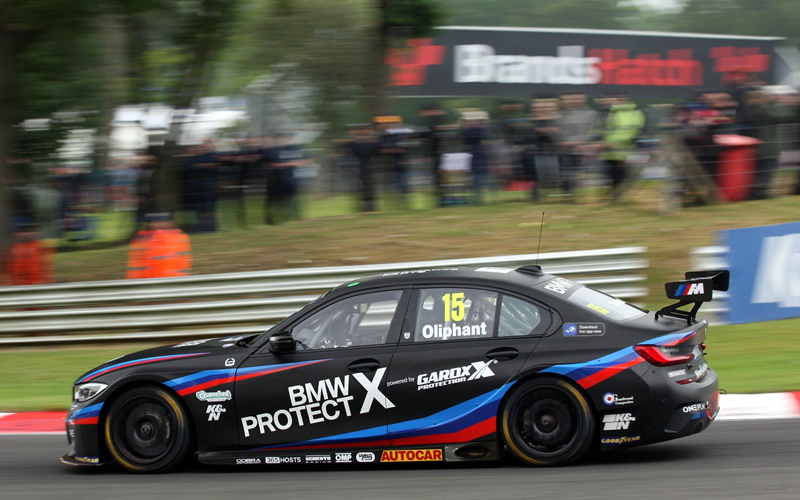 Shedden got into more trouble at Paddock on the second lap, Stephen Jelley tried to get up the inside of the Honda but Shedden closed the gap suddenly. Both cars speared off into the gravel, Shedden managing to get out but Jelley had to retire. The safety car was called upon to rescue the BMW, which meant the two-second gap Oliphant had created was cut to nothing. 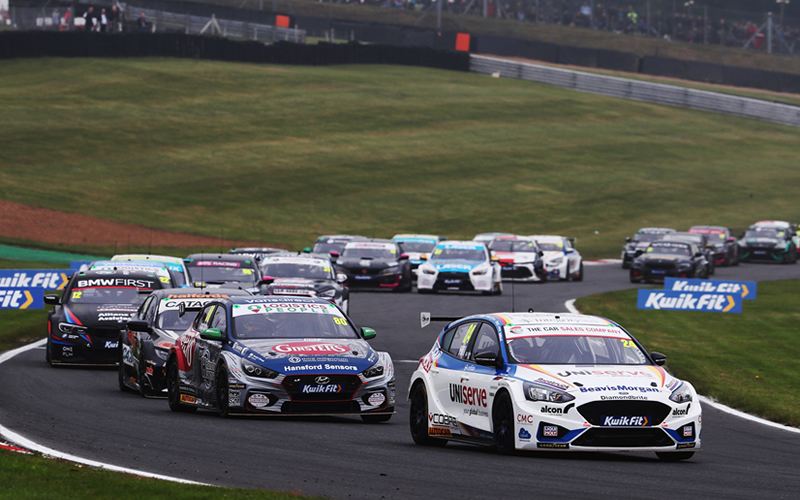 Jake Hill looked to improve on his fourth-place spot in the first race and made a move on Tom Ingram and muscled his way past and into third. He was pushing to get into the second spot but his poor fortune that haunted him at Snetterton came back once again. On the 16th lap, his Focus got a front left puncture causing him to go straight on at Clearways, having to then head into the pits to get it changed. 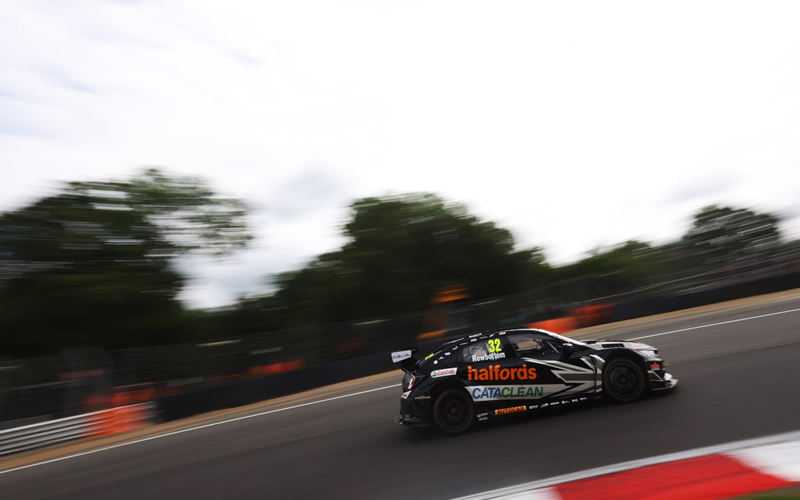 Meanwhile, Rowbottom was making a concerted effort to get the lead from Oliphant. He looked to have got the Honda around the outside of the BMW and get the inside line for Graham Hill bend but Oliphant was steadfast in his defence. The slow exit for Rowbottom saw Ingram pounce and get himself up into second. 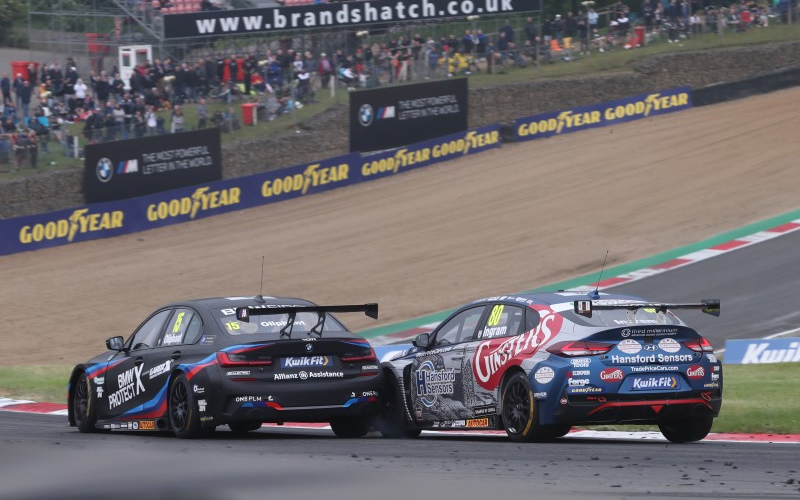 Despite a solid defensive drive in a heavier car, Oliphant’s resistance was finally broken on the final lap. Ingram made a late move going into Paddock and caught the back end of the BMW. The slide was enough for Ingram to get himself up into the lead and onto victory. After passing Rowbottom for third, Sutton also managed to squeeze himself past Oliphant on the line to gain the second spot.

The number 12 was drawn for the reverse grid which meant Adam Morgan sat on pole with Jack Goff beside him. Morgan made a good start and got away from Goff who was immediately under attack from Moffatt. Morgan soon created a gap between him and those behind and comfortably went on to win the race. 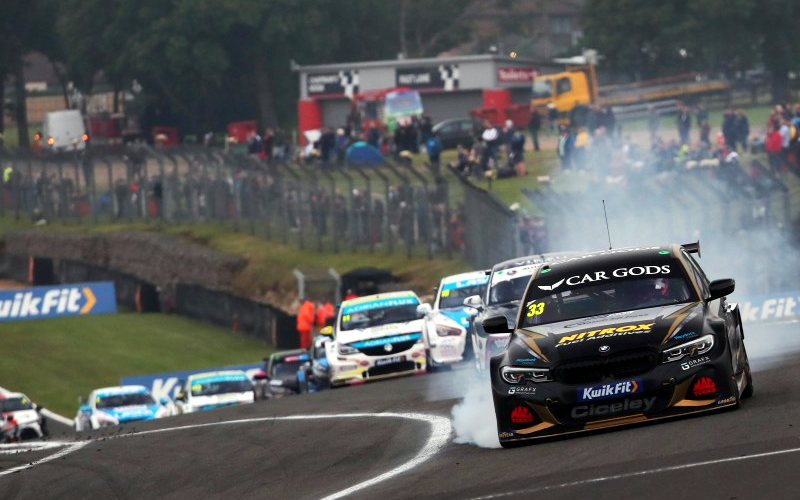 Goff lost his second place by going into Paddock a bit deep allowing Moffatt to easily get past the Cupra. Goff followed patiently behind and on the 11th lap made a move on Moffatt going into the final corner. He took advantage of a gap that Moffatt had left and rubbed past into the second spot. The final race of the day was a fairly timid affair with most of the top positions staying as they were. Plato made a late lunge on the final lap to try and steal the final podium spot from Moffatt, but the Scotsman managed to hold on by a fraction. 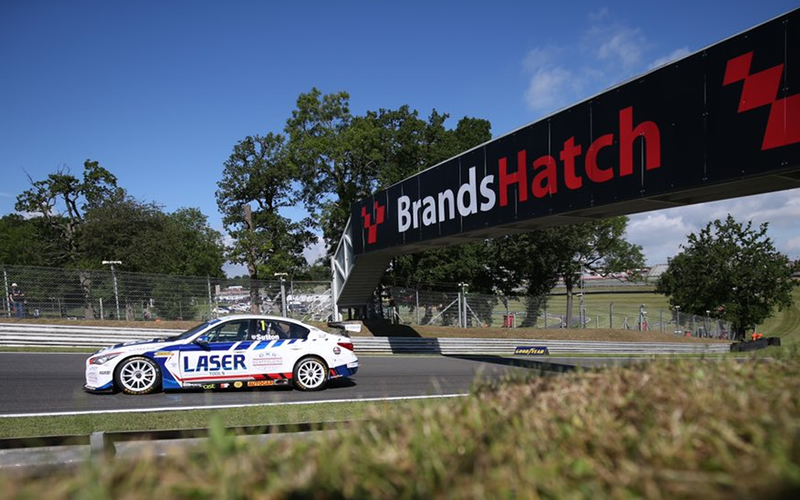 A consistent weekend from Ash Sutton means he leaves Brands still sitting at the top of the championship, despite having a heavy success ballast across the weekend. Ingram remains in pursuit just three points behind. A poor weekend from Colin Turkington means he drops down into fourth behind Josh Cook, who is 23 points behind Ingram in second.