The Motorsport UK British Rally Championship returned with the Corbeau Seats Rally Tendring & Clacton to carry the honours of opening up the new look 2022 season. After becoming the first closed road stage rally in England back in 2018, the Clacton based event which is organised by the very capable Chelmsford Motor Club would kick start “The Battle of Britain” in the race for new BRC & JBRC Champions. 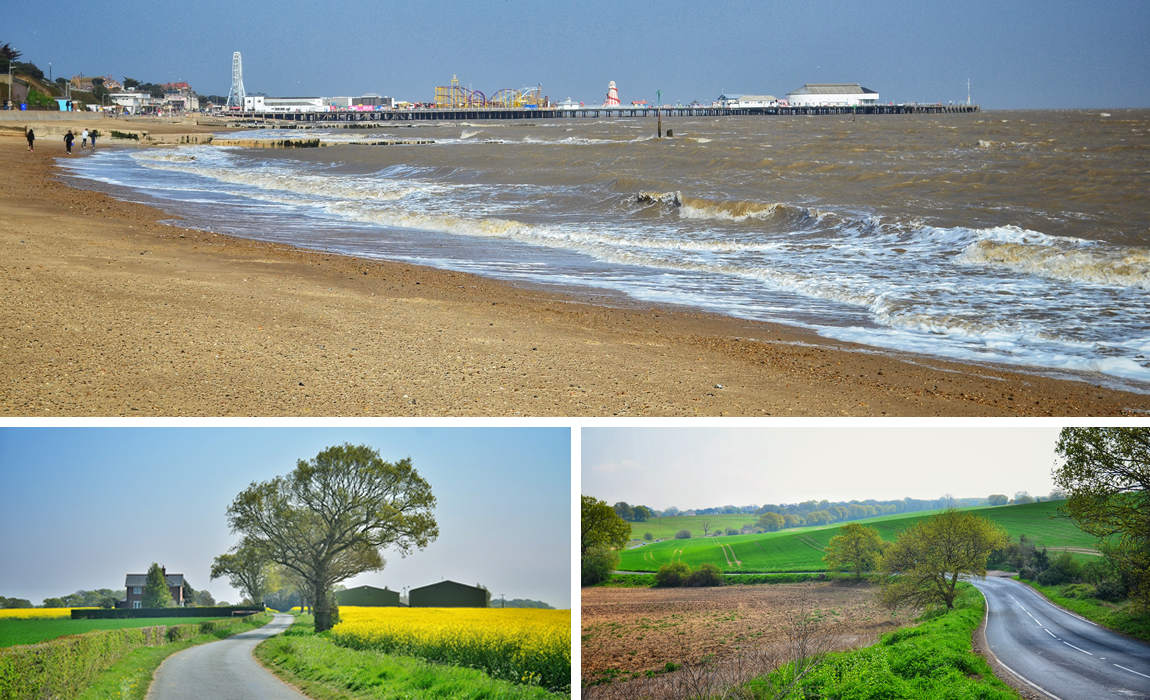 The opening round would attract an array of top competitors in the main BRC1 class, as well as its supporting categories. With 14 stages totalling just over 52 miles of competition through the countryside roads and lanes of Essex; the sun would shine on the Sea-Side town of Clacton for what would deliver very close fought battles across the field.

The event began on Saturday evening with two runs over a short 0.78-mile spectator-friendly Special Stage along the seafront. The crowds looked on whilst Irishman Keith Cronin topped the timings as he began his quest for his fifth BRC title. JBRC returnees Eamonn Kelly and Conor Mohan would be the quickest Juniors crew off of the mark in their Rally4 Ford Fiesta. 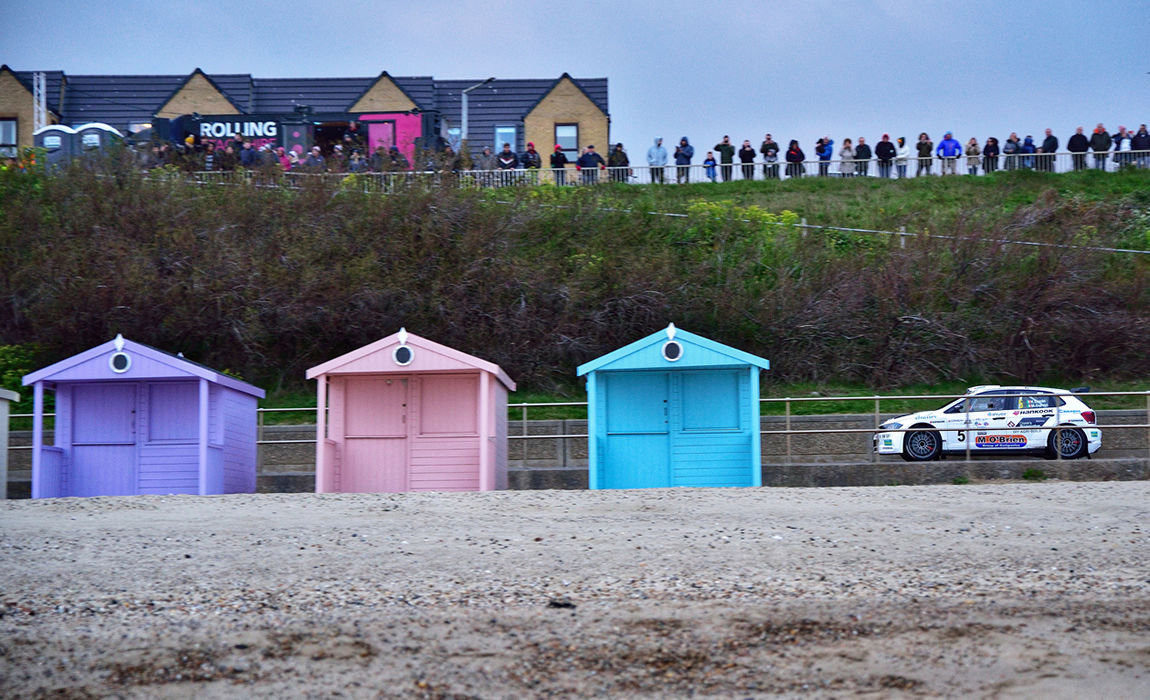 With the main meat of the rally consisting of three loops of four Asphalt stages on Sunday, the action resumed the next morning with the opening 6.46-mile test. This opening stretch of road was the longest stage of the rally, it was fast and flowing in places and would see Keith Cronin continue to build on his early overnight lead, to set the early pace of the rally in his recently acquired VW Polo GTI R5 car. 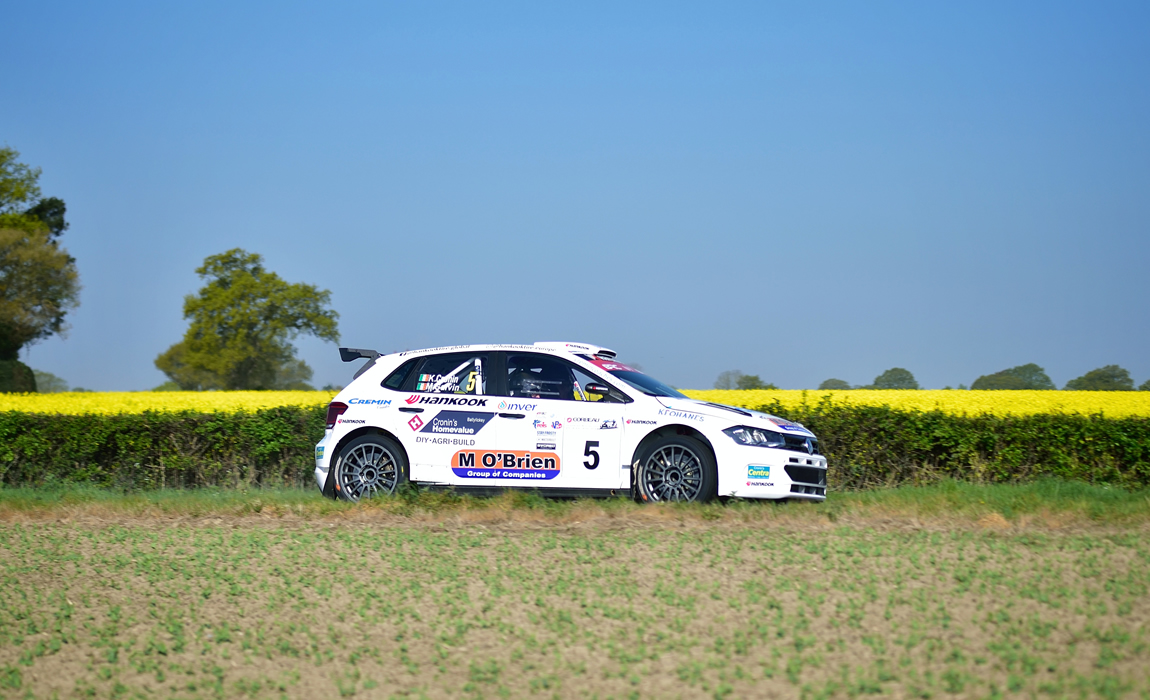 Getting the better of the Hyundai i20 R5 of James Williams by 1.6-seconds, Cronin alongside Co-Driver Mikie Galvin would be the ones to set the benchmark. Despite having a bit of a moment towards the end of that opening test, Cronin who was off to a flying start also reported that he thought that the stage had less grip than he was originally expecting.

Eamonn Kelly thought that his notes for that opening test of the day were a little on the safe side and coupled with his brakes going off early on, it was a little knock to the confidence early on. But nevertheless, the young Irish man had got the early jump by just a single second over Norwegian Ola Nore Jr who was getting his first real taste of British Rallying. 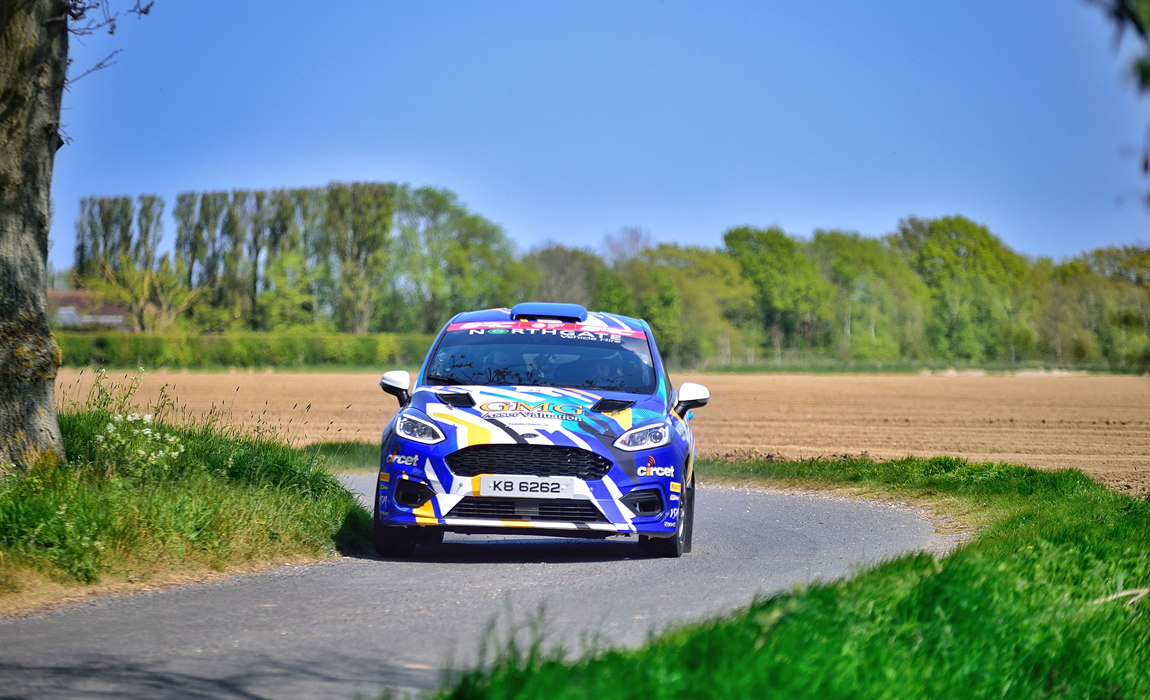 Throughout the first loop of competition, Cronin bagged a full complement of stage wins to extend his lead at the front to 6-seconds over Ruairi Bell and his Co-Driver Max Freeman in the Skoda Fabia. Three times BRC bridesmaids Osian Pryce & Noel O’Sullivan were just 0.8-seconds behind Bell in third. 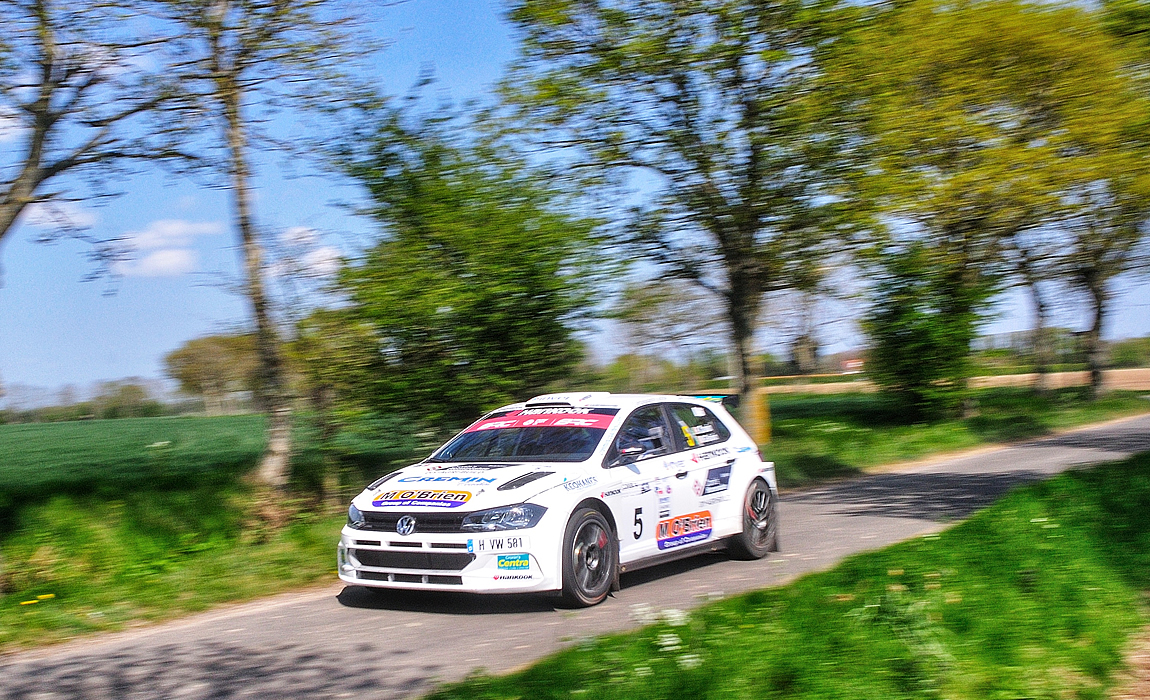 “It’s good to be leading but there’s not much within the top four. We were a bit all over the place in the first two but I settled down in the last two with a lot better rhythm. The car feels really good and I’m very happy with the morning.”

Bell who was out on his BRC1 debut was putting in a stellar performance on only his third event ever in the Skoda Fabia, fighting against Cronin who is a four times BRC champ made for an impressive start to his campaign. 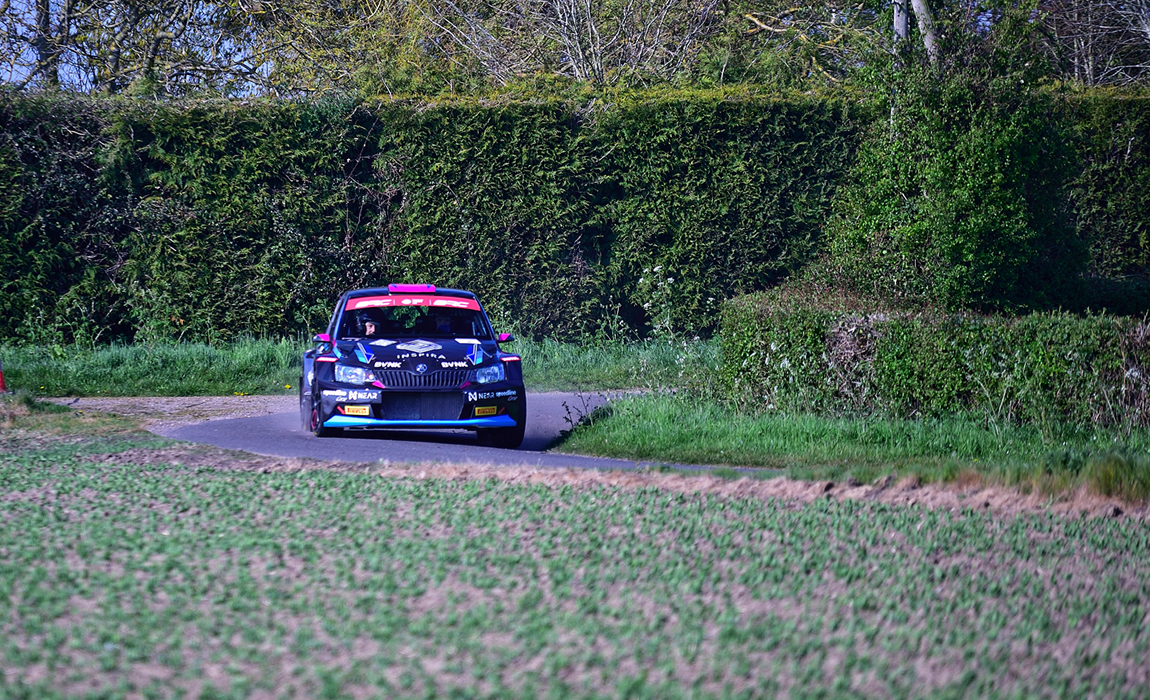 Bell was not overthinking things and was just focusing on the road, but the car felt good. He was looking to build on his morning’s performance stage by stage but acknowledged it was a case of knowing the limits of the R5 machinery.

Pryce’s morning was OK, with some fine-tuning to the set-up of the car in the first service halt, he was slowly moving in the right direction. The Welshman was searching for that title bit more gain in time to get just that little bit closer, in order to mount a challenge against Cronin. But for the morning loop, he was happy and not too stressed about his position. 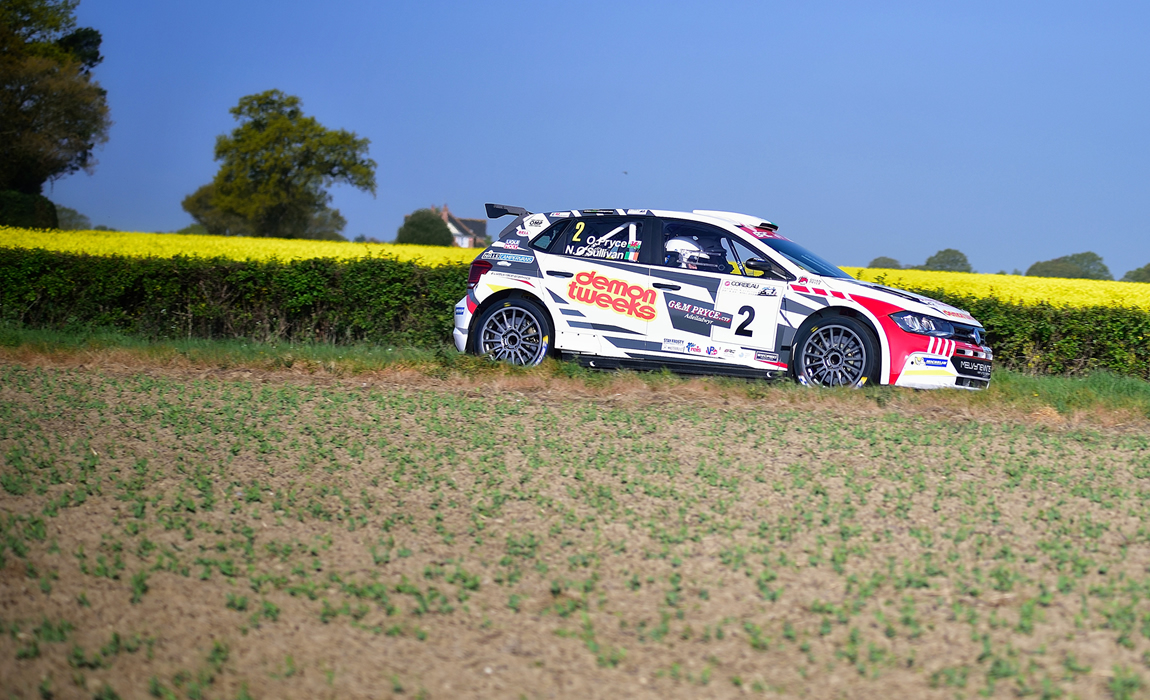 Putting an opening stage half-spin aside, Kyle White had made steady progress over the morning’s loop of stages in the Juniors. Behind the wheel of his new Peugeot 208 Rally4, he had managed to catch and pass Eamonn Kelly in the Rally4 Ford Fiesta. Just one second was separating the two Juniors by the time they reached the morning service halt. White’s early performance at his JBRC debut event had come as a little bit of a surprise, yet he was promising to go a little bit harder moving into the next loop. 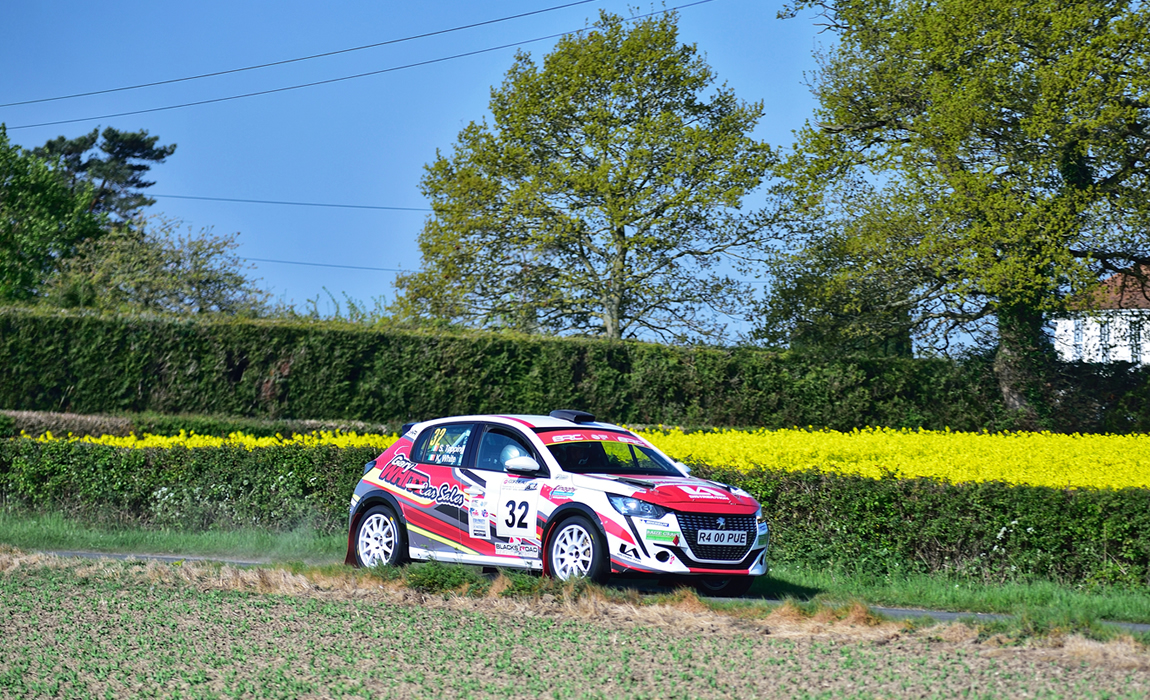 Altogether there were just 3.5 seconds across the top three leading JBRC crews after six stages. In an attempt to come back at White in front, Kelly was trying to keep a level head, but at the same time trying his upmost at being smart with one eye on the Norwegian behind him on the road.

As the crews entered the middle loop of stages, second place man Ruairi Bell alongside Co-Driver Max Freeman unfortunately found themselves parked up in SS7 after suffering some damage to the Skoda Fabia’s radiator. After pushing Cronin throughout the morning loop, their impressive pace was unfortunately not going to be rewarded. This promoted Osian Pryce into second, and the Welshman (who reported that the car was feeling good) was now on a bit of charge. Posting three fastest stage times on SS7, SS8 and SS9, Pryce had closed the gap down to Cronin, who thought that he was on the wrong tyre choice. James Williams in the Hyundai i20 was holding the third spot, but not before SS9 was stopped due to Gary Pearson putting his Ford Fiesta off into a ditch and into retirement. 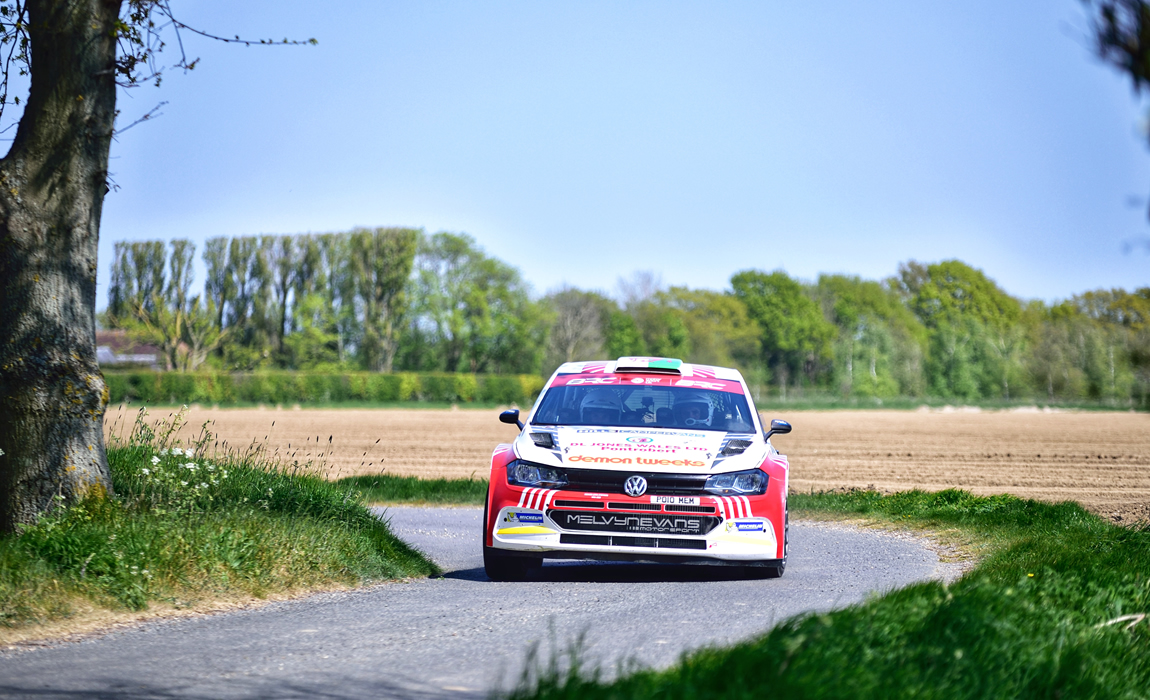 Times were ultimately scrapped from Stage 9 and Cronin managed to snatch the final stage win of the middle loop; leaving Pryce with some 4.3 seconds to find over the final loop of stages.

In the Juniors, Kyle White dropped back from the lead over the course of the middle loop, leaving Kelly and Nore scrapping it out for the lead. Kelly and Nore were going head to head in their mission to take the opening round glory. 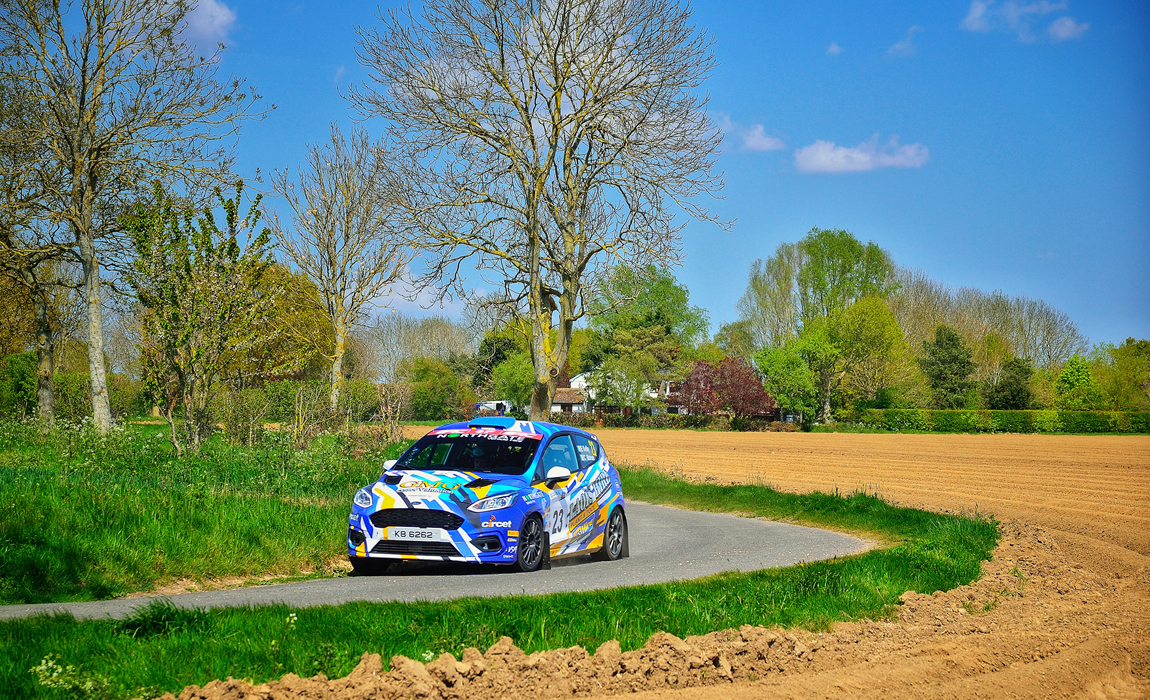 The pair posted the exact same stage times on SS10 with Kelly ending that loop with a 2.4-second advantage over Nore, with White just one-tenth off Nore in third.

Pryce had just four stages to throw all that he had at Cronin. Unsure if he could hold Pryce off, Cronin was pushing and admitted that he was on the limit and said he had “not a lot left”. 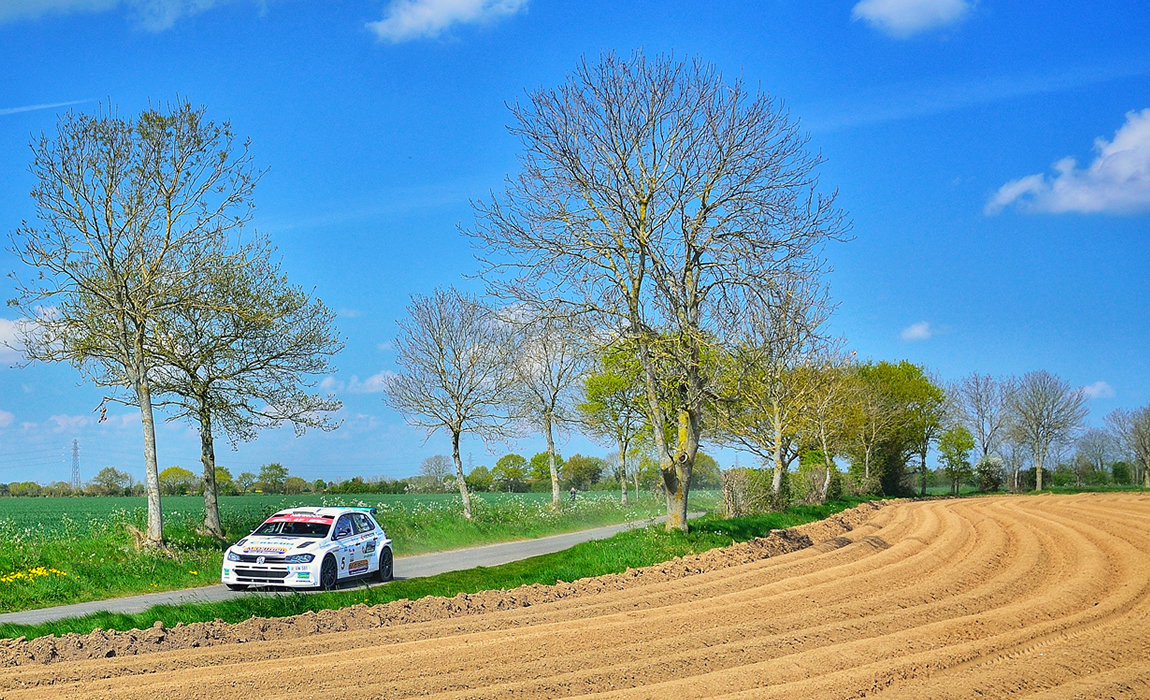 On SS11 the first “longest” stage of the final loop of the rally, Pryce took another 1.4 seconds out of Cronin, reducing the gap down to less than 3 seconds; but Pryce was running out of stage mileage fast.

In the very next stage, Pryce pulled it out of the bag, he was 2.9 seconds faster than Cronin which had finally given him the lead of the rally with just two stages to go. But there was still only just half a second between the pair heading into the penultimate stage of the rally.

At this point in the proceedings, it was still anyone’s guess as to who was going to come out on top at this opening round of the Championships. But for sure Cronin was now on the back foot and now for the first time in the rally found himself having to chase down Pryce this late in the day. 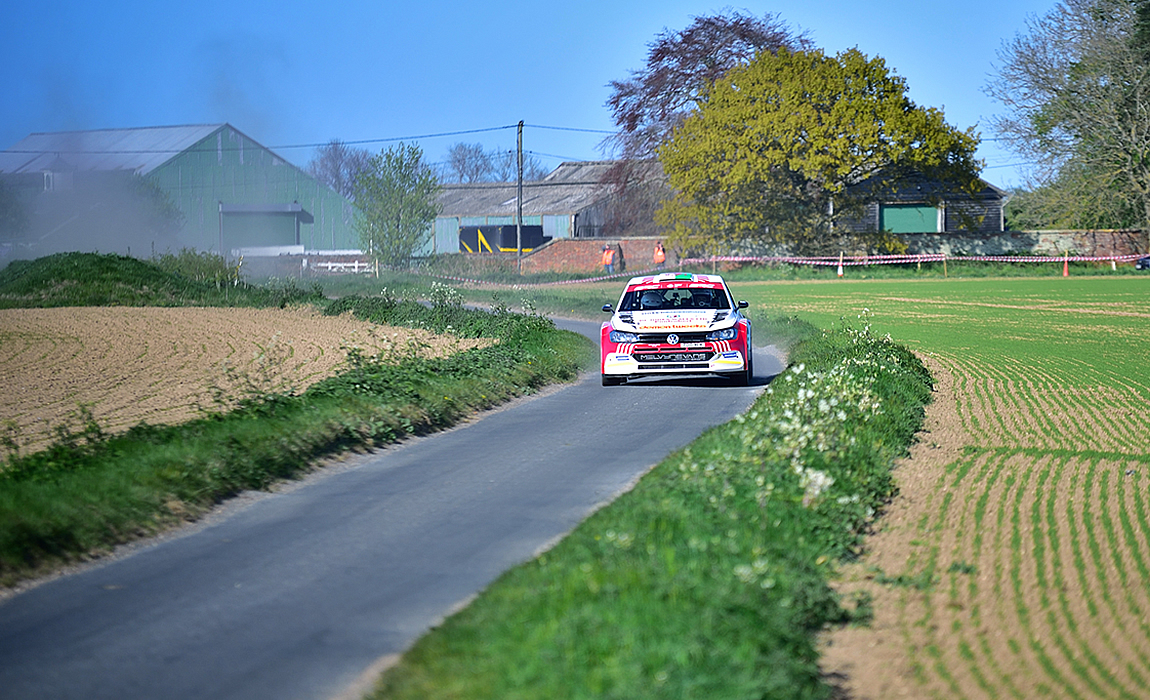 Pryce continued to apply the pressure and would finally put things to bed in that penultimate stage of the rally. By posting the fastest stage time which was 3.3 seconds faster than Cronin, the tides in Clacton On The Sea had now well and truly turned in Pryce’s favour. Pryce entered the final stage with a 3.8-second advantage over Cronin.

Osain Pryce alongside Co-Driver Noel O’Sullivan emerged from the final 2-mile stage of the rally victorious. Signing off with a final stage win, the pair crossed the finish line on Clacton Sea Front with 5.4 seconds in hand, to take the honours at the opening round of the 2022 British Rally Championships. 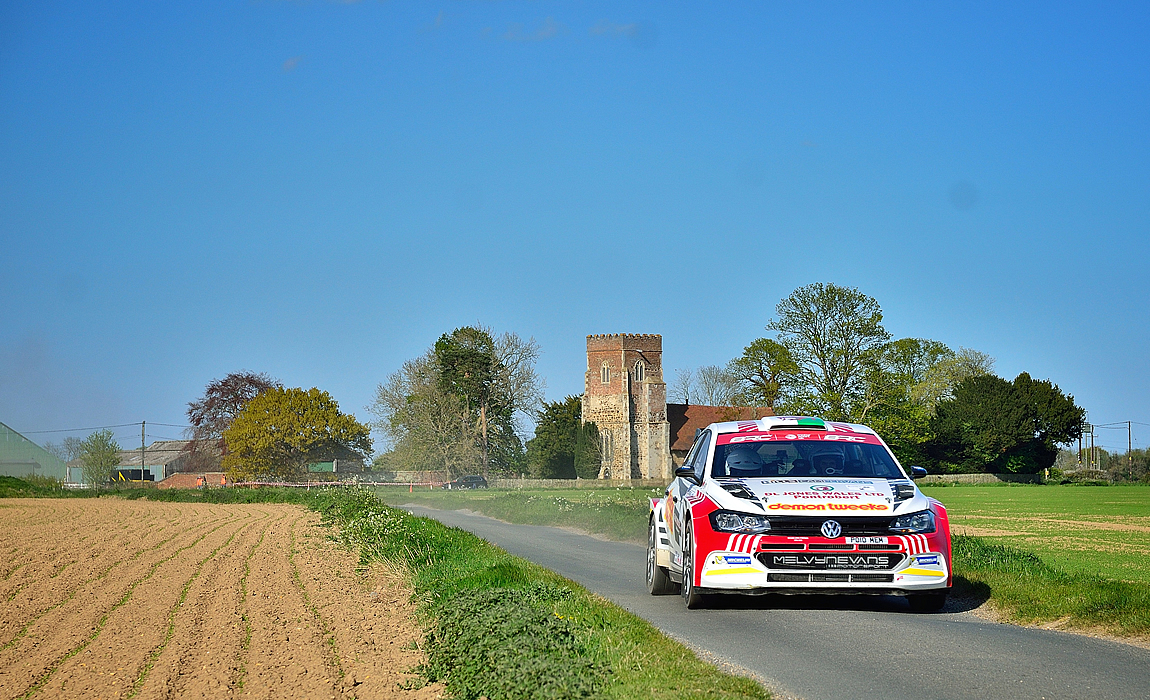 After chasing down Cronin for much of the rally, Pryce had really turned things around to end the day on high and it was a great way to kick start his 2022 campaign.

“It’s special, I didn’t think it was possible, to be honest. Big thanks to the team, they turned the car around this morning and just made it that sweet thing that we really were looking for. Well chuffed really, considering I wasn’t coming on Thursday, so we’ve had a rocky road.“

Irishman Keith Cronin, a four-times BRC Champ along with Mikie Galvin beside him calling the notes had led the rally for the majority but were ultimately unable to hold off a surging Pryce. 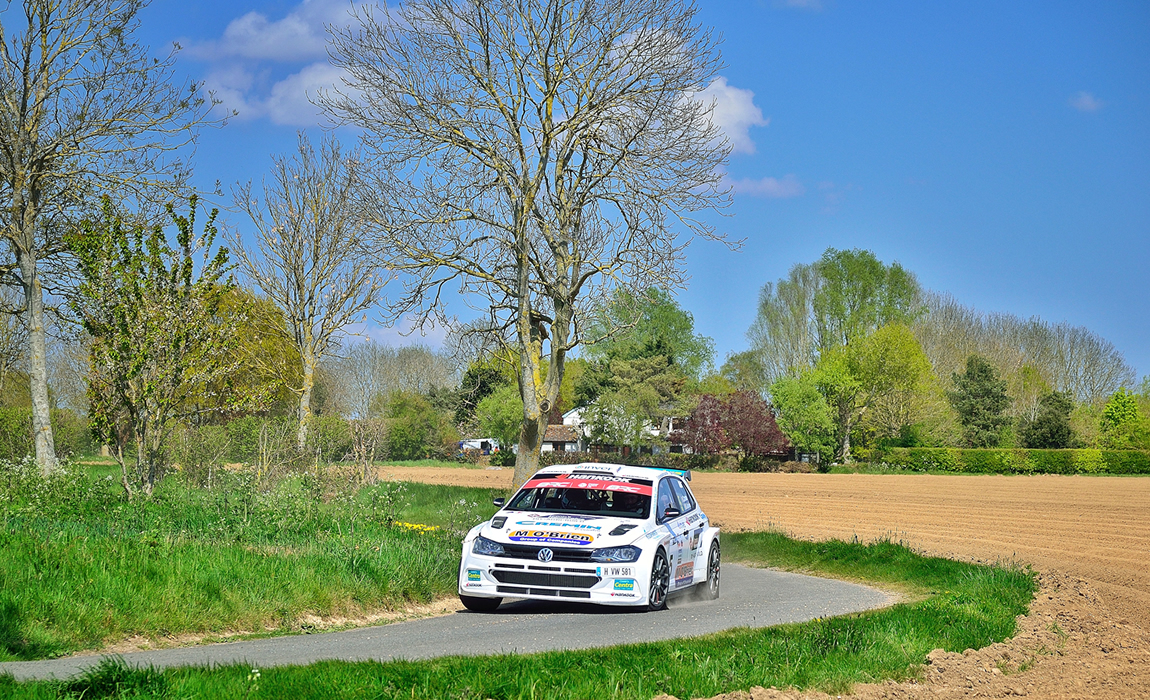 “A very good result, a big step up from last year” “We were very close today, especially in the early part but the second and third runs they just seemed to get ahead of us a bit but it’s a good start in the Championship for us.”

James Williams alongside Dai Roberts rounded off the third spot on the podium in what he described as “an awesome days rallying” for his first BRC outing in the Hyundai i20. After little seat time in a rally car over recent years, it was good to be back and mixing it up at the sharp end; for Williams, it was a more than a satisfying result and was a promising start to boot. 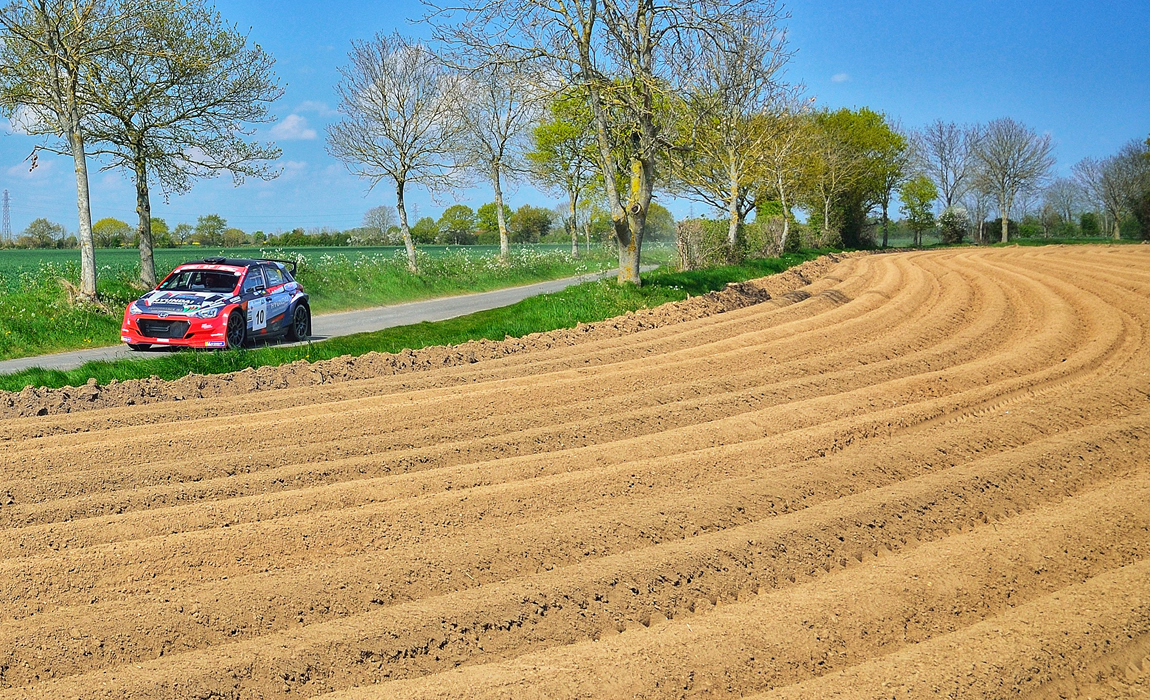 In the BRC National class Craig Jones “Drove the flipping door handles off” his Ford Fiesta to beat Michael O’Brien to the National honours. Jones with Co-Driver Ian Taylor said that he had the drive of his life in the last loop of the rally, in his effort to catch and overhaul O’Brien. 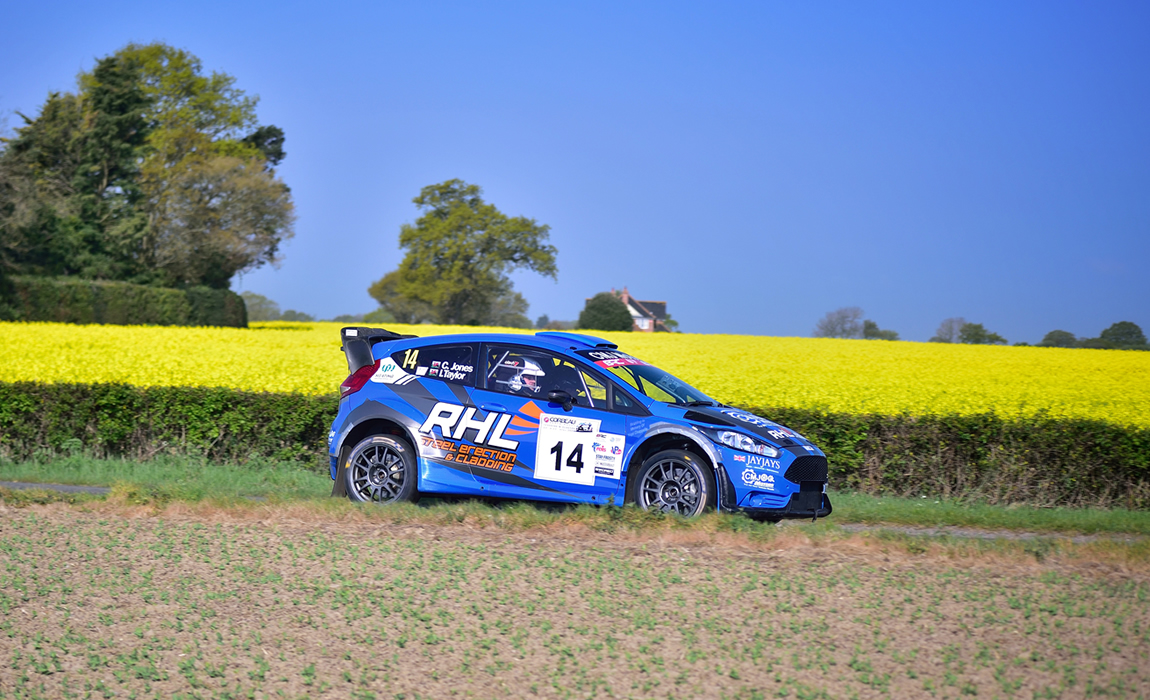 After resetting the car back to basic at the first service halt, the improvements then came over the two-afternoon loops and the pair crossed the finish line with 3.9 seconds in hand. This opening round win coupled with their playing of the joker had gotten their 2022 National Campaign off to the perfect start.

The close battles for the honours did not stop with the BRC1 and National classes; the Juniors also delivered a thrilling opening round scrap. In the early part of the rally, Kyle White showed promise in his Peugeot 208 Rally4 but as the rally progressed a close fight developed between JBRC returnee Eamonn Kelly and JBRC newcomer Ola Nore Jr.

Both were driving the wheel nuts of their Rally4 Spec Ford Fiestas in search of the win. It wasn’t until the penultimate stage in the rally when Norwegian Nore finally took the last lead change in the rally to overcome a fierce challenge from Kelly to secure the opening round victory. Clacton was his first venture into British Rallying and he had delivered already, all under the watchful eye of Co-Driver Jack Morton. 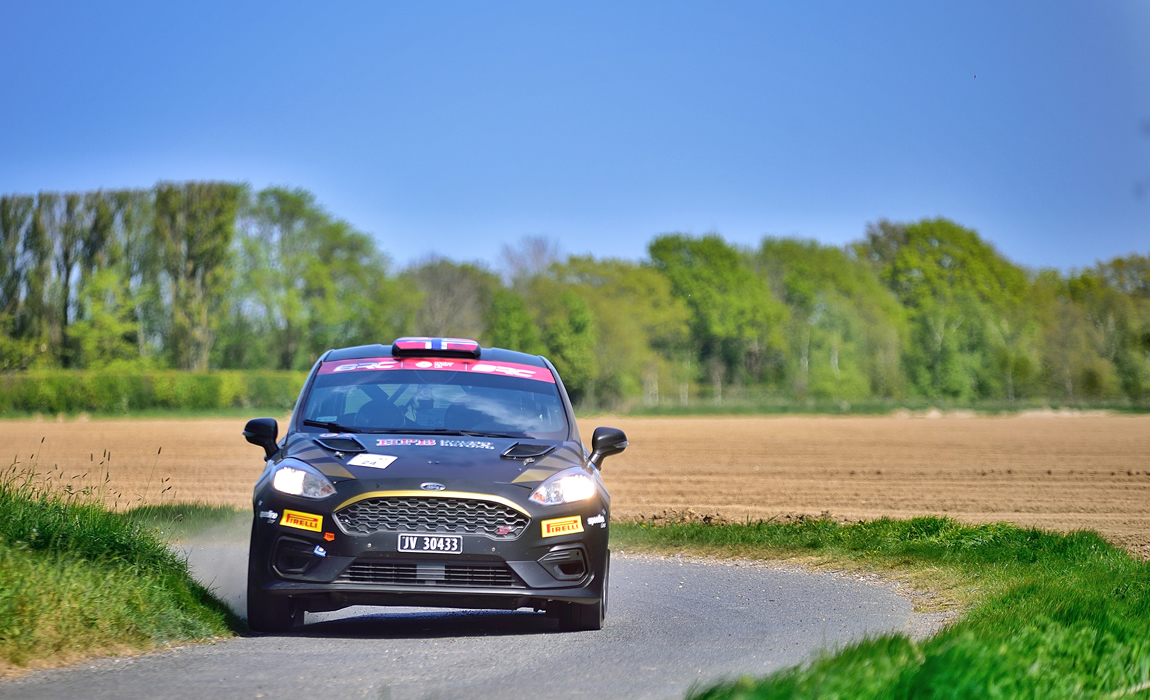 “I just want to do my best, have fun and do new rallys. I didn’t think I was winning but here I am. It is a good feeling.“

Second place man Eamonn Kelly was clearly a little bit disappointed to be pipped by Nore but acknowledged that it was a great battle for which had delivered him a good haul of points from a good result. 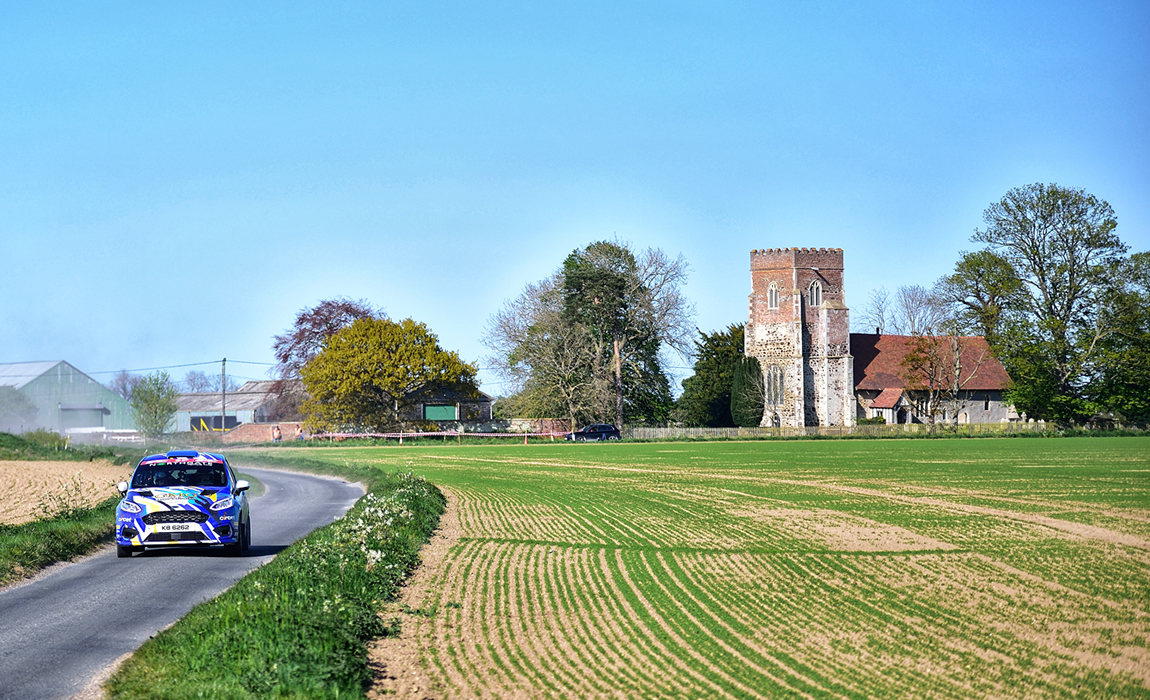 The British Rally Championship remains on tarmac but moves north to the town of Duns on the Scottish Borders for Round 2 at another closed road stage rally, the Beatson’s Building Supplies Jim Clark Rally (May 27th & 28th). The Jim Clark Rally has always delivered a strong lineup of asphalt stages to test the best and will feature both some classics along with some brand new stages.