The British Rally Championship arrived in Builth Wells, Wales for Round 3 of the 2022 season and ventured onto the loose stuff for the first time this year at the Nicky Grist Stages. Organised by the Quinton Motorclub, this event first ran in the forest of Wales back in the 1980s. Whizz forward to the present day and this one-day gravel rally featured 8 stages (two loops of four) and covered some 44 competitive miles across some of the best stages that this area of Wales has to offer. 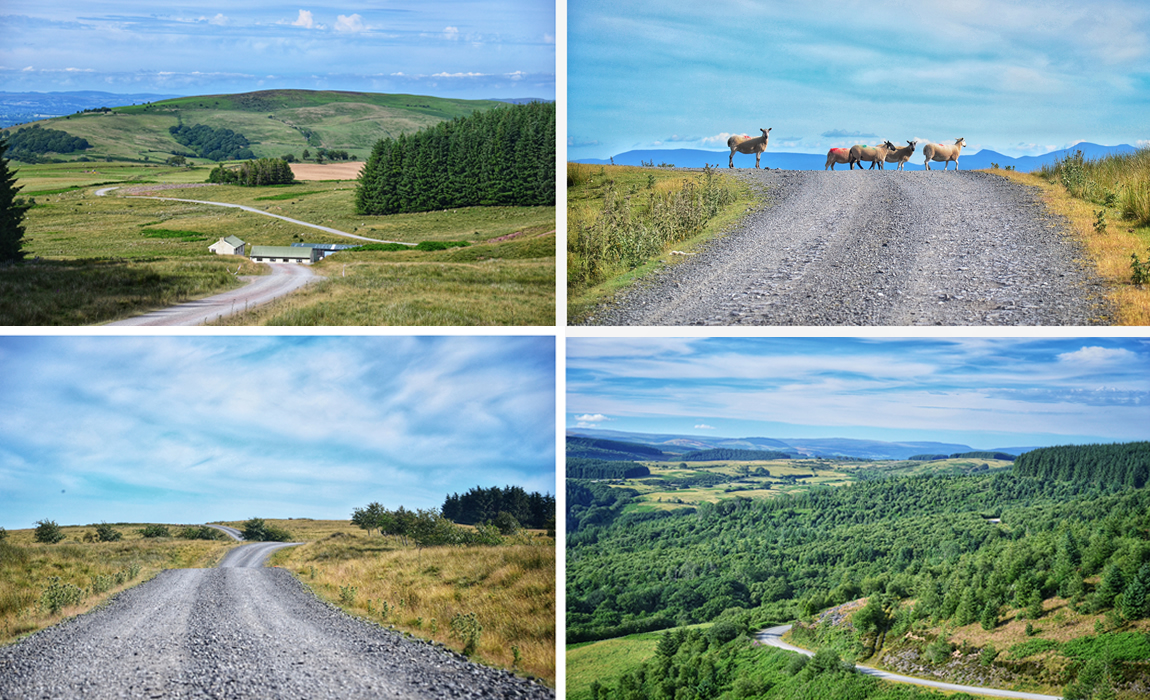 Last time out on the Asphalt of the Jim Clark, Irishman Kieth Cronin came out on top taking the lead of the series following the exclusion of Championship contender Osian Pryce. But Welshman Pryce, who held the third spot on the podium at this very rally last year, would be back at home on the gravel for what would be his 100th stage rally. And, he was looking to make amens for the disastrous outcome of the previous outing on the Jim Clark.

Pryce was quickest off the mark in his VW Polo GTI R5 car on the opening 3.5 miles test in the Northern area of the Epynt Military ranges; getting the better of the Skoda Fabia R5 that was being driven by Ruairi Bell by 1.2 seconds. Championship leader, Cronin (also in a VW Polo GTI R5) was 1.9 seconds off the pace of Pryce, but all of the top crews reported that the stage conditions were a bit looser than expected. 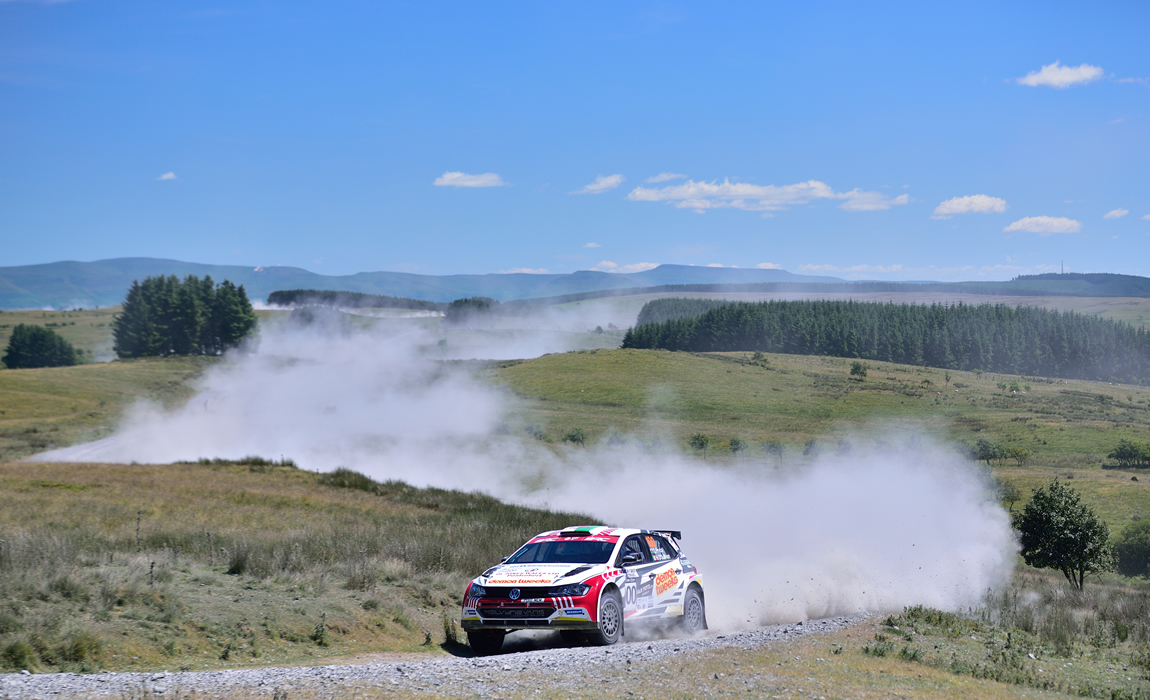 Meanwhile, in the Junior British Rally Championship, a famous name was appearing at the top of the timing sheets already on that opening stage. Max McRae (nephew of the legendary Colin McRae) who was making his Championship debut was peddling an EDL Sport run Ford Fiesta and got the better of regular JBRC contender, Kyle White, in the Peugeot 208 Rally 4 by a little over 2 seconds. 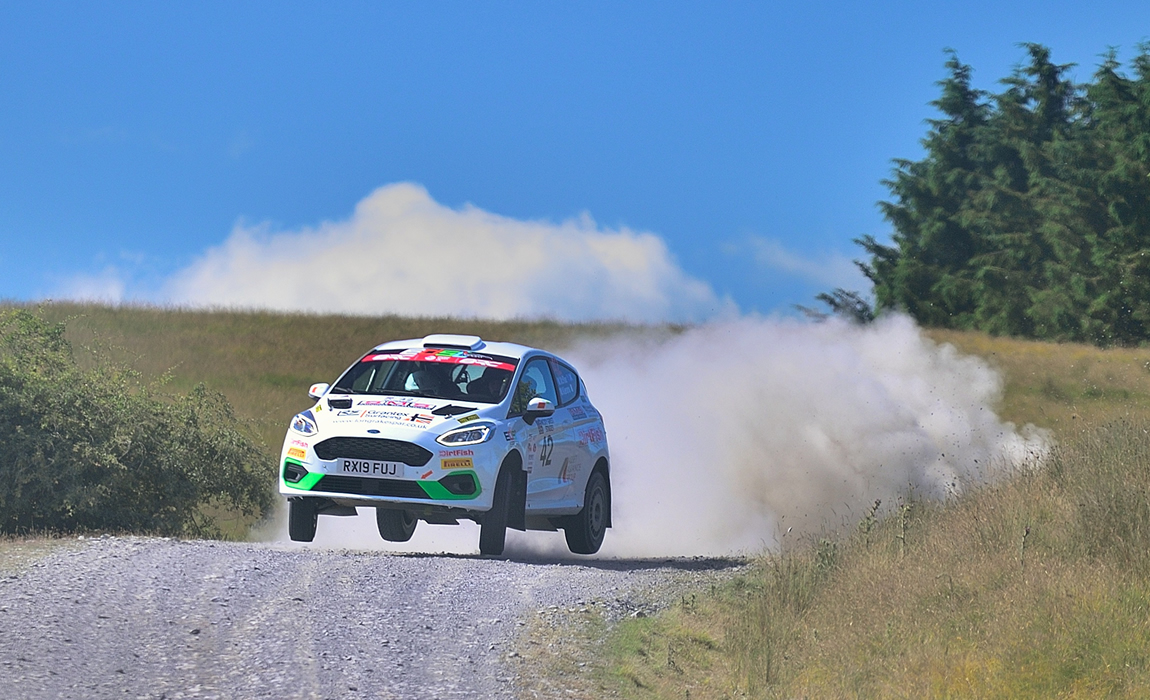 Cronin responded to Pryce in the very next stage, the slightly longer Monument test to take his first stage win and with it, taking the second spot away from Bell. Pryce stopped the clocks almost 2 seconds slower than Cronin, but at the stop line, Pryce reported that his dash was showing incorrect gear selections, which was confusing him. He did, however, manage to hold onto the lead of the rally; but only just by a tenth of a second. 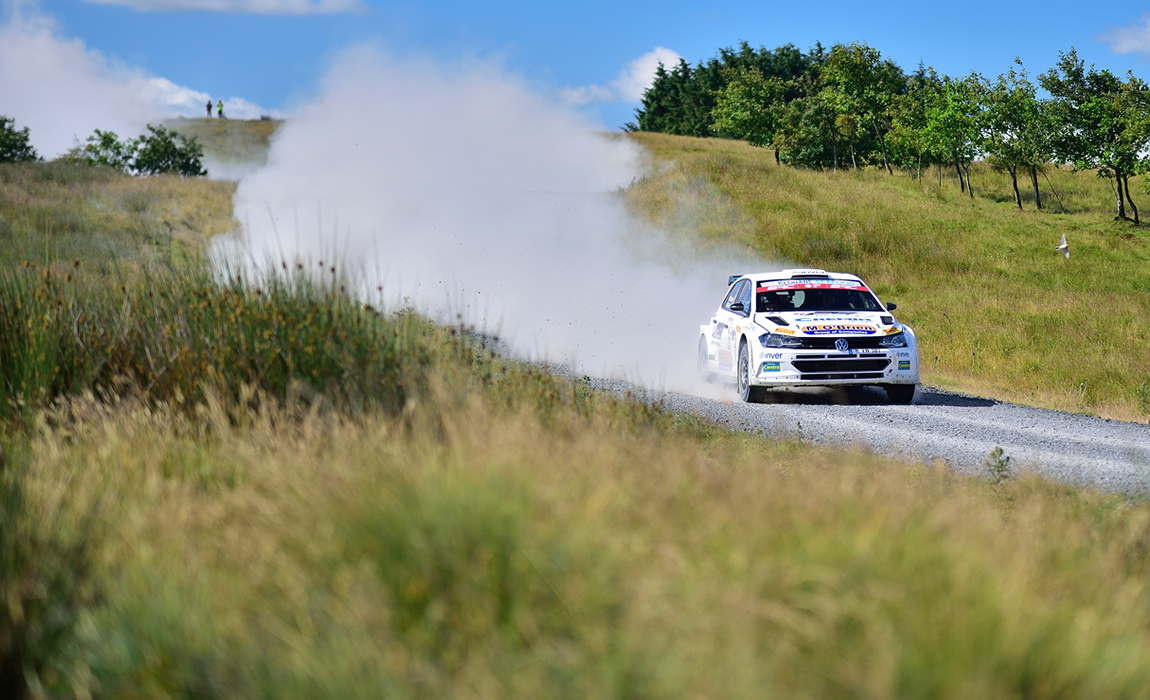 Round 2 Jim Clark National winner Alan Carmicheal was leading the way for the national crews in the Hyundai i20 R5. His closest registered national contender Michael O’Brien in the fabulous-looking Ford Focus WRC was some 16-seconds off the pace after the first two. 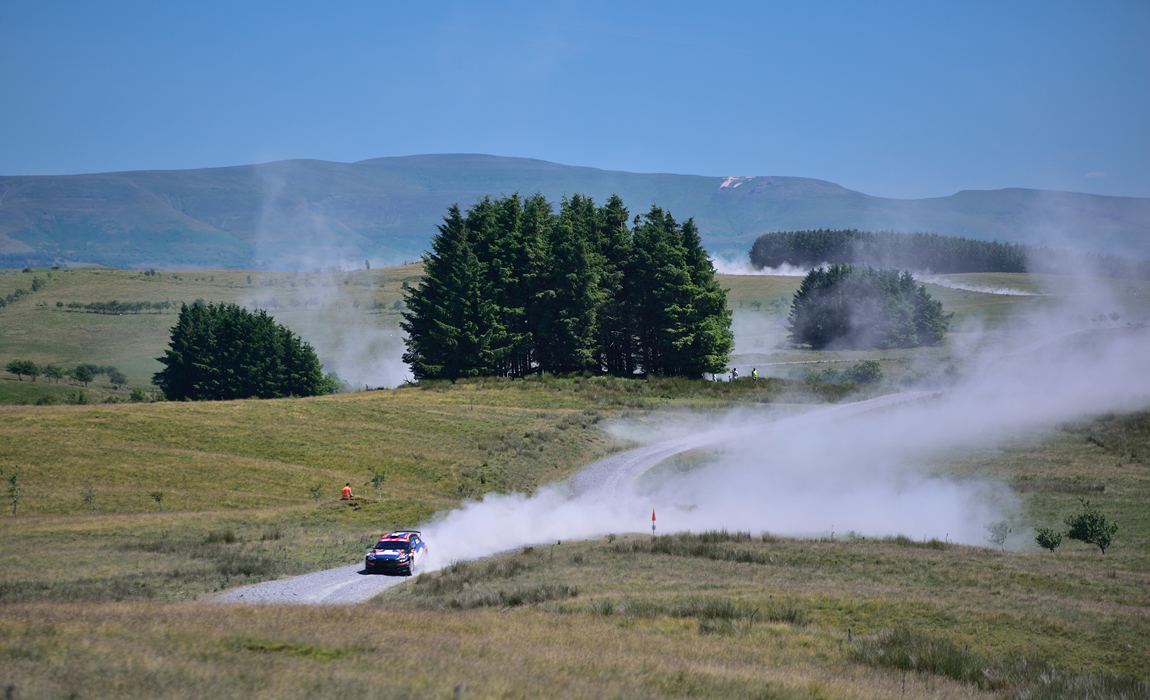 Despite lacking in the confidence department over those first two stages, Round 2 JBRC winner, Eamonn Kelly bagged his first stage win of the event in Stage 2, just nipping White by a tenth of a second. White, however, had taken the lead of the Juniors, whilst newcomer McRae slipped to second with just a second separating the pair. 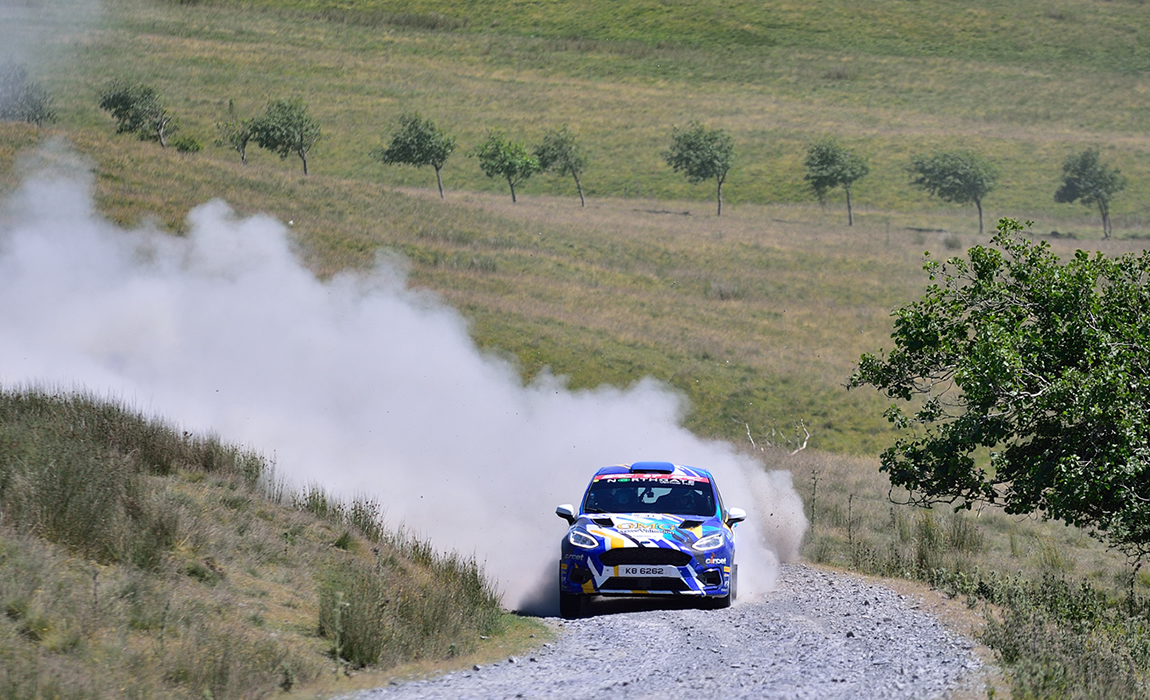 In the third stage through Halfway Forest, Pryce stepped up his game a notch taking his second stage win, which enabled him to extend his overall lead to 6 seconds over Cronin heading into the final stage of the morning loop. Ruairi Bell progressed no further in the rally retiring, which then promoted James Williams in the Hyundai i20 R5 car to third in the BRC1 class. 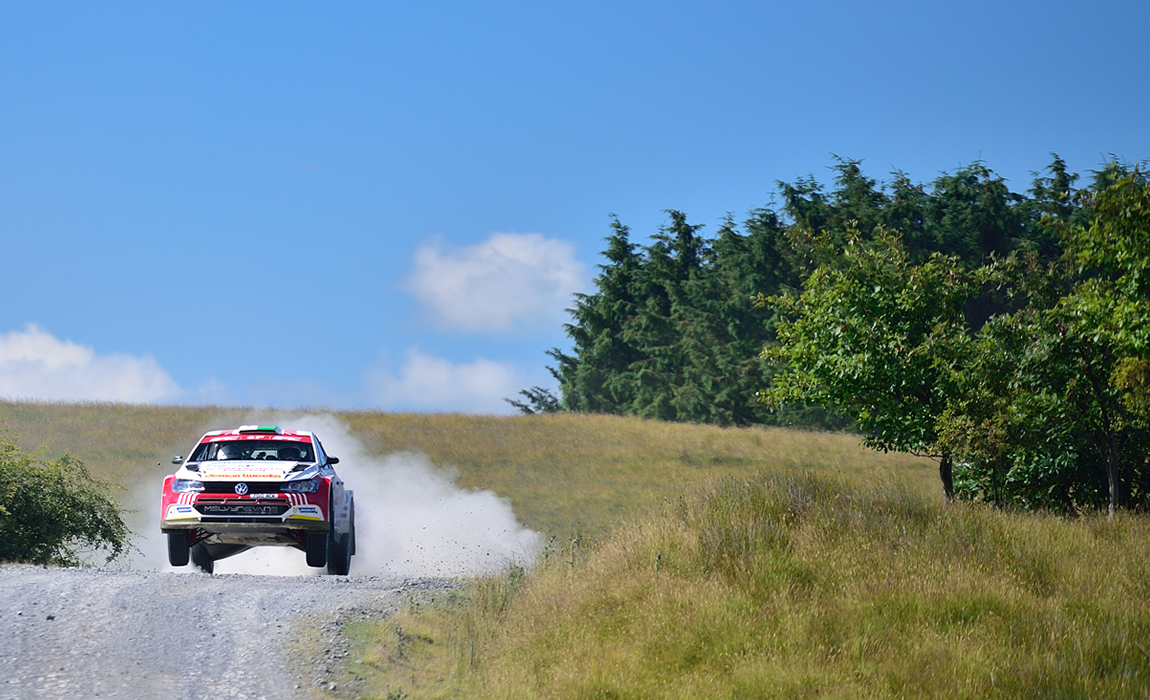 The last stage in the morning loop was the longest test on the schedule at 9.67 miles through Crychan Forest. Here is where Osian Pryce once again applied the pressure on Keith Cronin; sending a clear message of his intent. 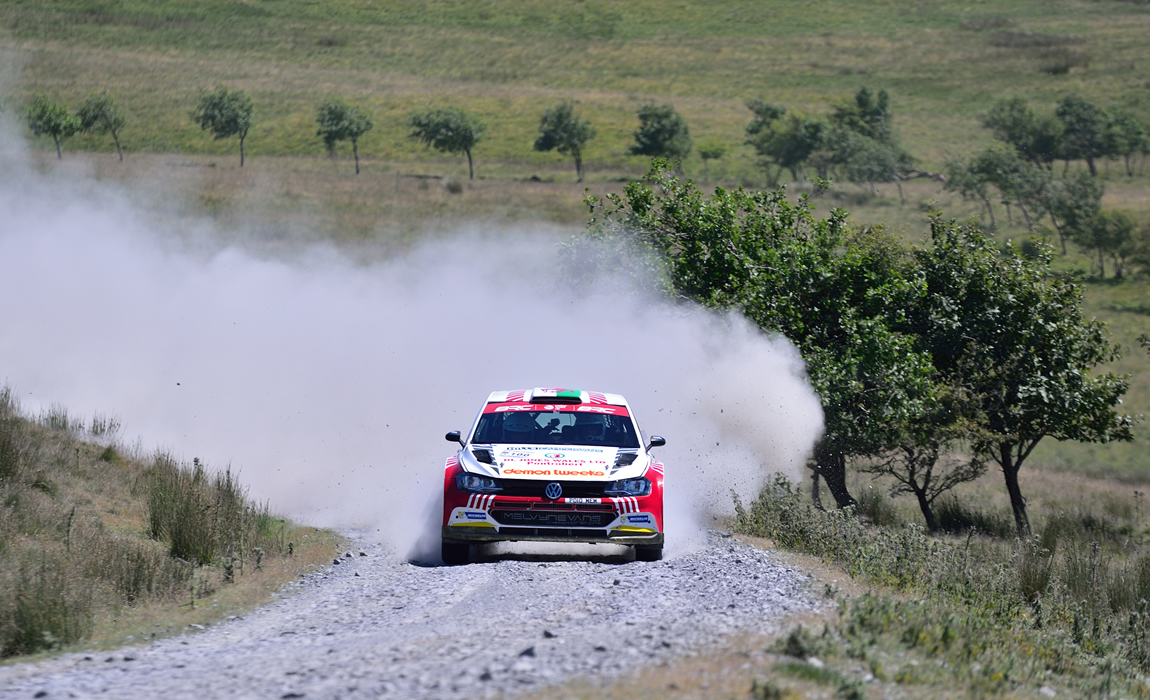 Over those two stages, Pryce had eked out a 12-second advantage over Cronin heading into the mid-day service halt back at Builth Wells, with Jason Tauber Pritchard the third BRC1 crew.

Meanwhile, in the National category, Alan Carmicheal continued to fight off O’Brian’s Focus; 5.5 seconds separated the two at the mid-point in the rally. Craig Jones in the 4×4 Ford Fiesta appeared to be struggling to get to grips with the loose and was laying in third near-on a minute off from the fight. 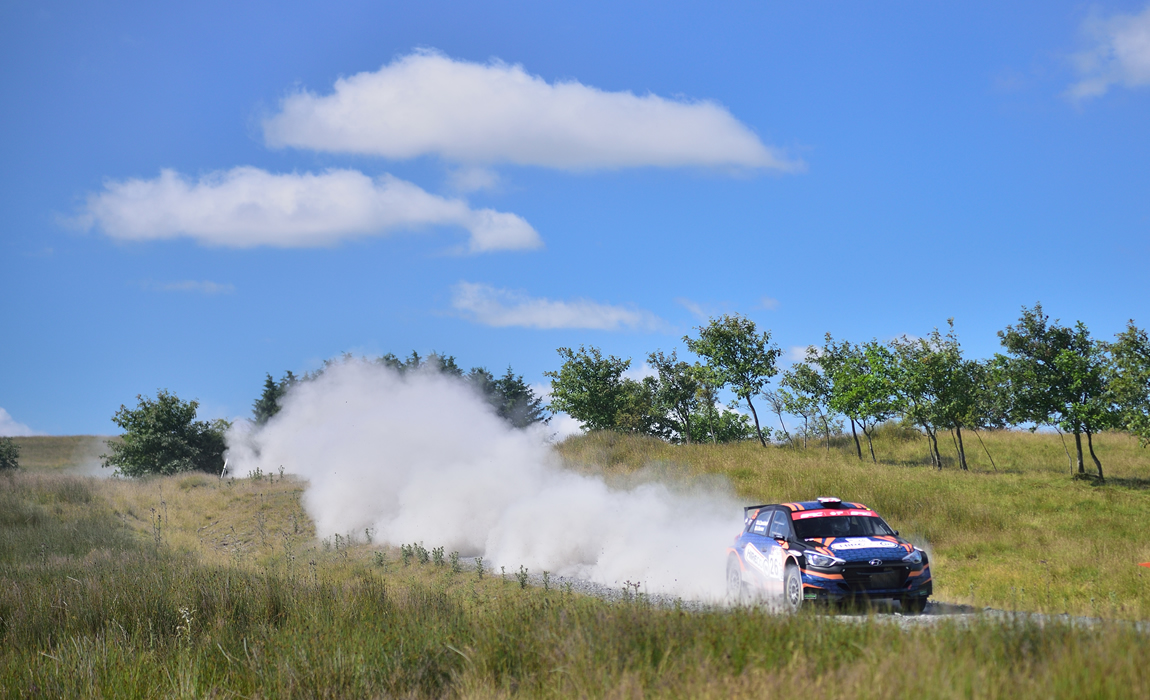 Some 10 seconds separated the leader of the Juniors, Kyle White and second place man Eamonn Kelly after the morning’s loop of action, with Max McRae laying in third a further 10.9 seconds down on Kelly; the Junior battle was as hot as the weather was. 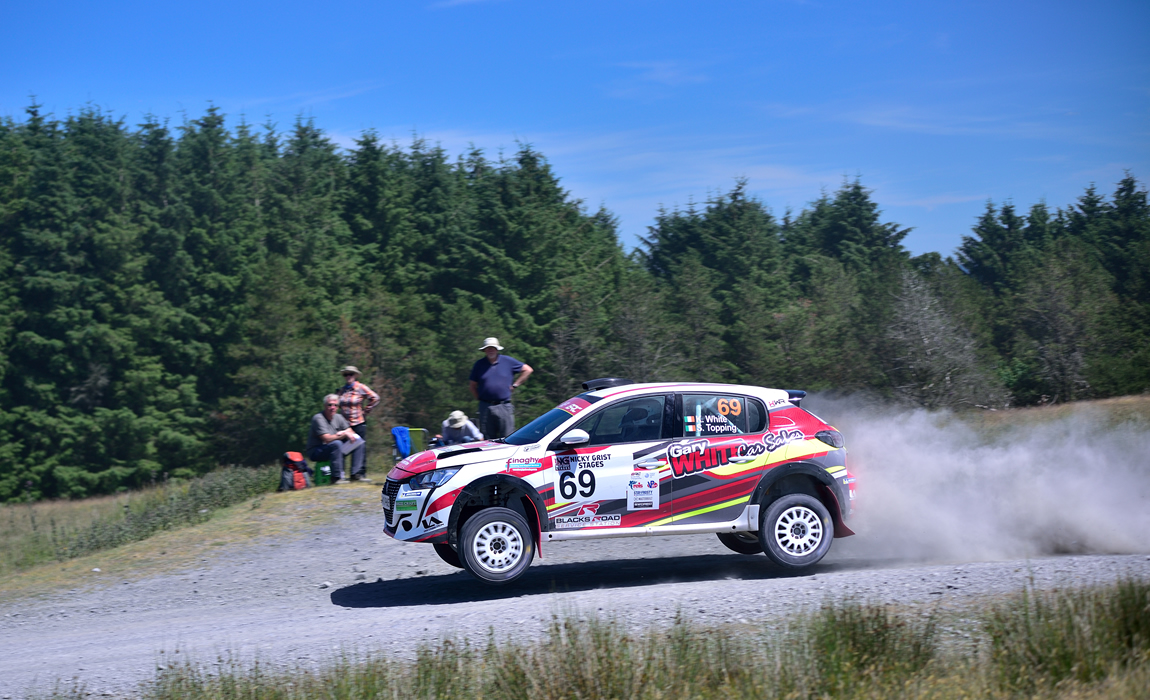 Back out after service and Keith Cronin set about chasing down the rally leader, Osian Pryce. He began his afternoons assault with a stage win through the repeated Llyn Login test, beating Pryce by just 0.6 seconds. But Pryce was determined not to let this one get away from him and fired a warning shot right back at the Irishman in the very next stage, the repeated run through Monument. 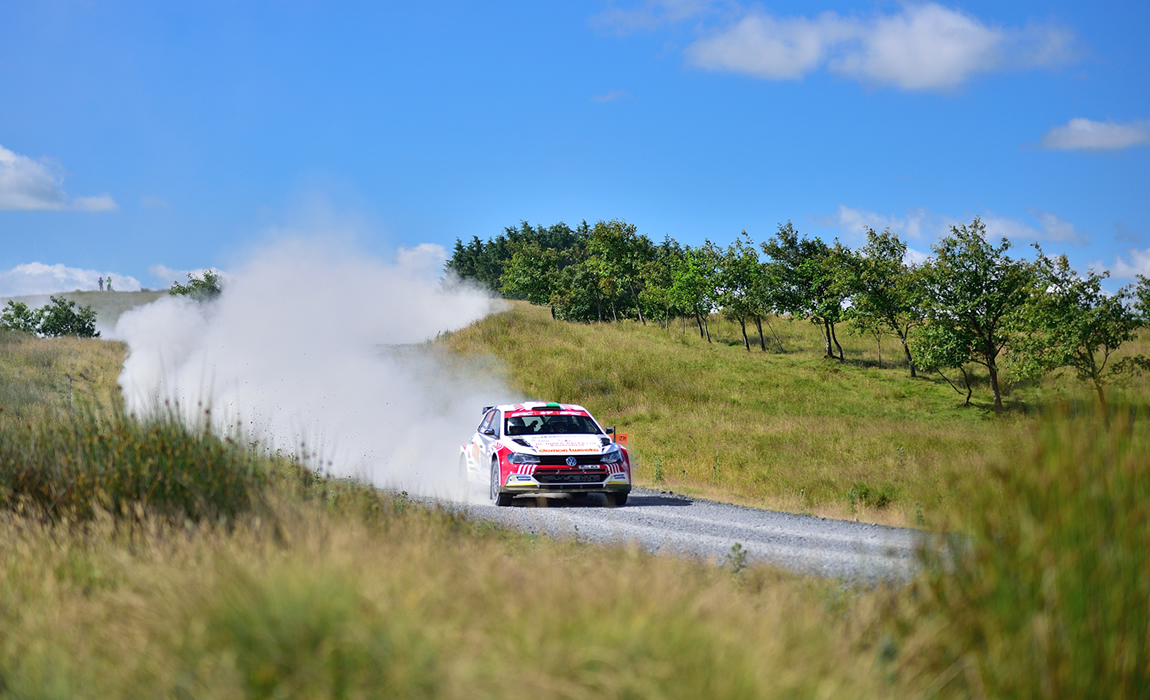 Carmicheal continued to press on in his Hyundai i20 R5 car, he was looking for his second win here on the gravel; and over the afternoons repeated loop, he was looking all set to achieve it. 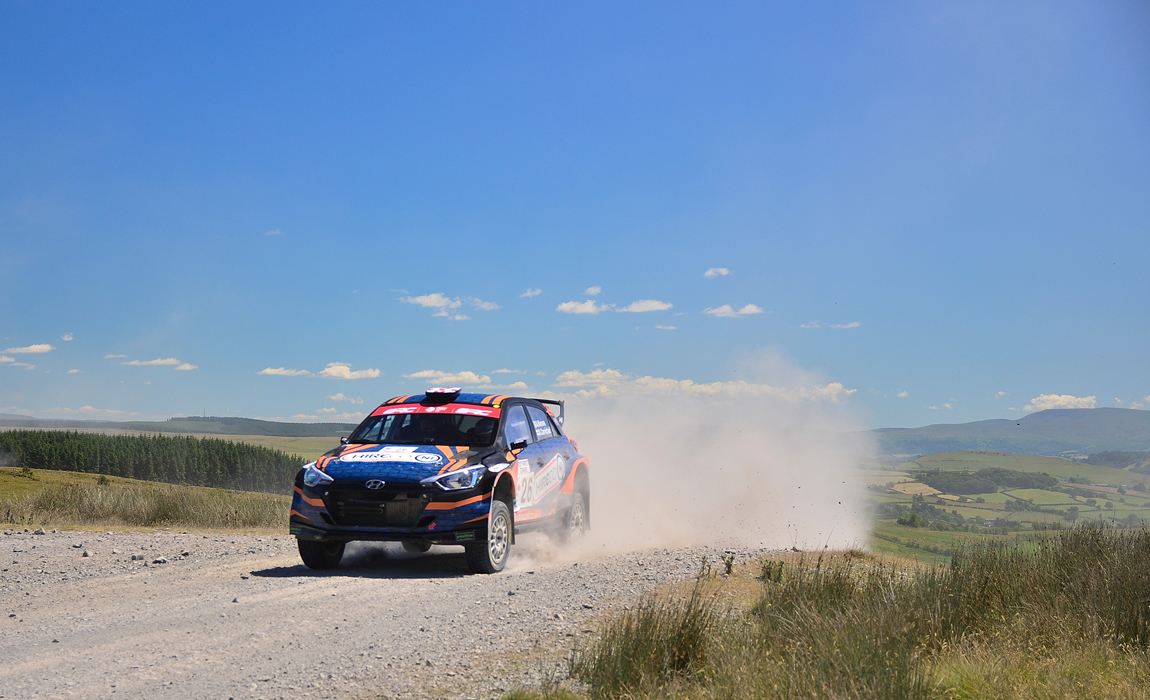 Unfortunately for his closest registered rival, Micheal O’Brian, SS6 the second pass of Monument would see him retire the Focus WRC with mechanical issues and with it, any chance of a scrap with Carmicheal was gone. 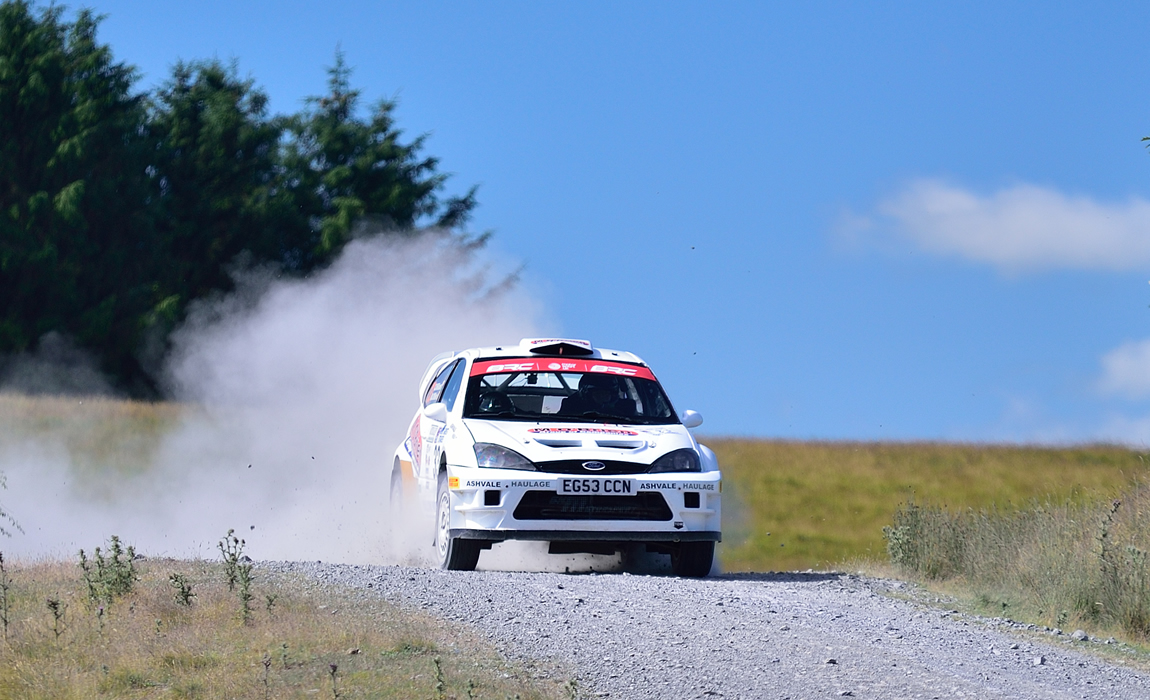 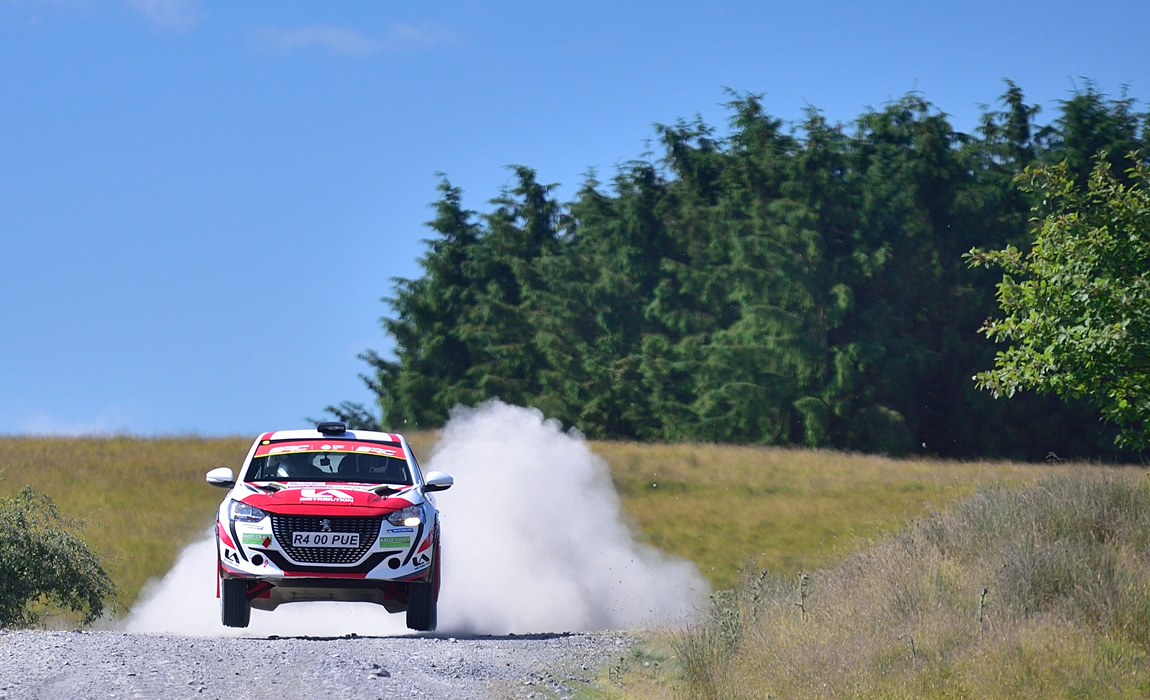 Pryce entered the penultimate stage in Halfway Forest and stamped his authority over Cronin with his fifth stage win and had extended his lead to 15.8 seconds with just one stage to go. The crews entered that final 9.67 miles of Crychan Forest; but Cronin and Co-Driver Mikie Galvin had pretty much already accepted defeat on this occasion but the pair would still score a decent points haul for finishing second. 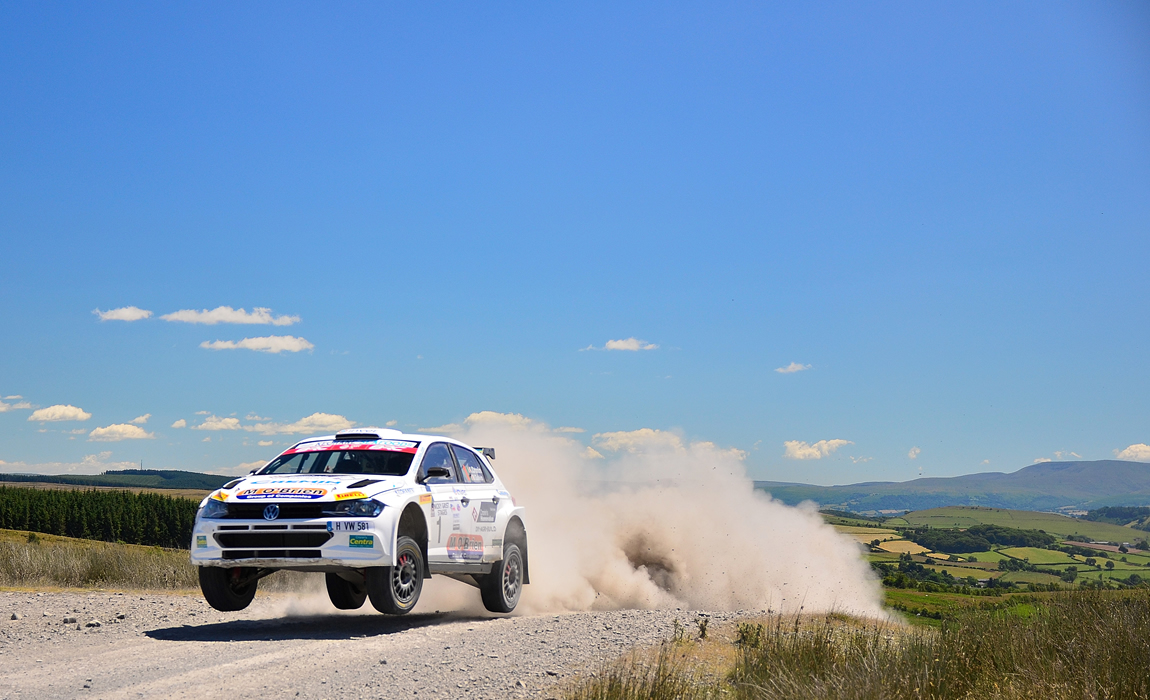 “We just drove through that last one in the end and got through it, I knew that we weren’t going to catch him but we wanted to put a bit of pressure on him.”

Welshman Osian Pryce on his 100th stage rally had done it, with Co-Driver Noel O’Sullivan beside him in the VW Polo GTI R5. Although they picked up a puncture on the final stage, with some 14.9 seconds in hand the pair had fought back from the disappointment of the previous round to take their second victory of the season thus far. 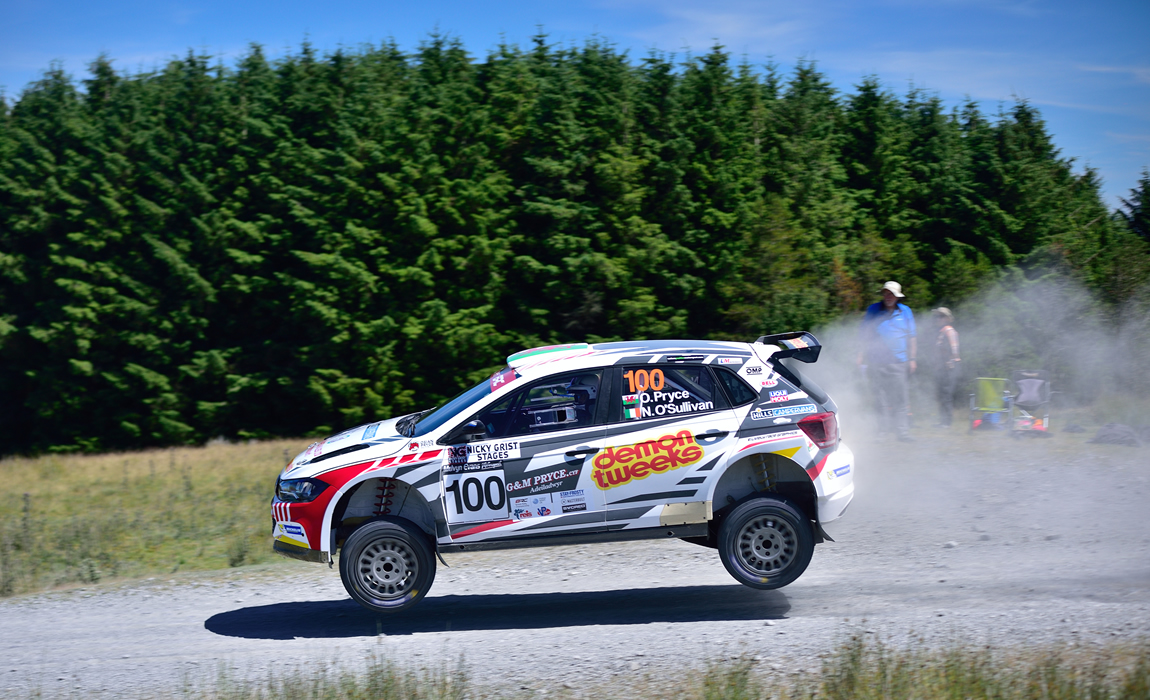 “Even with a puncture in the last stage, you couldn’t write it really. I lost a bit of self-believe after that last rally so it’s nice to get the job done, a nice mile stone. Everybody has done such a great job, Noel especially. I really enjoyed the rally, it been challenging conditions and I’m chuffed to have the win.“

Behind the battle for the win, Jason Tauber Pritchard brought his VW Polo home in third; some 9.5 seconds behind Cronin to round off the BRC podium. Prichard alongside Co-Driver Phill Clark have been making steady progress settling into not just the VW Polo GTi R5 car but also the pace of the top-flight British Rally Championship. 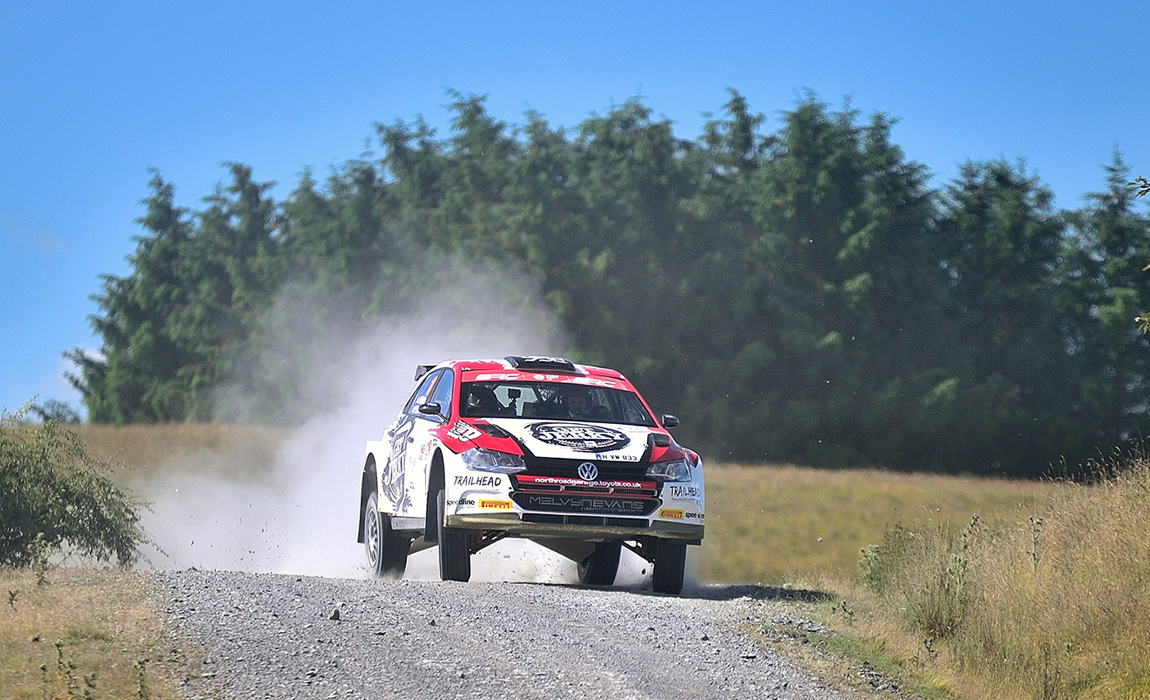 Pritchard, a local lad from Builth Wells, had not been on gravel in a four-wheel-drive car in over 10 years. He signed off his Nicky Girst Stages with the final stage win of the event through Crychan Forest; and can be satisfied with a great result in securing his first British Rally Championship podium finish of recent times.

“I’d have taken that after the Jim Clark, It’s a big difference from there. I’ve really enjoyed the day, the stages have been good and the cars been faultless.”

Following the demise of Michael O’Brian & Clair Williams from the rally in SS6, Alan Carmichael alongside his Co-Driver Arthur Kierans was left clear to bring it home for their second National Class victory of the season. 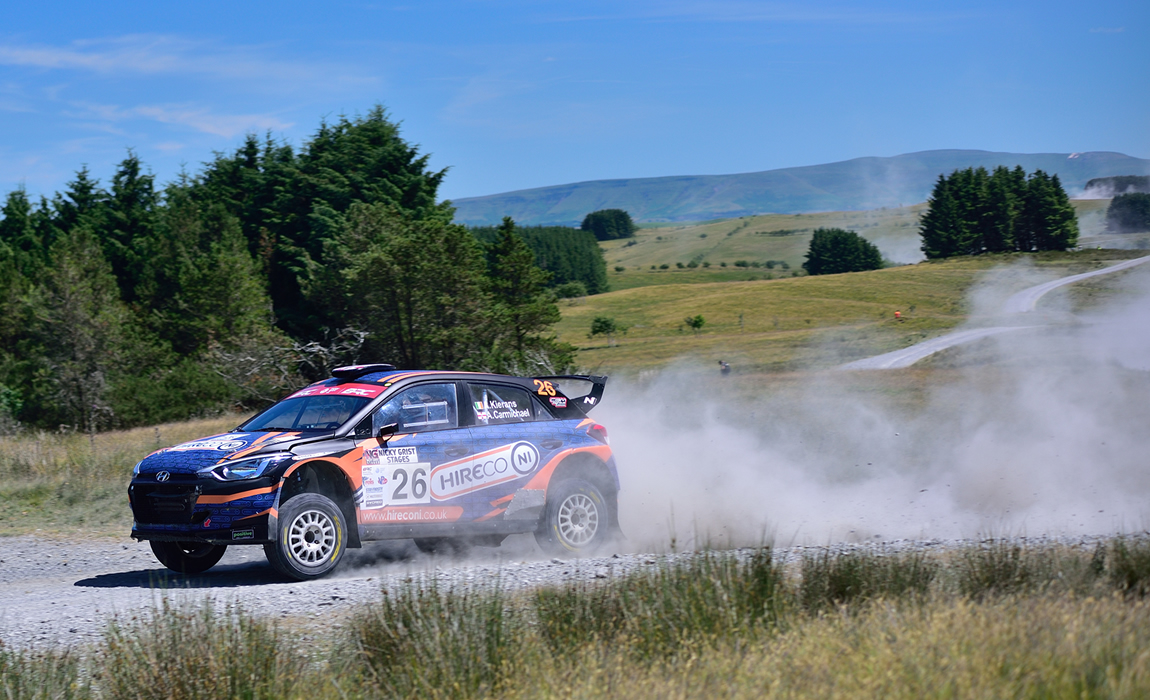 Despite the Nicky Grist only being his second event, Carmicheal now takes up the lead of the National standings just two points ahead of Craig Jones, who finished second in his 4×4 Ford Fiesta alongside Ian Taylor on the notes.

The battle for the Junior honours would rage on throughout the final two stages of the rally. Kyle White was just about managing to hold off a surging Eamonn Kelly and would head into the final Crychan test with a lead of 9.1 seconds in hand. 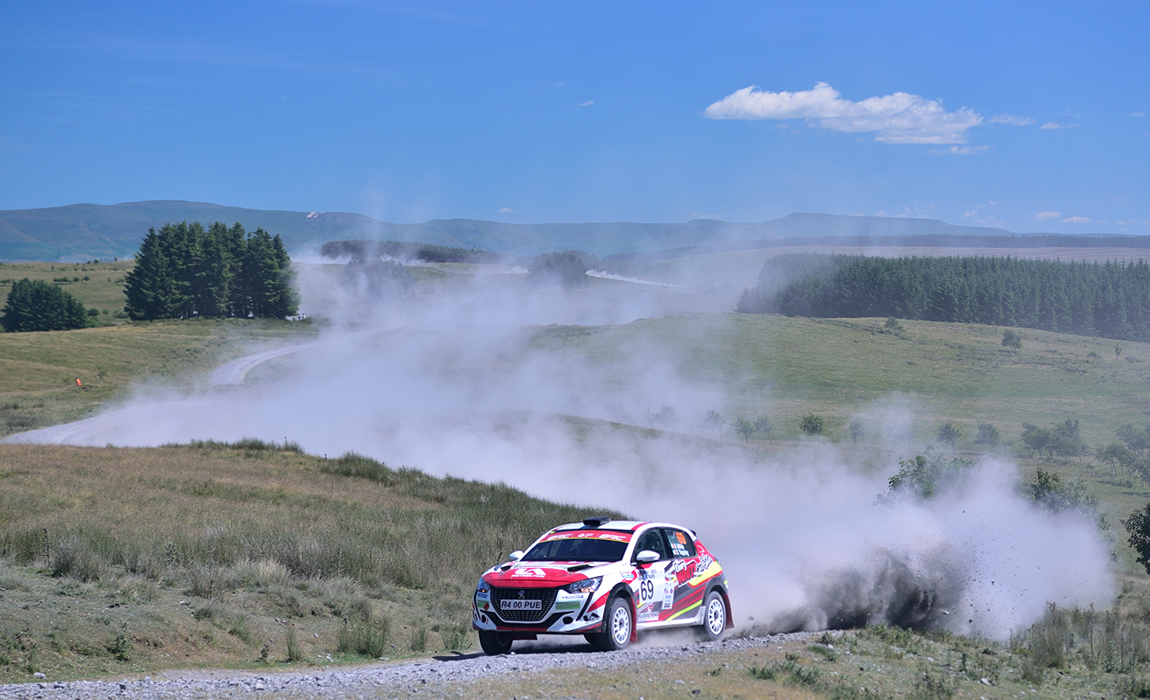 However, White would suffer from not one but two punctures in the closing stages of the rally. Disaster had stuck the Peugeot 208 Rally4, all that hard work in fighting for the lead of the rally from the off had come undone at the final hurdle.

White alongside Co-Driver Sean Topping had cruelly lost the win in the final stage of the rally and it was truly gutting for White. But one man’s loss was another’s gain; Round 2 winner Eamonn Kelly was only too happy to take up the top spot on the JBRC podium.

Pushing his Ford Fiesta Rally 4 hard throughout the day, trying to match the pace of White and at times third place man Max McRae. Kelly alongside Co-Driver Conor Mohan, who didn’t exactly have the best start to the rally would get up to speed over the afternoon’s stages. This back-to-back victory has allowed him to extend his lead at the top of JBRC standings to some 22 points over White. 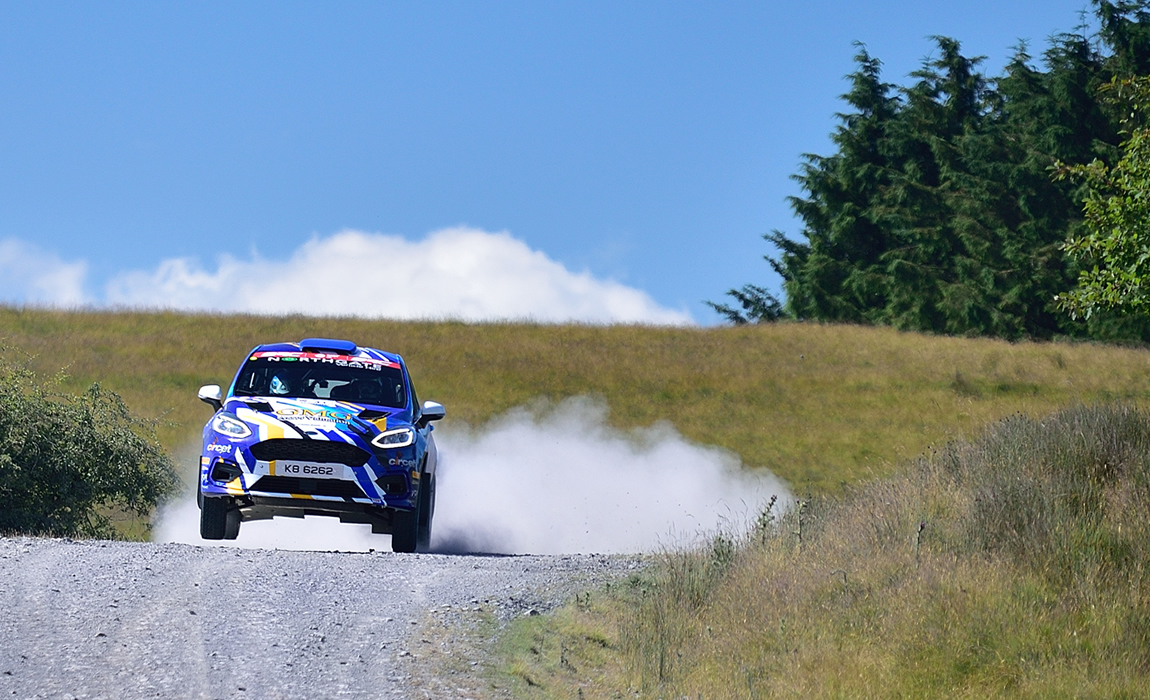 Keith Cronin still leads the standings and is 11 points ahead of Osian Pryce, with James Williams who left the Nicky Grist stages with a DNF rounding off the top three.

The British Rally Championship remains on Gravel but heads into Scotland for the Grampian Forest Rally on the 13th of August; making its second appearance in the BRC from its Banchory base to the west of Aberdeen. 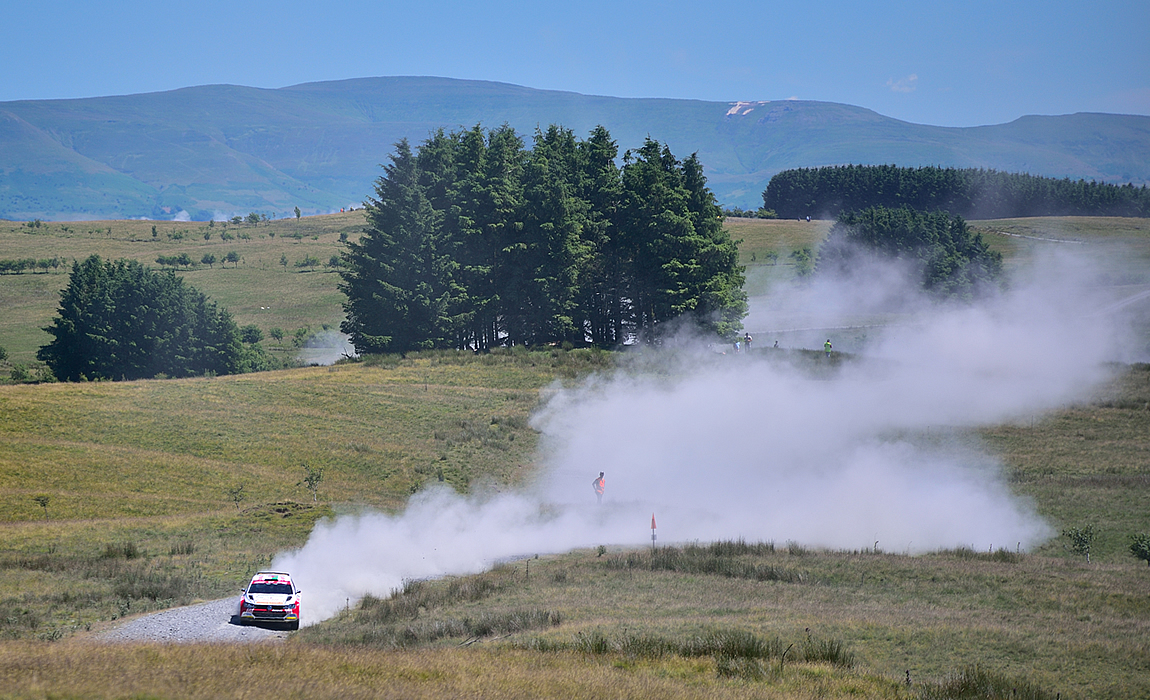