The MRF Tyres BTRDA Rally Championships remained in the North and ventured into the legendary Kielder Forest complex for the fourth round of the 2022 series. From the Northumberland market town of Hexham, 6 gravel stages (two loops of three) awaited some 86 crews who contested the rally.

Last time out on the Border Counties, Elliot Payne & Patrick Walsh became our third different winners of the series; they along with Round 1 winners Stephen Petch & Michael Wilkinson would both be looking to be the first repeat offenders of the year. Round 2 winners, Matthew Hirst & Declan Deer would not be making an appearance at this event but E.Payne and Petch would both still have to contend with the likes of Tom Llewellin, Charles Payne and Perry Gardener who would all be looking to secure their own first win of the year.

E.Payne and Walsh in their Rally2 Ford Fiesta would be the ones to set the precedence on the opening stage of the event, a little over 6-miles in the Bower Stage would see them get the better of Tom Llewellin (also in a Rally2 Fiesta) by 7 seconds. Behind them, Petch and Gardener would both stop the clocks on identical times, a further four seconds back.

The second stage in Bewshaugh, although was slightly longer encroaching on 8 miles; it like the opening test, delivered a timesheet which showed that things were tight at the top. E.Payne grabbed his second stage win by 4 seconds, meanwhile, Petch, Lllewellin, Gardener and Bob Morgan all scored identical times, whilst Charlie Payne retired from the event following an off. 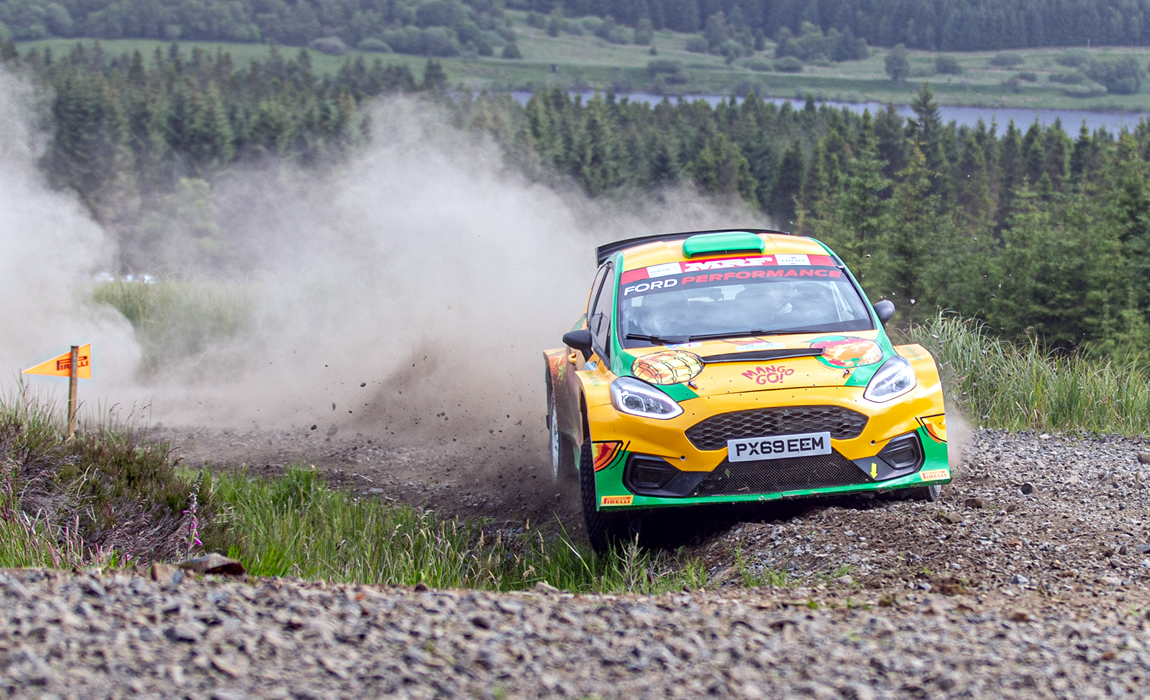 Elliot Payne compleated his morning’s efforts by securing his third stage win, compleating the loop with an 18 seconds advantage over second-placed man Perry Gardener heading into the Mid-Day service halt in Hexham. Petch rounded off the top three just two seconds from Gardener, but unfortunately, Llewellin lost time in SS3 Falstone due to “a busted brake pipe” which caused an off and subsequently dropped him down to 4th. 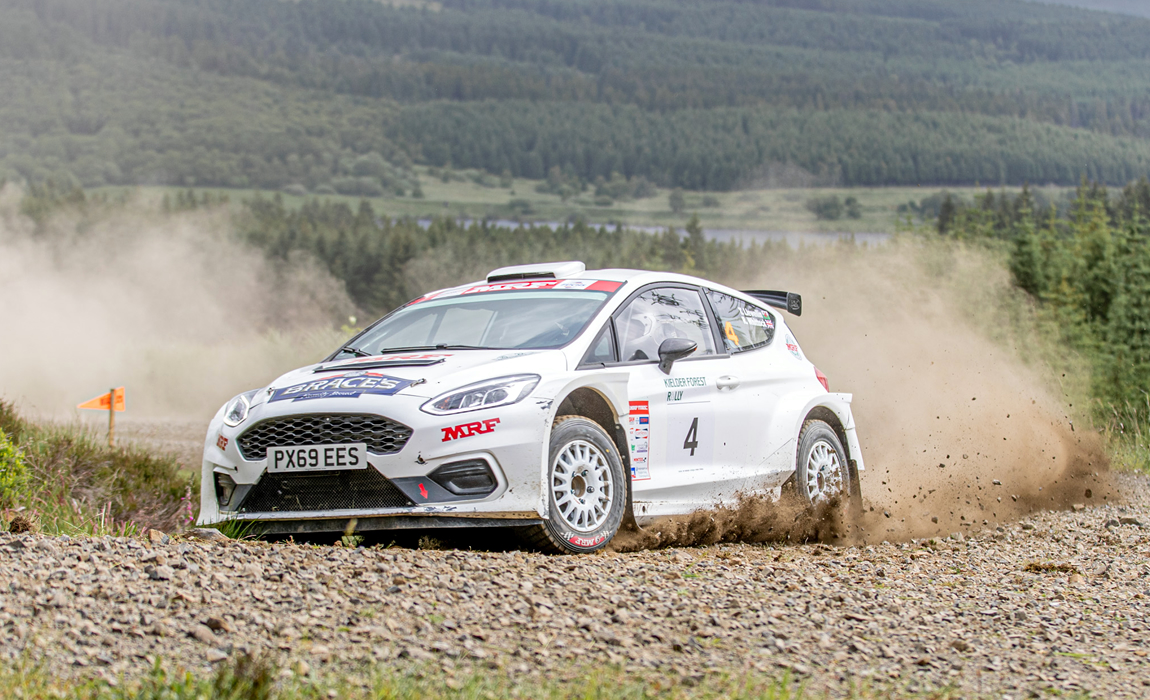 Fresh out of service with a fully functioning brake system, Llewellin was on a recovery mission to gain back that lost time and those positions from his issues in the previous stage. Snappin up his first fastest stage time in SS4 he straight-away took back third from Gardener by beating E.Payne to the stage win by 4 seconds. Not content with that, Llewellin was now on a bit of a charge and followed that up in the penultimate stage of the rally, the second pass of Bewshaugh (SS5). This left him within touching distance of Petch who was in second and with just the final test to go, it was going to be a thrilling end to the rally.

As the crew entered the final 7.5 miles of Falstone, out in front Elliot Payne had a 30-second advantage but it was all eyes on that close battle behind him, where just two seconds separated Petch and Llewellin heading into the final stage of the rally. Once again Llewellin had a storming stage, taking 9 seconds out of Petch which was more than enough to secure him second place on the podium. 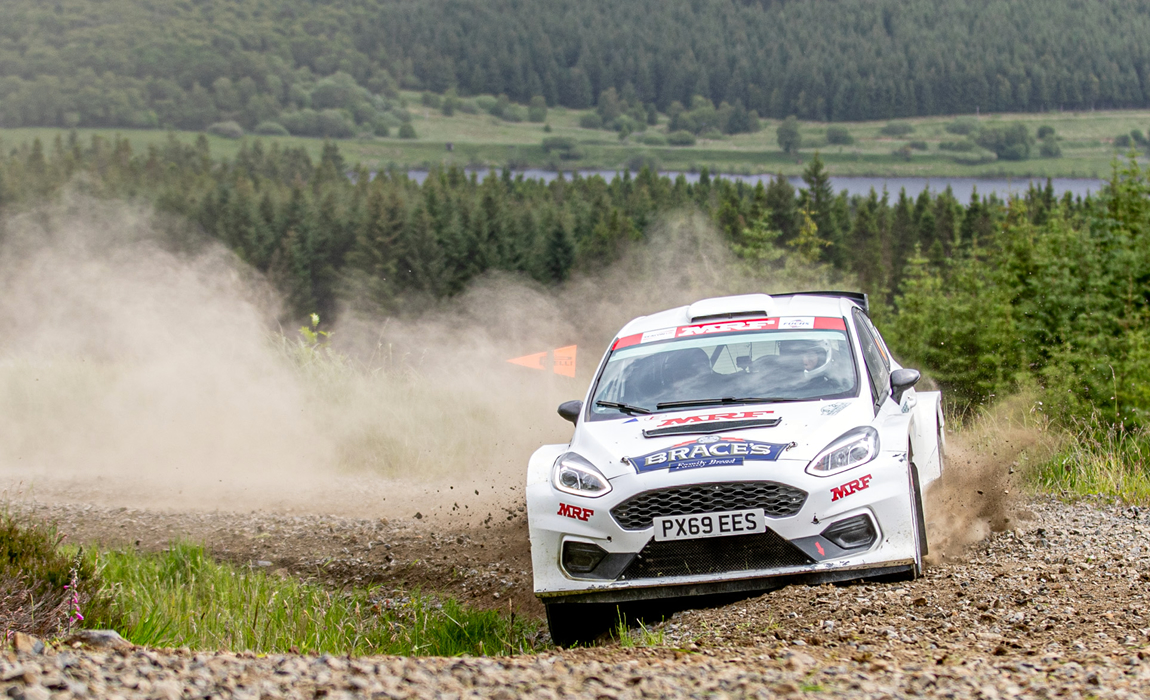 Although the rally belonged to Elliot Payne and Co-Driver Patrick Walsh for securing their second GoldStar victory in a row. Perhaps the recognition should also go in the direction of Tom Llewellin and Ross Whittock for their sterling comeback over the afternoon’s loop of stages to recover their well-deserved second place on the podium.

Payne’s victory moved him up into third in the standings ahead of Petch, but still some thirteen points behind Richard Hill who is second. But Mr Consistent, Perry Garnener now takes up the lead of the championships following his 4th finish. 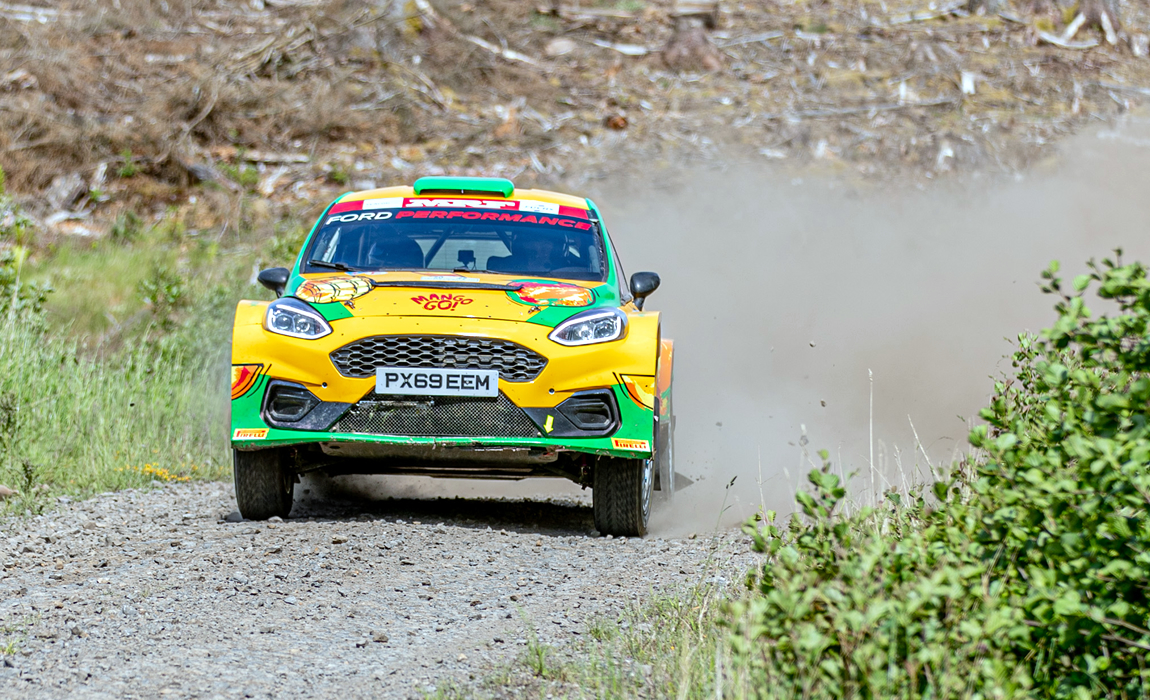 Having missed out on the last round at the Border Counties, David Crossen alongside Co-Driver Aileen Kelly returned to the SilverStar to pick up their second win of the season. Having won the season opener in the Lakes, the pair then had a somewhat disappointing Rally Nuts Stages where they retired after only two stages but they were back on song in their trusty MK2 Ford Escort on the stages of Kielder.

Despite stopping the clocks on the exact same time in SS1 as Crossen, second-placed man Andy Davison alongside Tom Murphy were not able to match the pace of the MK2 Escort of Crossen from then on. From the second stage of the event, Crossen never looked back, not only beating Davison on every stage thereafter but also mixing it up in the top 10. Crossen and Kelly crossed the finish line with well over 1 minute in hand to their closest SilverStar rivals and also secured 7th overall to boot. 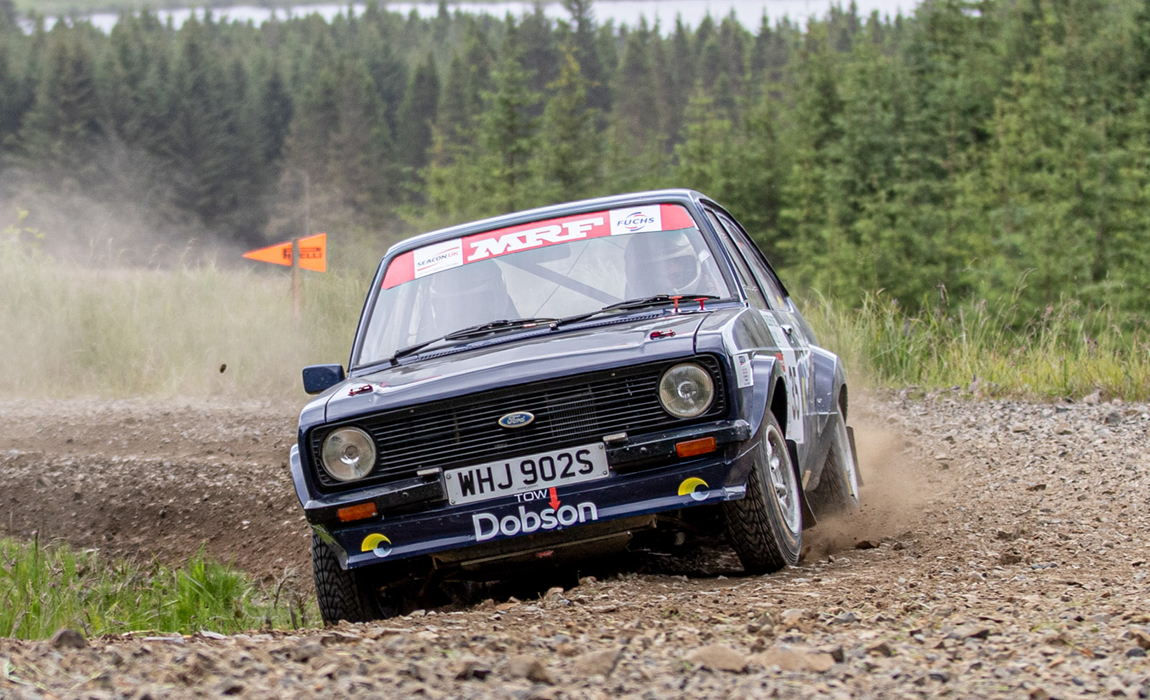 Meanwhile, in the BronzeStar award, Pete Gorst alongside Co-Driver Mark Twiname pushed their Vauxhall Nova home for their Hat-Trick of wins. Gorst was able to keep BronzeStar challengers which included Lewis Hooper in the Nissan Micra at bay all day. However, because of Hooper’s good run in the season thus far, he still leads the BronzeStar award, leading Edward James by 10 points. 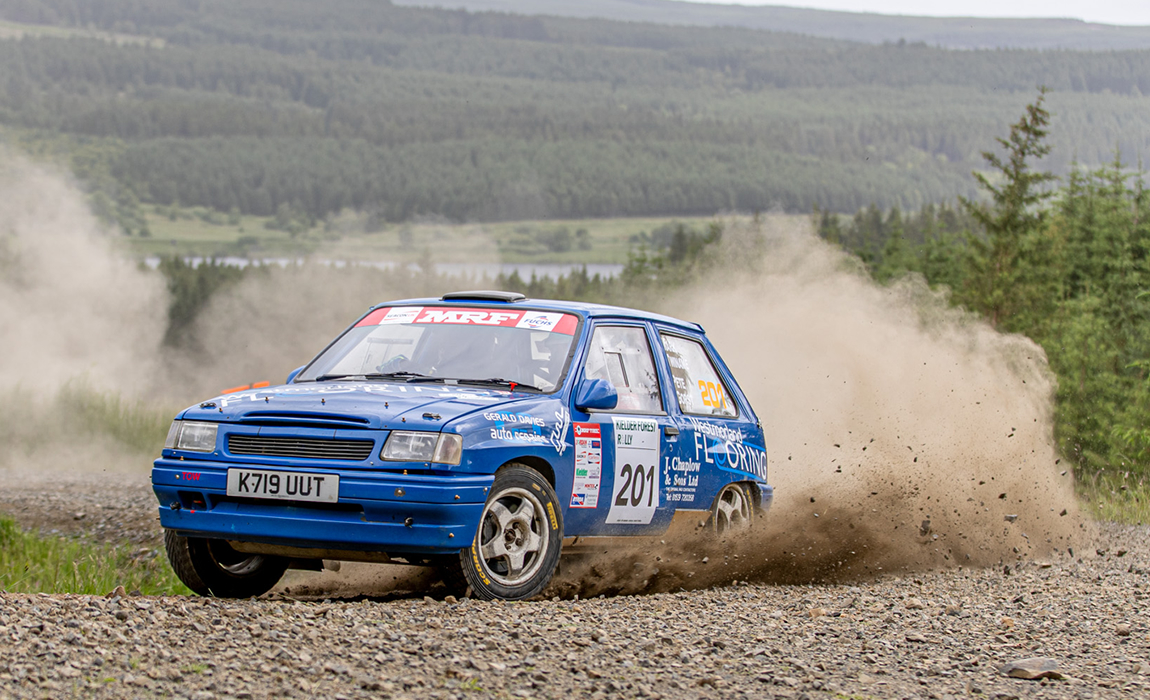 Grant Inglis continues to lead the Historic Cup standings after picking up the win in Kielder. With Gavin Chisholm calling the notes in the Ford Escort MK2, the pair held off Ernie Lee’s BMW 325i, whilst Kris Hopkins retired the Triumph TR7 after SS3, so he only pick up a single point, but remain in third on the leaderboard. 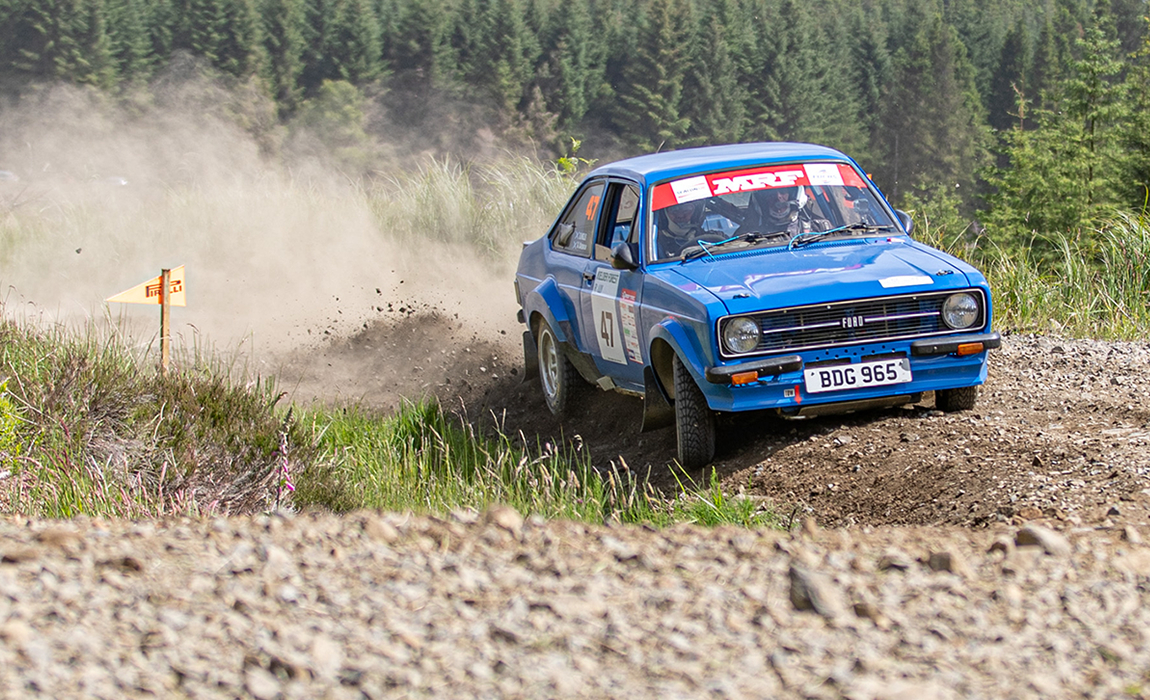 THE MRF Tyres BTRDA Rally Championship heads to Builth Wells in Wales, where stages in the Miltary ranges and surrounding Crychan and Halfway Forests will await the crews for the 5th round of the series – 9th July.