Following the unfortunate cancellation of the Plains Rally, the Event Signs Woodpecker stages hosted Round 3 of the 2021 MRF TYRES BTRDA Rally Series.

Organised by the Sixty and Worcester Motor Club, this ever-popular rally which first ran in 1983 and whose home has been Ludlow since 1988 was now in its 37th year. Whizz forward to the present day and fresh challenges were thrown the way of the organising team which required not only a rethink but a whole heap of effort to ensure that the event could even run.

Due to the stages that we all know and love just over the border in England (such as Haye Park) being out of bounds, a temporary service park at a local farm near to Kinnerton was necessary, along with all stages being run entirely in the Radnor Forest Complex, Powys, Wales

Although just 5 stages were featured on the route, the event was still able to offer up 44 competitive stage miles for the 114 competitors that entered the event.

The morning began from the southern side of Radnor Forest with a 5 miles test over Ednol Hill. Here is where Round 2 (The Scottish Rally) winner Garry Pearson in his Skoda Fabia R5 took the opening stage win; getting the better of the No1 seeded Ford Fiesta R5 of Callum Black, by some 6 seconds. 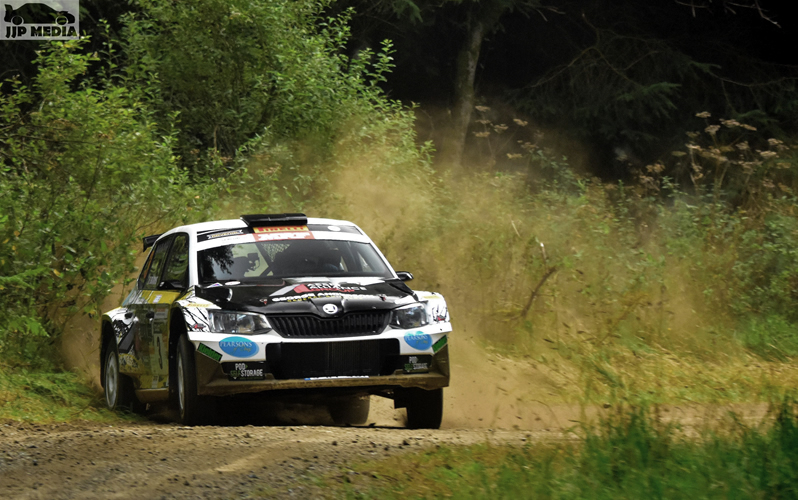 Pearson followed that up in the next stage, the longer Cwm y Gerwyn test where he was able to stretch out his early lead by taking another 14 seconds from Black. But Black was perhaps having to keep one eye on a surging George Lepley who was coming up behind him in third. 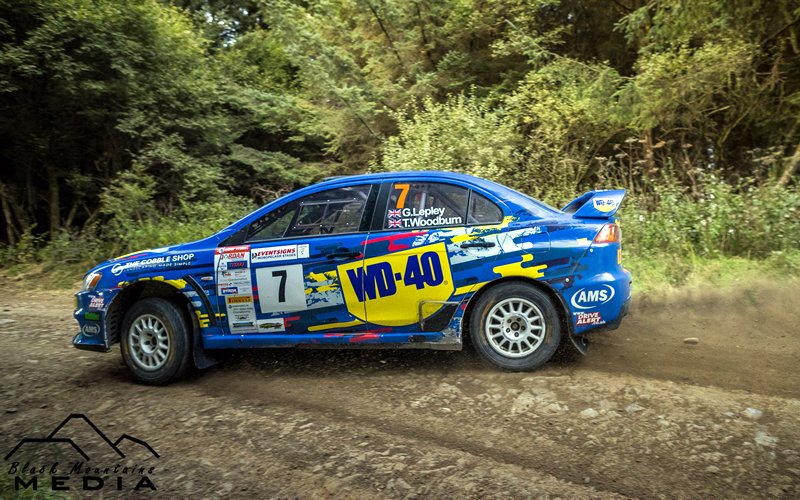 Back out after service and Pearson continued to extend his lead out front over the repeated runs over Ednol Hill and Cwm y Gerwyn, to end the morning with a sizable lead of 51 seconds but that wasn’t to be a lead over Black.

On the final stage of the morning, Black touched a log which unfortunately broke a steering arm on his Fiesta and forced him and Co-Driver Jack Morton into retirement. It was unlikely that they would have challenged the likes of Pearson for the win, but a good haul of points for second was on the cards. Instead, they leave “The Woody” with a DNF which in no way helps their title fight in the slightest. 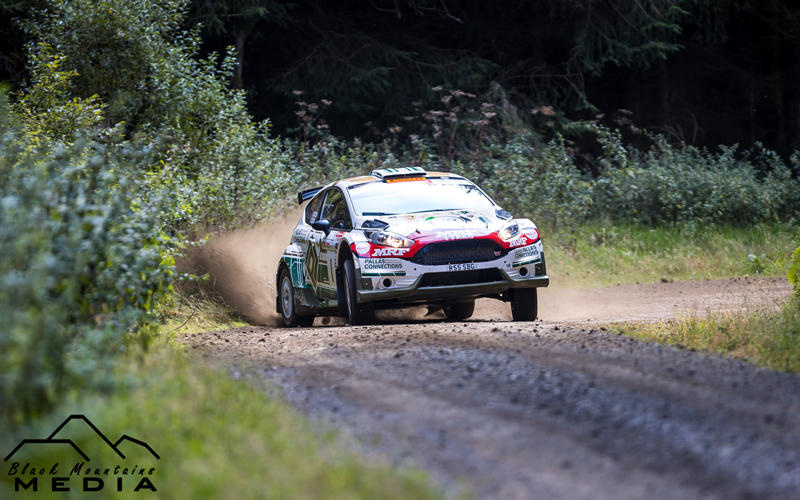 Black’s demise handed second place over to George Lepley heading into the final stage of the rally. At nearly 12 miles in length, the final test over the Stanlo Trump stage would perhaps offer up the newly promoted third man Ian Bainbridge a final chance to challenge Lepley for second but with 24 seconds to make up, it was a slim chance if that. 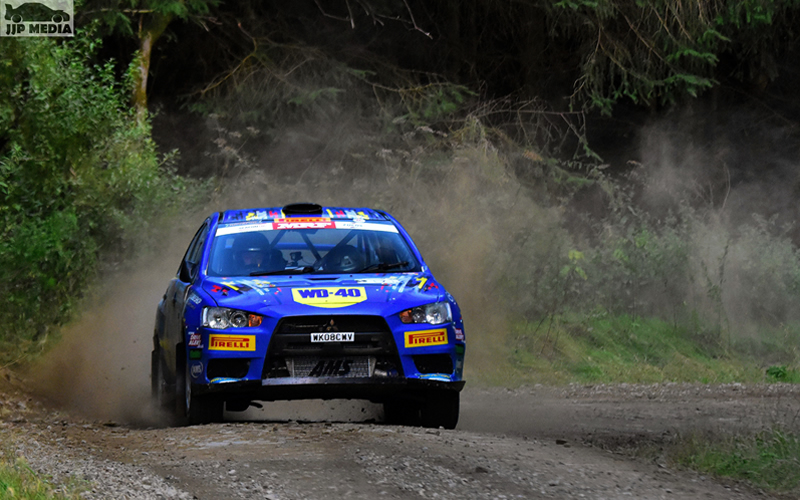 And so ending the day by rounding off his full house of stage wins to take a dominant victory on his first-ever attempt at “The Woody”, Scotsman Garry Pearson alongside Niall Burns calling the notes; brought their Skoda Fabia home with 58 seconds in hand to George Lepleys Mitsubishi Evo X. Ian Bainbridge who had a difficult start to the day, rounded off the Gold Star podium in third. 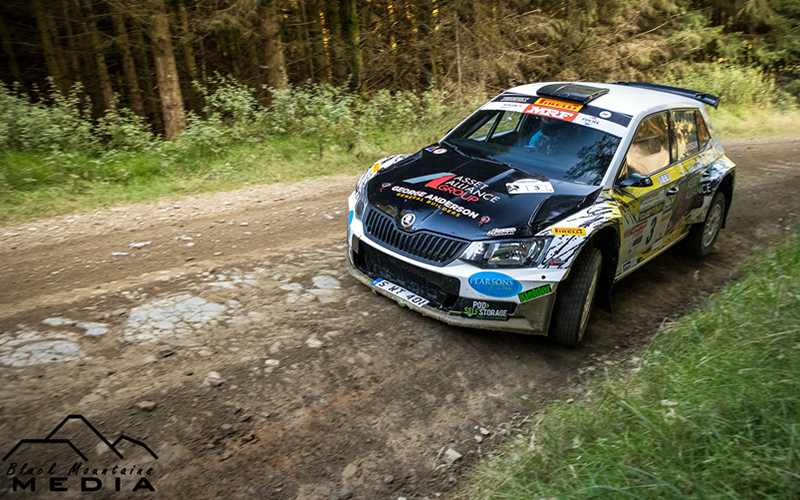 “It feels very good, I am quite surprised and absolutely delighted as well. This morning we didn’t feel fully at the races but the times were there and then this afternoon it was a case of getting through and we done it, I’m happy and over the moon.

It was a shame for Jack and Callum going out, as they were in touching distance.

They were really good stages and a credit to the organisers. I know there was a bit of repeating but the stages held up very well and some very fast sections which were very enjoyable.”

Pearson now leads the Gold Star Drivers Championship by just 1 point (85) to Elliot Payne (84), who finished in 4th place at The Woody missing out on the podium by 22 seconds.

Meanwhile, in the Silver Star award Robert Gough alongside Jonny Tad Evens brought their Mk2 Ford Escort home to take the win ahead of Ioan Llyode in the Peugeot 208 R2 car (Llyode also won the Juniors R2 Cup). Robert was also able to secure the Historic Cup win ahead of Paul Street. 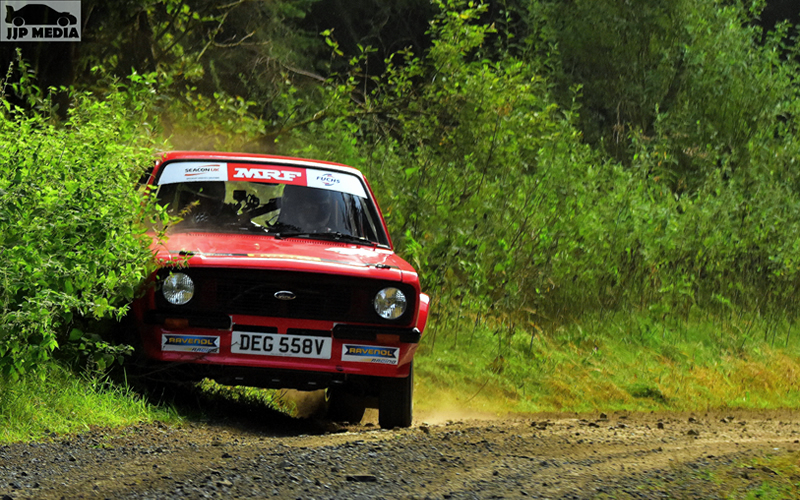 The MRF Tyres BTRDA Rally Series moves across the border into England and heads North to the legendary North Yorkshire Forests for the Track Rod Rally Yorkshire on 25th September.