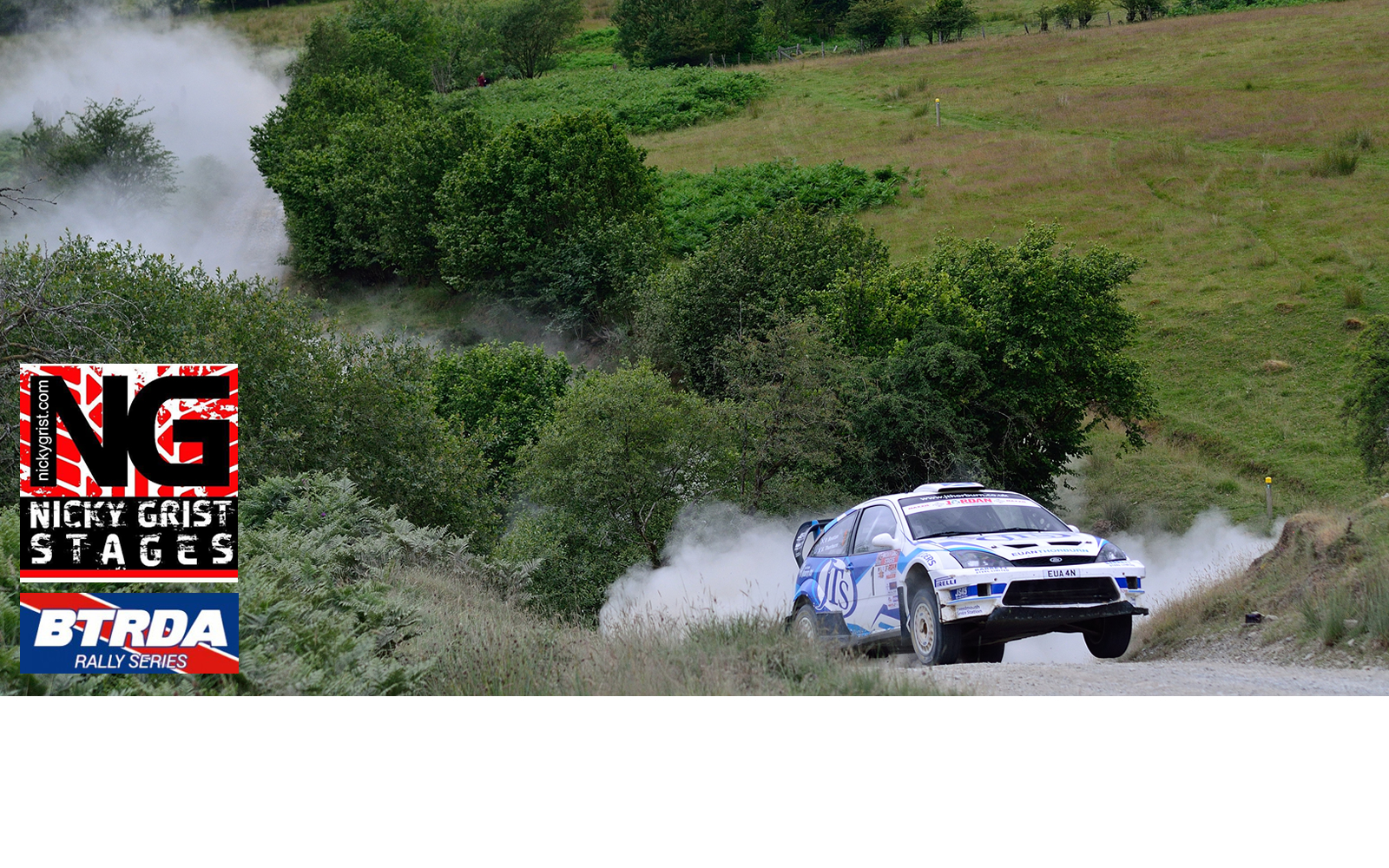 Heading into round five of the 2019 BTRDA Rally Series, Championship leaders Euan Thorburn and Co-Driver Paul Beaton were on the brink of the Championship title. All that stood in their way was 8 gravel stages in and around the Military ranges of Llandovery, Wales for the Nicky Grist Stages.

After winning all four previous rounds the pair set off from Builth Wells in their Ford Focus WRC knowing that their season could be all wrapped up by the end of the day. They led the 127 strong field into the opening stage in Crychan Forest taking five seconds out of Stephen Petch on the first 8.7 mile test indicating that they meant business from the very off.

Petch, in the WD40 sponsored Ford Fiesta WRC, responded to Thorburn in the next stage through the neighbouring Halfway Forest by clawing back 3 seconds over the very short 3.6 miles stage, whilst Irishman Brendan Cumiskey, also in a Fiesta WRC, moved up into third overall.

Moving north into the Monument stage, Thorburn was once again back to his stage winning ways, this time beating Petch by a sizable 14 seconds, which he then followed up in the final stage of the morning to extend his overall lead to 21 seconds before service.

In the SilverStar, Andy Davison in the Talbot Sunbeam and Jason Pritchard in his MK2 Ford Escort, both kicked off the day with identical times on the opening Crychan stage.

Davison got the better of Prichard in both SS2Halfway and SS3 Monument to take the SilverStar lead, whilst George Lepley in the BRM Avenger who was looking to secure both the SilverStar and Historic titles on the event closed the gap to Pritchard in third.

In the final stage of the mornings loop Pritchard dropped a number positions, leaving Lepley to take up position in second whilst Davison extended his lead before the mid day service.

The Bronze Star 1400’s battle resumed between the likes of Callum Black, Chris Powel and Steve Black. Callum opened up the day in his MG ZR with a small 3 second lead in SS1 Crychan over the Sunbeam of Powell which he then extended in SS2 Halfway. However, in the third stage of the event, Monument, Callumdropped a number of positions due to fuel pressure problems, handing the lead to Powell.

Powell added a second stage win on SS4 Llyn Login, the final stage of the mornings loop, to lead the 1400’s Bronze Star charge ahead of Steve Black in the Suzuki Swift at the mid day service.

Back out after service and Thorburn was setting himself up for a final push in his quest for victory by opening up the afternoon with a repeated stage win in Crychan Forest. Cumiskey reduced the gap to second place Petch by getting the better of him in this first stage of the afternoon, but Petch clawed that back in the second run through the following Halfway Forest stage.

In the final two stages of the event, Thorburn powered his way home to the rally win by a little over a minute, not only making it a clean sweep of five out of five rally wins but also taking the 2019 BTRDA Championships victory.

“The win on the Nicky Grist Stages was enough to clinch the title of the BTRDA Rally Championship after 5 wins from the first 5 rounds! Massive thank you to everyone for all your support! To the team and to Paul on the notes”

Thorburn and Beaton’s dominant performance in the BTRDA Rally series this year has been nothing short of impressive and to do it with two events still remaining on the calendar really shows the rest of the field up. Time will only tell if the Scotsman will return in 2020 to defend and if the rest will up their game.

As the SilverStar battle continued to rage on throughout the afternoon’s loop of stages Andy Davison was pushed all the way in order to stay ahead of Jason Pritchard and George Lepley. Davision managed to keep them both at bay to take the SilverStar win finishing 14th overall, 18 seconds ahead of Pritchard and Co-Driver Steve McPhee, who pipped Lepley by just 4 seconds for 2nd and 1st in the Historics.

Finishing 16th overall and third in the Silverstar on this event was just fine and dandy for Lepley because it was enough to not only secure him the 2019 BTRDA SilverStar Championship title but the Historic, Junior and English Championship titles to boot. What a season it has been for the rising young rally star, an impressive drive on every event this year, so where next for this young talent?

“Well that was fun, borrowed the Avenger for the Cambrian and kept it until she won the championship. It’s a car that keeps on giving, she has been fantastic … rev’s like a BDA on steroids, flies like a bird, and entertains like a comedian, but who’s laughing at her now…she is the 2019 BTRDA Silverstar and Historic Champion. She’s beat all the modern R2 cars, & modern high power RWD cars, as well as some of the very best Historic Escort BDG’s and drivers in the country! She is a star!”

Following on from his morning’s efforts Chris Powell never looked back, winning every stage of the afternoon’s loop in his plucky little Talbot Sunbeam. Finishing 28th overall, he landed the Bronze Star and top 1400 award ahead of the Suzuki Swift of Steve Black who finished 39th OA.

Despite not having the best of day out on the stages in the troublesome MG ZR, Callum Black manage to salvage the third spot on the podium to score a reasonable points haul to put towards his bigger goal. He now takes his Championship fight to the next round where a win on the Woodpecker could see him secure the Bronze Star 1400’s Championship title.

And so some of the 2019 titles have already been engraved onto the trophies but for others the fight continues on at the next round. The Woodpecker stages at the end of August, with familiar stages on the English-Welsh border,will once again return to the Ludlow based event for Round 6.