The FIA European Rally Championship remained in Portugal but moved to Fafe close to Porto on the mainland for Round 6 of the 2021 season. Whilst previously the Rally Serras de Fafe e Felgueiras has run as an Asphalt event, this year for the first time in its history it moves onto the gravel. 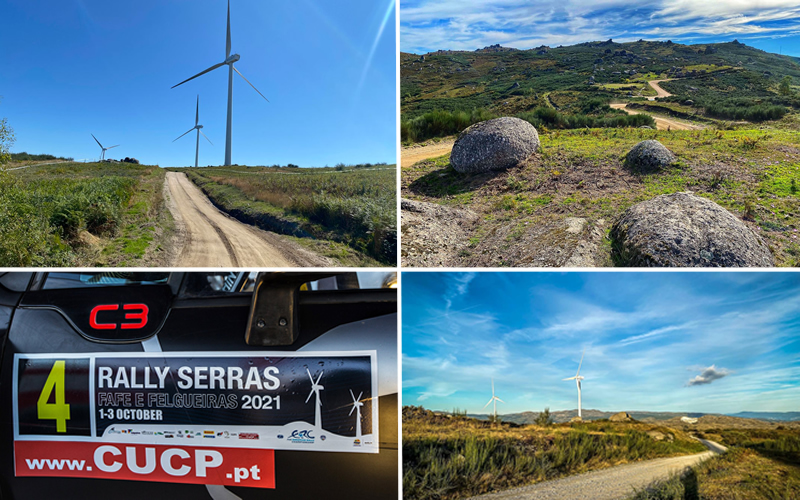 After his win, last time out on the Azores Rally, Norwegian Andreas Mikkelsen arrived in Fafe leading the Championships. With 16 Stages covering 197 km, some of which are used on the World Rally Championships, Mikkelsen and Spaniard Dani Sordo who returned for his second outing in the MRF Tyres Hyundai i20 R5 were to be the favourites. 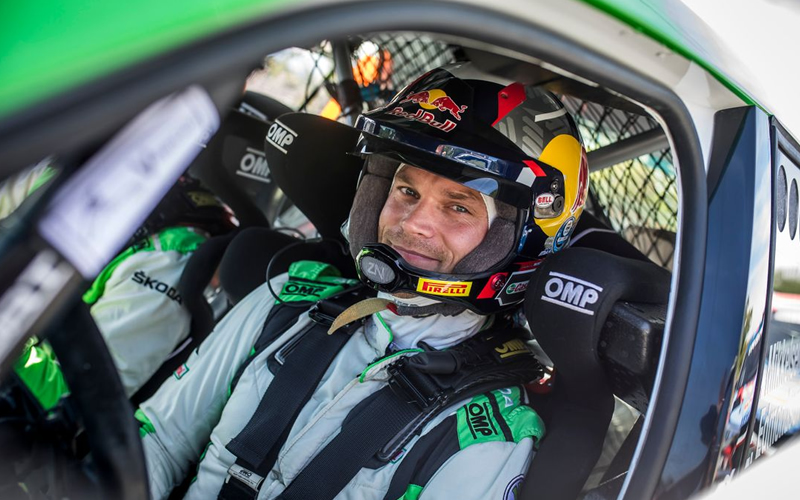 The opening leg of the rally featured 4 stages to be repeated in the afternoon but the weather was looking rather unsettled. With Damp Foggy conditions out on the morning stages, the battle between Mikkelsen and Sordo got straight underway. It was Mikkelsen who began the day with the opening 12km Luílhas stage win, stopping the clock 1.6 seconds faster than Romanian Simone Tempestini. 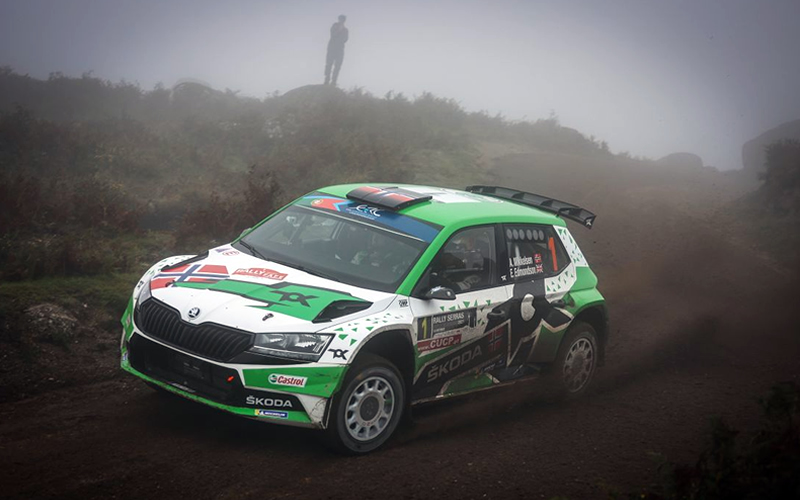 Sordo got up to speed in the next stage getting the better of Mikkelsen by some 5.6 seconds for which he followed up again in SS3 Agra – Zebral 1 to take the early lead. However, on the final stage of the morning loop SS4 Boticas, Mikkelsen was struck with a puncture which cost him some 30-seconds. 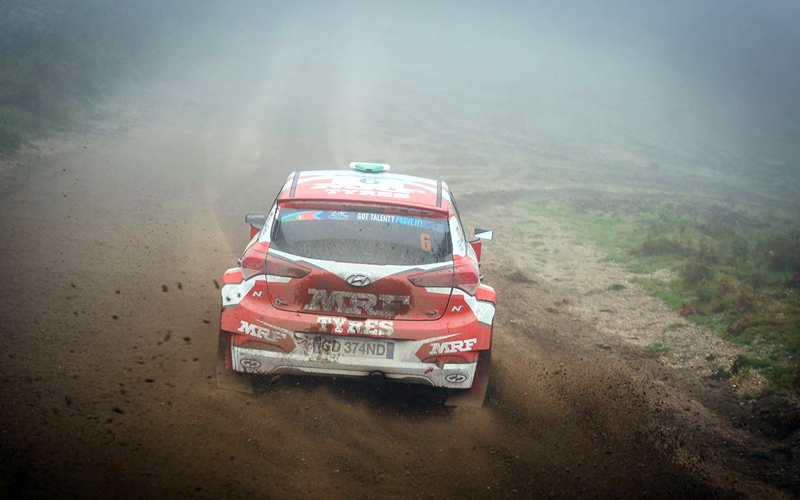 Elsewhere last years Champ Alexey Lukyanuk who has had two DNF’s recently heading into the event had struggled with Citroën C3 Rally2 Car all morning. With his lack of knowledge of the stages compared to Sordo and Mikkelsen, he was a little off their pace. 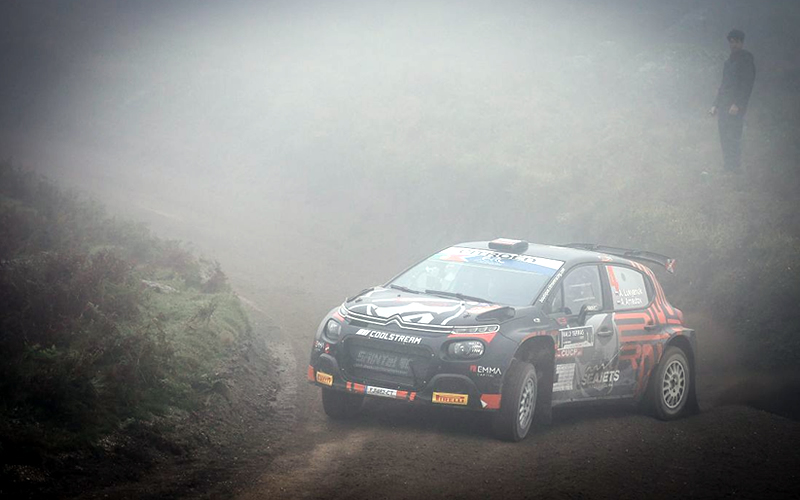 Sordo headed into the midday service halt with a whopping 28.8 second lead to Mikkelsen. 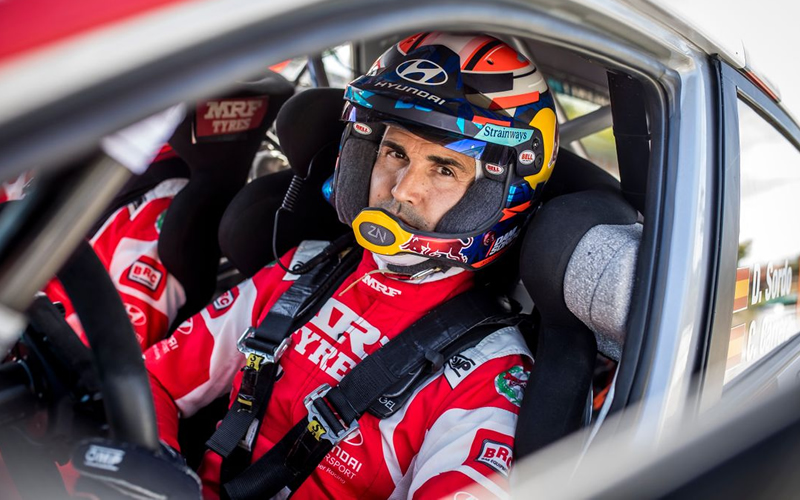 “The morning was quite ok.. This afternoon will be tricky with the fog and mud… It will be demanding”.

In the repeated loop Dani Sordos day went from A-OK to a complete disaster. First, he picked up a puncture on the first stage of the loop which dropped him down to 2nd and then he lost second to Lukyanuk who won the next stage. 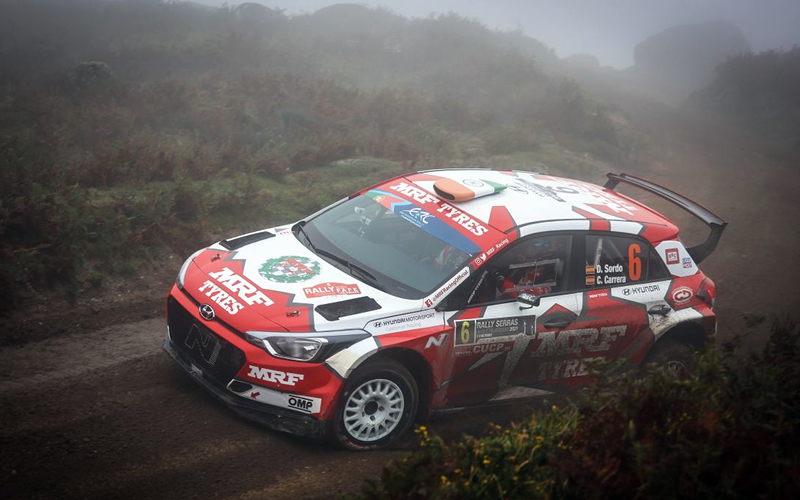 But on the final stage of the day, SS8 the repeat of Boticas, something broke on the steering of his Hyundai i20, he went off near the end of the stage and was out of contention. 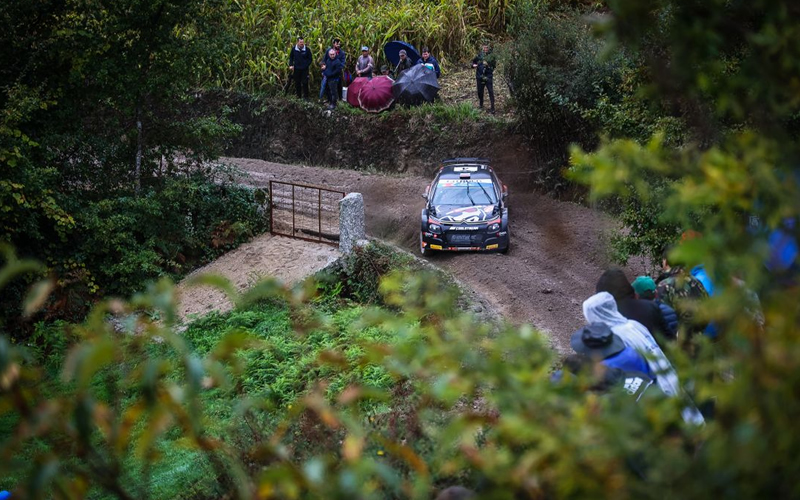 Lukyanuk punctured on this stage but at least he was still going and with half a chance which was more than could be said for Sordo who had retired for the day. Mikkelsen ended the day with a 4.4 second lead to Lukyanuk at end of leg1. 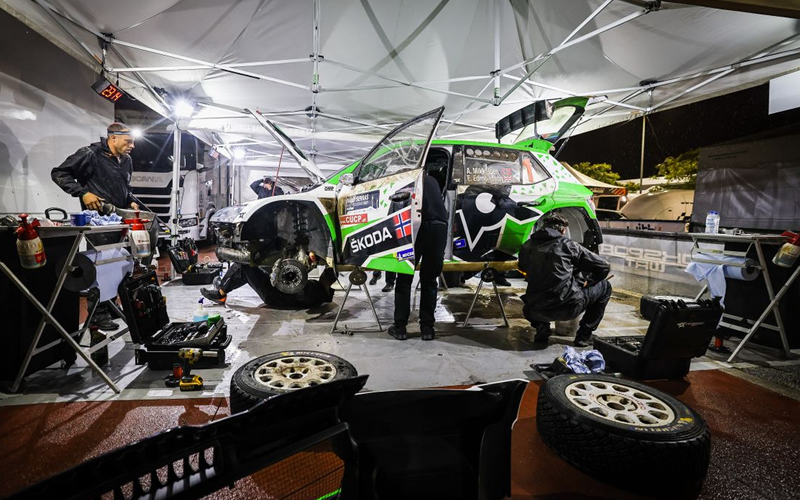 The second leg of the rally featured a further four stages to be repeated in the afternoon and included the legendary Fafe Jump, the weather had also improved overnight. 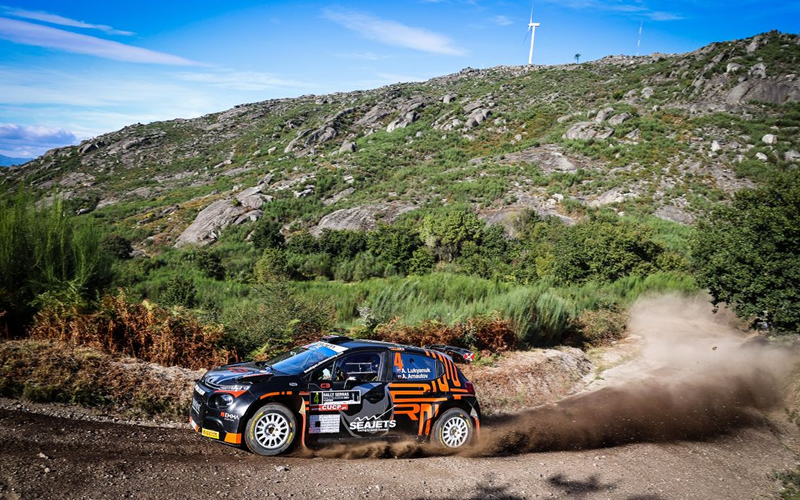 Sordo restarted for the day and Lukyanuk pushed on but Mikkelsen with his good experience of the stages from his WRC outings was no match for the Russain. Over the course of the morning, Mikkelsen increased his lead by winning three out of the four stages and headed into the midday service with a 9.3-second lead. 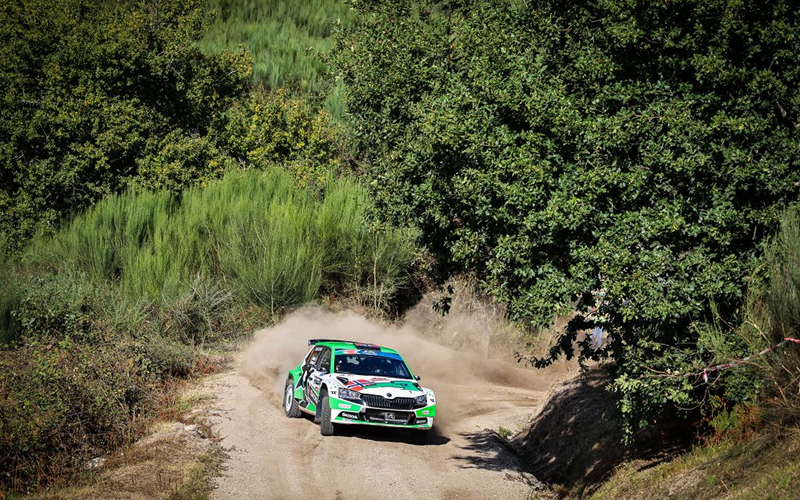 Over the final loop of 4 stages, the battle for 3rd between two local Portuguese drivers Bruno Magalhães and Armindo Araújo raged on. Araújo who had risen to 3rd on the previous afternoon of the rally was able to fend off Magalhães to take the third spot on the podium, and the Portuguese National Championship win. 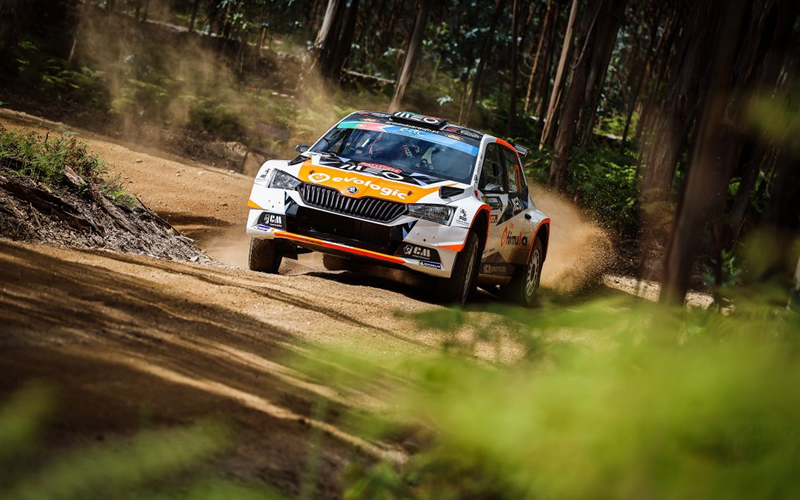 Alexy Lukaynuk ran into issues on SS13, the first stage of the afternoon loop, front driveshaft failure severely hampered the Russain but fortunately, he had enough time in hand to nurse the Citroën C3 rally 2 back to the finish second. 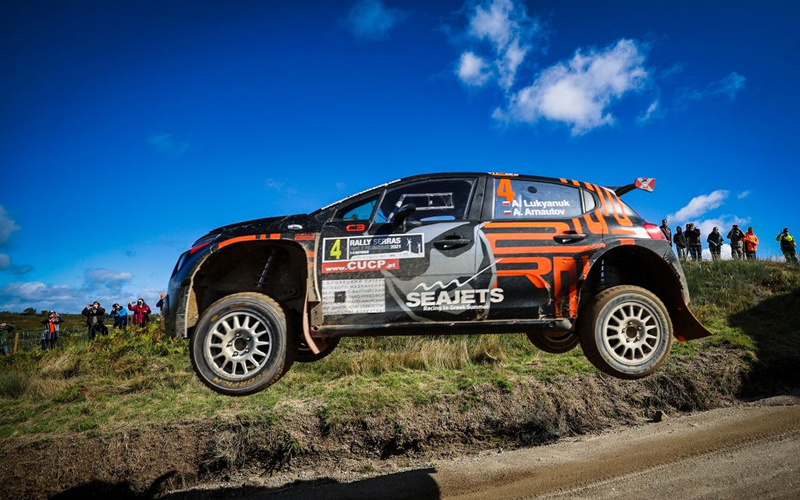 “Today It was a very big upset, but we finally managed to keep our position… So it’s not so bad.

After seeing off a battle with Sordo on the first day and then Lukyanuk on the second day; Norwegian Andreas Mikkelsen in the TokSport Skoda Fabia Rally2 Evo took the victory with a healthy 2min gap. 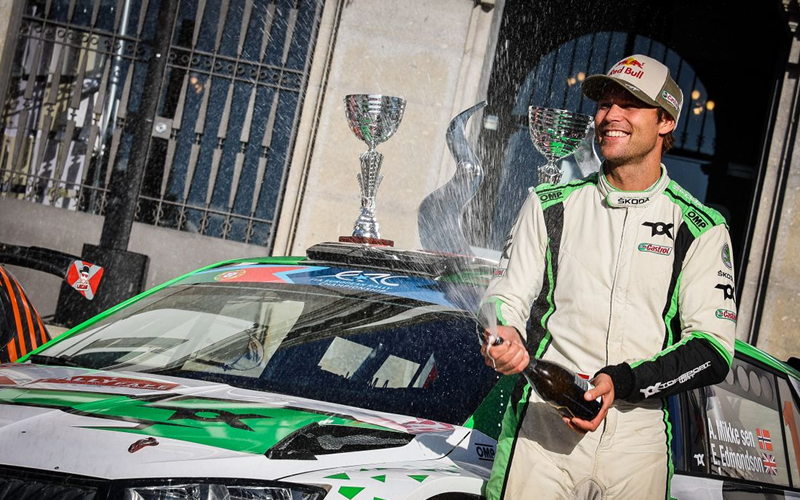 “Very happy with this weekend, It’s been really difficult conditions especially yesterday with the rain and mud. Elliott did an amazing job and the team prepared an amazing car, the car was so reliable all weekend…. It was a pleasure to drive…. I really enjoyed the weekend.”

Mikkelsen remains on course for the title and leads the Championship by 71 points (176) to Marczyk (105) who moves up into second. Next up Rally Hungary 22-24th Oct and its a return to the tarmac.