The second full day of the Safari Rally Kenya, for the majority of, produced far less drama compared to that of the previous action-packed day. With 132km spread over a further 6 stages on the tracks further north around Lake Elmenteita; what promised to be a much tougher day, was instead far more conservative. 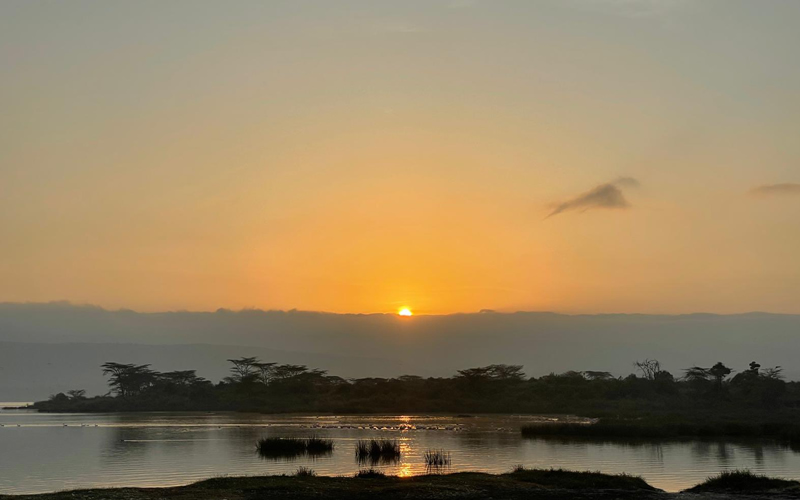 Whilst the world on social media was banging on about Zebra Crossings, overnight rally leader Thierry Neuville set about extending his lead by 10 seconds over Takamoto Katsuta on the morning’s loop of stages.

In front of a vast flock of Flamingoes, Neuville won the opening 14km stage of the day, SS8 Elmenteita; he was focused on a drama-free morning, maintaining his rally lead. 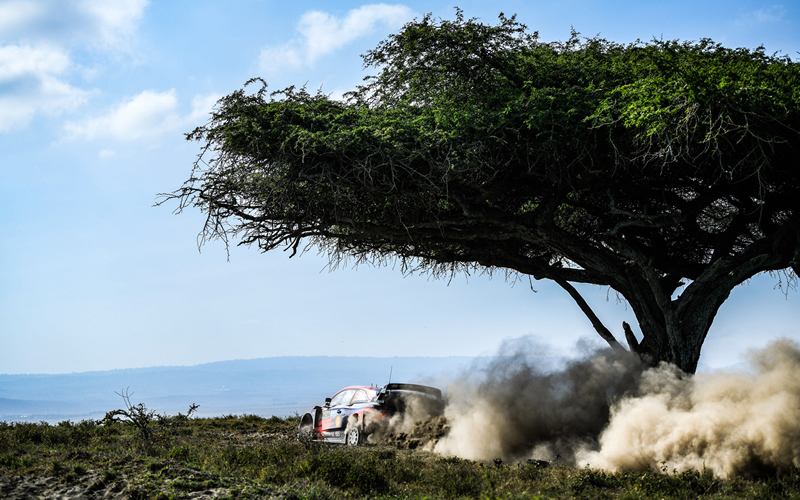 Stage 9 Soysambu had ample wildlife which at times got a little too close to the action, but this did not distract Sébastien Ogier who won both this and the following longer 31km Sleeping Lion stage. Despite these two stage wins, Ogier was still some 37 seconds away from the third podium place which Ott Tänak held. 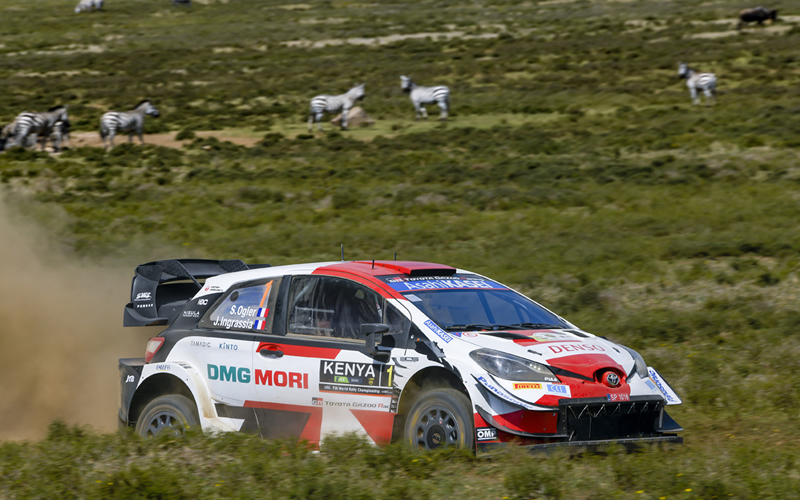 “It’s not a huge push, but we have to keep some pressure as much as we can do. The gaps are big, so there’s nothing you can really catch in a normal fight, but it’s Safari and so many things can happen”

For the repeated afternoon loop, it appeared that the stages had held up well since the morning pass over them. Despite some determined Zebras on SS11, Neuville maintained his overall lead; as he pulled up to the stop line of the lakeside stage he was showing a little frustration at the Zebra, which once again caused him to brake on the long fast section of the stage. 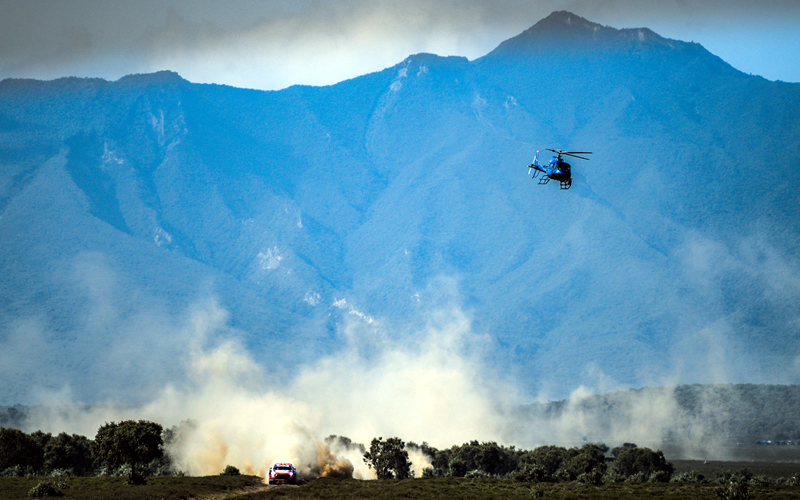 “I had a nice clean stage, but I had to brake in the longest straight of the stage to avoid the zebra in the middle of the road. Other than that, it was a nice clean run.”

Behind Neuville, the gap between Katsuta in second and Tänak in third was slowly being closed up. Ott Tänak was keeping the pressure on the young Japanese driver and had finally won his first stage of the event on the Soysambu test.

“The first objective is to finish the day, but of course we want to keep the pressure.”

The whole day had been lacking in the drama like the opening leg of the rally had produced, and then in the final stage of the day, the second Sleeping Warrior test, Toto blessed the rain down on the African plans and this caused havoc. 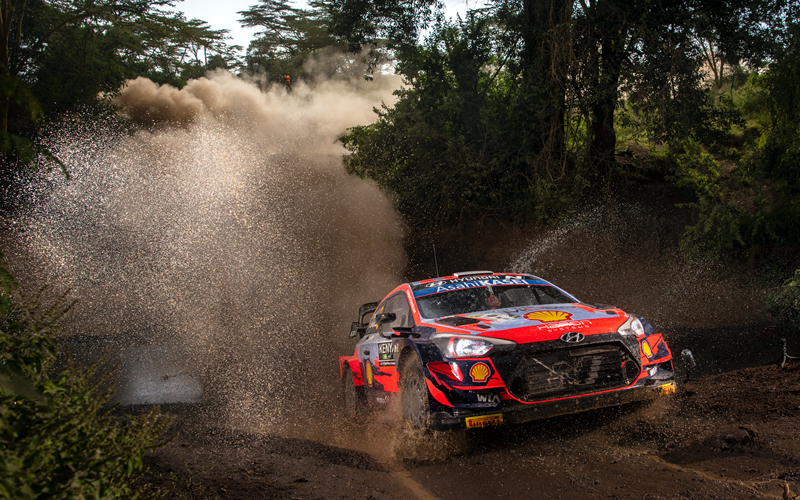 The rain-soaked roads turned into what is locally referred to as “Black Cotton” causing cars to slide off the tracks. Tänak had to stop when his windscreen heater failed, causing his screen to completely mist up. The Estonian lost nearly two minutes to the first group of cars who manage to finish the stage before the rain arrived, he was once again not happy; and quite rightly so, these are big bucks state of the art cars and they (Hyundai) can’t even ensure a windscreen heater functions!

“My side of the screen was not working. I couldn’t see. It’s amazing – the quality is amazing.”

In this eventful conclusion to the day, Tänak had lost third to Ogier, Ogier was now within 18 seconds of second place Katsuta and in striking distance for the final day. Rally leader Neuville pushed on though the stage as much as he could and managed to extend his lead considerably to end the day over 57 seconds ahead of Katsuta. 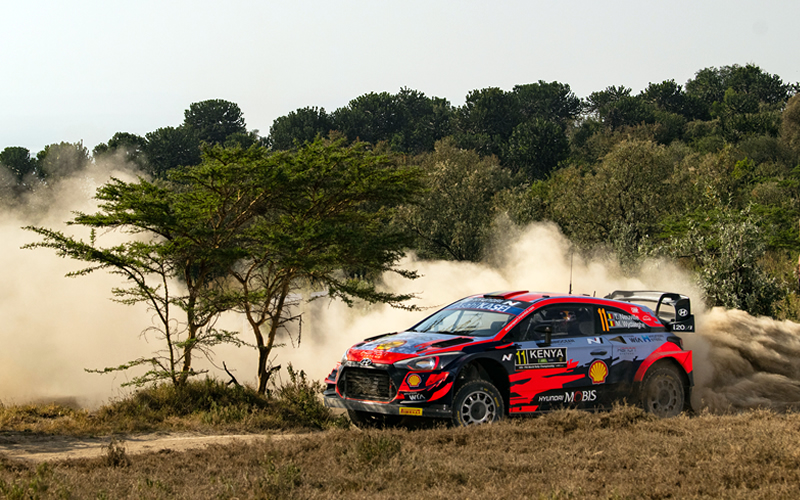 “I took quite some risks to try to keep on because I knew Ogier was 12min in front [on the road]. He had probably a much drier road than us, but I kept pushing to not lose any time. I am really satisfied we are here.”

The rally heads into its final day which features 5 stages covering approximately 54km. In a normal rally, Neuville’s significant lead would be enough to cruise to the victory; but this is The Safari Rally and as we have already seen, anything can happen. Ogier is within reaching distance of taking second place from his team-mate Katsuta. If he doesn’t overhaul him by the time they reach the power stage, could team-order come into play?