The third day of the Rallye of Monte Carlo resumed on Saturday morning in the Alpes-de-Haute-Provence and featured 5 stages covering 92km; the second full day of action would once again go without a mid-day service opportunity. With the shortened Sisteron Stage (Saint-Geniez – Thoard) billed as the one to watch, this stage delivered ample drama on its first run alone.

As the sun came up, the temperature was around -8 degrees and the action began with a single pass over the 16.8km Le Fugeret – Thorame-Haute test (SS9), a stage that was last used in the WRC back in 1997 in the opposite direction.

It was a good start to the day by the trio of Toyota Gazoo Racing GR Yaris’s, Elfyn Evans who was laying in 3rd overall grabbed his first stage win of the rally and indeed the season. Taking a time that was just 0.7s faster than his team-mate, Kalle Rovanperä, the Welshman had reduced the gap to Sébastien Ogier ever so slightly. Ogier in turn took a thin slice out of the overnight rally leader, Sébastien Loeb.

In the Hyundai camp, there was no real change for Theirry Neuville whose comments at the stop line were pretty much a cut n paste of the previous day:

“It’s a bit like yesterday morning, I can’t drive fast. It’s impossible. I get a lot of slip and understeer”

At least Neuville wasn’t in Ott Tänak i20, the Estonian hadn’t picked up a puncture already on the morning’s opener. Both of the leading Hyundais had opted to carry just a single spare tyre for the morning loop of stages. With another two stages still to tackle, this gamble had left Tänak in an unforgiving situation following that puncture which cost him a chunk of time. 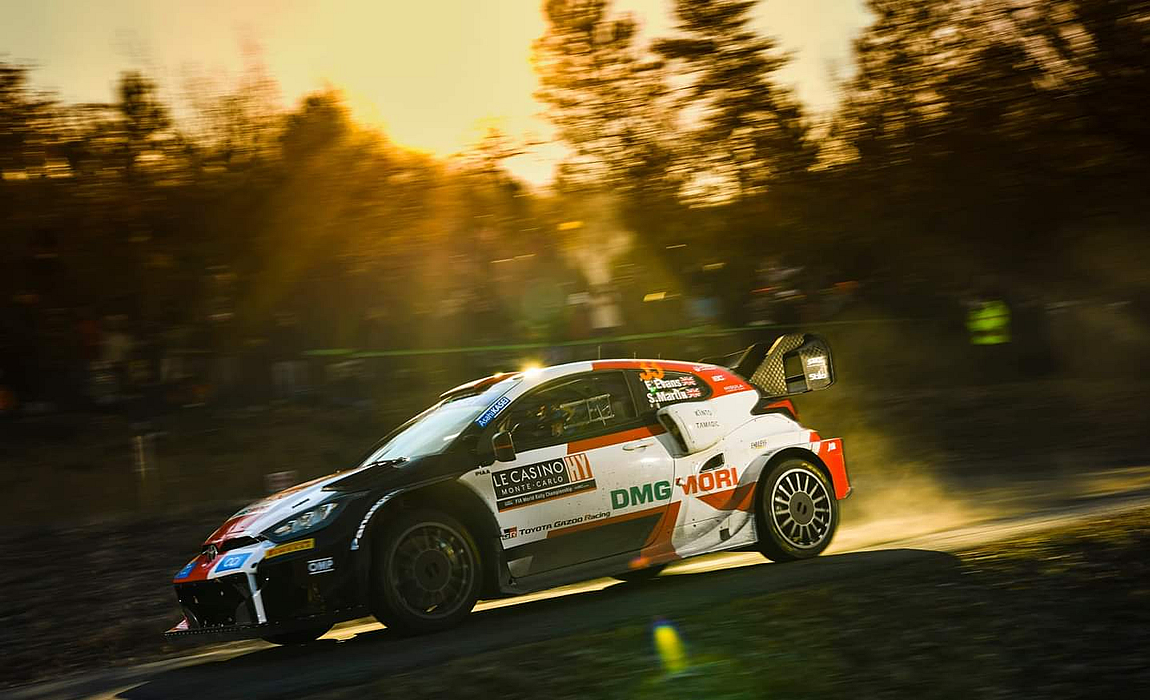 The problems for Hyundai would escalate in the second stage of the morning (SS10 – Saint-Jeannet – Malijai). First up young Oliver Solberg went off the road and lost a huge amount of time getting back onto the stage. Then upon the arrival of Thierry Neuville at the stop line, the Belgian delivered a big statement:

“We are fighting with some issues and now something has broken in the stage. The car is driving to one side and it’s over.” 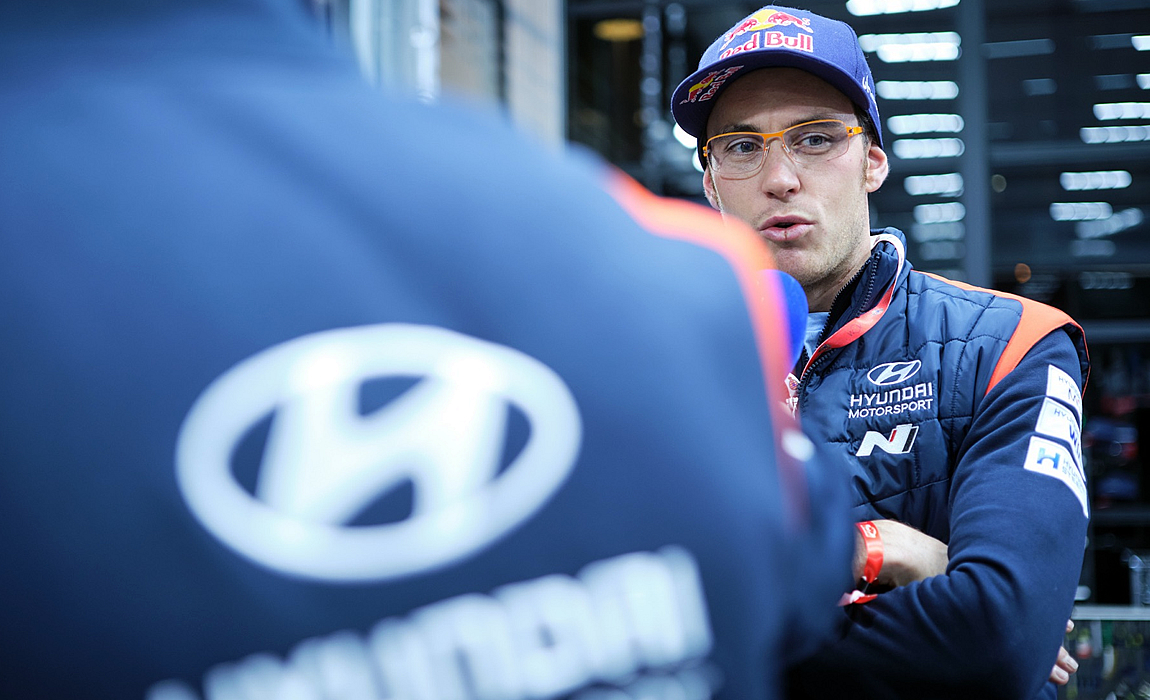 In Stage 11 (Saint-Geniez – Thoard), the gamble of tyre choice would come into play. 70% of the stage was dry, but it was the remaining 30% of the stage that climbed up the Col de Frontbelle which consisted of snow, slush and black ice which required a tentative approach. This Sisteron stage was more like the classic Monte tests for which the fans yearn for, however, these conditions in the stage were unique on this year’s Monte and was not representative of the whole rally.

The leading Hyundais of Neuville and Tänak were the only two not to take any winter tyres of any sort, and Tänak was the first to pay the price for that choice. With a spin on a hairpin up in the Col and then a huge moment where he nearly dropped his i20 off the road. The Estonian had escaped crashing out then and there but instead, had an altercation with the rock face on the opposite side of the road. That impact caused not only another puncture (his second) but damaged the radiator and he was left cruising out of stage with a windscreen covered in an oily fluid substance. That impact would ultimately only lead to one outcome…. a DNF to begin the year with.

Elfyn Evans with two crossed studded tyres on his Yaris GR appeared the most committed up the winter section of the Col, but perhaps was a little too committed on the proceeding dryer section. At 14km in, he clipped the inside bank and went off the road. The Yaris was perched precariously on a steep bank above the lower road section of the stage, which caused a red flag after Loeb had passed the scene.

As Ogier reached the wintery section of the stage, he went a little wide and was so close to having an off himself but survived the stage to take the win. Crucially he was some 5.4 seconds faster than rival Loeb to take the lead of the rally. Evans’s off had promoted M-Sport Fords’ Craig Breen, who has been making steady progress in his Puma up to third now.

“It’s never easy to go through this stage. It’s just about surviving, but we are here. Unfortunately, Elfyn is out on the corner – it’s a shame for the team.” 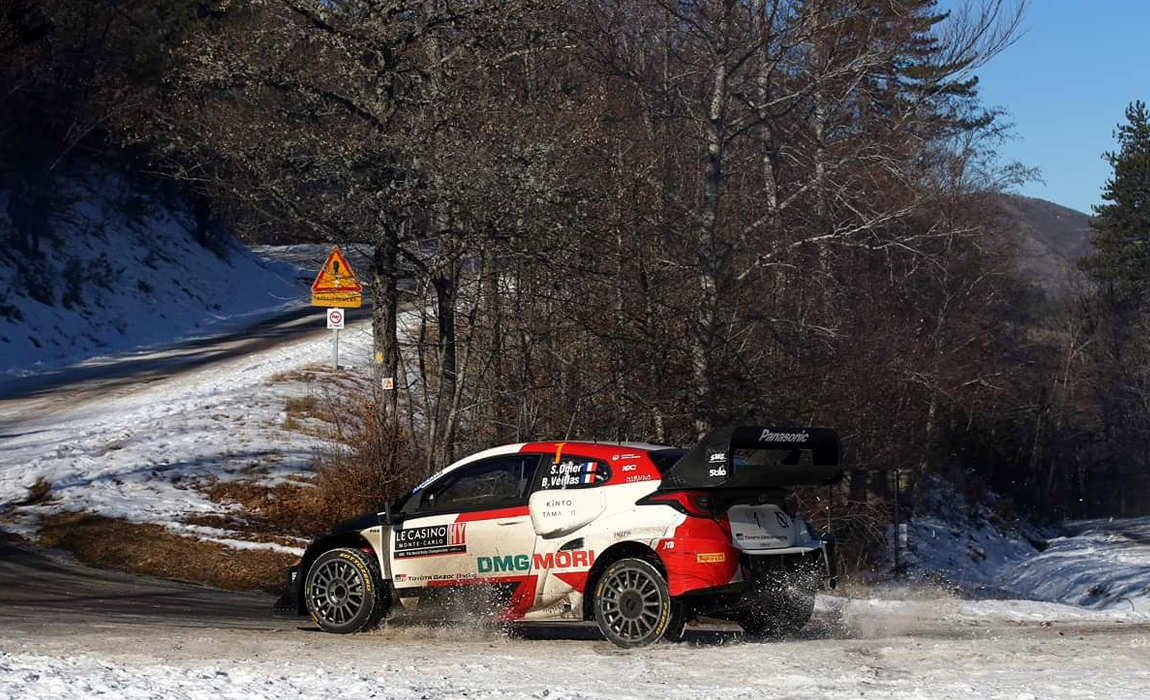 For Thierry Neuville, his shocking Monte had reached new levels in the first of the repeated stages in the afternoon loop. The Belgian had been suffering mechanical issues with his suspension all day. Despite trying to apply a fix himself at the remote re-group, the front right shock absorber had given up, breaking free from its top mount.

But Neuville has that never give up attitude remember? Although it looked terminal, at the stop line of the stage, he insisted that he would carry on nursing the i20 through the final stage and onwards back to service in Monaco; in the hope that he could at least live to fight another day and attempt to pick up some Championship points.

Another driver who was in search of some consultation points was Elfyn Evans. The Welsman took advantage of the regulations to resume his rally after his off in the last stage of the morning loop but was now some 20+ minutes down on the timesheets. With a long way to climb back up the order to get inside the top 10 where the points were awarded; his Monte had become nothing more than seat time in the new Hybrid Rally1 GR Yaris.

The scrap upfront between Ogier and Loeb resumed with Loeb getting the better of rally leader Ogier by a slender 0.2-seconds, but they both knew what was coming up next in the Silsteron stage where all that drama had played out in the morning loop.

The final stage of the leg was the second pass through the treacherous Sisteron and the games between the two Sébastiens out front were in full swing. Ogier had selected his mix of two softs and two snow tyres but upon seeing Loebs selection quickly followed suit. Whether that was right or not it paid off as he got the better of Loeb by some 16-seconds to head into the final day of action with a 21.1-second lead.

“I was planning to go with the snow tyres because it was the safest option, but I saw that Séb was going for slicks, so I quickly changed at the last minute before the start. It was tricky to drive in places but fun on the dry bits.”

Toyotas Kalle Rovanperä had been having a terrible rally, struggling on every stage. However, the young Finn ended his day with two fastest stage times which earned him 4th in the rankings but he was still almost 38 seconds away from the third-placed man Craig Breen who in his own words was having “an average rally”.

“It has been quite a big change from two days ago. Now it’s starting to be a bit enjoyable in the car and it’s getting better all the time, so I can be happier.” 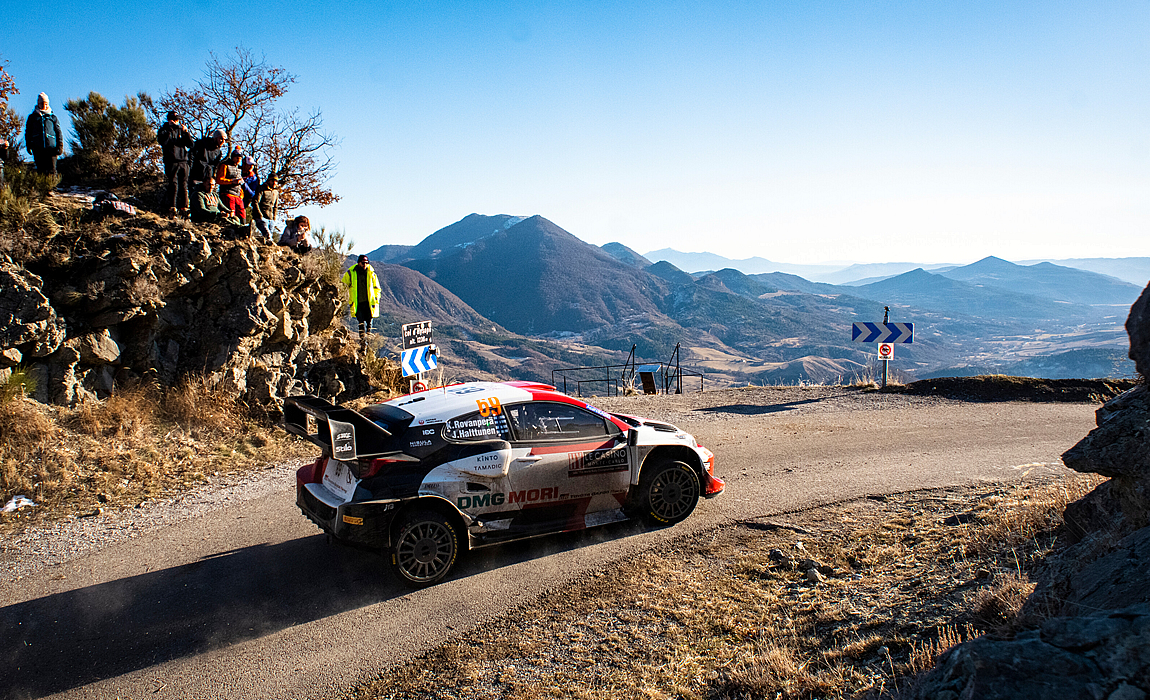 Stéphane Lefebvre who had an amazing day previously fighting with the likes of Andreas Mikkelsen was hit with a 30minute time penalty following a safety breach between the flying finish and stop line of SS8 (the final stage of Day 2). This dropped him out of contention and to add to his wows, he then ripped a wheel off with a spin on the second test of the morning loop and was into retirement.

After that morning loop which was cut short to just two stages following the Elfyn Evans induced red flag, Tok Sports Andreas Mikkelsen was sitting comfortably in his Skoda Fabia Rally2 EVO with a lead of 18-seconds to Yohan Rossel in the Citroën C3.

The afternoon recommenced with Rossel attempting to chase down Mikkelsen, but the young Frenchman picked up a puncture towards the end of stage 12 to slip further back.

In the second pass of the Sisteron Stage, the final stage of the day, Mikkelsen also picked up a puncture. Luckily for the reigning WRC2 champ, he had a comfortable lead in hand and still managed to end the day with a 22-seconds leads over Cais Erik heading into the final day.

“There is so much dirt going into the road. I didn’t feel that we hit anything, but the front right started to go down. It was 5km to the finish so we tried to carry on, but then it went down to the rim. It’s a long rally and anything can still happen.“ 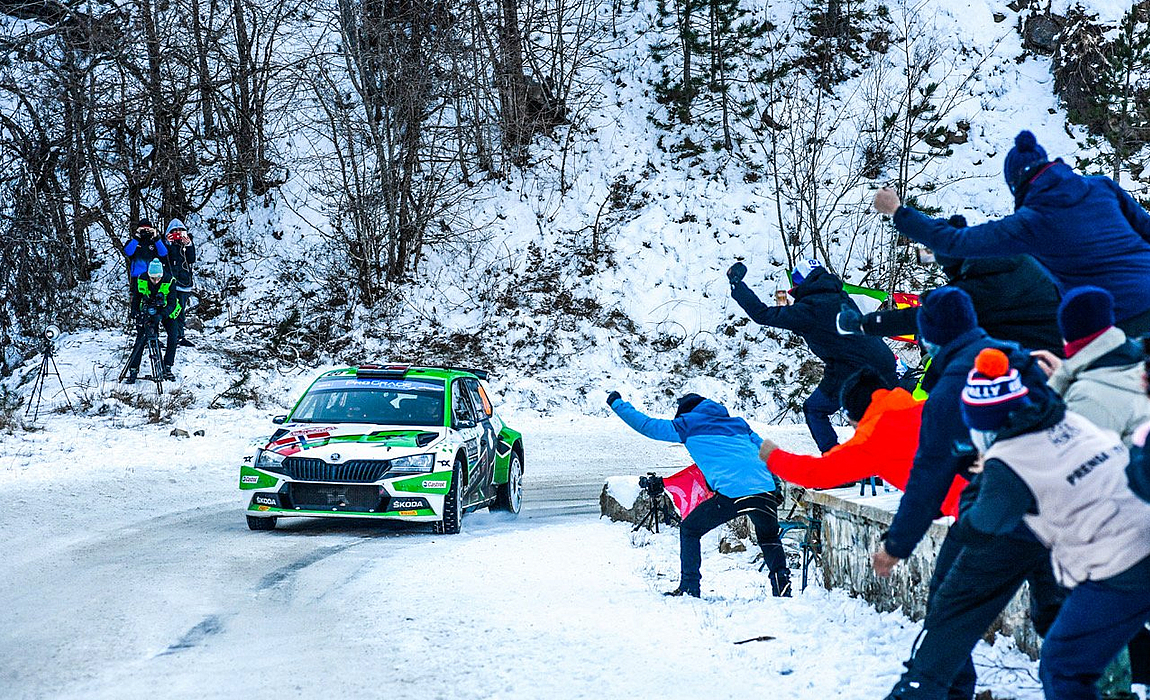 The final day of the 2022 Rallye Monte Carlo will conclude with a further four stages totalling 67km. Towards the northwest of Alpes-Maritimes, two stages will be run twice starting with a new section of the La Penne – Collongues (SS14/16) stage at 19km and continuing on with Briançonnet – Entrevaux (SS15/17) at 14km.

Here is where the second run will be the final Power Stage shoot out for the top drivers and will deliver us our first victor of the season.

With a healthy 21.1 seconds lead over fellow countryman Loeb, in the battle of the GOATS (The Greatest Of All Time) Sébastien Ogier is on the brink of his 9th Rallye Monte Carlo victory. 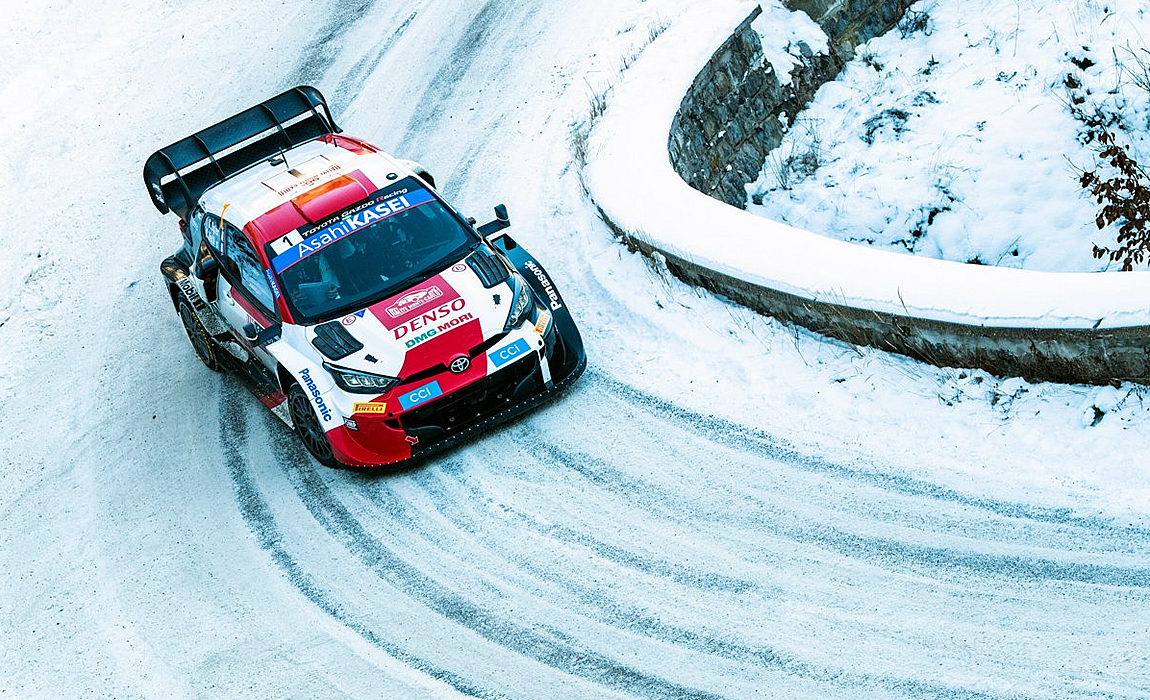