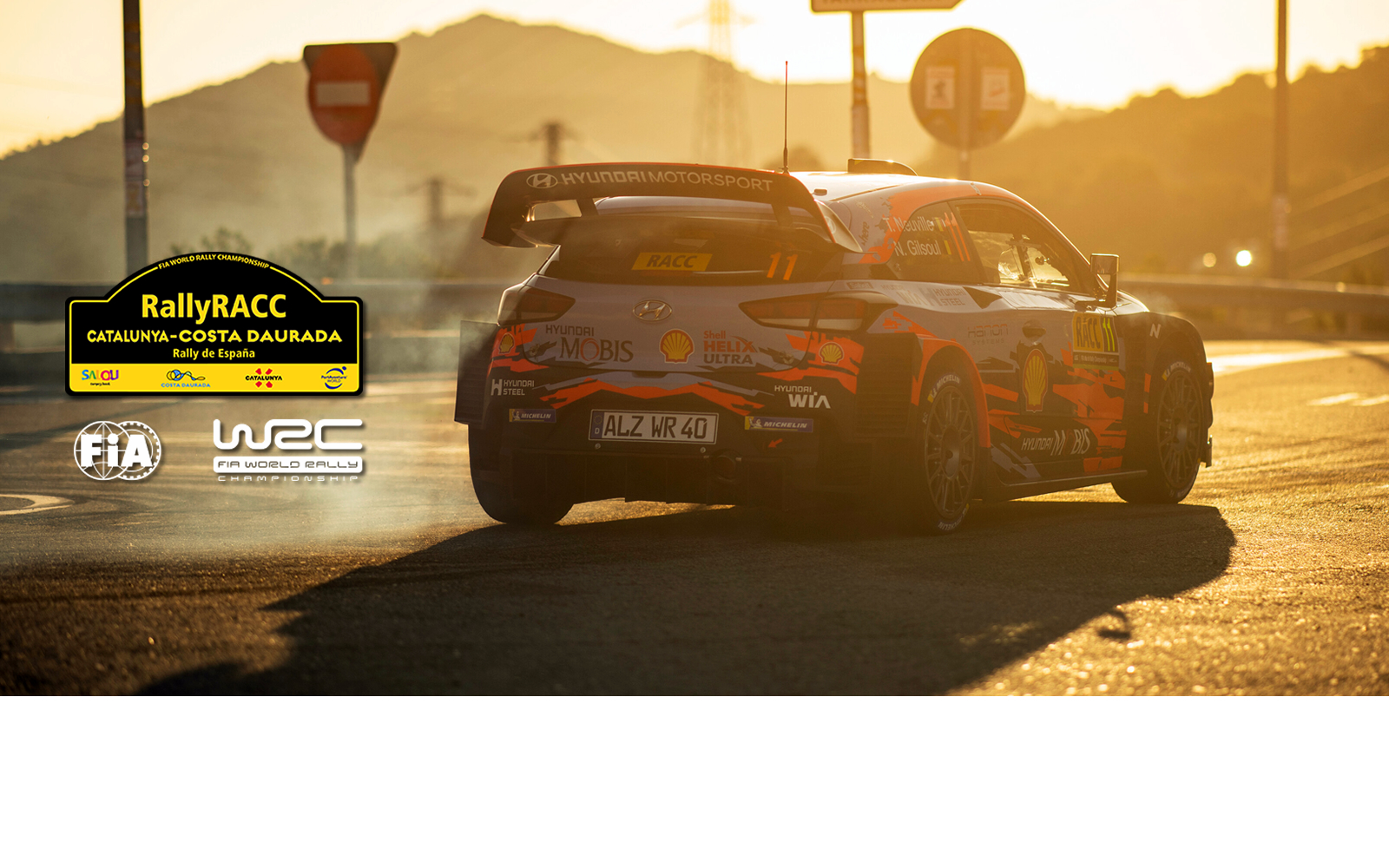 Last time out in the Forest of Wales, Estonian Ott Tanak moved even closer to the drivers’ title by winning Rally GB for the first time in his career. For this vital event in Spain, 17 stages across three days and two different surfaces with a total of 325km were all that stood in Tanaks way of the 2019 World Drivers’ Championship title.

Thursday morning on the outskirts of the seaside resort of Salou, Britain’s Kris Meeke laid down the fastest time in his Toyota Yaris on the short 2km Shakedown test; beating local hero Dani Sordo in the Hyundai i20 by just 0.3 seconds.

Friday morning the crews headed out west from Rally HQ at the Port Aventura theme park in Salou for three familiar gravel stages and the longest leg of the event. Championship leader Ott Tanak was first on the road into the short 7km opening stage SS1 Gandesa; but it was championship rival Sébastien Ogier who took first blood here. Ogier who beat Spaniard Dani Sordo by just 0.7 seconds said that he had an ambitious tyre choice; however, both Tanak and Neuville had both opted for the same rubber.

Tanak was always going to struggle on the opening day sweeping the loose gravel but it was Neuville who was very much on the pace from the off. Just a second behind Ogier in the first stage, the Belgian won stage 2 Hora-Bot to take the lead of the rally ahead of his team-mate, Sordo who was just 0.4 seconds behind him overall.

But while the Hyundai’s were leading the way in this stage, disaster had struck for Ogier who suffered a total power steering failure to his C3. His title hopes were all but over now and although a clearly devastated Ogier had made it to the end of the stage; a failed attempt to fix the problem on the road section meant that he had to drive the next stage as it was.

The final stage of the mornings’ loop was the longest of the day, nearly 39km of La Fatarella – Vilalba and it was a Hyundai 1-2-3 here. While one physically exhausted Frenchman was man-handling his car to the end of the stage, it was another, Sébastien Loeb who was to win the stage. However, despite picking up a puncture in this final stage of the morning, it was Dani Sordo who actually led the rally heading into the midday service.

Sordo continued his pace into the afternoons’ stages winning the first stage of the repeated loop (SS4 Gandesa 2). Loeb then won the remaining two stages of the day to take the lead of the rally in an all Hyundai lock-out; with Neuville 1.7 seconds behind and Sordo in third.

Frenchman Sébastien Loeb aka “The Goat” (Greatest Of All Time) had dominated the Spanish event in the past, winning every year between 2005 and 2012. Last year Loeb returned to contest the event with Citroёn and won in the C3. This year the nine-time World Champ was contracted to Hyundai for a partial season in the i20 and found himself leading the event at the end of the opening leg, was Loeb about to repeat last year’s win?

“That’s incredible. I pushed really on the limit. The grip was very good and I tried from the start until the last meter. It’s incredible to have three cars out in front – we didn’t believe in that when we started the rally. There are still two days on tarmac left to run and we never know what can happen.”

In the WRC2Pro category, it was Norwegian Mads Ostberg who dominated the opening day on the Gravel. Mads and Co-Driver Torstein Eriksen who has had a sporadic WRC2Pro season competing on selected events in the R5 Citroёn C3, won all of the day’s stages to lead the recently crowned WRC2Pro champ, Kalle Rovanperӓ by more than 41 seconds.

Overnight in a longer than usual service, the mechanics had to convert all cars from Gravel to Tarmac spec ready for the asphalt assault. This meant lowered suspension, bigger wheels & brakes and slick tyres.

The second day was a completely different rally for the drivers who had to adapt their driving styles to the fast, smooth and almost race circuit like road surface. A little over 121kms across 7 stages faced the crews and first up was SS7 Savallà where Thierry Neuville set the benchmark ahead of team-mate Loeb and therefore took the lead of the rally. Neuville followed that up with another win in the very next stage, SS8 Querol 1 where he stretched out his lead to 7.5 seconds.

Now not disadvantaged by being first on the road like the previous day on gravel, Ott Tanak could finally set about chasing down the Hyundai’s in search of that first World Championship title. Tanak moved up from 5th to 4th and won his first stage of the event on the final stage of the mornings’ loop, SS9 El Montmell.

Tanak then showed why he is currently the best rally driver in the world by winning three out of the four stages in the afternoons’ loop. He beat Neuville by just 0.3 seconds in SS10 Savallà 2, beat team-mate Jari-Matti Latvala by 0.5 seconds in SS11 Querol 2 and then beat Ogier in SS12 El Montmell 2; the fight was well and truly on.

The crews then headed back to Salou for a final blast along the sea front of which Thierry Neuville won to end the day with a 21.5 seconds lead over team-mate Dani Sordo; but crucially Tanak had moved into third here overhauling Sébastien Loeb, one of Neuville’s rear gunners.

Mads Ostberg continued to lead the WRC2Pro field throughout the day, he didn’t win any stages but his lead from the opening day on the loose stuff was looking like more than enough to take the rally win barring anything untoward happening.

And so the final day of the penultimate round of the season would be where a new champion would be crowned. Just four stages totalling only 74km on the Spanish Asphalt was left to tackle, all Tanak had to do was bring it home and take just enough points to clinch the drivers title.

Neuville still had to press on and fight for the rally win as if he was still in with a shot; after all, anything could still happen as we have seen countless times before with final-day dramas in rallying. As the sun came up over the Spanish mountains Neuville won the opening stage of the morning, SS14 Riudecanyes and was closely followed by team-mate Sordo; who had to give it everything to keep Tanak behind him. Sordo knowing the importance of giving his team-mate the best possible chance pushed on and won SS15 La Mussara to extend the gap between him and Tanak.

Back out after one final quick service and Sordo had gotten the better of Tanak again to win another stage; once again extending the gap just that little bit further. So with just the one final power stage to go, it was looking like a Hyundai 1-2 but hang on one minute, there’s a World Championship at stake here and Tanak was going to go all out to grab it.

As expected Norwegian Mads Ostberg brought this Citroёn C3 R5 car home for the WRC2Pro victory; finishing off the final day with three out of four stage wins and a lead of more than 54 seconds over his closest competitor Jan Kopecký, in the Skoda Fabia R5 EVO.

Although Thierry Neuville had won the rally, with just 20.72km of the final stage of the event Estonian Ott Tanak blew the entire field away by not only taking the stage win but snatching 2nd overall from Dani Sordo and with it taking the 2019 FIA World Rally Championship drivers title.

Tanak, who won the Estonian Rally Championship in 2008 and 2009 and has been mentored by fellow countryman and former World Rally Winner Markko Mӓrtin, had finally reached his life long dream of becoming World Champion.

He has competed in various levels of the World Rally Championships from P-WRC, S-WRC and WRC2 and has been in and out of the top-level with M-Sport over the years. Since winning his first-ever World Rally in Sardinia back in 2017 in a Ford Fiesta and joining Tommi Makinen’s Toyota Gazoo racing outfit at the start of the 2018 season; bar a hand full of technical failures which at times brought heartbreak in itself, Ott has been very much the man with the pace to beat.

By wining four rallies in his first season in the Toyota Yaris he came close in the title fight last year finishing 3rd. But for 2019, after wining 6 rounds (with one still to play for) he had beaten tough competition from the likes of Thierry Neuville and six times World Champ Sébastien Ogier.

“Feels good! It’s difficult to say the pressure I felt this weekend – it was next level. To manage all this and get through it has been the target of my life. When you are on the verge of this you cannot imagine it. Thank you to the team – you have done a great job. I never wanted to take risks but my mother said yesterday evening that if I want something I can make it happen. I just had to make it happen.”

Throughout the whole rally weekend rumours were rife around the service park that Tanak had signed with Hyundai for next season; this has now been confirmed as a two-year deal and we now await to see what the rest of the team’s drivers moves will be.

Hyundai Shell Mobis World Rally Team looked to have all but secured the manufacturer’s title in Spain; however it is still mathematically possible for Toyota Gazoo Racing WRT, it is unlikely, but we shall see what the final round down under in Australia holds.