With another 8 stages over 121kms of competitive action, the second day of Rally Croatia was the longest leg of the event. Overnight rally leader Thierry Neuville had a far from ideal start to the mornings’ loop. Starting the day with a 7.7-second lead over Sébastien Ogier, the tyre strategy between teams would play a big part right from the off on that opening stage. 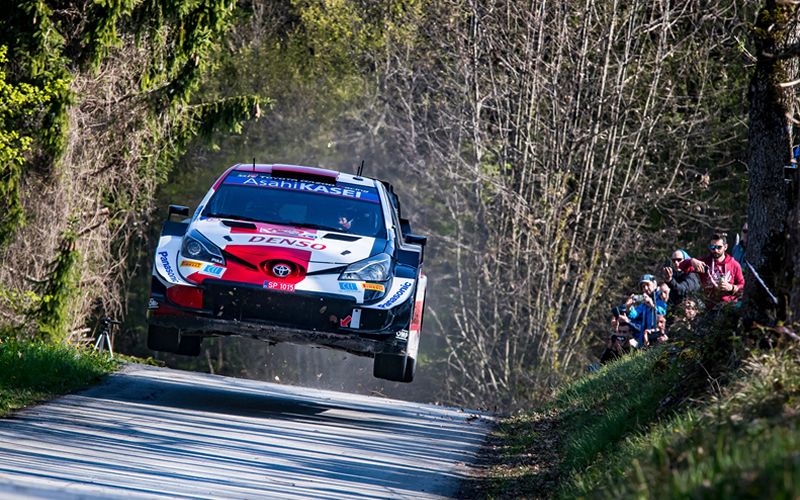 Ogier had a good push in the mornings opening 20km stage (SS9 Mali Lipovec – Grdanjci 1) and Neuville like his Hyundai teammate Ott Tänak was on a different tyre strategy to the Toyota drivers.  Neuville was losing time to Ogier on every split and by the end of that first stage, Neuville had not only lost some 12 seconds to Ogier but had lost the rally lead, dropping down to third behind Elfyn Evans as well. 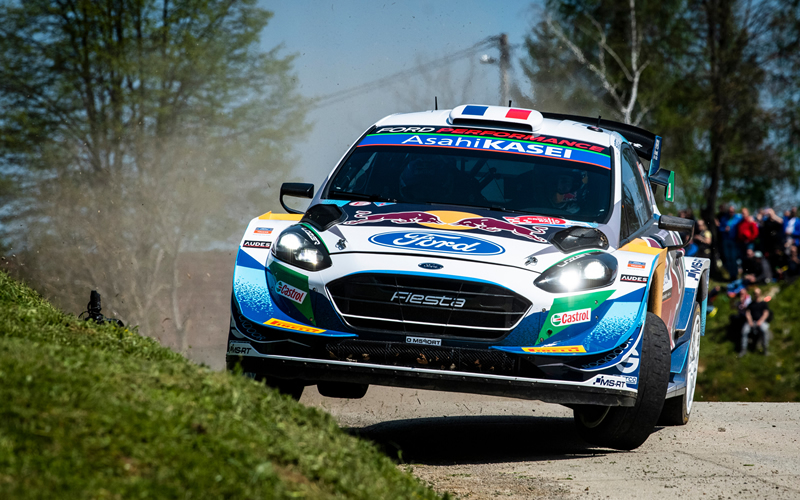 Perhaps the surprise of this first stage of the day was the performance of the young Frenchman, Adrian Fourmaux. Making his debut into a WRC car for M-Sport in Croatia, he posted the second-fastest stage time and was just 2 seconds slower than his fellow countryman and seven-time World Champ, Ogier. This is incredible considering he hadn’t even set foot in a rally car some four years ago!

“I had a good feeling with the car and I was really happy about my drive. I was careful in the tricky sections but started pushing where I felt the stage was okay. I started to lose the tyres a little bit at the end of the stage but it was a nice drive.” 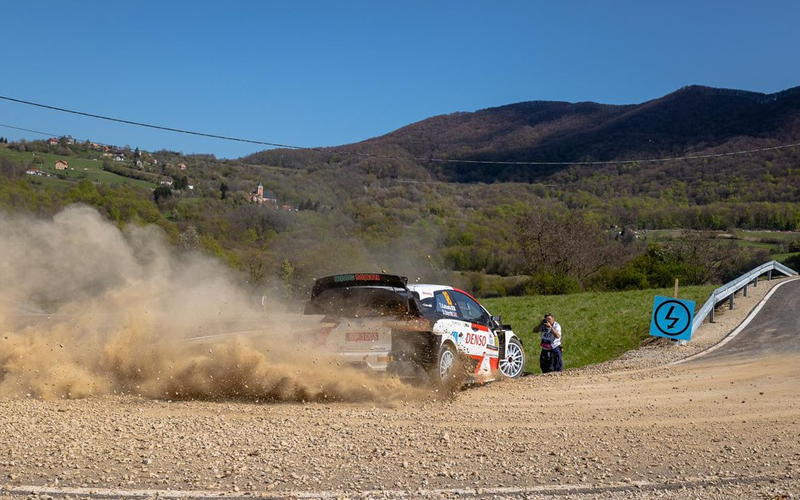 The Toyota’s continued on their charge into the second stage of the morning (SS10 Stojdraga – Gornja Vas 1) which was another 20km test. This time it was Japanese driver Takamoto Katsuta who grabbed the stage win, ahead of his teammates, Evans and Ogier. Neuville had a terrible time and was in danger of drifting back away from the fight at the front. 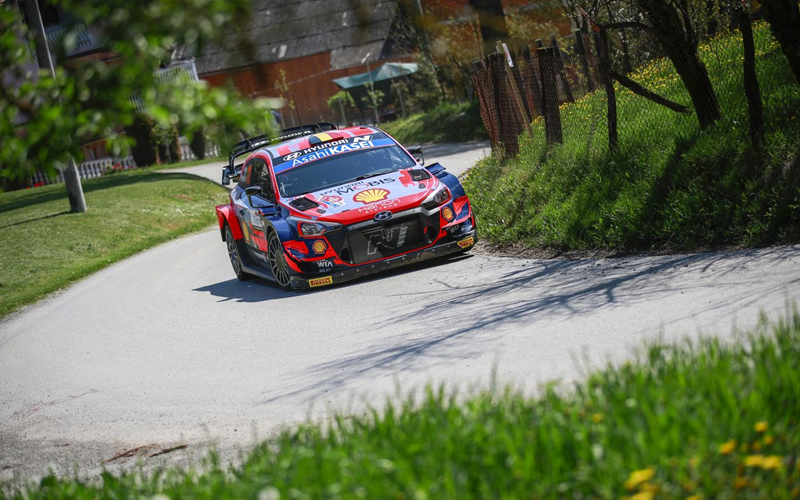 Neuville headed into SS11 knowing that he must commit more and at times appeared on the ragged edge, as he pushed to get the most out of his tyres. The best that Neuville could manage was a second fastest time behind Evans. This was at least something for the Belgian, but he was still some 15 seconds off the pace, with just one more stage to run in the morning loop. 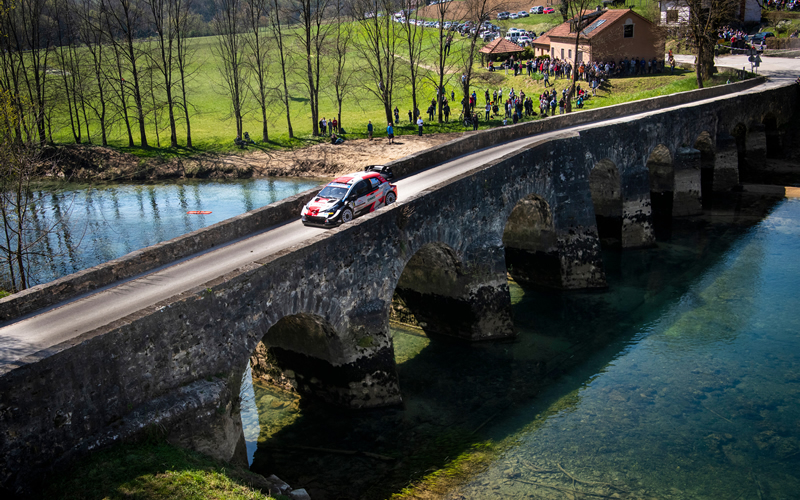 The final stage of the morning was a short 8.7km stage, Ogier extended his lead over Evans by rounding off the morning with another stage win. Ogier and Evans were separated on this stage by Ott Tänak who was more than 37 seconds off the fight and his Hyundai teammate, Neuville in third. Ogier headed to the midday service the leader of a Toyota 1-2 and with a 7 second lead over his teammate Elfyn Evans.

At the midday service, Hyundai boss Andrea Adamo was clearly unhappy that the team got the tyre strategy so wrong.

“If you want to be world champions, even if it is hard you should not make mistakes” “Most of the time when there has been a difficult tyre choice, we have managed to pick the wrong one, so there is something in the organising that I have set up which doesn’t work, and I have to sort it.”

His team and drivers would absolutely need to sort it and deliver a considerable turnaround in the afternoon if they were to bring the fight to Toyota in what remains of this very challenging asphalt rally. 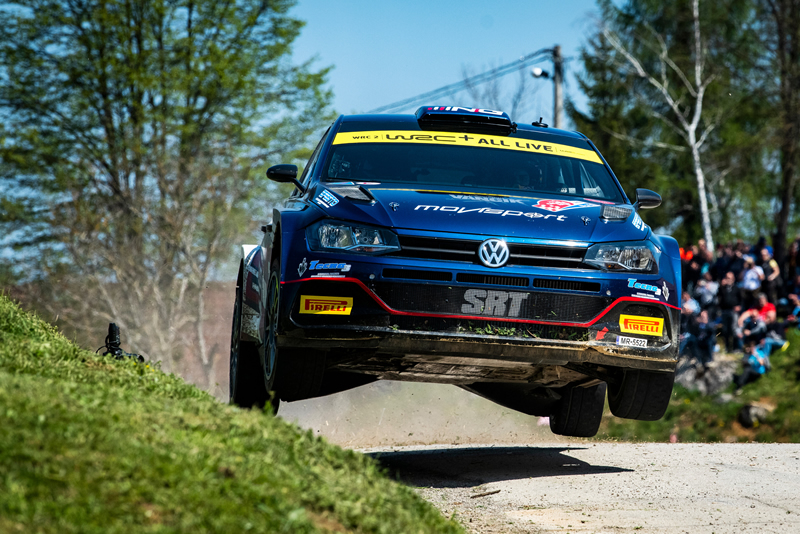 Today Russian Nikolay Gryazin set about chasing down WRC2 class leader Mads Ostberg, he opened up the day with a stage win, beating the Norwegian Ostberg by 5.5 seconds. 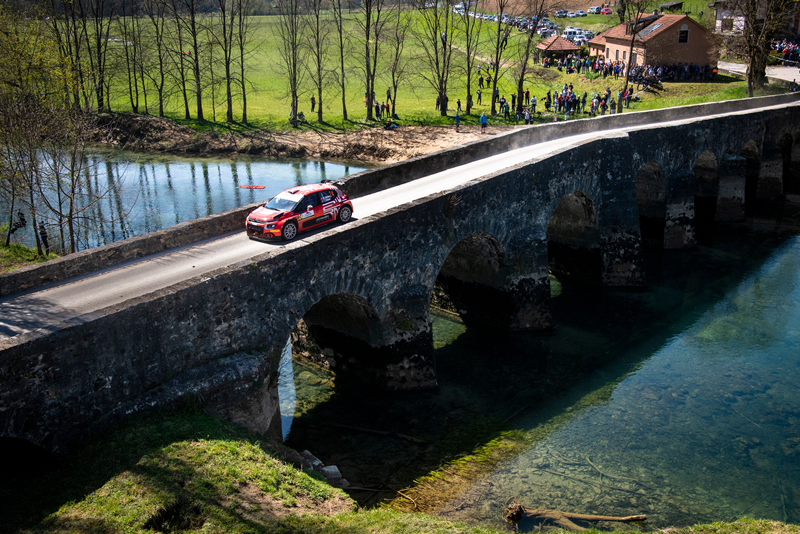 The Gryazin – Ostberg battle continued to rage on throughout the morning loop of stages, with Gryazin winning SS11 and Ostberg winning the final stage (SS12 Vinski Vrh – Duga Resa) of the morning loop. Despite reporting “I have been struggling a bit with my pace notes and I haven’t had the rhythm.” Ostberg went into service with a 2.3-second lead.

The repeated afternoon loop was going to be make or break for Neuville, the stage conditions were very polluted with many opportunities to pick up a puncture. The majority went for the hard compound, however, Hyundai once again opting for the risk of carrying just one spare. 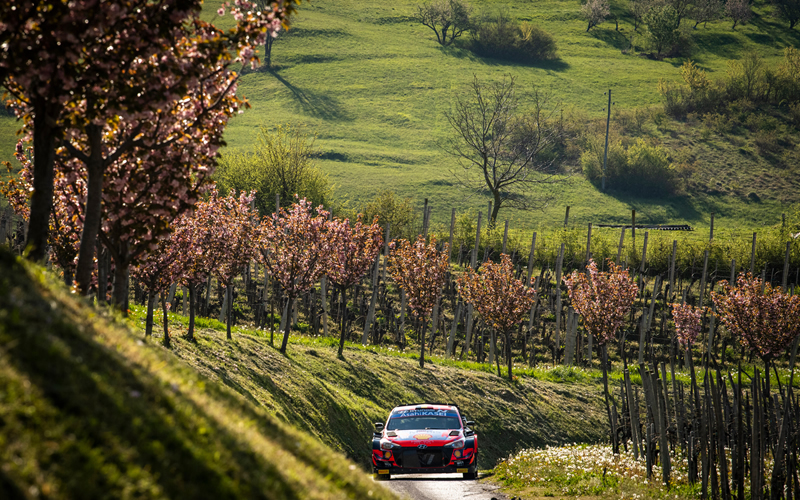 Forumaux set the benchmark pace, Ogier picked up a slow puncture in the last 2km of the stage and the air had all vacated the tyre by the time he reached to stop line. Thierry Neuville was back refreshed after the midday service and came out fighting, taking the stage win to close the gap not only to Evans in second but now to within 10 seconds of rally leader Ogier.

Neuville said: “With the right tyres, the car is working nice. It was a really challenging stage but I had a good rhythm – I had a few slides but I saw some lines everywhere so I guess it’s the same for everyone.” 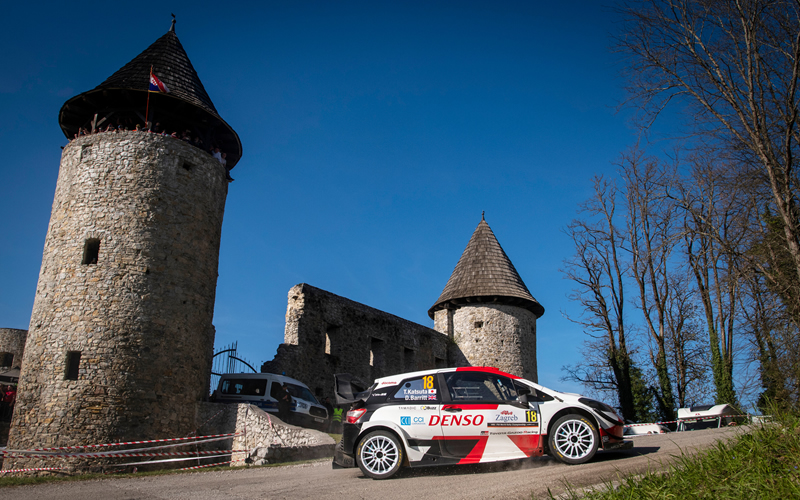 Takamoto Katsuta was able to repeat his stage winning performance on the repeated 20km Stojdraga – Gornja Vas test to take his second stage win of the event. On the penultimate stage of the day for the second time on this rally, we had two drivers posting the exact same stage time. It was once again Ogier but this time it was a hungry Neuville who matches his pace. 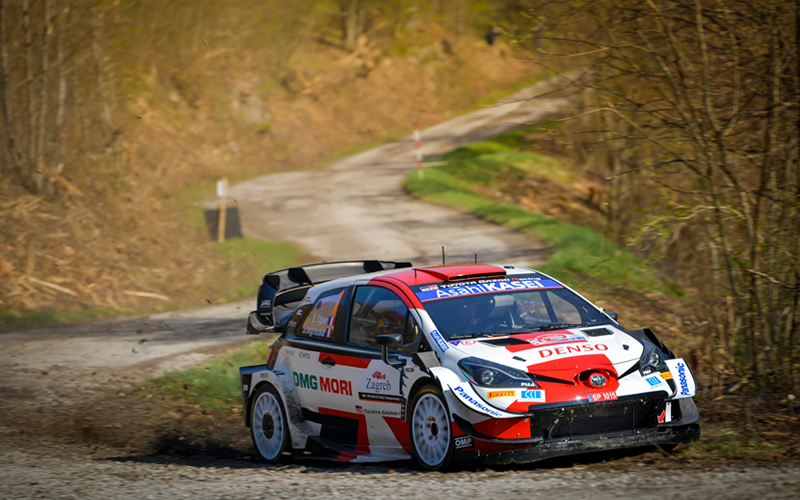 Ogier maintained his focus on the final stage of the day to rack up his 6th stage win, beating his rear gunner Evans by just 0.4 seconds. Evans held off a resurging Neuville but the young Welshman in now in real danger of losing that second spot on the podium to the Belgian. We have seen many times in the past, Neuville sensing half and opportunity and will at the very least be hunting Evans down on the final day.

We tried to fight back this afternoon when we had better tyres on the car. I had an issue with my jack and I couldn’t change tyres all loop, so my tyres were a bit dead for the last stages. I tried to continue to push but obviously, we lost a little bit.” 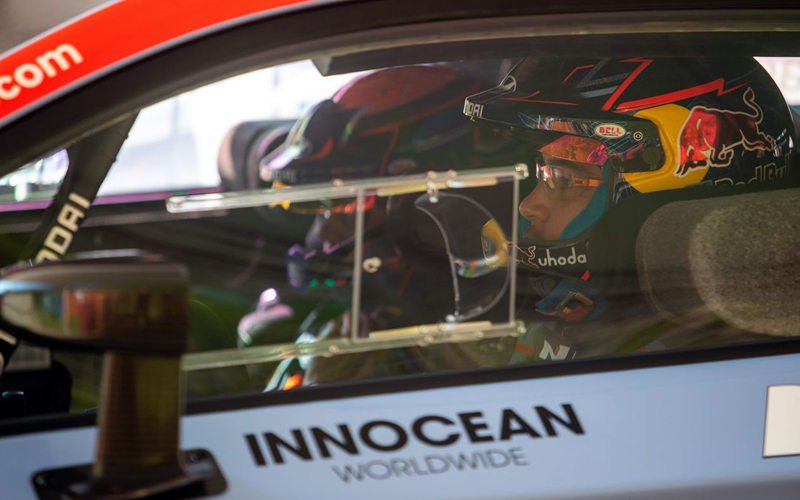 When asked what he thought of Neuville’s afternoon, Andrea Adamo (Hyundai Team Principal) said “It would have been difficult to make it worse” “This afternoon the tyre choice was mandatory, it not as if you could have done something different.” When the level of competitiveness is so high, these silly mistakes (The morning’s Tyre Strategy) will drive the result in the end”

Rally leader Sébastien Ogier will start the final day with a 6.9 seconds lead over his Toyota teammate Elfyn Evans. With a little over 10 seconds separating the top 3, and just over 80km across 4 stages remaining, Hyundai’s Theirry Neuville still has a chance here and a final day top battle in Croatia is on the cards.

“It has been a good day for sure – the only issues were punctures, otherwise we can be happy.” “I am glad I had two spares, without the punctures the gap would have been a bit more comfortable.” “It’s going to be a fun Sunday!”

In the first stage of the repeated afternoon loop, WRC2 contender Nikolay Gryazin suffered a power steering failure and had to manhandle his VW Polo GTi to the end of the stage. A physically drained Russain had dropped over a minute loosing P2 to Teemu Suninen and the time loss suffered has all but ended his battle with Ostberg. 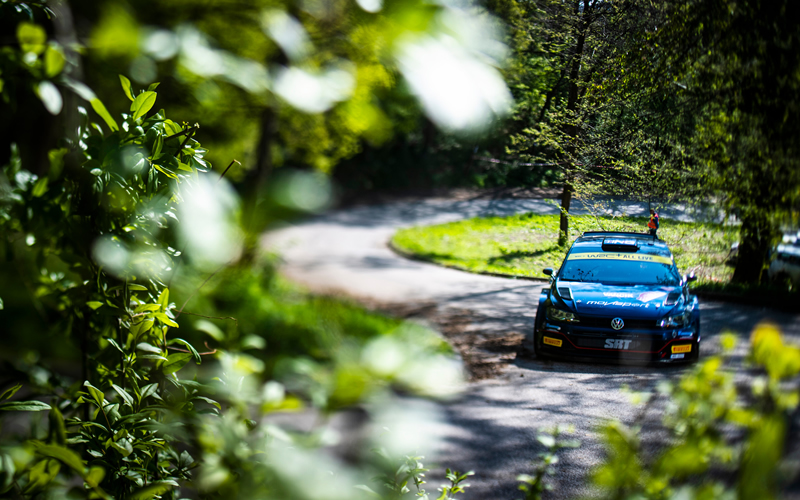 Somehow Gryazin managed to fix the issue on the road section to the next stage and then aced it, winning the stage by 3.9 seconds over WRC2 leader Mads Ostberg. Gryazin then proceeded to win the remaining two stages of the day and left us wondering what could have been if it wasn’t for that mechanical issue? 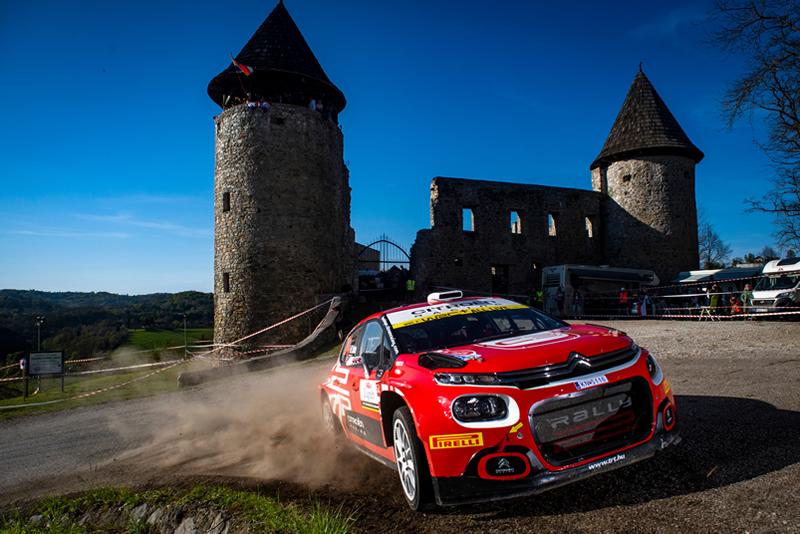 WRC2 class leader Ostberg ended the day way out in front with a very comfortable lead of over 1 minute to second place Teemu Suninen.

“I think the performance has been good. We have been able to increase our pace and drive more controlled in the afternoon. We have a bit of a gap now but we have to stay focussed for tomorrow – it’s a long day and the Power Stage is probably the most difficult of the rally.”