After sitting out of the calendar last year due to COVID, Round 4 of the 2021 FIA World Rally Championships, the 54th Vodafone Rally de Portugal not only sees a return for one of the original legendary World Rallies but also sees the return to gravel rallying for the first of four full gravel events this year.

The opening leg of the rally proved a challenging one, with limited numbers of allocated tyres and a total of 122km over 8 stages there was no service, so making it back to the end of day service park in one piece was going to be important. 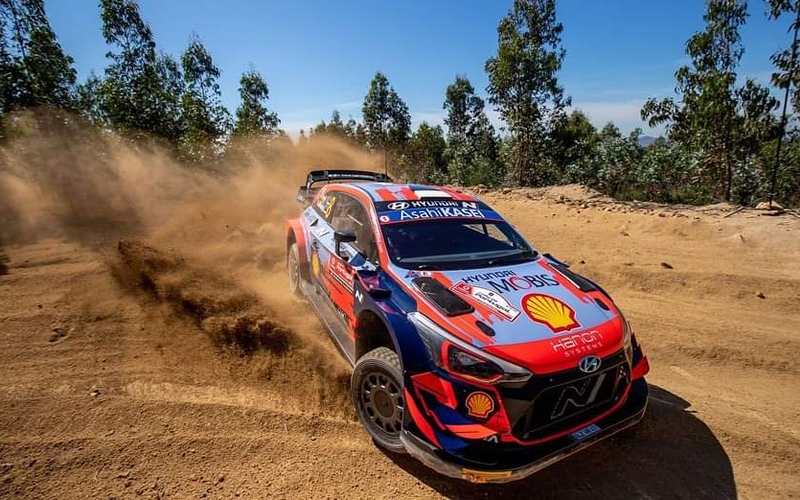 Five times Portugal winner Sébastien Ogier was first on the road into the opening 12km Lousã test, Estonian Ott Tänak was quickest off the mark taking the opening stage win in his Hyundai i20 despite a spin and stall. But it was his returning team-mate, Dani Sordo who was the one to impress on the opening days morning loop of stages. 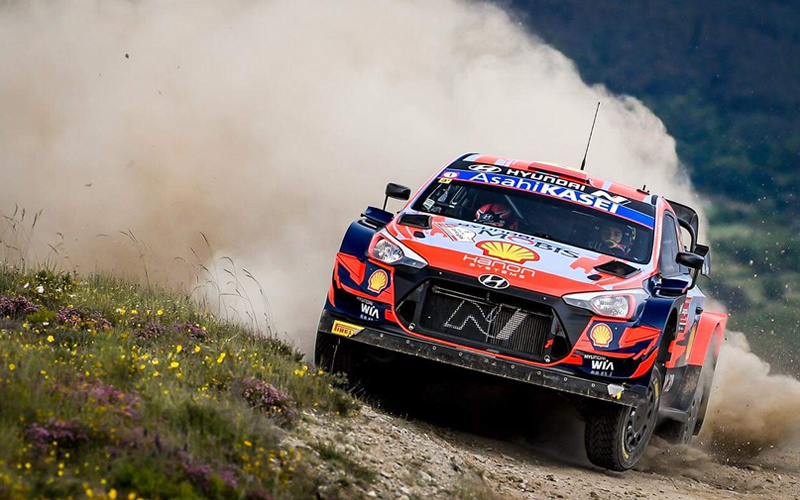 The Spaniards (now with a new Co-Driver – Rozada Borja alongside him) last outing was on the tarmac of the opening round of the season at The Monte Carlo Rally in January and was back on form in no time. Winning two of the four morning stages from his road position to lead both of his teammates Ott Tänak (2nd) and Theirry Neuville (3rd) and to lead the rally overall by over 7 seconds; the morning on paper was a good one for the Hyundai team.

“The car is working well and now with the new co-driver it’s much better, I tried to not push so much because I don’t know what tyres we need to use again.” 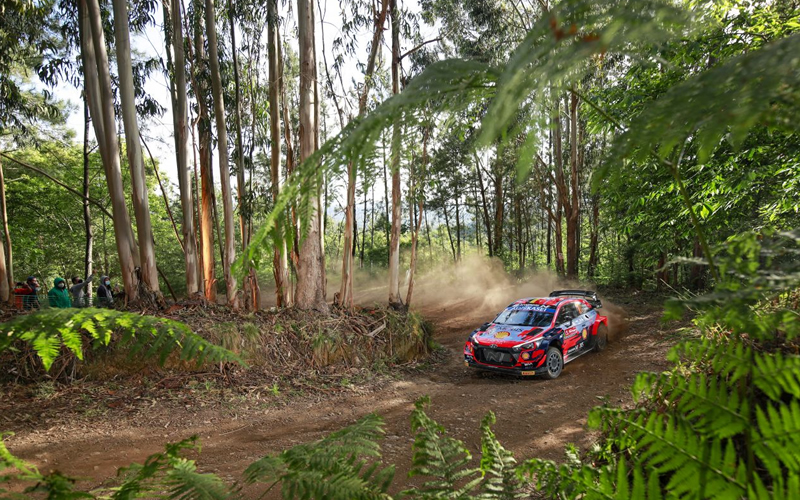 The repeated afternoon’s loops of stages delivered a Hyundai battle upfront with Tänak and Neuville trading places, but this scrap for 2nd place proved a little too much for the Belgian, Thierry Neuville who clipped a bank on stage 7 ripping a rear wheel off. He then spent a few minutes getting his i20 going again, unable to fix the damage on the roadside, this put him into retirement for the day and ofcourse out of contention. The unfortunate one who was impacted in all this was the following car, Elfyn Evans who got caught up in the Belgians dust; but all was not lost for the Welshman as he was awarded a nominal time for that stage.

“I had a pace note which was really too fast. When I saw the corner, it didn’t work out. I tried to correct, but there was something like a tree stump which pulled us to the side.” 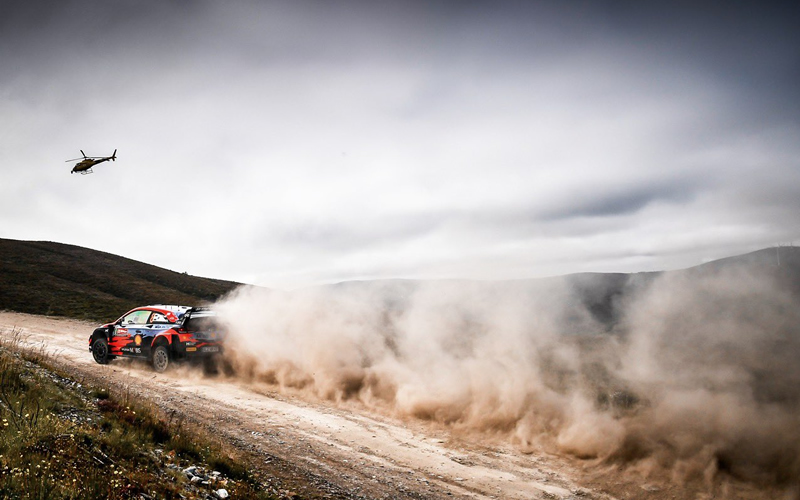 On the very same stage, Sordo stalled the engine of his car which handed the lead of the rally over to Tänak. The new rally leader rounded off the opening leg of the day with a final stage win on SS8 the Lousada Rallycross circuit super special stage and headed back to the service park with a lead of 13.5 seconds over the now second place Toyota Yaris, of Elfyn Evans.

“It’s a little bit strange to drive in front of the fans! It’s been a demanding day – so much has been happening and so many issues. I am looking forward to a bit of rest before we start again tomorrow.” 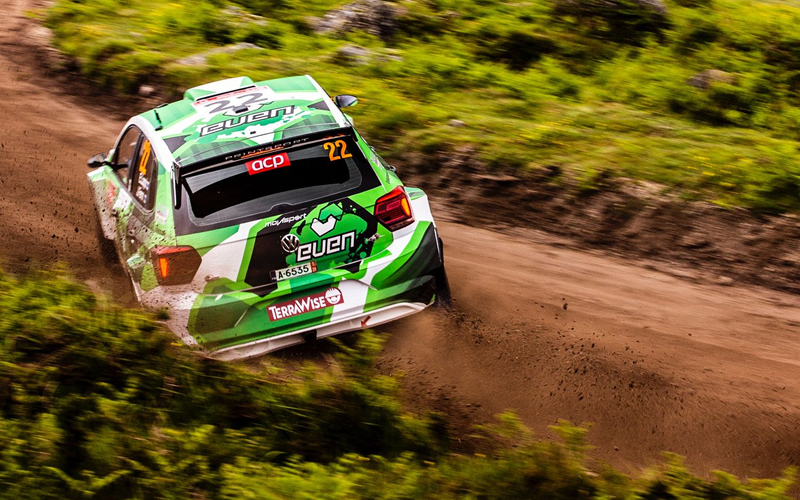 In the very competitive WRC2 category it was returning Finn, Esapekka Lappi who was on top on the opening day. Posting three fastest stage times he was locked in a battle with the Russian Nikolay Gryazin. Lappi ended the day with a 2.2 second lead over his Movisport teammate Gryazin, with M-Sports Teemu Suninen in third. Citroëns Mads Ostberg, unfortunately, dropped out of contention on SS3 with a puncture.

“It’s always nice to have a battle inside the team, and nice to see some audience. In the Arctic and last year I didn’t see so much audience. It’s so nice to see people. 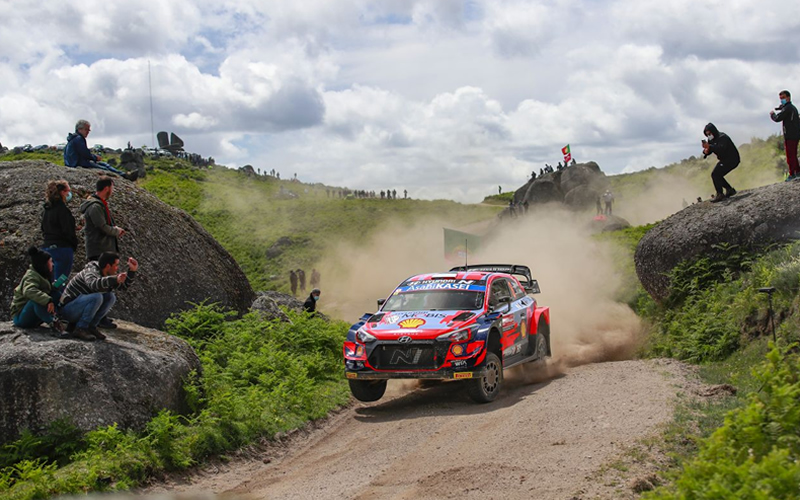 The second day of the rally began with a cold, misty start and had the longest competitive length of 165km, over a further 7 stages; with the Amarante stage being the longest of the entire rally at 38km. Overnight rally leader, Ott Tänak continued on his charge by winning all three of the morning stages to extend his lead over his closest rival, Elfyn Evans in second.

“The first loop has been quite okay”, “I had a good feeling, I am much more happy with the car today and it felt much more natural, so it’s good.”, “Let’s see if we can improve over the next loop, Overall, the car is driving smoothly.” 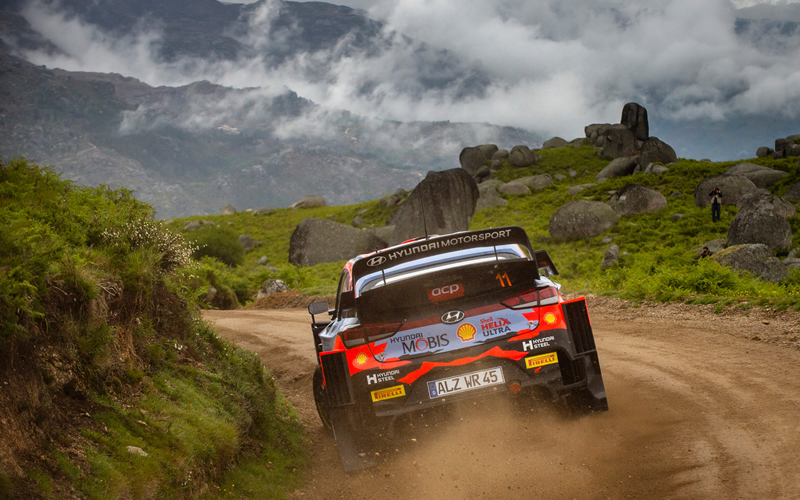 A super rallying Neuville who had started the day with a 10minute penalty ran into some problems before the final stage in the morning loop, which resulted in a further time penalty for lateness at the time control. Neuville eventually retired once again when back in the midday service halt stating “We have some issues, and we couldn’t solve them. We decided to keep going but it (The car) didn’t sound so good”. 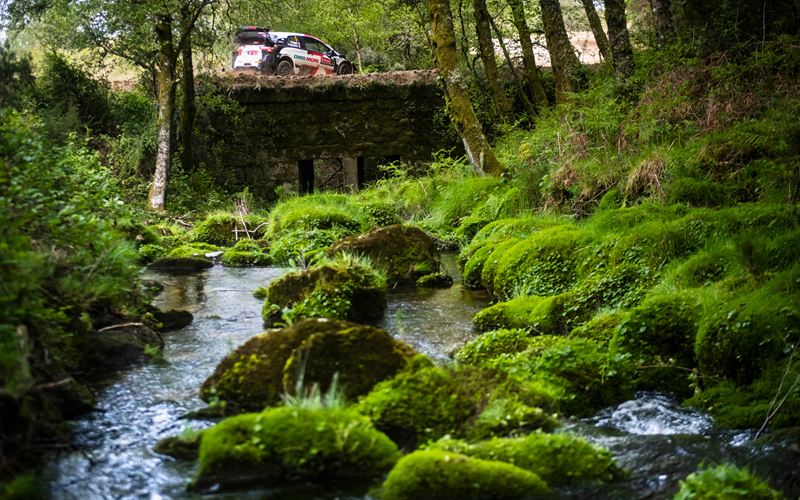 Meanwhile, in the Toyota camp, second place man Elfyn Evans was keeping Dani Sordo at bay in third with Takamoto Katsuta & Sébastien Ogier who were both creeping up the leader board to hold 4th & 5th positions. Seven times World Champ Ogier who had a difficult first day being first on the road on Friday was now sensing some championship points, now that the likes of Neuville was out of the picture.

“The morning has not been good for me. In the two first stages, I did not have the pace I wanted to have. We made some mistakes with our choices this morning, but we will keep fighting.” 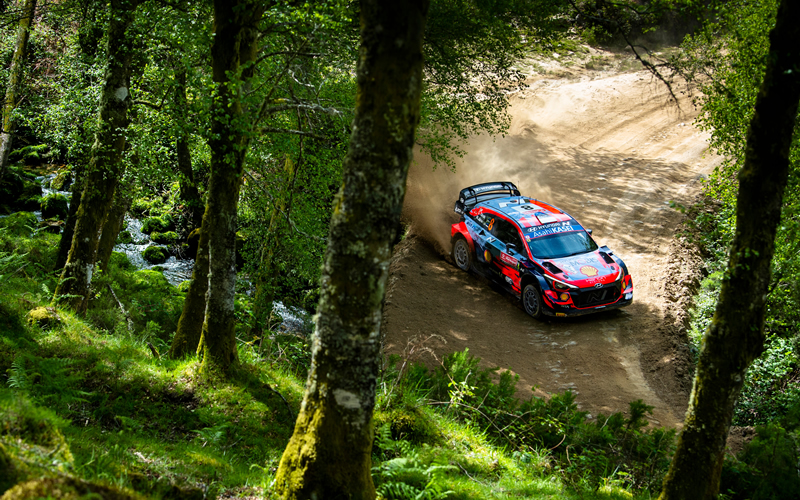 The afternoon loop of stages would see Elfyn Evans initially struggle to gain ground on Tänak, both taking fastest stage times until SS14, the penultimate stage of the day. Here Tänak who was leading the rally appeared to be on track for another dominating performance with more than 22 seconds lead upfront, until this repeat of the long 38km Amarante test. With approx 5km remaining on this stage, he damaged the rear suspension to the Hyundai i20. The Estonian attempted to nurse the car to the end of the stage but the suspension eventually collapses, forcing him to stop and subsequently retire. 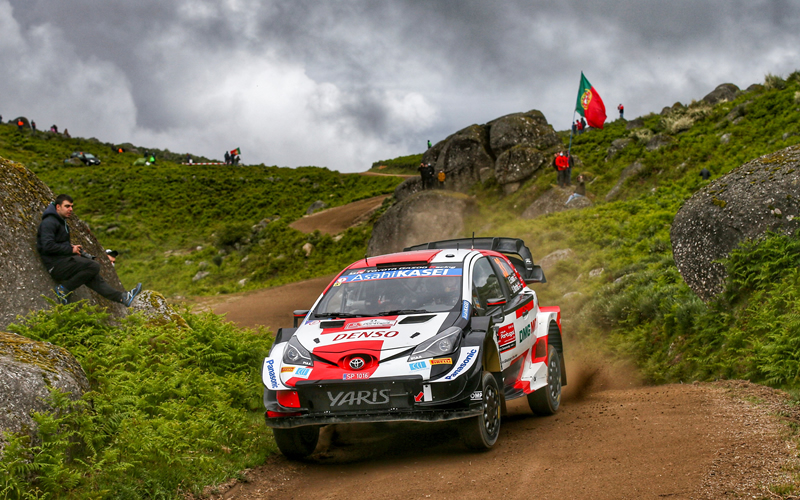 This unfortunate demise of Tänak handed the rally lead over to Welshman Evans, heading into the final short 3.3km Super Special Street Stage in Porto with a 16+ second lead to Dani Sordo. Sordo the tarmac ace was able to take a bit of time out of Evans by winning this final stage of the day despite an iffy starter motor. Evans would head into the final day of Rally de Portugal with a 10.7 second lead over Sordo, with a little under 50km across 5 stages remaining.

“It’s been tough, I’m a bit disappointed with that the final stage. We will try to hold on to the lead, you never what will happen but we will remain focused and give it our best shot.” 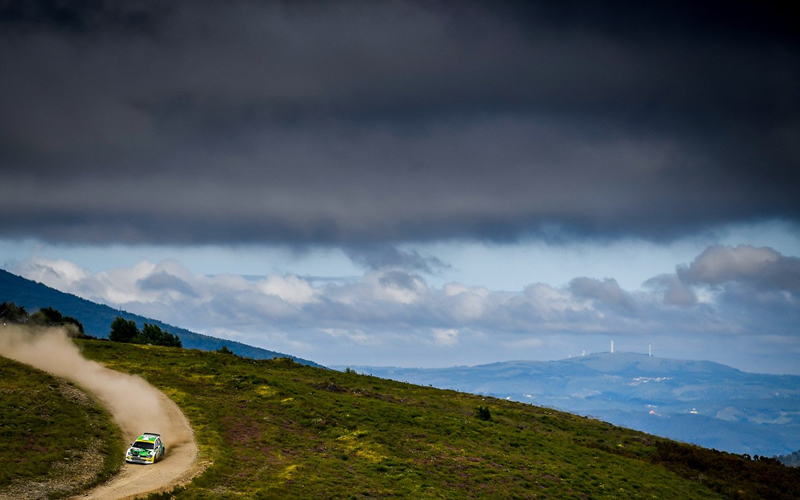 WRC2 leader Esapekka Lappi continued to battle with M-Sports Teemu Suninen throughout Saturday, Lappi won all of the morning stages getting the better of his fellow Finn Suninen every time. The afternoon’s loop of stages was a very much mixed affair with stage wins coming from Hyundai’s Oliver Solberg, Russian Nikolay Gryazin with Norwegian Mads Ostberg rounding off the day with the final two stage wins of the leg. Suninen dropped back on the second run of the long Amarante test after picking up a puncture, this gave Lappi a 40-second lead heading into the final days action. 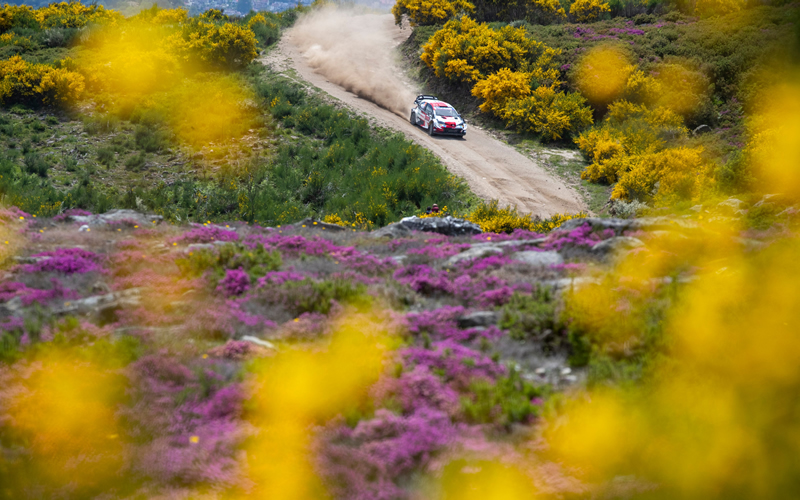 On Sunday morning Hyundai boss Andrea Adamo gave his instructions to Sordo and placed a target on the back of Elfyn Evans, but the Welshman kick-started the final day of Rally de Portugal off with a big push. In his quest for that first rally win of the year, Evans set about sending a clear message to second place Dani Sordo by winning the first two stages and doubling the gap between them. 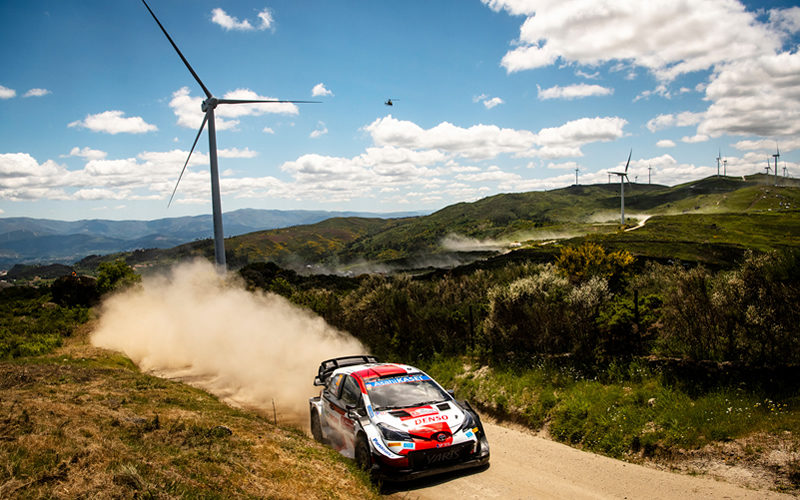 On the first run over the iconic Fafe stage, the Hyundai pair of Neuville and Tänak set about their high-speed reccies ahead of its re-run for the Power Stage, which would be their last ditched effort to grabs some championship points. Rally leader Evans managed to grab one final stage win on the penultimate stage of the event before the final Power Stage showdown over the infamous Fafe. Evans would have more than 26 seconds in hand to Sordo, who had now pretty much excepted second place. 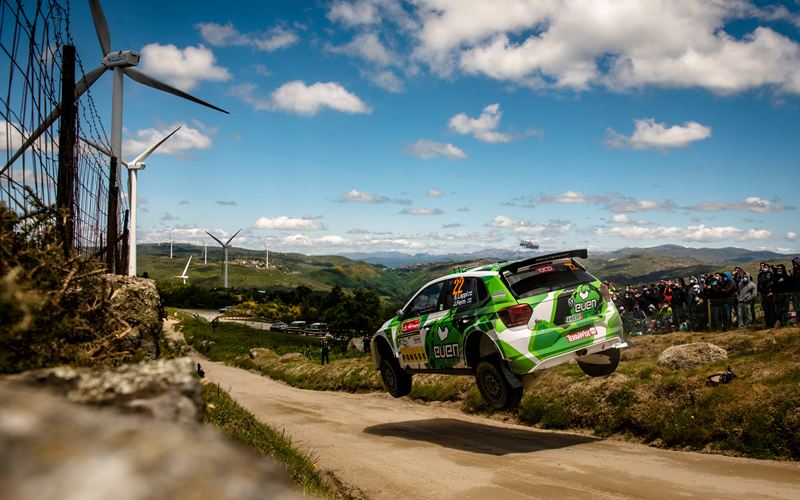 In the WRC2 class Esapekka Lappi had the perfect weekend in Portugal, finishing off his second rally win of the year with the final power stage class win. Lappi brought his VW Polo GTi R5 home over a minute and a half ahead of second-place Teemu Suninen in the M-Sport Fiesta R5. Following his opening day setback, Citroëns Mads Ostberg kept posting great times throughout, doing enough to secure the third spot on the podium.

“It was really a strong rally from us and our team did an amazing job. We didn’t have any problems with the car and on such a rough rally like this, it’s very cool. I am very satisfied.” 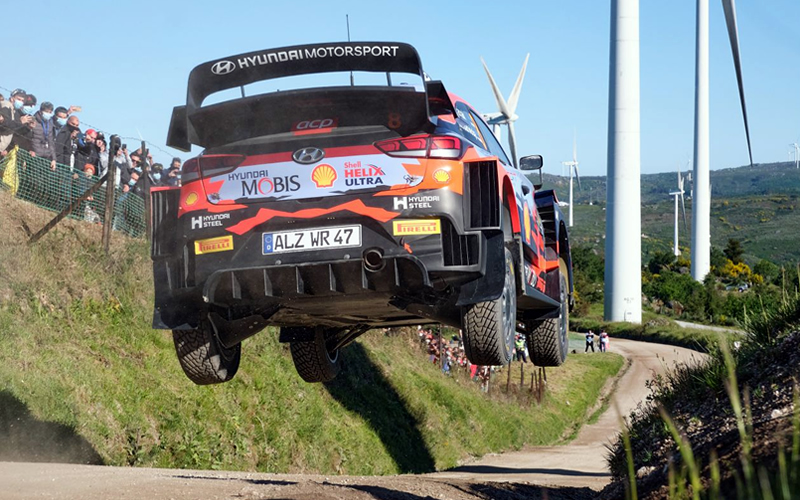 Ott Tanäk and Theirry Neuville both gave it everything in the final power stage, Tanäk just nipped the Power Stage win from his team-mate Neuville and they both at least leave Portugal with something. On what started off as a promising rally for Hyundai on the opening day, the results sheet is a disappointing read for not just the team but the two would be championship contenders. 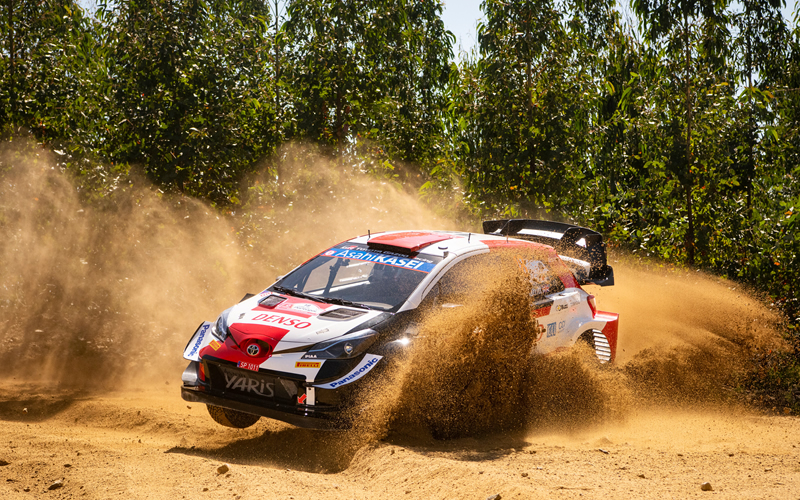 Japans Takamoto Katsuta secured his career-best 4th overall in what was a great drive in the Toyota Yaris, carrying further hopes onto the next gravel rally in Sardinia. Whilst teammate Sébastien Ogier secured thrid place on the podium to rescue what won’t go down as one of his best performances. 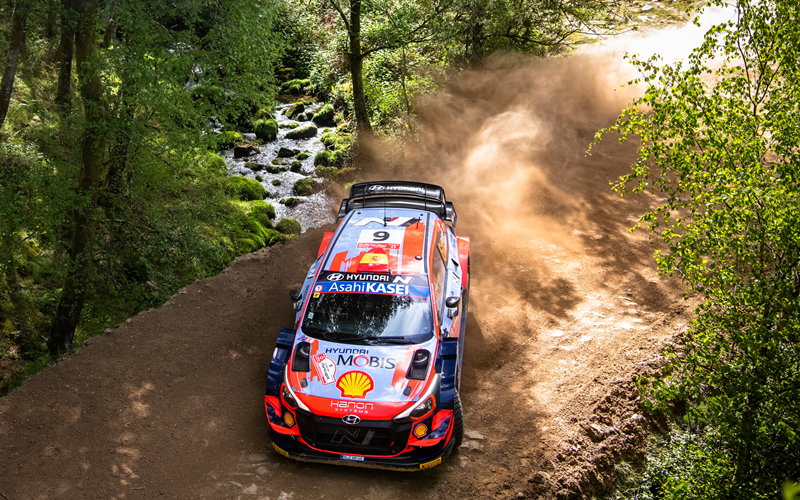 Part-time Hyundai driver Dani Sordo has competed in Portugal many times over the years, winner back in 2019 when the rally last ran. There was no real surprise that he would be a contender this time around, but while his teammates fell by the way, he continued to keep the pressure on, but ultimately risk versus reward earned him second. 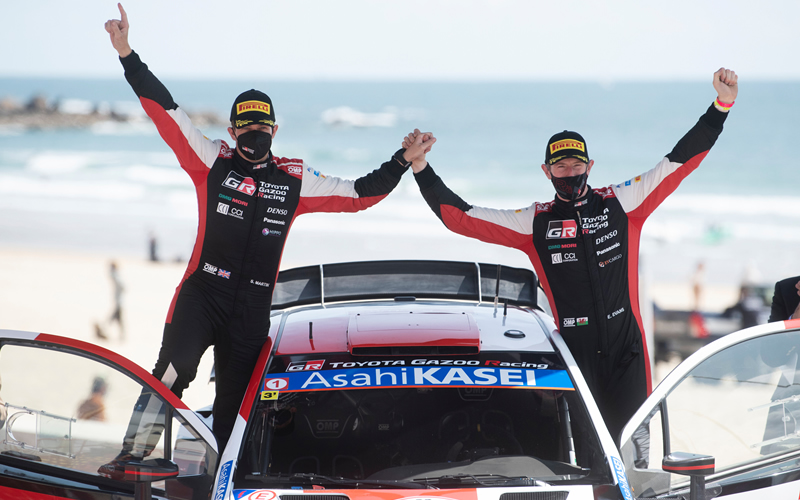 After coming so close to the victory last time out in Croatia, Elfyn Evan alongside Co-Driver Scott Martin brought his Toyota Yaris home for his 4th career win, Evans was also the 6th different Rally de Portugal winner in recent years. Perhaps not the fastest driver on the gravel this weekend, but Mr Consistent finally gets that first win of the year which is very much deserved. This win for the Welshman moves him up into second in the driver’s championship standings behind his team-mate Sébastien Ogier. This rally gives Toyota Gazoo Racing WRT a sizable lead in the Manufacturers’ standings ahead of Hyundai Shell Mobis WRT heading into Round 5, the second gravel rally in Sardinia on the first weekend of June.

“It feels good! We perhaps weren’t the fastest crew this weekend, but we had really good pace and kept out of trouble and obviously did enough to keep Dani at bay today. It comes at a good time, so I’m happy to take this one.”