Finally one of the greatest and most challenging rallies on earth has returned to the FIA World Rally Championships. After 19 years of absence, the iconic Safari Rally Kenya plays host to Round 6 of the 2021 Championship.

Last run back in in 2002, none of today’s current crop of drivers have ever experienced such an event. It is not the marathon event of the past, there are no bull bars or snorkels fitted to the current generation of World Rally Cars either but the challenge absolutely remains. 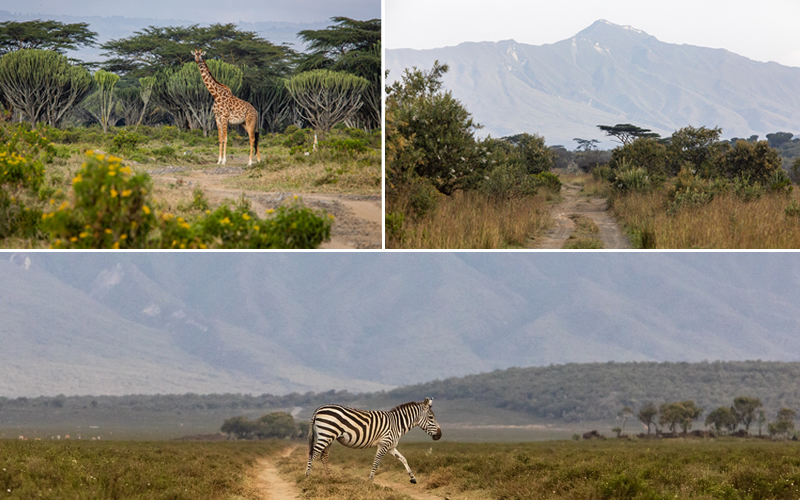 Todays modern version of this demanding rally is more of a sprint but to be fast is not the be-all and end-all. The worlds best must drive smart and to the conditions; because rough demanding roads awaited them in the truly amazing landscape to the southwest of the Kenyan capital Nairobi.

The rally kick-started on Thursday afternoon in front of the fans with a super special stage on the outskirts of Nairobi, where current championship leader Sébastien Ogier topped the timings. The rally reconvened Friday morning with a loop of three stages and opened with a slow narrow stage in the trees at only 13km in length named Chui Lodge, (Chui being the Swahili word for Leopard).

Ogier was first on the road reporting that it was a slippy test to start off with. Despite having a bit of understeer, it was Theirry Neuville who won that opening stage of the day, ahead of his Hyundai team-mate Ott Tänak. “The ruts were much deeper than on the recce, and I struggled a bit with understeer. The road is so narrow, so it’s difficult to find the good line, not an easy stage to start”

Behind the front runners, the first casualty had already unfortunately occurred. Oliver Solberg who was out for his second outing in the top-spec WRC Hyundai i20 since The Arctic Rally, had a huge impact. This damaged the rear corner of his Hyundai i20, ;e pushed on through to the end of the stage but the car was seen crabbing away from the stage end.

The next stage, SS3 Kendong was the longest stage of the rally at 32km in length and it delivered significantly more drama. First up Ogier had a bit of a moment early on, riding a bank at speed following a jump. At approx 8km he then went on to miss his breaking point and overshoot a junction. Rally leader Neuville also overshot at same at this junction but somehow he kept posting faster splits. 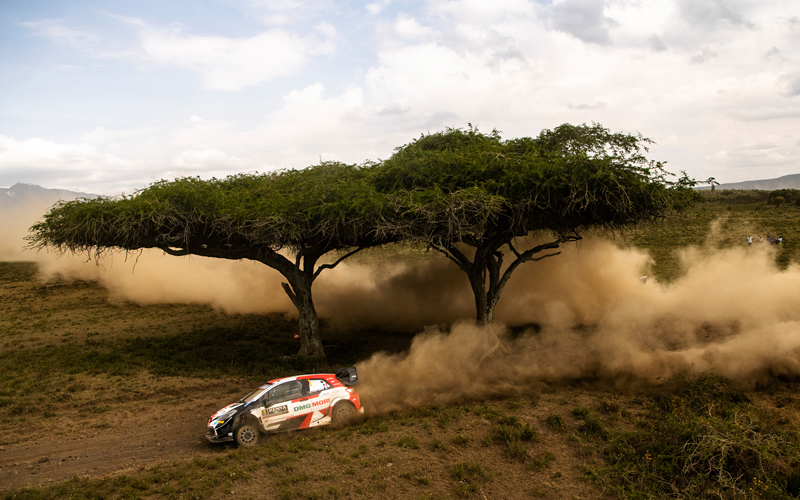 By the end of the stage, one of Ogier rear dampers had completely lost all of its fluid, leaving the rear of his Yaris bouncing around all over the place. But Ogier’s damaged Yaris was driveable and the least of Toyotas problems.

Elfyn Evans appeared to be going well until a risky line towards the end of the stage brought a premature end to his morning. The young Welshman clipped a big unsighted rock at the side of the road close to the end of the stage. It broke the front left steering, which ultimately put him out of the rally.

Neuville had another strong stage win to extend his lead over second-place Kalle Rovanperä, but clearly, Neuville was closer to the fine line of speed and survival. 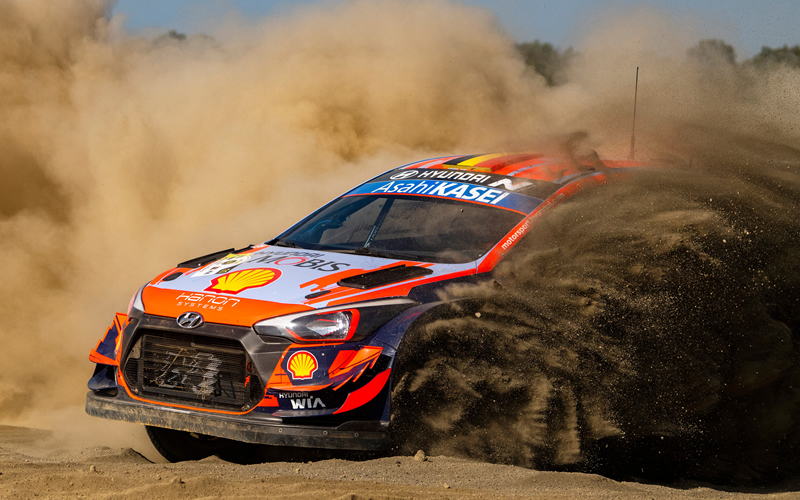 “I was close to rolling the car in the ruts at times. I think it’s possible to go faster but we need to survive.”

For Hyundai, Neuville’s speed up front was good but it was a concern for team boss Andrea Adamo. Neuville’s approach, however, was not the annoyance of the boss on this occasion, it was Dani Sordo. 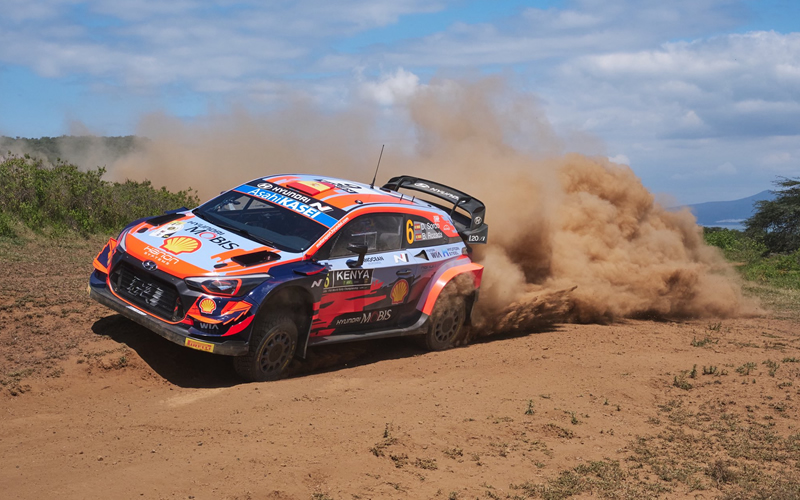 The Spaniard, as normal had clear instructions to bring home the points in Kenya, but a high speed off on this stage sent him spinning off and into the African bush. However on this occasion, unlike his retirement last time out in Sardinia, it wasn’t really driver error. Sordo had hit a stone on the racing line which broke the suspension arm, this loss of control sent him spinning into a slide and into retirement.

With one final stage to run of the morning loop, Ogier was left with no options but to nurse his wounded Yaris through the 12km Oserian stage in order to make it back to service. Ogier wasn’t expecting to suffer damage on the first run of these stages “I just had to make it through” he commented at the stop line. At least he would make it back to service to regather himself for the more rougher repeated stages of the afternoon. 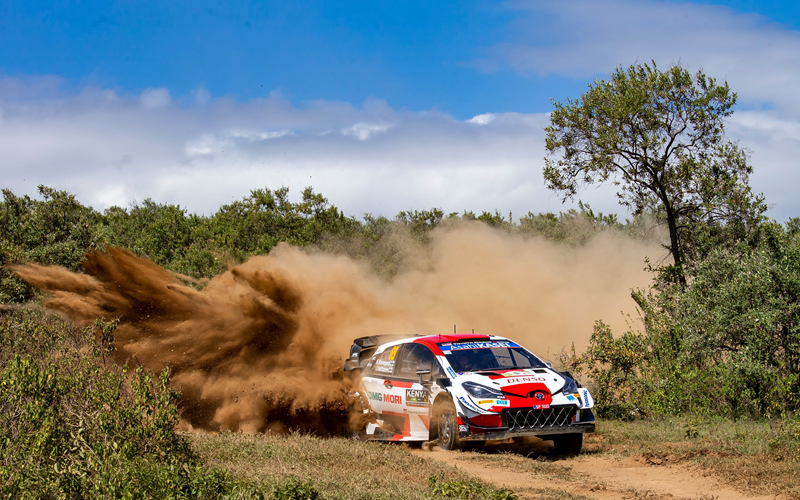 Ogier’s Toyota teammate Rovanperä managed to get the better of Neuville in the final stage of the morning loop to close the gap down to just 5 seconds heading into the midday service.

“That’s a big surprise. It felt really bad for me. The conditions here were driveable now, but it was a really tricky stage. If the time is good, it’s okay.”

The opening morning leg of this wild African adventure had already started to bite, but that’s nothing to what would ensue in the repeated afternoon loop. 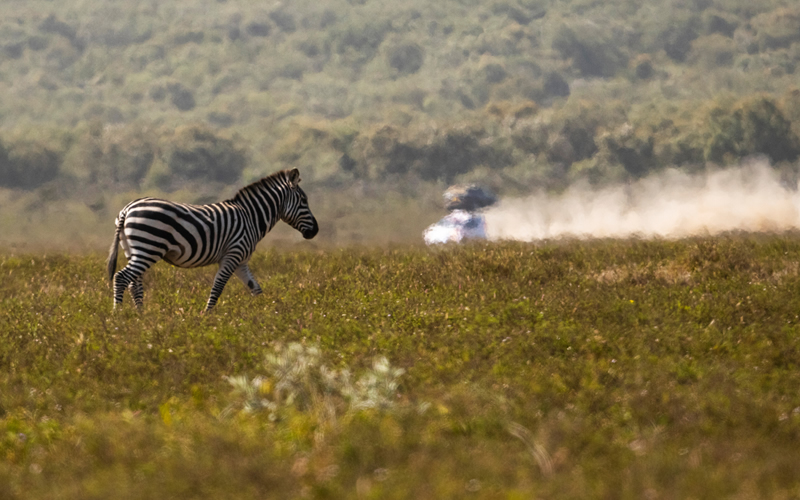 Back out after service and Ogier completed the Chui Lodge stage, but before rushing off from the finish line he said “Its even worse (than this morning)”. Rally leader Neuville was some 19 seconds slower on this second pass of the stage compared to his morning effort, showing just how much road conditions had evolved.

“The ruts are really deep, we are not able to get any speed as the car is bottoming out all the time, the cars are not high enough.”

Despite a stall on a hairpin (the one that caught a few drivers out on the morning run) Ott Tänak had beaten Neuville on this one. At the stop line, he sent a message back to the team indicating that the car was stalling all the time “What’s happening guys?” he said. Clearly, the Estonian was not happy and wanted the team back in the service park to know it. 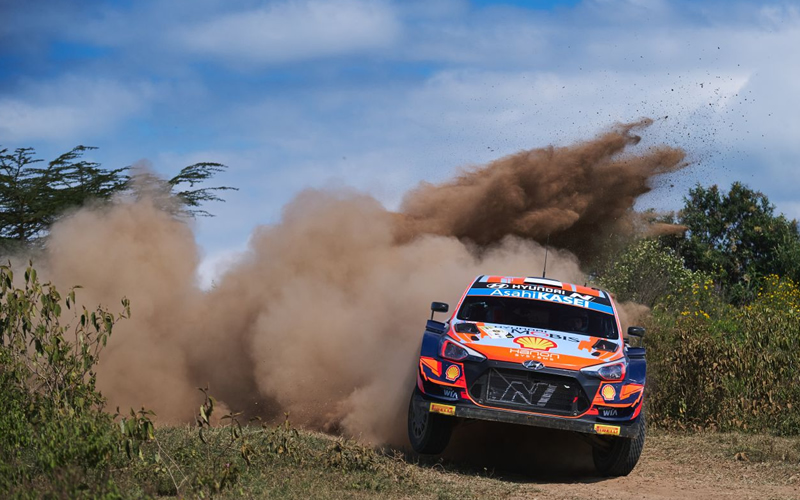 For Neuville, the concern was not his team-mate Tänak but instead Rovanperä. Entering the afternoon loop 5 seconds behind Neuville on the first stage of the afternoon, the young Finn snatched the lead of the rally from Neuville.

At the end of the second pass of the long 32km Kendong stage, Ogier was out of the car to look around and all he could comment was “Just survive it, it’s a very difficult stage”. 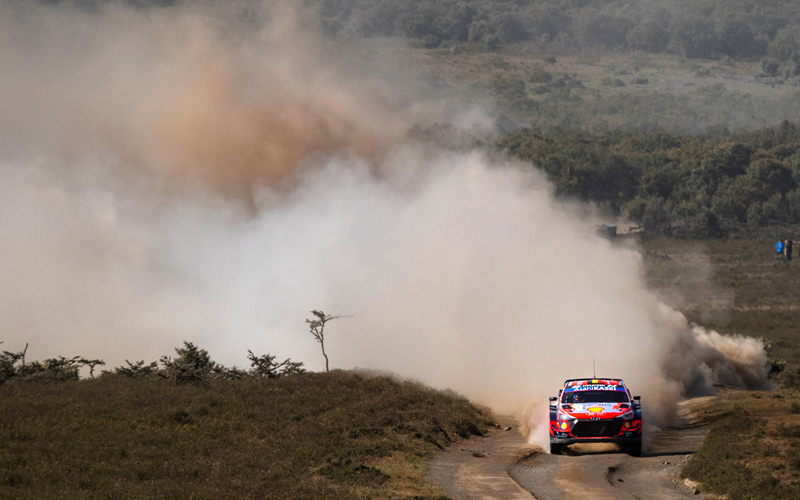 A charging Neuville picked up a puncture and the right rear tyre was off the rim by the end of the stage. A clear impact to the wheel rim could be seen, but as he reached the stop line it was as if he didn’t even know, commenting: “I tried to push, but was surprised to be slow at the end.”

Rovanperä was on the pace of Neuville for most of the stage but seemingly dropped off towards the end, losing the rally lead back to Neuville.

“I tried to be sensible, trying to avoid the rocks… it felt ok.”

On the final stage of the opening leg of the rally (SS7 Oserian 2) the carnage continued. Ogier reported, “Disaster in this stage, my radiator is blocked and it was over heating so we had to back off.” but he would however still post the fastest time 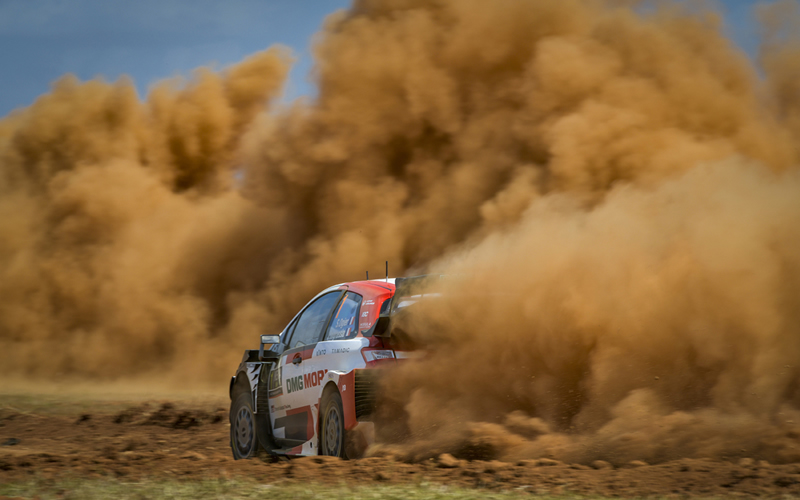 Neuville was losing time on the splits as his tyres had delaminated, by the time he reached the finish the font left had a puncture and the rear right’s rubber had completely gone from the wheel. All in all, he lost over half a minute and at this point in time, the lead of the rally was seemly being handed back to Ravanpera. Neuville’s teammate Tänak also picked up a puncture but managed to power on through to the end.

In this final stage of the day, the Fech Fech (Soft Volcanic Sand) would claim its first victim in Rovanperä who got stuck in it only 900m in from the start. He was unsighted by the dust and had to slow, but in his loss of momentum, the Yaris simple bottomed out in the ruts and was stuck. This stage interruption left everyone wondering if the Toyota crew could continue on or not. After receiving a tow out of the Fech Fech, the teams’ decision was to take a 10 min penalty and retire for the day, which was a smaller penalty than he would have received if he were to continue on. This was such a shame for the young Finn who hadn’t really done anything wrong.

And so at the end of this opening day of the Safari Rally, the lead remained with Hyundai’s Thierry Neuville who ended the day 18.8 seconds ahead of Toyotas Takamoto Katsuta. The Safari Adventure continues into the second day with a further 132km spread over another 6 gruelling stages which is going to be just as tough if not tougher than leg1.