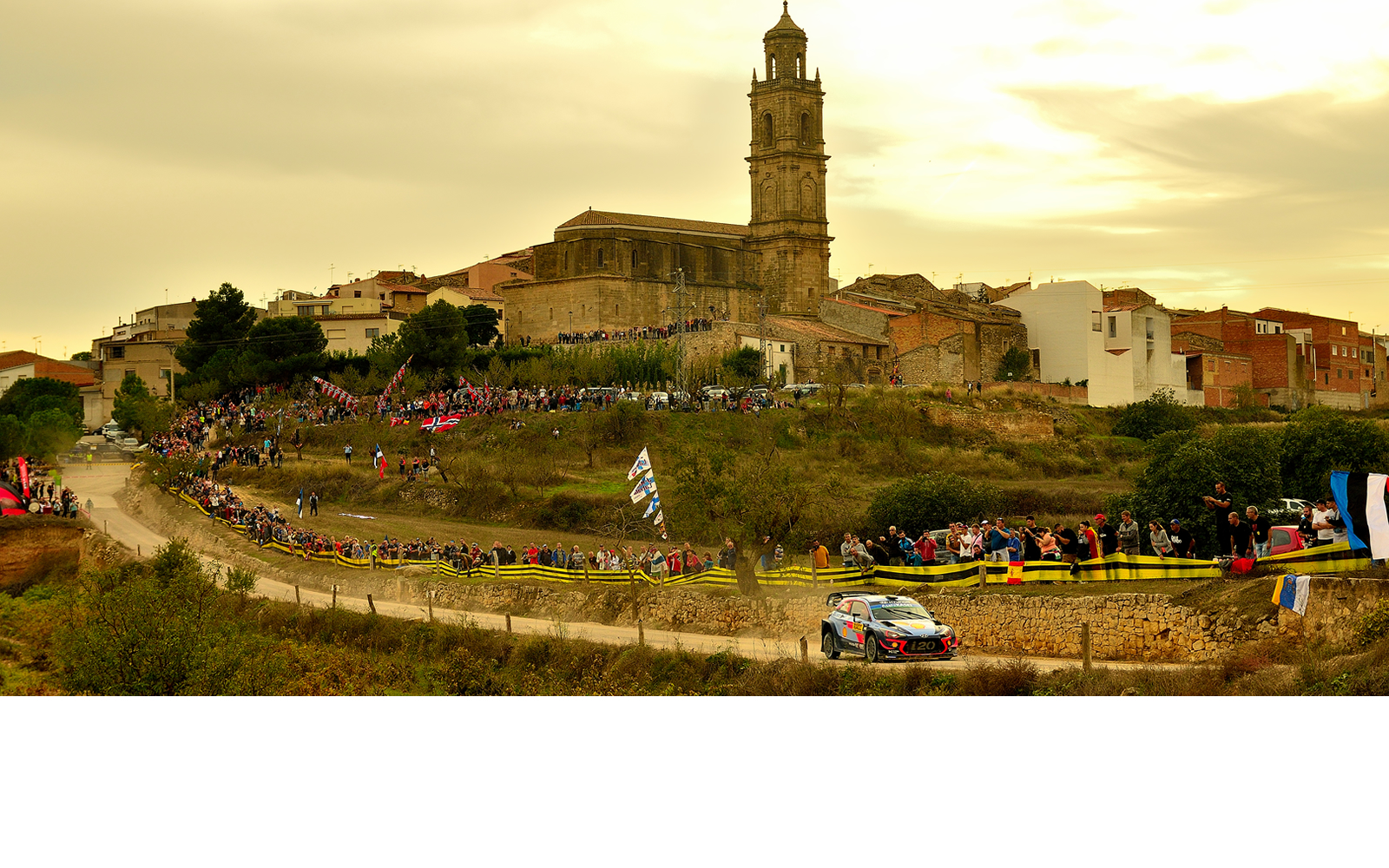 The 54th RACC Rally de Espania was the penultimate round for one of the most thrilling FIA World Rally Championships seasons in modern times. The Catalonian event-based about an hour away from Barcelona in Salou is THE ONLY mix surface event on the WRC calendar.

It was not only our return to this event but none other than “Le Maestro” aka “THE GOAT” (Greatest Of All Times) Sebastien Loeb’s. Another favourite WRC driver of the past also returning was Petter Solberg, who had just finished another epic season in the World Rallycross Championship competing in a winning VW team.  He was out for a joy ride in the all-new VW Polo R5 calling upon his years of experience and providing some development feedback for the car.

On the outskirts of Salou is a small area of wasteland which has been used as the events shakedown for a good few years. It is a small route which can have its spectator control issues and does have a few half-decent locations on the gravel section. With a tight and twisty section just before crossing over onto tarmac for a short blast on the smooth stuff, in all honesty, it does leave a lot to be desired, but one has to make the best of any given situation.

Reigning champ and M-Sport driver Sebastien Ogier topped the Shakedown times in the Ford Fiesta with his former VW teammate Jari-Matti Latvala in the Toyota Yaris by just 0.3 sec behind; while Ogier’s teammate Teemu Suninen then followed +0.8 sec. Title contender from Belgian Thierry Neuville managed to roll his Hyundai i20 on the approach to the final twisty gravel section and didn’t manage post a time in the top 10 of shakedown. The Hyundai mechanics then spend a good chunk of the morning patching up the i20 ready for SS1 which was a short blast around the Barcelona street circuit, this we choose to pass on.

The Friday loop of gravel stages were based out to the West of Salou, with regular Spanish gravel test; which can run in various routes returning this year. The morning kicked off with runs thru SS2 Gandesa, SS3 Pesells and SS4 La Fatarella. We choose to head for the midpoint of Pesells, which is to the west of Bot; where we found a nice downhill series of bends which transitioned from loose gravel to broken tarmac. This meant that we weren’t hampered by dust too much which was a bonus. Being the second stage of the morning we didn’t run into too many spectators but the ones we did were a lively bunch. We found that the mix of Spanish fans on cheap beer and French fans on the whisky proved rather entertaining, as we listened to them trying to communicate with each other. Estonian Ott Tanak was showing his intentions early on by leading the field after the first-morning loop in his Toyota Yaris.

After SS3 had finished we darted off aiming for the end of SS5 Gandesa which is on the outskirts of Bot to catch a few of the top crews before heading further north for the final gravel test of the day, SS7 La Fatarella – Vilalba.  Traffic was a little on the heavy side and it was soon obvious that many others had the same game plan as us. With some smart thinking, we followed the rally traffic route or the scenic route as we like to call it and just about managed to make it to Vilalba Dels Arcs just in time to dump the car at the side of the road and tackle the mass of fans that had gathered at this popular viewpoint.

With the iconic backdrop from the village and the now low sunlight, the sky was as colourful as the crowds who had lined the stage to watch the WRC machinery tear into the final bend of the stage. Tanak had ended the day ahead of local boy Dani Sordo in the Hyundai i20, who was providing the hype for all the Spanish rally fans that had all come out to cheer on their man. Championships leaders Ogier and Neuville were back in seventh and ninth, could this simply be them playing things safe on the loose stuff ensuring that they make it to the smooth Spanish asphalt which lay ahead of them?

Overnight the cars changed from Gravel Spec to Tarmac, the high suspension and knobbly tires were gone and the big wheels to house the large breaks were bolted on ready to hit the roads. Saturday morning came and so did the miserable weather, RAIN! This was not what the drivers wanted nor us who had trekked miles into SS9 Querol; which was supposed to be the second stage of the day following on from SS8 Savalla. However due to the large volume of fans who had overrun the village of Conesa the stage was canned on the grounds of safety, boy that was a close call as we had originally planned to head their first.

The Village of Conesa was heaving and the mass of rally fans were all a little on edge following on from the cancellation of the mornings run of this stage, fingers were crossed that everyone would behave themselves this time around. The gamble had paid off as the sounds from the first few cars echoed around the hills surrounding this very small village which had by now become a massive car park.

Although a tarmac stage, the final section beyond the hairpin at the village was a dirty loose surface which definitely tested the worlds best drivers who were on the wet tarmac tires. Tanak who had led the event on the loose stuff during Friday’s leg was hit by a front left puncture and had now been overtaken by fellow Toyota teammate Latvala now leading Ogier by 4.7 seconds; who had charged his Fiesta back up the leader board from seventh where he lay at the start of the day.

And so we headed into the final day and a cold one at that too, it was a loop of two stages just 30 minutes to the west of Salou which were repeated twice. Now the night before the organiser was putting out messages on their social media channels saying that all spectator area for all stages were full and this along with the rain in the morning, mixed with our fatigue did put us off venturing out first thing for the first run of the Riu-de-canyes stage but we did manage to catch a few of the top boys at the legendary roundabout before heading off to the airport to head home.

Seemly out of nowhere THE GOAT (The Greatest Of All Time) and nine times World Champion Loeb finished up on the top spot of the podium bringing the Citroen C3 home for the win (something that we’ve not seen very much of recently) ahead of fellow Frenchman Ogier. The now 44-year-old veteran of Motorsport was the only driver to take the gamble of the hard compound tyres.

Loeb “To win after almost six years is incredible, but to do so in a battle like this, where you only discover after the finish line that you have won, is amazing. I never believed I would win again.”

What a rally and what an end to our Motorsport season!