Australian driver Chris Atkinson won the second round of the 2019 Americas Rallycross (ARX) Championship for Subaru Motorsports USA by making a last corner overtake on the inside of Steve Arpin for the victory at the inaugural ARX of Gateway at World Wide Technology Raceway. 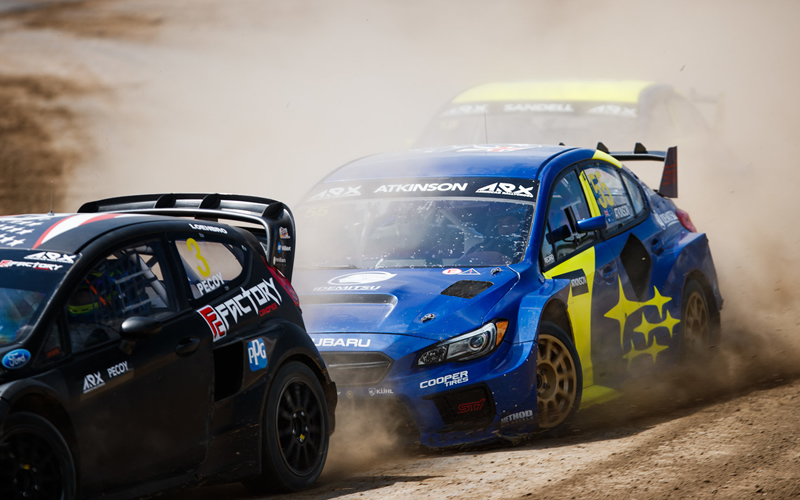 Atkinson won the six-lap final from the back row of the grid, with the hole-shot taken by front row starter, Arpin. The Loenbro Motorsports Canadian driver beat pole-sitter and ARX Championship points leader Scott Speed into the first turn and led the race until the very last corner when he was passed by the No. 55 Subaru WRX STI of Atkinson.

Although Arpin’s Ford Fiesta ST spun across the finish line, he finished second, as Sweden’s Patrik Sandell crossed the line third to take his first ARX podium and the first double-podium in ARX history for Subaru. TQ (top qualifier) driver, Speed, challenged Arpin for the lead on the first lap but dropped back with technical issues and was passed by both of his teammates on Lap 3, but he finished fourth due to problems for Loenbro Motorsports’ Travis PeCoy and Andretti Rallycross’ Tanner Foust. 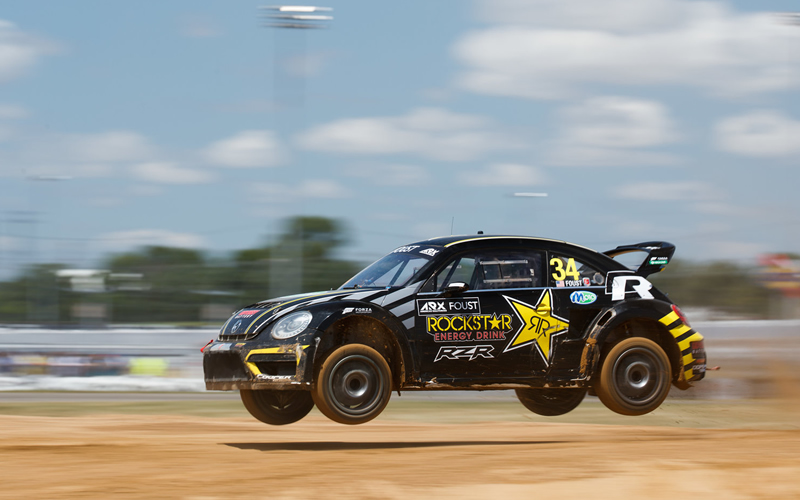 Former rallycross champion, Foust made a quick launch from the second row of the grid but was spun by contact with Atkinson and retired from the final. The Loenbro Motorsports team had to work flat-out between semi-final two and the final after PeCoy retired on track in the semi from contact at the joker lap merge with Sandell that broke the Fiesta’s steering. He made it onto the final grid with seconds to spare. The other 2019 ARX Supercar freshman, Cabot Bigham, had a race-long battle with Atkinson in the semis but just missed a place in the final.

“I said to the team leaving the grid ‘we have nothing to lose, let’s see what happens’. I started off on the front row last time [Round 1 at Mid-Ohio] and finished last; started on the back row this time and finished first. I couldn’t believe it when I came out we were third and I was attacking as hard as I could and I could see Steve [Arpin] up the road and I just kept on charging. For me, I really closed the gap after I landed hard off the jump. I made a big impact and I was right on the edge and I could of gone up the inside but I sat right on his bumper and as he went into the left [Turn 12], his car kicked right and there was a bit of a gap there and I just basically put my door up the inside and got a bit of traction on the inside of the track. It wasn’t a push, I was either sitting back thinking I wouldn’t drive him off the road or do anything, but the door opened and I slid my car up the inside. It’s my first victory and the day we had I thought ‘Why not give it a go in the last corner?’

Patrik Sandell became Subaru Motorsports USA’s third different Americas Rallycross (ARX) Championship race winner in as many rounds by driving his Subaru WRX STI to victory in Round 3 of the ARX of Gateway double-header at the World Wide Technology Raceway. 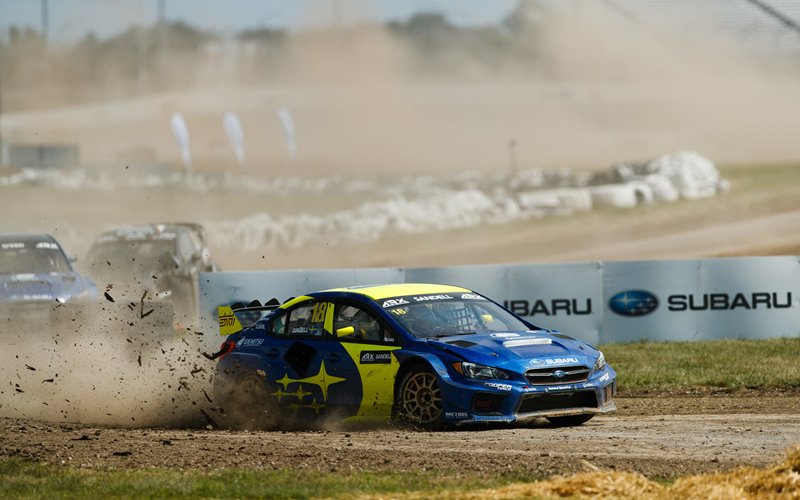 The Swedish driver followed up teammates Scott Speed and Chris Atkinson’s victories in Rounds 1 and 2 with a comfortable victory on Sunday, leading the final wire-to-wire. Speed himself sealed a Subaru one-two finish, charging from the back row of the grid following a difficult semi-final and then resisting late pressure from Andretti Rallycross’. 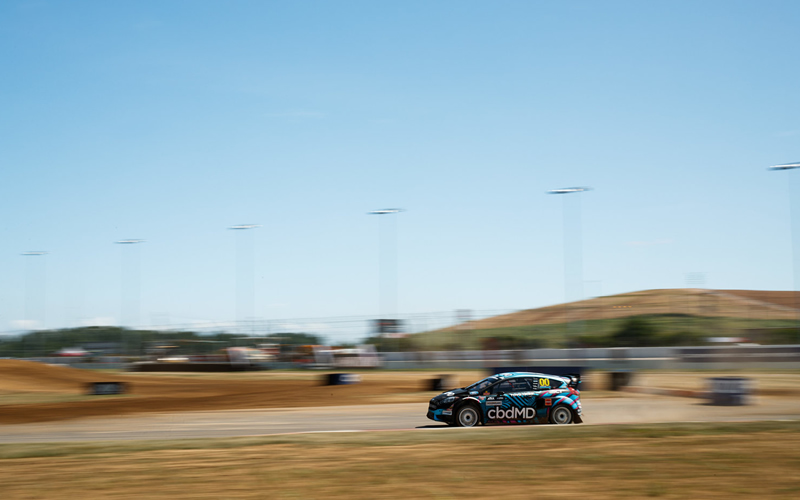 In the searing afternoon heat, Sandell lined up on the front row of the final alongside Loenbro Motorsports’ Steve Arpin. The Canadian set out to put the disappointment of narrowly missing out on victory on Saturday behind him. It was Sandell who took the hole-shot, with Australian driver Chris Atkinson making a fast start from the second row to try and go around the outside of No. 00 cbdMD Ford Fiesta ST of Arpin into the first turn. Arpin fell back into the clutches of Foust’s Volkswagen Beetle R and with Scott Speed trying to sneak up the inside of the pack and Atkinson was forced wide, which also cost Loenbro Motorsports’ Travis PeCoy ability to contend with the rest of the field. 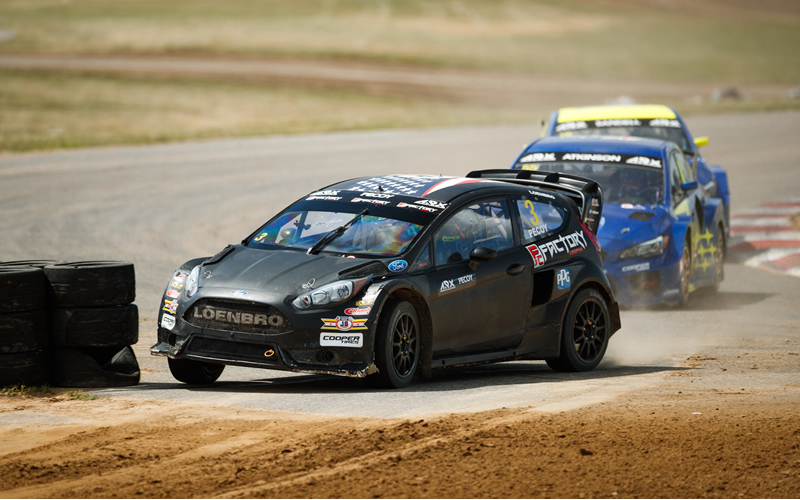 Atkinson would finish fourth, but the damage sustained on PeCoy’s car after contact with a tire stack impeded the 18-year-old’s vision, making him run wide onto the grass and out of contention on Lap 2. PeCoy made the grid for the start of the final after a collision with a tire stack at the end of the second semi-final, damaging the front-left corner of his Fiesta. 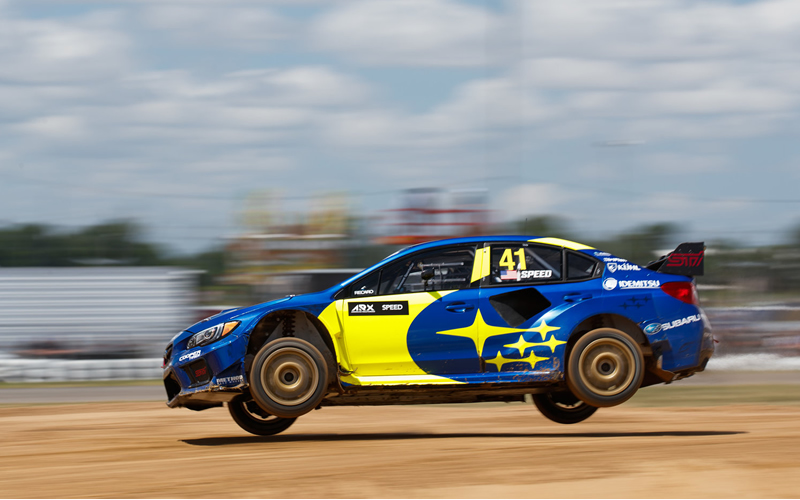 Speed took his joker on Lap 3 of the final, ahead of Arpin, who would later fall behind Saturday’s winner Chris Atkinson into fifth after all of the six drivers completed their joker laps. Andretti Rallycross’ Cabot Bigham finished seventh after making a mistake on the final lap of his semi-final, running wide and letting Speed’s Subaru WRX STI through when it looked like the points leader might miss out on the final.

“It has certainly been a special year with Scott [Speed] joining the team and he brought some good ideas in order to help us reach the next level and together with Subaru and Vermont Sports Car, we have done a fantastic job together. To be able to accomplish what we set out to do at the beginning of this year, in three races with three different winners that are all-Subaru is such an amazing feeling and I really feel a part of the best team in the paddock, and I am so pleased with that.”

On the brand-new rallycross circuit at WWT Raceway:

“The track has been absolutely awesome. It’s the most fun track in the series, even going back to the previous series in America. It’s so much fun in the fast dirt sections; it did get a little bit rough in the end in a few places, but nothing really major so it was such an awesome weekend, thanks so much to the organizers who put on this event and I really hope we can come back here next year.”

ARX is a North American-based rallycross championship fielding action sports stars, world-class manufacturers and competing in premier locations around the continent in three levels of racing, ARX, ARX2 and ARX3. ARX is the next evolution of the high speed, action-packed world of rallycross. Rallycross is the fastest-growing form of racing in the world. Short races, viewer-friendly asphalt and dirt circuits with 600 brake horsepower production-based racecars make for exciting racing and is suited to the way we enjoy sports today. IMG, the global sports and entertainment agency is the promoter and commercial rights holder of the series