It was with great anticipation that the opening round of the 2018 Toyo Tires MSA British Rallycross Championship which was to be held at Silverstone on the all new RX track was upon us, signifying the first time for competition use. Everyone from the humble spectator to the drivers & teams, from championship organisers to the venue owners Silverstone themselves, were all eager to see how the track would perform in action and how to the venue would fair up with a Rallycross event.

In the lead up to the start of the new BRX season, social media was alive with little snippets of news being fed out creating a little buzz in the air; this included announcements that Manx rallying ace Mark Higgins would contest the whole season in an Albatec racing prepared Peugeot 208 RX backed by Eddie Stobart Logistics, Five-time Toyo Tires MSA British Rallycross Champion Julian Godfrey in the Spencer Sport prepared Mitsubishi Mirage RX Supercar and the Voice of World RX Andrew Cooley (The FIA World RX TV Commentator) would compete in a Suzuki Swift. 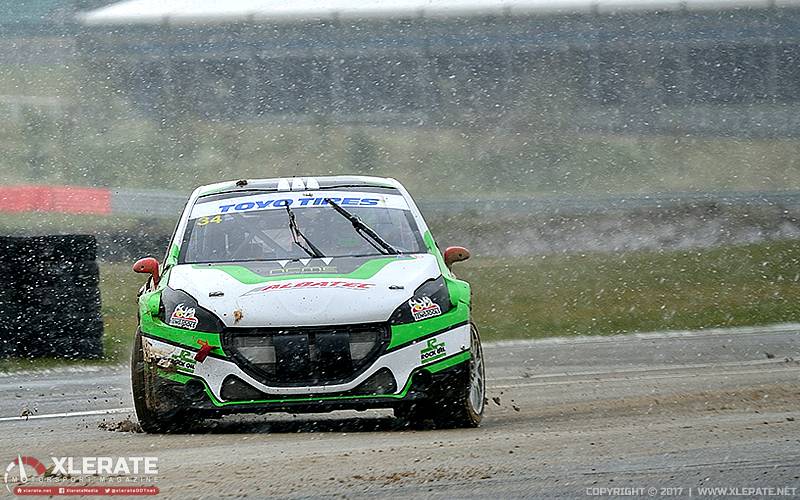 The circuit will also host Britain’s round of the FIA World Rallycross Championship at the new Speed Machine festival in May and so when Silverstone was added to the national BRX championship calendar it prompted a number of international entries from a handful of forward thinking drivers from the WorldRX. This opportunity to gain some knowledge of the new track beforehand could prove to be invaluable and we were surprised that more drivers did not get in on the act. 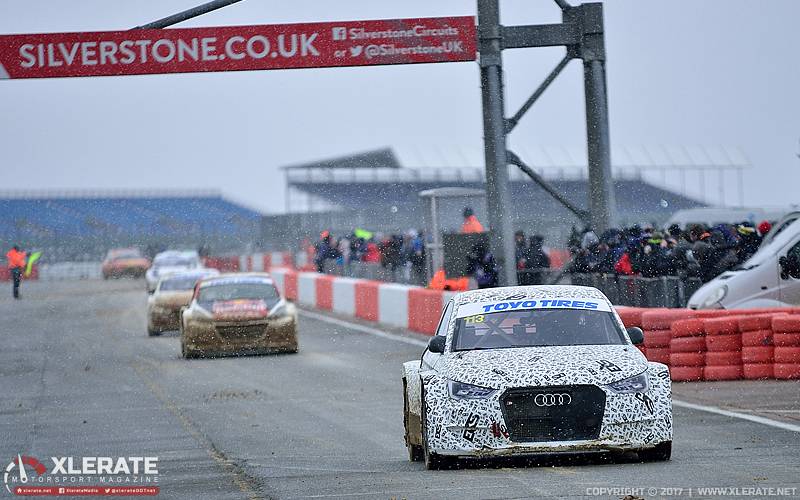 Fresh from his World Rally Championship (WRC) outing in Mexico with the Citroen, Seb Loeb jumped into the Peugeot 208 WRX Super for a shakedown alongside fellow team mate Timmy Hansen. They were also joined by WRX rival Andreas Bakkerud who put in a last minute entry in order to test out his new seat in the EKS Audi S1 and Guerlain Chicheri who was keen to get some seat time in a Renault Clio RS. 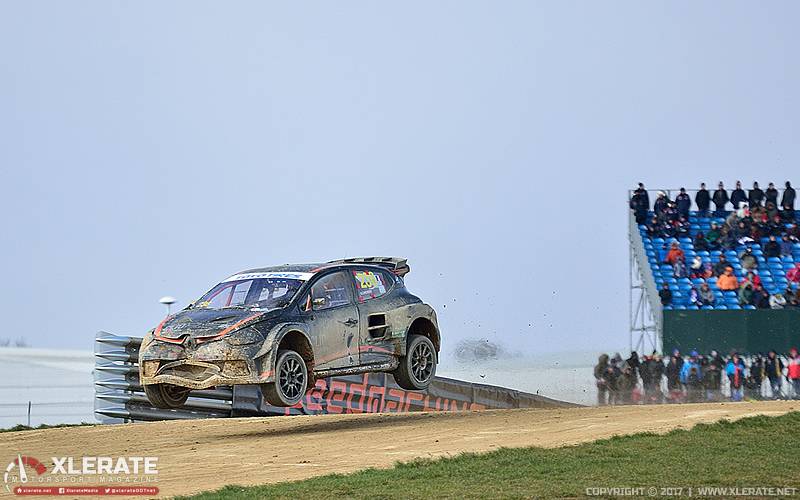 In bitterly cold conditions with the added hindrance of snow showers the event got underway with a few practice laps. Everyone set out cautiously as they sized up the track, in search of identifying any potential over taking places, finding those all-important lines and breaking points. Turn one (at the top end on the long start/finish straight) identified itself early on as being a bit of a tricky one to negotiate, even when not in a pack of RX cars steaming into it under race conditions it caught out a couple on the practice laps, some even slamming into the wall. 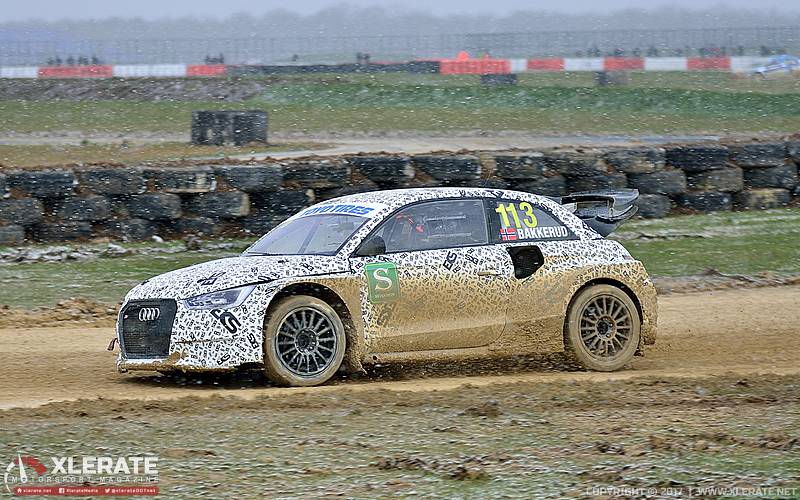 Bakkerud was getting to grips with the EKS Audi S1 pretty quickly, he was visibly hot on the pace topping the leader board in all three qualifying sessions, with Loeb in second and Hansen in Third. On the BritRX front Kevin Procter was the best of the rest in qualifying ahead of Mark Higgins who was going pretty well for a first time outing. Julian Godfrey appeared to be having a bit of an on and off start to the day only managing 8th, which just goes to show that years of built up track knowledge simply could not be called upon here; as everyone was in the same boat having to learn this new circuit. 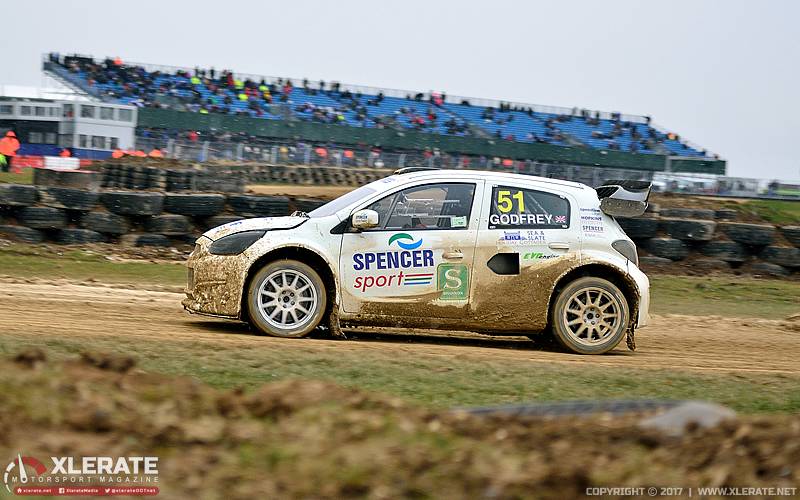 As the day progressed the weather seemed to be just relentless, it really was pretty grim to be standing out in all day, so all credit to the marshals and the die-hard RX fans that stuck with it, they were however being rewarded with some great racing. The track was very muddy with a stodgy feel on foot, some of the tight turns, particularly turn 7 resulted in some of the front wheel drive cars bogging down in parts; while the more powerful super cars just spun their wheels power sliding their way around. Inevitably this muck transferred onto the tarmac sections where the track transitioned across the surfaces, the joker lap was getting pretty grubby. 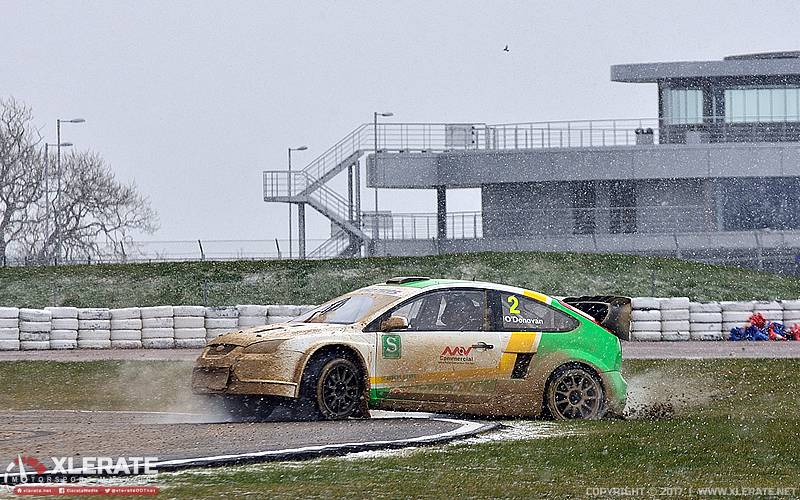 Semi Final 1 looked to be the toughest gig of the two groups, British RX competitors Mark Higgins, Andy Grant, Steve Hill and Mad Mark all had to try and keep up with the pace of Bakkerud & Hansen, SF1 finished with Hansen beating king of the Q’s Bakkerud with Higgin & Hill both making it thru to the final. Loeb ran away with the win in Semi Final 2, more than 20 seconds ahead of the fastest BRX driver Procter; Godfrey and Thomas also made it into the final, I think the likes of the international guys spurred on the BritRX guys getting them to up their game a bit. 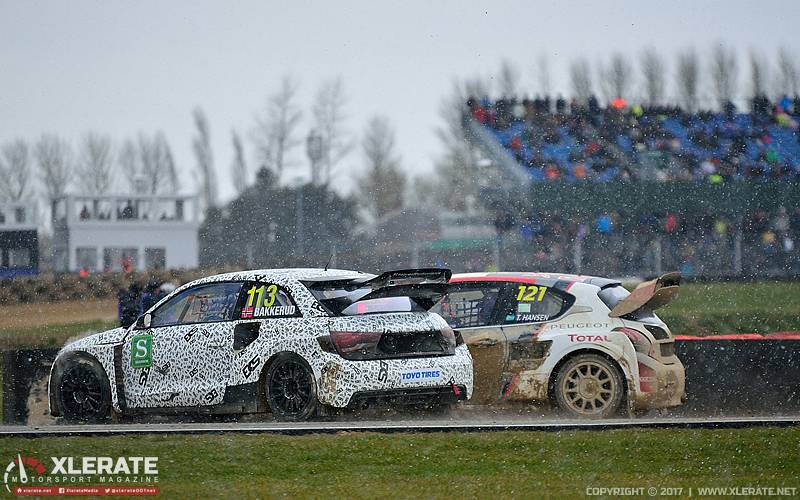 And so we make it onto the final for the first ever Rallycross meeting to be held at Silverstone on the new RX circuit. The name to be written down in the history books for this momentous occasion was a man that is no stranger to writing history pages, Seb Loeb. Team mate Timmy Hansen propped him up in second and Andreas Bakkerud rounded off this international star filled podium. Julian Godfrey brought it home for the top BRX honours showing that the Spencer Sport team know how to prep a Mirage not only for stage rallying but now Rallycross also. He was ahead of Hill and Thomas, unfortunately Higgins & Procter both ended the final with a DNF. 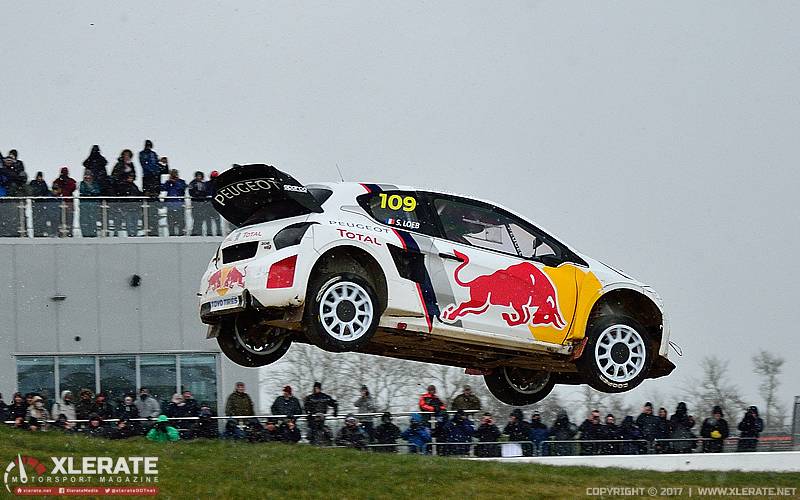 Pretty much as soon as the super car final finished the place emptied out of spectators, the draw of a warm car heater on full blast was ever so tempting after what was a pretty grueling day of Motorsport spectating, sometimes one has to question the sanity of us folk that stand out in weather conditions such as what was experienced…. Are we all mad?