The final round of the first-ever Titans RX Series took place at Estering. Just 9 points separated Kevin Hansen and Timmy Hansen with Toomas Heikkinen a further point back with 100 up for grabs due to the double points nature of the final round. 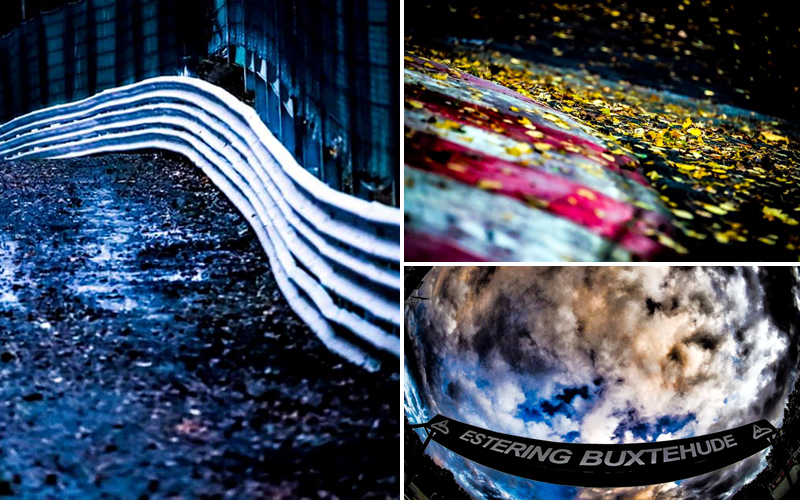 Joining the championship for the final weekend were local drivers Rene Munnich and Mandie August with Oliver Webb returning to the series after missing the previous round. World Rallycross race-winner Kevin Eriksson also joined the 15 strong field and was expected to challenge for victory on both days. 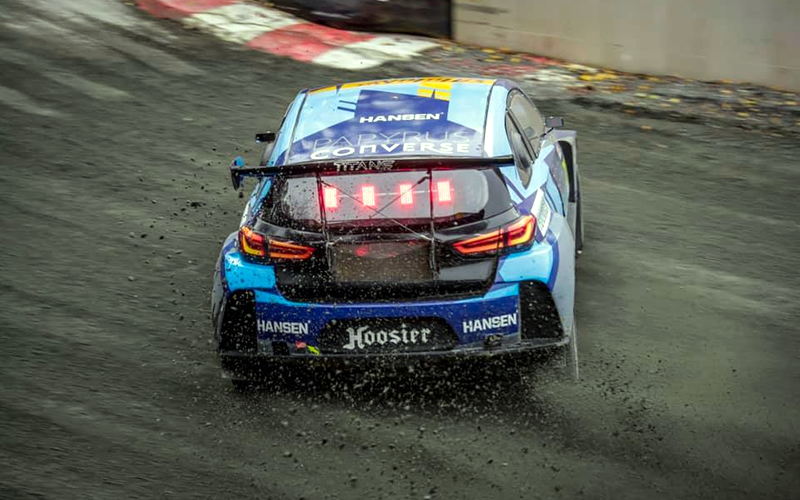 Timmy Hansen won Saturday qualifying after topping every session. His brother was his closest challenger while Tamara Molinaro got her best ever qualifying performance with 3rd. Toomas Heikkinen was just ahead of newcomer Kevin Eriksson while Jerome Grosset-Janin continued his good form with 6th. CsuCsu held off regulars Ronny C’Rock and Andreas Steffen with Rene Munnich just ahead of Abbie Eaton and Mandie August. Werner Panhauser once again missed out on making the semi-finals by just 3 points with Oliver Webb a further 4 behind. Reini Sampl had a day to forget and finished last in all his races to round off the table.

“That was f***ing brilliant. My adrenaline level is wow. I mean to be honest I had a good day so far. It’s a bit of a rollercoaster here.”

“A mixed qualifying for me. I cannot get out from the line quick enough. It’s pretty close.”

A large amount of rain fell just before the semi-finals after a completely dry qualifying. No driver had any experience of wet weather running at the German circuit. 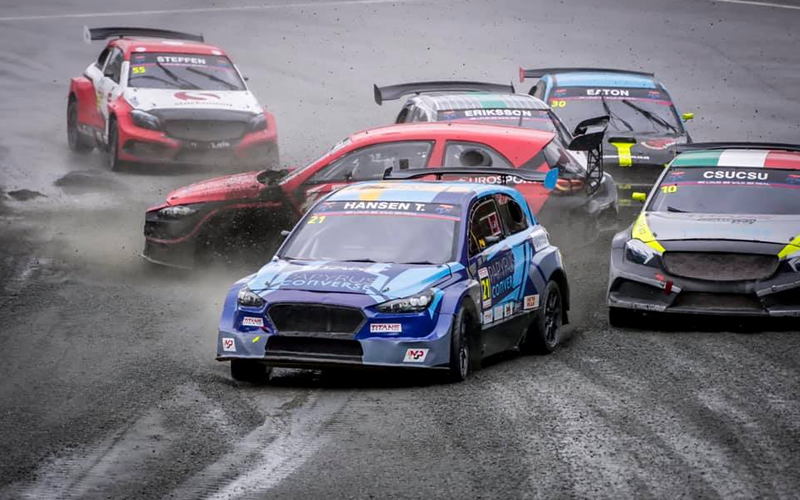 CsuCsu made the best start with Molinaro spinning across the pack after making contact with Eriksson as the Italian cut across him on the run to turn 1. Steffen hit CsuCsu and both stopped at turn 1. Race leader Timmy Hansen slid off the road at turn 2 but recovered out of the gravel to continue in 3rd. New leader Eriksson held off Abbie Eaton despite numerous contacts between the pair. Timmy tried to pass Eaton by diving up the inside of turn 1 halfway through the race. This pushed the female racer wide but she held on round the outside as the pair came side by side down the back straight. However, she braked too late into turn 3 and crashed into the banking retiring on the spot. Molinaro also went off at the same point moments later. This meant CsuCsu inherited 3rd and the last spot in the final with Eriksson stayed out front.

“It was very slippery. I was a bit cautious in the beginning. I’ve never driven this car on wet not the rain tires. I didn’t have a clue. I was just taking it step by step, lap by lap trying to find more speed. You feel so bad when you’re driving these conditions but it was good enough to win the first semi.” 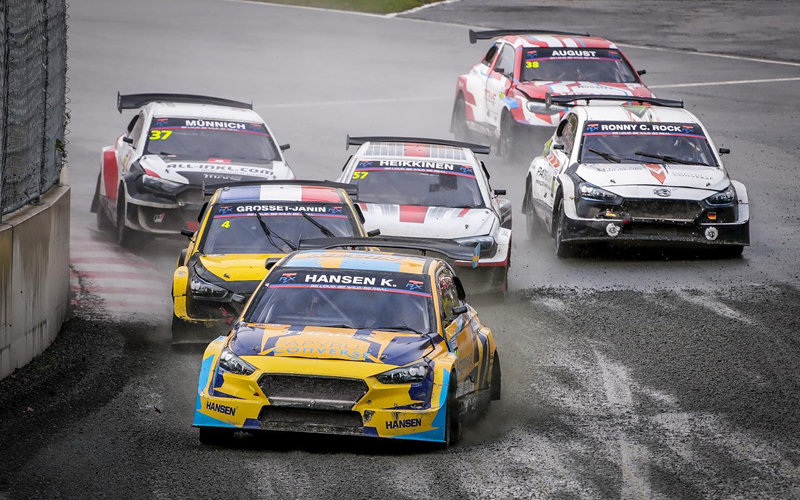 Pole man Kevin Hansen got the jump on the field into turn 1 with Topi slow to get away almost dropping to 4th but managing to just keep 3rd place. Jerome tried to overtake Kevin into turn 3 after going side by side but backed off to retain 2nd. Ronny C’Rock was in 4th with Rene in 5th and Mandie August in last. Ronny ran wide out of the final corner so Munnich tried to go round the outside of his fellow countryman into turn 1. After being tapped wide he stopped just short of the barrier and had to reverse before continuing in last. Mandie August would later stop on track with an issue. With just over a lap to go Topi dived up the inside of Jerome into the penultimate corner securing 2nd while Kevin kept his lead to take pole for the final.

“It was an intensive race. I lost the start again. A lot of wheel spin. In general we are P2 and now we’re heading to the final where the points are. It’s going to be interesting, I guess.”

At the start on a damp track, the field went 4 wide out of turn 1 which saw Eriksson and CsuCsu come together. The pair both spun with CsuCsu stopping sideways across the track causing a red flag while Eriksson crawled back to the pits unable to make the restart. For the rerun of the final, Grosset-Janin made the best start but Heikkinen managed to cover off the Frenchman to hold second just behind Kevin Hansen. Coming out of turn 1 the Swede lost drive and saw Topi take the lead with Kevin’s brother Timmy almost stopping at turn one.

On the next lap, Jerome challenged Kevin for 2nd place and overtook out of the tight turn 1 hairpin. In quick succession championship rivals, Timmy and Topi stopped on track, the latter from the lead with suspension failure. This left just 2 cars to battle it out with Kevin unable to pass Grosset-Janin as he took his first Titans RX win. Despite not finishing Topi climbed onto the final step of the podium but Kevin extended his championship lead to 14 points with 50 to play for. 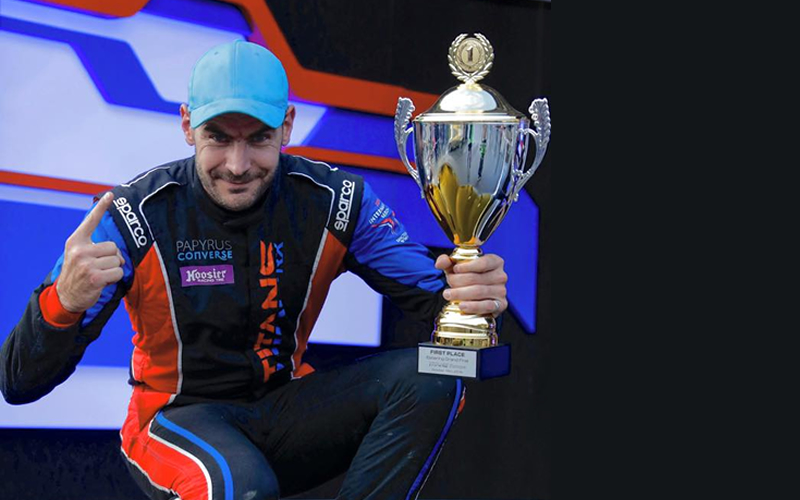 “During the race there are two things. I was fast and I was there at the end so I’m very happy about that.”

At only the second time of asking Kevin Eriksson won qualifying at the Estering circuit. Despite only winning one race this was enough to hold off the challenge from Heikkinen and Timmy Hansen. Kevin Hansen was close behind with the top 4 separated by just 9 points. Grosset-Janin was in 5th ahead of Steffen, C’Rock and Webb. The female pairing of Eaton and Molinaro were tied on points with the Brit being ranked ahead based on qualifying times. CsuCsu and Rene Munnich were the last drivers in the top 12 with Panhauser, August and Sampl missing out on the last semi-finals of the year.

“I was far away and now we’re getting closer. It was really nice qualifying for me. I really enjoyed the drive because my car was so nice to drive. It was easy to follow others.”

“It’s super enjoyable on this track. I really had to work ever lap to find where the grip is.”

Like the previous day, between qualifying and the semi-finals, a large amount of rain fell making the circuit even more slippery.

Kevin Eriksson held the inside up to turn 1 with Timmy trying to go around the outside but after contact between the pair Eriksson held onto the lead. Behind, Grosset-Janin hit CsuCsu wide while also clipping the back of Timmy and slotted into 3rd. Abbie Eaton and CsuCsu came together at turn 2 with the Hungarian holding the slide and keeping the inside line into turn 3. At turn 1 on the next lap, Eaton tried to dive up the inside but hit CsuCsu and stopped before being hit by Ronny as well. The pair lost too much time and meant the top 3 stayed as they were for the rest of the race with Eriksson holding off a hard charging Timmy Hansen.

“I barely saw a thing inside the car. The only way to stay on track was to keep on Kevin’s bumper. I had to fight hard. Ofcourse, I tried to pass as well because in the lead you have a good vision. In the last lap I lost a few metres and it was hard to drive without his reference. It is very tricky conditions.”

Heikkinen made a slow getaway giving Kevin Hansen the lead. Oliver Webb tried to go around the outside but ran wide and slotted into 3rd. Andreas Steffen almost spun coming out of turn 1 but stayed ahead of both Tamara and Munnich. Over the next few laps, the positions stayed as they were until the final lap when Steffen crashed into Webb at turn 2 with Steffen retiring on the spot and Webb losing 3rd to Molinaro as well as the last place in the final.

“I lost the start and I tried to be behind but unfortunately I couldn’t see enough that I couldn’t pass him. It was just my fault that I missed the start. I couldn’t catch the grip.”

Ahead of the final race Kevin Hansen needed just a 3rd place finish to secure the crown if Timmy won and 4th if Topi took the victory. Rain began falling leading up to the last start of the year soaking the already soaked circuit.

Heikkinen made the best start from 3rd but Kevin Hansen took the lead after covering off the rest of the field. Trying to go around the outside, Molinaro was pushed into the wall as Timmy rose up to 3rd with Eriksson slotting into 4th. Jerome cut underneath Tamara to take 5th. Topi was all over the back of leader Kevin Hansen but on lap 3 the Finnish driver’s bonnet fly up forcing him to stop so it would go back down. On the next lap Timmy ran wide out of turn 2 and was forced into the wall after contact with Grosset-Janin. This damaged his suspension slowing him to a 5th place finish while Topi went off the road and dropped 30 seconds behind the leader in last. With all his championship rivals out Kevin Hansen secured the championship and by holding off Eriksson on the final lap completed this with his 4th win of the season.

“12 out of 12 podiums and to secure the championship with a win is amazing. I had a good fightback. I had a bit of a struggle in the quali’s but then the semi and the final in my start were perfect.”

With a near-perfect weekend combined with a torrid pair of rounds for his brother and Topi, Kevin won the inaugural Titans RX series title by 35 points with Timmy overhauling Heikkinen by a single point. With a double podium, Jerome finished best of the rest 62 points ahead of Tamara Molinaro.

The championship will continue with the same format next season with more sustainable cars. A calendar is yet to be released but new venues are expected as well as many returning tracks.