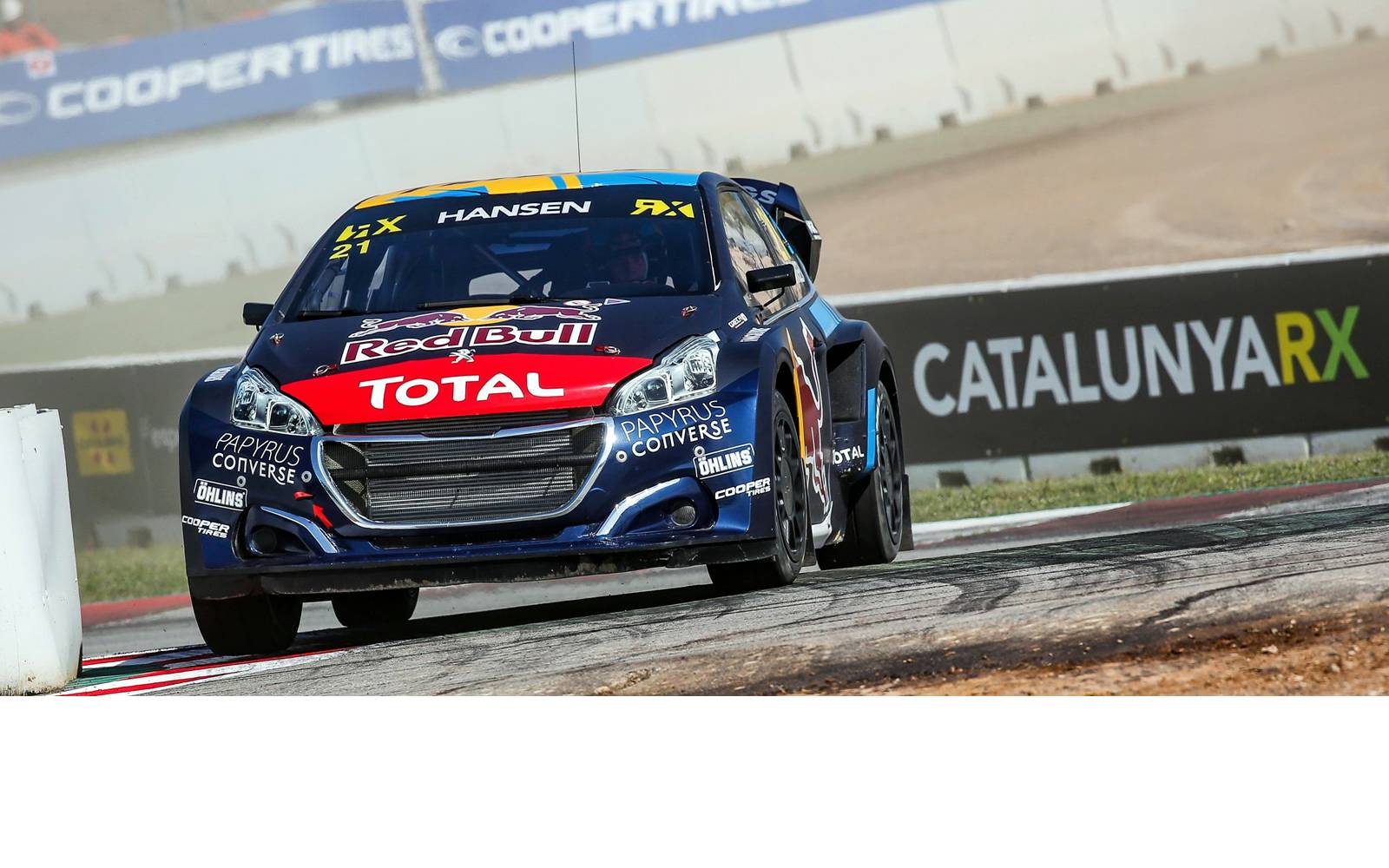 Nineteen drivers arrived in Spain at the Circuit De Barcelona for Round 2 of the FIA World Rallycross Championships, The World RX of Catalunya. Being held slightly later on in the year, the weather was a lot better compared to the wet conditions that were experienced here last year.

Kevin Hansen leads the standings heading into the first European race of the season but following on from the round 1 antics, brother Timmy and RX Cartel driver Andreas Bakkerud were both keen to get their campaigns back on track.

On the slightly revised circuit layout, it was Bakkerud who topped the free practice session in his Audi S1 on Saturday morning. Bakkerud posted a best lap time of 0:45:000 just four-tenths of a second faster than the man whom he had THAT coming together within Abu Dhabi at round 1, Timmy Hansen.

As the drivers lined up for the first race of Q1 the track conditions were good, nice and dry with a clear line which had started to appear following the earlier free practice session. Anton Marklund despite taking to the grid in his Renault Megane RS failed to start the race but in Lap 3 Hervè Knapick rolled his Citroen DS3 resulting in a red flag.

The re-start was delayed while the rule book was checked by the stewards to see if Marklund was allowed re-start; unfortunately, it was a no go for him. This left Kevin Hansen and Cyril Raymond to go head to head, Kevin taking the first win in Spain and setting the benchmark time of 3:12.325.

Race 2 was a bit more like it, Timur Timerzyanov took the win in his Hyundai i20 ahead of Liam Doran in the Audi S1; while Oliver Bennett hit the gravel trap on Lap 3 with broken steering to his Mini Cooper.

Britain’s six-time Olympic Cycling Gold Medalist, Sir Chris Hoy got his first taste of World RX off to a false start in Race 3, a jump start handed him two joker laps removing him out of any potential battle here. Although he didn’t get the best start, Timmy Hansen still won this heat, beating his brothers time and posting what would be the fastest time of Q1 – 3:11.628.

From the same grid position as Hoy, Guillaume De Ridder also flagged a jump start in Race 4 with Janis Baumanis taking the lead sideways into turn 1. Opting to take his joker on the final lap Baumanis lost the lead and the heat win to Bakkerud on the merge.

From Q1, it was the Hansen brothers on top, Timmy led Kevin with Timerzyanov in third.

As Q2 progressed it was clear by the times in Race 1 that the track had evolved. Knapick was unable to progress following his Q1 roll and Chris Hoy, although looking a little more relaxed, again struggled to get to grips with his Fiesta. A late call for his joker on lap1 plus a stall and small spin just before the finish line left him shaking his head. Marklund won this first Q2 race ahead of Bennett which meant they now had both finally posted a time following on from their disastrous Q1.

For race 2 Timo Scheider had a fresh set of shoes on his Seat Ibiza and boy did that help, he won the heat ahead of Rokas Baciuska in the ES Sport Skoda Fabia, Baciuska led the whole race but lost out on the final lap where he chose to joker.

By race 3 it was clear that the track was getting progressively faster, from the off Liam Doran gave it full throttle and tried to go around the outside of the pack, this, unfortunately, didn’t work out for him and Cyril Raymond led into turn 1. Krisztián Szabó eventually getting the better of Raymond for the win in this one.

The final race of Q2 was between the front runners from Q1. Timmy Hansen dominated the race, repeatedly setting the fastest lap time of the day. Timmy takes the overall lead heading into day two ahead of brother Kevin with Timerzyanov in third.