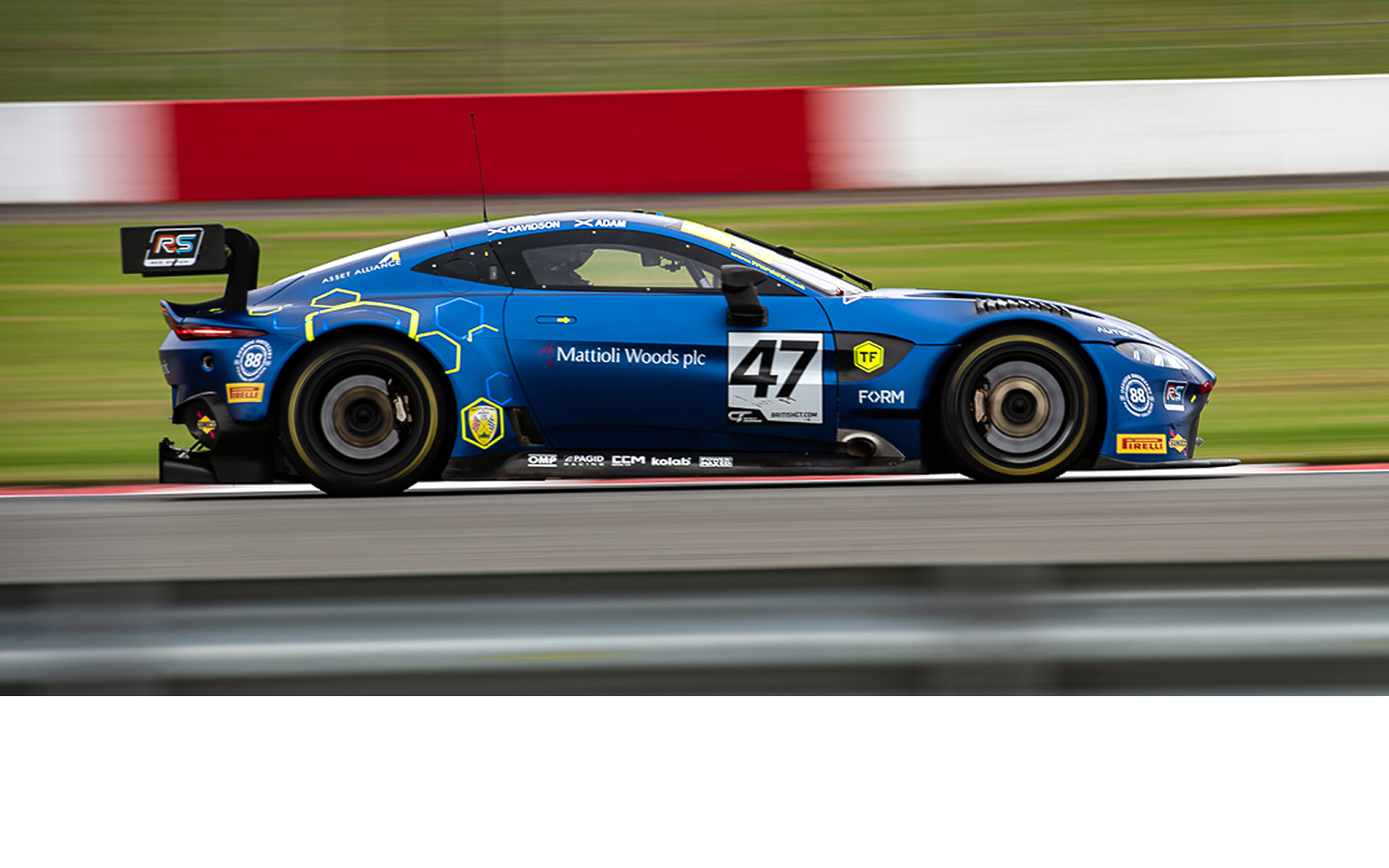 The final round of the British GT saw the series return to Donington where a number of teams and drivers could still drive away with the British GT title depending on various permutations. Going into the final weekend of the season Adam Balon and Phil Keen headed into the weekend sitting atop the championship with a six-point lead. Keen had been in the same or similar positions over the past few seasons, heading into the final round as favourite. Previously luck had conspired against him and he has never walked away with the championship trophy, would this finally change this weekend? Graham Davidson and Jonny Adam sat behind them in second position in the TF Sport run Aston. A further five and a half points behind them and with an outside chance of winning the overall title were Sam De Haan and Jonny Cocker. In the GT4 championship, Tom Canning and Ash Handheld a decent points advantage over Callum Pointon and Dean MacDonald in the HHC run McLaren.

Saturday’s qualifying saw Shaun Balfe and Rob Bell take pole position. A great drive from Balfe in the Am side of the camp saw them get first position by 0.6 seconds. The weekend was looking good for the championship leaders of Balon and Keen, putting their Barwell run Lamborghini Huracan in second place, with their nearest championship rivals starting in fourth. Adam and Davidson would also have to serve the maximum success penalty in the pits owing to their victory in the previous round.

The Steller Motorsport Audi topped the times in GT4, with the championship protagonists of Canning and Hand in second, their nearest rivals MacDonald and Pointon in third, with Maxwell and Priaulx, the other championship hopefuls, in fifth in their Multimatic Mustang.

The drama started before the race had even got underway, the number 19 Mustang collided with the Team Parker Mercedes on the formation lap meaning the start was delayed. The Mustang was towed away and the Mercedes appeared a number of laps into the race after sustaining pretty heft damage. The incident meant the start of the race was run under the safety car, so when the green flag waved the cars would start the race in single file rather than the normal side by side start we normally see.

Balfe used the safety car start to pull away from the others and establish a lead, just behind them championship favourites in the Lamborghini were overtaken by Ian Loggie in the Ram Racing Mercedes. Moving Loggie up to second and demoting Balon to third just one place ahead of their main championship rivals. Angus Fender in the Century BMW then started to make progress from fifth, overtaking both Davidson and the Balon to move himself up into third position, dropping the two main title rivals back into fourth and fifth.

One of the first decisive moments of the day came just a few laps later, Balon was trying to get past the GT4 KTM and got slightly blocked, as he cut to the inside to try and pass, the second Century BMW was there, sandwiching the Lamborghini between that and the KTM. Although it looked an innocuous touch, it allowed Davidson to also get in front of their rivals, and soon the Barwell Lamborghini was dropping further and further down the GT3 pack.  With the bit between his teeth, Davidson was right on the tail of Loggie in third place after he made an off-track excursion just after the Old Hairpin. Before the mandatory stops, Davidson had managed to get past and move up into third.

In GT4 The Stellar Audi and the TF Aston had pulled quite a gap on the rest of the field. The main rivals of the Aston for the GT4 title had dropped a few places down the field, and more importantly, Canning had built up just about enough of a lead to negate their ten-second success penalty during their pitstop. Just before the mandatory pitstop Tom Canning finally found a way past Richard Williams and set about trying to build as much of an advantage as possible.

Soon after the stops, the curse that has befallen Keen in so many of the previous year’s struck again. The damage incurred in the earlier knock trying to get past a back-marker had caused something to break on the Lamborghini. Keen was helpless as the car went straight on at the Craner Curves and he had to tenderly drag it back into the pits. After everything had settled down, Adam was in fourth position and now had the championship lead over the Barwell Lamborghini.

The GT4 battle for the championship was hotting up after the stops. Fielding had emerged in the lead in the Stellar Audi, dropping Ash Hand in the TF Sport Aston into second. Seb Priaulx had managed to catch up with the Aston due to not having to serve a time penalty. Priaulx then managed to move ahead of Canning setting up a nervous final part of the race. If Priaulx moved up a position, or Hand dropped a place then the championship would go to the Multimatic Mustang in its first season in British GT.

A safety car helped to bunch the pack up after a big shunt as Connor O’Brien went straight on at the Craner Curves rejoining the pack in front of Aaron Taylor-Smith who had nowhere to go and T-boned the Aston. Despite the bunching up the positions stayed the same for the rest of the race, meaning Tom Canning and Ash Hand would win the overall GT4 title.

There was even more drama before the end of the race in GT3. In the final few minutes, a very racy looking Denis Lind in the WPI Lamborghini fancied his chances against Adam. He tried to cut back on the inside of the Aston but misjudged it, twice, catching the rear end of Adam and managing to get in front of him.

More importantly, the damage had slowed the Aston and allowed the other championship hopeful in the Barwell Lamborghini driven by Cocker to get in front. If the positions were to stay the same then they would win the championship by a mere half a point. This is the way it would stay, but sadly the championship would not be won on the track. A post-race investigation deemed the manoeuvre by Lind on Adam to be a little too robust and earned them a five-second penalty dropping them back behind the Aston, and ultimately giving Adam and Davidson the title.

Another great British GT season was over and once again Keen must be wondering what he has to do to get the British GT title, going into the final round for the past three seasons as favourite only to have the championship taken away by matters which did not involve him.  This is to take nothing away from Adam and especially Davidson who after the first few races did not look like they were going to be anywhere near title contenders. Davidson has put in many impressive first stints over the season to push him and his teammate into a position where they could challenge for the title.

The weekend and the season belonged to TF Sport and Aston Martin. TF picking up the overall drivers championship in both GT3 and GT4, and the Aston Martin driven by Martin Plowman and Kelvin Fletcher picked up the Pro/Am honours in GT4.