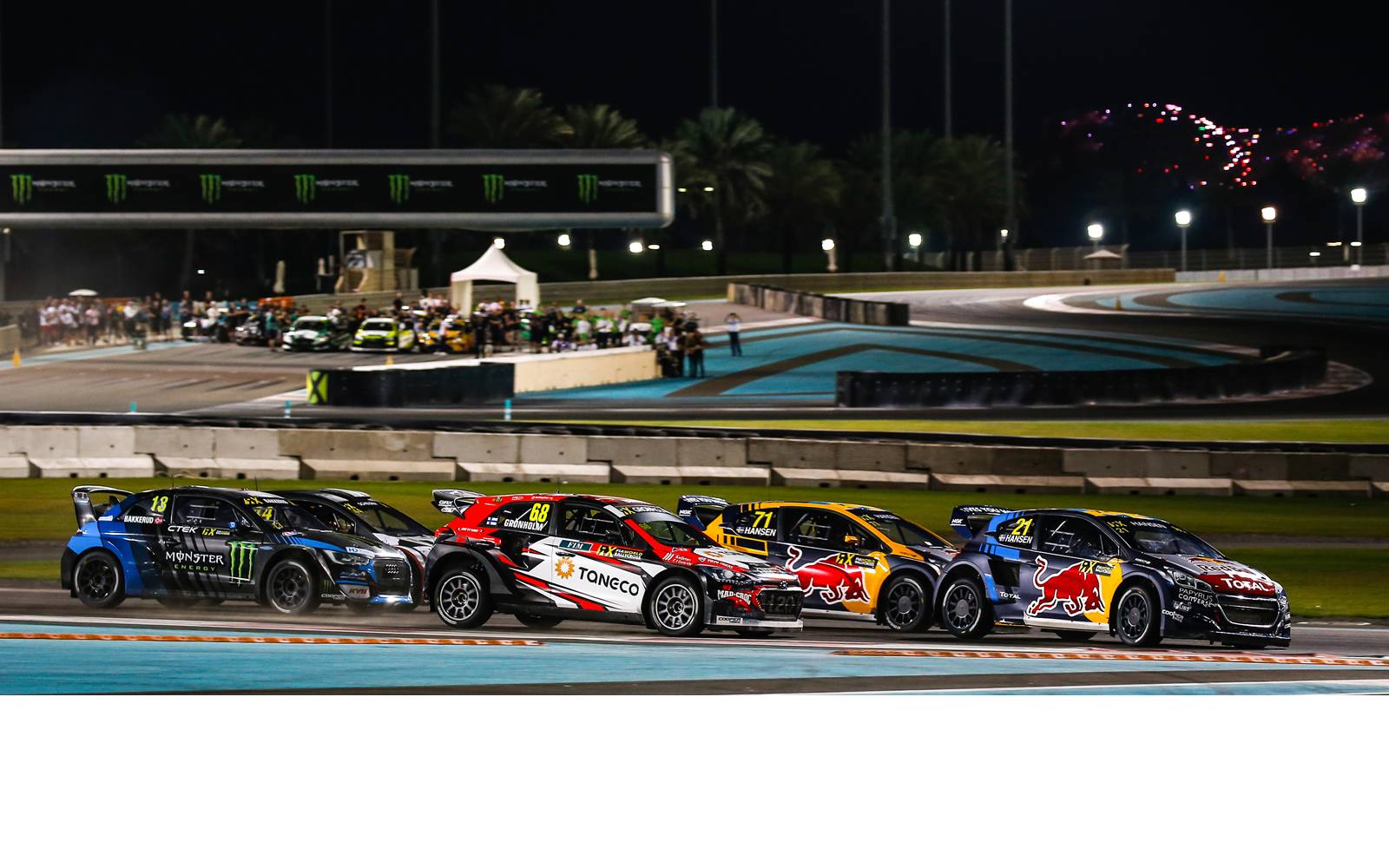 It was another hot day at the Yas Marina Circuit in Abu Dhabi for day two of the first round of the World Rallycross Championship and it was more like an RX War Zone with battle scars across Q3 and Q4 for many and that was before the finals were even in sight.

The first race of Q3 started off with a roll from Britain’s Oliver Bennett on lap two, those big curbs enough to send his Mini Copper up and over onto the roof. Maybe he was being a little bit too greedy with his cut? This DNF was the end to his miserable event and left Guillaume De Ridder and Pal Try to battle it out, De Ridder eventually taking his first-ever WRX race win in the Renault Clio RS.

In race 2 the first turn saw contact between Liam Doran and Timo Scheider but it was Timur Tierzyanov in the Hyundai i20 who beat Scheider by a mile. Race 3 was a clean run for Kevin Hansen who was way out in front of the rest, taking the win in his Peugeot 208. So far it was all a little bit scrappy but that was nothing compared to what happened in Q4.

Following on from their little bit of handbags on day one and their verbal exchange during the end of day press conference, Timmy Hansen and Andreas Bakkerud were to come to blows again, this time it was in a huge way.

Bakkerud was right up the back of Timmy Hansen all the way around the first couple of laps, Bakkerud went for the Joker first on Lap 3, whereas Hansen left it until Lap 4. As Timmy came off of his Joker lap Bakkerud slammed into the side off him in what Bakkerud described as “The Biggest Impact of his life”, both drivers were winded by the blow, but ok.

Timmy managed to crawl around the final lap to take the win still and Bakkerud had stopped due to the considerable amount of damage to the front right of to his Audi S1 but what about Timmy’s 208? Brother Kevin helped him out of the damaged car and into his arms as Timmy’s tears started to flow, he knew that the damage sustained to the roll cage would put him out of the race. So that was it then, all that hard work in winning Q1 & Q2 was now all for nothing and gone were his chances of being the first winner of the year

With only 30mins until Q4 there were questions over whether or not the EKS mechanics could repair the damage to Bakkeruds Audi in time. They just about gaffer taped it up to make it to the start of Q4, but it was all in vain as he was later disqualified from the race.

Bakkerud apologised to Timmy and the Hansen team explaining that he simply messed up his race laps, thinking it was the final lap thus coming in far too hot for what he thought was the finish line.

The rest of Q4 was a lot calmer with wins from Anton Marklund, Timo Scheider and Kevin Hansen who won Q4 overall with the fastest time of the weekend. Bakkeruds teammate Liam Doran benefitted from the exclusion, he then progressed into the semi-final.

The first semi-final race launched off of the start line with 6 cars steaming into turn one, but Rainis Nitis took the launch control a bit too literally.  The pack of cars forced him wide and straight into the high curb which launched his Hyundai i20 up onto the roof of Anton Marklund’s Renault Megane RS, ripping the rear wing off in the process. Nitis who was the only driver in the semi-finals to have won a World RX round was now disappointingly out.

Liam Doran and Timur Tierzyanov had a proper ding dong battle on the final lap, racing corner to corner in the fight for third place but it was Doran who made it into the final, his first since Hockenheim 2016. Kevin Hansen crossed the finish line first with Timo Scheider side swiping the wall as he crossed the line in second place.

Niclas Grönholm had made his first-ever pole for the second semi-final but he somehow bogged down his Hyundai i20 getting a poor start off the line. At the back of the pack with him going into turn 1 Cyril Raymond was up on two wheels, once again thanks to that high curb, a puncture from this then forced his retirement from the race.

Grönholm made a late decision to joker in search of some clear air but as he merged back onto the mainline he made contact with the Skoda Fabia of Rokas Baciuska. The result of this contact forced Grönholm offline and he ended up cutting the corner.

Despite having a poor start Grönholm crossed the line first, ahead of Janis Baumanis with Krisztian Szabo in third also making it through to the final.

And so we arrive at the first final of this new season, Kevin Hansen was on pole with his brother Timmy watching and spurring him on from the sideline. All six finalists steamed into turn one, the only drama here was that Doran nudged that curb but he was ok and continued on to be rewarded with a surprising third spot on the podium.  After nearly not making it into the finals he will be pleased with his result, he celebrated by skidding over the finish line with a big doughnut.

At the front, it was Kevin Hansen and Niclas Grönholm all the way, and on lap 4 Grönholm nudged his way past to take the lead causing Kevin to oversteer slightly dropping back into second. Both Grönholm and Hansen jokered at the same time, but Kevin couldn’t get back at Niclas and so they both crossed the finish line under a stewards investigation pending.

The result of that steward’s investigation was that Gronholm would receive a 3-second penalty for the contact handing the first win of the season to Hansen.

Round 2 of the Championships moves to Europe to Barcelona.