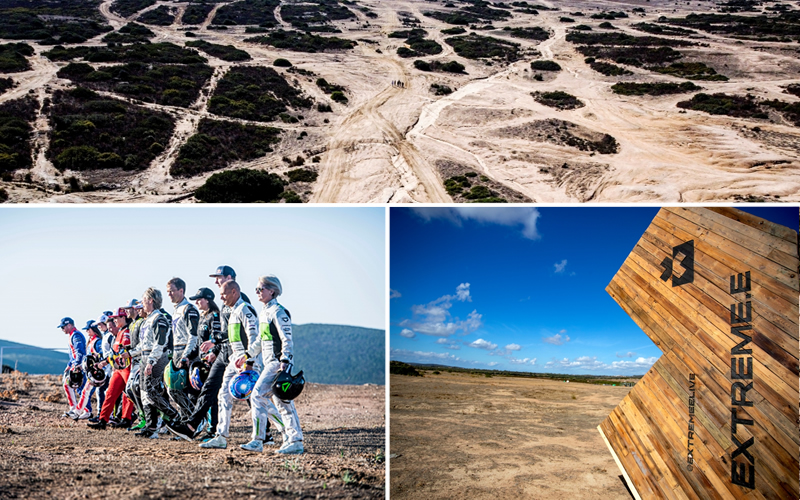 Rosberg X Racing claimed their third Extreme E race win after a car-killing weekend on the Mediterranean island of Sardinia.

Drivers Molly Taylor and Johan Kristoffersson were able to have a clean run in the final race to take the chequered flag with a 25 second advantage over runners up Jutta Kleinschmidt and Mattias Ekström of ABT Cupra, who lost a door in their final lap. 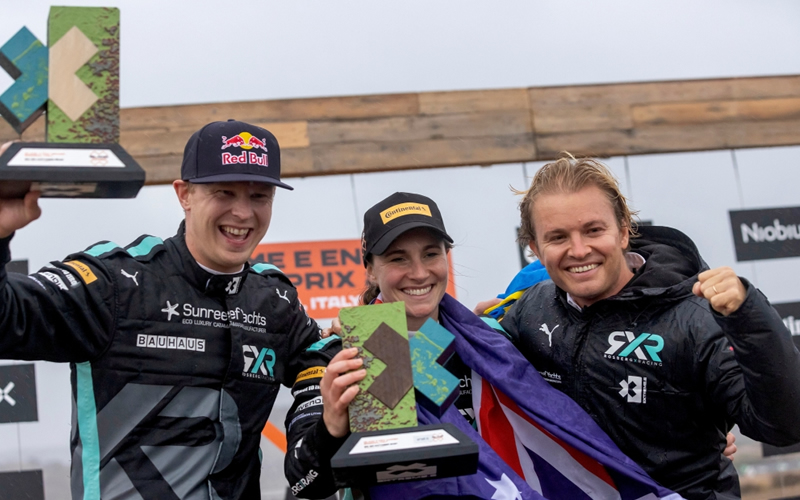 It looked like Chip Ganassi Racing were going to seal a comfortable victory at the beginning of the final lap as Sara Price left the switch zone with a 45 second advantage, but broken steering cruelly ended the American team’s race prematurely. 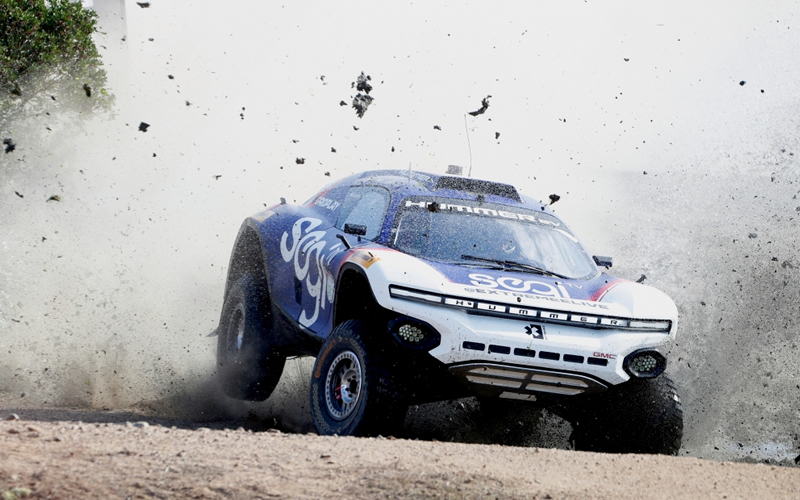 Kevin Hansen was able to nurse his broken JBXE Racing car far enough around the final lap to finish further ahead than the stricken Chip Ganassi car and take third place. 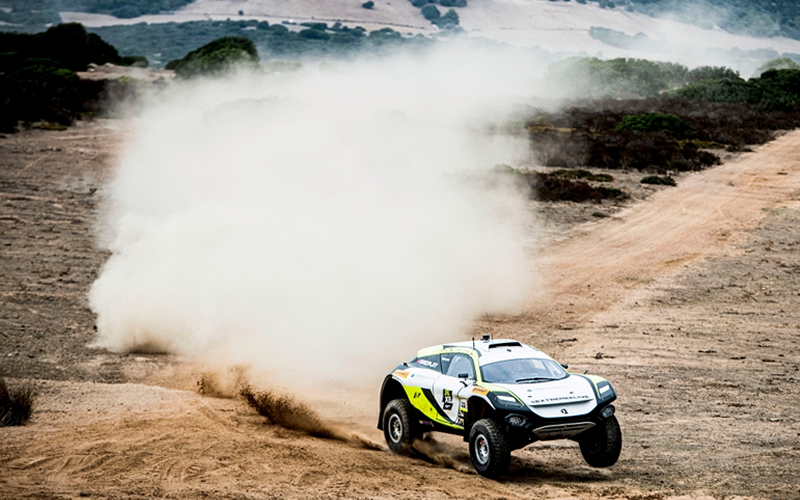 Title contenders Team X44 had to retire their car early in the final with another steering collapse, despite being top qualifiers on Saturday for the fourth event in a row. 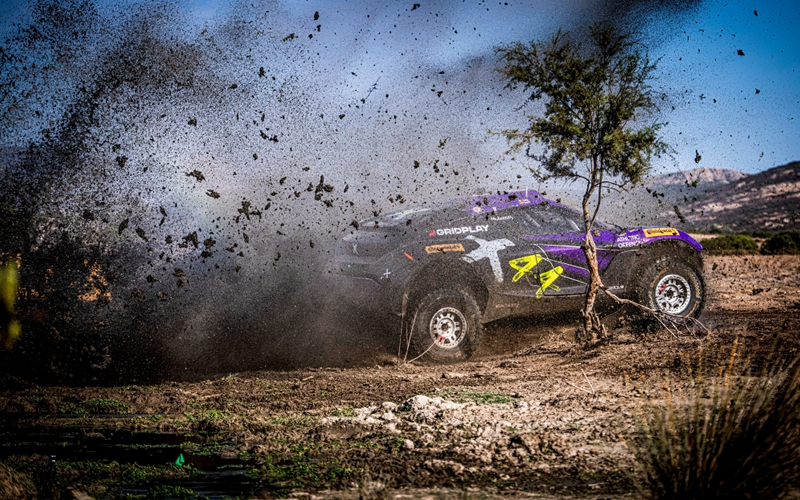 That leaves RXR with a 16-point advantage over X44 after the penultimate event of the season.

The most brutal Extreme E event yet…

Right from Qualifying 1, it was apparent that the course in Sardinia was one of, if not the most challenging course the Extreme E teams had faced yet. 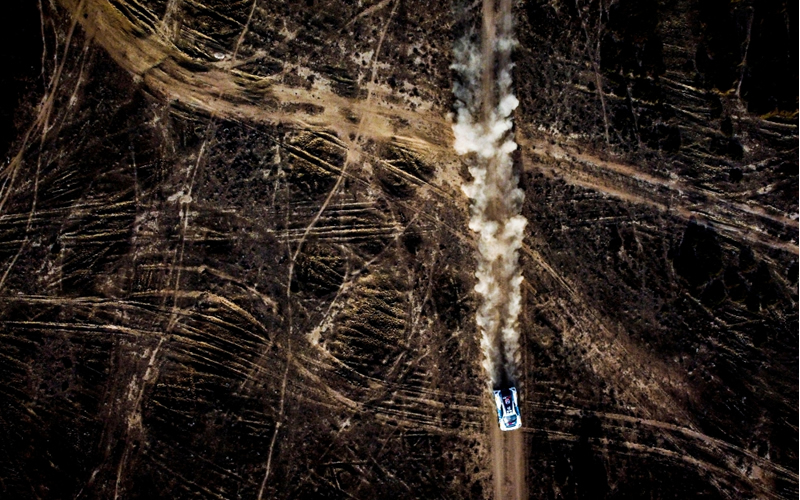 The loose surface of dust and gravel was littered with small boulders, with coarse undergrowth in close proximity to the racing lines.

Both main title protagonists were caught out in Q1. RXR’s Taylor rolled her car for the second consecutive event, but fortunately landed the correct way up and was able to hand the car on to Kristoffersson who gingerly nursed the car around to finish P6. 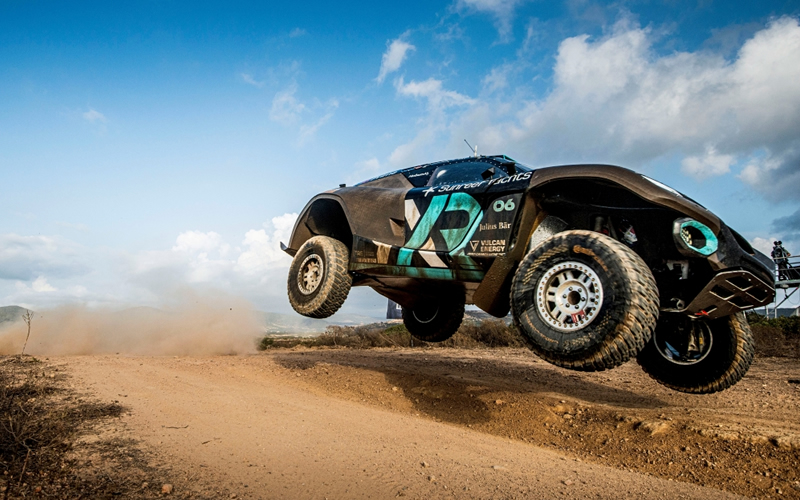 A remarkable recovery drive from Team X44’s Sebastian Loeb saw him make up 40 seconds of time on the rest of the field after teammate Cristina Gutierrez span in the first lap. 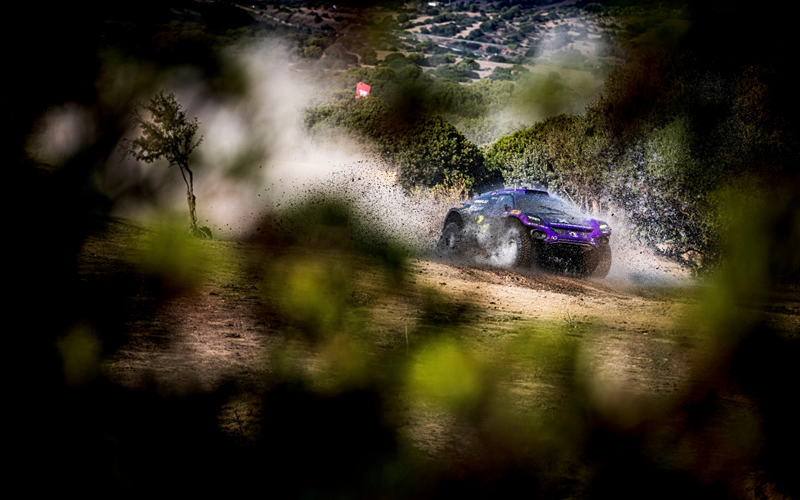 They pipped the Acciona Sainz to the fastest time in Q1, whilst a brilliant drive from the Veloce Racing team lead to a well-earned P3. Veloce’s fortune then took a bad turn, as their steering was then broken in Qualifying 2, leading to a retirement and P9. 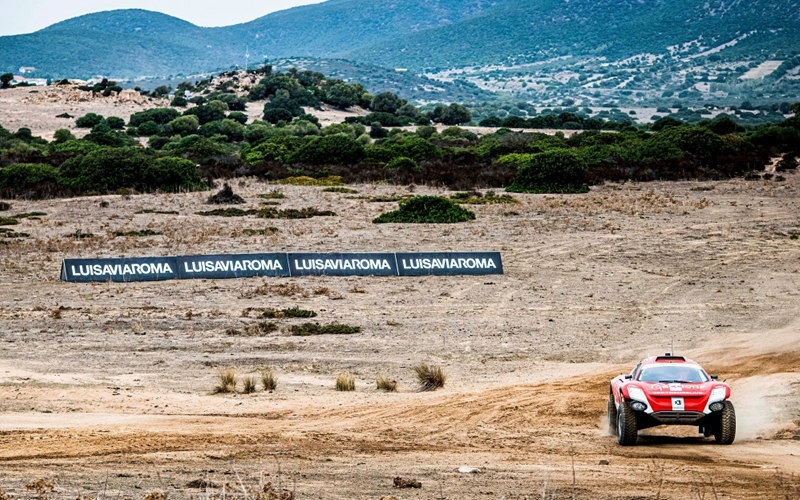 Acciona Sainz fared a little better, after a spin from Leila Sanz in lap one and then a broken power steering that required a full reset for Carlos Sainz’s lap, knocking them down to P8.

It was Ekström who was next to fall victim to the Sardinian course, after spinning his car in Q2, although, a clean run from Kleinschmidt kept them as high as P5, securing an overall qualifying finish of third. 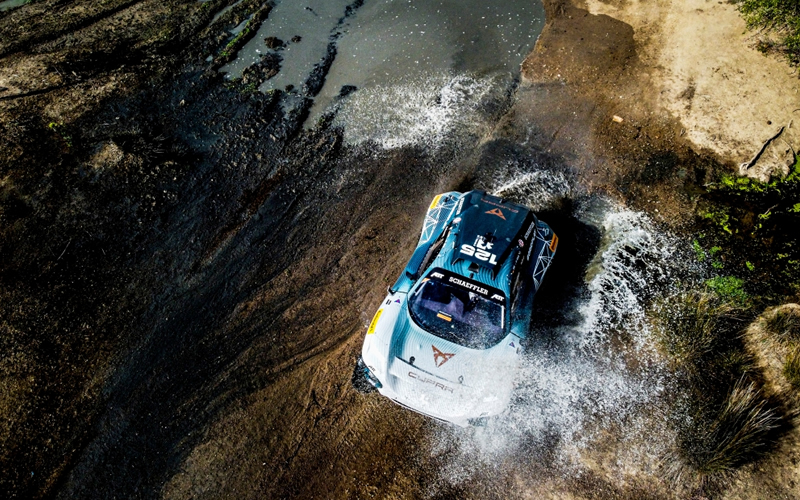 A clean run from RXR put them back into contention for the weekend, finishing P3 in Q2, and qualifying second overall, whilst Chip Ganassi Racing showed they had serious pace after a second-placed finish in Q2 rescued their Semi-Final qualification.

Once again, however, it was Team X44 who were the top qualifiers, thanks in part to Sebastian Loeb’s barn-storming pass through the Continental Tyres Super Section, the fastest of the weekend and therefore earning his team five extra championship points. 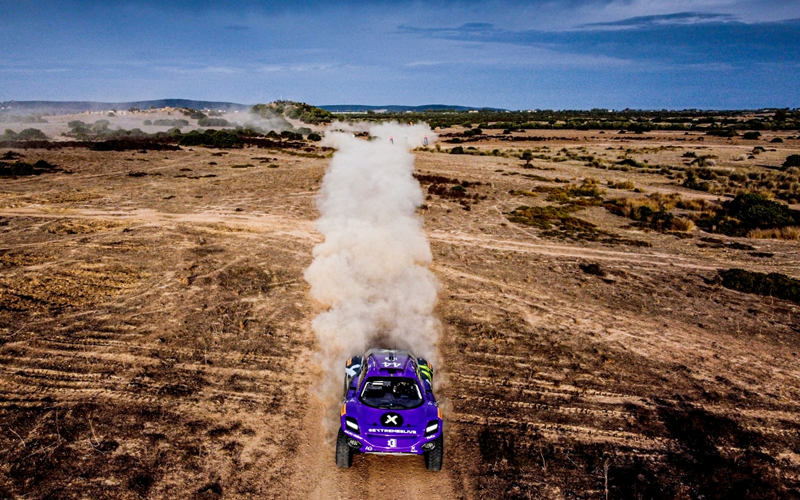 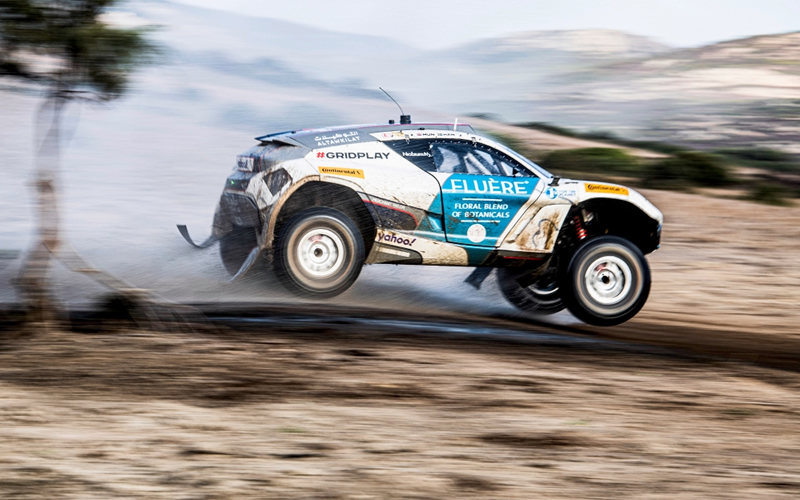 The Swedish driver was touched as he went through, and then made contact with the rear right of Gutierrez’s X44 car, causing her car to veer violently to the right of the racing and line and then off to the left and deep into the Sardinian undergrowth. 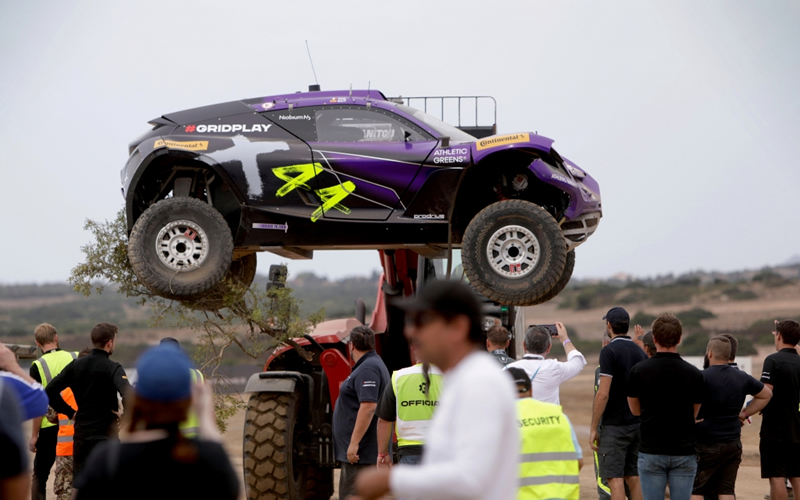 Hansen was briefly off the road himself but soon returned his damaged car to the race. However, it soon became apparent that the damage to the car was too great, and he had to stop before the end of his lap.

This allowed Price to cruise around the final part of her lap before handing the car to teammate Kyle LeDuc, who eased his car around, exploring a different line in the early part of his lap that he would then use in the final.

Andretti United were provisionally given P2 and the remaining spot in the Final on the basis that they had made it further around the course than X44. 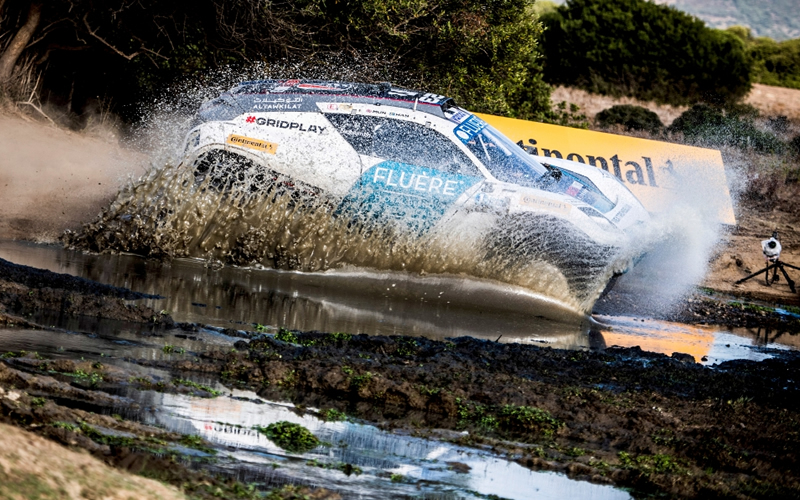 Attention turned to the stewards who were investigating the incident at the start of the race. Both teams presented their cases, but the stewards decided Hansen had been solely responsible for the contact, and therefore Andretti United were demoted to P3.

Dave Richards, chairman of Prodrive who runs Team X44, later vented his frustrations with Hansen’s role in the incident.

“It will end up like bumper cars and rallycross”, Richards spoke in an interview for the TV broadcast.” “You can’t win championships like this, it’s unacceptable driving standards.”

Andretti United’s team principal, Roger Griffiths was quick to defend Hansen, citing that the earlier contact between him and Price left the Swede out of control.

“Timmy got a little bit ahead of Sara and unfortunately there was contact between the two cars,” said Griffiths.

“Timmy was just a passenger and was unfortunate in the way he ran into the back of Cristina [Gutierrez], no intention to hit her.”

He was however quick to offer support to X44 in order to get their car fixed ahead of the Final, and indeed the mechanics of both teams were successful in their efforts to make the start line.

NEXT TIME ON EXTREME E…

The final round of the Extreme E season will take place on the 18th-19th December at Bovington, on England’s Jurassic Coast.

Extreme E will be working closely with the British Army, who have a base in Bovington, as they aim to transition to renewable power sources to help towards the UK Government’s net-zero Carbon emissions goal for 2050.