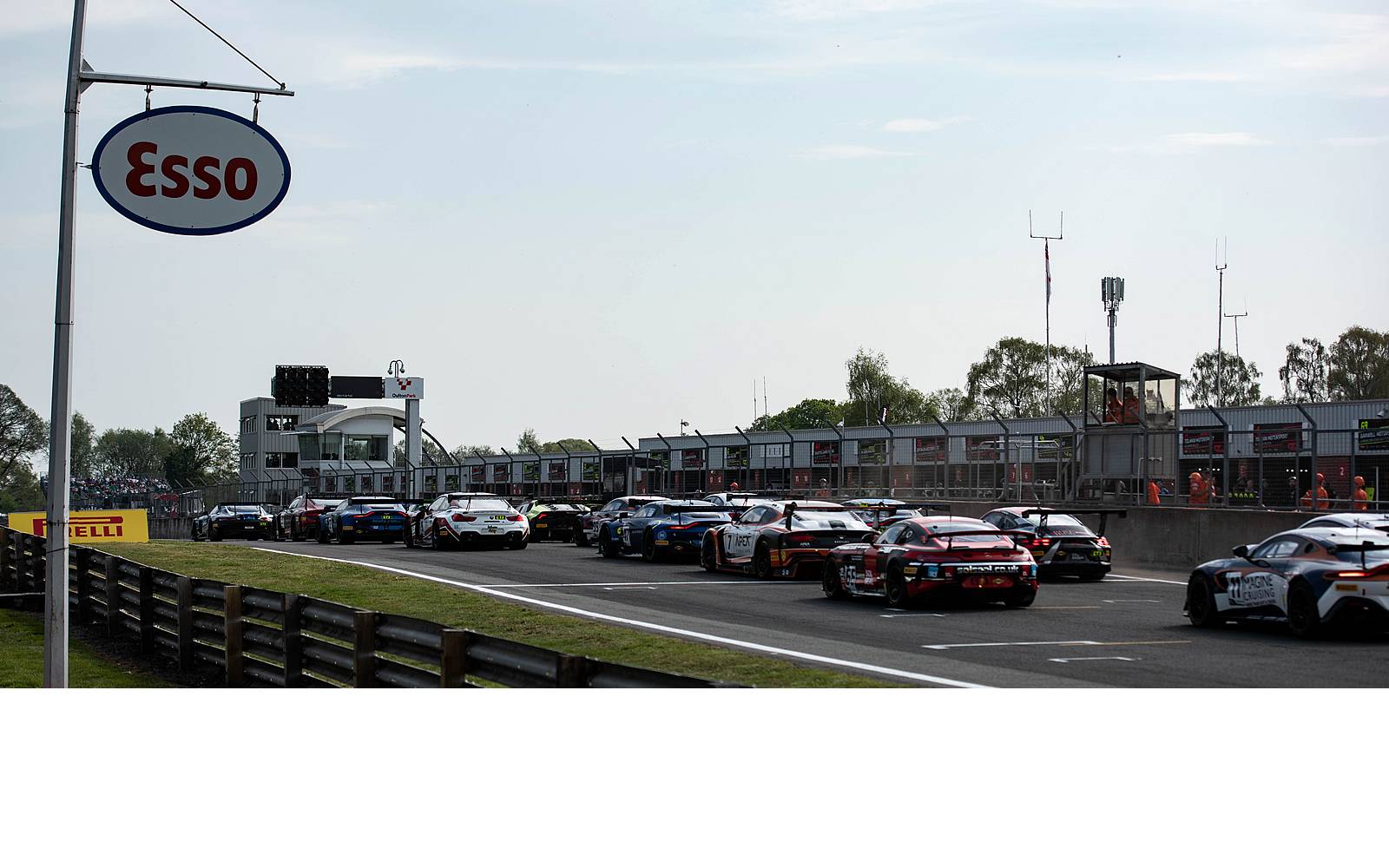 The British GT Championships opening round started on a blisteringly hot Easter Bank Holiday weekend at Oulton Park. The weather conditions were in stark contrast to last years opening meeting where the second race was somewhat controversially cancelled due to persistent rain and flooding on the track.

Despite only a couple of laps being completed behind the safety car, points were awarded to the teams despite no race having taken place. No such events would occur this weekend with barely a cloud in sight over the whole weekend.

The anticipation in the series was high with new models of cars from Aston Martin, Bentley, Lamborghini and McLaren, with Century Motorsport expanding their team with two brand new BMW M6’s in the GT3 class.

The GT4 class offered up some great racing last season, and will no doubt be the same this year. There are many familiar-looking cars on the grid with BMW, Mercedes and McLaren all returning in numbers, in addition, we see the introduction of the Ford Mustang and return of the KTM to the British GT ranks.

Saturday was qualifying day with the sessions split into four categories, the GT3 Pros, GT 3 Ams and the same setup for the GT4 class. Each session would determine grid positions over the two races on Bank Holiday Monday.

The GT3 Ams were the first to set the pace in a 10-minute qualifying session. Ryan Ratcliffe returning in the Bentley set the early pace but was soon overtaken by Ian Loggie who has switched from the Bentley to Ram Racing’s Mercedes GT3.  Loggie consolidated his time twice more in the session to ensure he had the pole for the first race, with Ratcliffe in second position.

The GT3 Pros were next out, Phil Keen, always masterful in a Lamborghini, took the best time from Callum Macleod to deny the Mercedes a pole in both races.

Both GT4 qualifying sessions were dominated by the Multimatic Ford Mustangs, with Seb Priaulx beating the existing qualifying lap record by the slightest of margins.

On Sunday, Balfe Motorsport decided to withdraw the rather stunning McLaren 720S GT3, they had been plagued by electrical gremlins and decided to take the car back to its workshop to try and work out exactly what was causing the issue.

The race began fairly orderly, but as early as lap 2 there was a safety car required as the two leaders collided. Ratcliffe looked determined to try and find a way through but maybe took the chance at the wrong moment. He tried to dive up the inside of Loggie’s Mercedes at the chicane but misjudged the gap and sent the Bentley up into the air, and spun Loggie’s Mercedes.

Upon trying to rejoin, he soon realised that the car was broken and ended up blocking the entrance to the chicane, which was then tamely driven into the side of by Mark Farmer who was already recovering from an early excursion to the grass. Rick Parfitt then snapped up the opportunity to grab first place, this stayed the same up until the first pit window had opened.

At the front of the GT4 class, the two Mustangs had kept their 1-2 position for the early part of the race with Jade Burford taking over the lead from Scott Maxwell, just before the first round of pit stops he would relinquish that position to Dean McDonald’s HHC run Mclaren.

The second half of the race would see the Pros take over the wheel. Seb Morris taking over from Rick Parfitt kept a stable gap between himself and Phil Keen. The battle for third was where the action was with the Optimum motorsport Aston driven by Bradley Ellis holding of Jonny Cocker in the Lamborghini Huracan.

Despite Keen slowly closing the gap over the last few laps, Morris hung on to claim the win for him and Parfitt, with Keen and Balon finishing second. Despite persistent efforts, the Optimum Motorsport Aston took the final podium spot.

The early dominance of the Mustang in the GT4 category slowly faded as the McLaren of Dean McDonald & Callum Pointon took the victory, followed by two more McLaren 570S, second place was James Dorlin & Josh Smith and third was taken by Tom Jackson & Luke Williams, to block out the podium.

The second race saw the Pro drivers start in the car, Phil Keen keeping the Huracan in first place around Old Hall corner, had slowly started to build up a lead; which he knew the team needed as they were to have time added onto their pit stop due to their finishing position in the first race.

Another early safety car occurred due to a GT4 Mercedes getting itself beached in the gravel at Cascades. Meanwhile, the GT4 Mustang, like in the first race began in the lead, this time over Scott Malvern in the GT4 Mercedes.

Soon the cars were heading into the pits to swap from the Pro to the Am drivers, after the safety car Phil Keen only had a 3-second gap over second position with a 7-second success penalty to be served.

Not long after the GT3 pit stops had been served, Mark Farmer spun his Aston and managed to get himself stuck on the approach to Shell corner, causing the second safety car of the race.

The order after the pit stops left the Team Abba racing Mercedes GT3 in first, with Sam de Haan a close second in the Barwell run Lamborghini. De Haan took an opportunity to take the lead at Hislops when the Mercedes ran wide, once he got in front he slowly eked out a lead and stayed that way until the chequered flag.

Meanwhile, both Parfitt in the Bentley and Loggie in the Mercedes had offs causing them to drop down the order, whilst Graham Davidson and Ryan Rattcliffe had sizeable accidents towards the end of the race resulting in two DNF’s.

The GT4 battle was won by Seb Priaulx and Scott Maxwell after Nick Jones span out of the lead.

The series now heads onto Snetterton in a few weeks time, with the two Barwell run Lamborghini Huracans in the top two spots in the GT3 championship. Seb Morris and Rick Parfitt sit in third and will be hoping they can rekindle the form which took them to the GT3 drivers’ title two years back.

The GT4 class looks to be as competitive as ever, with the McLaren driven by Dean McDonald and Callum Pointon sitting joint top with the series new boys in the Mustang driven by Seb Priaulx and Scott Maxwell, with Steve McCulley and Matthew George sitting in third in the Invictus run Jaguar.

Full Results can be found: https://www.britishgt.com/results