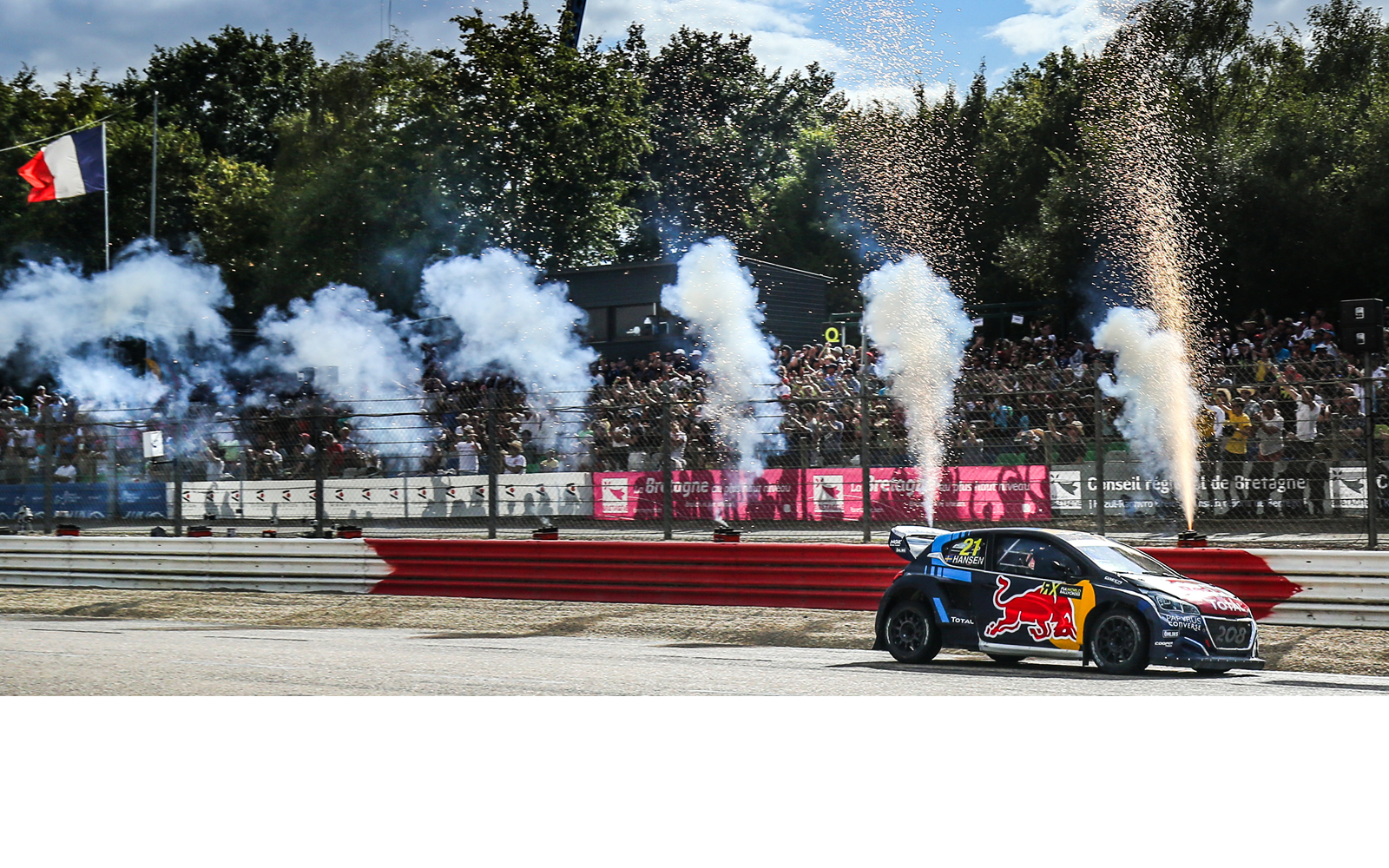 Team Hansen MJP’s Timmy Hansen took an emphatic victory in round eight of the FIA World Rallycross Championship presented by Monster Energy, the World RX of France on a weekend in which the championship battle took a new twist.

The overall results from the weekend meant Norway’s Andreas Bakkerud rose to the top of the drivers’ standings despite a fifth-place finish in the final.

The Monster Energy RX Cartel driver now sits on 160 points with the Hansen brothers tied on 158. Timmy’s victory was his third of a season which has produced six different event winners with eight of the 10 rounds completed.

In the final, Timmy took advantage of a gap which opened up when Bakkerud’s Audi S1 and the Hyundai i20 of GRX Taneco’s Niclas Grönholm went wide in a squabble for the lead at turn one.

Meanwhile, Kevin and Marklund, who started on the back row of the grid, engaged in battle with GC Kompetition young gun Rokas Baciuska of Lithuania.

After his joker lap, Marklund emerged in second place behind Timmy while Kevin produced a spirited drive to pip Baciuska by inches at the joker lap merge.

Timmy’s victory was a dramatic response after he missed the semi-finals in the previous round at Trois-Rivieres, Canada. The Swede also left the opening round in Abu Dhabi with a paltry points tally after heavy contact with Bakkerud in qualifying.

“This weekend has been amazing. From a championship perspective I’ve taken two big hits with nearly no championship points from two races – Abu Dhabi and Canada – so I’m very happy with the result and the position in the championship,” he said.

“Coming here to Loheac where we have so much support from the French fans is special. The Peugeot is very good around this circuit.”

“I was feeling very comfortable all weekend. I needed a perfect Q4 to get the pole for the semi-final which I got, then I was all-in for the final where Andreas (Bakkerud) and Niclas (Grönholm) opened the door for me.”

“It was so nice to come out in front and concentrate on my own driving. I had such a good gap that I was able to take in the incredible atmosphere.

“As for the championship, it’s exciting to be in the middle of this fight. It’s going to be an interesting end to the year. It is me, Kevin and Andreas all racing for our first world championship. Who grabs it is down to whoever is able to put it all together for the last two rounds and perform best under this pressure.”

Fellow-Swede Marklund, who was third at Silverstone in round four and first to the flag in Hell, Norway in round five, only to be deprived of the win due to a technical infringement, was delighted to reach the podium at the home race of the French GC Kompetition squad. “I know how much this race means for the team, so it’s great to be able to reward everyone with this second place,” he said.

“The Renault Megane was strong all weekend and I had some great pace in the final. Starting from the back row in the final is not easy so I was glad to be able to reach the podium eventually.”

Kevin Hansen, who led the drivers’ championship by five points over Bakkerud ahead of Loheac, had struggled in qualifying and only just scraped through to the final after a brilliant recovery drive.

“It was a really tough weekend for me. I had a lot of bad luck in the qualifying rounds and I have no idea how I got to the final to be honest,” he said.

“I was sure on the last lap of the semi-final I was not going to make it to the final. In the final I didn’t quite have the pace to keep up with the other two Swedes. I pushed really hard in the joker lap and managed to just get out ahead of Rokas (Baciuska) to finish third. I just had to fight. I am a rallycrosser, I never give up.“

“It’s great that the championship fight is so tight. We have to work together as a team to get the edge on Andreas, but realistically I just have to do my own thing and hope it is enough.”

En route to fourth place in the final Baciuska became the first driver from the GC Kompetition team to win a qualifying session with the fastest time in Q2 on day one.

GC Kompetition team boss Guerlain Chicherit was delighted with the team’s overall performance – with both Marklund and Baciuska making the final. “This was the second time in a row we have put two cars in the final so the team is getting stronger.

“Rokas (Baciuska) made a very small mistake on the last lap on turn five which cost him just a few tenths and the chance to put his nose in front of Kevin (Hansen).

“We have to acknowledge that the Hansens did an amazing job on the strategy by protecting each other. This is something we still need to learn. We are not at that level yet but we are quick learners.”

“For me personally the weekend was a bit frustrating. I had the speed but I had some contact in qualifying but that’s motorsport. We have two more races before the end of the season and I really want to be on the podium. I think I have the pace to do it so it is just a question of putting everything together.”

Guillame De Ridder’s run of back luck continued although he did manage to grab a consolation win in Q4. “It’s good for the mind to finish with a victory here in Loheac. Now the focus is on the next round in Riga,” the Belgian said.

Fellow GCK Academy driver Cyril Raymond finished 15th overall much to the disappointment of his countrymen.

Finland’s Toomas “Topi” Heikkinen, showed an impressive turn of speed on his return to World RX in the GRX Taneco Hyundai i20. He finished third overall in Q1 after day one but had to settle for fourth in semi-final one. EKS Sport’s Krisztian Szabo and Team STARD’s Janis Baumanis were fifth and sixth respectively in the same semi-final.

The Pailler brothers, Fabien and Jonathan, fielding a pair of Peugeot 208s, did not advance to the semi-finals but relished being part of their home event. “We are from Brittany, we live about 200km from here so this is very much our home race and I have been here over 30 times. As always, the fans have been amazing and it is important for us to keep the Pailler name going here,” Jonathan said.

It was a torrid weekend for Britain’s Oliver Bennett. His Xite Racing Mini Cooper ended in the gravel trap after a spin in Q2 and he suffered a second DNF in Q4 after heavy contact with Chicherit and finished well down the order in the overall standings.

“It all went downhill from Q2 really where we had the initial contact and ended up in the gravel,” he said. “Then in Q4, I thought I was clear into turn one but got a shove from the left side which triggered a catalogue of events and I was a passenger from then on. Luckily, the damage looks worse than it is. Onwards to Latvia now.”

French veteran Herve Knapick in the Citroen DS3 and Matvey Furazhkin, making his World RX debut, in the ESmotorsport-LabasGAS Skoda Fabia, rounded out the order.

Round 9 of the Championships heads to Latvia for the Neste World RX of Latvia on 14th Sept.
Press Release & Photo’s: Copyright © 2019 FIA World Rallycross Championship