The penultimate round of the BTCC headed to Donington Park over the weekend, with Ash Sutton firmly in control of the title race. It was now down to his main championship rivals to see if they could make a dent on his championship lead at the Midlands circuit. 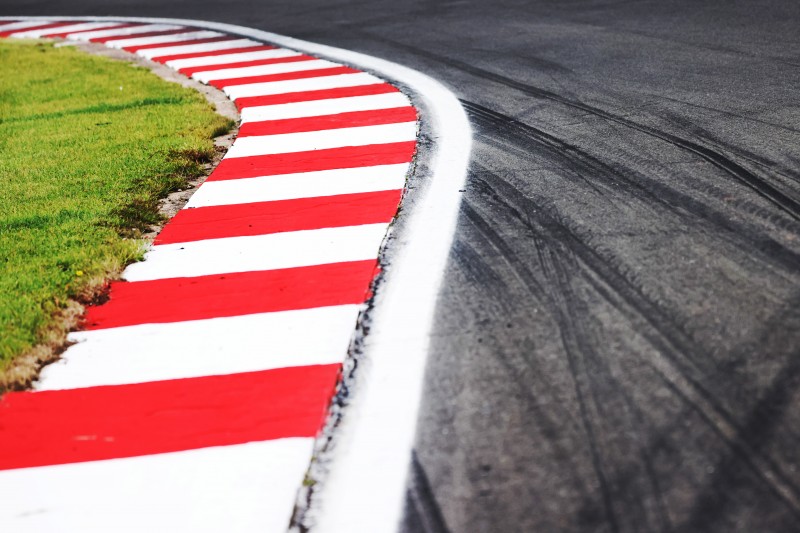 Gordon Shedden qualified in pole, and had Dan Lloyd beside him. The other PMR racing Astra driven by Jason Plato was in third with Rory Butcher in fourth. Despite only qualifying in ninth, Sutton was still ahead of his main rivals Jake Hill and Tom Ingram in the championship battle. 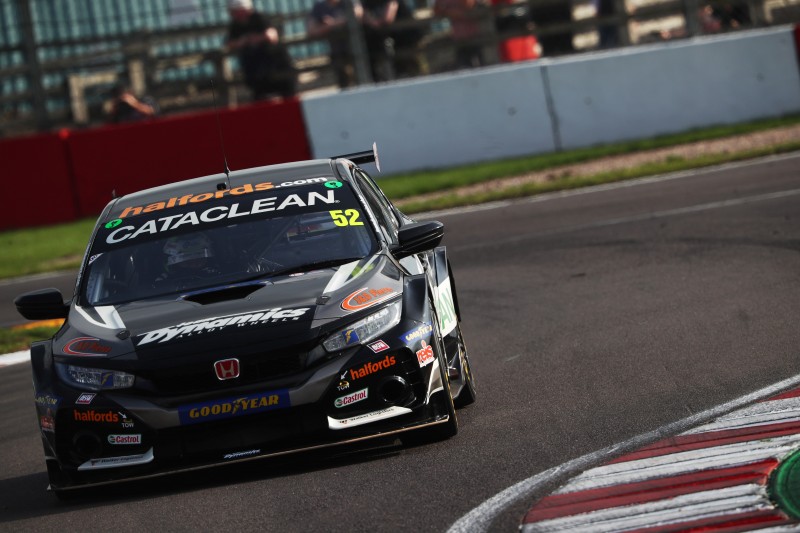 Shedden made a good start and converted his pole position into first spot as the cars came around Redgate. Butcher was fighting Plato for third as they headed into the Craner Curves, with Butcher managing to hold on round the outside of the Old Hairpin to take the spot. Plato then lost another spot to Senna Proctor as they went through Starkeys.

There was drama on the third lap as Ollie Jackson tried to get up the inside of Adam Morgan at the Old Hairpin, as he tried to get back alongside he squeezed Morgan to the right where Jackson’s team mate Hill was also trying to take advantage. The BMW was the meat in a Ford sandwich and ended up getting turned round at high speed into the barrier. 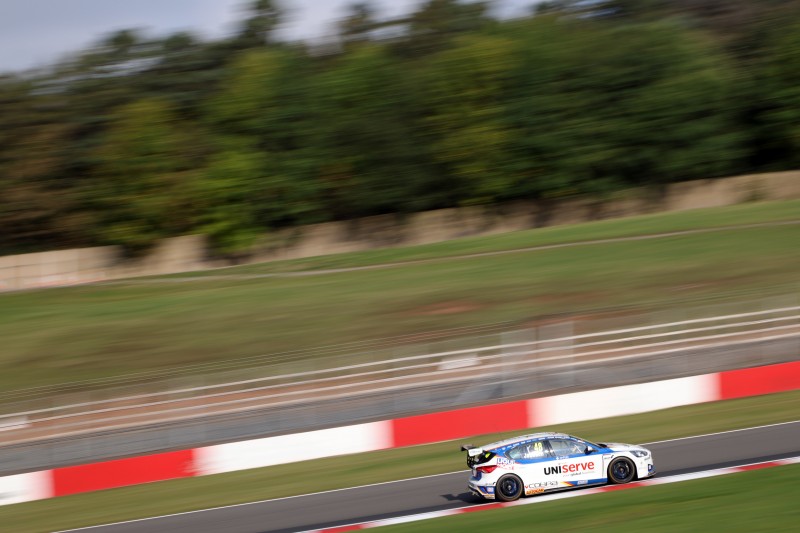 Once the mess had been cleared up Shedden once again led the pack through the first corner. A little further down the field as Rowbottom tried to get ahead of Turkington, Cook tried to join in the party to get ahead of the Halfords run Civic. As they all held each other up Sutton made the most of the opportunity and moved himself up two places into seventh. 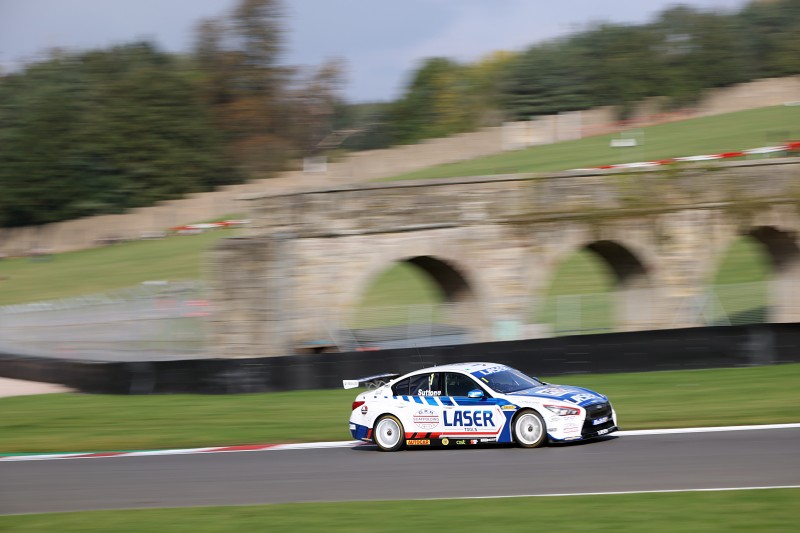 The race went by without much further incident with Shedden taking a comfortable victory ahead of Lloyd. Butcher taking the final podium place. 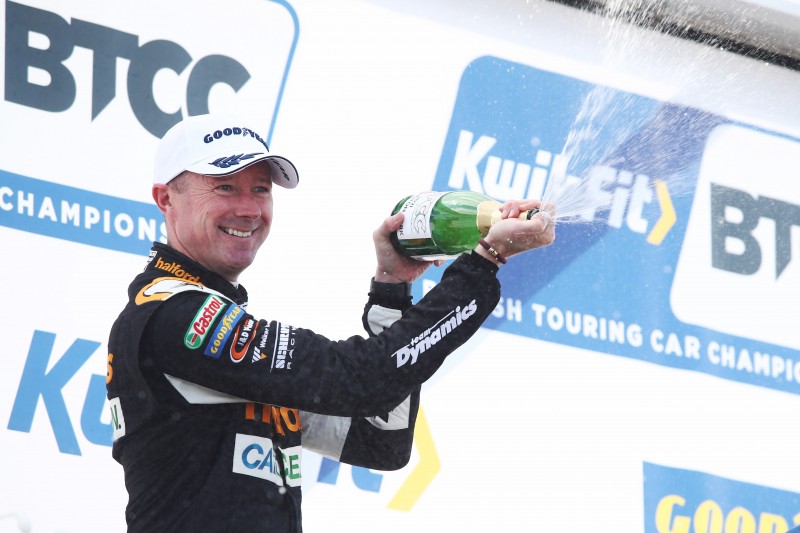 Shedden once again made a good start off the line, but he was quickly overtaken by his brother-in-law Butcher who snuck up the inside as they entered the Craner Curves. As Sutton was trying to make a move on Turkington for fifth spot Tom Ingram appeared out of nowhere to take the position from him. Ingram had started in 11th place but soon catapulted himself up the grid. 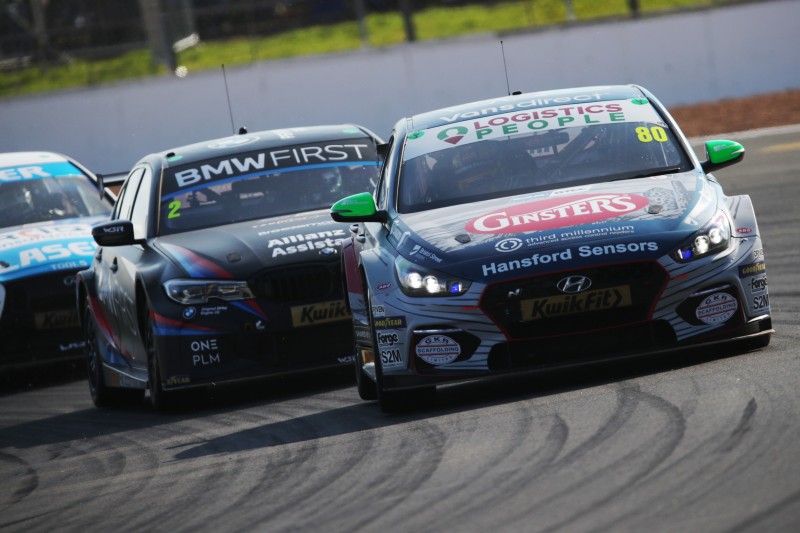 Ingram then easily got himself ahead of Turkington at the beginning of the second lap to move up another spot. Just a few corners later and he was ahead of Proctor into fourth. Meanwhile upfront, Shedden managed to take the lead back as he drove up the inside of Butcher as the cars entered the Old Hairpin. 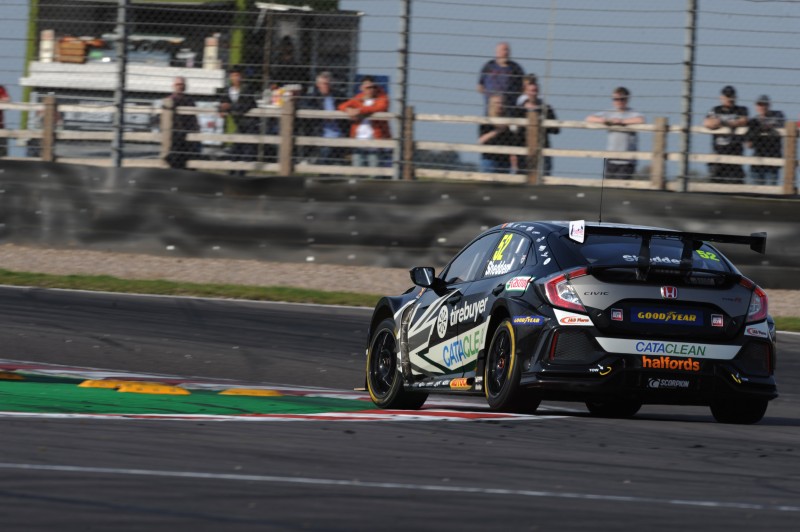 Ingram’s progress didn’t stop, he easily got ahead of Lloyd and set his sights on the top two. It only took until the fifth lap before Ingram got into second as the cars entered Redgate and set about catching Shedden in the lead. On the tenth lap Ingram finally caught up with Shedden and managed to get ahead of the former champion as they went into the chicane. 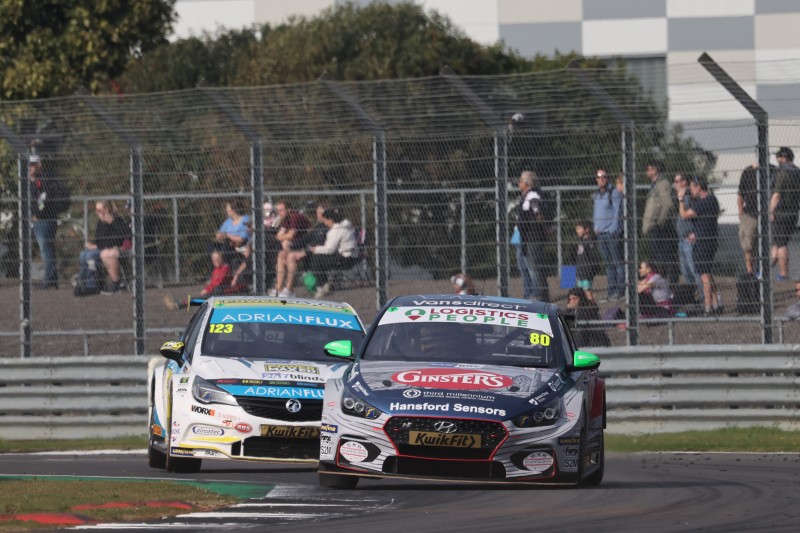 In the championship fight, Turkington looked determined to make as many points on Sutton as possible. He started to make his moves at the midway point of the race, first picking off Proctor and then Lloyd to move himself up to fourth. Sutton was back in eighth, driving in a more muted fashion than normal to preserve his championship points lead, rather than the attacking drive we are used to. 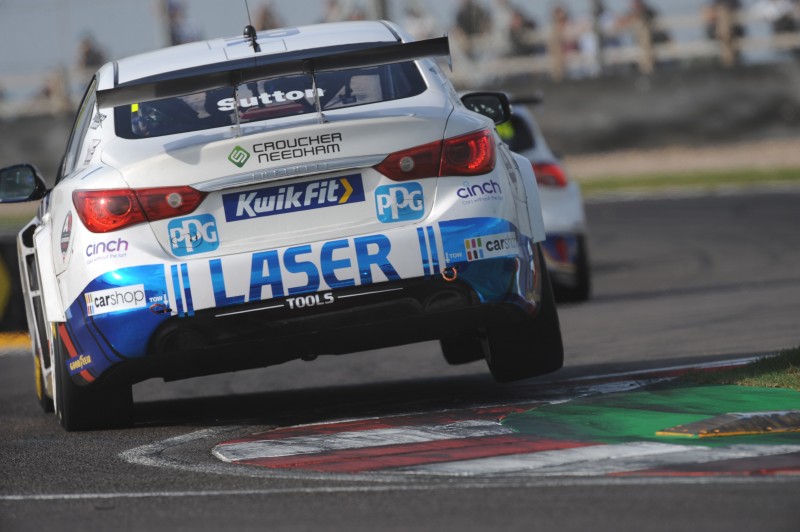 As Sutton could see Turkington moving up the field, he soon started to make progress and had got himself up to sixth with just three laps remaining. On the same lap Turkington made an uncharacteristic mistake as he took too much kerb as he exited the Old Hairpin, he put the BMW into a spin and dropped down to 11th. 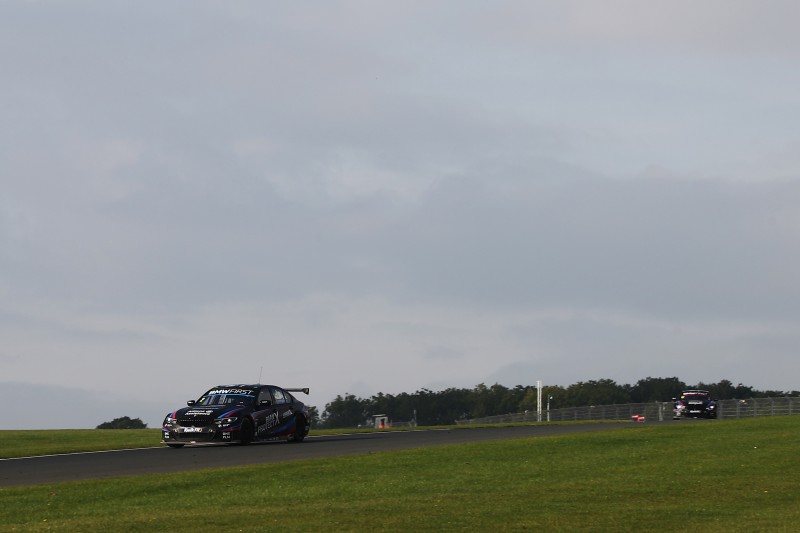 Although Ingram won on the track, his move on Shedden was deemed to be a push to pass move and he was awarded a one second time penalty demoting him into second. Butcher held on to third to take the final podium spot.

Turkington was gifted pole position in the final race as a result of the reverse grid draw, Rowbottom alongside him. Hill and Moffatt sat behind on row two. 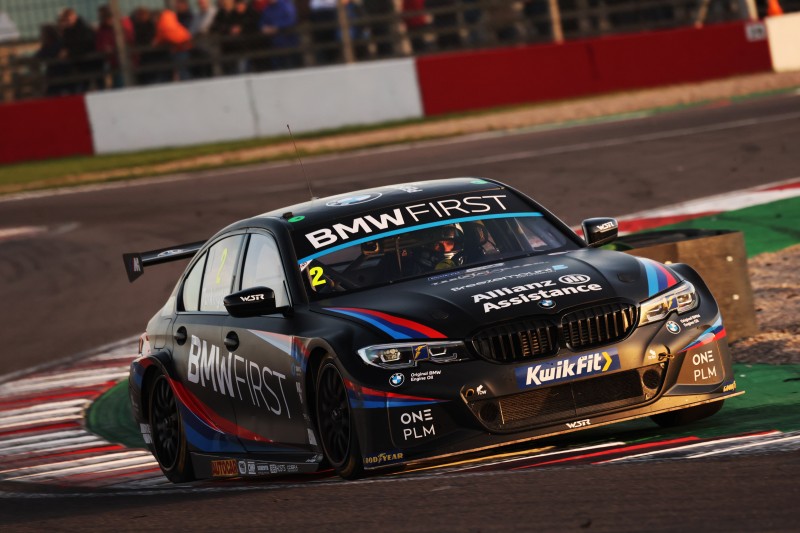 Turkington made a demon start and pulled himself clear of the pack. Just behind there was drama as Sutton was sent wide and off the track, he managed to hold on but dropped a few positions as a result. The safety car was brought out to rescue the cars of Jack Butel and Sam Smelt who had a coming together at the first corner. 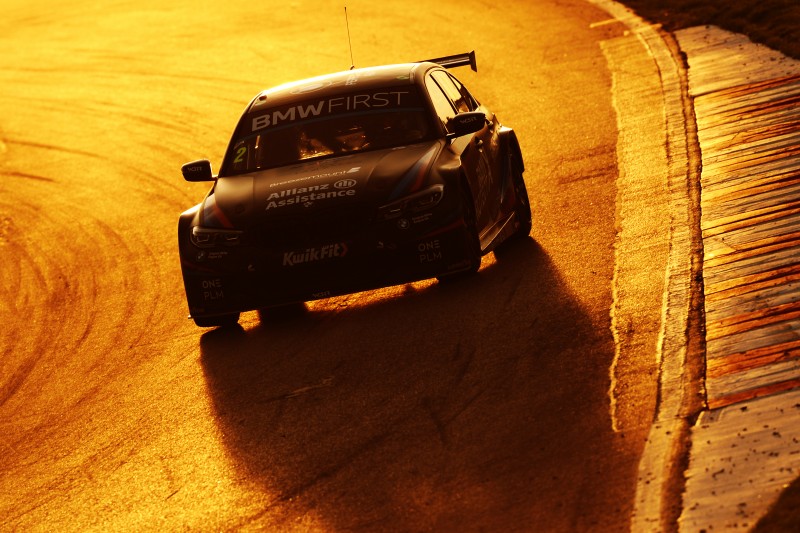 Turkington went early off the restart and stormed away from Rowbottom in second. Rowbottom and Lloyd were both soon hit with five second penalties for being placed out of the box on the starting grid. 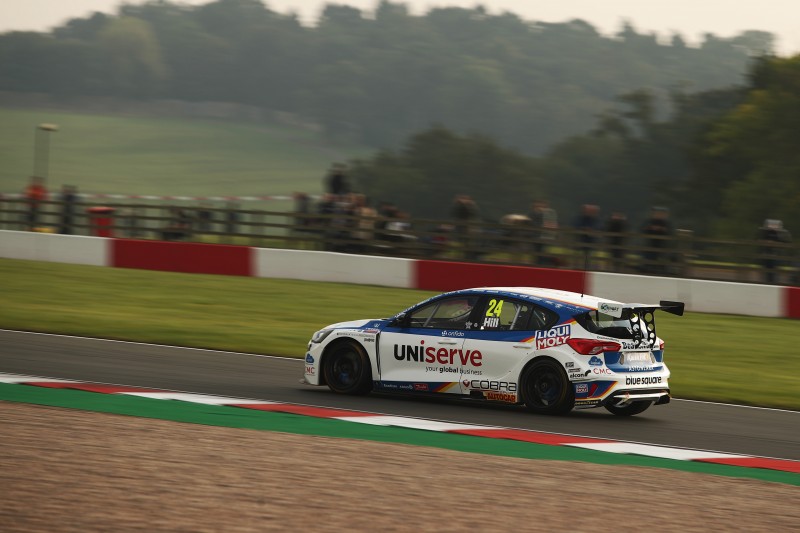 Hill finally managed to get himself ahead of Rowbottom on the track on the eleventh lap as Hill got himself in front as the cars entered McLeans. Cook made the most of the gap made and he too went in front of Rowbottom. Not wanting to miss out on the action, Moffatt went ahead of them both as they were squabbling for position and planted himself in third place. 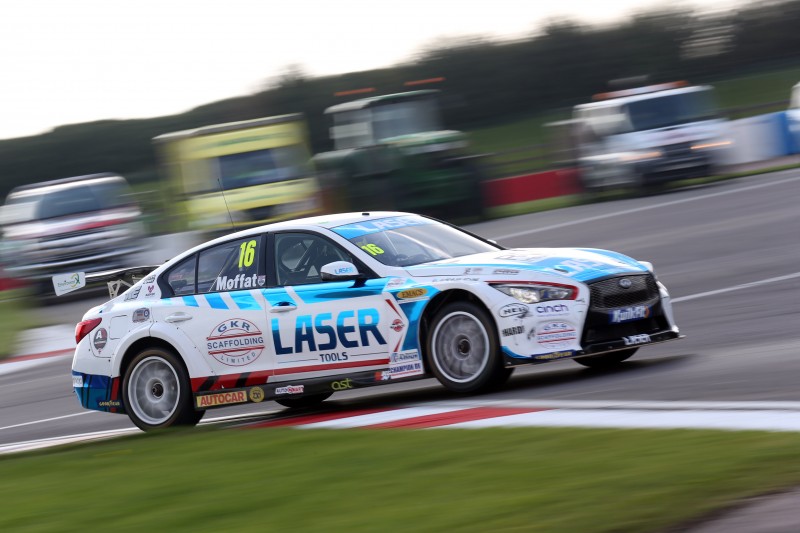 Further down Ingram was driving defensively trying to keep his championship rival Sutton behind him. Soon a gaggle of cars had caught the tail of Sutton as he couldn’t quite get himself ahead of the Hyundai. It took until the twelfth lap before Sutton managed to find a way ahead of Ingram and into eighth. 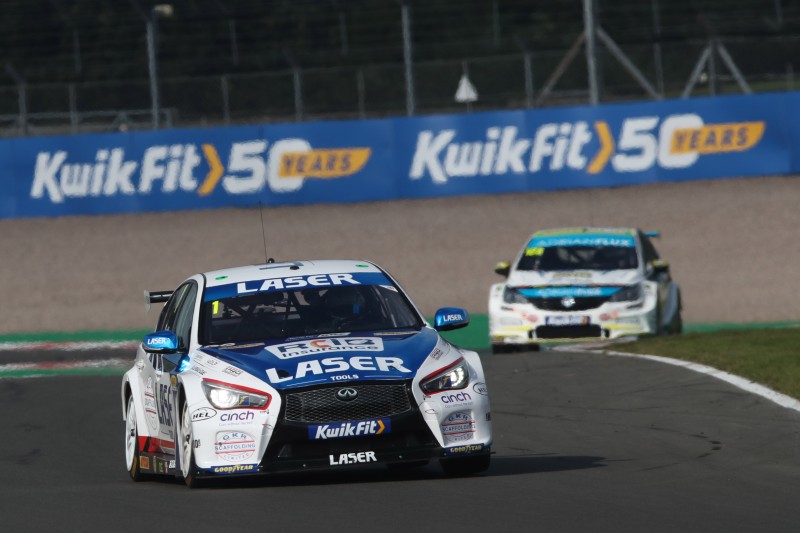 Turkington comfortably held on for the win. Hill managed to fend off Moffatt to keep his second place, with the Scotsman taking the final podium position. 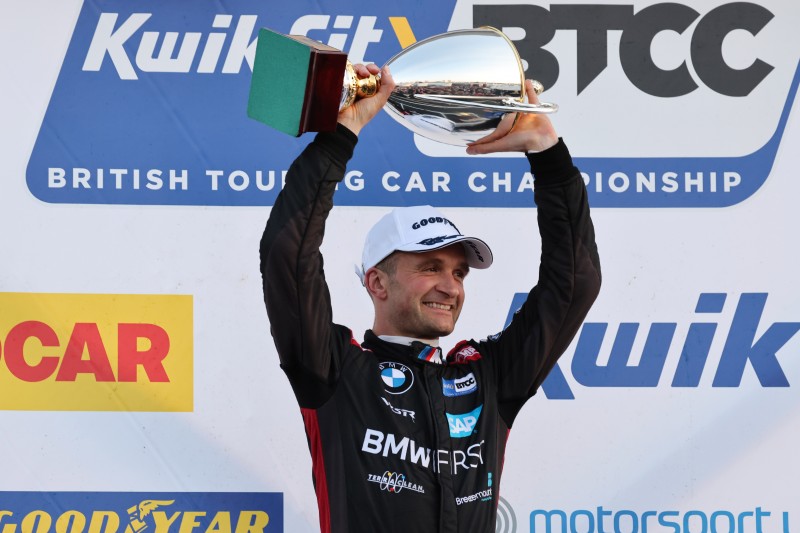 Sutton still leads the championship 36 points ahead of Ingram in second. Hill is in third just two points behind Ingram. The lead should secure Sutton the win, but as seen in the past anything can happen on the final day of the season. One title which has already been decided is the Jack Sears trophy. Rowbottom claimed the title after the second race of the day to pick up the prize as the top rookie driver.