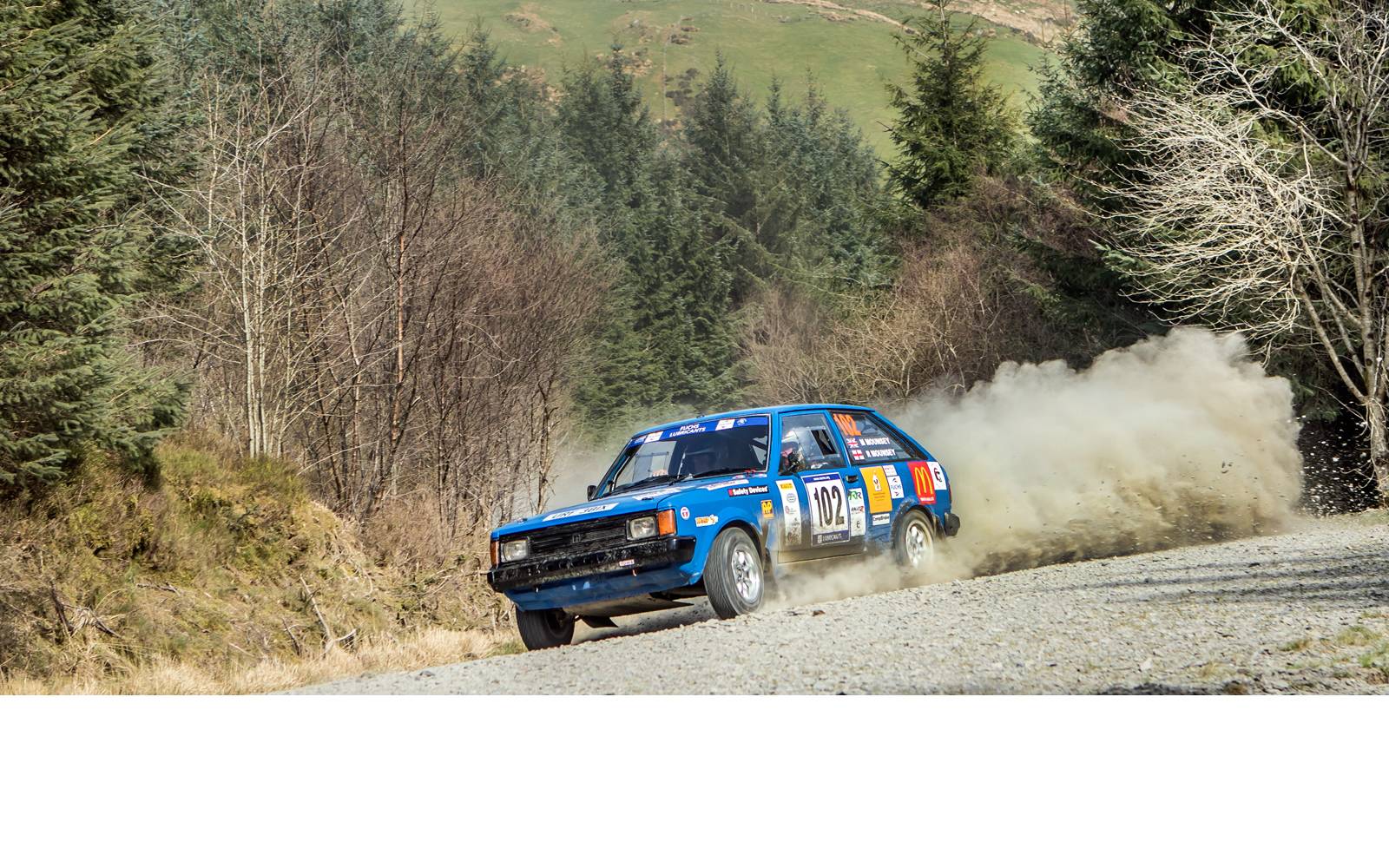 How about some more recent familiar names such as Mikkelsen or Evans?

The above form a rather impressive list of winners and some of the history of this event which dates back to 1958, six years after its organising club The Wolverhampton and Staffs Car Club was founded. A club and event which has well and truly played its part in British Rallying for many years, by hosting World Rallying along with British, National and Regional Championships.

Today it continues to play its part as an event in current Championships such as The Fuchs Lubricants Motorsport UK British Rally Championship and the Pirelli Motorsport UK Welsh National Rally Championship. Also, a welcomed return to this Mid Wales-based event was the Rally2 initiative, which offers up a chance for an increased variety of Historic rallying machinery to get out onto the stages to compete.

Just like previous guises of Rally North Wales the format was once again compact this year, but still managed to make use of the World famous rallying theatre that is the Dyfi & Gartheiniog Forest complex.

8 Stages totalling some 45 competitive stage miles attracted an entry of 120 competitors to both the National A & B events and the action got under way in Dyfi Main where the stages were in prime condition.

The National A entry list looked a bit like a one-make Ford Club outing, some 39 Ford Escorts in varying flavours were out competing on this event and it was one particular MK2 Escort which dominated the leader board throughout the day.

Although Nick Elliott & Dave Price had the No1 on their door following their overall win on the event last year, it was local lad Osian Pryce alongside Co-Driver Dale Furniss who dominated the National A event this time around, with 6 out of the 8 outright stage wins.

It was only the last two stages of the event, the second run through Cwn Celli and Gartheiniog where the likes of Martin McCormack and Nick Elliott managed to match his times. This I think was more than likely because Pryce & Furness were happy that they had built up a sufficient lead and didn’t want to throw it all away in those last few stages. Pryce & Furness won the National A rally overall and also came third in the Welsh National on this, the second round of the Championship.

Although Elliot had to settle for second overall that was more than OK for him because that meant it was a maximum points haul in Category 3 for the opening round of the British Historic Championship, of which Pryce was not registered for. This is a great result and the perfect way for Elliot to get his 2019 historic rallying campaign underway, even more impressive seeing as he hasn’t peddled the MK2 Escort on a gravel rally for a considerable length of time.

Behind Elliot in third overall and taking second in the BHRC was the young gun Joe Price who was also in a MK2 Escort. Price put in a strong consistent pace throughout the rally, never being more than a handful of seconds off of Elliot in the first loop of stages.

He did manage to get the better of him just the once in Stage 3 Cwn Celli 1, but by the midpoint of the event, it looked like the best he was going to manage would to be the runner up to Elliot. Still a second to the likes of Elliot on the BHRC podium for round 1 and a third overall on the event is a decent day work in anyone’s eyes.

Swapping his Skoda Fabia R5, which he competes in for the BRC, for a Ford MK2 Escort; Irishman Marty McCormack had a terrible start to the rally. For the opening stage of the day, Dyfi Main, he clearly hadn’t made that transition to the Escort too well. With a couple of half spins and an overshot he found himself way down in 17th early on, he needed to give himself a good talking to!

To be fair to Marty, he is another driver who also hadn’t driven the MK2 on gravel for the best of part of a year. He then spent the rest of the day fighting back up the leader board stage by stage to end the event in 5th overall behind the MK1 Escort RS1600 of Stanley Orr.

Orr had Grahame Henderson alongside him on the notes and together they topped the Historic Category 2 by posting top 5 stage times on all of the of stages throughout the first loop.

Orr, who was over from Ireland hadn’t seen Welsh gravel for some two years and although the second runs for him weren’t quite as good, the consistency remained with top ten times continuing throughout the day. This enabled him to not only secure the BHRC Cat 2 win but 3rd BHRC crew and 4th overall on the event. Orr and Henderson were also awarded the David Stokes Historic Challenge Ford Escort MK1 Award, in memory of the late great man who often rallied a MK1 Escort to many victories in the British Historic Rallying scene.

Elsewhere in the older machinery more variety could be seen, the Class B4 overall win went to the magnificent Volvo Amazon of Ken Davies & Aled Jones; they came home nearly two and half seconds ahead of defending BHRC Cat 1 Champ, Bob Bean & Malcolm Smithson.

Despite losing a handful of minutes on the final stage of the day (Gartheiniog 2) getting the Lotus Cortina out of a ditch, it was Bean that celebrated the Cat 1 victory in the BHRC.

The Hillman Avenger of Rory McCann & Tim Tugwell also brought a welcomed change to all of those Escorts, they beat the Escort Sport of Stuart & Linda Cariss to take the Class C1/C2 win in the BHRC Cat 2.

Also finishing 28th overall McCann who was over from the Isle of Man was on his first-ever outing on Gravel, and if that wasn’t going to be enough of an experience in itself, it was also his first time using a rear-wheel drive car in anger.

Another Escort, this time the MK1 of Simon Pickering & Colin Jenkins who won Class C3, while on the Category 3 front, Josh Browne and Jane Edgington powered their MK2 Escort Pinto home to the Class D3 win.

In a class of their own quite literally, the Volvo 244 of Bill Douglas and Mike Smith who completed the event to receive the Class D4 award they arrived home in 37th overall.

Despite running first on the road, (is this a good or bad thing? Are they road sweepers or do they get the best smoothest of stage conditions?) The Talbot Sunbeam of Malcolm and Ron Mounsey picked up the D1/D2 class award crossing the finish line in last position out of the 40 National A finishers.

As previously mentioned, Osian Price & Dale furnish won the National A rally and took the third spot in the Pirelli Welsh National Rally Championship but most of its contenders participated in the National B event in more modern machinery.

The overall rally win came from the 2018 Pirelli Welsh Junior Rally Champ Mathew Hirst with Declan Dear beside him in a Mitsubishi Evo IX. Quickest off the mark on the opening two stages of the day and with four fastest stage times, which was matched by Ieuan Rowlands in the MK2 Escort, Hirst takes maximum points for round 2 in the Welsh National.

Rowlands however, couldn’t quite prop up enough his four stage wins elsewhere, being beaten by the consistency of Freddie Milne & Patrick Walsh who managed six second-fastest stage times on the day. Leuan Rowlands took the runner up spot from Osian Price in the final few stages of the day for the Welsh National Championship points, as Milne is not registered.

Another crew not registered for the Welsh National were Marty McKenna & Martin Brady, they took to the Welsh stages in their Ford Fiesta WRC. Despite finishing 4th overall and taking the Class 14 award, the best they could muscle up was a single 3rd fastest stage time on stage 6 and a string of 4th fastest stage times. I guess some more seat time in the Fiesta is needed to challenge those EVO’s?

This meant that Class 13 winner Harry Gardener and Elliot Graham could not only bring home their Subaru Impreza STI in 5th overall but 4th in the Welsh National.

Another Rowland who was to have a pretty good day out in the trees as well was John in the other Rowlands MK2 Escort. He was mixing it up in the top 10 on every stage and top 5 on the odd occasion, topping the M5 Class he with Co-Driver Caron Tomlinson finished 6th overall and 5th in the Welsh National.

The second round of the BHRC heads north to Kielder Forest for the Pirelli Rally and the Pirelli Welsh National rejoins the BTRDA for the Rallynuts Stages.