The entry lists for the 2021 FIA World Rallycross Championship curtain-raiser in Catalunya next month (23/24 July) have today been revealed, with 17-car grids in both World RX and Euro RX3 setting the scene for a sensational weekend’s racing in Spain.

Bearing witness to the series’ enduring and burgeoning international appeal, there are no fewer than 16 nationalities represented across the two lists, as well as nine automotive brands – including giants of the industry such as Ford, Volkswagen and Renault – and 12 different models of car.

The World RX line-up is headlined by defending champion Johan Kristoffersson, who is chasing a fourth World Championship crown this year after switching to Audi machinery for the first time with KYB EKS JC.

The Swede will face a stiff challenge, however, from a number of corners, with 2019 title-holder Timmy Hansen and younger brother Kevin armed with the potent Peugeot 208 and Niclas Grönholm (GRX-SET) hungry to put his Hyundai at the front of the field. Nor should Kevin Abbring be discounted in the Unkorrupted Renault Mégane, particularly after his scene-stealing World RX debut in Norway two years ago.

A number of interesting ‘wild cards’, meanwhile, have the potential to spring a surprise, including two-time Euro RX Supercar (now RX1) Champion Timur Timerzyanov – an 11th-hour addition to the field with GRX-SET – ‘Flying Finn’ Juha Rytkönen, who made such an impression on his World RX bow on home soil at Kouvola last summer and double DTM king Timo Scheider, who spearheads a three-strong ALL-INKL.COM Münnich Motorsport assault. 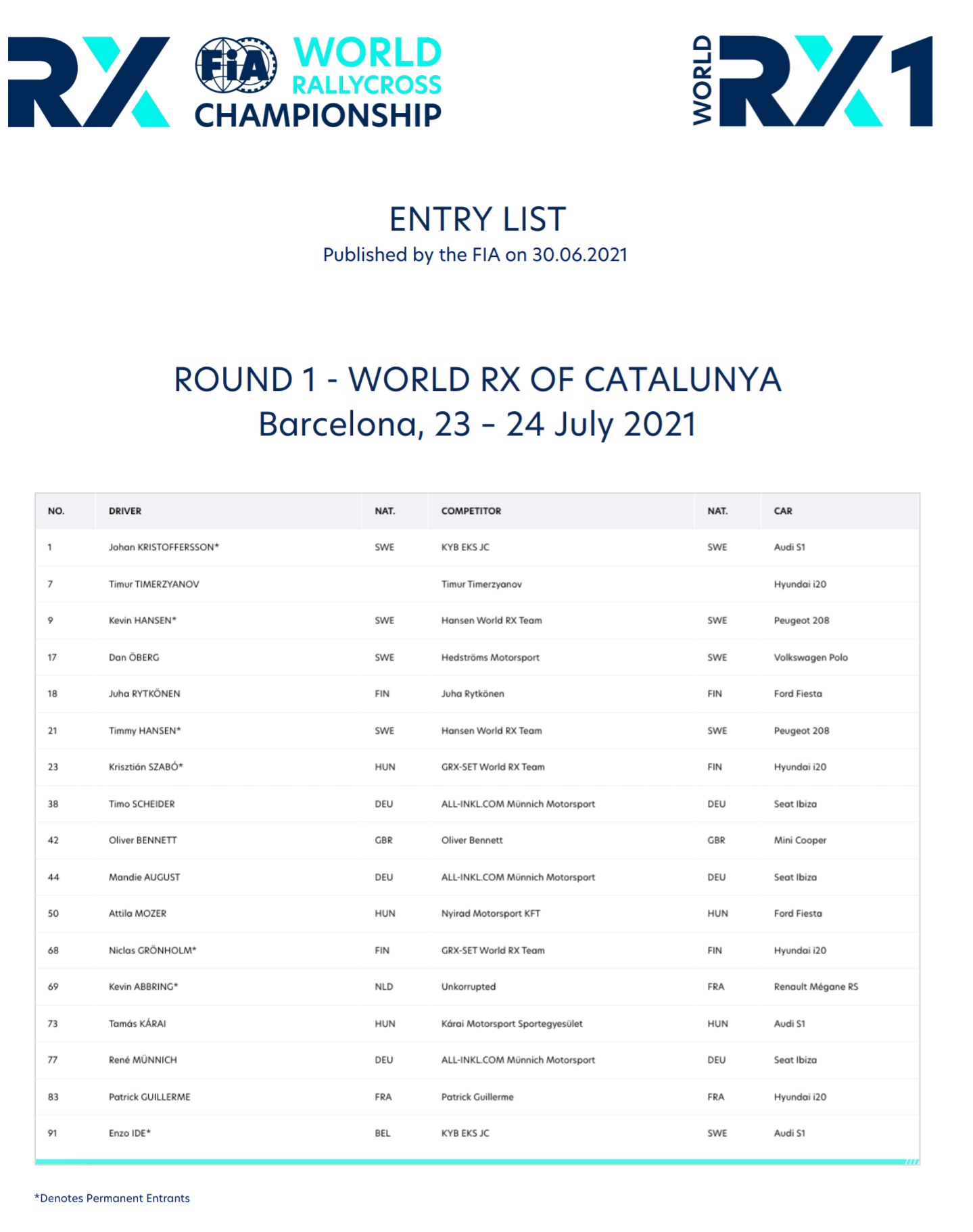 Five of last season’s top ten finishers in Euro RX3 (formerly Super1600) are back in action, with highest scorer Yury Belevskiy targeting the trophy denied to him in 2020, when cancellation of events due to COVID meant no title was ultimately awarded. He will need to fight off the threats, however, of Volland Racing stablemates Gergely Marton and Marat Knyazev, who have their sights similarly set on the spoils.

Series stalwarts Janno Ligur and Espen Isaksaetre both rejoin the fray following a year’s absence from the grid, while ex-Super1600 front-runner Kasparas Navickas returns for the first time since 2017. Jan Černý reignited his rallycross career last season after more than a decade away in rallying – tasting success in the FIA European Rally Championship along the way – and he is back for more in 2021.

There are also, intriguingly, seven rookies in the field, including Jiří Šusta – whose elder brothers Stanislav and Josef were both accomplished racers in their own right, and who will become the youngest driver in RX3/Super1600 history when he makes his debut in Catalunya – and Kobe Pauwels, who arrives with an impressive pedigree from international karting and CrossCar circles. 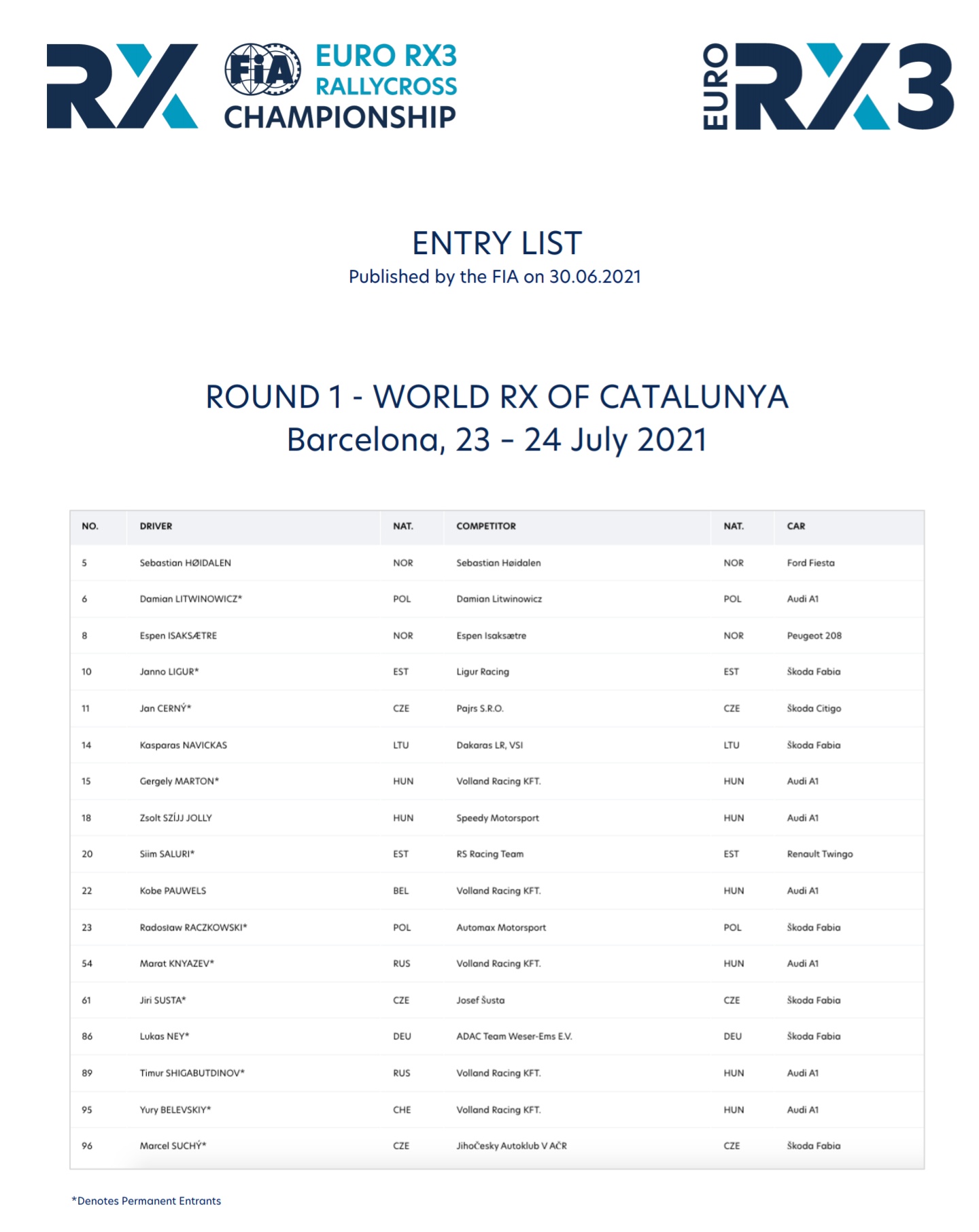 The entry list for the FIA RX2e Championship – the first-ever FIA electric rallycross championship – will be released at a later date, with a number of big names having already signed up to compete.