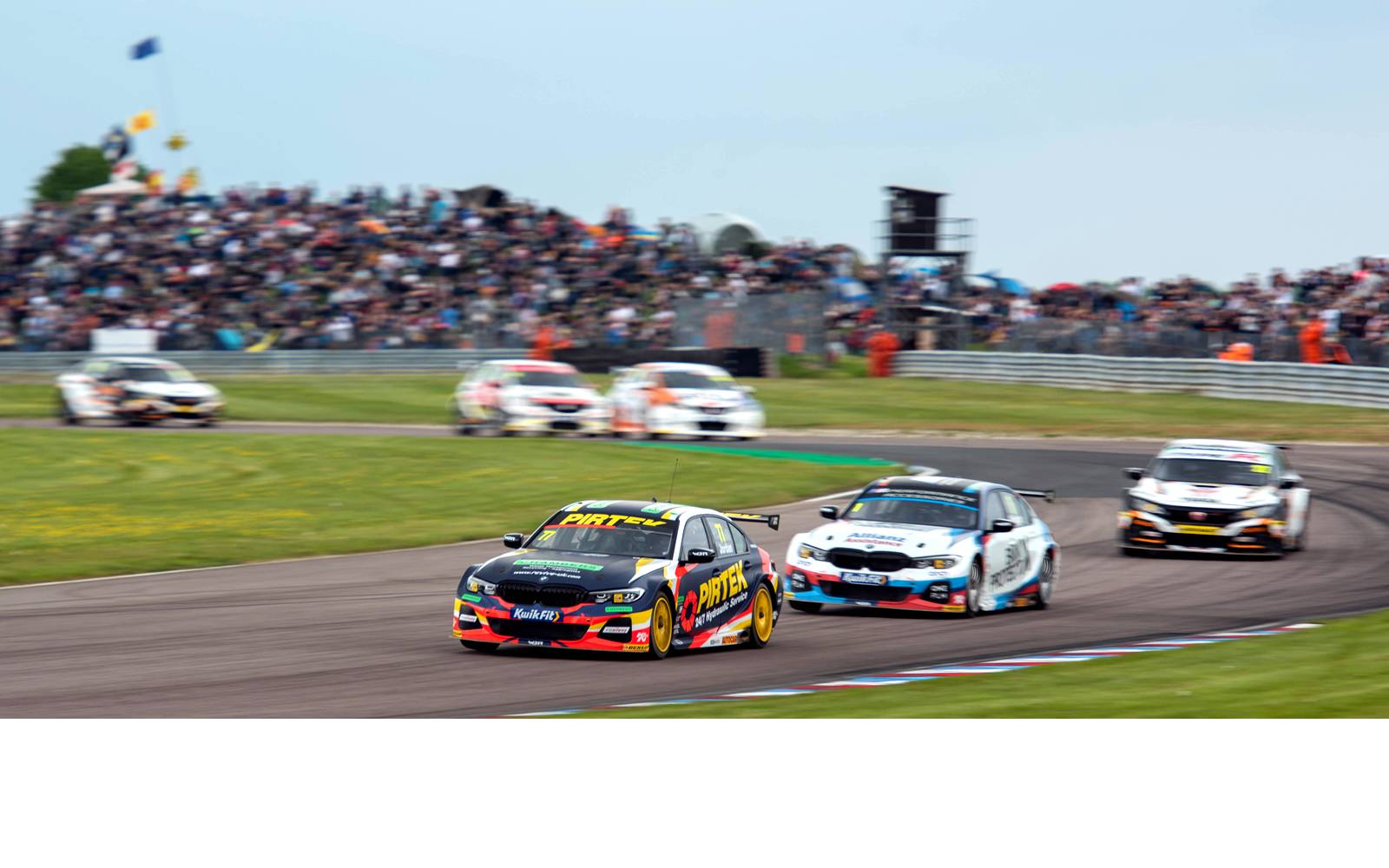 The third round of the British Touring Car Championship headed to Hampshire and the quickest track on the calendar at Thruxton. Ash Sutton went into the three race meet in the lead of the championship by a small margin, but the double race win at Donington by Colin Turkington had moved him up to third in the championship,  just behind Josh Cook. Parts of the Hampshire circuit had been resurfaced over the winter period, which would likely mean that what was already a quick track was probably set to become quicker with the increased grip on offer.

The qualifying session turned into a game of who could keep their time as driver after driver kept getting their lap times taken away for what the clerks of the course deemed to be track limit infringements, with at least a third of the field having times disallowed. This trend started with both Sutton and Jordan setting early grid topping times only to have them taken away rather promptly.

The ever improving and consistent Rory Butcher was the first to set a time which put him in pole position, he held on to this for a fair while until Colin Turkington popped in a time to take it off him, all the while more and more drivers were having their times taken off them.

Just before the end Andrew Jordan dislodged his WSR team mate from pole and looked to have the position sewn up before a red flag caused by a collision between Mark Blundell and Tom Chilton stopped the session.

A new rule this season was implemented by the clerk of the course, allowing the session to restart with the timer being reset to five minutes, allowing the drivers one last push to claim pole. Cammish made the most of this by setting a flying lap, only to be usurped by a last ditch qualifying record time being set by Sam Tordoff in his AMD Honda Civic to give him pole for the first race of the day on Sunday.

Race one saw Sam Tordoff make the most of his position and keep his first place ahead of Andrew Jordan who made a great start to take second position from Cammish. The opening few laps of the race was fairly settled amongst the leaders. Tordoff, Jordan and Cammish broke away from a second pack including Turkington, Butcher and Plato.

here was a bit more action just behind as Sutton and Neal set about squabbling for position, a brief coming together at the chicane sent Neal into a  half spin but expertly managed to thread his Halfords Yuasa Civic in-between two stacks of tyres and came out the other side unscathed.

About a third of the race had gone without too much incident, Turkington had pulled away from the second group and attached himself to the top three, where Tordoff seemed to be managing the gap between him and Jordan.

This was until the final few laps when Tordoff made a mistake coming out of Church corner and Jordan quickly caught up and overtook him before the chicane, and soon began to build a gap over his second place rival. This is how the race ended, and a great win for Jordan after the disappointment of the Donington round in which he ended up only taking part in one lap after a sizeable accident leaving him with a hospital trip and WSR with a big repair job to get the car ready for this weekend. Tordoff held off Cammish’s attempts to pass at the final chicane to round out the top three.

With the grid set by the finishing positions of the first race, Andrew Jordan sat in pole position alongside Sam Tordoff. He consolidated this position off the line and was joined by his team mate Turkington, on his 400th BTCC start, who stormed past Cammish on the line and got past Tordoff as they approached Campbell.

The bunching up of  the pack at the chicane at the end of the first lap caused a couple of problems further down the pack as Ollie Jackson and Chris Smiley had a small coming together dropping them down the order. Much like the first race this is how the positions stayed for the first half of the race. Cammish took it upon himself to try and dislodge the top two by moving past Tordoff at the chicane and into third in a hope of being able to split the two BMW 3 Series at the front of the pack.

Jordan looked determined to keep his position from his team mate, although Turkington looked racey, it seemed he knew Jordan would fight it out with him for the win, so settled on second. A logic that has seen him consistently score points helping him to secure three BTCC titles in the past.

Just behind them,  Tordoff dropped places to Neal and Plato, in which the old heads slugged it out for fourth and fifth positions. The drops of rain that started to fall didn’t hinder the drivers too much and Jordan held on to win ahead of his team mate and another podium for Cammish in third.

The reverse grid draw for the final race of the day saw Sutton, who was leading the championship at the start of the day and carrying maximum championship ballast, drawn on pole position, alongside friend and adversary Josh Cook.

The day  had seen no safety car intermissions up until this race, this was soon to change as the last race became a little feisty. Cook managed to catch and pass Sutton as they arrived into the complex taking him into the lead.

Just behind him Collard got sideways as Morgan, with nowhere to go slammed into the side of him causing the first safety car of the day. Hamilton took this opportunity to take a gamble on wets as rain started to become heavier, the gamble didn’t pay off and he was soon back in after a few laps with shredded tyres as the rain stopped and track dried out.

Cook led the pack behind the safety car and stayed in front of Sutton, who was soon dispatched by the ever improving Rory Butcher who attached himself to the back of Cook’s Civic. The second safety car came out soon after as Carl Boardley went into the side of Rob Smith’s already spinning MG.  At the restart Cook again held off the cars behind to stay in front.

A few places back Andrew Jordan was tagged by Stephen Jelley into a spin at the complex in a disappointing end to what had been a good day up to that point. Cook slowly started to pull away from Rory butcher who was driving on the edge to hold off Ash Sutton in third, and that is how the positions stayed until the end of the race.

The championship standings are tighter than ever as the BTCC leaves Thruxton. Turkington sits at the top equal on points with Rory Butcher, who again is proving how good a driver he is as each round passes. Josh Cook is in third after an impressive win in the final race after finishing in 11th and 10th position in the first two races, while Ash Sutton is only three points behind him.

Apart from a disappointing end to the third race, the day belonged to Andrew Jordan, determined to put the disappointment of the previous round at Donington behind him and battling it out with two race victories.

The series now moves onto Croft in Yorkshire, where Ash Sutton will be hoping he can replicate last year by getting victory in two out of the three races.