After a delayed start to its season, the 2021 FIA European Rally Championship finally got underway with the 77th Rally Poland. This rally last ran as part of the ERC in 2019, where Russian Alexey Lukyanuk won the event; this year the rally featured 202km over 14 stages of fast and flowing gravel tests. 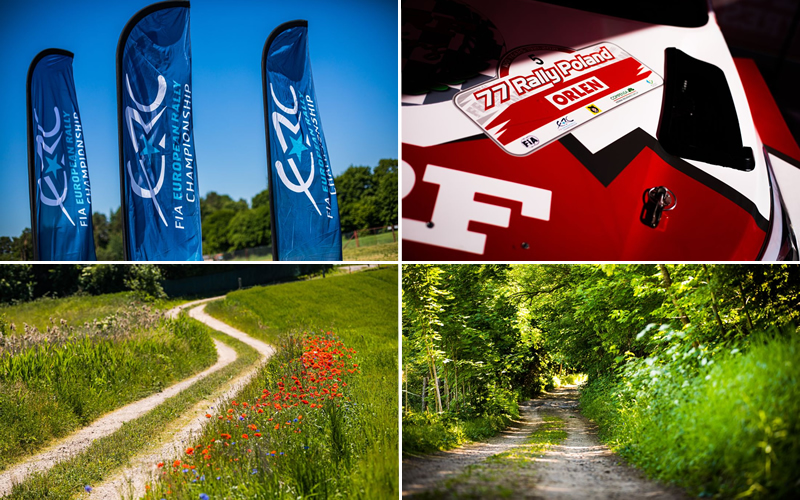 Last years champion Alexey Lukyanuk returned to defend his title but would be up against some stiff competition on this opening round, with the likes of Andreas Mikkelsen (Skoda Fabia – TOK Sport WRT), Craig Breen (Hyundai i20 R5 – Team MRF) and Nikolay Gryazin (VW Polo GTI R5) all taking part. 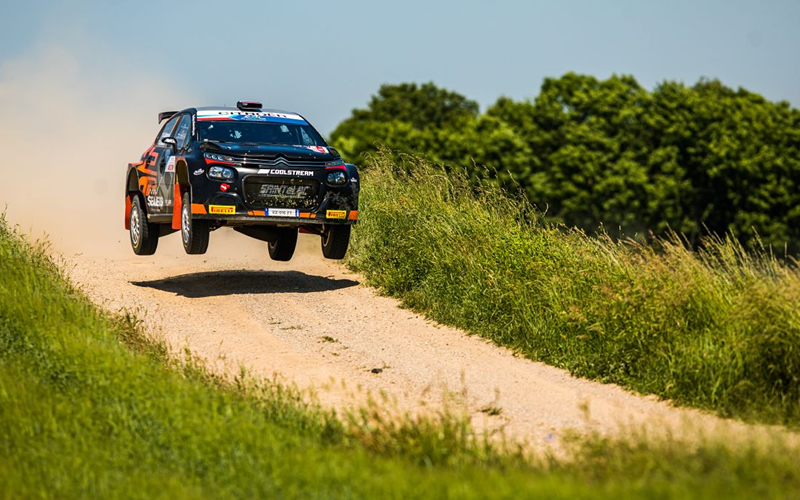 A short 3.2km shakedown test took place on Friday morning where Lukyanuk topped the timings ahead of Mikkelsen. This was followed by a short 2km opening super special stage, SS1 Mikołajki Arena in the evening to get the action underway. 2018 Rally Poland winner, Nikolay Gryazin was the man to get the first stage win of the rally. 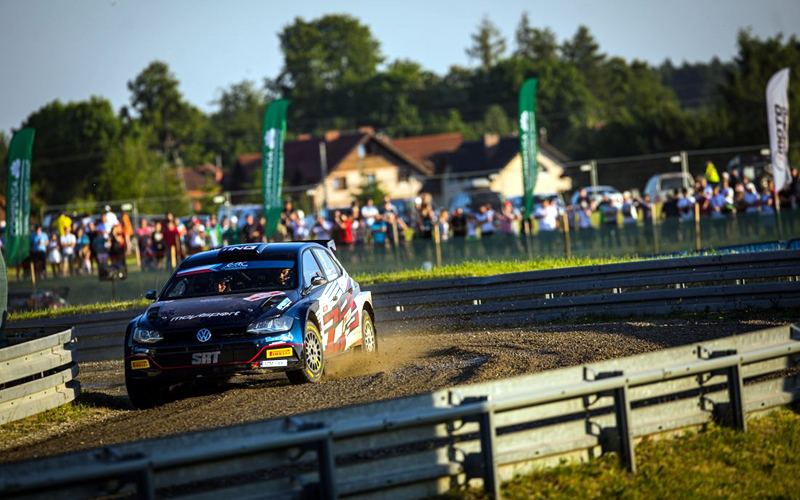 The main bulk of the rally (133km) was run on Saturday and overnight leader Gryazin was once again quickest off the mark on the opening stage of the day; getting the better of his fellow Russian countryman Lukyanuk by some 13 seconds. 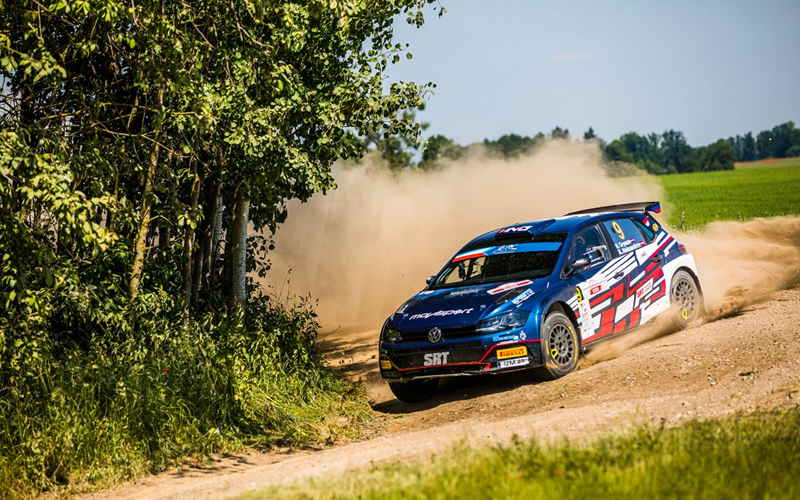 The morning’s loop produced a battle up front for the lead between Gryazin and Lukyanuk, with Gryazin heading back to the midday service some 35 seconds lead over Lukyanuk after winning all of the mornings’ loop of stages. 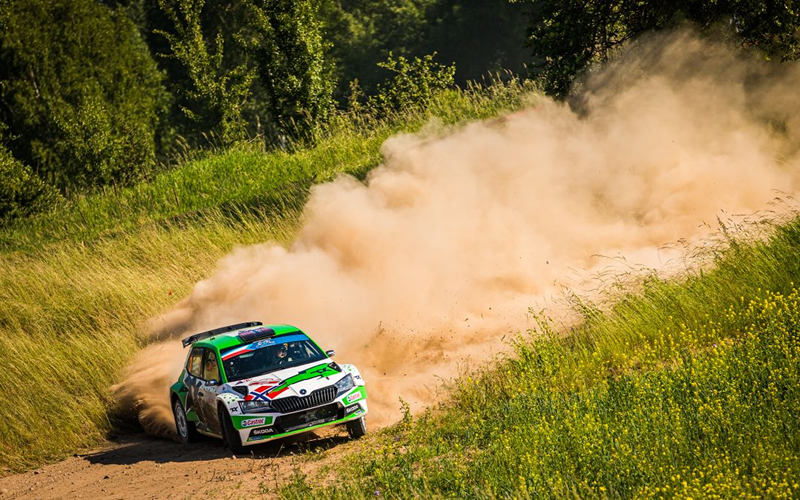 Behind the pair of Russians, Andreas Mikkelsen and Craig Breen fought it out for third. Trading places over the first couple of stages of the morning until stage 4, the 28km long Wieliczki test where Breen was struck with mechanical issues. This would see the Irishman lose more than a minute and dropped him down to 7th and out of the fight with Mikkelsen for the podium spot. 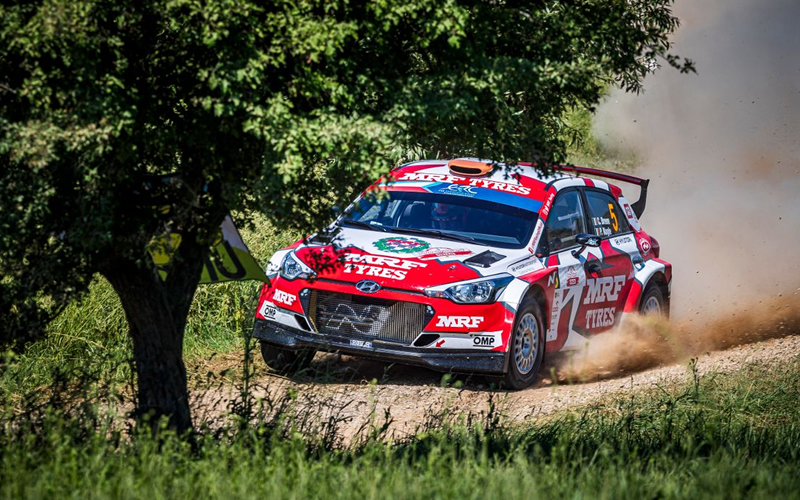 After service, there was a repeat of the three morning stages with one final run over the Mikołajki Arena super special stage. Gryazin set about continuing on his ways and won the first stage of the afternoon (SS5 Świętajno) to advance his overall advantage to 40 seconds. 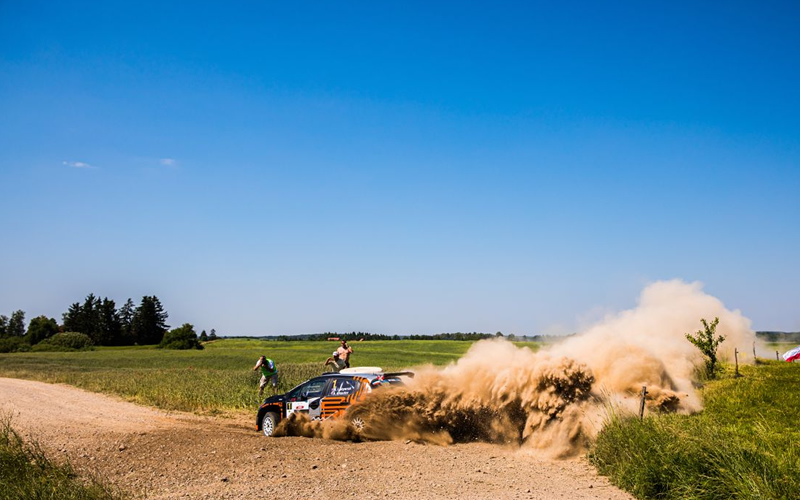 At this stage in the rally Lukyanuk simply had to act or Gryazin would run away with the win. And so on SS6 Lukyanuk finally got his first stage win of the rally; but that was only by the slenderest of margins, just 0.1 seconds which didn’t make a dent on Gryazins lead in the slightest. 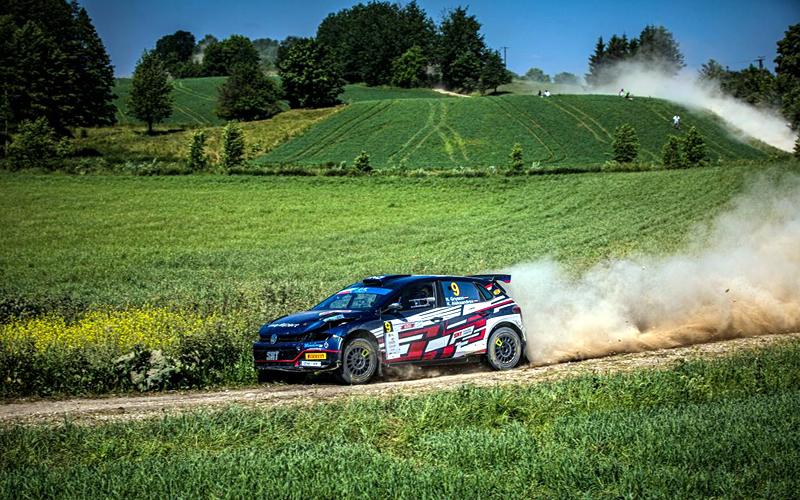 The turning point in the rally would come on the very next stage where the Gryazin was hit with two punctures; this unfortunate stage had lost him the rally and he eventually retired from the rally before the final stage of the day. 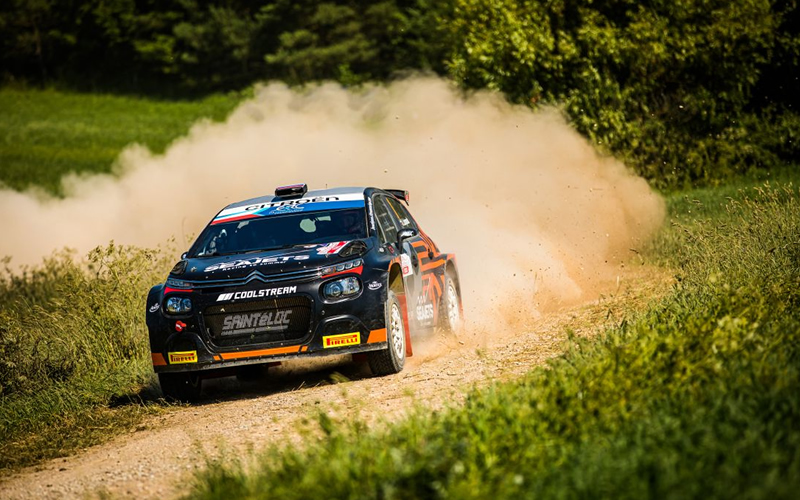 Gryazins demise handed the lead over to Lukyanuk and promoted Mikkelsen into second, who was some 28 seconds behind the new rally leader heading into the final day of the rally.

“It’s nice feeling, happy with our strategy for the afternoon, thanks for an amazing day to everybody, it was a good day, it’s amazing to be back on the gravel, good car, good setup.” 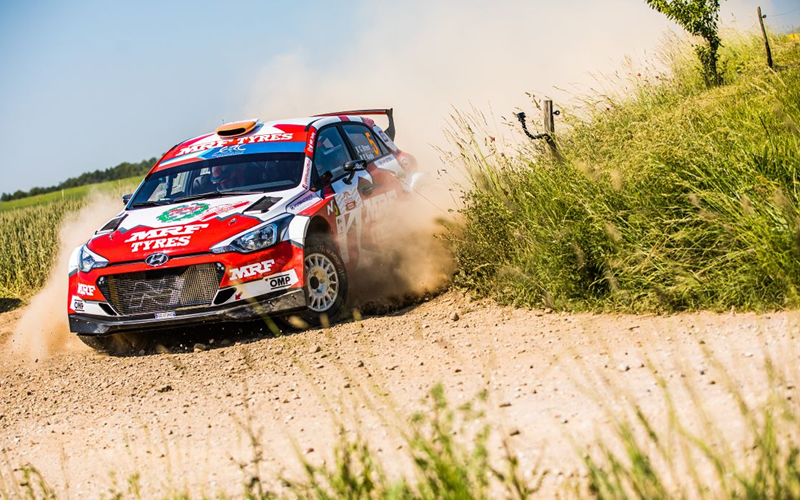 Elsewhere Craig Breen had managed to drive his MRF Hyundai back into 5th by stage 6, however, his efforts would be in vain. On SS7 the repeated Wieliczki test he would once again run into difficulties, this time a hidden rock on the racing line was enough to break his rear suspension and retire him for the day. We have seen similar failures to the Hyundais in the World Rally Championships, so could this be a potential weak point to the R5 version of the car also?

The final leg of the rally was shorter at approx 70km but this was spread over a further 6 stages, with the final stage and finish held in the capital Warsaw as part of the famous event’s centenary celebrations. 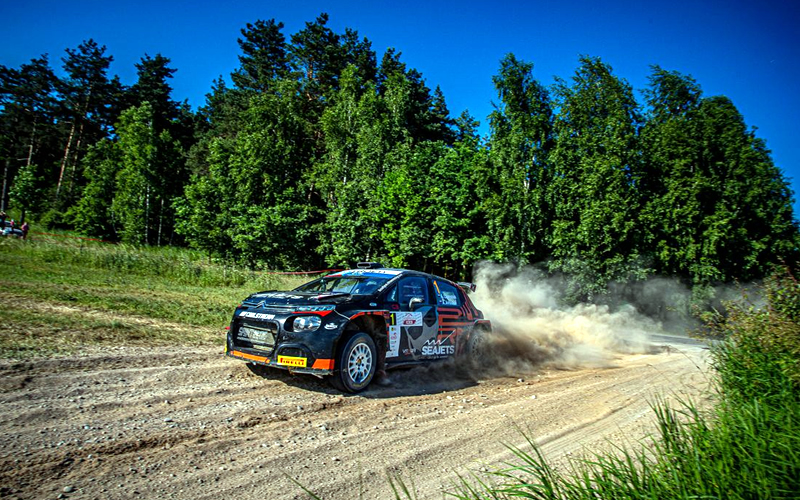 Alexey Lukyanuk headed into the final day with a little under 30seconds lead to Andreas Mikkelsen and started the morning with the first stage win of the day; beating Mikkelsen by approx 2 seconds. A super rallying Craig Breen stepped up next to win the next stage (his first of the rally) before the service halt. 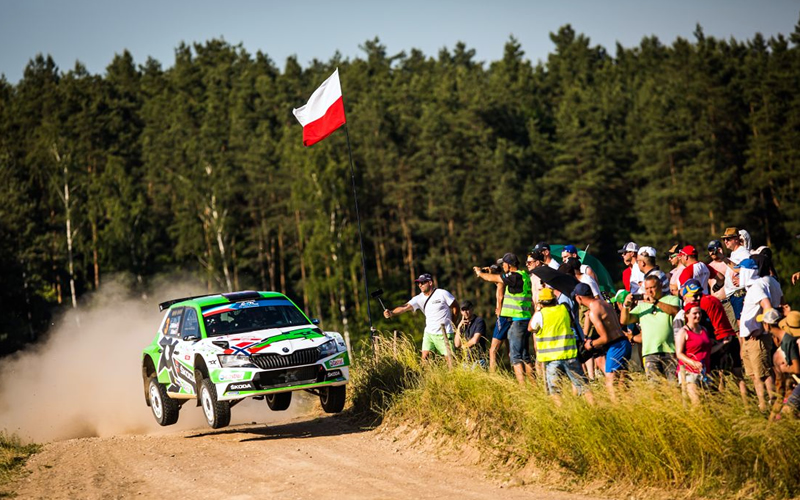 Mikkelsen must have made some positive changes to his Skoda Fabia in service, he went on to grab two stage wins on repeated stages SS11 & SS12, to close the gap to Lukyanuk upfront to 22 seconds.

“We try to have a little bit of fun and apply some pressure, it’s never over until it’s over. We had a clean run.” 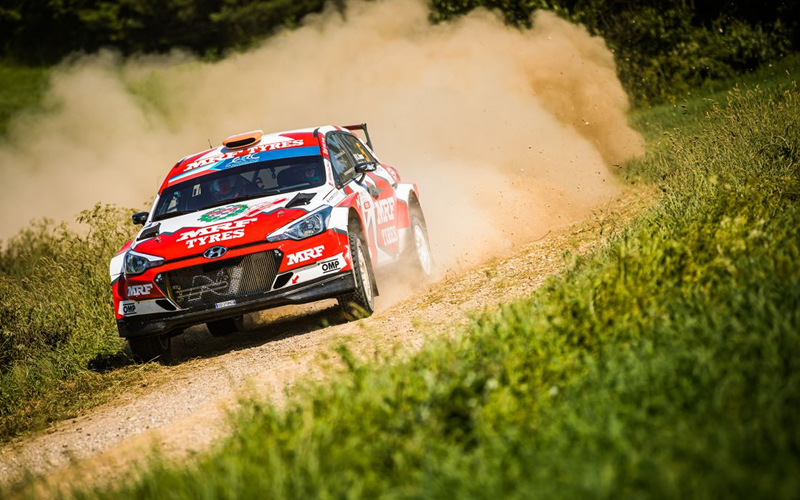 On the penultimate stage (SS13 Przasnysz) of the rally Breen posted his second stage win ahead of the second place man Mikkelsen, while rally leader Lukyanuk was playing it safe to ensure that he made it to the end of the rally. 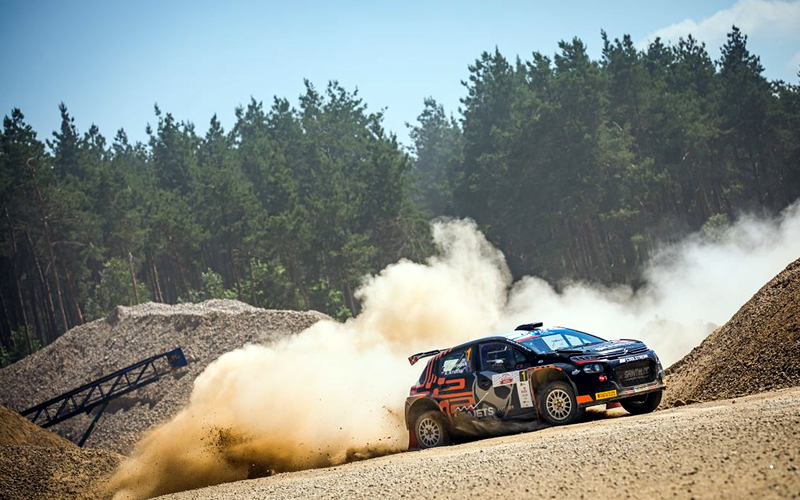 Lukyanuk headed into the final Warsaw super special with a 17.4 second lead over Mikkelsen and pretty much had one hand on the trophy by this point. Craig Breen took the last stage win of the rally but the opening round of the 2021 FIA European Rally Championship was won by the defending champ, Lukyanuk.

“This rally was extreme, we turned out it in victory. Many fast drivers here, just happy to be here today.” 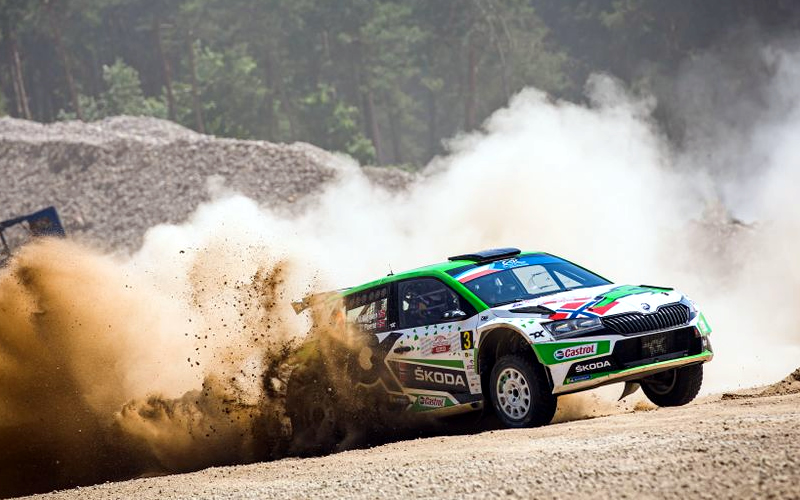 It is hoped that the second round will take park in Lativa at the Rally Liepāja on July 01-03, an event that has been part of the ERC since 2013.