Finally, our annual pilgrimage to Gods own back garden, Wales had once again come around and with it our first chance to experience the all-new 2017 beasts in action. Watching the WRC on TV screens really doesn’t compare to the real-life sights and sounds of these machines on the limit in a Welsh forest. It’s time for the penultimate round of the 2017 FIA World Rally Championships (WRC), The Rally Of Legends, Wales Rally GB where a truly EPIC ending would unfold in front of a mass of home rally fans. 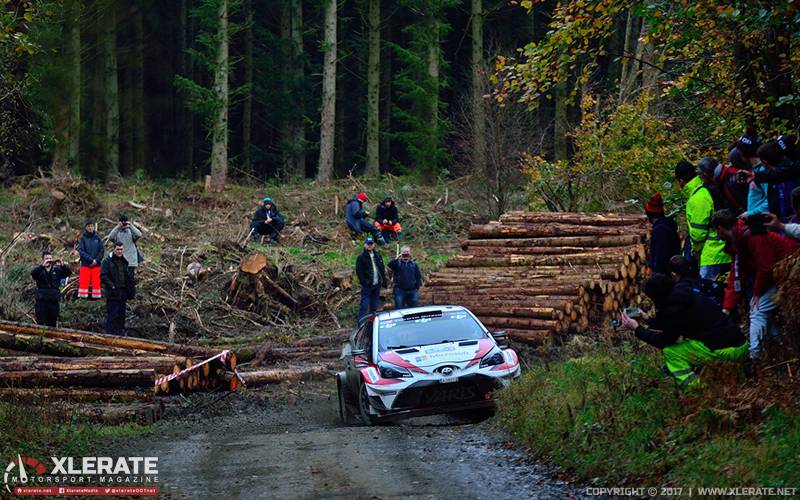 As normal the action kicked off early Thursday morning in the east of Clocaenog Forest for Shakedown but the drama was already unfolding out on the main road at the entrance for the spectator car park before the action had even kicked off. This year the event had attracted a huge amount of spectators, more than the previous couple of years and due to the nature of shakedown with it being a single venue in a rather small part of the forest, there’s no wonder the car park got full so quickly. This resulted in a lot of rather un-happy rally fans all anxiously worrying if they were going to be able to get into the trees in time for the action or not. Now we are getting a little tired of Cloc East being used for Shakedown, so maybe it could be time for a wee change? 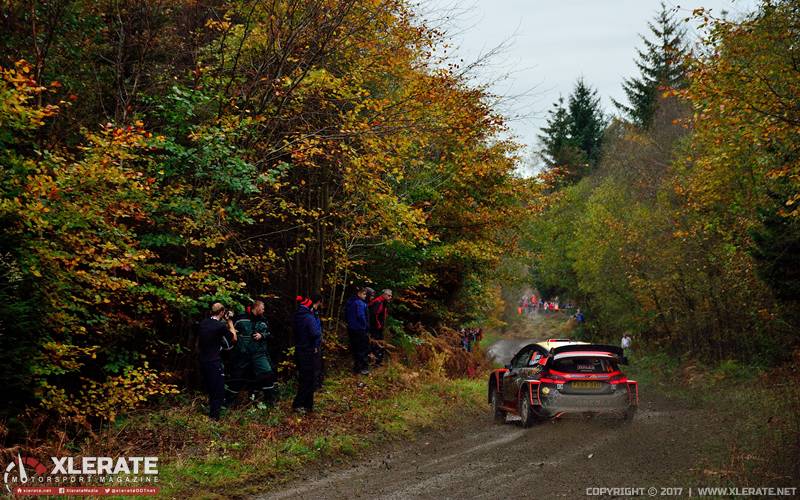 The weather was fair and as usual, the light wasn’t great early on but there was a good sense of atmosphere amongst the fans as they watched the World’s best putting in their practice runs. Not too much to report from the morning really, other than our very own Welsh crew of Elfyn Evans and Dan Barritt in the D-Mack Fiesta topped the timings, was this a good sign? Once things had died down we headed north for SS1 Prince Tier; a new feature for this year’s event and we even managed to sneak in a quick dirty burger at Route 66 across the road before the action kicked off under the floodlights on the trotting track. The Frenchman with the number 1 on the door; Seb Ogier went into the overnight lead after SS1. 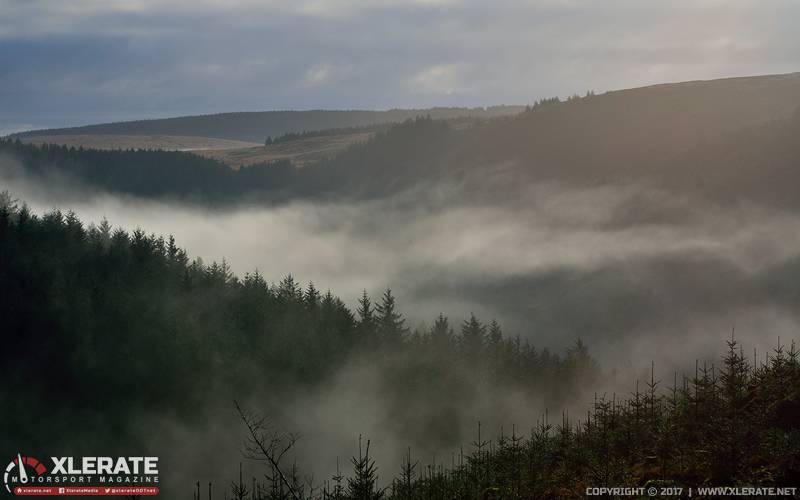 Come Friday morning it was time for the proper stages out in Mid Wales, we returned to one of our favourite stages in this area, Myherin. Despite us arriving at what we thought would be a fairly decent early time we still had a bit of a trek having only parked halfway up the iconic Pikes Peak section which this year was not being used as part of the stage, “hmm there’s definitely an increase in spectator numbers this year” we thought to ourselves. A brief glance across to the Wind farms area where “Elyn’s Corner” had been set up we could see that the spectator sheep pens were packed up on the hillside and were being closely guarded by an army of marshals, so we headed for a more quieter part of the stage to catch the action. 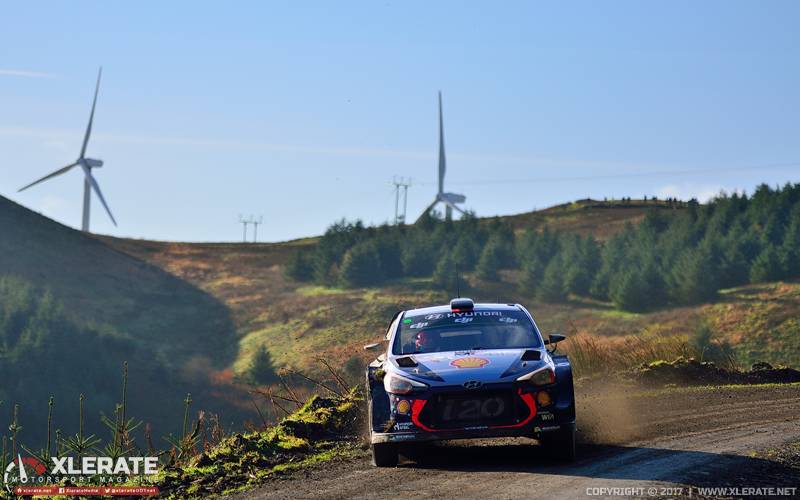 As we walked to our chosen spot for the morning’s action something was different from what one would normally be expected for Wales at this time of the year, this was the weather. As the mist rose above the countryside; bright sunshine shone down on us which left us wondering why didn’t we pack our shorts? We found a nice open bend with good views of the wind farms in the background and what we hoped would provide some entertainment. The front runners were awesome here after the first handful had passed our friends from Black Mountains Media said to us “I bet Meeke will be good here” and sure enough he didn’t disappoint. He was so close to pushing it just that little bit too far; finding the very edge of the track with his rear wheel and kicking up a shower of mud much to the delight of the group who had gathered at this spot. 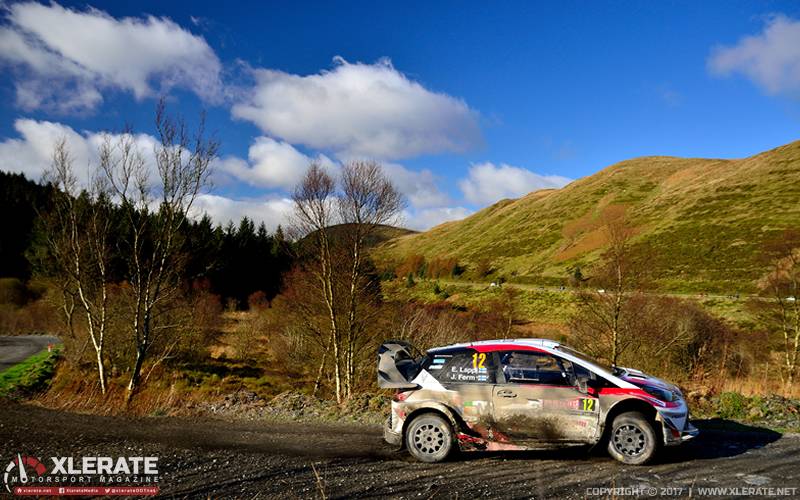 By the end of the morning loop, our boy Elfyn was in the lead over second-place Ott Tanak from Estonia also in an M-Sport Fiesta. The weather for the afternoon was just as nice with clear blue skies, it really was a pleasant change, considering that the last few years the weather has been a bit of an endurance. To kill some time between stage runs we went for a bit of walk heading a little further towards the end of the stage and came across another decent flowing section, making it two new spots that we’ve never done before. At the close of play for leg 1 Evans and Co-Driver Barritt had extended their lead over Tanak to nearly 25 seconds with teammate Ogier taking up the third position who was looked to be beginning to set himself for the overall driver’s championships win. 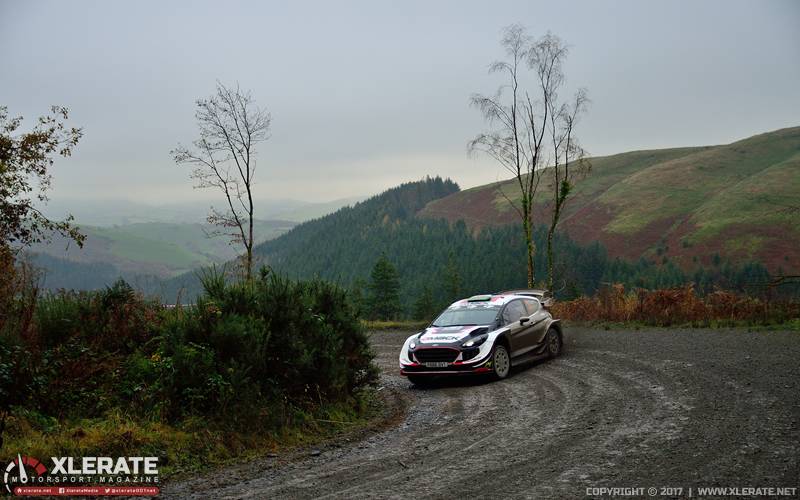 Saturday morning had arrived and with it a return to the gloomy weather, parking up in Dyfi Forest in the early hours and in the dark was once again an art, a special mention has to be made to the chap in the brilliant white and rather low, brand spanking new Porsche 911 who seem have gotten rally and track racing mixed up; as he tiptoed down the gravel forestry track trying not to damage his pride and joy…. “DUDE! you’ve brought the wrong car for this!”. We put in a good 45 minute or so walk to find a nice quiet spot in the middle of the Dyfi Forest complex in search of a view, it was a shame about the mist and rain which lessened the results but hey, it’s Wales in October!. It was an early start to a long day as crews had already completed runs thru Aberhirnant, Dyfnant and Gartheiniog before reaching us in Dyfi; by which time Belgium’s Thierry Neuville in the Hyundai i20 had pinched third place from Ogier. But all was good in our eyes as the Welsh lad had continued to increase his lead over Tanak; which could only be expected seen as this part of Wales is practically in his own back garden. 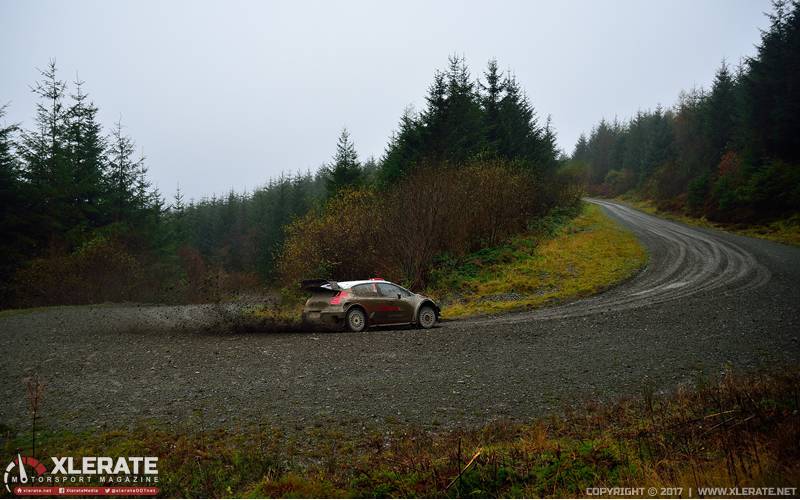 By the second run thru Dyfi there was a little bit of shuffling around on the leader board but nothing too significant, our other British interest, Kris Meeks in the Citroen C3 was lying in 7th ahead of Kiwi Paddon in the Hyundai i20 and just behind Finland’s Latvala in the Toyota Yaris, we rally was hoping for more from him. With a short Mickey mouse family-friendly spectator stage at Cholmondeley Castle; before a service break, crews headed back out into Aberhirnant and Dyfnant for two-night stages where “Le Maestro” Ogier managed to just sneak back 2nd place from Neuville going into the overnight holt before the final day. 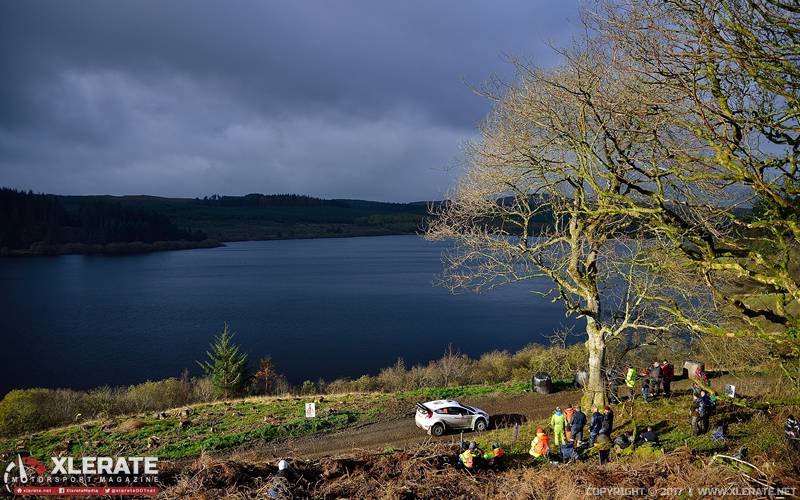 The opening stage on the final day was in the forest overlooking the picturesque Alwen Reservoir where we watched Neuville take back second from Ogier, he then went on to beat him on the following stage Brenig and won the Gwydir stage showing that he really wanted to prevent the reigning champ Ogier from taking the title in Wales, but was it already too little too late from Neuville? the maths simple weren’t adding up for him. 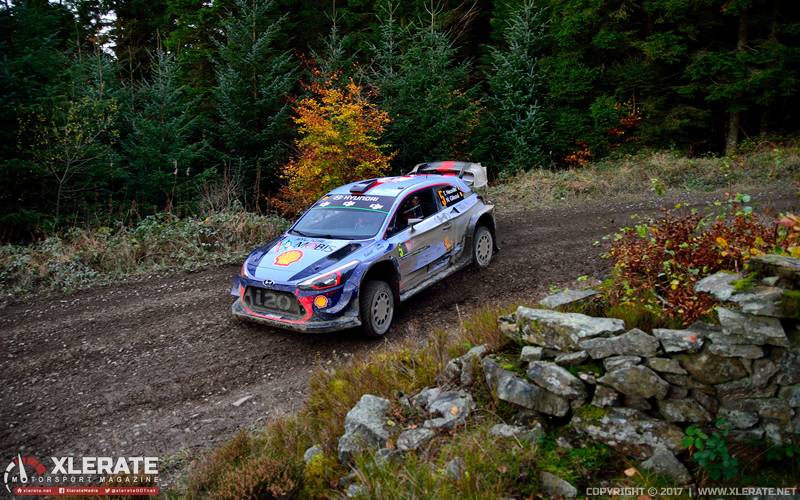 Over the final two stages of the event, Alwen and Brenig there were no changes to the top 10 on the leader board. In front of thousands of rally fans, local boys Elfyn Evans and Dan Barritt took their first-ever WRC win in the D-Mack backed Fiesta and with it the first win for the British tyre manufacturer. A massive gesture from departing M-Sport driver, Ott Tanak who was heading to Tommi Makinen’s Toyota Gazoo Racing outfit for the 2018 season, handed the 2017 Drivers title to teammate Seb Ogier and with it Malcolm Wilsons Cumbrian based M-Sport outfit sealed the manufactures title.

And there you have it, a truly magical end to another Wales Rally GB, The Rally Of Legends, one that will no doubt remain on the memory of many for years to come.

What a rally and what a result for British Rallying!

UKRALLY | THE WAY IT USED TO BE | ROGER ALBERT CLARK RALLY 2017
error: Content is protected !!