As the sun rose over a picturesque Arctic Circle, the crews faced the main bulk of the rally, with 144km spread over 6 stages (3 stages repeated in two loops). Leg 2 of this second round of the FIA World Rally Championships was the longest of this short 10 stage event but would deliver plenty of moments and drama for some.

Overnight Rally leader, Ott Tänak entered the day with a 16.2 seconds lead over his fellow Hyundai team-mate Craig Breen. Whilst his Championship rival, Sébastien Ogier who battled with his road position on the first two stages of the event on the opening day would continued to struggle.

For Saturdays restart, reverse road order would see the Frenchman, Ogier face the 6 stages with at least a couple of other cars on the road in front of him. However, with a time difference of over 49 seconds to rally leader Tänak, it was going to be a tall order. 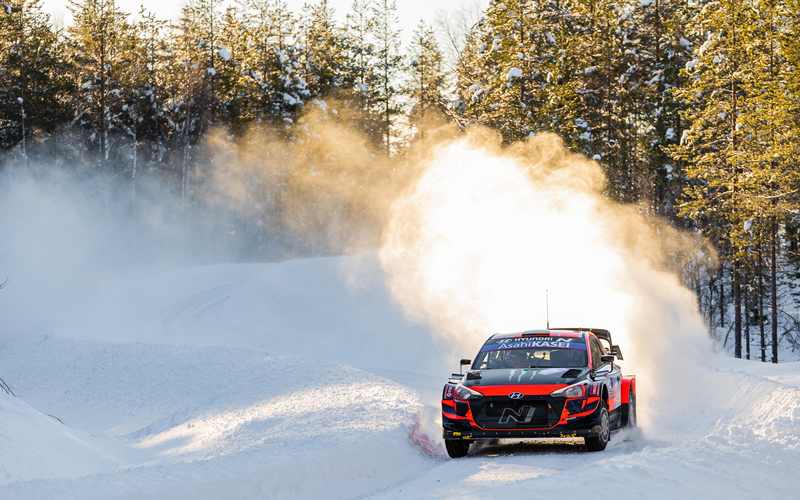 The Hyundais kicked started the day off by dominating the timesheets on the opening 24km Mustalampi stage. Tänak once again fastest with team-mate Thierry Neuville close behind, just one second off his time. Hyundais newest WRC recruit Oliver Solberg had an immense start to the day posting the third-fastest stage time.

“It’s amazing. It felt quite good, but I couldn’t find the rhythm at the beginning, it was so difficult and narrow. Once I found the rhythm it was good.” 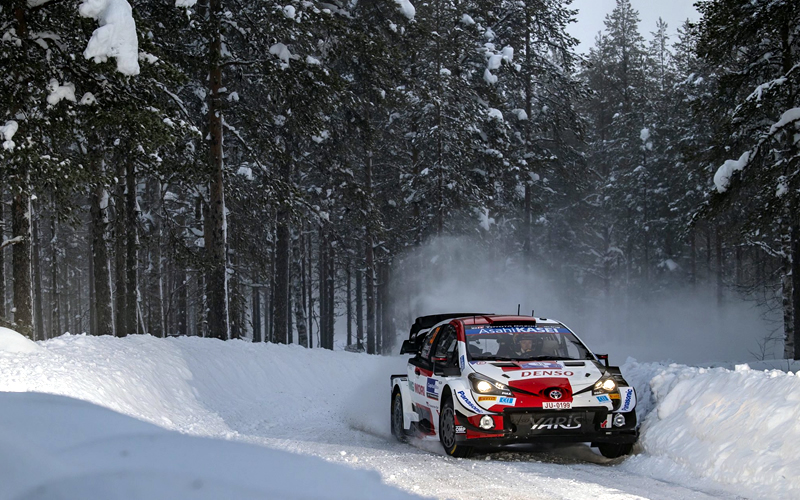 Welshman Elfyn Evans in the Yaris was the first man to prevent Tänak from a clean sweep of stage wins. On the shorter second stage of the morning loop, Kaihuavaara the Toyota driver finally managed to beat the Hyundais on this fast stage where average speeds increase to around the 130kmph mark.

“It’s a fast stage, for sure some places could have been better still, but when it’s so fast you have to make sure your notes are right first. All okay.”

Normally one would have thought that the Yaris being a smaller wheelbase car would have been better suited to the slower tight and twisty technical stages. But it wasn’t just Evans who got the better of the Hyundais here. His team-mates Rovanperä, who reported that he “didn’t have the feeling with the car” and Ogier who was “On the limit” both also joined Evans making it a Toyota trio at the top of the timesheets for this stage. It perhaps gave the Finnish based team a glimmer of hope of the possibility of a fightback…. or perhaps it was just a one-off because Tanäk had trouble with activating his windscreen wipers following a moment with a snow bank? 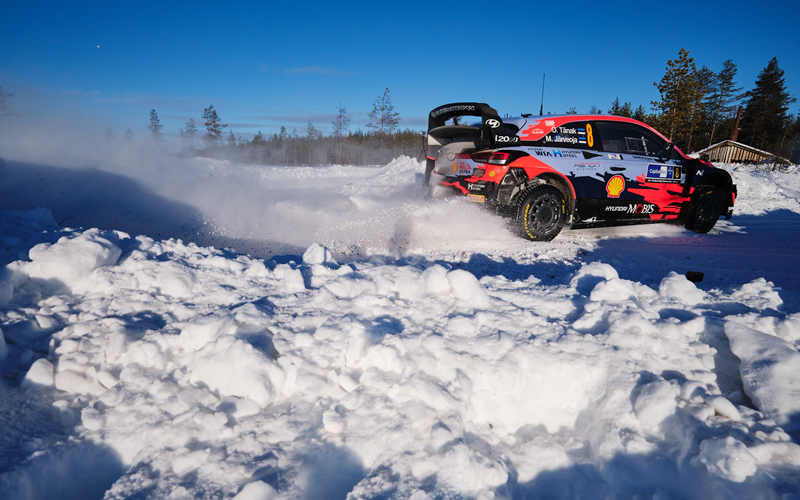 Normal service was resumed on the final stage of the morning loop, the 24.4km Siikakämä stage, another fast stage which had been likened to Kielder Forest in the UK with its long straights and sharp bends waiting at the ends of them. It was here where the rally leader Tanäk scored his fourth stage win of the event; heading into the mid-day service with a 21 second lead over Finlands Kalle Rovanperä.

Rovanperä had a mixed morning, but had managed to overhaul the Hyundai i20 of Irishman Craig Breen over the loop of stages to take up second place overall; but he was adamant that he needed to improve.

Back out after service, the Hyundai pair of Tanäk and Neuville both pushed hard in their quest to win the rally for Hyundai. Tanäk just pipped Neuville for his fifth stage win (Mustalampi 2) beating the Belgian by just 0.2 seconds. However, in his quest to keep up with the Tanäk, Neuville had seemingly neglected to manage his tyres. 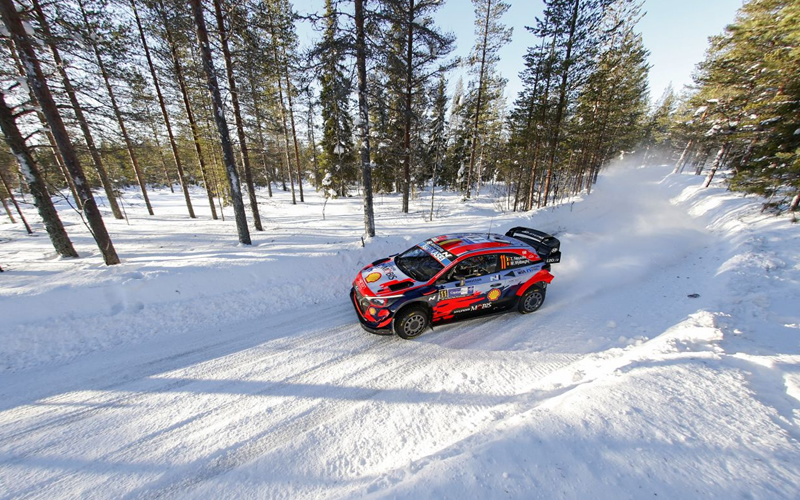 “Maybe I did a little too much on the tyres. I felt them going suddenly and we didn’t experience that at all in the testing. We will try to manage for the next stages.”

Kalle Rovanperä appeared to be refusing to give up in his attempt at bringing the fight to Tanäk, you could tell that he wanted to win this rally so badly. But despite taking his second stage win of the rally on the repeated run of Kaihuavaara, Tanäk was still there leading. With only one stage remaining on this main leg of the event, which was to run in the darkness, the young Finn had to keep his head for the remainder of the rally. After all the runners up spot on the podium was at stake here. 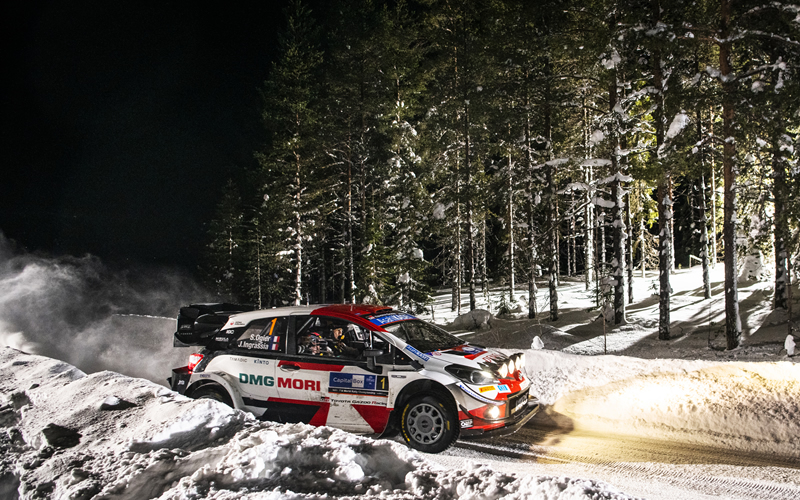 And so darkness fell on the final stage of the day which would brought drama on the final corner for Sébastien Ogier. The opening round Monte Carlo winner had struggled with his road position and entered the stage some 1min 16 seconds off the rally lead and more than 21 seconds off the top 5. It was to all go wrong on pretty much the final corner of the stage, with the finnish line in sight the Yaris was sucked into a snowbank and beached itself. With the lack of spectators around to assist, Ogier and Co-Driver Julien Ingrassia were left digging their way out, losing a bucket load of time, they then cruised to the stop line where Ogiers face said it all.

“Last real corner – we went a little bit too sideways and caught the bank. It’s a shame, but it’s a weekend to forget.”

Neuville alongside his new Co-Driver Martijn Wydaeghe secured their first stage win of the rally here and only their third ever together. On the final stage of the day in the dark they blew team-mate and rally leader Tanäk out of the water by some 12+ seconds.

“It was a really good stage. The car was working really nice and I tried to save my tyres throughout the whole stage. It was a very clean run and the communication is better, but we can still improve.”

But The Iceman Tanäk was playing it cool saying “It went to plan. The tyres were quite tired, so it was important to get here without any mistakes.”  The Estonian ended the day with a 24 seconds lead over Toyotas Kalle Rovanperä in second and was now surely perfectly positioned to go down in the history books as the first victor on the first World Rally Arctic Rally? 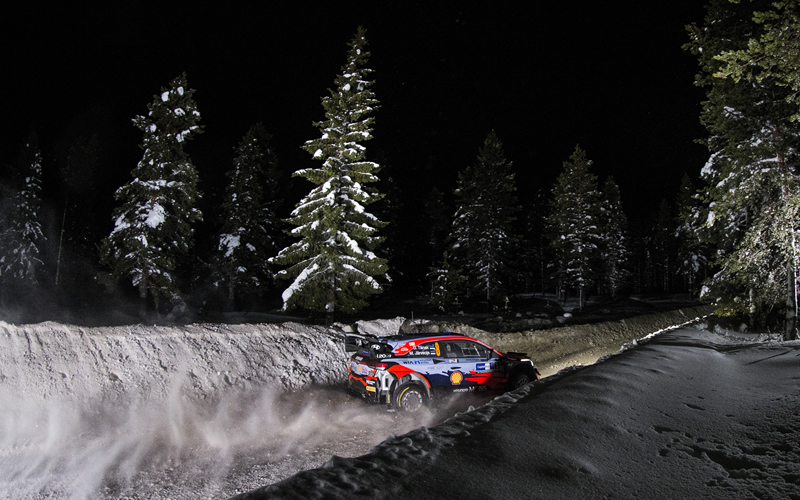 With just 44km over two stages (one repeated stage) to go, surely, the young Finn Rovanperä would now have to forget chasing down Tanäk for the win and concentrate on defending his 2nd place and slim lead over Thierry Neuville who was now just 1.8 seconds behind him in third. 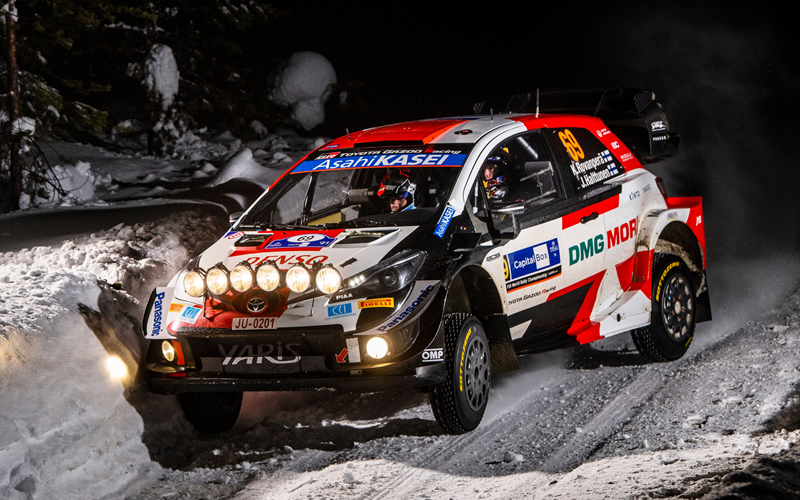 “I think Thierry made the right choice with the tyres. It was really clever of him, I have to say. Tomorrow we have to push and we will see what we can do.”

There’s no doubt that the Belgium smells Finnish blood and will give it his absolute all to take the second spot away from Rovanperä on the final day of this Arctic Winter Wonderland Rally, 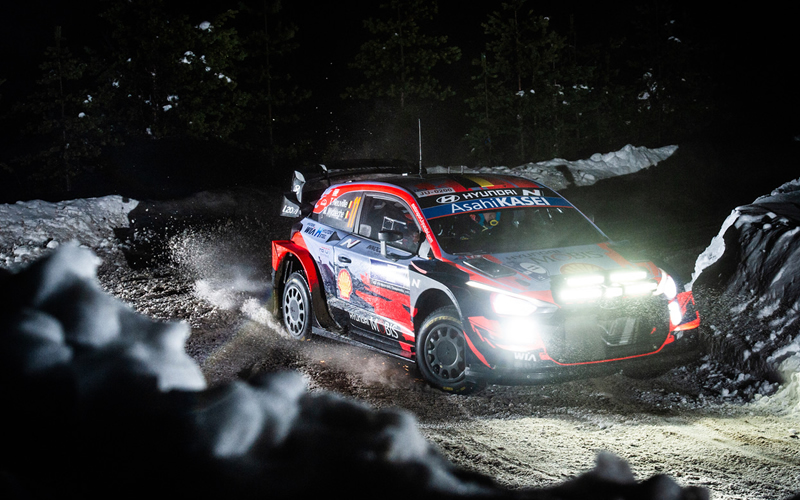 “It was a really good stage. The car was working really nice and I tried to save my tyres throughout the whole stage. It was a very clean run and the communication is better, but we can still improve.” 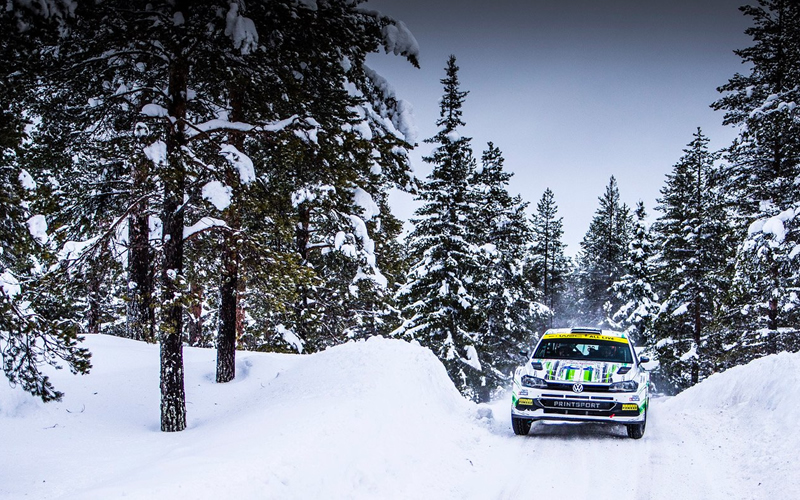 In the WRC2 class, Finlands Esapekka Lappi dominated the class in the Volkswagen Polo GTI, winning all but the last stage. He ended the day with a 33.1 second lead over Toksport’s Andreas Mikkelsen in the Škoda Fabia Evo, with Nicolay Gryazin in another Polo rounding off the top three.