THE MORNING AFTER THE NIGHT BEFORE

Overnight rally leader Sébastien Ogier led the field north of Monaco to the area around the Mercantour National Park in the Alps for a further 6 stages totalling at just under 98km. The stages featured on the second leg of the rally were typical Southern France tests: Roure – Beuil (SS3/6) at 18km, Guillaumes – Péone – Valberg (SS4/7) at 13km and Val-de-Chalvagne – Entrevaux (SS5/8) at 17km.

With 6.7-seconds in hand to Sébastien Loeb heading into the first of the morning tests (SS3 Roure – Beuil at 18km) of this first full day of action, Ogier was the first of a number of crews to “have a moment” in the changeable conditions. On the last bend of the stage, Ogier kissed an armco barrier. His Toyota team-mate Elfyn Evans followed suit also having a slite brush with a barrier, but crucially the pair of Toyota drivers had gotten away with only minor bodywork scuffs.

For Hyundai, their troubled start to the Monte on the opening night appeared to see very little improvement heading into the morning stages. What was even more challenging for not just Hyundai but the entire field was that there was to be NO mid-day service on this first full day of competition in these new generation Rally 1 cars, just a tyre changing zone a the re-group.

Ott Tänak’s i20’s Hybrid systems wasn’t playing ball and Thierry Neuville who following a spin mid-stage painted a very bleak picture at the stop line of the first of the morning’s tests.

“Not better than yesterday, to be honest, it’s a nightmare. I have never been so scared while driving. There’s a lot of work left.” 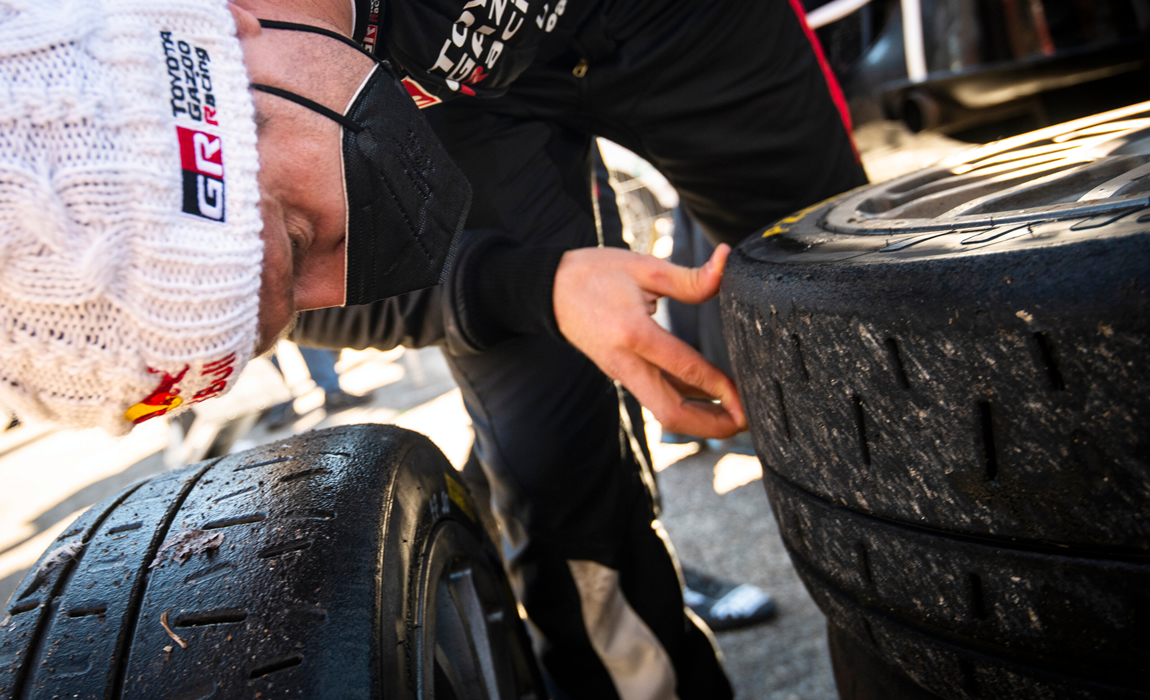 For M-Sport Ford, Stage 3 was a case of joy and pain, Leob set the quickest time (1.2-sec faster than Ogier) to record the Pumas first ever stage win but the joy in the M-Sport camp soon turned to pain when Adrien Fourmaux crashed out in a dramatic way.

The rising young French star carried too much speed into one section of the stage and made contact with the cliff face. The force of the impact was enough to catapult his Puma over, sending it rolling down the mountainside; although the crew were both ok, Fourmaux was visible upset in the aftermath of the crash.

Loeb scored his second stage win in the Guillaumes – Péone – Valberg test (SS4), this time getting the better of a slightly happier Ott Tänak, whose Hyundai i20’s Hybrid system was now appearing to be working for him.

Ogier headed into the final stage of the morning loop (SS5 Val-de-Chalvagne / Entrevaux 1) with a lead that had been reduced down to 2.8-seconds, but Loeb was on a charge.

Loeb emerged from the stage concluding his morning’s efforts with a hat-trick of stage wins to take the lead of the rally. It was a dominant performance proving that the 47-year-old French rallying veteran also known as THE GOAT (Greatest Of All Time) still had it within him at the sports highest level.

“I was pushing really hard all morning and the car is great. I have a very good feeling with this car, so I continue to push.”

For Ogier, a shocking time on that final stage of the loop had turned an advantage into a sizable deficit and caused him to slip down to third in the standings. Overtaken by his Toyota teammate, Elfyn Evans who was slowly getting to grips with his new GR Yaris; commenting “That’s more like it” at the stop line; Ogier was now some 13-seconds off the pace. 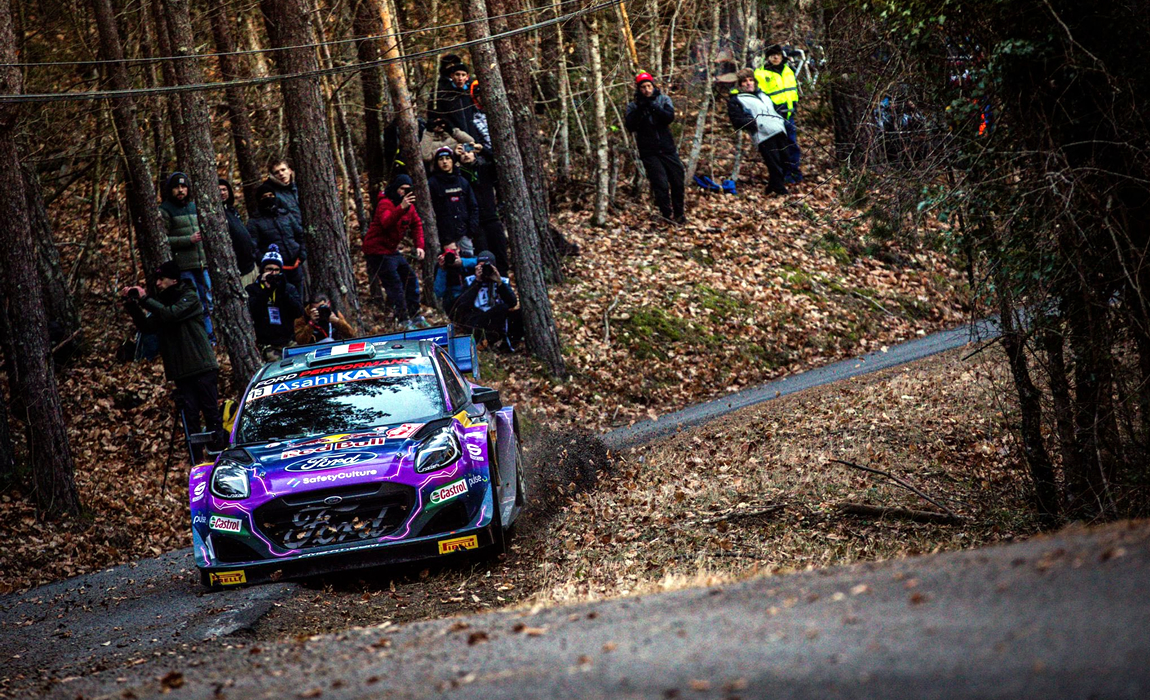 After a pause at the mid-day re-group and a fresh set of rubber on board, the repeated loop of stages faced the crews for their second attempt at the French asphalt.

Sébastien Loeb continued on where he left off, winning his 4th stage and gaining further time on second-placed man, Eflyn Evans. Although he believed that he had “The Perfect Stage” he knew that he could do no more, commenting that he was “on the limit” at the stop-line. An air of confidence had enabled him to push the Puma, something that we had not heard from the rest of the top WRC drivers so far in this edition of the Monte.

On the seventh stage, we may have seen a turning point in the career of Britains Gus Greensmith. The M-Sport Ford driver has had a torrid time at the top level of the sport in recent years, racking up his fair share of offs, which has been met with backlash from some fans of our sport.

But today in this new Rally1 Puma, on these Monte stages, something was clicking. Steady progress was made over the opening legs of the rally and his efforts were rewarded with his maiden stage win, beating eight times World Champ Ogier by 1.4 seconds. 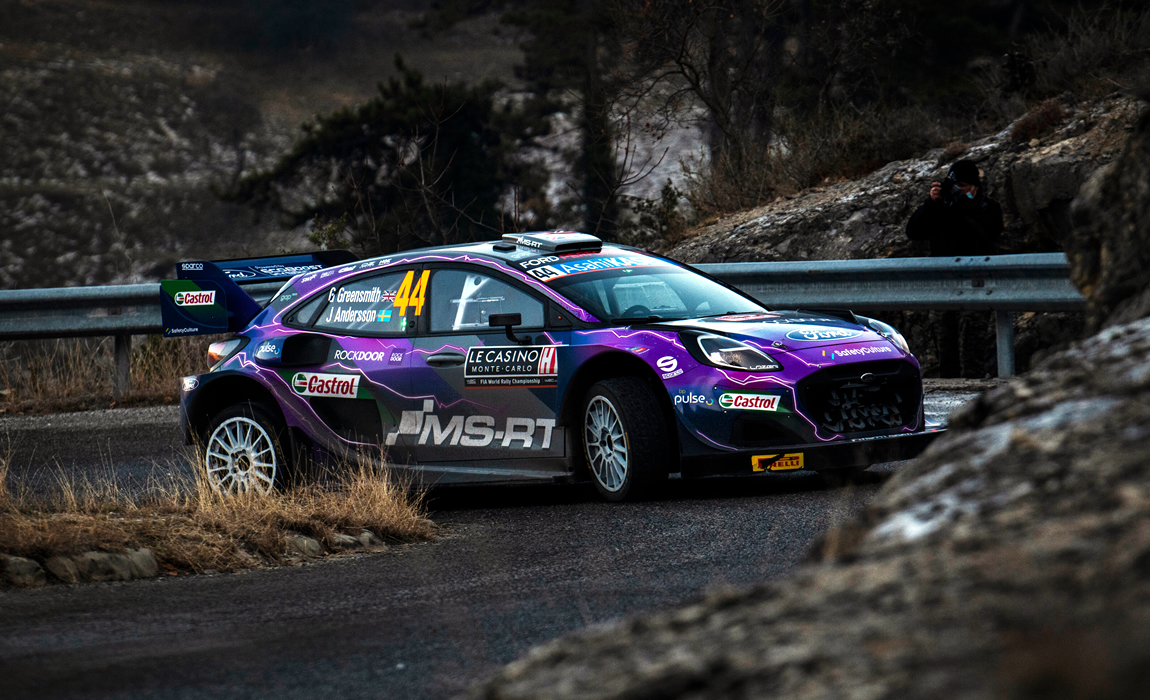 The final stage of the day was the repeat run through the Val-de-Chalvagne – Entrevaux stage, for which Ogier picked up his first stage win of the day. This along with his previous two 2nd fastest stage times on the previous two had enabled him to regain second overall from Evans, reducing the gap to Loeb in front down to 9.9 seconds.

“This morning we were a little bit on the safe side. This afternoon I pushed but we can not go much faster – we are missing some stability with the car and some traction. At the moment it’s not possible to go faster, but we can be happy with our afternoon loop.” 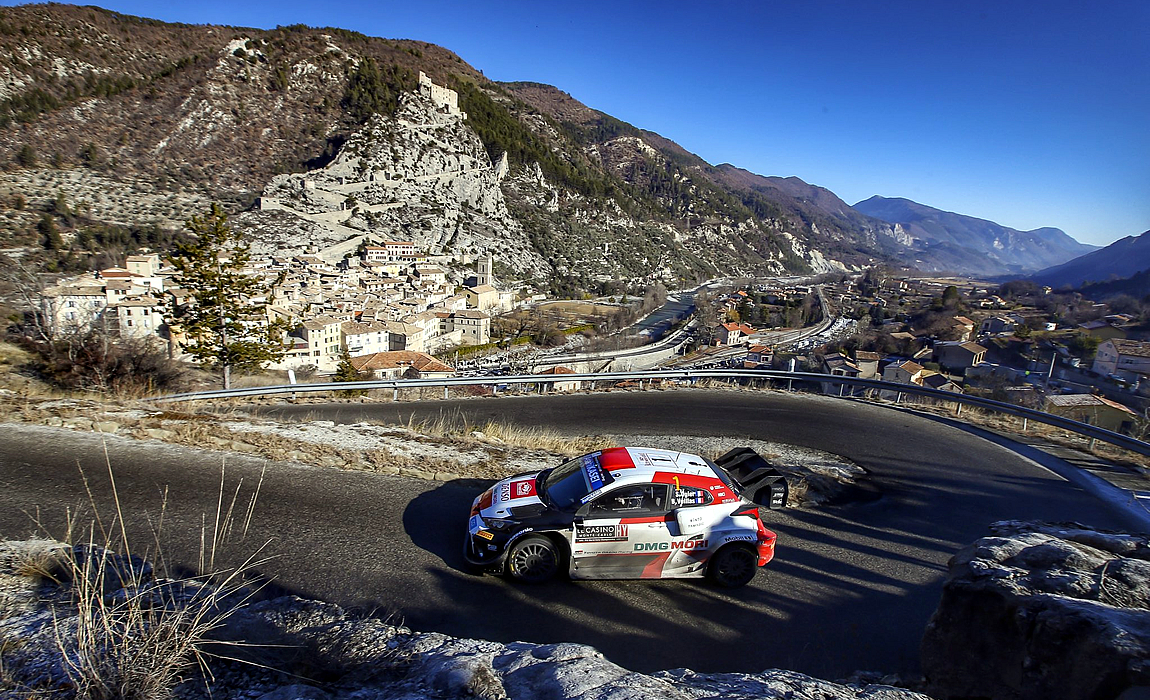 Over the course of the afternoon stages, Hyundais lead drivers Neuville and Tänak had both made steady progress, eeking out all they could from their i20 N Rally1 cars. Neuville ended the day in 4th overall ahead of team-mate Tänak but the team still had work ahead of them and were already thinking ahead to the next round.

“I think we are going to struggle to get there this weekend. I am on the limit of what we can do with what we have, but I am on the maximum now. There’s not much we can do, we have to fight for it.” 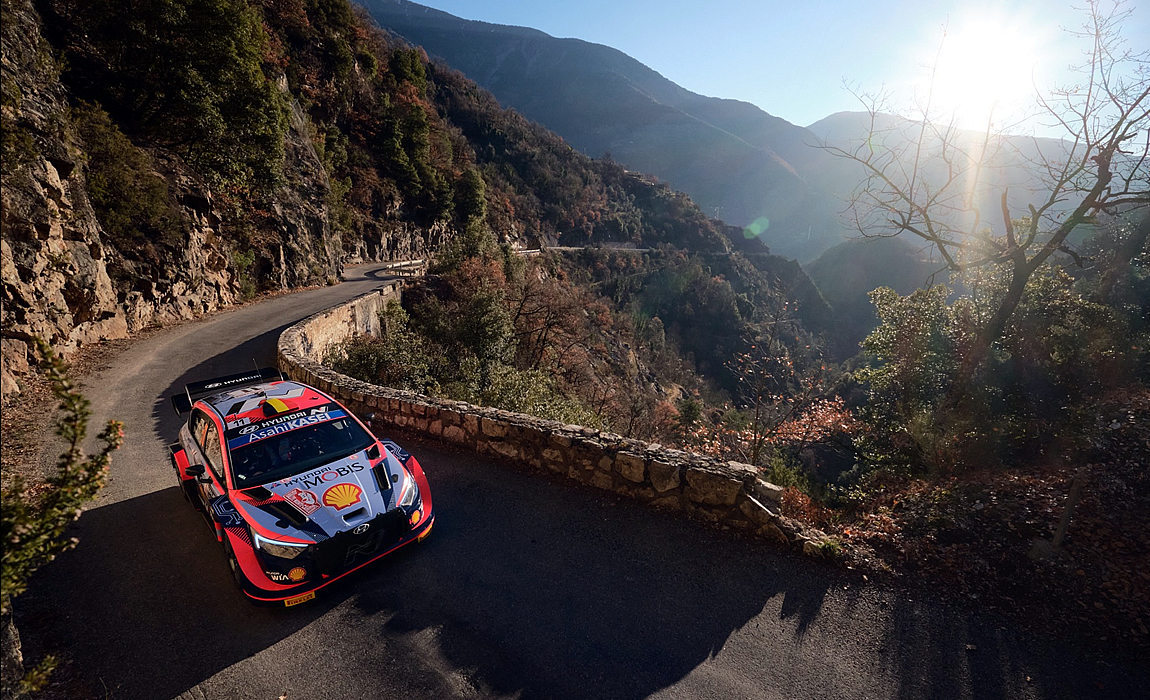 THE BATTLE TO BE THE MONTE MASTER 2022

When it comes to the infamous Rallye Monte Carlo, Ogier has one up on Loeb, with 8 victories to Loebs 7. Both of these greats of our sport would dearly love to add the 2022 edition to their career records but today, it was Loeb who was “The Monte Master”, ending the day with a lead of 9.9 seconds over his fellow countryman, Ogier.

“I was really surprised when I was doing the best time in the shakedown in the first pass because usually in the shakedown I am not great, but since that, we tried to push to get a feeling in the car. It’s not a big gap, but we are happy to be leading after the first day.” 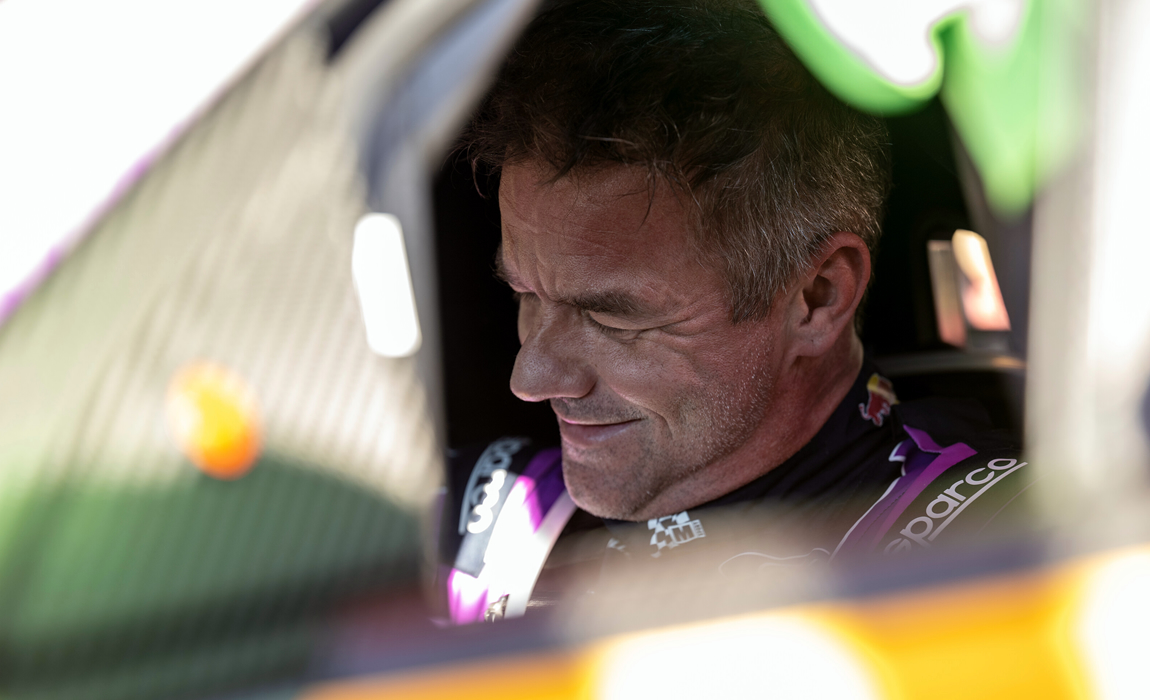 Overnight Rally2 leader Eric Camilli was just about holding on to his lead up until the final stage on the morning loop. Where an accident damaged the suspension to his Citroën C3 Rally 2 car, the Frenchman lost a chunk of time which dropped him down the order and out of contention.

Camille’s misfortunes placed the lead of the rally into the hands of Norwegian Andreas Mikkelsen who was locked in a battle with Stéphane Lefebvre. 2014 JWRC/WRC3 champ Lefebvre is tackling the Monte in a Citroën C3 and was trailing Mikkelsen by 3.9-seconds heading into the mid-day re-group and tyre-fitting zone.

“I think we did a good job. If you want to win this rally, then you have to drive fast in these conditions, so that comes with a little bit of a risk.” 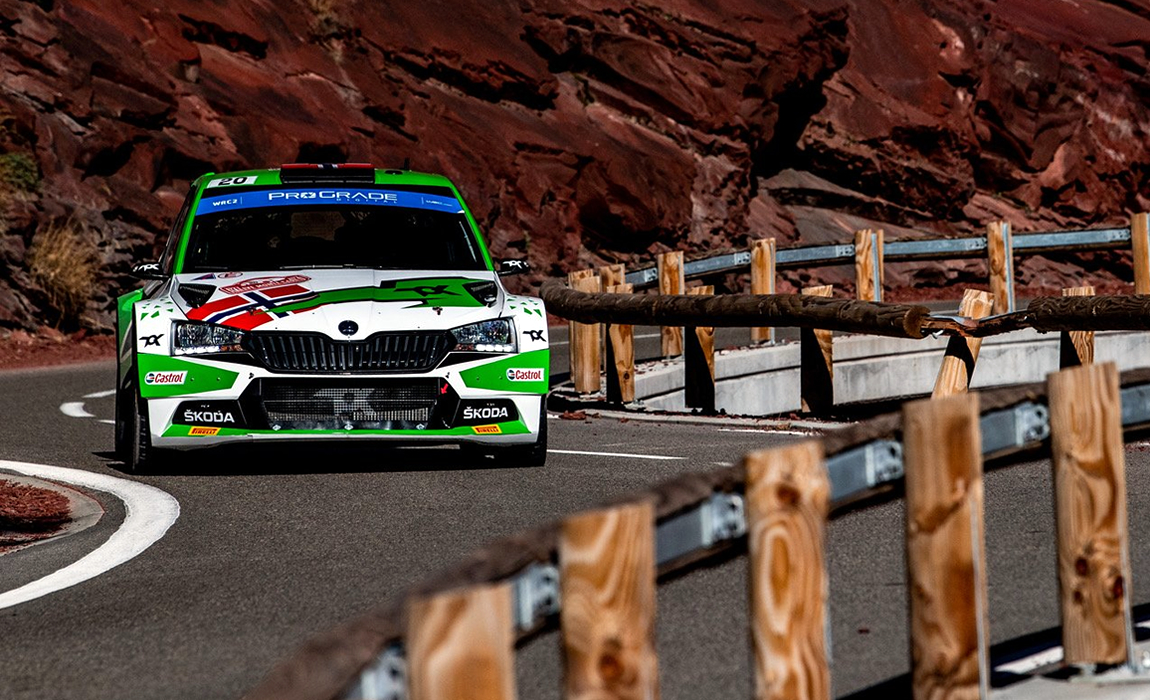 That battle between Mikkelsen and young gun Lefebvre raged on throughout the afternoon stages, until the final stage of the day for which Lefebvre won. This final stage push enabled the Frenchman to snatch the lead of the rally, ending the day with a 1.4 second lead over the more experienced Mikkelsen.

“I love these tricky conditions – they are like my home conditions. I took some risks and it’s good to finish like this. I am happy to finish the day with this rhythm.” 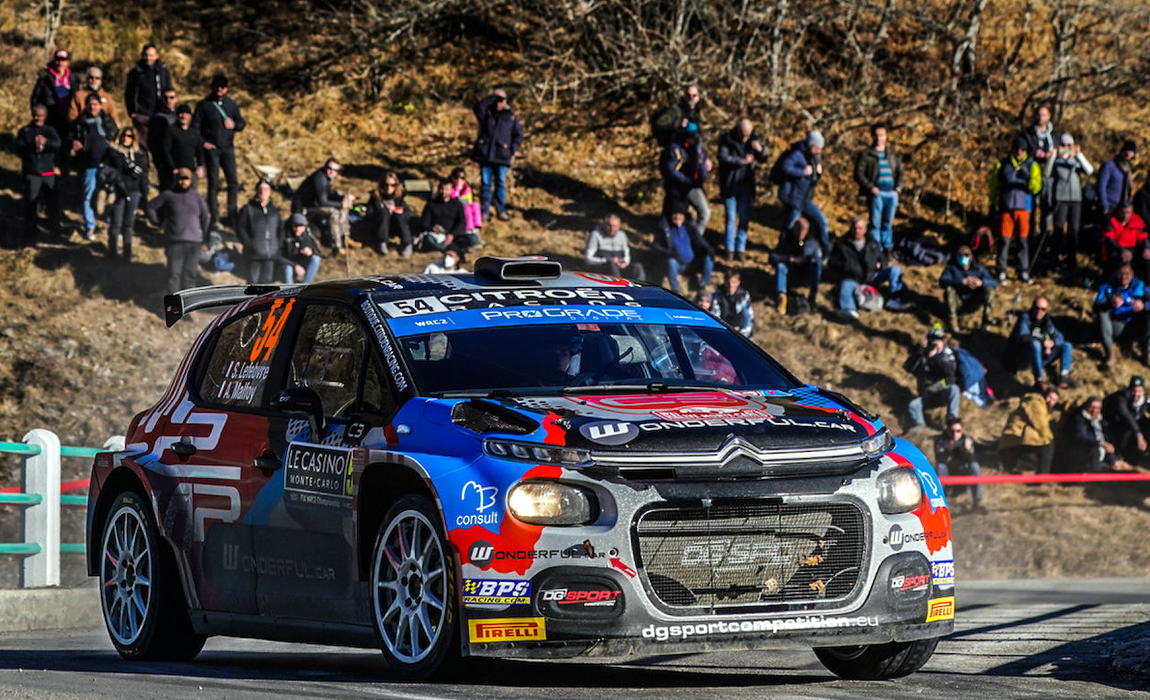 Behind the battle for the lead was another young Frenchman, Yohan Rossel (also in a Citroën C3) who had made the step up in class from his WRC3 title last year.

The young Frenchman was laying down some impressive stage times, and like Lefebvre was also mixing it up with Mikkelsen. With two-stage wins out of the 6 to his name, he had moved up the order to end his day 19.1-seconds off of the leading two drivers.

Elsewhere, after his unfortunate gear selection issue on the opening night which ultimately led to a time penalty and his huge time loss. Chris Ingrim in the third Tok Sport run Skoda Fabia was playing catchup.

The young Brit was using every kilometre of every stage to gain that much valuable experience. What better rally to do that on than one of the most challenging, The Monte? Ingram had ended the day in 10th in the WRC2 field, after consistently posting times inside the top 8 all day.