After more than 50 years of rallying moments, Rally Sweden bidded farewell to Värmland and headed North for the second round of the 2022 FIA World Rally Championships at its new home of Umeå. Since the start of the WRC back in 1973, Rally Sweden has been based in the Värmland region, however, in recent years, more specifically the 2020 event, the climate has changed in the region around February.

As the only winter event in the FIA World Rally Championship, winter is extremely central in Rally Sweden’s requirements. Therefore a more snow safe region further north was the basic requirement. Umeå’s strengths, in addition to that more stable winter climate, included good hotel capacity in combination with service park location and HQ at the Nolia trade fair area.

After a long challenging process for the organisers, the Worlds best rally drivers were now faced with a brand new winter rally challenge themselves. But Sweden this year was to be the first World Rally round since Wales Rally GB in 2006 without Loeb or Ogier competing. 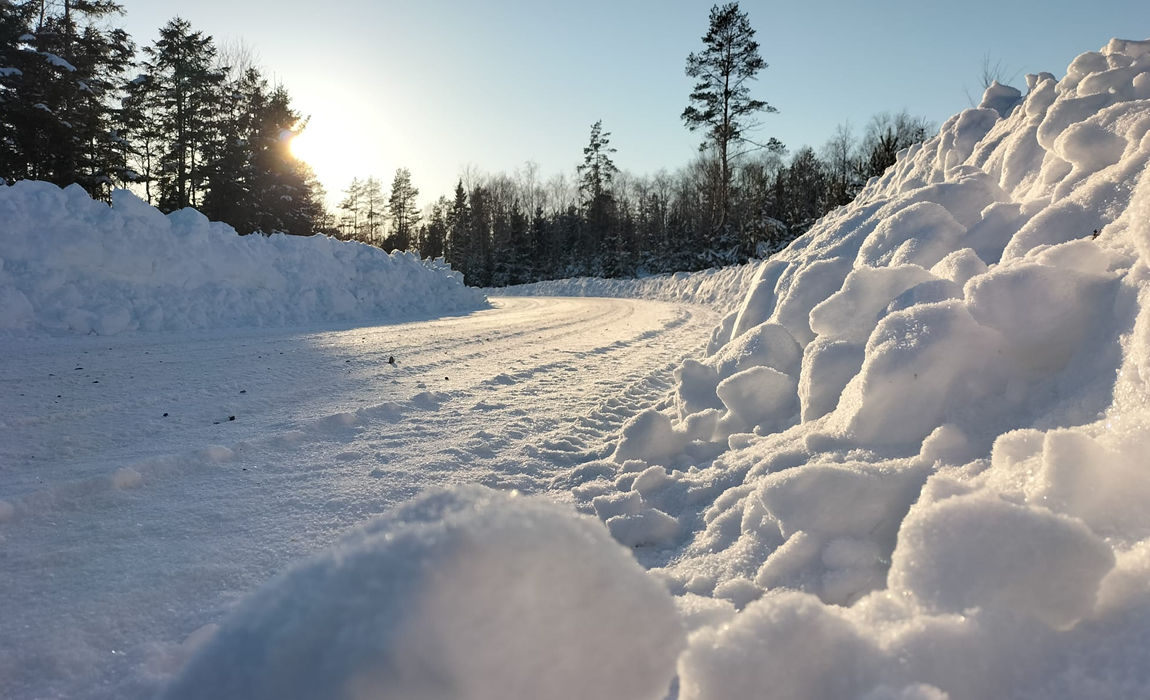 Finlands Kalle Rovanperä topped the pre rally Shakedown test at Klabböle on Thursday morning and would lead the crews away on Friday morning into the first 15km special stage Kroksjö. 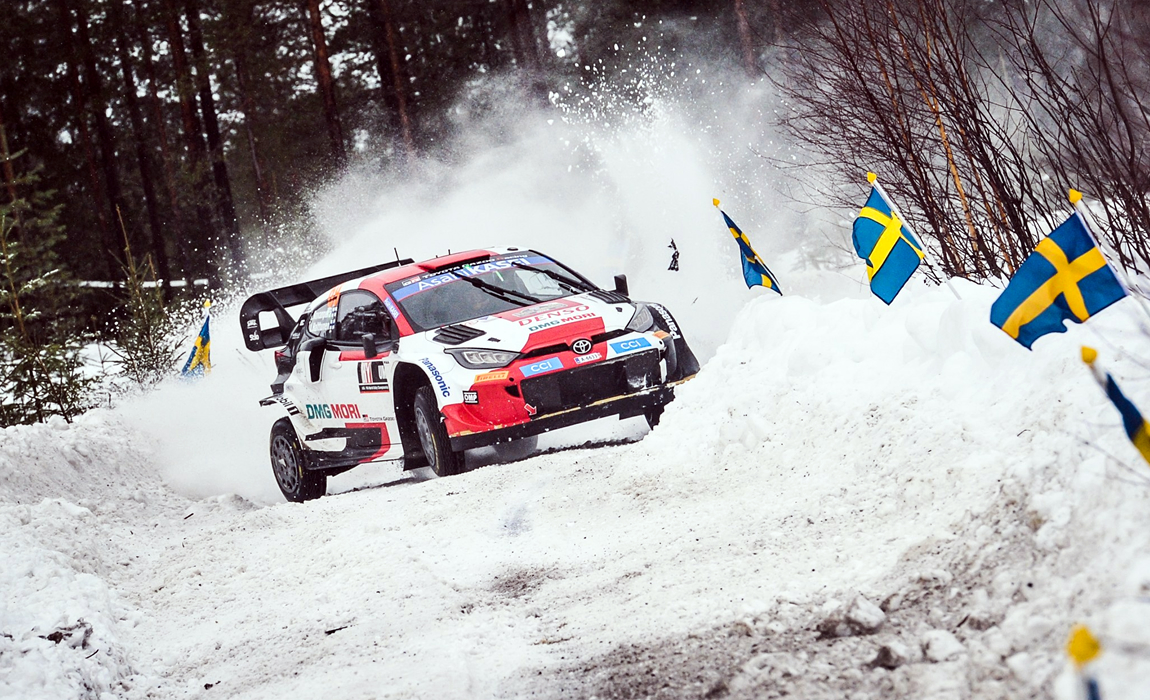 Playing the role of the snowplough, the young Finn who was representing Toyota Gazoo Racing in the Yaris GR would surprisingly post a very good time which could only be beaten by Hyundais Ott Tänak. Estonian Tänak who once again began his World Rally Campaign at the opening round in Monte Carlo with a DNF, was quickest out of the blocks at this new rally, gaining the opening stage win by just 0.4 seconds. 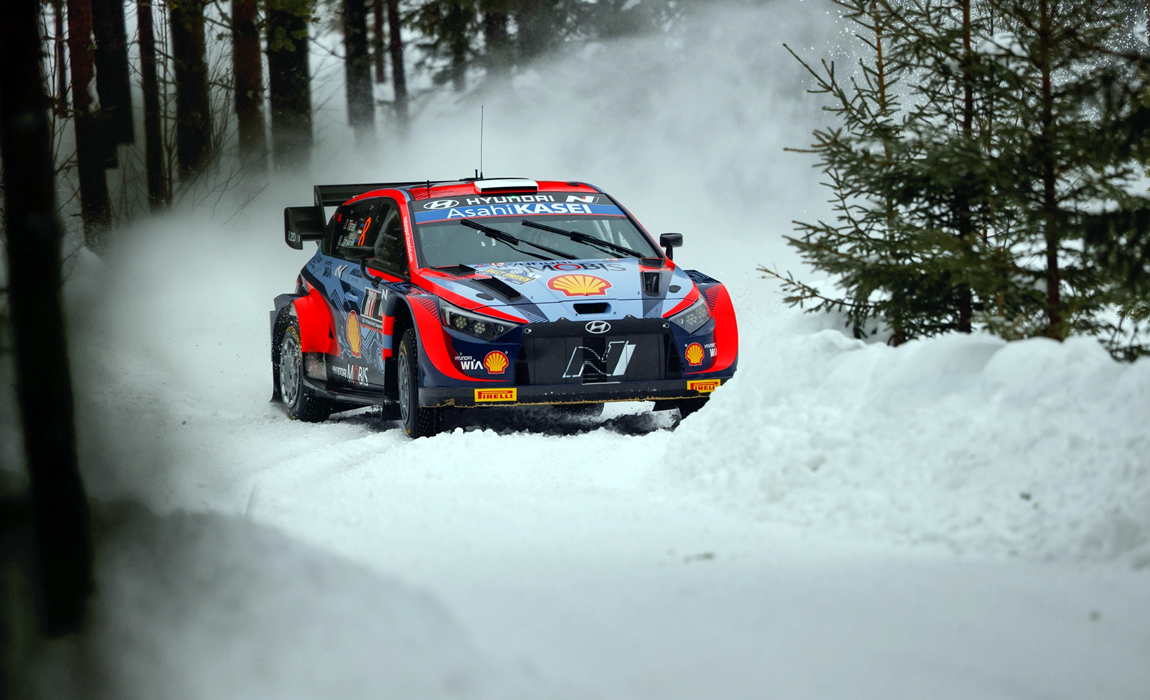 The second and longest stage of the rally (SS2 Kamsjön) at approx 28km was a stage with super-fast, flat out on the rev limiter sections. With an average speed of 131kph, It would bring early drama that would be centred around M-Sport Fords Craig Breen.

After only 4.7km into the test, he would be the first to have an altercation with a snowbank. This lost him around 30 seconds getting the Puma pointing in the right direction again, but Breen’s troubles wouldn’t end there. The Irishman would then have a second off at just over 20km in and would end up stuck deep into a snowbank which caused a red flag. In the commotion Co-Driver Paul Negal activated the FIA SOS Safty button, this would later result in the pair being slapped with a €2000 fine seeing as no medical assistance was required.

Thierry Neuville also had a minor issue on that initial snowbank after Breen had taken it out but the subsequent stage stoppage had perhaps been his saving grace. At the stop line the Belgian reported that his i20 was having technical issues: “the battery pack isn’t working” he reported.

The stage was restarted with Welshman Elfyn Evans who really wasn’t getting the feeling in Sweden, but for his Toyota team-mates Kalle Rovanperä and Esapekka Lappi, the story of the Swedish Rally had begun fairly well. 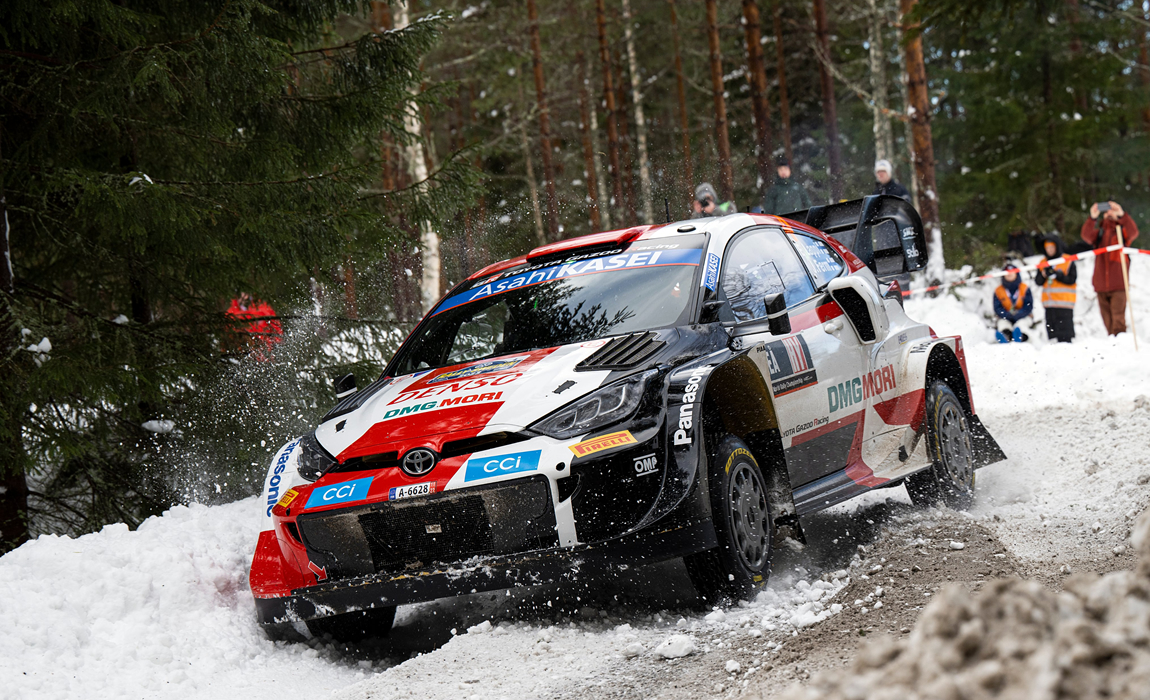 Ott Tänak was struggling with the balance to his i20 N and lost the lead of the rally to the returning Esapekka Lappi, whose stage winning time jumped him from 5th to 1st.

Thierry Neuville was lucky to make the final stage of the morning loop (Sävar) before the midday service: “We had some (Electrical) issues and we were lucky with the red flag, but I had to work very hard in between the stages to get the car going, I am really happy that we are here”. 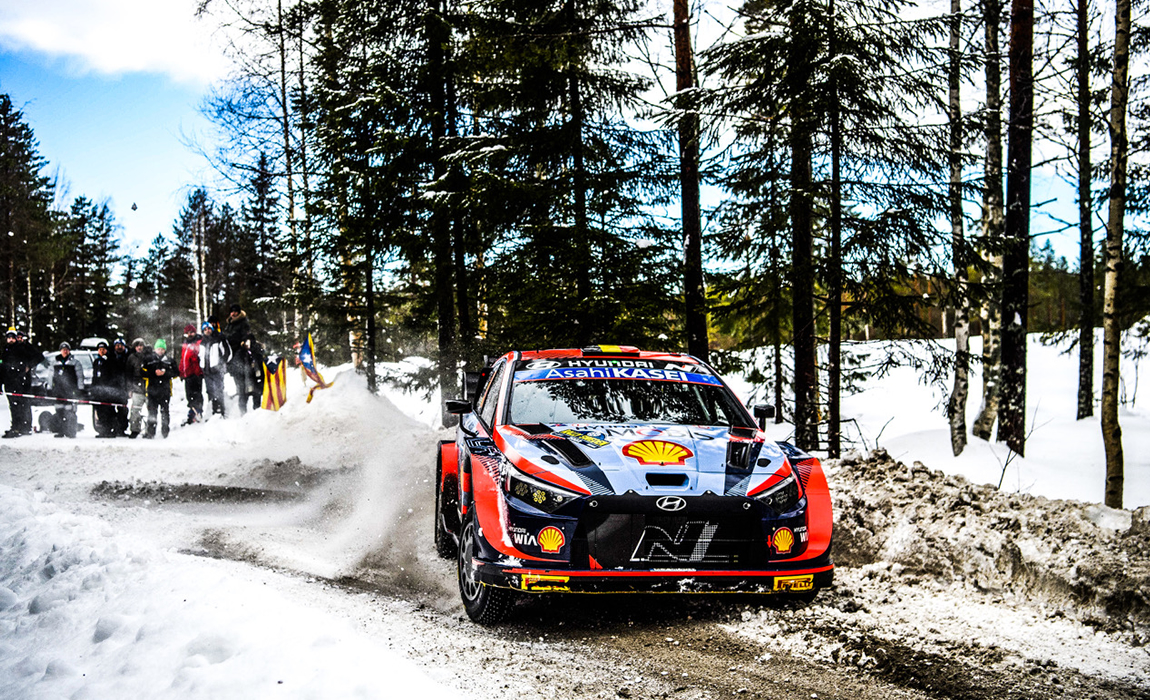 Elfyn Evans was constantly asking to have the notes repeated in the cockpit of the Yaris GR from Co-Driver Scott Martin. ” I don’t have great confidence in the car, to be honest, I’m struggling with the front end so it’s hard to commit.” However, everyone elses issues had promoted him up into third heading into the mid-day service.

Tänak arrived at the stop line with no front bumper, the damage was done on the previous stage but he was now feeling the effects of the lack of front aero. The morning loop had not been the best start in Sweden for Hyundai but at least they had a service to attend to any issues, unlike the opening day of the Monte Carlo Rally. The saving grace was that they had young Oliver Solberg up into second place.

There was once again a change in lead of the rally, Lappi stalled his Yaris GR on the start line and didn’t carry his speed from the previous stage which handed the lead back to his Toyota team-mate Rovanperä who ended the morning the loop with a 10.4 seconds advantage over Solberg. 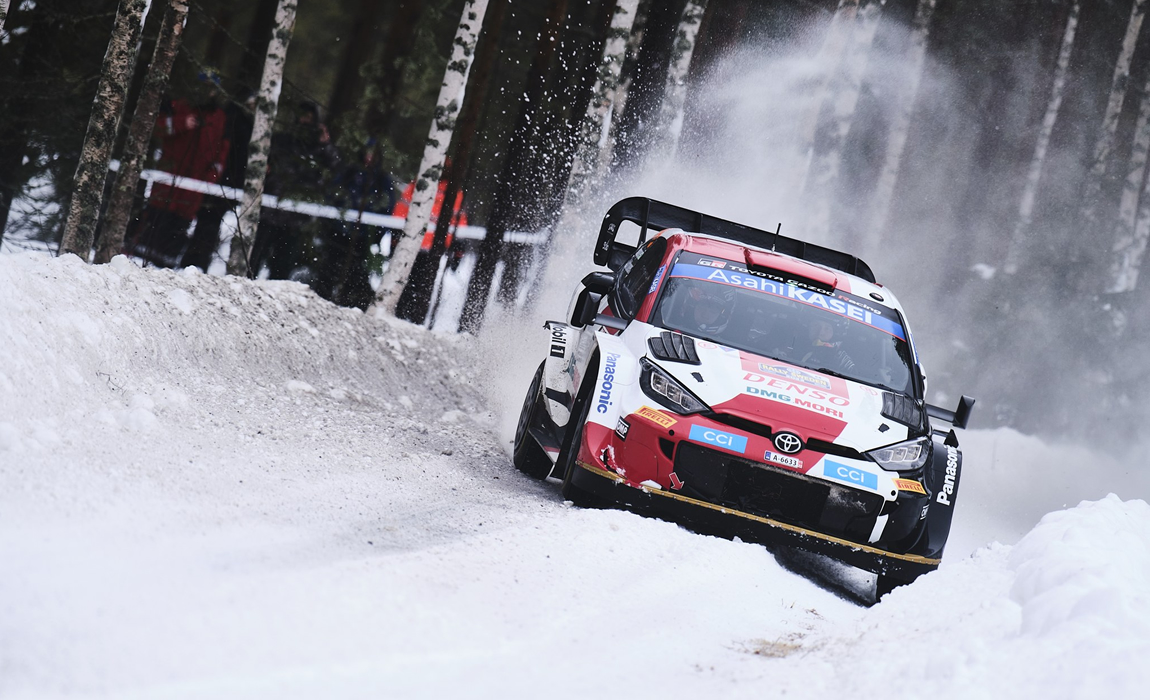 In the WRC2 class, the opening stage of the rally would see lighting pace from M-Sports’ recent signing Jari Huttunen. The young Finn who is peddling the M-Sport Ford Fiesta R5 car delivered a big stage time that blew the likes of reigning Champ Andreas Mikkelsen out of the water. His time was so impressive that it was actually faster than a handful of World Rally1 cars.

Norway’s Ole Christian Veiby would take the lead of the class on the second stage, gaining his first fastest stage time and leading Nickolay Gryazin by 8.3 secs. A lead for which Veiby in the VW Polo GTI R5 car would extend further in the final stage of the loop, to end the morning 11.8 sec in front of Estonian Georg Linnamäe. 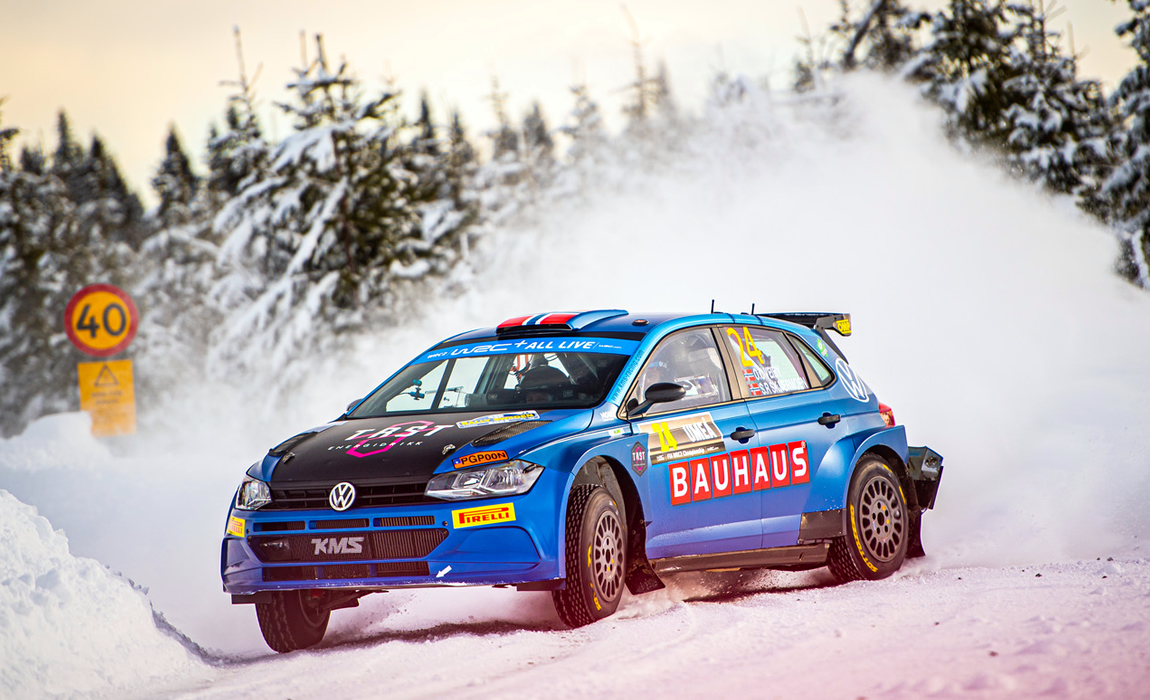 Meanwhile, in the Rally3 class, Sweden was the opening round of the 2022 FIA Junior World Rally Championships. The opening stage kicked off a fierce battle with Finlands Sami Pajari and Estonian Robert Virves both stopping the clocks on the exact same time. Unfortunately, Virves was to lose out on the very next stage after getting stuck in a snowbank leaving Pajari to take the lead of the class. 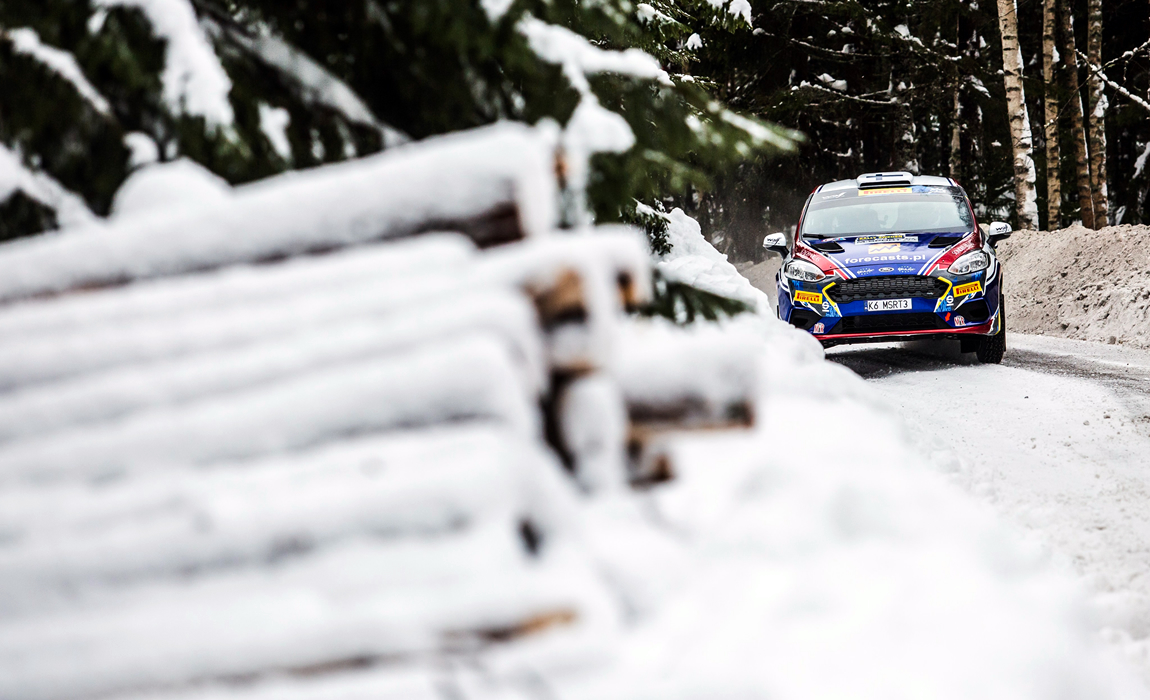 However, Pajari’s lead was ended on the final stage of the morning loop, with technical troubles to his Rally3 Fiesta he was forced to retire for the day. Pajari’s exit left behind a battle between Lauri Joona and Britains Jon Armstrong, with Joona leading Armstrong by 5.4 seconds and Irishman Will Craighton in third heading into the midday service halt. 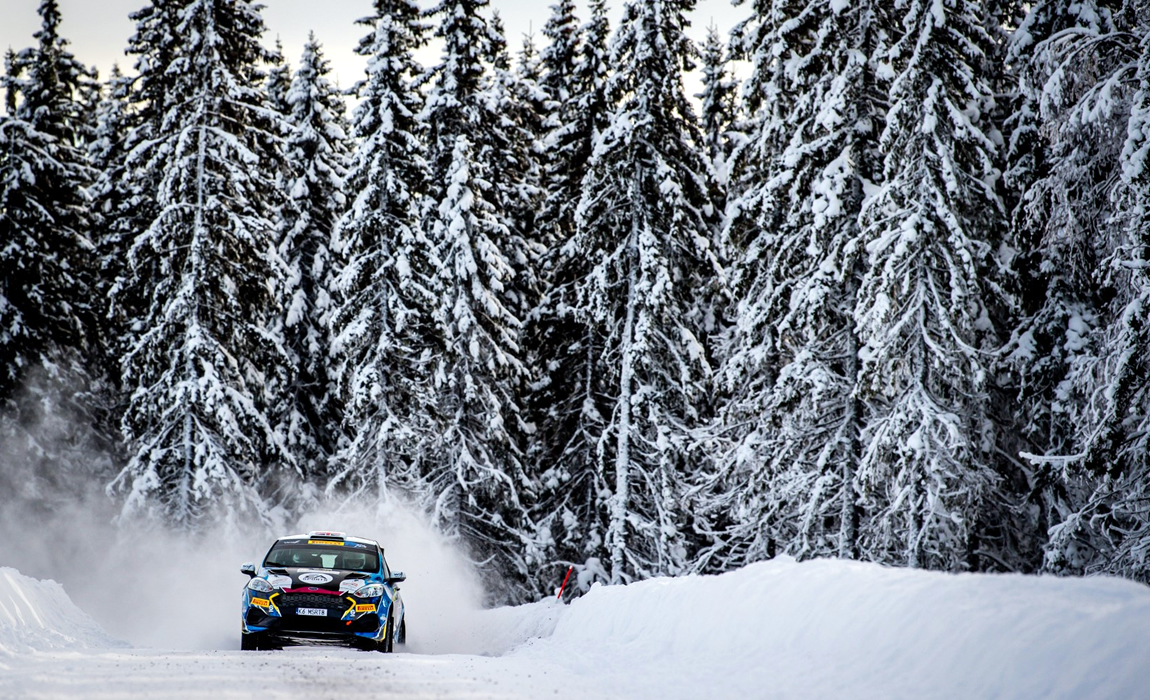 Back out after the mid-day service halt and the conditions out on the stages had changed considerably. Rally Sweden also runs a National Historic Rally alongside the main World Rally event and the extra ware and tare from those machines had made for challenging conditions.

First man on the road Kalle Rovanperä was first to experience those repeated stage conditions and had “No lines to follow” through the second run over the Kroksjö test. The young Finn found it very difficult in his Yaris GR, but the drivers behind him would also appear to have the same complaints.

Thierry Neuville said “The road is destroyed, no lines and the car is going everywhere”, his Hyundai teammate thought it was difficult to manage the tyres but their more Junior teammate Oliver Solberg was able to maintain his second place overall, despite a couple of small mistakes.

Eflyn Evans didn’t seem to be exactly having the time of his life, “It so difficult in there, it’s so messy, it didn’t feel that great for us” but his stage time was good, the Welshman had picked up his first stage win but more importantly, he had taken over the lead of the rally. 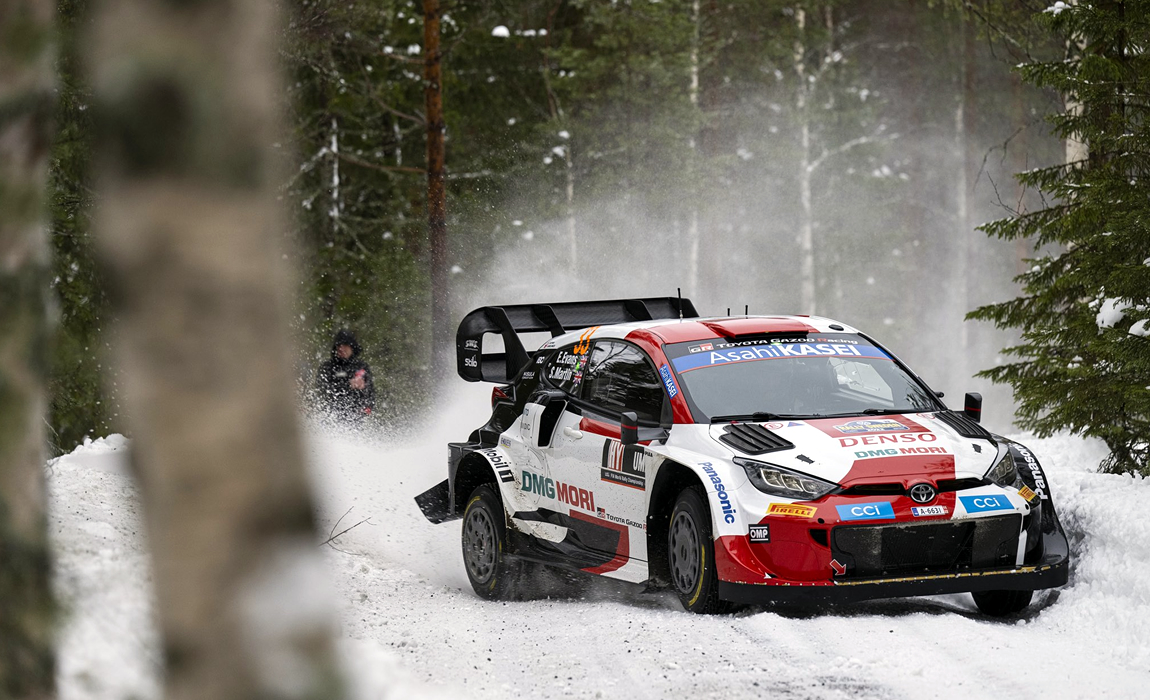 The second pass over the Kamsjön test was very much the same story, the difficult stage conditions continued to hamper the first couple of competitors. Rovanperä who would have grown up driving similar stages back home in Finland thought it was “One of the most difficult conditions when I’ve been driving” and said he was just trying to survive.

Neuville drove with caution which was a similar story for rally leader Evans. Ott Tänak although had set a good time, reported that he lost Hybrid some 10k before the end of the stage following a big compression, but nevertheless it was his second stage win.

As dusk fell the temperature dropped for the second pass over the Sävar test and it was time to strap those ultra-bright LED lamp pods on for a high-speed blast in the low light.

Wide-eyed Neuville was fully focused on the road ahead and he needed to be, as he flung his Hyundai i20 kissing the snowbanks on his way to picking up his first stage win. He had a good feeling and his car was working well which was more than could be said for his team-mate, Tänak who would not start the stage. A fault with the Hybrid system triggered the RED light on Tänaks i20 which forbids him from continuing on.

Neuville had climbed up into second place and was within touching distance of the lead. He found himself just 0.6 seconds behind Evans heading into the final Umeå Sprint of the day. 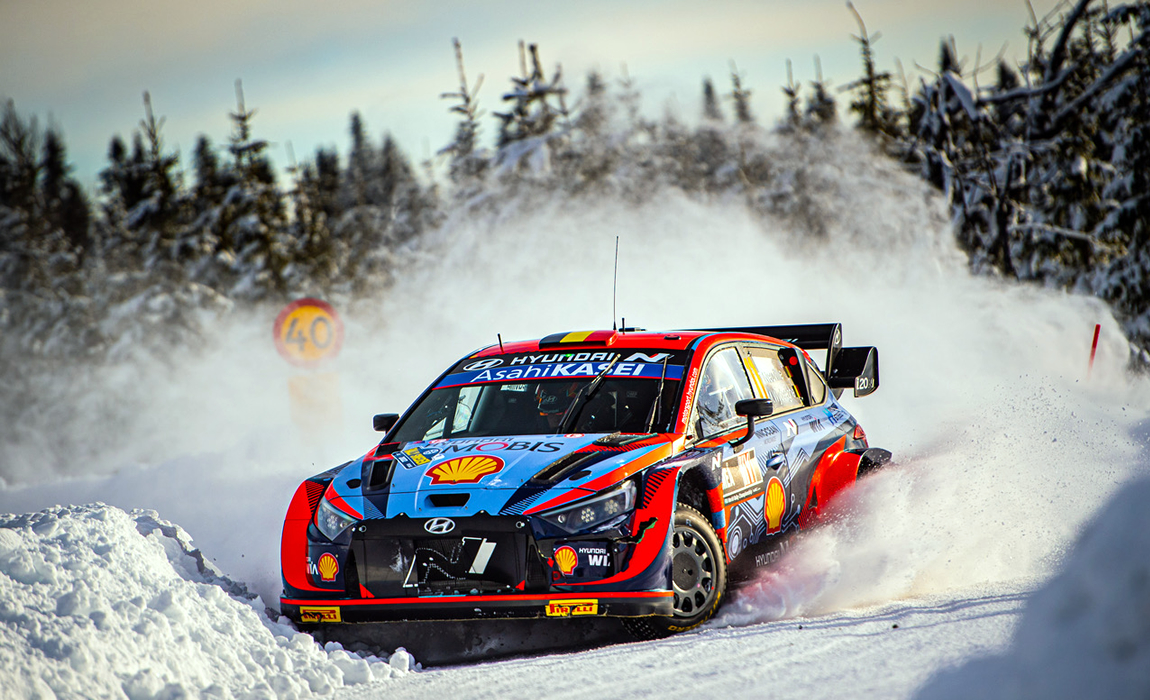 In front of a packed crowd of The Swedish Rallying Mafia, Thierry Neuville took the lead of the rally after posting the second fastest stage time behind Kalle Rovanperä.

Belgian Neuville had ended the opening day of this new look Swedish Rally in his Hyundai i20N with a 4.3 seconds advantage over the Toyota Yaris GR of Rovanperä with Elfan Evans dropping down to third just ahead of Esapekka Lappi.

We had a very cleaver afternoon where we managed our tyres very well. I have to say the car was working perfectly, we made some small setup changes in the services but very few changes only and I felt comfortable so I was able to drive fast. I think it worked pretty well.

Ole Christine Veiby came back out of service strong by winning the first of the repeated stages, Kroksjö but his fellow countryman, Andreas Mikkelsen was on a charge in his Tok Sport run Skoda Fabia Rally2 EVO. By winning the second pass over the longer Kamjön test Mikkelsen was closing the gap down to Veiby. 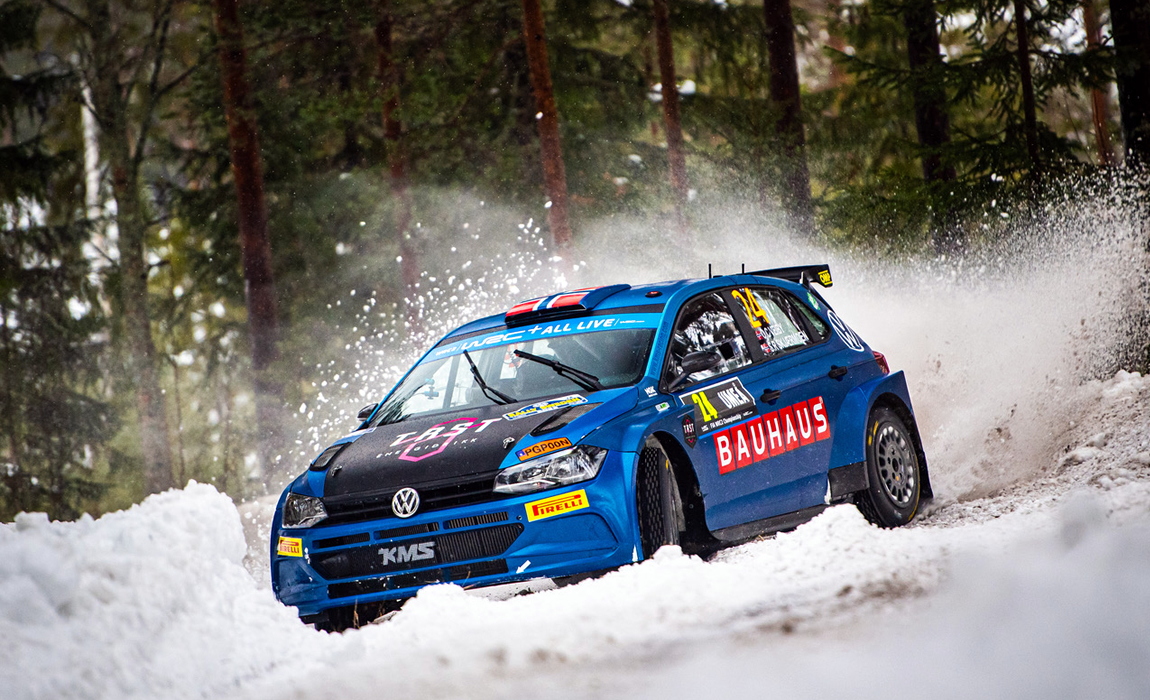 Although Mikkelsen continued to keep the pressure on, Veiby was holding the surging WRC2 Champ off until the final stage of the day that was.

In the final Umeå Sprint, it would all come undone for Veiby, stalling his VW Polo GTI R5 in a junction. He couldn’t get the car restarted again and the time loss incurred had resulted in the loss of the lead of the rally.

I was sitting there for so long. It was such a good day and it’s a big shame that this happened here. At least now he can clean the road for us tomorrow!

Andreas Mikkelsen would end the day with a surprise 4.1-second lead heading into the second full day of action.

For Britains Jon Amstrong, alongside Co-Driver Brian Hoy the afternoon’s objective was to chase down a Fast Finn. Just before the mid-day service halt, Amstrong had netted his first stage win and came out after service fighting, grabbing his second fastest stage time to close the gap down to Lauri Joona to a slender 0.2 seconds. 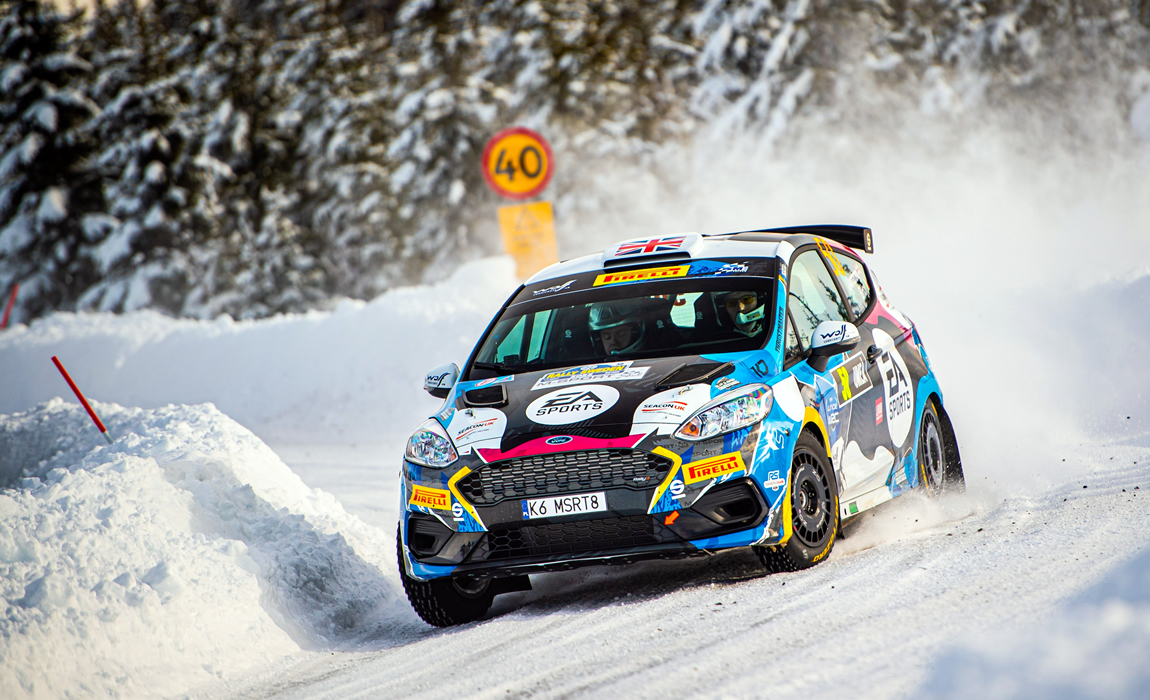 Joona reacted to Armstrong in the very next stage, the longer Kamsjön test and followed up that stage win with another over the repeated run of the Sävar tests.

Whatever Amstrong threw at the Finn, it wasn’t enough as he seemingly pulled out a further lead of 7.5 seconds heading into the final Umeå Sprint stage of the day. Behind the battle for the lead, Irishman Will Creighton was plodding along and managed to pick up that final stage win of the day, but he was some 36.7 seconds off the pace.

We’ve had a solid day’s running at Rally Sweden, with a few stage wins already secured.