Over the history of the World Rally Championships, whenever The Swedish has followed The Monte, the driver leading the Championships heading into the Winter Rally would be the first car on the road. More often than not, they would rarely have an outside chance of fighting for victory on the snow and ice. Finlands Kalle Rovanperä would buck that trend this year, beginning the final day with a decent buffer to defend over the final four stages of the rally.

The final day of the rally delivered drama by the bucket loads, both before the action out on the stages had even begun and before the end of that first 14km Vindeln test. Overnight, Welshman Elfyn Evans was slapped with a 10-seconds penalty following his incident on the final bend of the Umeå test on Saturday evening. The wording from the Stewards stated, “The crew did not follow the roadway on SS15 – Umeå at box 28 in Road Book2”. 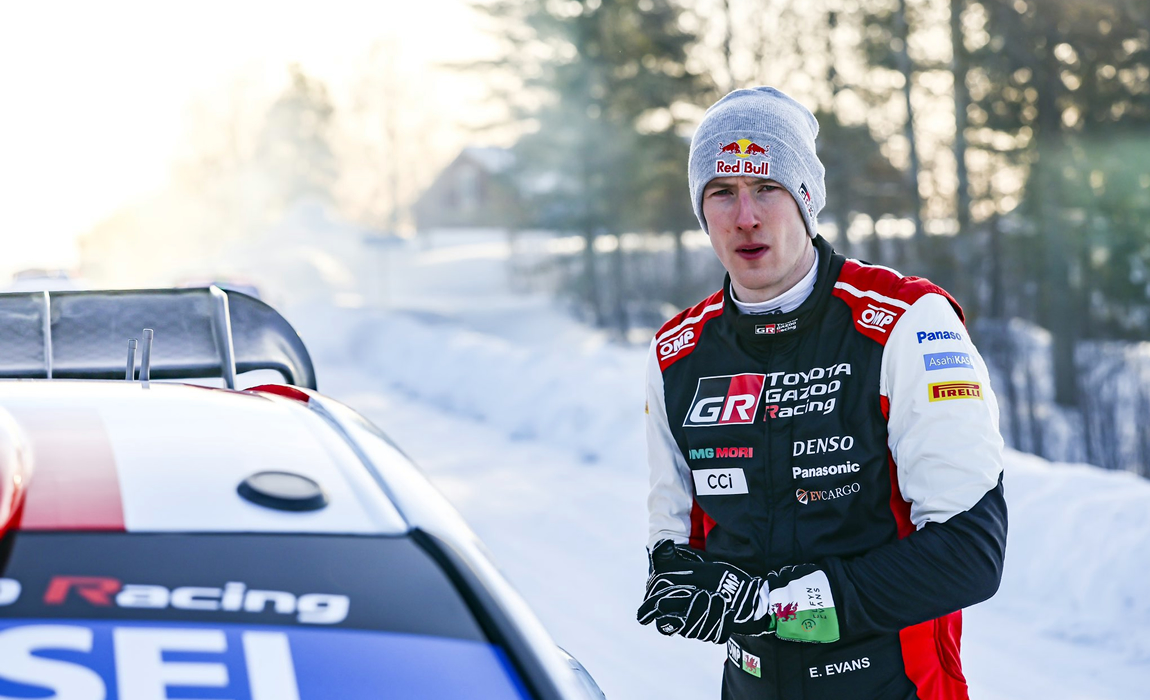 The result of that would drop Evans even further behind his Toyota Gazoo Racing teammate and Rally leader, Kalle Rovanperä by 18.3 seconds heading in the final day. Many will have the opinion that it was a very harsh handout from the stewards and Evans was not impressed with the decision in the slightest. Thierry Neuville however thought that the penalty that was imposed should have been even more, well, of course, he would, wouldn’t he? At least Evans had retained second place over Neuville, well sure he did, but that didn’t last long.

M-Sport Fords rally took another blow before the final day of action had begun; Andrian Fourmaux retiring his Puma on the road section to SS16. Problems from the previous day could not be rectified overnight so it was a non-starter for the young Frenchman. This coupled with Breens off on the opening day made for a very disappointing rally, leaving just Britain Gus Greensmith on the board to score some points. The highs of the Monte had immediately been followed by a low in Sweden.

For Toyota, the final day began with technical issues on their lead cars of Rovanperä and Evans. Entering the opening stage of the day with their Hybrid system was not working and showing a flat battery, which meant no added boost. However the morning went from bad to worse for Evans, an altercation with a snowbank caused some significant damage to his Yaris GR. Having to retire from the rally or any rally to that matter on the final day action was a disastrous end to his Swedish Rally and does nothing for his Championship this early on in the season. 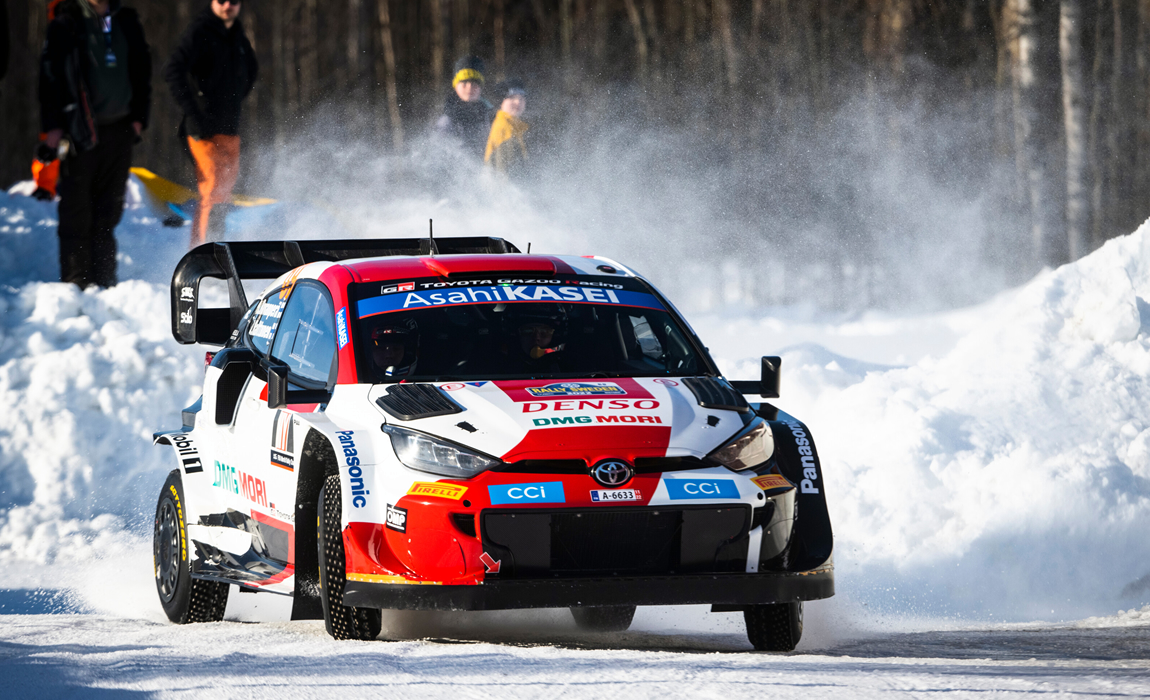 Remarkably, without the Hybrid boost, Rovanperä posted the fastest time on the opening Vineln test, beating Neuville by 2.2 sec; but Evans’s exit had promoted Neuville into second. At least Toyota still had Lappi behind, now moving into the final podium place.

Craig Breen was first to check the Sarsjöliden stage ahead of the final power stage, saying “it was one of the nicest stages of the weekend”. With no spare tyre, the Irishman was clearly eyeing up the Power Stage points in an effort to salvage something from his rally. The same went for Ott Tänak in the Hyundai i20 N, a stage win here was perhaps an indication of his intent for the re-run. 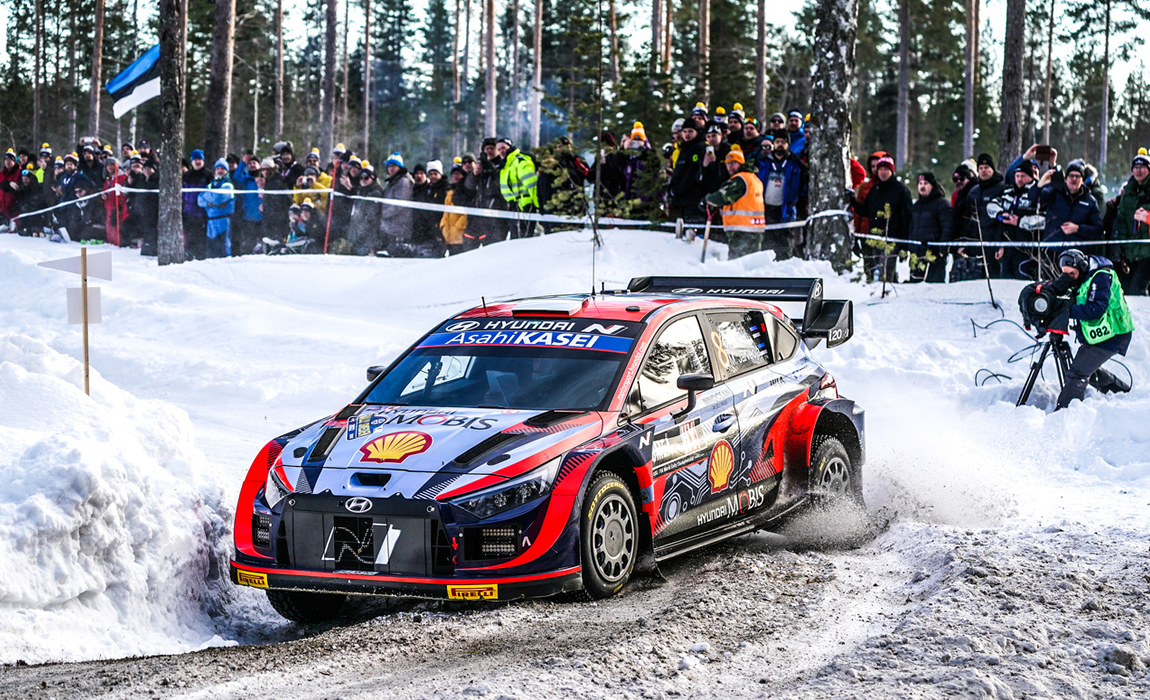 Mikkelsen was going really hard through the second test of the morning, Sarsjöliden, “there’s not so much more we can do without taking crazy risks” the Norwegian commented at the stop line. The challenger, Vieby was going for it too but he was willing to take some risks. That little bit of extra risk-taking had earned him another stage win, almost halving the gap down to 4.8 seconds. 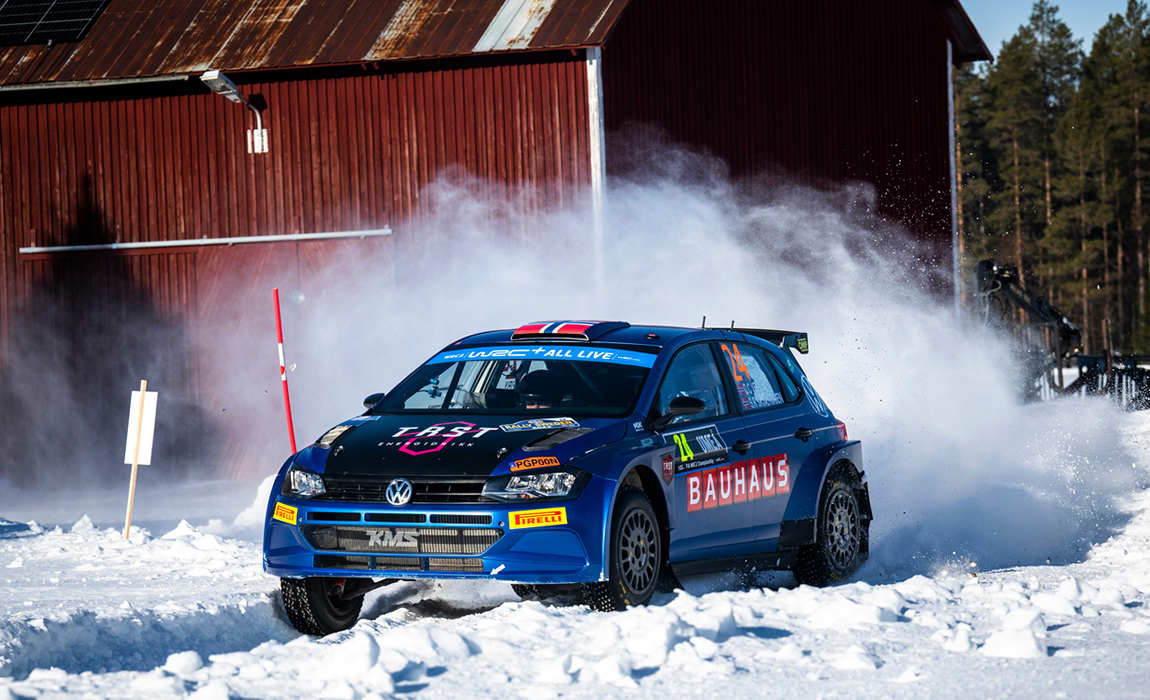 Britains Jon Armstrong was leading the Juniors heading into the final day of competition. Earning the lead of the rally on the final Umeå test on Saturday evening, a 3.5-second lead was all he had in his pocket. Finlands Lauri Joona behind would chase him down in what would be a tug of war battle for the opening round victory in the Juniors. 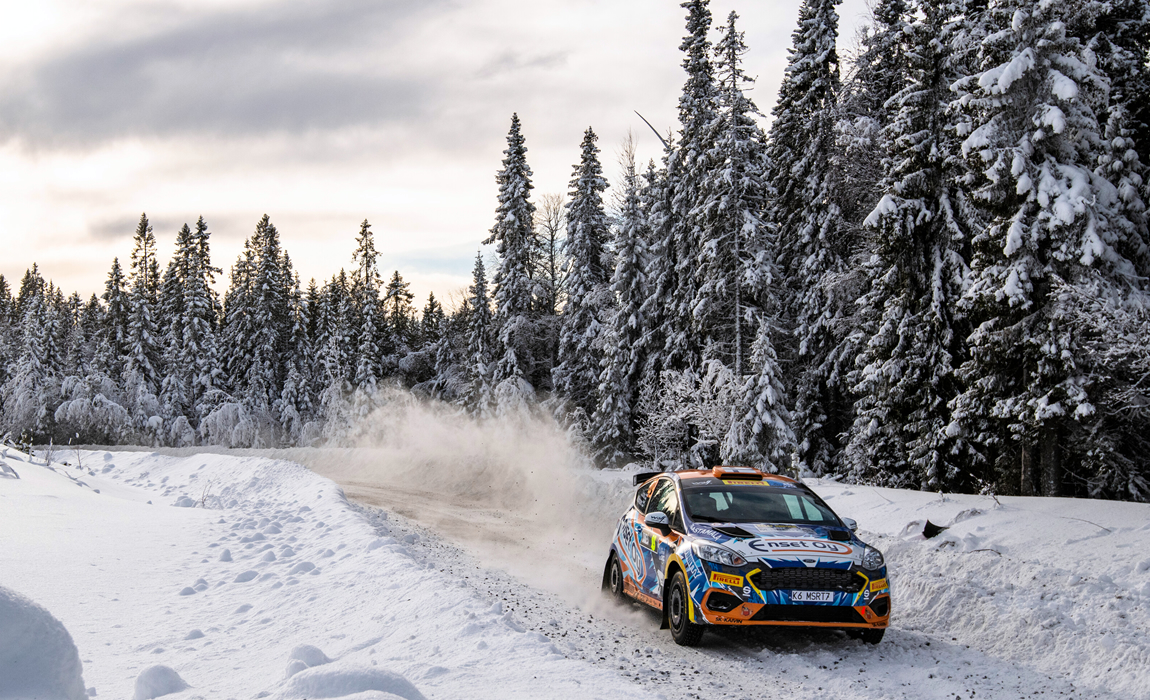 The flying Finn didn’t take long to overhaul the Ulsterman, taking back the lead of the rally on the morning’s opener; by winning the Vindeln test he was just 0.5 in front of Armstrong. But hang about, Armstrong was not about to give up the rally and came back at Joona winning the Sarsjöliden test snatching the lead right back.

The penultimate test of the rally, the Vindeln stage was the fastest of the rally with a high average speed on the first pass. However, for the majority, the name of the game was tyre saving for the power stage; thus the second run was all a little bit disappointing. Both Breen and Tänak coasted through the stage, setting the precedents for a Sunday morning cruise for which this trend followed for the remaining crews who weren’t in the fight at the sharp end.

All that stood in the way of Finlands Kalle Rovanperä and victory was the small matter of the Power Stage. From first on the road on the opening day, he had defied the odds heading into the final 15km of Sarsjöliden with a comfortable buffer of some 21.6 seconds ahead of Thierry Neuville.

Naturally, the rest of the field would be gunning for those power stage points but he just had to make it through to claim his third-ever World Rally win. Ott Tänak had the speed but not the luck on his side in Sweden, he ended the rally with a final power stage win to pick up those 5 bonus points.

M-Sport Fords Gus Greensmith was the only points scorer from the team, finishing in 5th place he didn’t exactly set the world on fire in Sweden. But it was a finish and a better one than his teammates Craig Breen and Adrian Fourmaux.

Toyotas’ disappointment came in Elfyn Evan’s retirement on that opening stage of the final morning. After being locked in the fight for the rally win with his team-mate throughout the event; being handed that somewhat harsh penalty was perhaps where it would all fall apart for the Welshman. His exit from 2nd place could well hurt his Championship fight this season, only time will tell.

However, Toyotas Swedish Rally was not all “doom n gloom”, putting Evans aside it was actually a pretty good result for the team. Their other full-time driver Takamoto Katsuta had delivered a strong 4th place performance; showing some great pace on the snow and ice. 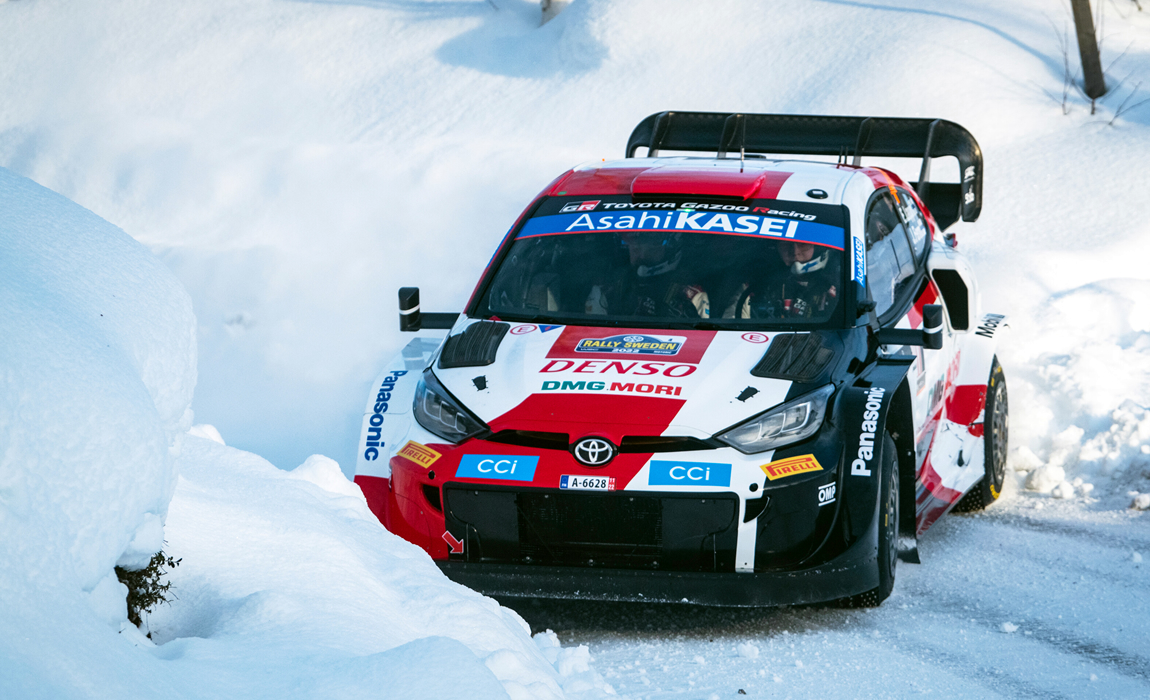 Astonishingly after more than 12 months’ absence from the WRC, Finlands Esapekka Lappi had made an impressive return to the top flight of rallying in Sweden. Mixing it up at the top, the part-time Toyota driver was very much on the pace. His third place on the podium has perhaps left the Toyota Gazoo Racing boss, Jari-Matti Latvala with a bit of a dilemma for the rest of the season.

It means a lot at the moment. It was too much risk to push and fight against Thierry but this was the target and we got it.

For Hyundai, Theirry Neuville had somewhat rescued their Swedish winter wonderland adventure. After their disastrous start to the season in Monte Carlo and with a lot of work to do, they perhaps had low expectations for Sweden.

Ott Tänaks retirement at the end of the second day was lining things up in very much the same way as The Monte. But Neuville, perhaps the best motivational speaker in rallying kept plodding on and was rewarded with second place following Elfyn Evans’s exit on the final morning of the rally. This result of 2nd on the podium was very welcomed for both the Belgian Neuville and the team. 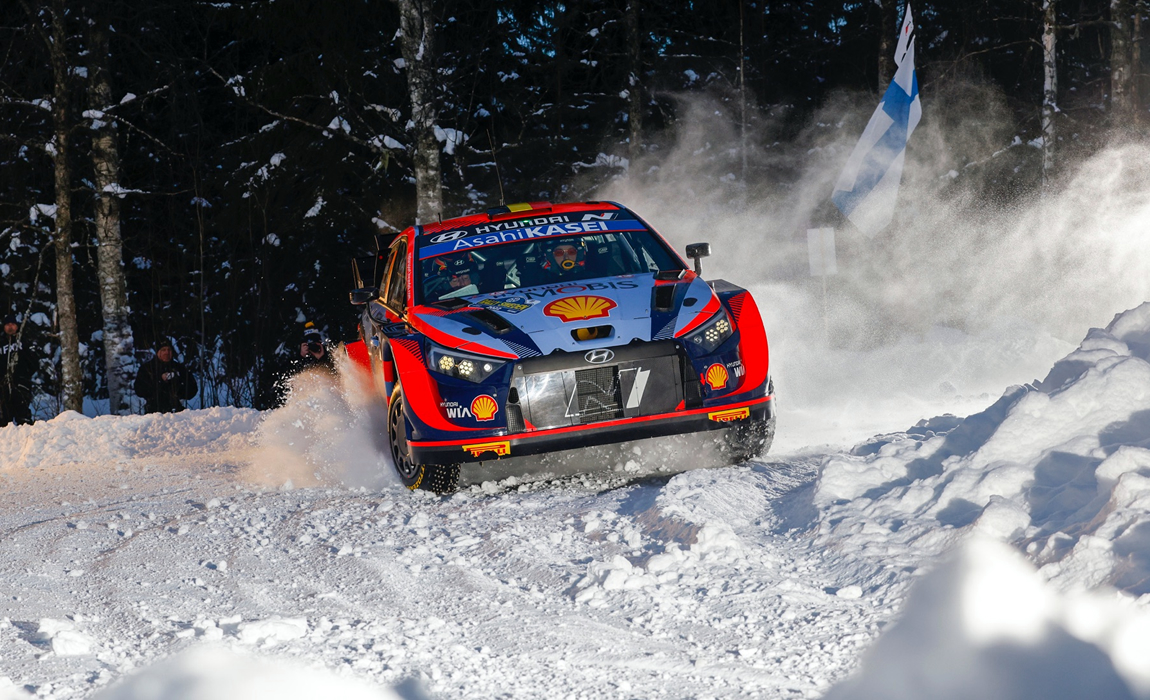 It should be quite normal to be honest. After Monte Carlo we had a lot of work to do and everybody worked really hard despite some difficault times. We are here and we are showing that we are going the right way. There’s still some work left but I’m looking forward to the up coming events.

Against all odds, Toyotas Kalle Rovanperä had done it, he had won The Swedish. Leading the Championship heading into the second round meant that he would be in the unfavourable position of being the first car into the stages on Friday. The young Finn entered the final power stage and emerged victorious in a performance that puts him right up there and in contention for the title this season.

I am really pleased, I didn’t think that we could be this good, especially after starting first on Friday. It was quite a big job but I am really happy.

The pressure on Veiby to catch Mikkelsen was too much, as they reached the penultimate stage of the rally (Vindeln) it was a case of win it or bin it. The pair of Norwegians were matching each others time on the splits, but “Risk Taker” Veiby spun into a snowbank. He still remained in second but any chance of the win was now gone. Behind the fight for the victory, Nickolay Gryazin was also to end his rally in a snowbank on this stage, handing third over to Finlands Jari Huttunen in the M-Sport Ford Fiesta R5 car. 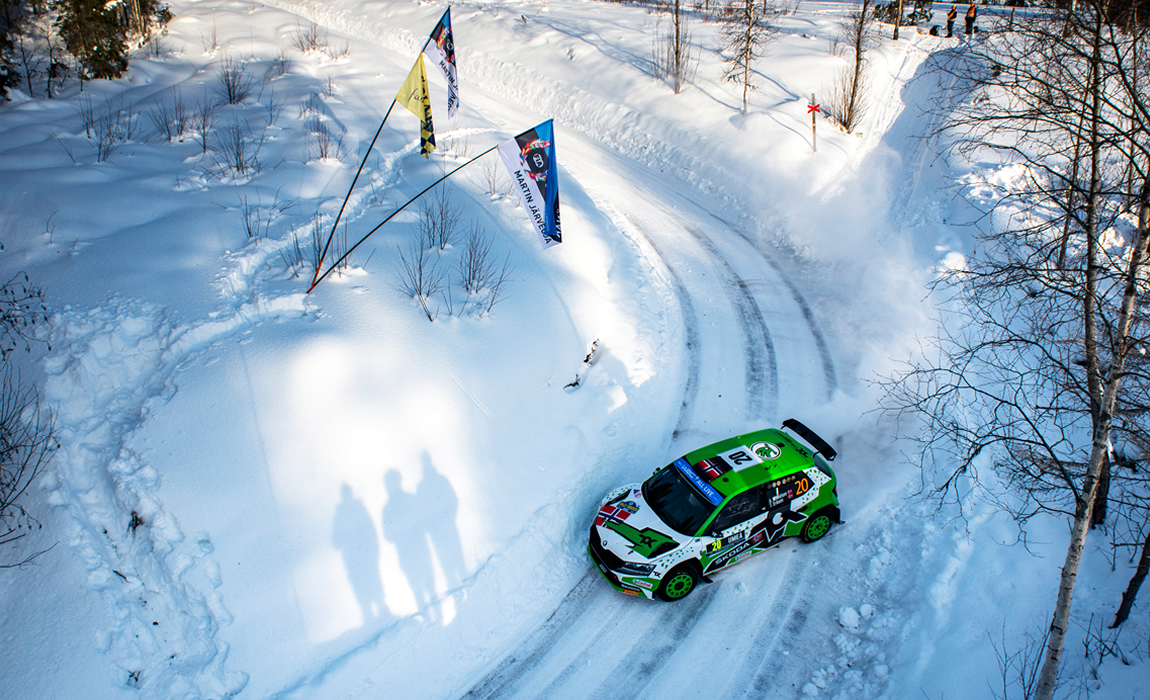 The pace is really high and he is really pushing, I need to push over the limit to even keep the same pace. I’m doing my best but I need to finish.

Reigning WRC2 Champ Andreas Mikkelsen was able to secure the win, his second victory of the season so far. He had fought off a challenge from his fellow countryman, Ole Christian Veiby who had pushed him to his limits in the Rally2 machinery. 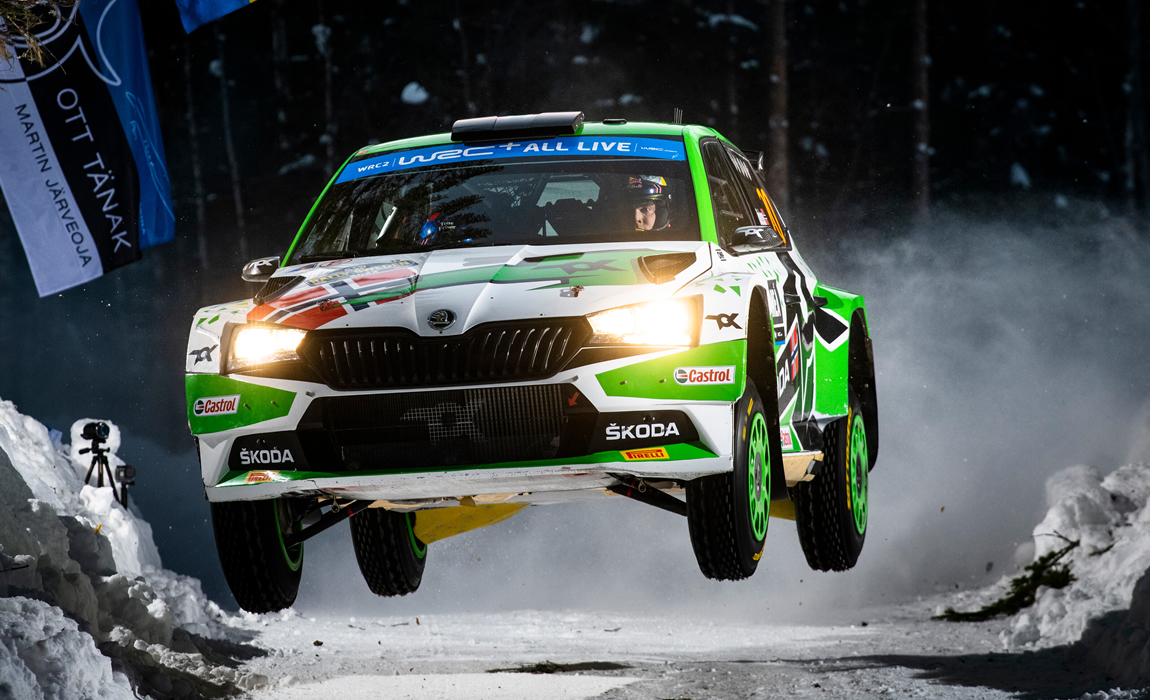 It has been one of my best fights, he (Veiby) has done a great rally. I really ejoyed the fight with him.

Jon Armstrong was resisting Lauri Joona, but only just. By securing the penultimate stage win of the rally he was heading into the final power stage of the rally with a small 3-second lead. 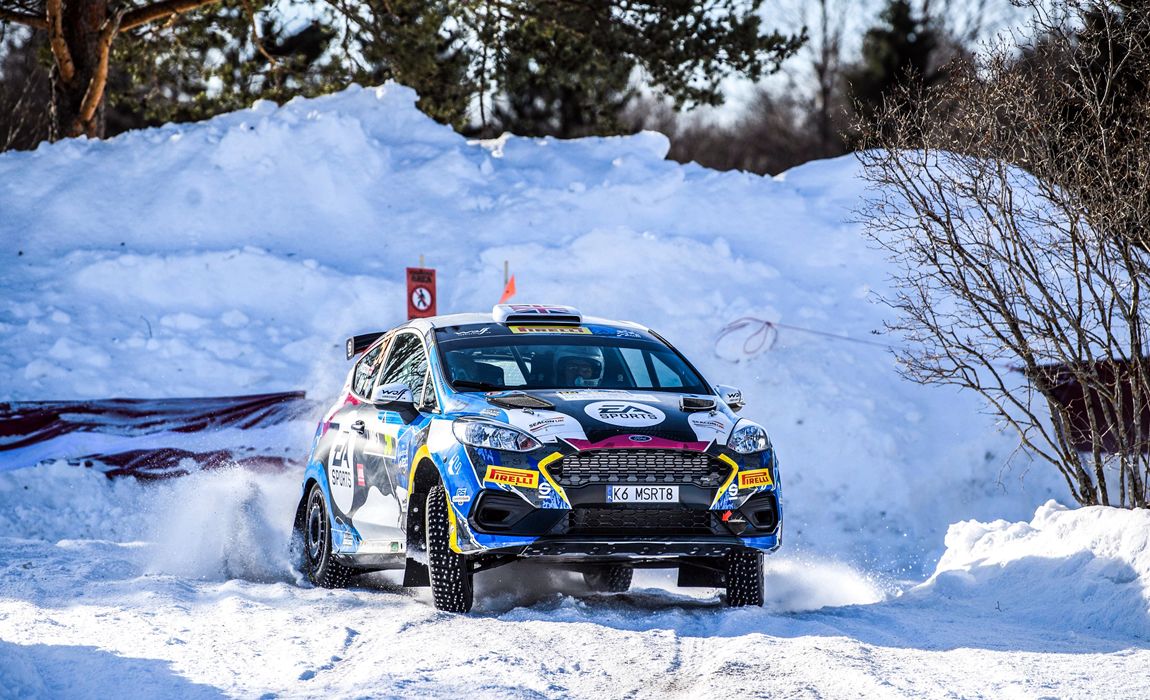 The final power stage showdown between Armstrong and Joona was a fantastic way to open the 2022 FIA Junior World Rally Championships. It had been a tough battle throughout the rally in Sweden but there could only be one victor. 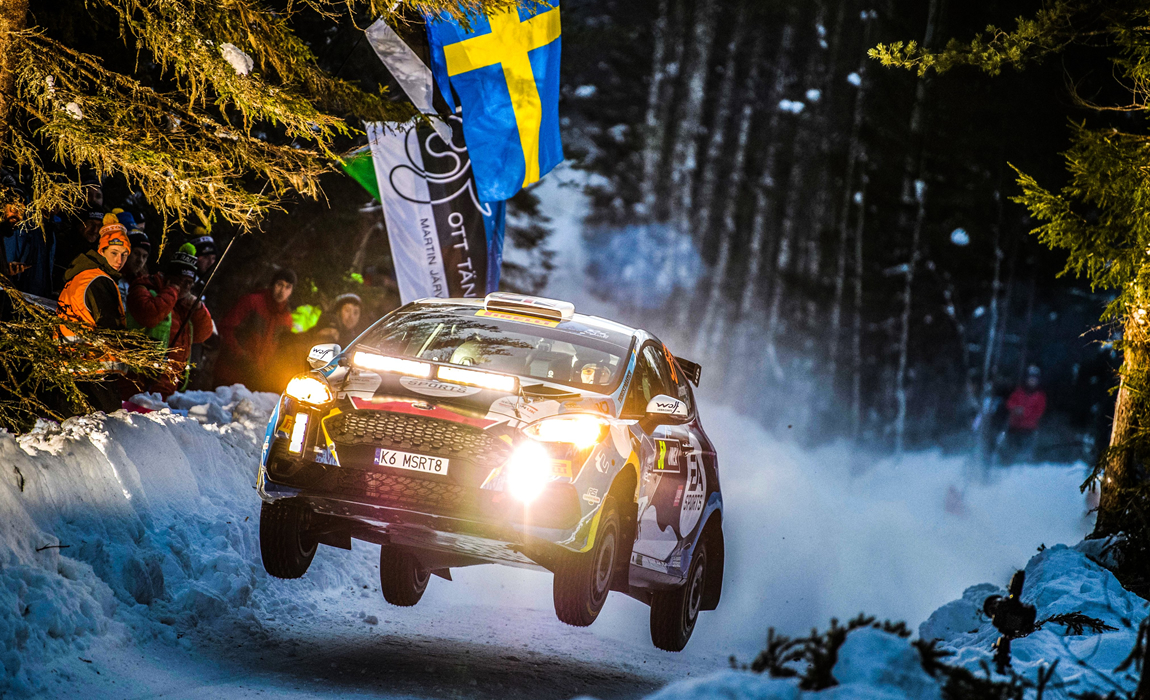 After narrowly missing out on the JWRC title last year, Jon Armstrong alongside Co-Driver Brian Hoy had done it. They had fended off a Flying Finn to claim the victory at the opening round of the 2022 Championship.

The lead of the rally had bounced back and forth between the Brit and Lauri Joona over the final morning’s stages but Amstrong emerged from the fight with a 2.7-second gap to lift the trophy.

Honestly I didnt think I was gonna be here two months ago. To come here and win is crazy. I thought a podium would be good but to take the win is something else. So surpising but what a start to the Championship.

The FIA World Rally Championship returns to Croatia 21st – 25th April for the second edition of this Asphalt event.