The MRF Tyres BTRDA Rally Series ventured into the Forests of North Yorkshire for its penultimate round of the 2022 season. The fast gravel stages dotted around the Pickering area offered up 45 competitive miles across those classic Yorkshire tests which have been synonymous with British rallying over decades. 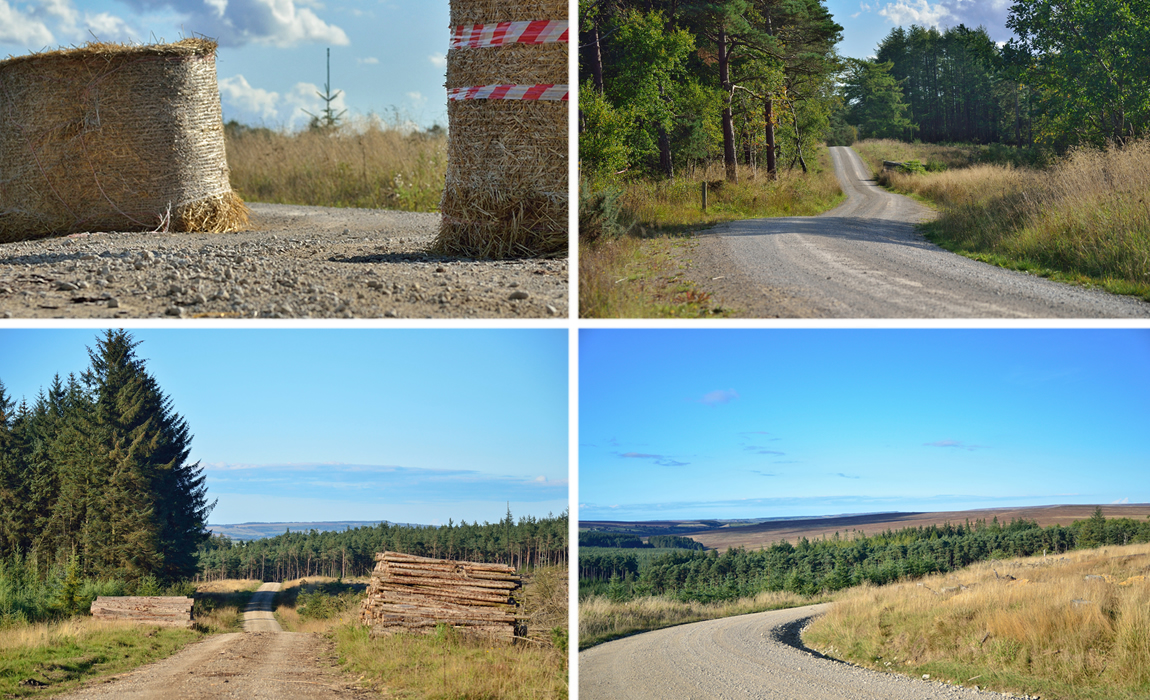 Last time out on the Woodpecker Stages, Callum Black returned to the series with a bit of a bang taking the win. However, having not set foot in a rally car in the series beforehand this year, he would play no part in the race for the GoldStar title. Also while one GoldStar hopeful Mathew Hirst recorded a DNF at the Woody, two other contenders in Elliot Payne and Perry Gardener were able to make serious ground on the GoldStar leader, Richard Hill, who arrived at the TrackRod with an eight-point lead over Payne. However taking into consideration drop scores and each of the leading competitor’s top 6 points scoring rounds, Hill, Gardener and Stephen Petch had it all to do if they were to prevent a young Master Payne from taking the GoldStar title in Yorkshire.

The rally began with an 8.5-mile test in Crompton Forest, where Elliot Payne alongside Co-Driver Patrick Walsh in their brightly coloured Mango Ford Fiesta Rally2 car were the quickest out of the blocks. Laying down a time that was 5.6 seconds faster than David Henderson, also in a Rally2 spec Ford Fiesta. With Mathew Hirst in the R5 version of the Fiesta rounding off the top three; on that opener, Payne had gotten his GoldStar title bid off to the ideal start right from the get-go. 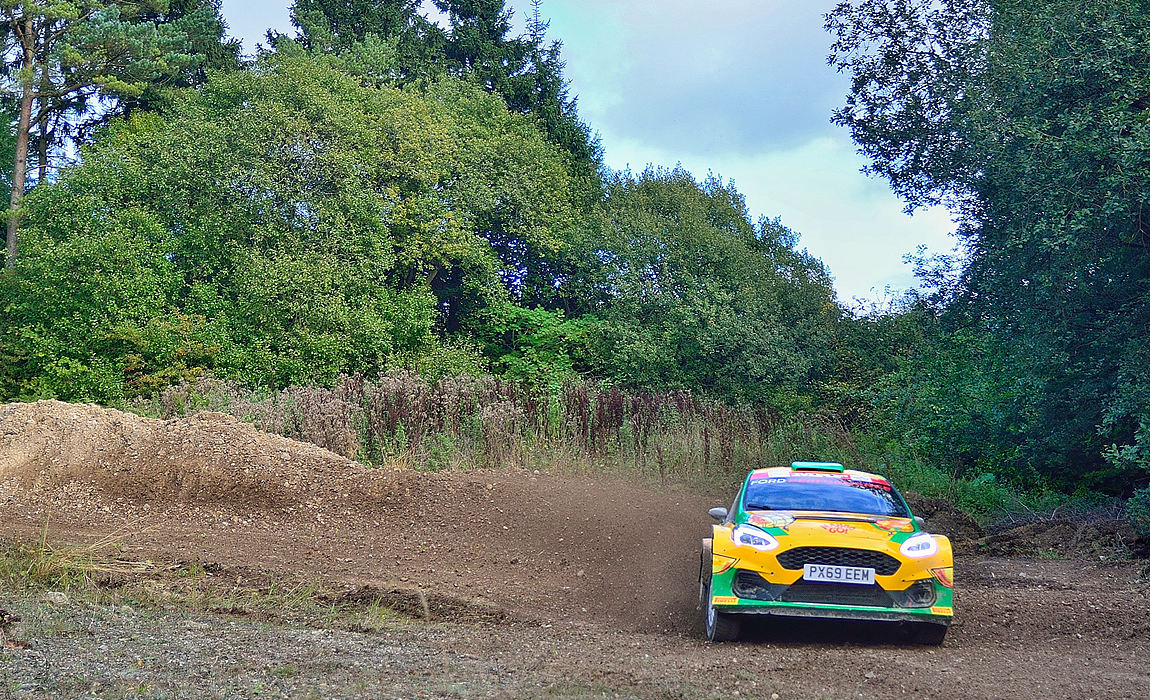 Across the road in Gale Rigg, Henderson reacted to Payne by securing his first stage win of the event. This had clawed him back 3.3 of those seconds, but Henderson did not stop there. Further to the East in Staindale Forest, he once again got the better of Payne to take the lead of the rally and headed back to service with a slender 2.5 seconds advantage. 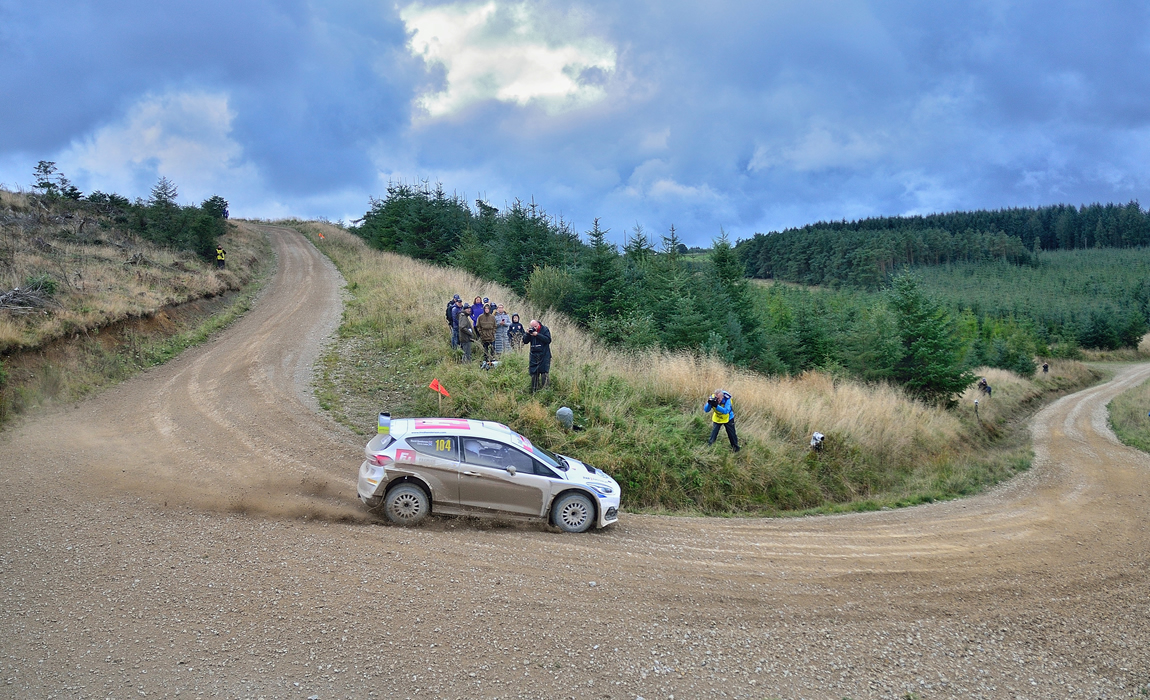 But Payne wasn’t too worried about Henderson, yes it would be nice to win this one but with the GoldStar title in his sights. With just two stages remaining, Payne was able to let Henderson just go and backed off a tad in the Penultimate stage through Langdale Forest. Callum Black would take this one, the longest stage of the rally but Black had simply left it a bit late in the day to mount any sort of challenge for the win. 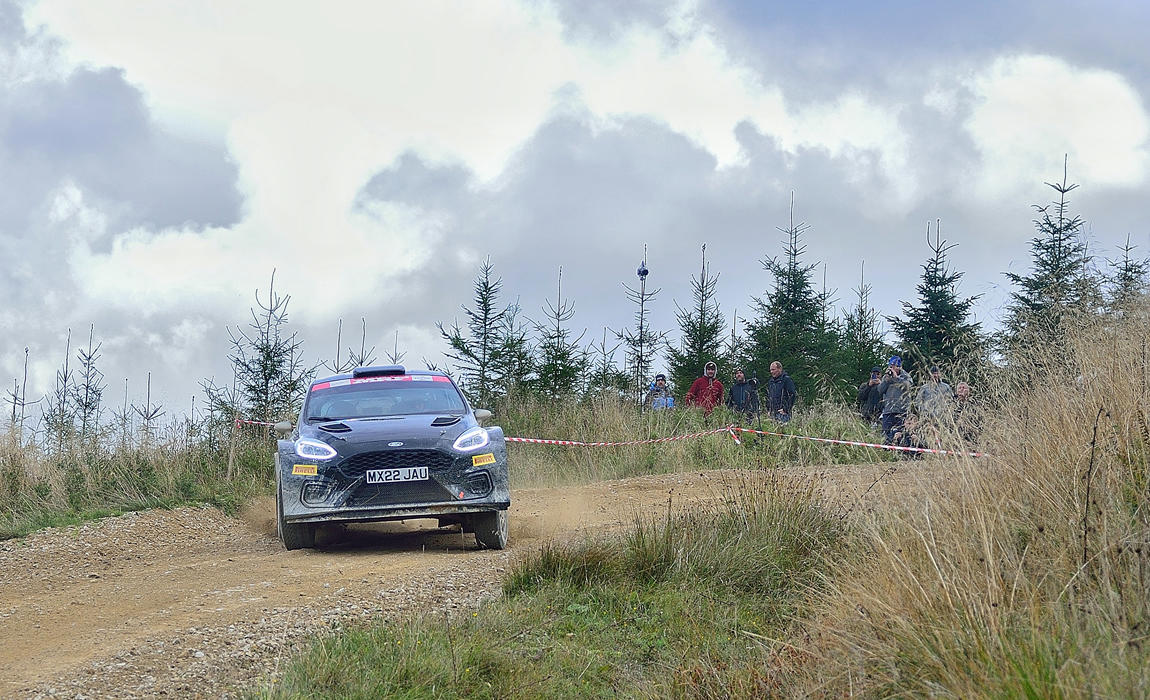 Henderson entered the final 11.23 mile Dalby test with 6 seconds in his back pocket over Payne, but Payne was not going to be tempted to go for the win when all he needed was the bring it home.

Although David Henderson alongside his Co-Driver Chris Lee crossed the finished line with 9.8 seconds in hand to Payne to claim the rally victory, the result had no bearing on the overall GoldStar Championship title fight. 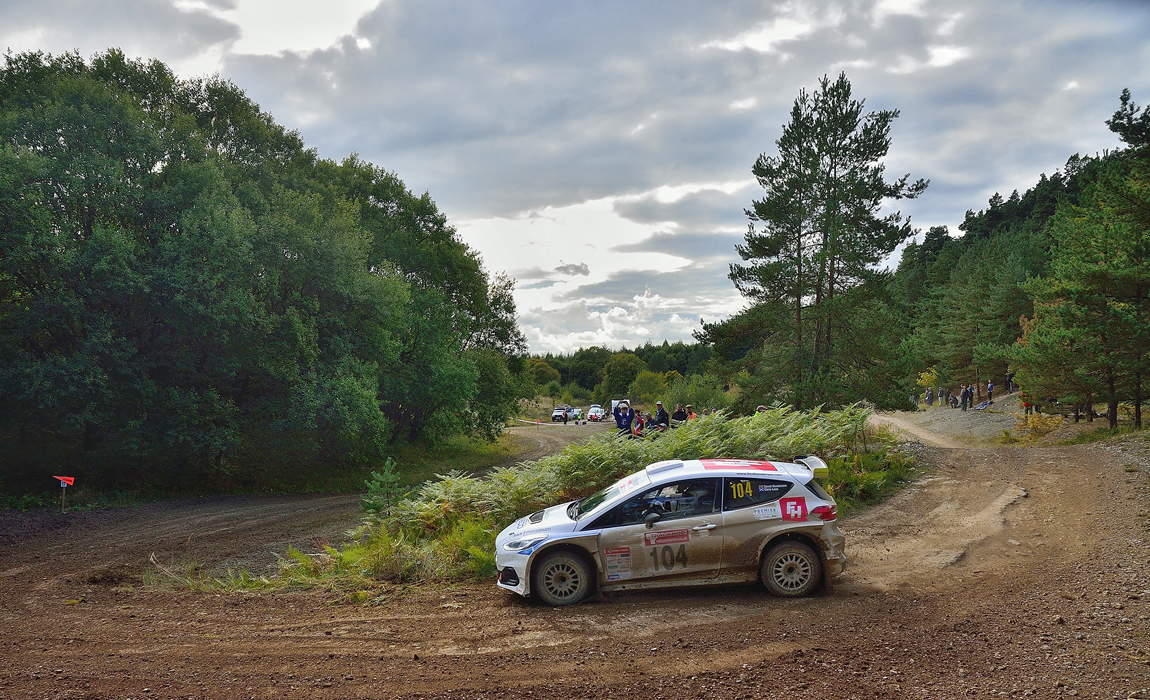 In Yorkshire, after finishing second overall, Elliot Payne and Patrick Walsh had done it. With their best 6 scores from the 8 possible events, they had now done enough to secure the 2022 MRF Tyres BTRDA GoldStar Championship honours. 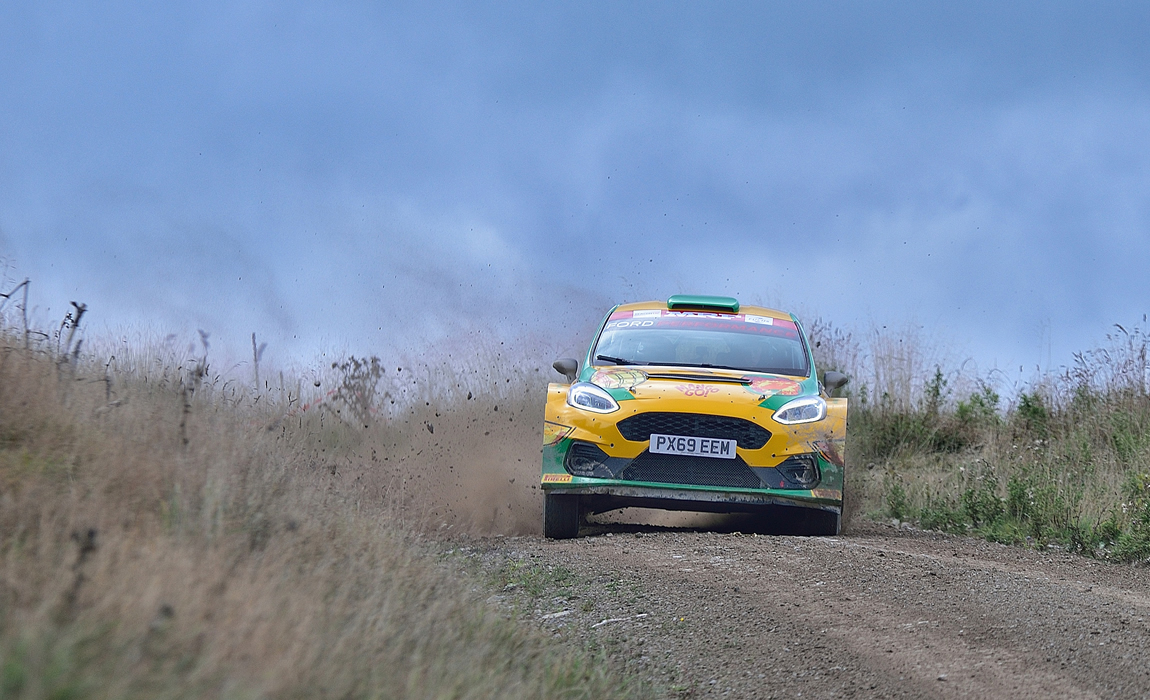 Their two victories on the Border Counties and Kielder Forest Rallys, coupled with their string of podium finishes this season had earned the pair the GoldStar award with one rally still in hand.

Last time in at the Woodpecker, Boyd Kershaw secured his first SilverStar win of the season, but the Kiwi would not be making an appearance this time out. Nick Dobson arrived in Yorkshire leading Rob Wright in the standings and a cracking SilverStar battle would ensue out on the stages. 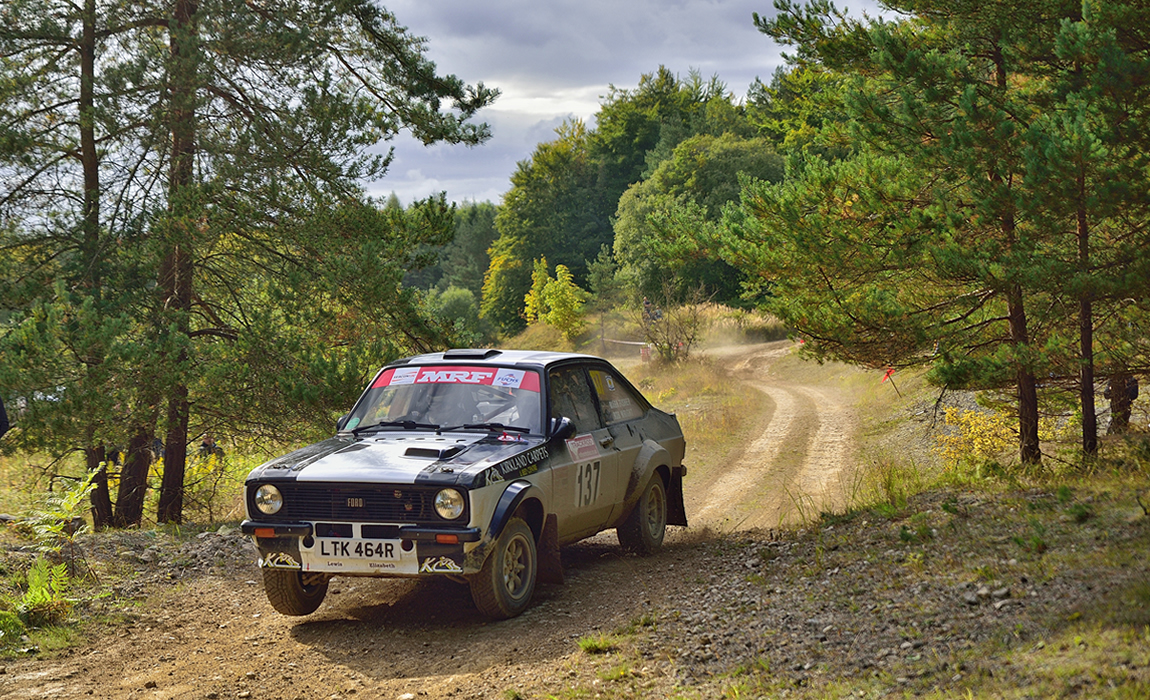 Rob Wright who had the Championship all to play for would begin the day with the open stage win in Crompton Forest. Stopping the clocks approx 8 seconds quicker than Irishman Michael McDaid; whilst his main rival Nick Dobson was caught somewhat still half asleep, some 1 minute and 41 seconds further behind. 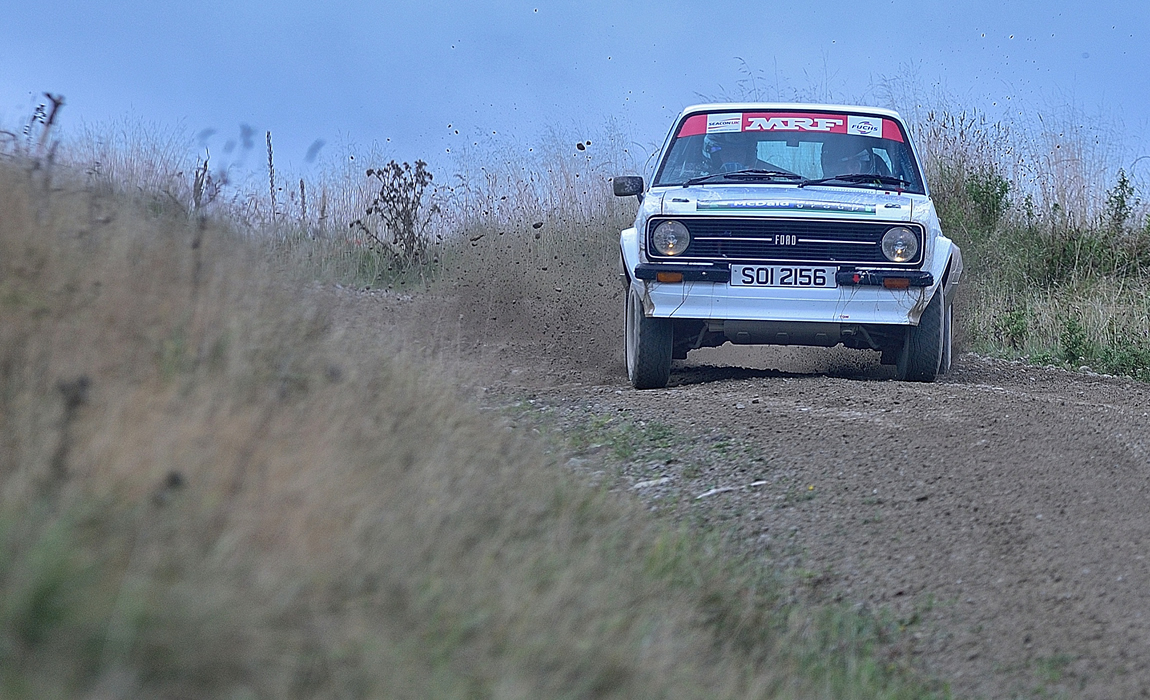 McDaid who has already missed three events is not in the mix for the SilverStar award this year, but that wasn’t going to stop him from having a good old scrap. McDaid secured the second stage win of the morning in Gale Rigg beating Wright by a small margin of just a shade over a second but Andy Davison would also be about to show his hand.

As the crew ventured into Staindale Forest, Davison who also isn’t really a contender for the SilverStar title following three DNF’s this year, decided that we wanted a bite of the Yorkshire pudding. 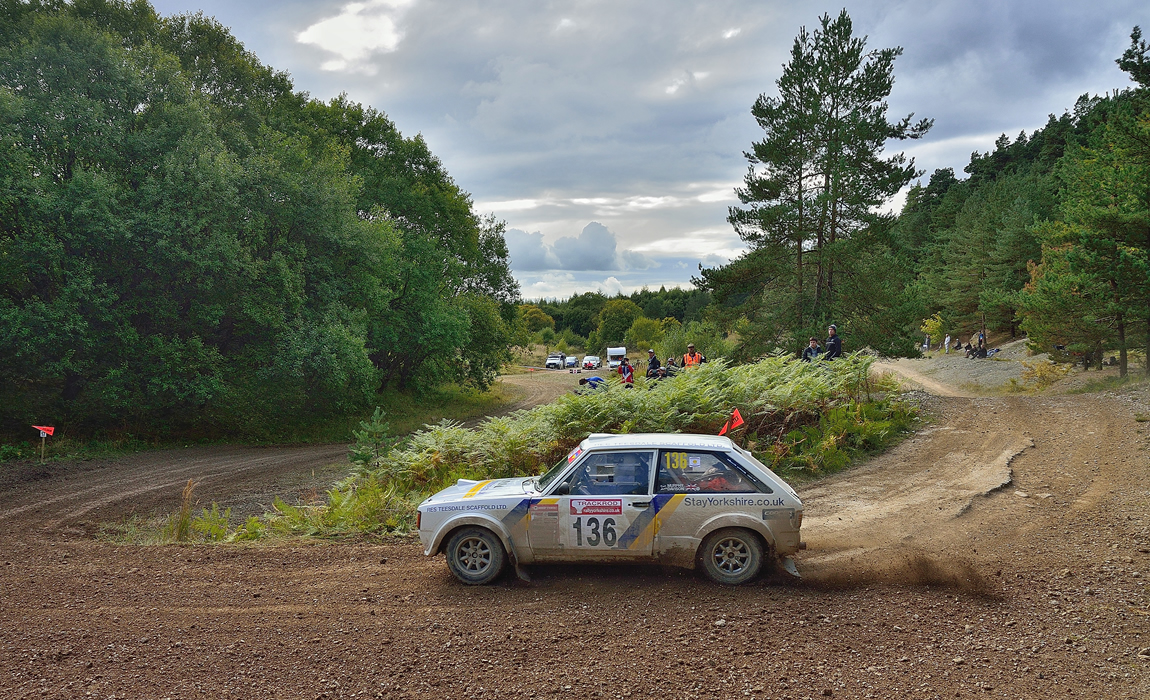 Davison netted the stage win in Staindale but Wright, alongside his Co-Driver Mark Fisher would be the ones heading back to service with a lead of 2.6 seconds over Micheal McDaid.

With just two stages remaining, while the iron was hot, Davison would strike once again in the longest test of the rally, the 13.2 miles of Langdale Forest. Davison unbelievable took a whopping 5.6 seconds out of Wright to leapfrog McDaid and take over the lead of the rally from Wright on that penultimate stage. Davison now led by just 0.2 seconds heading into the final test in the legendary Dalby Forest, oh boy what an end to this rally the SilverStar competitors were treating us to here.

Davison alongside Co-Driver Tom Murphy now on a bit of a roll secured their third stage win in a row and with it had taken the top step of the SilverStar podium. Crossing the finish line in their Talbot Sunbeam with 16 seconds over second place Rob Wright the pair had also picked up their first SilverStar win of the year. 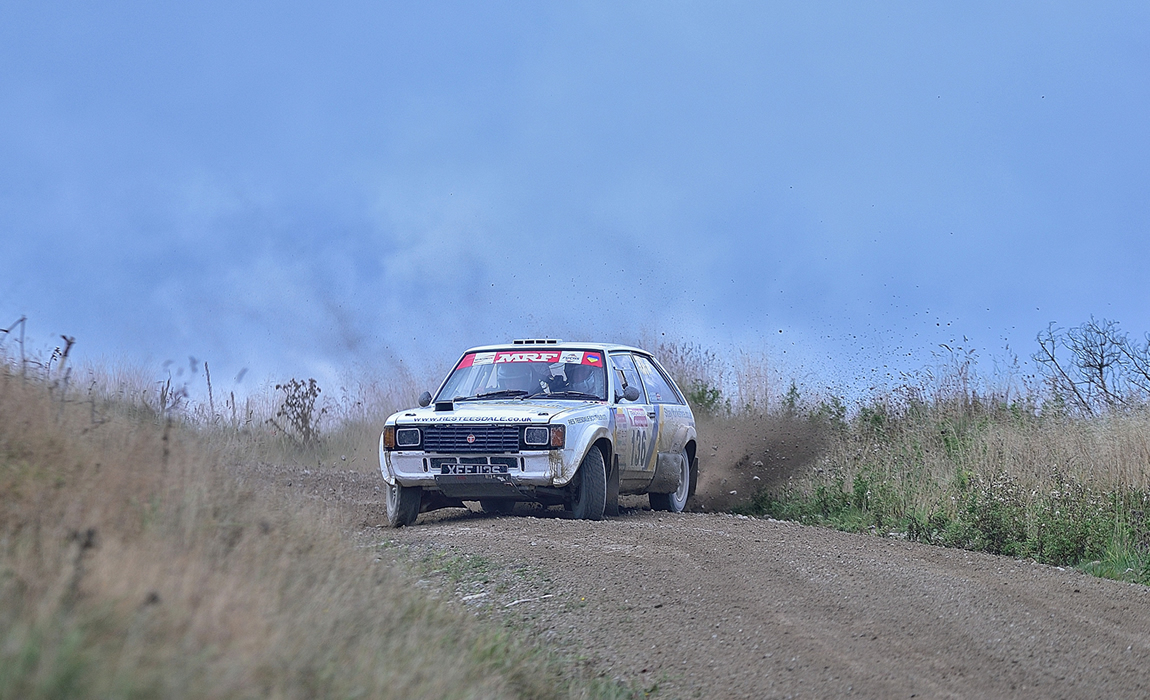 However, all was not lost for Rob Wright and Co-Driver Mark Fisher, this was their third second-place finish of the season. And because their main Championship rival Nick Dobson had finished down in 8th overall, Wright had now taken up the lead of the SilverStar heading into the final round at the Cambrian Rally. 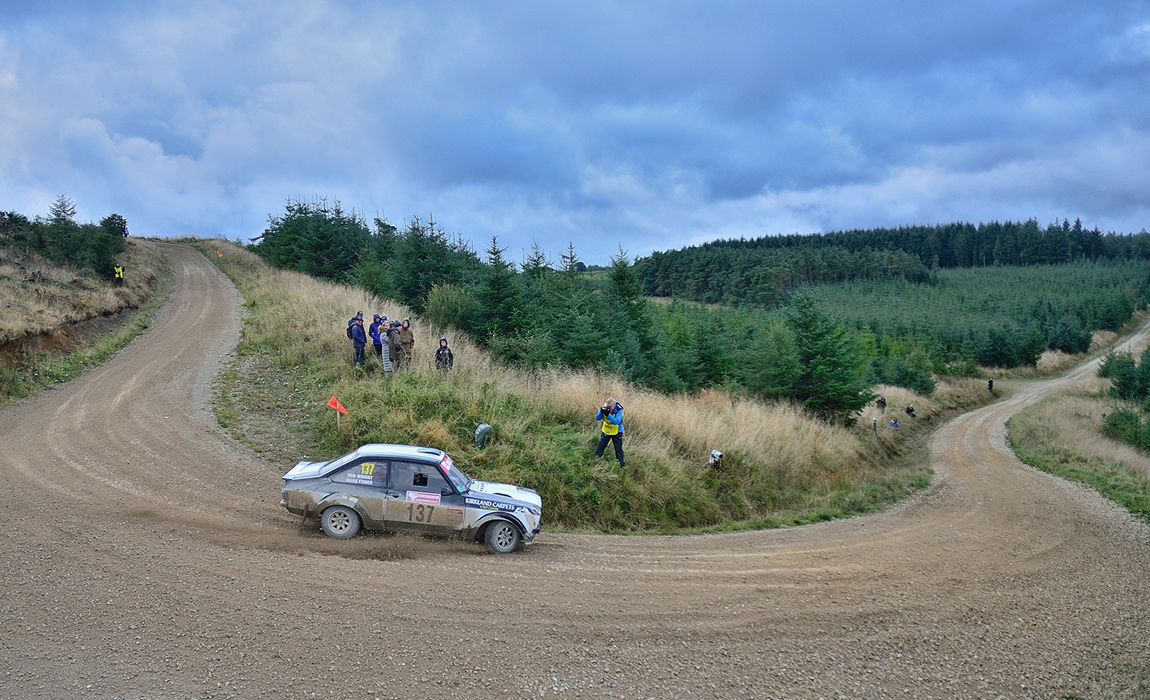 Bringing it home just outside of the podium in fourth, was Jonathan Jones alongside Jez Rogers; they round off the top three in the SilverStar standings. However, after taking into consideration the 6 of the best scores for each competitor, it is now looking like a two-horse race between Wright and Dobson heading into the finale in North Wales; where some number crunching could well be a possibility depending on the outcome.

Last time out on the Woodpecker, Dave Brick denied Nigel Jenkins of his second win, but Jenkins would be back in full effect in Yorkshire with the only competition coming from BronzeStar Championship hopeful, Pete Gorst.

Although the timings would not be matched out on the stages by the Rally First Nissan Micra being driven by Lewis Hooper; and despite Hooper missing out on the last round in Ludlow. Hooper would still, however, be well and truly in the mix for the BronzeStar title hopes.

Pete Gorst has three wins to his name but also has two DNF’s; a strong podium at the Woody left him with just the final two rounds at the TrackRod and Cambrian to do the business at. However, the likes of Nigel and Karren Jenkins, also in a similar spec 1400 Vauxhall Nova would prevent Gorst from taking maximum points in Yorkshire. 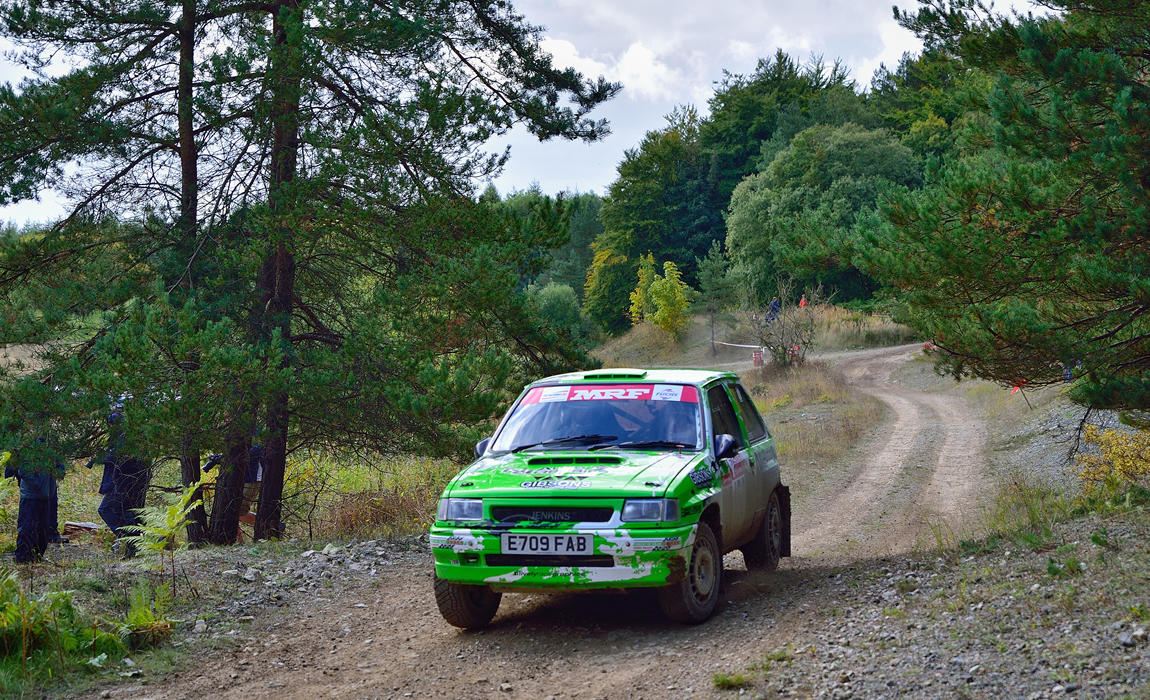 The Jenkins paring came out strong from the off, posting a trio of fastest stage times in the morning loop of three stages and they would head back to service halt with 7.3 seconds advantage over Gorst. Meanwhile, Lewis Hooper in his Micra was holding up the third spot on the BronzeStar podium, which at that point in time, was on track for retaining the lead of the overall standings. 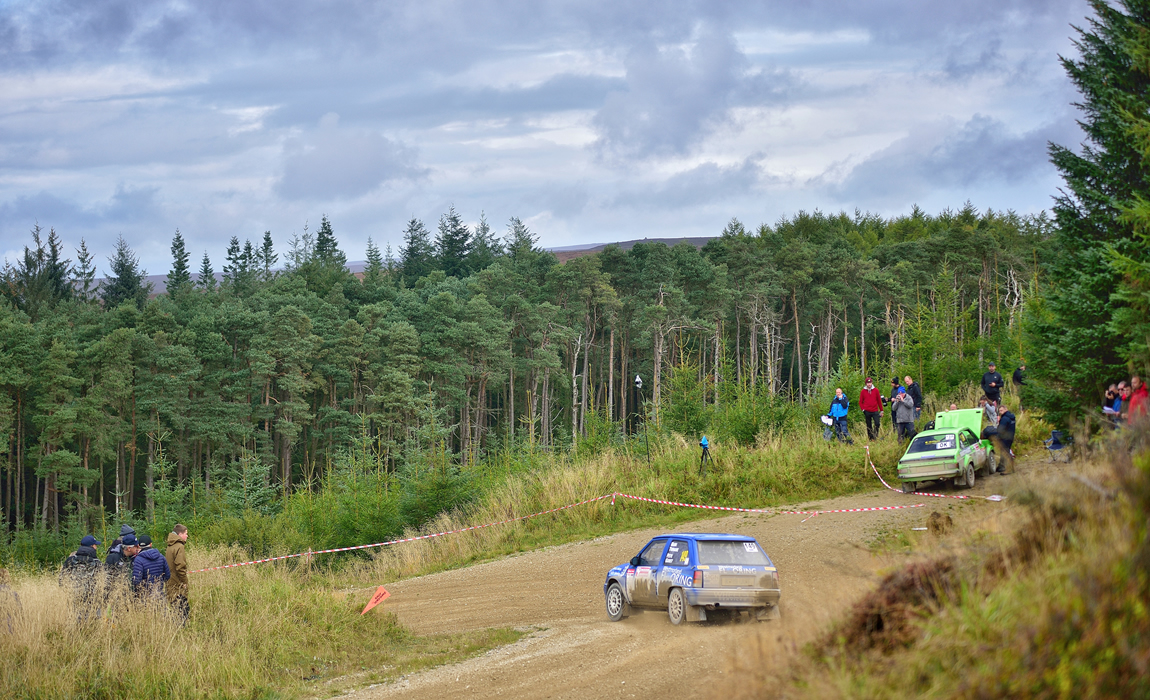 With just two final stages to go, Gorst had a bit of work to do, if he was to snatch the win from Jenkins. Back out after service and Gorst did manage to get his first stage win in the longest test through Langdale Forest but was still some 5.3 seconds off of Jenkins heading into the final stage of the rally.

Dalby Forest would offer up one final blast over 11.23 miles of prime Yorkshire gravel, but would Gorst go all out, risk it for a biscuit and chase Jenkins down for the win or would he settle for second and a decent points haul? 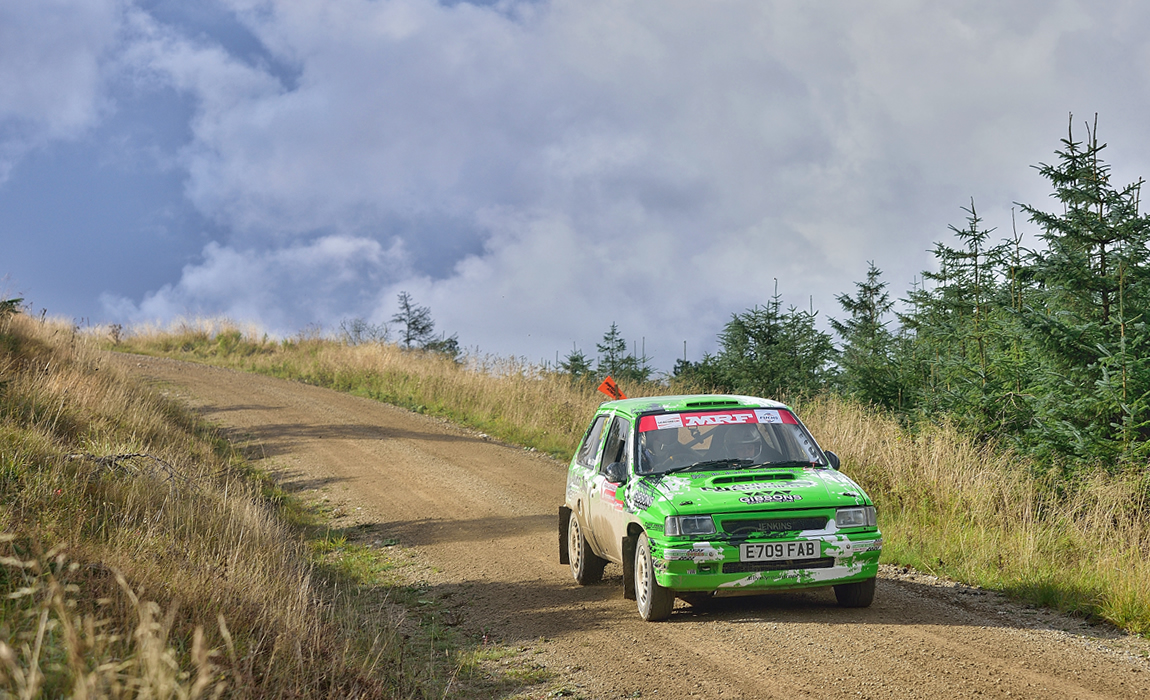 Nigel and Karen Jenkins emerged from Dalby Forest as the BronzeStar victors, netting their second win of the season after crossing the finish line 16.8 seconds ahead of Pete Gorst and his Co-Driver Mark Twiname.

Gorst and Twiname had indeed played it sensibly in that final stage, opting for those vital Championship points and taking the fight on into the season final at the Cambrian. 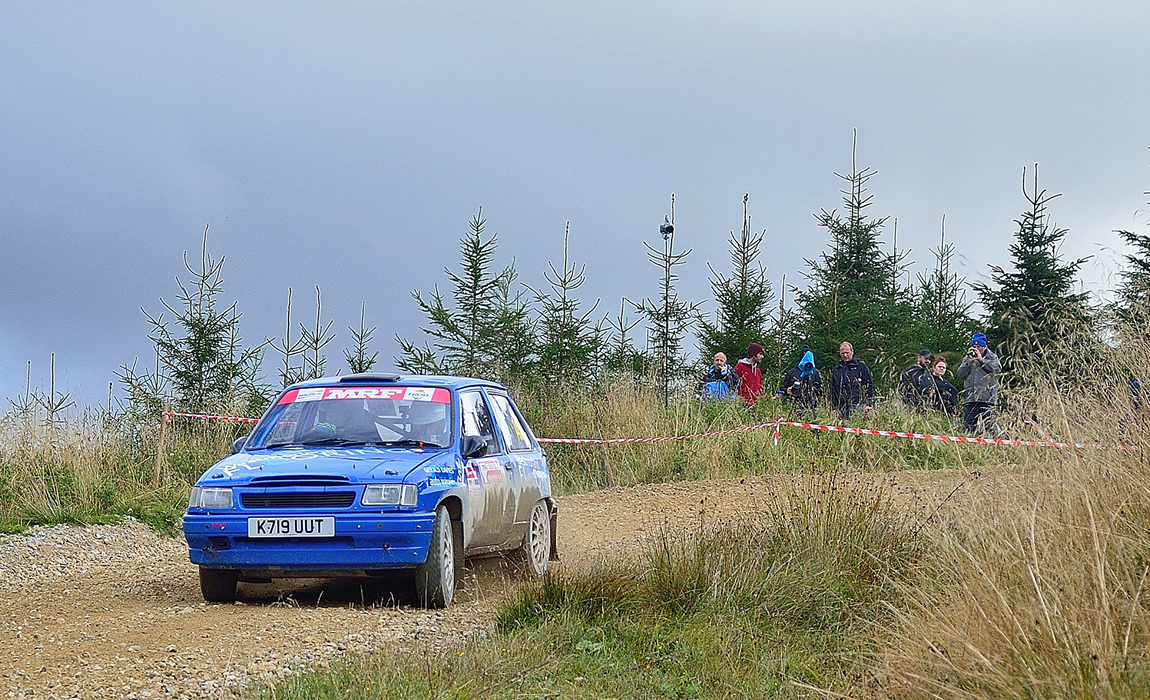 And that final rally battle of the year will be with Lewis Hooper and Steven Brown who peddled their trusty little Rally First Nissan Micra home to round off the BronzeStar podium. 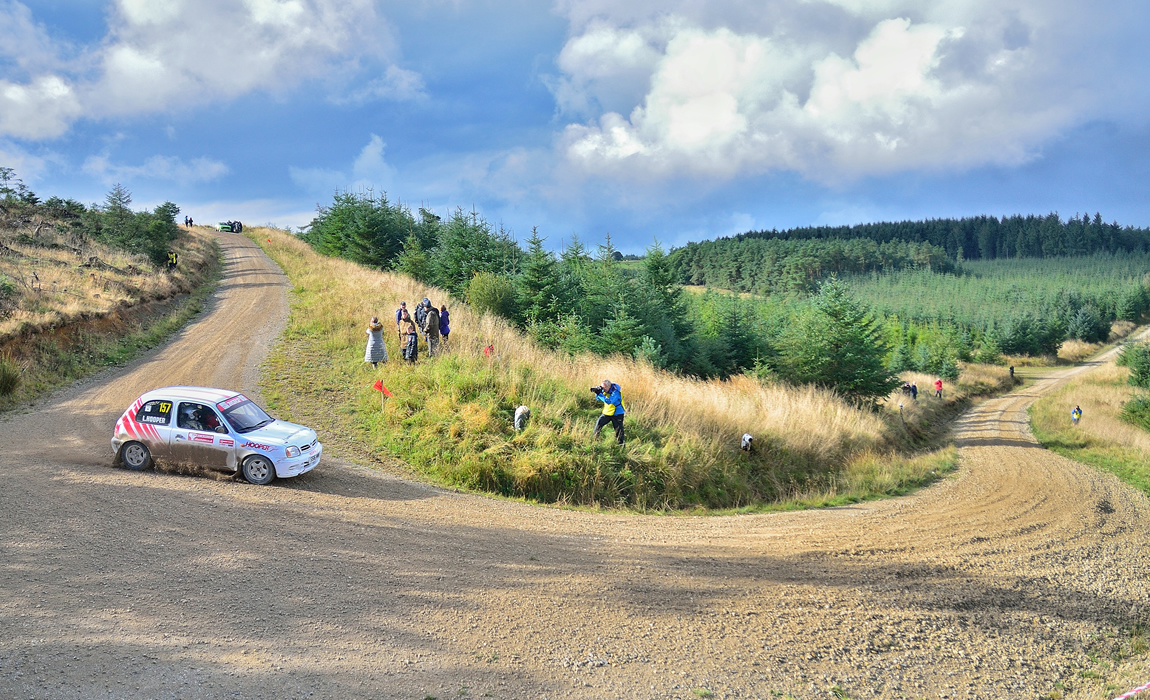 Hooper is leading the standings heading into the final rally and mathematically, he along with both Gorst and perhaps Edward James (who scored a DNF in Yorkshire) could be taking the title in North Wales at the end of October… the question is, who is your money on? 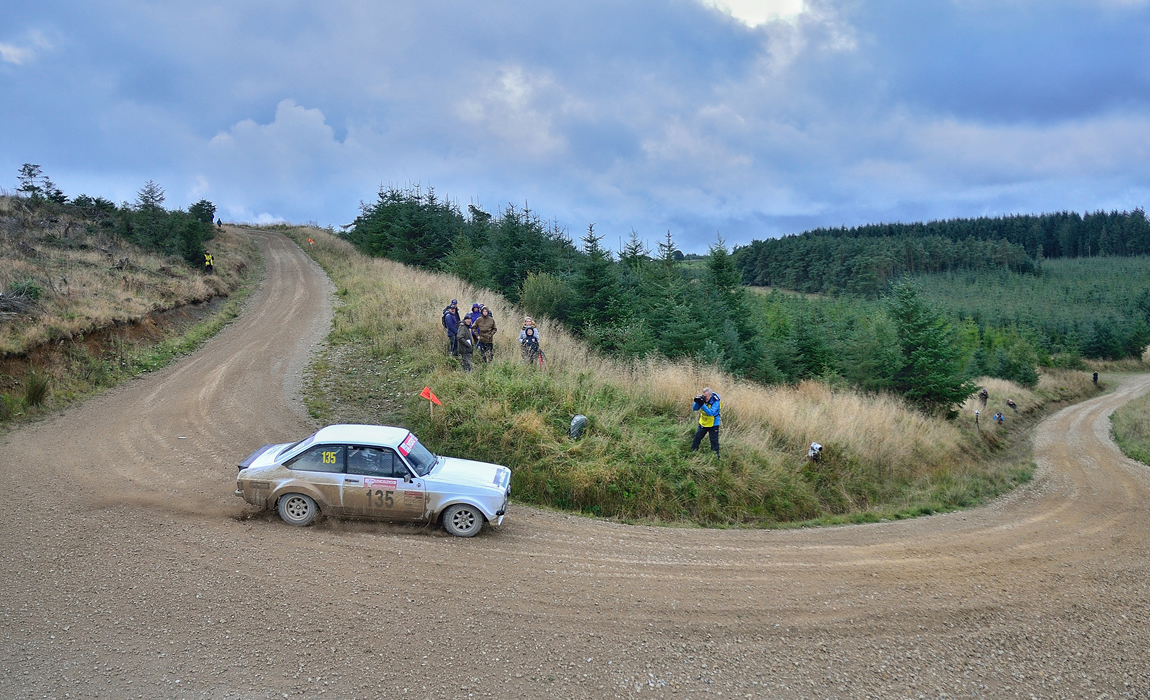 On the Historics front, Micheal McDaid and Warren Philliskirk shared the Historic Cup honours. Irishman McDaid in his H3 Class MK2 Ford Escort romped home with a full house of fastest stage times across the Historic classes, bettering Grant Inglis in the H3 field as he went. 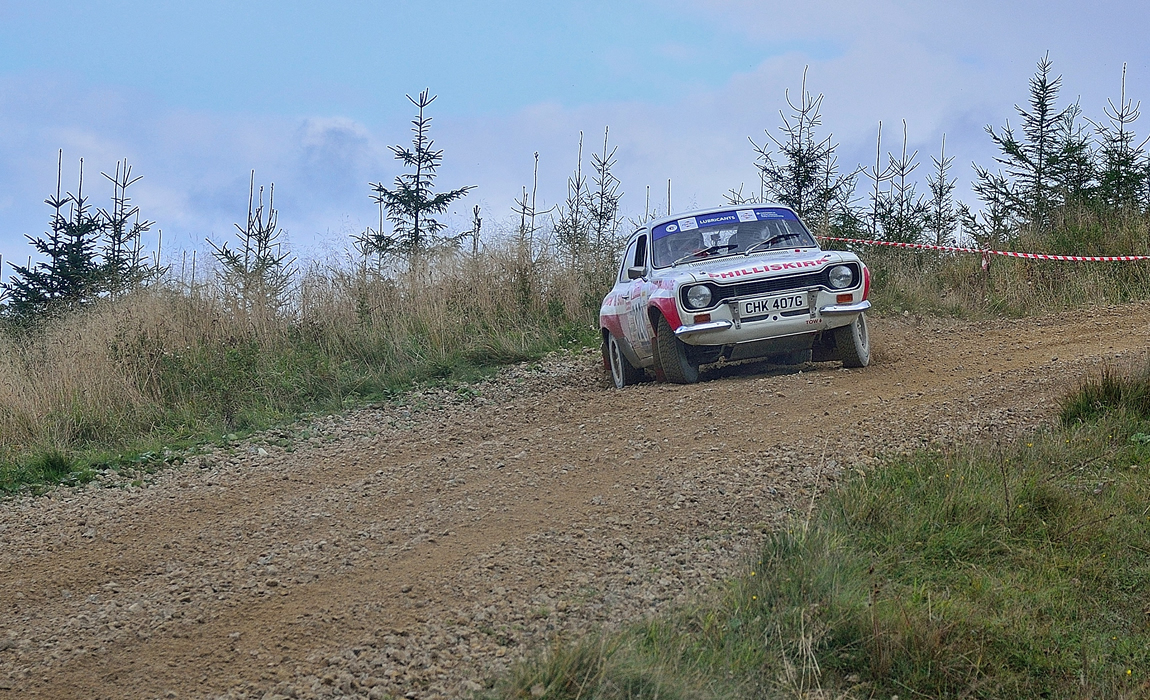 Meanwhile, Philliskirk took the H1/H2 Class win in his MK1 Ford Escort after a nice little skirmish with the Hillman Avenger of Barry Jordon. 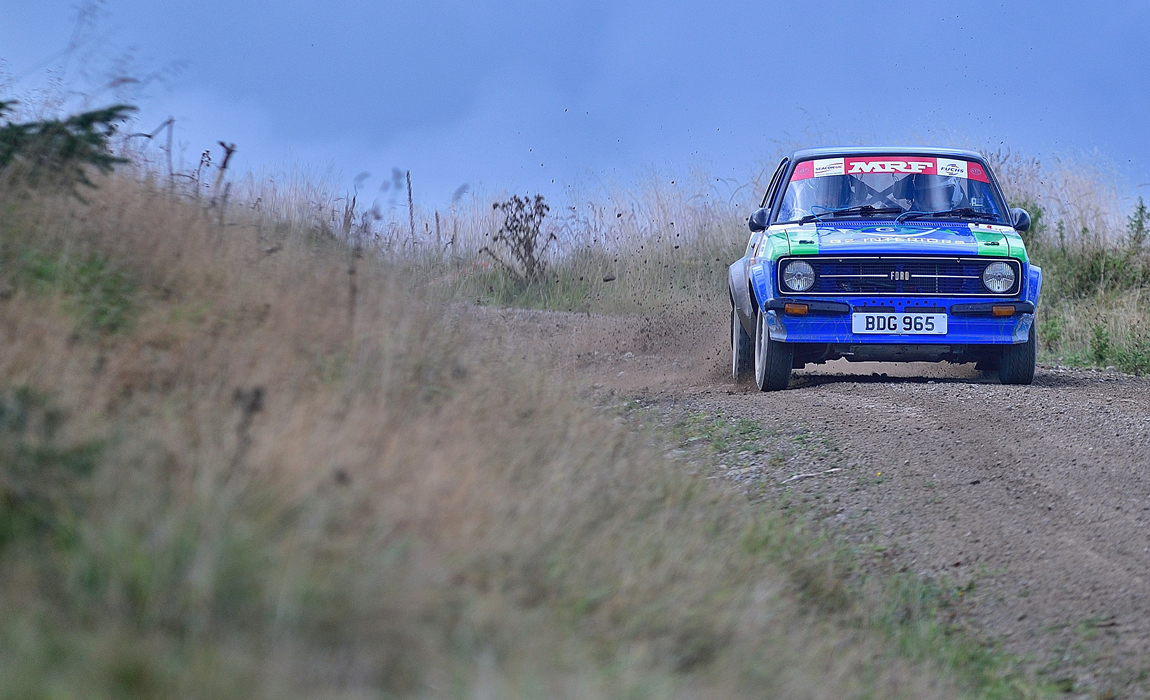 Grant Inglis still leads Mcdaid in the Historic Cup standings (plus H2 Class) heading into the final round at the Cambrian. Jonathan Brace who did not compete in Yorkshire (Brace does, however, lead the H1/H2 class standings) rounding off the top three. Although McDaid has only competed on four rounds, they have all been maximum points-scoring ones, whereas Inglis has had a couple of low-scoring DNF’s this season.

The MRF Tyres BTRDA Rally Series heads to Llandudno North Wales for the season final at the Cambrian Rally (29th Oct). Although Payne has already wrapped up the GoldStar, there are still plenty more categories and awards up for grabs. 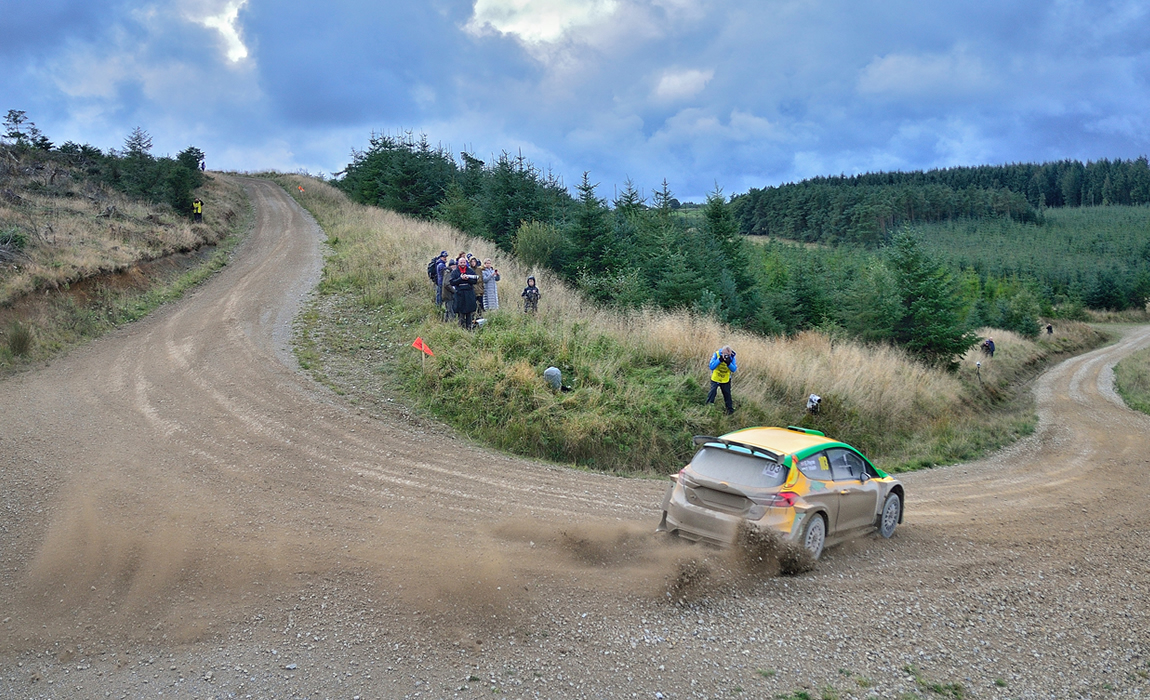