The MRF Tyres sponsored BTRDA Rally series arrived for its season finale in Llandudno, North Wales at the Visit Conway Cambrian Rally. Here is where the crews were faced with 8 tough gravel stages, covering 45 miles. These world-class stages offered up the highest possible challenge for what this area of North Wales has to offer and was the ideal way to end the season. 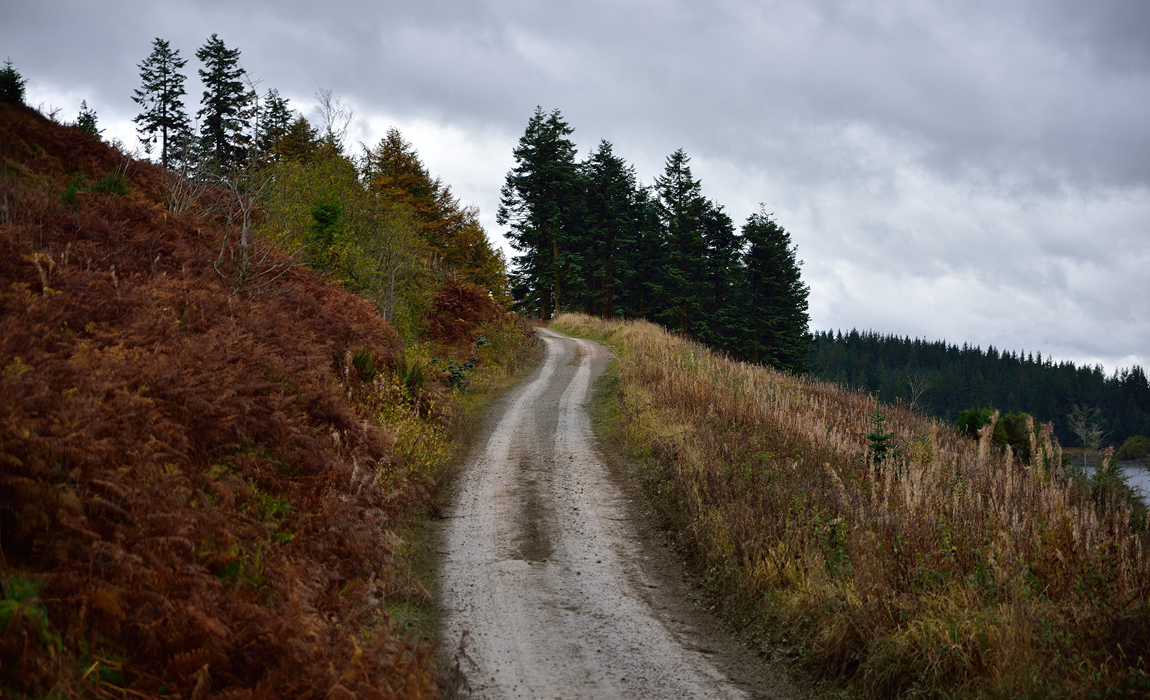 Last time out in Yorkshire at the TrackRod, Elliot Payne alongside Co-Driver Patrick Walsh was able to secure the 2022 GoldStar title honours. Meanwhile, in the SilverStar, the only two horses that remained in the race for the title after Yorkshire, Rob Wright & Nick Dobson would both refrain from taking on the Cambrian. Therefore, Rob Wright would be crowned the 2022 SilverStar winner without making an appearance in North Wales, however, the BronzeStar battle on the other hand would indeed go down to the wire.

The rally got underway in somewhat gloomy conditions with a six-and-a-half mile stage in the East side of Clocaenog Forest. Here on the longest stage of the rally, Matthew Hirst was the quickest horse out of the stables in his Ford Fiesta R5. Recently crowned Welsh National Champ, Hirst was looking to secure the GoldStar series runners-up spot and had posted a time that was just 1.2 seconds quicker than the newer Rally2 spec Ford Fiesta that was being driven by Round 6 winner, Callum Black. 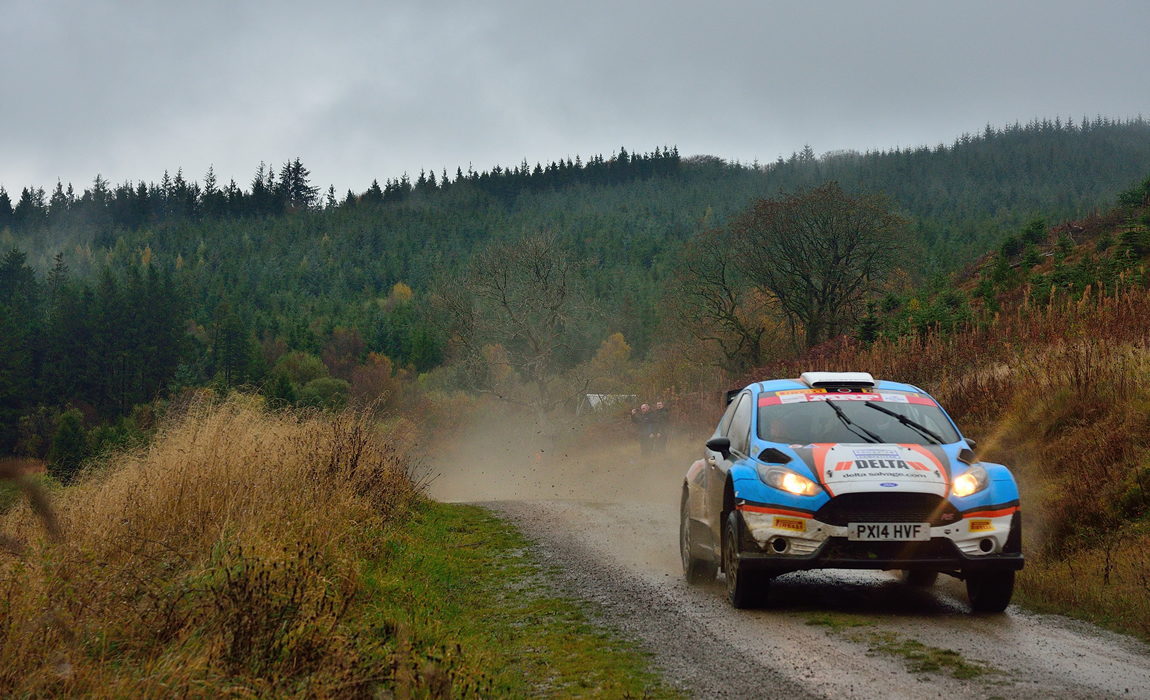 Black responded right away in the very next stage beside the Brenig Reservoir, for which then appeared to induce a ding-dong battle between the pair. Hirst came back at Black in Alwen, the third stage of the morning loop to regain the lead but Black just refused to let Hirst take up that position at the top of the leaderboard. 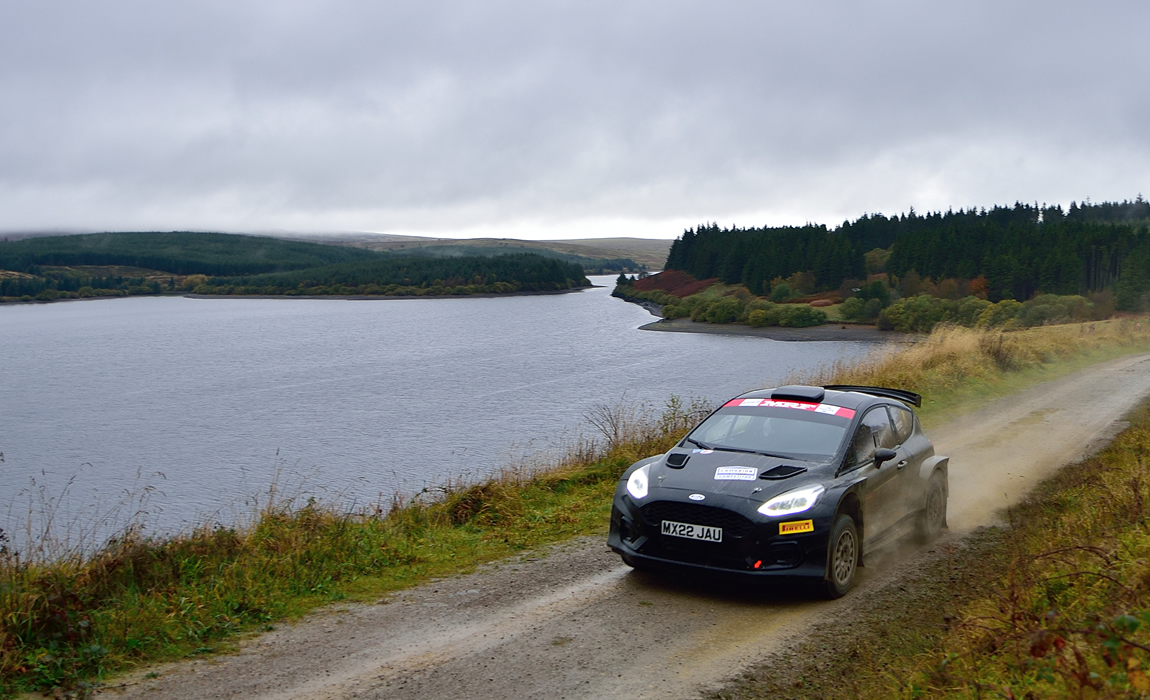 Black pipped Hirst by just 0.7 seconds in the final stage of the morning loop through the northern end of Penmachno and was heading into the mid-day service halt with a slender 0.4 seconds advantage over Hirst. The pair had fought tooth and nail over the mornings’ loop and with two stage wins each to show, there really was nothing between them at the halfway point.

Recently crowned GoldStar Champ, Elliot Payne clearly wasn’t interested in being sucked into that scrap for the rally win out front. A little further behind in third, Payne appeared happy to just do his own thing and enjoy the world-class stages that were on offer, without any pressure. 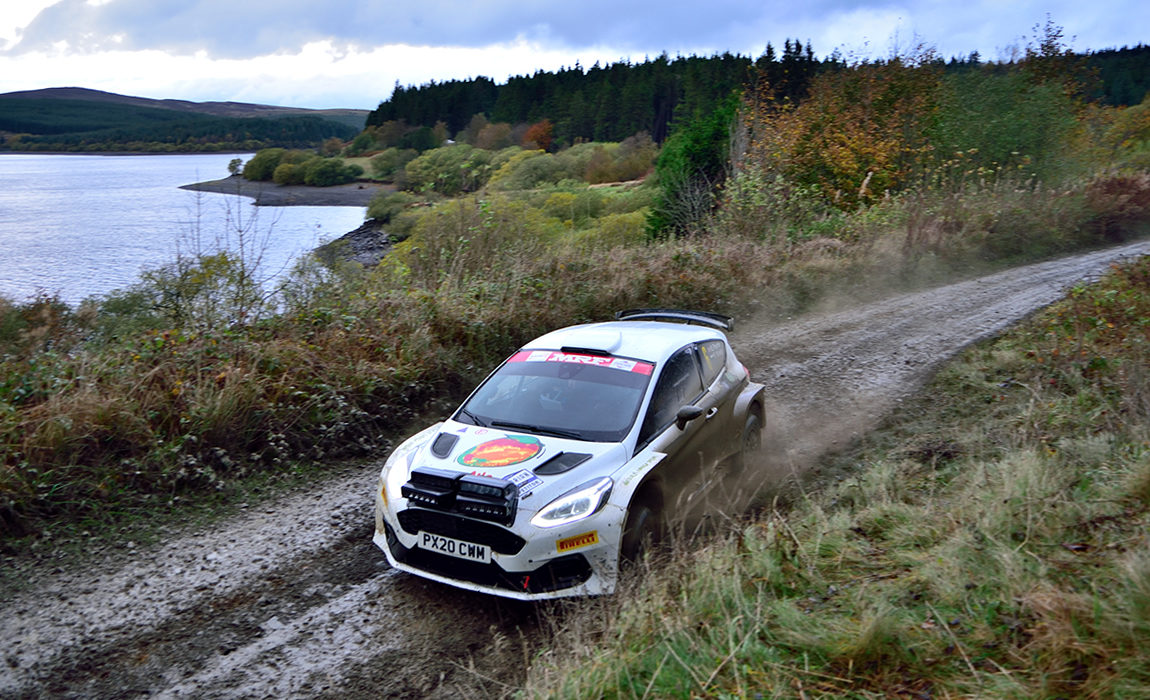 The crews returned to action for the final loop of stages of the year and after that first of the repeated runs through Clocaenog, it was clear that Hirst was going to be the man to rejoice in North Wales. That morning battle with Callum Black would unfortunately not continue on into the afternoon stages. Black alongside Co-Driver Jack Morton was struck with double punctures, in both Clocaenog and the following Brenig test and was ultimately forced into retirement from the event.

The unfortunate demise of Black and Morton cleared the way for Matthew Hirst and Declan Dear to romp home unchallenged; with a full house of stage wins across the afternoons’ loop, they had secured the rally victory, and with it, their third win of the season. The pair crossed the finish line along the Llandudno promenade with more than 53 seconds in hand to runners up, Elliot Payne and Patrick Walsh. Rounding off the third spot on the GoldStar podium was Robert Wilson alongside Richard Morton Crozier in their Mitsubishi Lancer Evo VII. 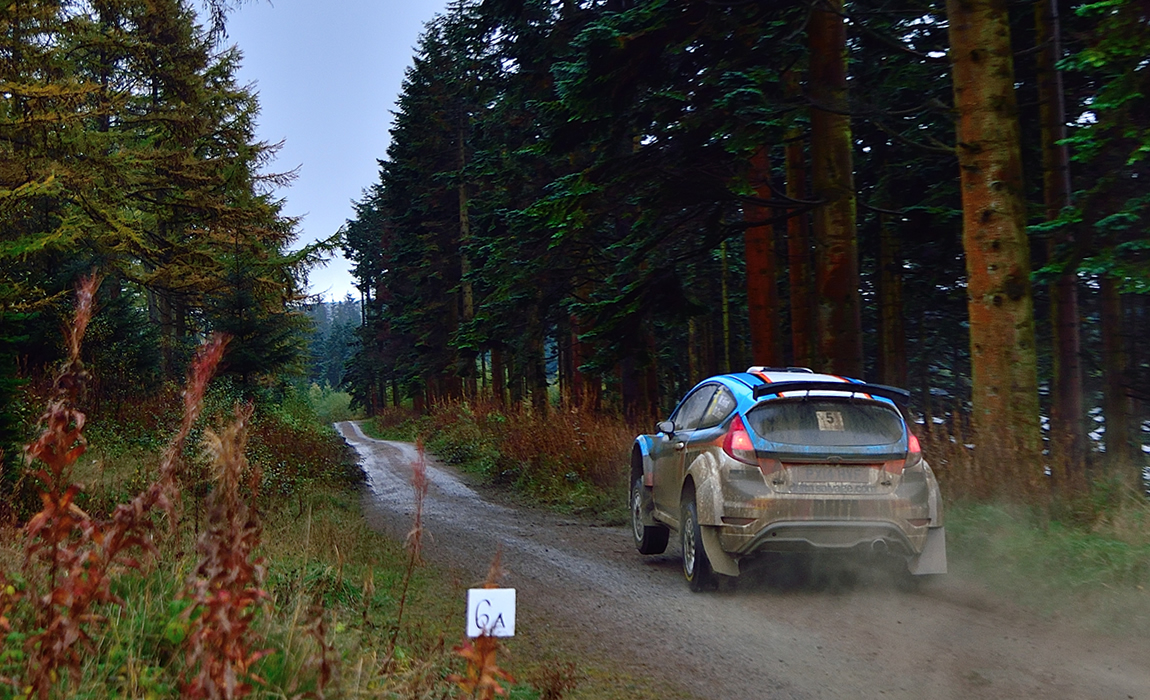 Hirst and Dear’s efforts in North Wales and that final win meant that they had surpassed no-show Stephen Petch by just three points and therefore they had indeed secured the GoldStar runners-up spot for the year. Ludlow lad Perry Gardener ended his season with a DNF at the Cambrian after only completing the morning loop of stages. Gardener’s early bath meant that he was unable to better himself and ended up in joint 4th place in the overall GoldStar Championship standings matched on points with Russ Thompson, they both had fallen short of Petch by some 8 points in North Wales.

With both the title and runners-up spot already sewn up by the likes of Rob Wright and Nick Dobson, there wasn’t really anything left to play for Championship-wise at the Cambrian. Except, maybe the third place was still in question between the likes of Micheal McDaid and Jonathan Jones but that was about the size of it heading to Llandudno.

Jason Lepley would be the man the set the benchmark time in his MK2 Ford Escort on the opening test through Clocaenog Forest. 3.7 seconds was enough to take up the lead of the SilverStar contenders, with Paul Thompson in second and the Ford Fiesta of Tony Simpson in third. Simpson was able to get the better of Thompson in the second stage of the morning through Brenig, but due to a stage stoppage, the third test in Alwen was canned which resulted in notational times being awarded. 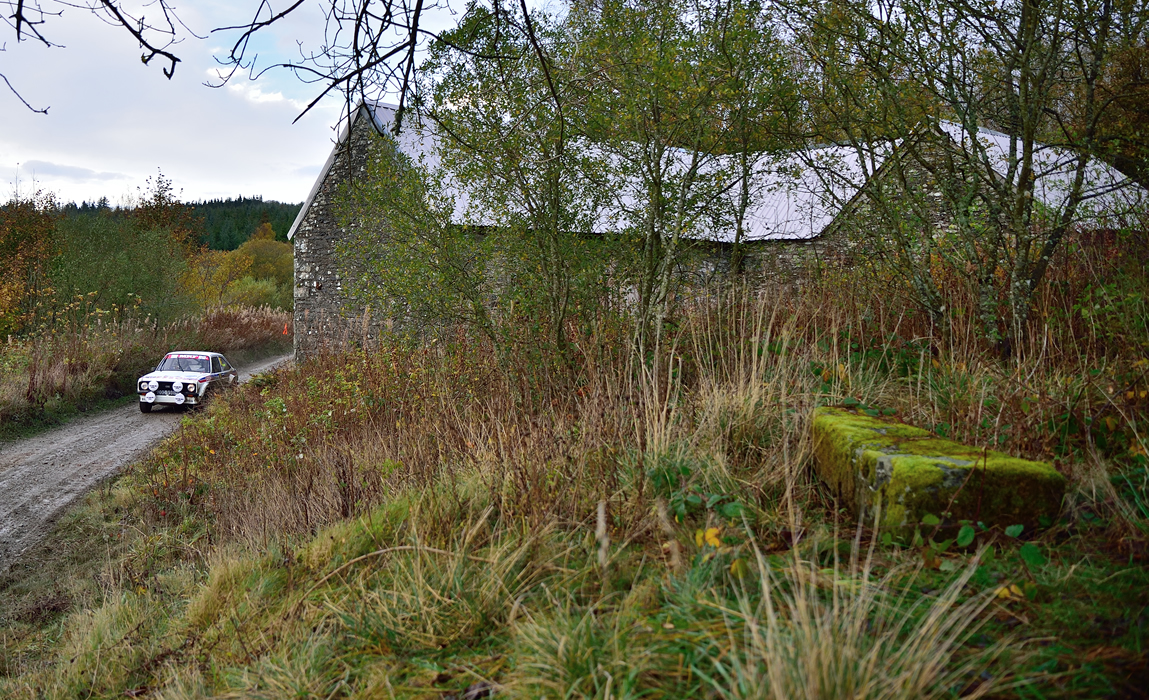 Jason Lepley alongside Co-Driver Simon Jones picked up their third fastest stage time in the final test of the morning through Penmachno to end the loop with a decent enough lead over Paul Thompson & Josh Davison. Although Tony Simpson held on to the third spot, Irishman Micheal McDaid had begun to wake up in that Penmachno stage and was beginning to make a move up the leaderboard.

Back out after service and McDaid alongside Declan Casey were clearly back in the game and on a bit of a charge. Securing their first fastest stage time in the repeat of the Clocaenog test, things were beginning to head in the right direction for them.

Lepley with one close eye on McDaid continued to power on through the afternoons’ loop, after securing his fifth fastest stage time in SS6 Brenig 2, he was holding off a surging McDaid who had also netted the fastest time in the penultimate stage in Alwen. Lepley, however, was heading into the final stage of the rally with a pretty sizable lead to defend and perhaps, in reality, wasn’t going to be troubled by McDaid. 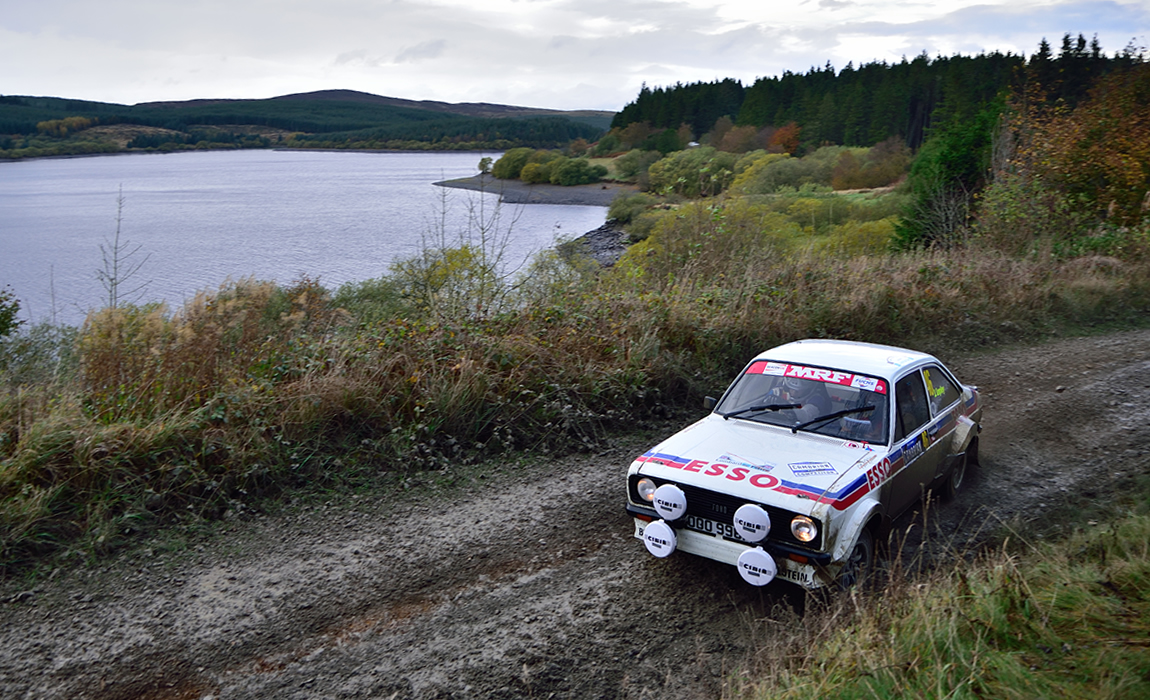 Jason Lepley alongside Simon Jones calling the notes was able to secure the top step of the SilverStar podium in North Wales. Lepley had finished the event with more than half a minute in his back pocket over McDaid, who secured the runner-up spot, some 24 seconds ahead of Paul Thompson.

Micheal McDaid was, however, able to confirm his third overall in the 2022 SilverStar award Championship standings, having only contested 5 rounds. Jonathan Jones ended up 4th and Paul Thompson rounded off the top 5 in SilverStar Championship. 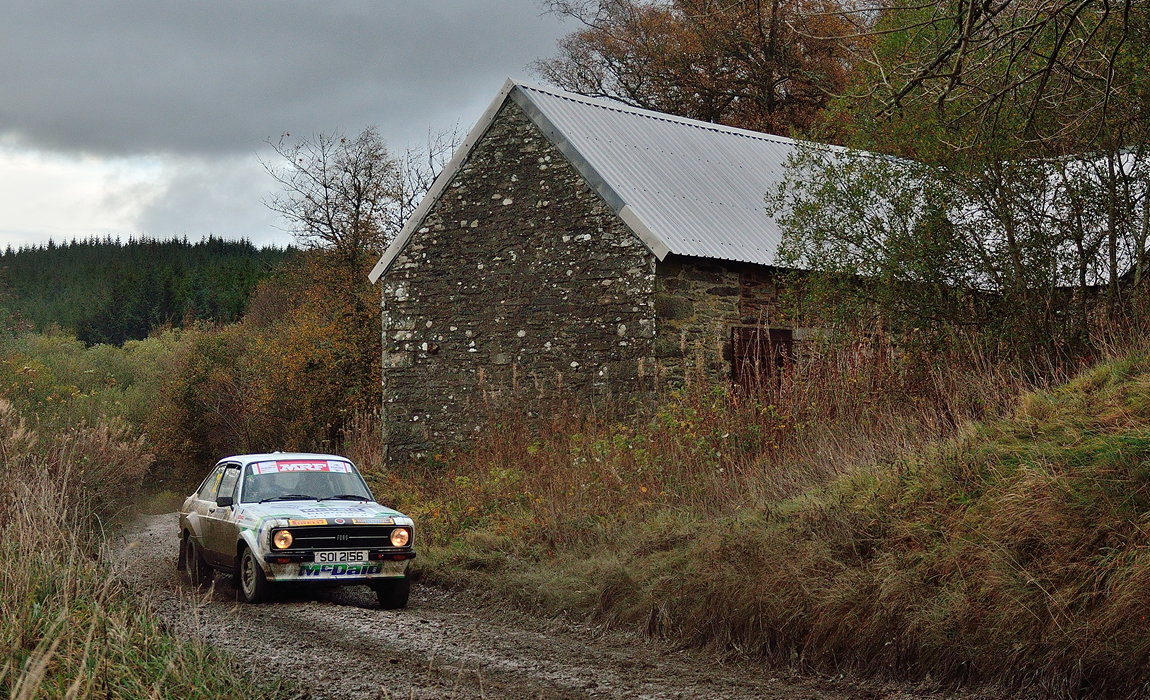 After Yorkshire, Lewis Hooper was leading the standings arriving in North Wales but would be up against it in having to hold off the likes of Pete Gorst and to some extent, Edwards James also (who was mathematically still in with a shot). In a three-way scrap for the BronzeStar title at the Cambrian, the three contenders would also have to keep their eyes on Nigel Jenkins, one who often puts the cat amongst the pigeons and fights for the wins on the rounds that he contests.

However, it wasn’t any of the aforementioned protagonists that opened up the proceedings on the first test through the 6.5 miles of Clocaenog Forest. Instead, it was Dale Glover, who was bringing a welcomed appearance to the stages in an Alfa Romeo Alfasud TI and who stopped the clocks some 6.2 seconds quicker than Jenkins in the Vauxhall Nova. 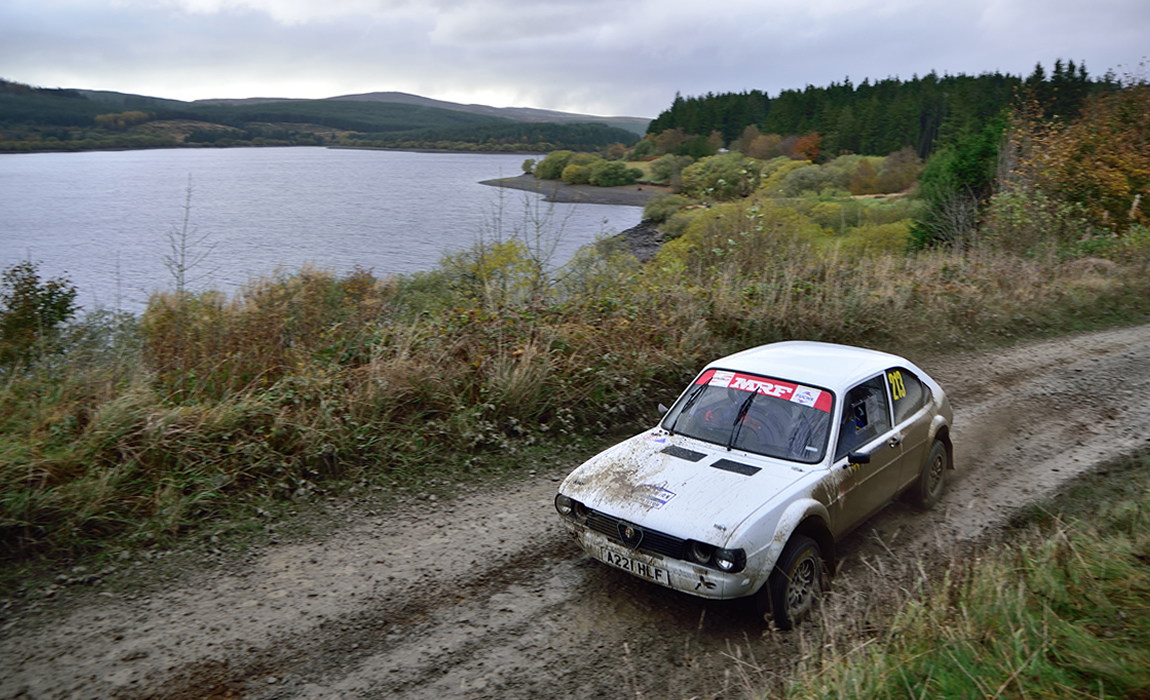 BronzeStar title hopefuls Pete Gorst and Lewis Hooper seemingly got up to speed in the next stage that was on the agenda in Brenig. Here is where Gorst pushed his Vauxhall Nova 4.1 seconds quicker than Hoopers Nissan Micra, and Gorst followed up that fastest stage time in the next one just across the road beside the Alwen Reservoir. 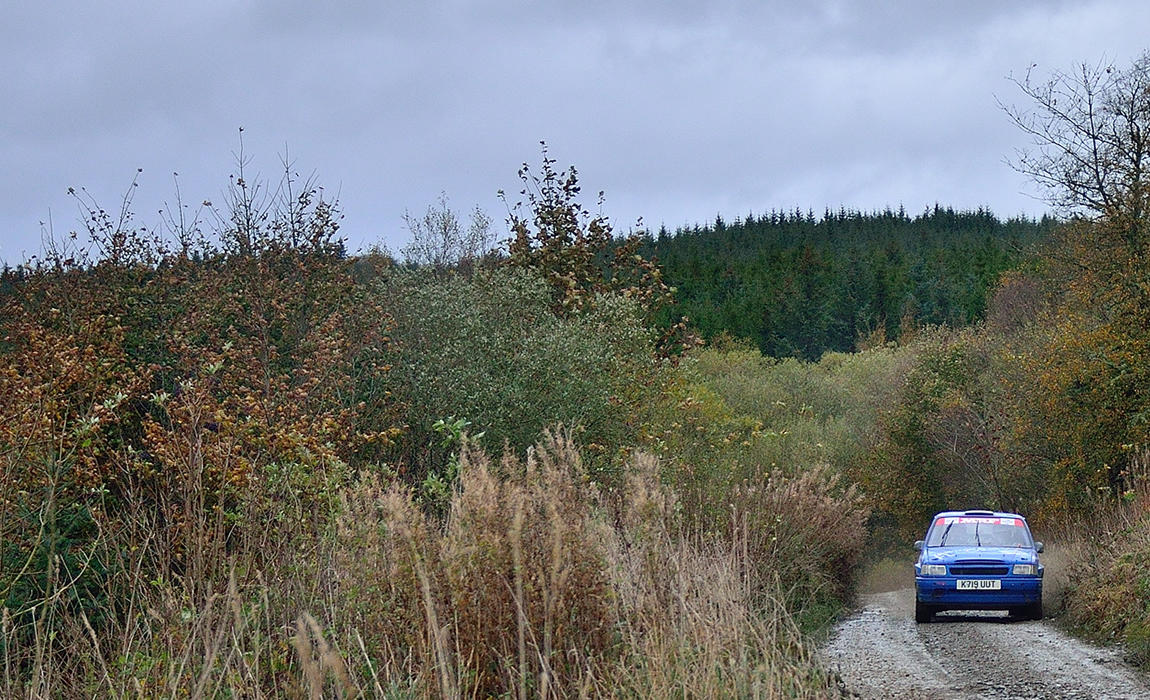 However, that pesky Nigel Jenkins reacted to Gorst and snapped up the final stage win of the morning loop in Penmachno, to head back to service with the slenderest of margins over Gorst. Just 0.6 seconds separated them at the mid-point in the rally, but Gorst who was over 24 seconds ahead of third-placed Lewis Hooper, was on track and halfway there to that BronzeStar title.

Dale Glover, at the wheel of his Alfa, was a repeat offender in Clocaenog and also picked up another in SS7, the second pass of Alwen. But the afternoons’ big push also came from Nigel and Karen Jenkins in their Vauxhall Nova, the pair securing the fastest times in SS6 Brenig 2 and the final stage of the rally in SS8 Penmachno. 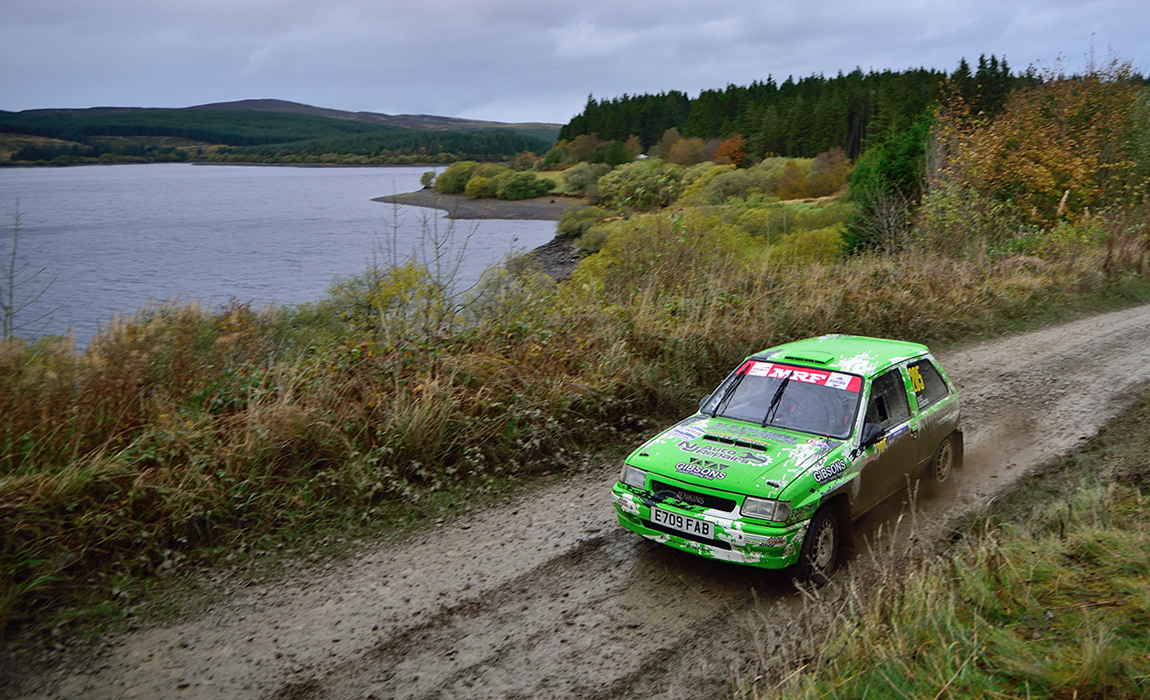 Crossing the finish line back in Llandudno with some 40 odd seconds in hand to the Vauxhall Nova that was being driven by Pete Gorst; although Jenkins had the rally win (their third victory of the season), it was Gorst alongside his Co-Driver Mark Twiname who would be the ones to celebrate. 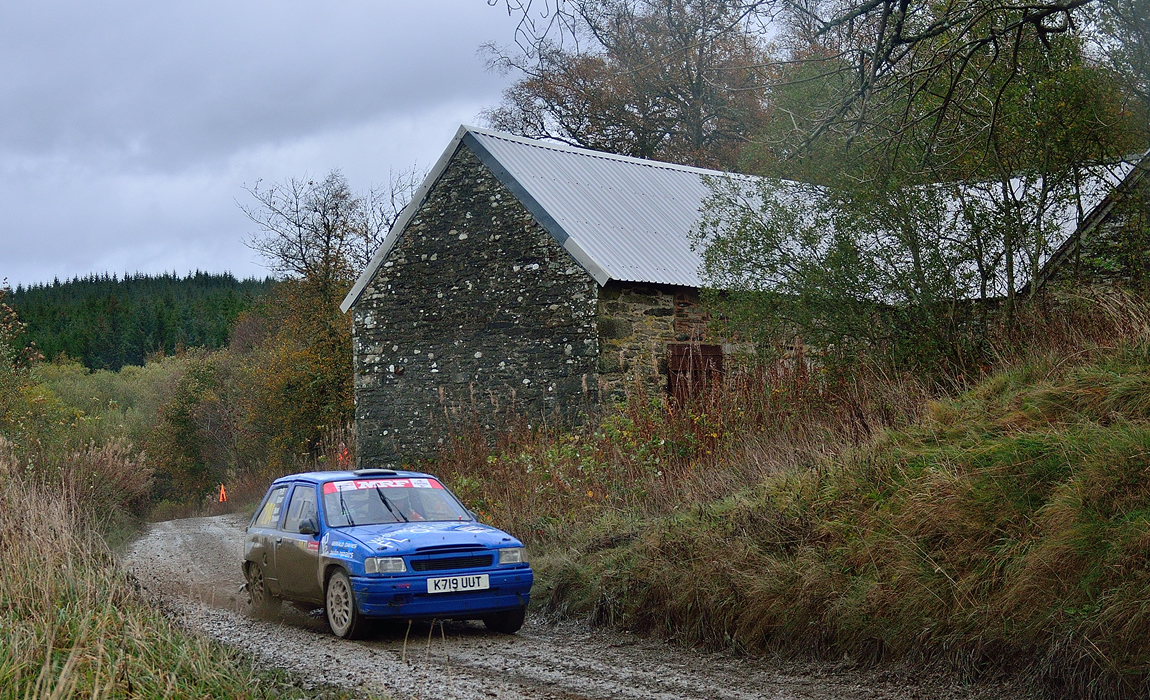 Although Gorst and Twiname were second best on the day, by bringing it home just 2.5 seconds sooner than Lewis Hooper in the Micra, they had secured the 2022 BTRDA BronzeStar title. Hooper and Co-Driver Steven Brown rounded off the podium, also securing the runners-up spot in the BronzeStar standings, ahead of Edward James who finished fourth.

The final historic skirmish of the year would end at the Cambrian in a two-way fight for the Historic Cup and H3 Class titles. After the previous round in Yorkshire, despite Michael McDaid picking up the win, Grant Inglis arrived in North Wales leading the way and was the odds-on favourite to secure the honours. Jonathan Brace who was not making an appearance at the Cambrian had already sewn up the H1/2 class title, despite having only competed on just three rounds this year. 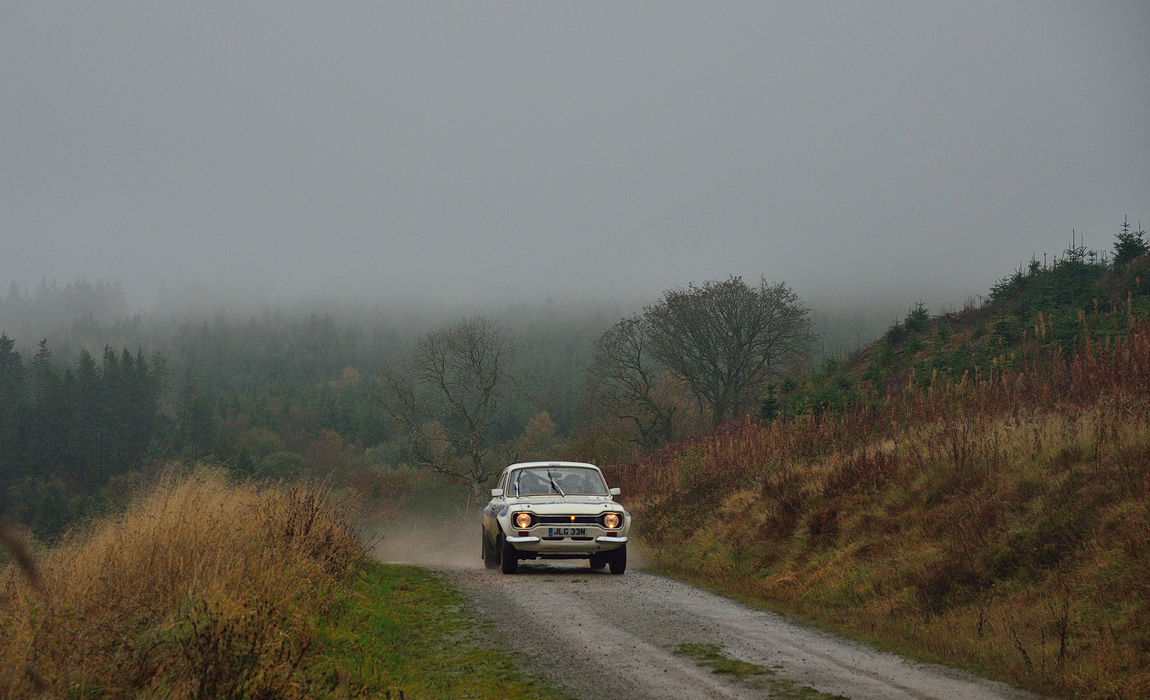 In the H1/2 Class, although Seb Perez in the Porsche 911 Carrera RS won the overall H1/2 class, Perez and Co-Driver Gary McElhinney were not registered in the BTRDA. And so maximum BTRDA points were awarded to Will & Anna Graham who successfully complete the event unchallenged in their Ford Escort RS1600. 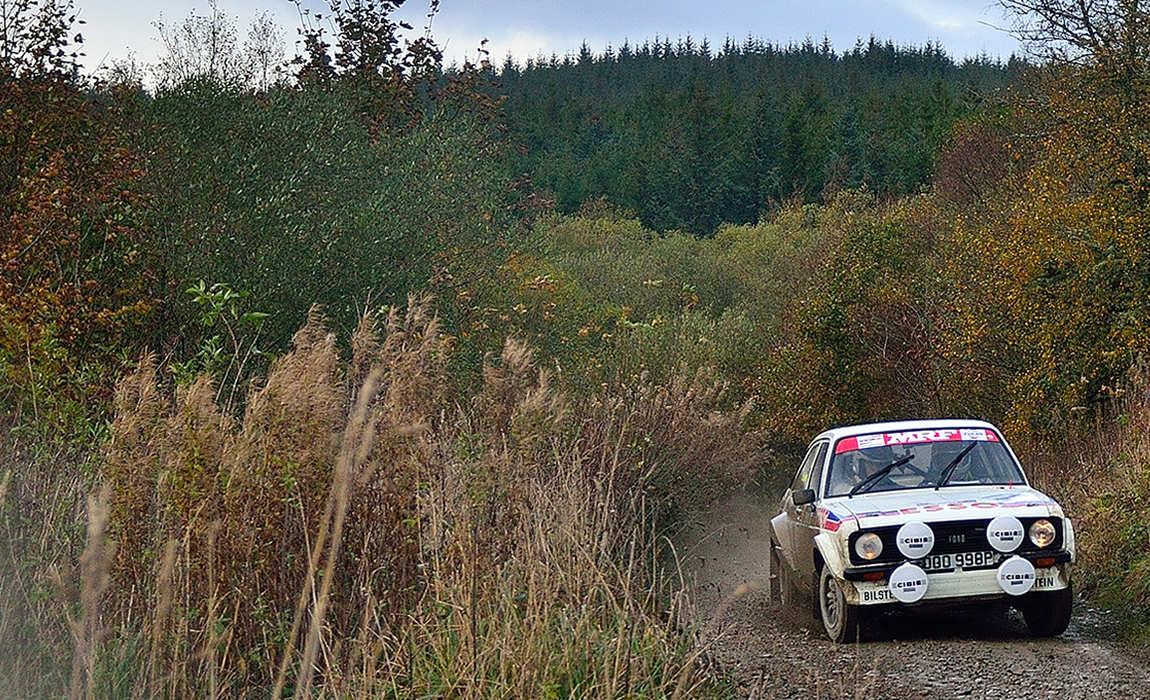 This left the likes of Inglis, McDaid and Lepley to scrap it out amongst themselves on the Northern Welsh gravel for the Historic Cup and H3 class honours. James Lepley alongside Simon Jones in their MK2 Ford Escort would get the better of Micheal McDaid over the morning’s loop of stages. The pair reached the mid-point of the rally with a whopping 54.8-second lead over the Irishman McDaid after having secured 3 out of the 4 fastest stage times in class (SS3 being awarded notional times, due to an accident).

Although McDaid alongside Co-Driver Declan Casey were not leading the Historics, they were, however, leading their Championship rivals, Grant Inglish & Gavin Chisholm who were plodding along in third, a further 50-odd seconds back. Needless to say, at this point in time, Inglis was under no real pressure to fight for the win. Without anything untoward happening, just staying put and ensuring that he brought it home to the end of the rally was all that was required of him to secure the title in North Wales. Throughout the repeated afternoon’s loop, McDaid was able to up his game a bit, scoring the fastest class stage times in SS5 Clocaenog and SS7 Alwen, but that wasn’t going to cut the butter. Even if McDaid would have been able to overhaul Lepley for the rally win, points-wise, it would still not have been enough to steal the title away from Inglis.

James Lepley headed into the final stage in Penmancho with more than 43 seconds in hand over McDaid and would indeed emerge victorious to claim his first BTRDA Historic win at the final of the season. 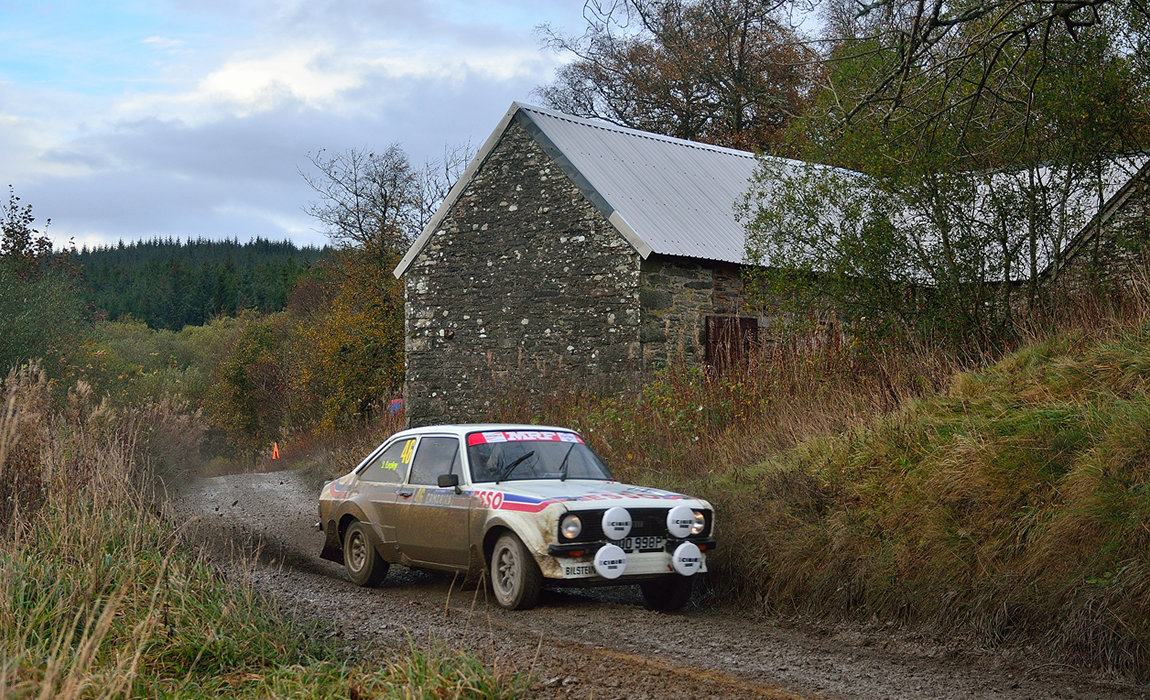 Although Micheal McDaid picked up the final stage win of the season, his efforts were as expected not going to be enough. Rival Grant Inglis alongside Gavin Chisholm followed McDaid back to the finish line in Llandudno, to claim the 2022 BTRDA Historic Cup and H3 Class titles. 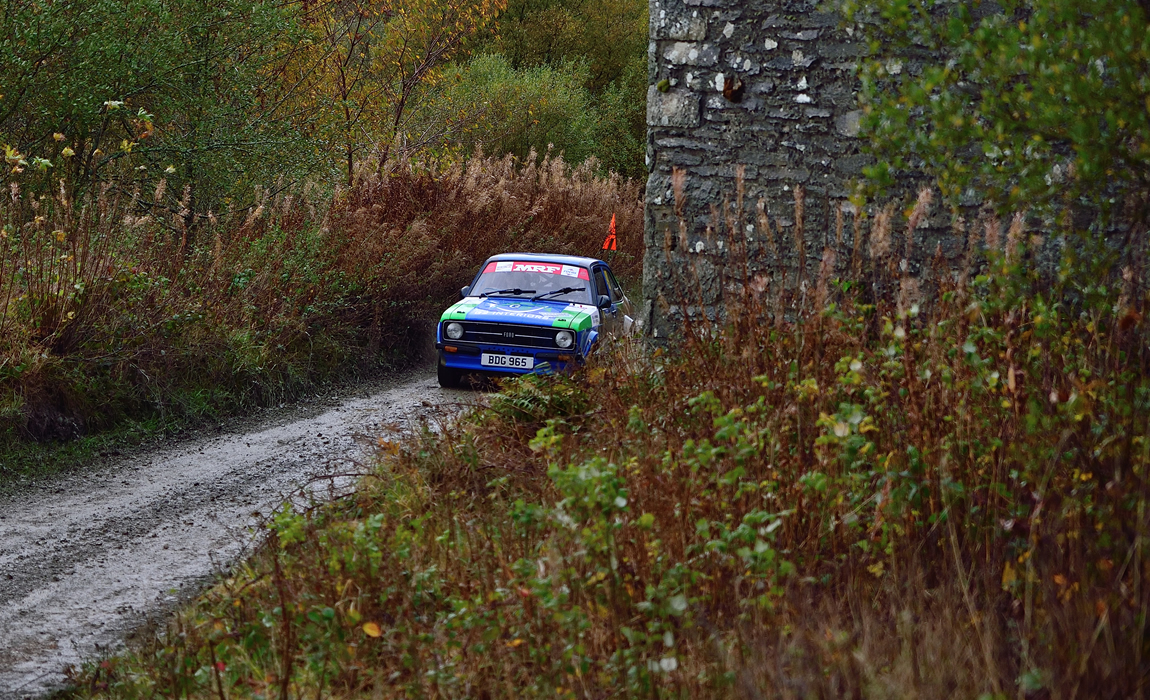