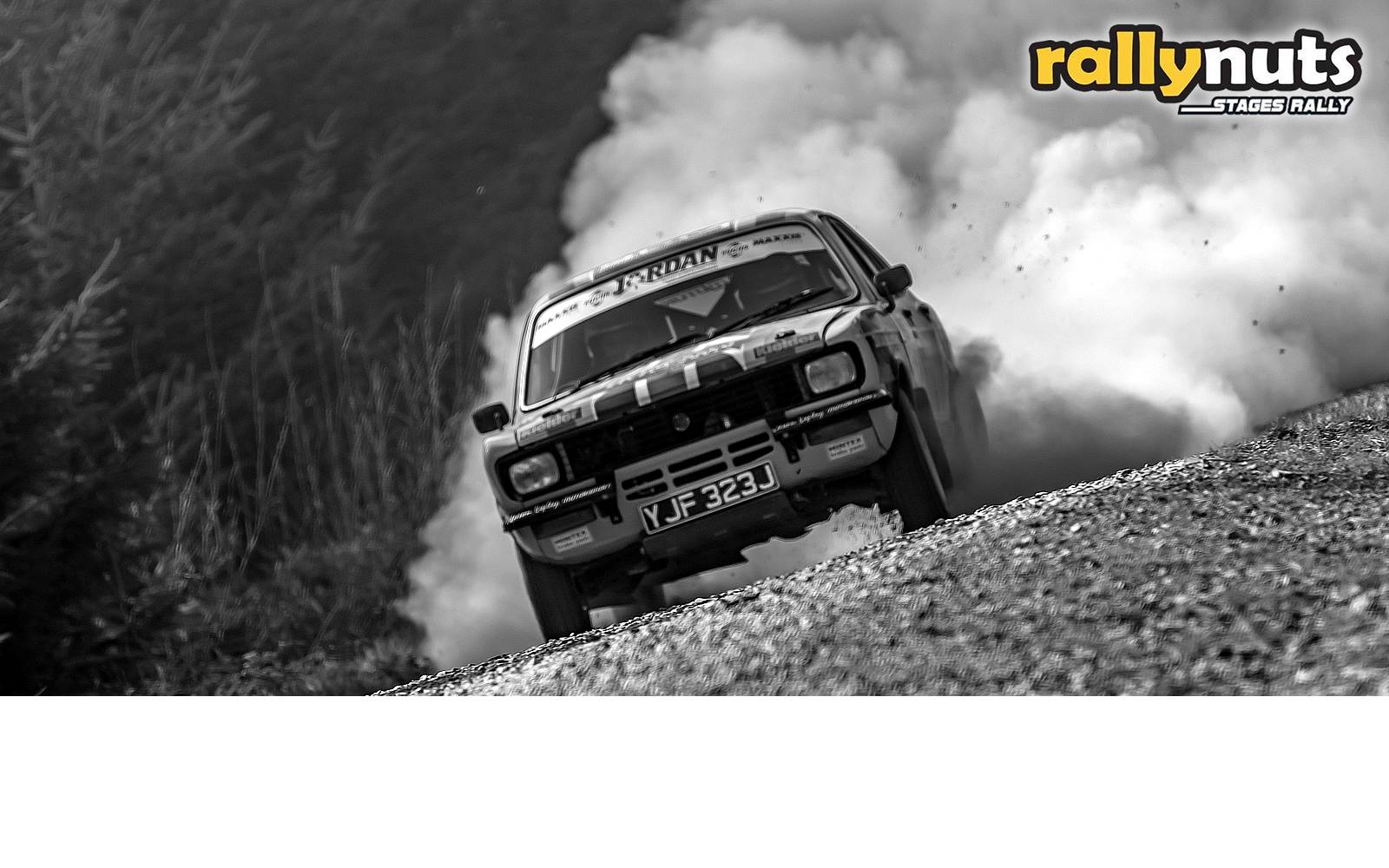 Previously known as the Severn Valley Stages this event started life as a club rally back in the 1970’s which utilized private land and old railway tracks alongside the River Severn. The event organised by the Midland Manor Motor Club has been a part of many rally Championships over the years such as the Audi Sport, Mintex, ANCRO and more recently the BHRC.

Today, along with the Pirelli Motorsport UK Welsh National Championship it is once again back for its second year in the Jordan Road Surfacing BTRDA Rally Series, a Championship which it was a round of for a number of years back in the 1980’s.

Rally Nuts returned as the headline sponsor of the event and this year it moved a little further North into Mid Wales with a new route through Hafren Forest and the Coed Sarnau forest complex, which apart from the odd bit of testing has not been used for competitive stage rallying action since the 1990’s.

135 Competitors entered the Builth Wells based event for Round 3 of both the BTRDA and Welsh National Championships. With approx 44 stage miles spread over six stages, the action kicked off in the dry and dusty conditions, with an opening test in the southern part of Hafren Forest.

Euan Thorburn who had won the first two rounds of the BTRDA set about making it three out of three in his Ford Focus WRC, but on the opening stage, he had to share the stage win with Connor McCloskey who posted an identical time in a newer Ford, an R5+ Fiesta.

For McCloskey and Co-Driver Noel O Sullivan that opening Hafren Stage was to be their best of the day, as by the stop line of the very next stage, Sweet Lamb, they had dropped a number of positions down the timesheets. After suffering from a Turbo issue in the morning they would eventually finish the event in 4th overall which is not a bad result by any means.

Making his first appearance this year in an R5 Fiesta was Northern Irelands Mark Donnelly, along with BTRDA regular Stephen Petch in a WRC Fiesta they both started to show their hands and were putting up more of a fight with Thorburn at the top. Donnelly and Petch would both finish SS2 Sweet Lamb and the following stage SS3 Cwmysgawen with the second and third fastest times respectively, both appeared to up for the fight.

In SS4 Cwncynydd, Charlie Payne would also throw himself into the mix, all be it very briefly with a second fastest time here. However, after fighting brake issues for much of the morning Payne & Co-Driver Carl Williamson would only finish 5th overall after hovering around the top five all day.

Due to Donnelly being a bit slow off the mark in stage 1, it was Petch who was second overall to Thorburn at the midpoint in the rally heading back to Builth Wells for service despite having a small overshoot on SS4.

After service, the crews returned back to the Hafren Forest complex in the afternoon for the final two stages of the event. Thorburn led Petch through the penultimate stage of the day in Maesnant but on the final and longest stage of the rally, SS6 Hafren North, Donnelly snatched second place overall from Petch.

It was disappointing for Petch to lose that second place in the final stage but he would have been relieved to just finally finish a rally with some decent points. Claiming that he was “only really here for the fun“ Donnelly should be pleased with his result, I wonder if we shall see him out for further BTRDA rounds this year?

Despite never driving the car in the dry, Euan Thorburn and Co-Driver Paul Beaton had once again dominated the field to take their third BTRDA win of the year with a 59-second lead, which is pretty impressive after taking a year out from rallying.

Thorburn maintains his 100% winning ways and stretches out his lead in the BTRDA Gold Star even further ahead of Scott Faulkner. I know that this is only round 3 of the Championship but are we already looking at our 2019 Gold Star Champs?

In the BTRDA Silverstar, it was a similar repeated story from the young gun George Lepley. Already with two impressive rally results under his belt this year, he was back out in the BRM Avenger; but this time with a freshly built engine that was putting out a few more ponies.

Despite fighting with a diff problem all day which made the car drive more like a one-wheel drive car, it was another impressive performance taking the BTRDA Silverstar win, 1st overall 2WD, 1st Historic, the Junior award and finishing 13th overall on the event.

Finishing 15th overall, behind Lepley & Co-Driver Tom Woodburn, in the second spot on the Silverstar podium and second in the H3 class was Ben Friend and Cliff Simmons in their MK2 Escort. Friend along with Tom Llewellin (also in a MK2 Escort) had a tough battle with Lepley in the Historic class all day.

Although Friend posted the fastest stage times on half of the days’ stages it was the last two of the day where Lepley reeled him and Llewellin in with two storming stage times. Llewellin and Co-Driver Ross Whitlock finished 18th overall and 3rd in the H3 Class, Llewellin is now also tied for the lead of the Welsh National Championships standings.

Lepley extends his lead even further in the BTRDA Silver Star Championship over second-place Perry Gardner who won the R2 Class in his Ford Fiesta R2 alongside Keaton Williams in the Co-Drivers seat.

On the 1400’s front, it was another successful day out in the MG ZR S1400 for Callum Black and Michael Gilbey, they took their second win of the year following on from their win last time out in the BTRDA on The Malcolm Wilson Rally.

But that wasn’t without a fight from The RD1 Cambrian Rally winners Chris Powell & Jim Lewis in the Talbot Sunbeam. Powell was fastest out of the blocks winning the opening stage of the day in Hafren but that was enough to provoke Callum into action who beat him on every stage then on to take the overall 1400’s win.

Powell now sits at the top of the Fuchs Lubricants BTRDA 1400 overall drivers Championship ahead of Steve Black who finished the event third 1400 in his Suzuki Swift.

Although Callum Black has now won two out of three rounds of the BTRDA, he only moves up into 7th due to his first-round DNF on the Cambrian. He also takes maximum points in the 2WD Welsh National where Tom Llewellin continues to lead ahead of Chris Powell.

Taking a look at the top Pirelli Motorsport UK Welsh Forest Rally Championship runners now and winners last time out on Rally North Wales, Mathew Hirst & Declan Dear, kicked things off in their Mitsubishi EVO IX with the first stage win of the day in Hafren.

Hurst who had never driven these stages before extended his early lead in SS2 Sweet Lamb, but Scott Faulkner & Gareth Parry who were also in an EVO, were only a few seconds behind him and after the next two stages were showing signs of challenging for the win.

Whilst the battle for the Welsh lead was playing out between the EVO’s, the Mitsubishi Mirage of Graham Middleton and Steven McPhee held the position for third throughout the day. Whilst getting to grips with the R5 machine on the loose they finished 11th overall and scored the third-place points in the Welsh.

On the penultimate stage of the day, SS5 Maesnant, the battle for the Welsh win would start to take a number of twist and turns. Faulkner’s assault would fall away after picking up a puncture on their Group N EVO, dropping them down to 6th overall and handing Hirst the win? …………….or so everyone thought!

Unbelievably on the penultimate corner of the very last stage of the rally Hirst would spin, handing the win to Faulkner by the slimmest of margins. This win pushes Faulkner up to third overall in the Welsh Championship standings behind joint leaders Hirst & Llewellin who are both tied at the top on 62 points. Faulkner and Co-Driver Parry also take the BTRDA NR4 Class win.

The next round of both the BTRDA & Welsh returns for the Plains rally in May and is once again on classic Mid Wales gravel stages.