Returning to the British Rally Championship for the first time since 2014 as the second round of the 2022 season, the iconic Jim Clark Rally was to once again offer up an immense closed road stage rally in the Scottish Borders. A firm favourite among the rallying fraternity, the Duns based event has been a prominent feature of the BRC calendar since its debut in the series in 1999. Finally, it returned to the forefront for today’s crop of drivers to continue on in their battle, following the season opener in Clacton the previous month where Welshman Osian Pryce emerged victorious. 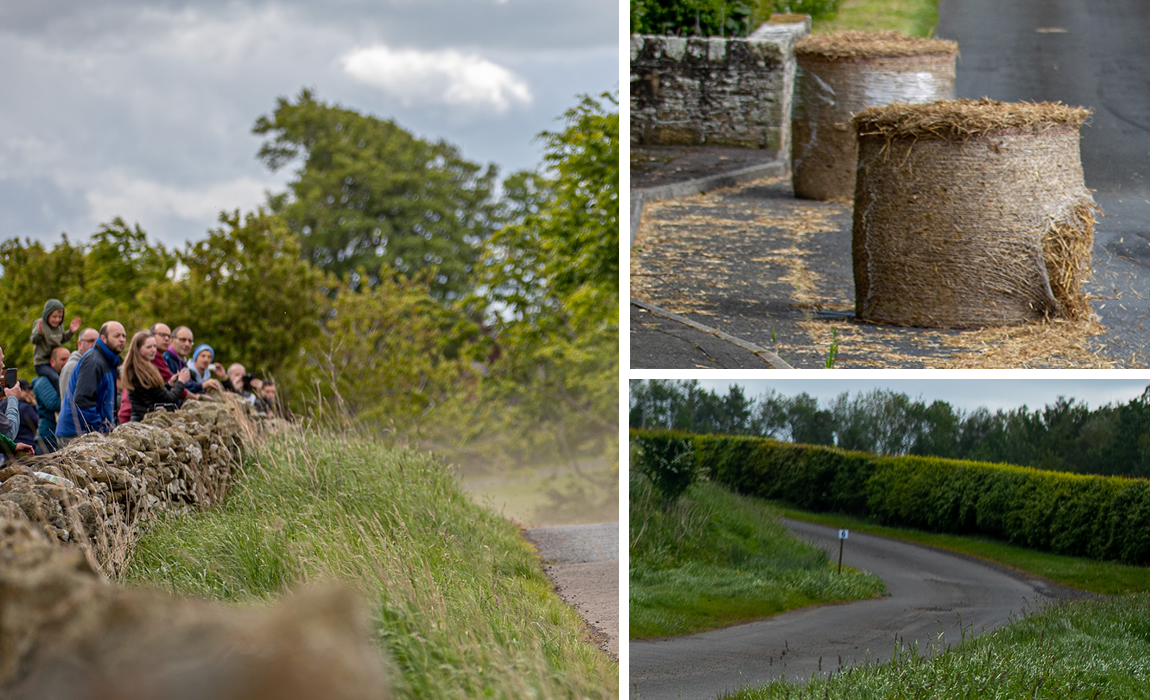 Featuring nine tough challenging tarmac tests which covered some 70-plus miles, the event would get underway on Friday evening with two runs through the opening Longformacus test at 11 miles in length. Just fifteen registered BRC crews (across classes) appeared on the start list and were to be led away by the Championship leader, Welshman Osian Pryce in the Melvyn Evans Motorsport run VW Polo GTI R5.

It was however an Irishman, Kieth Cronin (also in a VW Polo GTI R5) who would be the one that would be off to a lightning-fast start. Posting a blisteringly fast opening stage time that was over 7 seconds faster than Pryce, the four times BRC winner of the past had laid down the challenge right from the get-go. 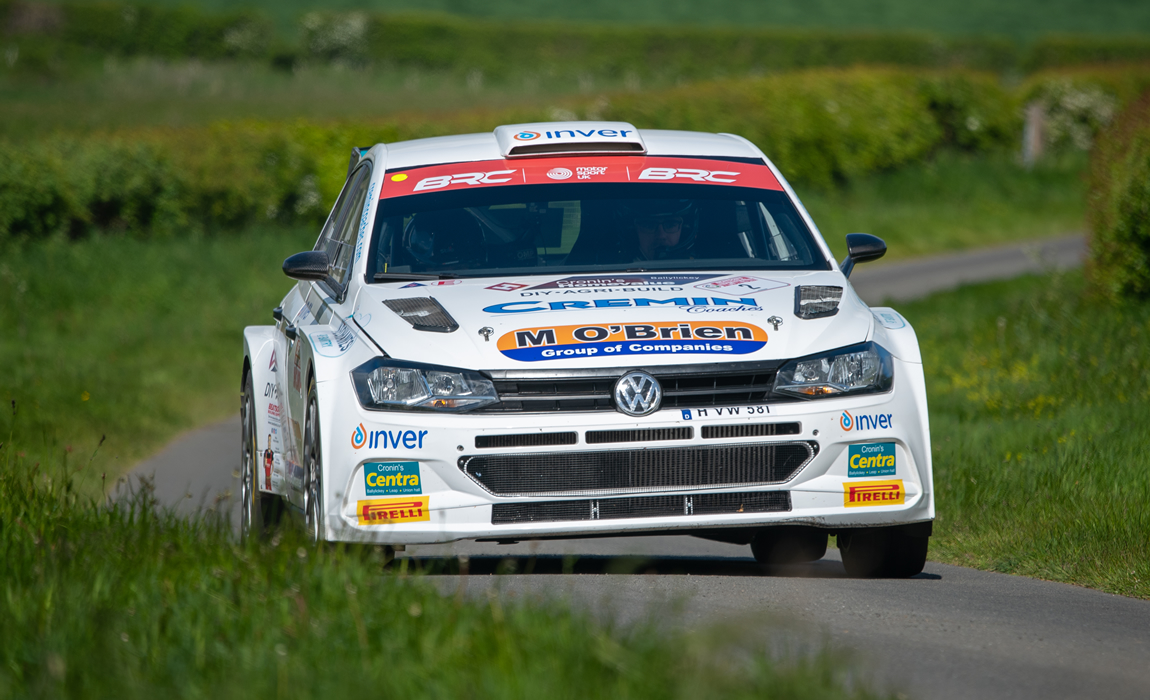 After a short dip into the service, the crews returned back to tackle the stage once again, but in the darkness, Pryce would pick up a puncture early on into the stage. At the stop line of the stage, Pryce admitted that it came only 4 miles in, unfortunately, the rules of the event stipulated that a competitor must stop in the event of a puncture. This regulation violation, unfortunately, resulted in the exclusion of Pryce and Co-Driver Noel O’Sullivan from the event. 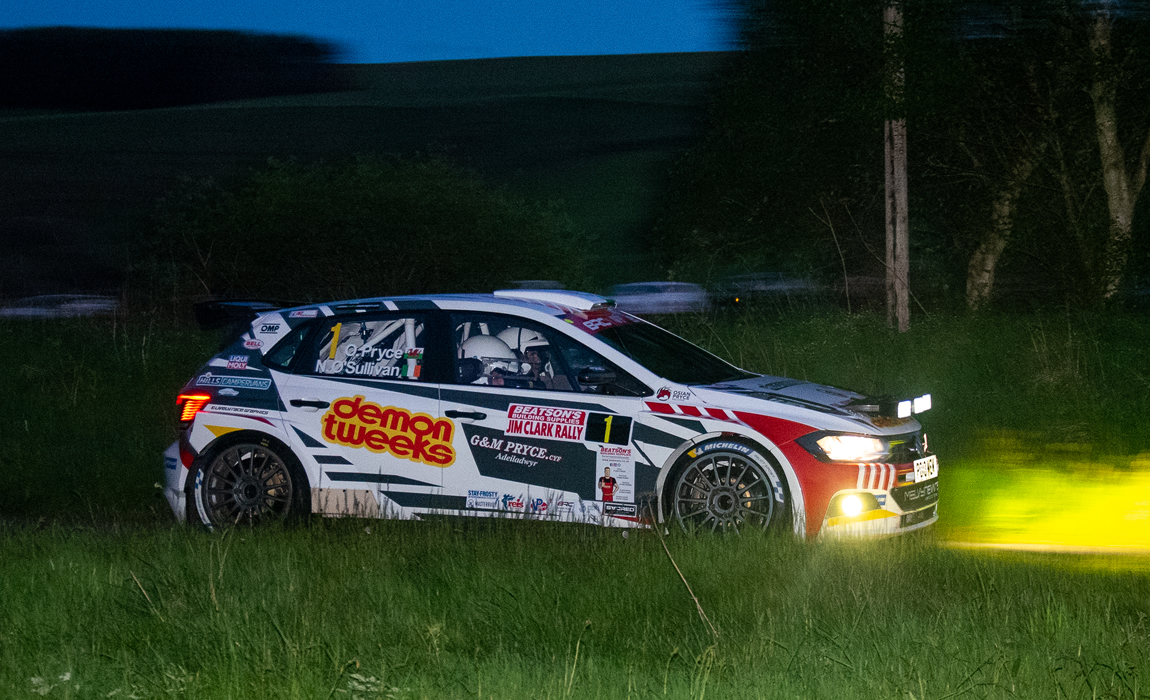 Cronin who had made the switch from Hankook to Pirelli tyres for this event raised the bar even further in the second run of the stage by going some twenty seconds quicker in the darkness. This coupled with Pryce’s exit left Cronin leading James Williams in the Hyundai i20 R5 by a whopping 40 seconds heading into the overnight halt.

Meanwhile, in the Juniors Round 1 runner-up Eamonn Kelly was leading Kyle White with a sizeable 17 seconds advantage already. Although White gained 2 seconds on Kelly in the opening test of the rally, White then made a mistake in the second run where towards the end of the stage on a muddy section, he took a fence out along the way. This lost him some time and thus Kelly was the overnight JBRC leader. 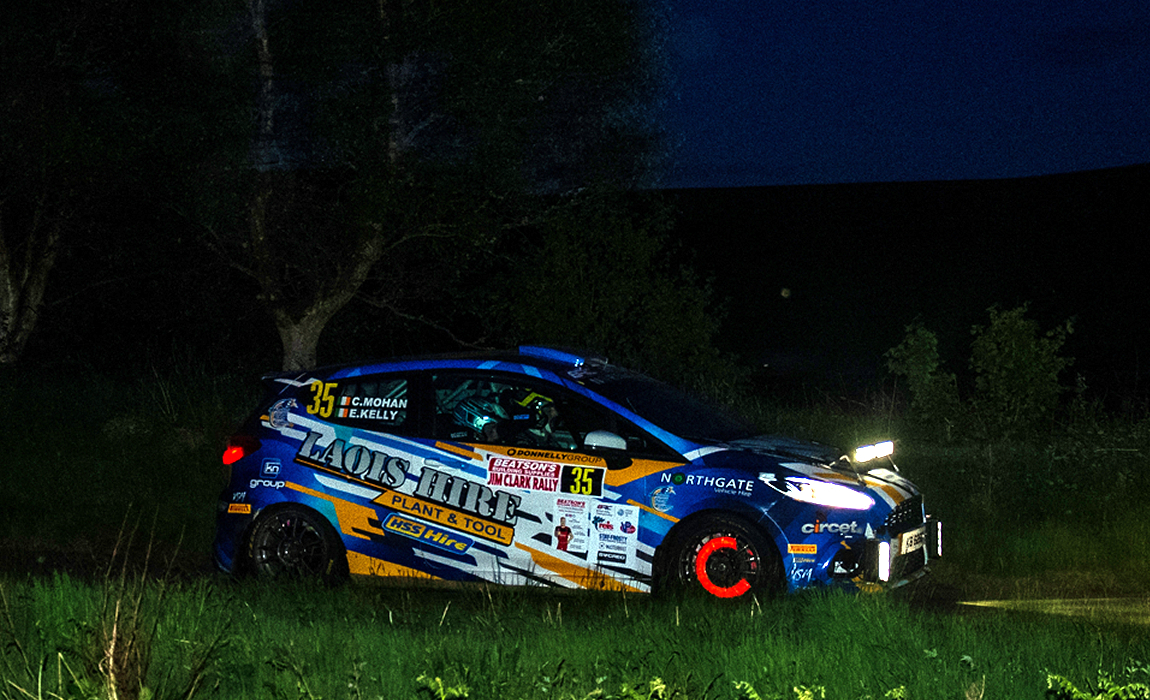 The next day resumed with a 6-mile test, Westruther but a number of crews beat the stage boogie time. The following test, SS4 Scott’s View was in the same region in length and here is where the rally leader Keith Cronin could continue to build on that huge lead from the previous nights efforts. Cronin took the outright stage win beating the Hyundai i20 R5 car of second-place James Williams by half a second.

Merion Evans was able to gain 4th place overall from Elliot Payne whose brakes went off; However, further notational times were to be applied to a number of competitors including White and Mollan in the JBRC after a stage stoppage. 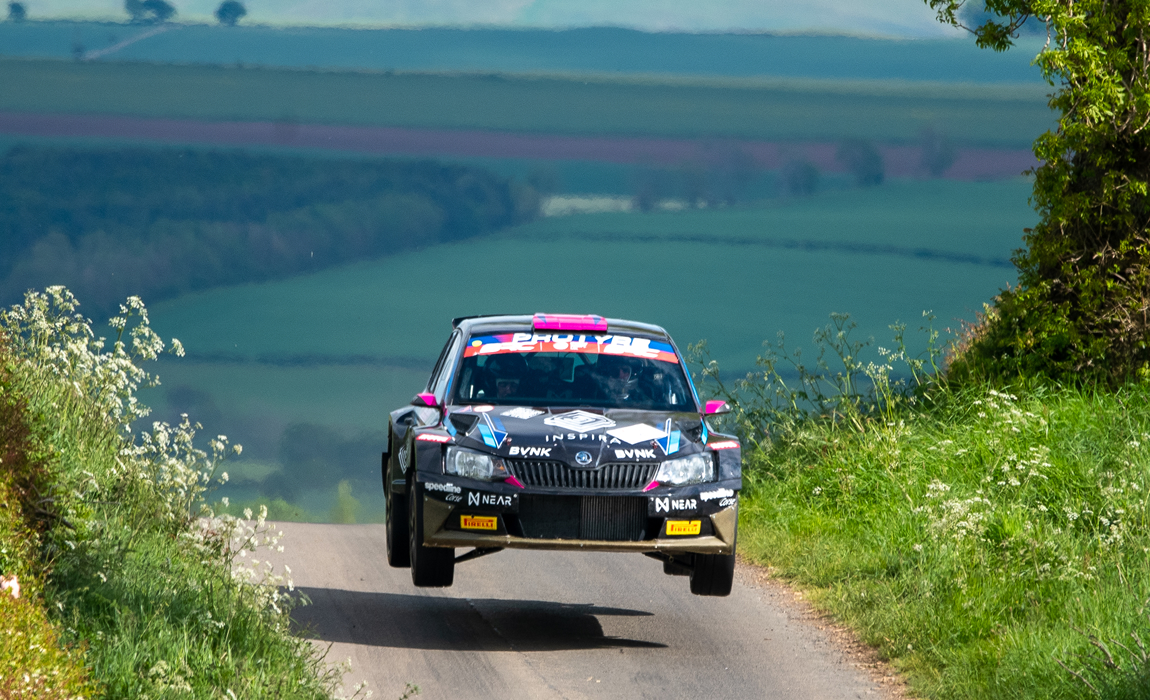 The first 8.75mile run through Eccles was the last stage of the morning’s loop before the mid day service halt and here is where Ruairi Bell was the first to break Cronin’s run of stage wins.

Bell in the Skoda Fabia R5 had a super run, securing not only the fastest stage time by 2.2 seconds to James Williams, but he had also secured his maiden BRC stage win. 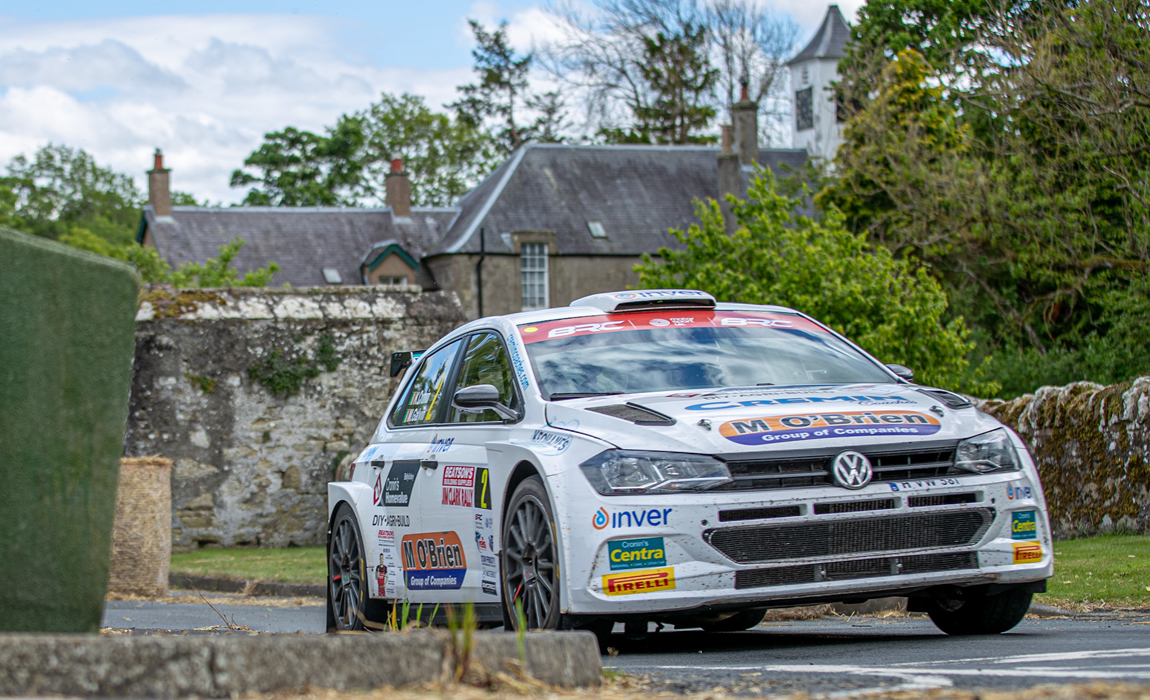 Rally leader Cronin was 5th fastest but the Irishman was still heading into the Duns service halt with a commanding 40.6 seconds lead over Williams. Cronin attributed his efforts thus far to not only the change in tyre manufacturers but also the work on the setup of the VW Polo GTI that had been done since the opening round in Clacton.

Kyle White secured his second stage win in the JBRC through SS5 Eccles 1 before heading into service but Kelly was still some 26 seconds out front following his super stage time in the darkness the previous night. Johnnie Mulholland was laying in third but was struggling to match the pace of the guys in front. 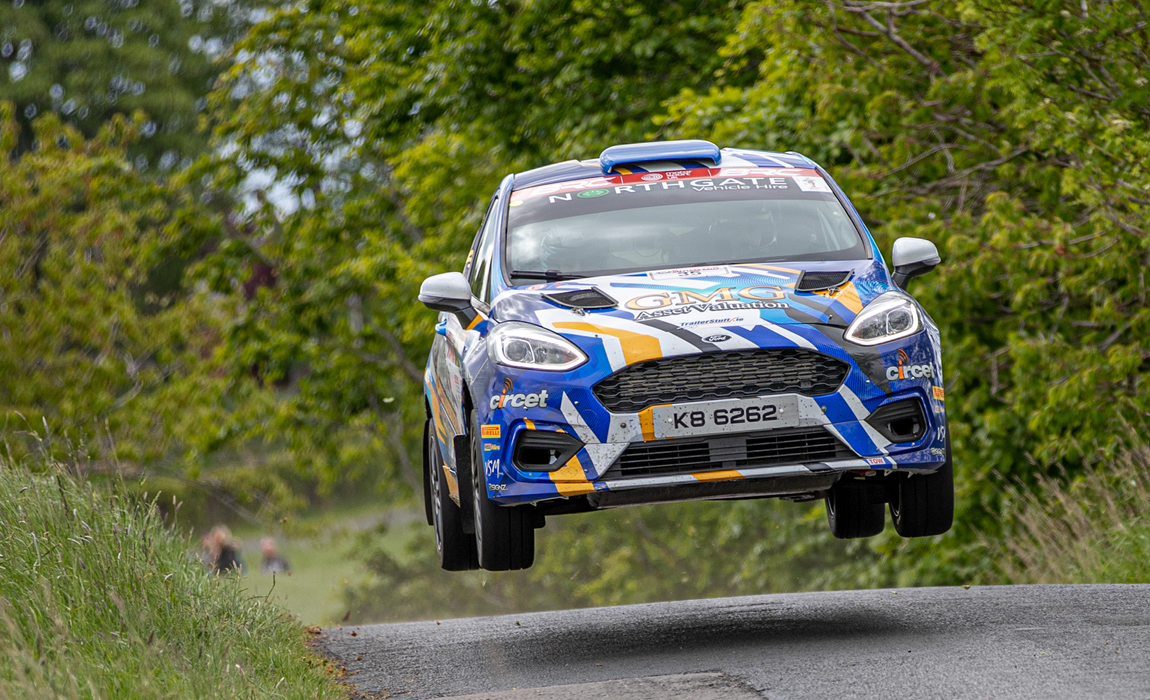 The afternoon’s action was supposed to consist of a further four stages which were all repeated runs. However, SS6 the second run through the Westruther test was cancelled and boogie times were beating on SS7 Scott’s View by a number of crews. This left only two runs through the Eccles test and Keith Cronin baring any mishaps was perhaps already home and dry by this point in the rally.

James Williams peddled his Hyundai i20 R5 car through the penultimate test of the rally the quickest to pick up his first stage win and to reduce the gap to Cronin down to some 36-seconds.

Unfortunately, the final planned pass of this test was also caned; which meant that Kieth Cronin alongside Co-Driver Mikie Galvin took the victory and had Conquered The Jim Clark. By taking the maximum points at the second round, Irishman Cronin had also placed himself firmly at the top of the standings taking the lead of the Championship whilst his nearest rival Osian Pryce left the event empty-handed. 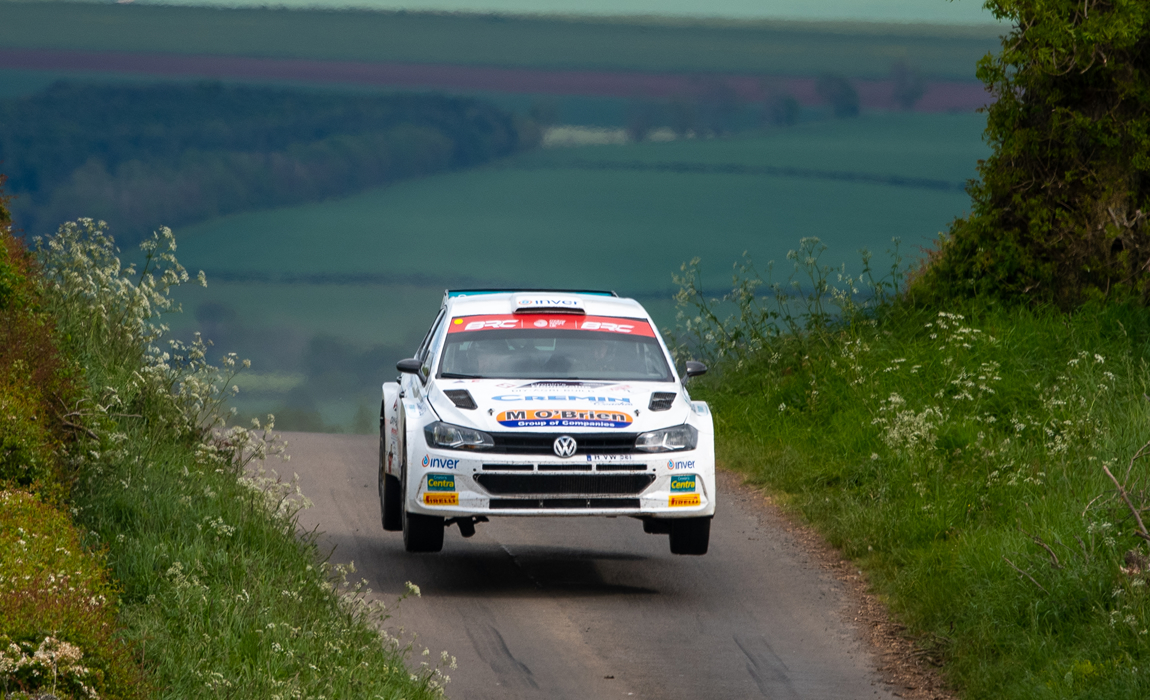 “It’s great, It’s nice to get on well in the BRC again, last year didn’t go 100% for us. The pace was good in Clacton and we started really well here, so it was a case of managing the lead.” “A bit of an anti-climax not getting to do the last stage, but it’s nice to come out here and get the win.”

Second place man James Williams alongside Dai Roberts calling the notes appeared a little relieved that the final stage would not happen. Having lost all boost to his Hyundai i20 R5 on the previous stage; at the stop line of SS8 he said “Over the moon, but my heart was in my mouth on that stage”. For only their second outing in the car to fish second on the podium is an outstanding result for the pair and shows that they have good pace. 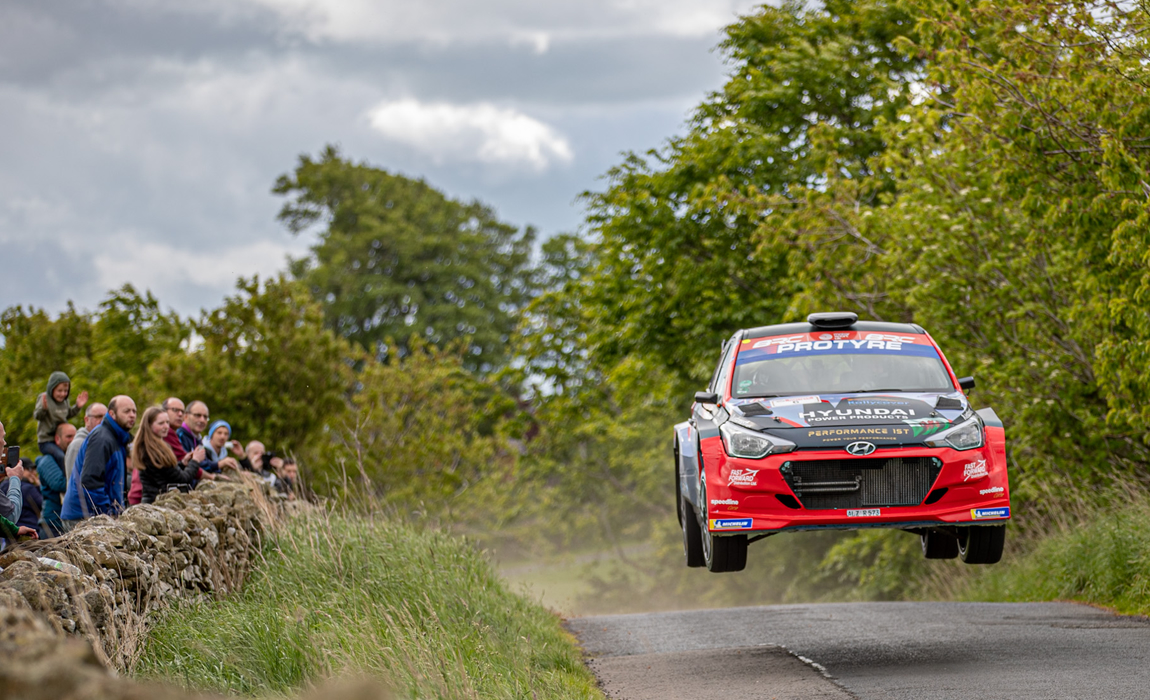 Rounding off the third spot on the podium was Scotsman Garry Pearson alongside Dale Furniss in their Ford Fiesta Rally 2 car. After their DNF at the opening round in Clacton, to score a podium finish on his home event, Pearson was “absolutely delighted with the result”. 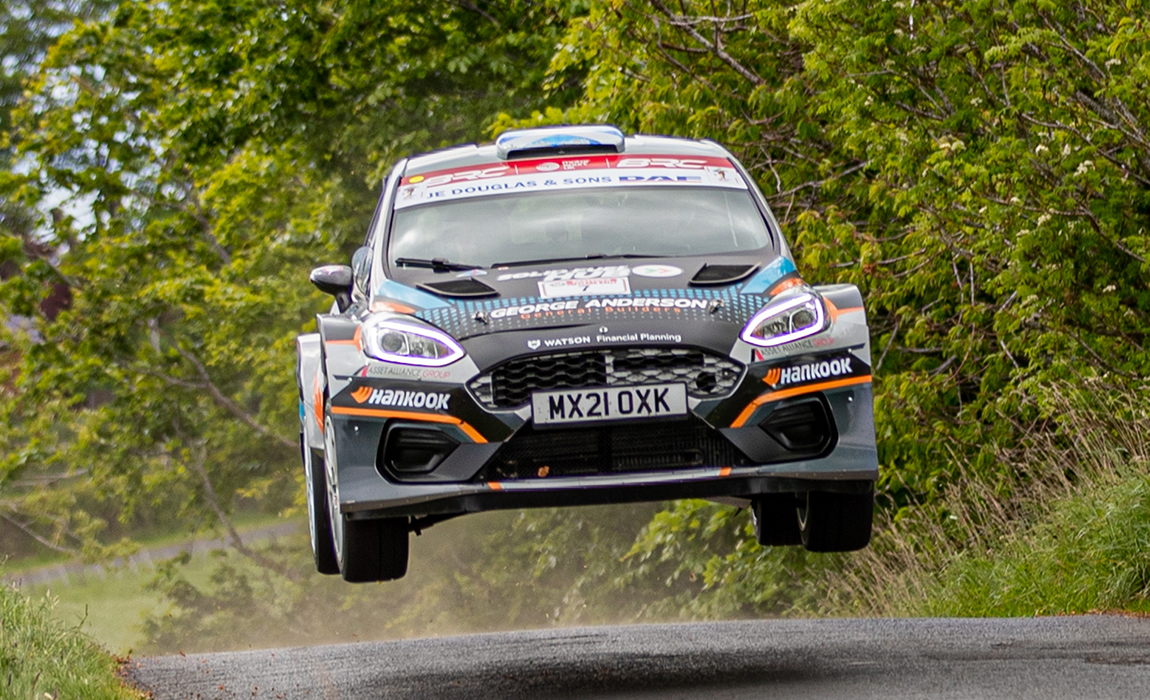 In the Juniors, Irish lad Eammon Kelly in his Rally4 Ford Fiesta with Conor Mohan besides him calling the notes continued to get the better of Kyle White in the Peugeot 208 Rally 4 over the course of the afternoon’s action. He ended the rally with a 30.6 seconds advantage to score his first JBRC victory of the season. 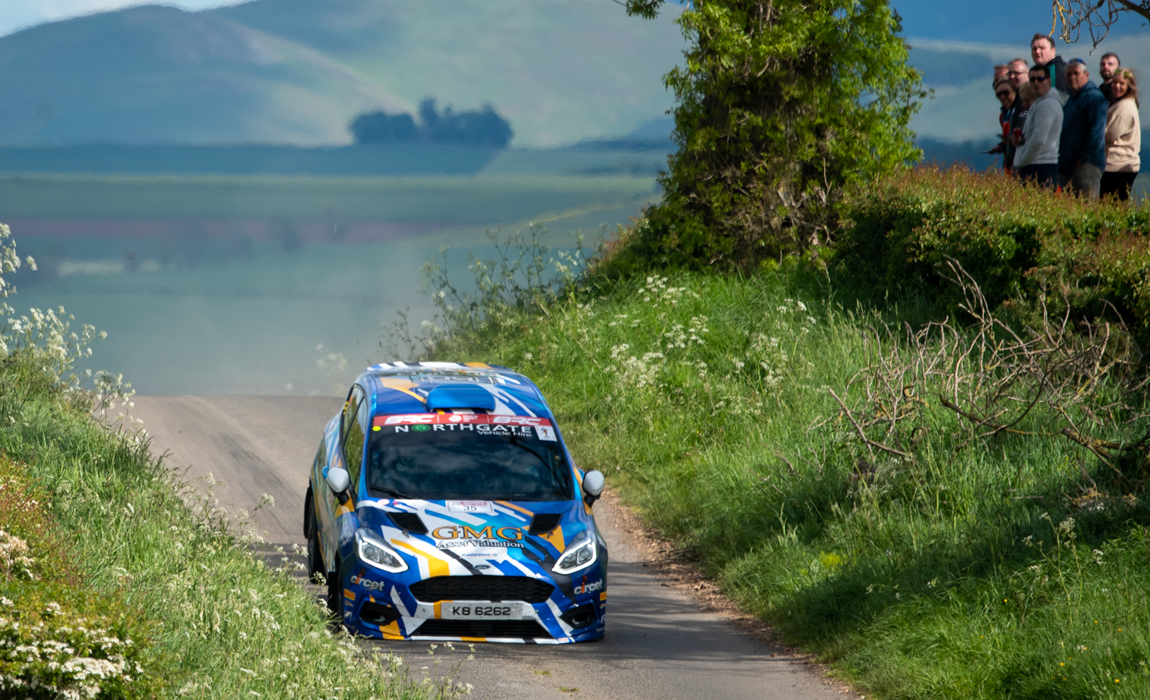 Delighted, we said after Clacton that we’d come back stronger and we put in a good effort into this rally. Playing the joker was the plan and we stuck to it and it really really played off, Excellent rally!”

“You can never back off even in the last stage, Its class! That’s what you want, on stages like this, you want to be pushed and that’s where you get the thrill from”.

Alan Carmichael alongside Co-Driver Arthur Kierans in their Hyundai i20 R5 was the only National crew to finish the event after Craig Jones retired his Ford Fiesta in the morning before reaching service. 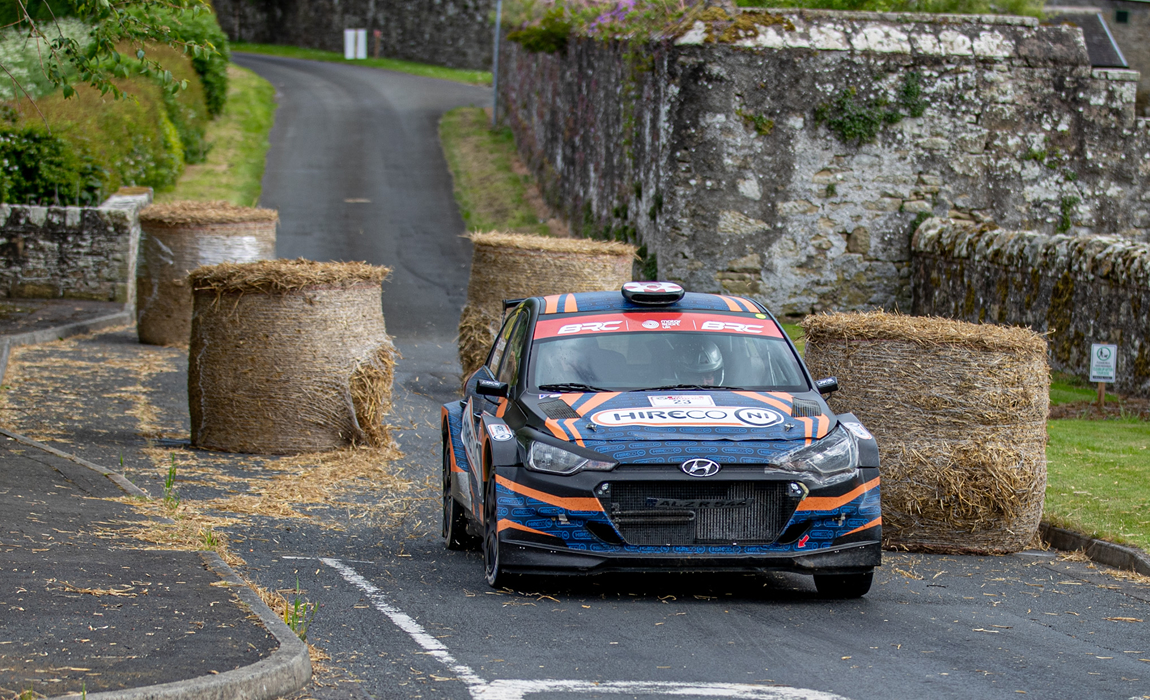 Keith Cronin now leads James Williams in the standings by 10 points; after his exclusion from the Jim Clark, Osian Pryce now drops to third overall.

Eamonn Kelly takes over the top spot for the Juniors after playing his joker, he leads Kyle White by 15 points. Despite his DNF this time out, Craig Jones still leads the National by 5 points thanks to his Joker that he played on the opening round in Clacton.

The British Rally Championship will relocate to Builth Wells in Wales next for Round 3 and it will be onto the Gravel for the first time this year at the Nicky Grist Stages (9th July). Here the crews will face 8 gravel tests on both MOD land and in the Crcychan and Halfway Forest complexes.